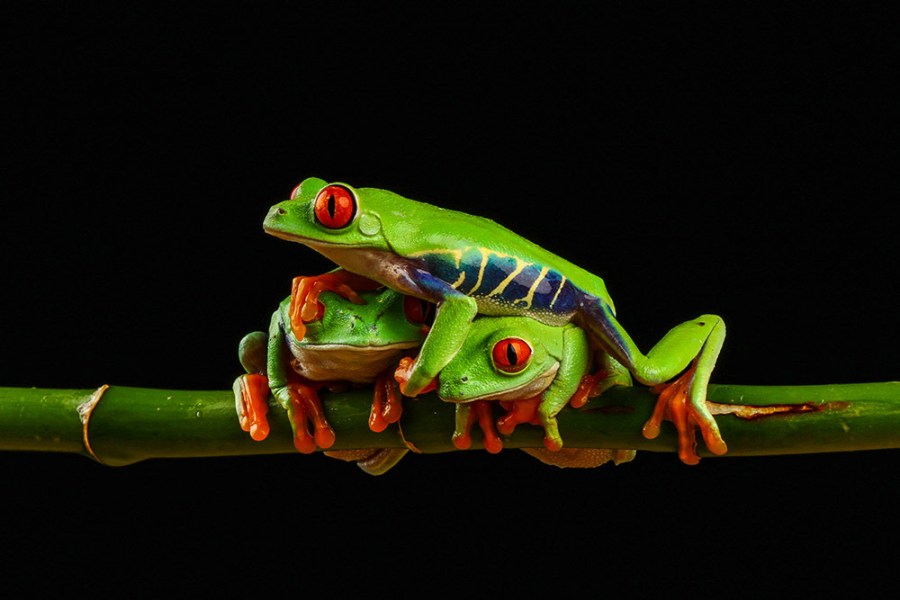 Here are the winners and top ten images uploaded to Photocrowd from Round Six, Close-ups, with comments by the AP team and our guest judge

Fit a macro lens to your camera, and you open up a whole new world of wonderment. Studying your surroundings in detail, looking for a subject, setting up the camera and homing in on the minutiae of our planet is an almost meditative process. It’s easy to see why so many photographers are so passionate about it.

However, it can be a genre where technique sometimes overtakes artistry. A successful macro shot has to be more than a close-up of an insect on a leaf, taken in the sort of flat conditions that shows off every possible detail. While these images have their place, we need more than that. We are looking for creative use of depth of field, gorgeous light, softness where appropriate – and, conversely, ultra-sharpness where appropriate. Basically, anything that lifts the image out of the realm of record shot. As always, the entrants to the close-ups round didn’t disappoint. See the winners and top ten below… 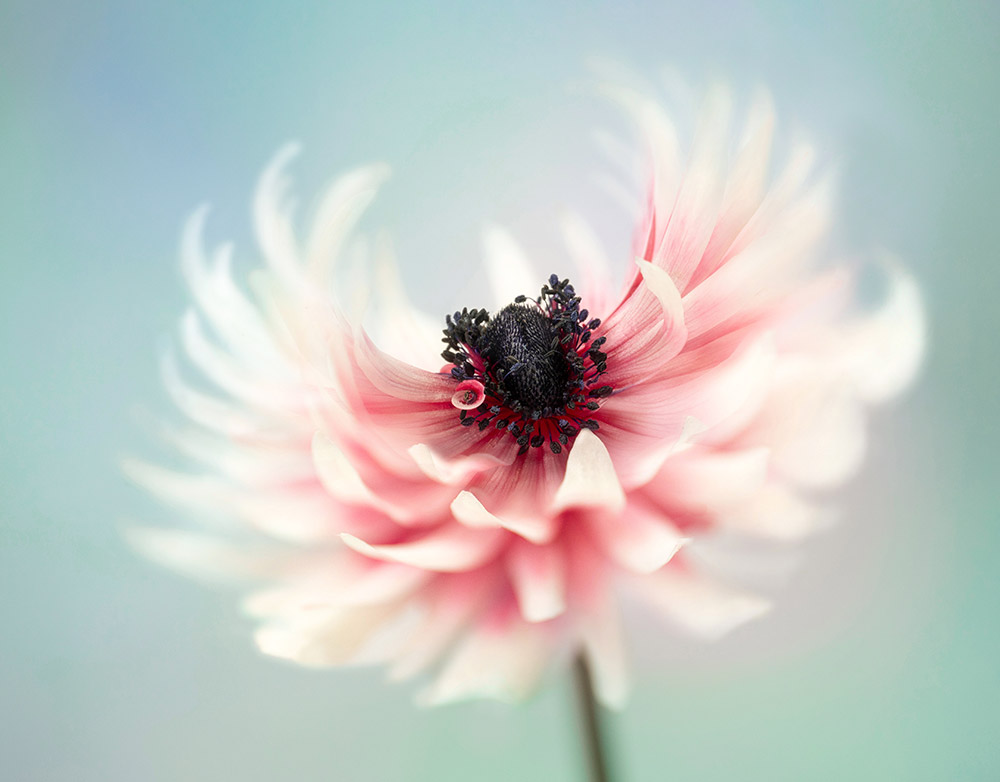 Guest judge Tracy Calder says: ‘There’s something truly celebratory about this picture – the petals reach upwards with such force and energy, and yet there is an unmistakable delicacy about the flower. Having grown the anemone herself, the photographer will probably have kept an eye on its progress and planned the shot for when it was at its fullest expression.

‘Choosing to combine multiple exposures has worked wonderfully here – the focus in the centre of the flower (achieved with a narrow aperture of f/13) is perfect and the softness of the petals, fanning out like a ballerina skirt (achieved with a wide aperture of f/2.8) is dreamy. It’s a fabulous combination and has been handled brilliantly.

‘The colour combination between flower and background is also spot on – the photographer clearly has a wonderful understanding of colour theory and has used it to full effect. The viewer’s eye is drawn to all the right places in the right order. It’s absolutely beautiful.’

Some of the best photography isn’t a literal representation of a subject. In many cases, the success of an image is down to what it isn’t. In Angi’s example, what we have is two cyclamen buds unfurling and forming a heart shape, but what it could represent is a pair of swans with their necks intertwined, or two ballerinas in a performance.

It’s an image that transports the viewer beyond the obvious interpretation, and that’s hard to do. The shallow depth of field enhances the impressionistic feel, with the soft, out-of-focus areas ensuring our eye goes exactly where it’s supposed to. It’s a subtle, clever image, beautifully executed. 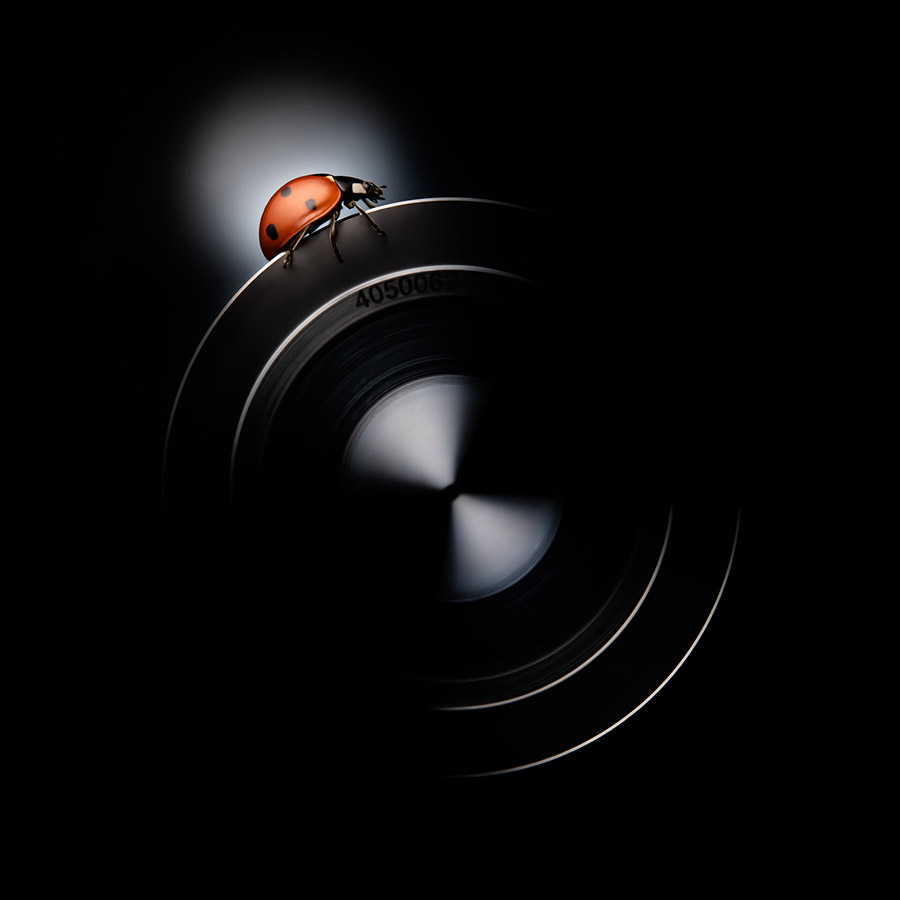 Adam’s slick composite stands out for its sheer difference from the vast majority of other entries to this round. He calls it ‘Spot On’ and its aim is to demonstrate the difficulties insects face in our highly developed technological world.

The boldness of the approach is hard to fault. Restricting the tones to almost pure black, barring a few highlight areas, means attention is instantly drawn to the glossy red of the ladybird with its black spots. The lighting technique is excellent, bringing out the glossiness of the metal, which gives
the image depth. Strong in concept and execution. 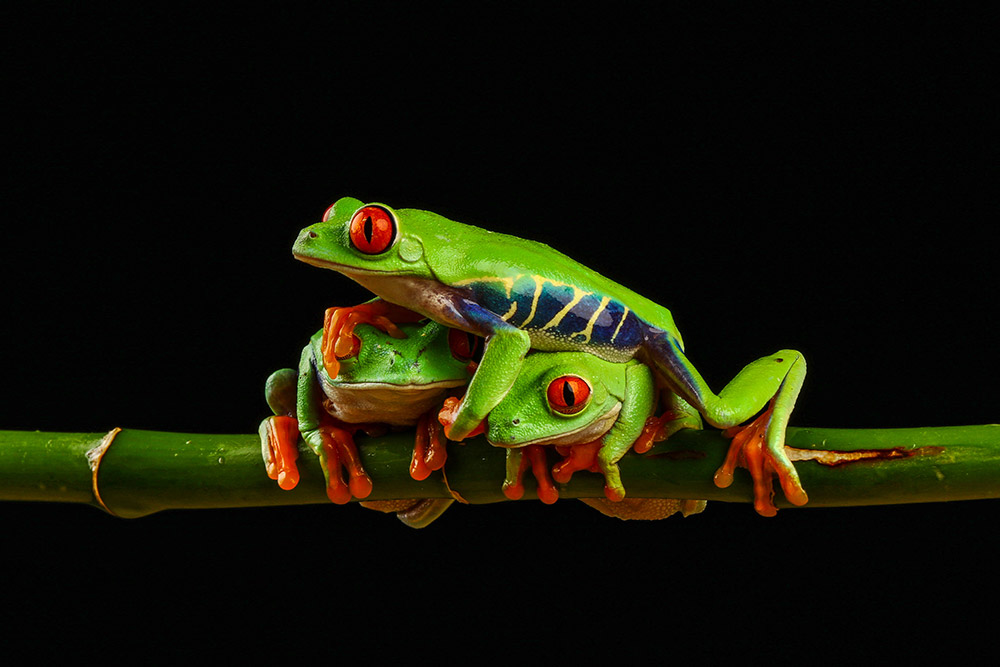 There’s something endlessly charming about these highly distinctive red-eyed tree frogs. Being so full of character, they make a great subject for photography. A lot of the time, we see images of them singly.

It’s much more difficult, therefore, to capture a group of them in a moment where each is playing a different role in the image but all three come together – but that’s what Edward has managed to do here. It’s almost impossible not to anthropomorphise what’s going on: the top frog clambering over its friends, as if to get a better view of something; the long-suffering one on the left, partially squished; and the one on the right wondering whether it’s next. Lovely work. 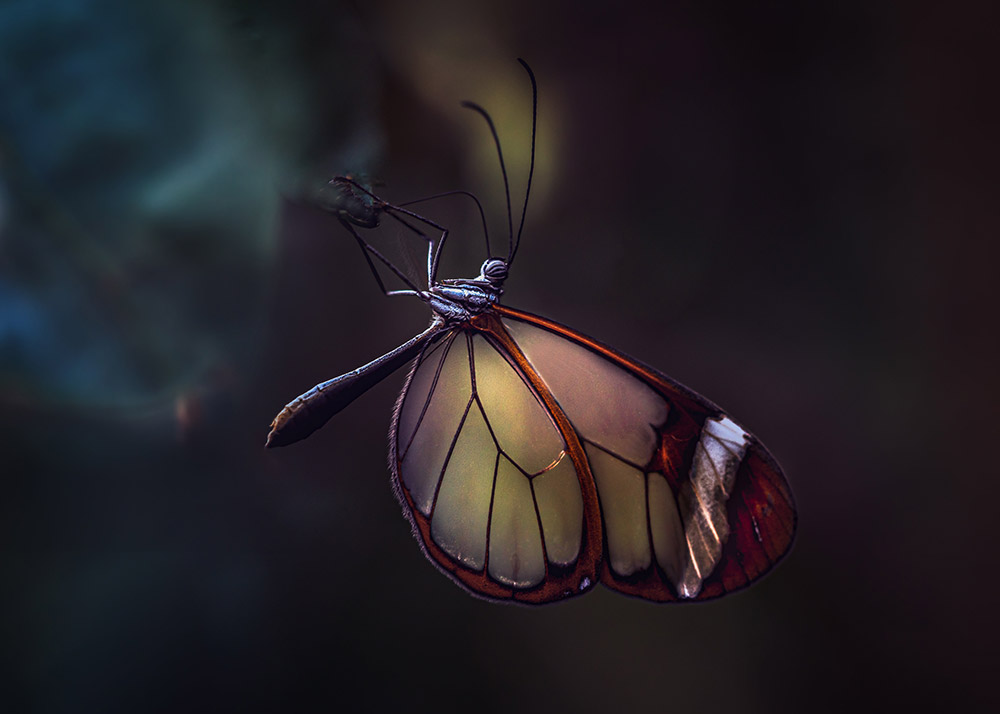 This butterfly is known as a glasswing, which is very appropriate, given that Julia has managed to make it appear almost like a piece of Tiffany glass. The extraordinary translucence of its wings, outlined in a deep amber colour, has been rendered beautifully, while the shallow depth of field makes the insect appear as if it is suspended in mid air – adding to the overall magical feel of the image. It really is like something out of a fairy tale or a children’s animation. A lovely study of an ethereally fascinating creature. 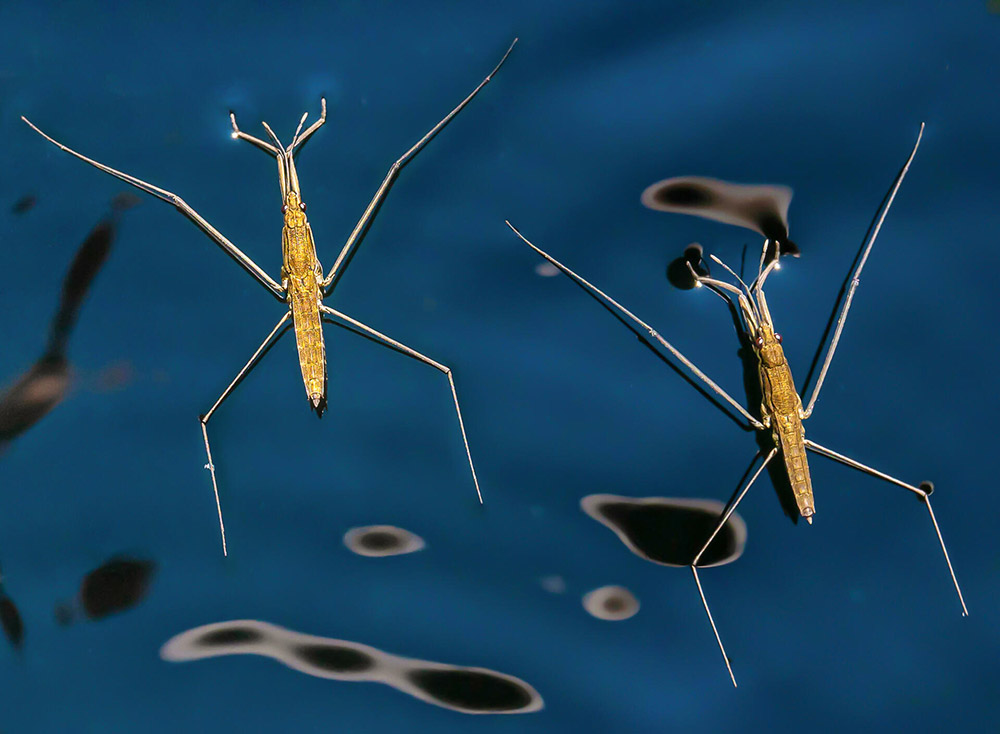 It’s easy to see why so many producers of science-fiction films use nature as the basis for their fantastical creatures. The pond skaters Ulrike has photographed here look as if they could easily double up as some form of transport through the galaxies.

Her capture allows the viewer to marvel at the insects’ ability to barely make a dent in the surface of the water they travel across so effectively. The black areas of reflection introduce an almost surreal element to the scene, and add depth to the inky-blue of the water. It’s an image that rewards the viewer, the more time that is spent with it. 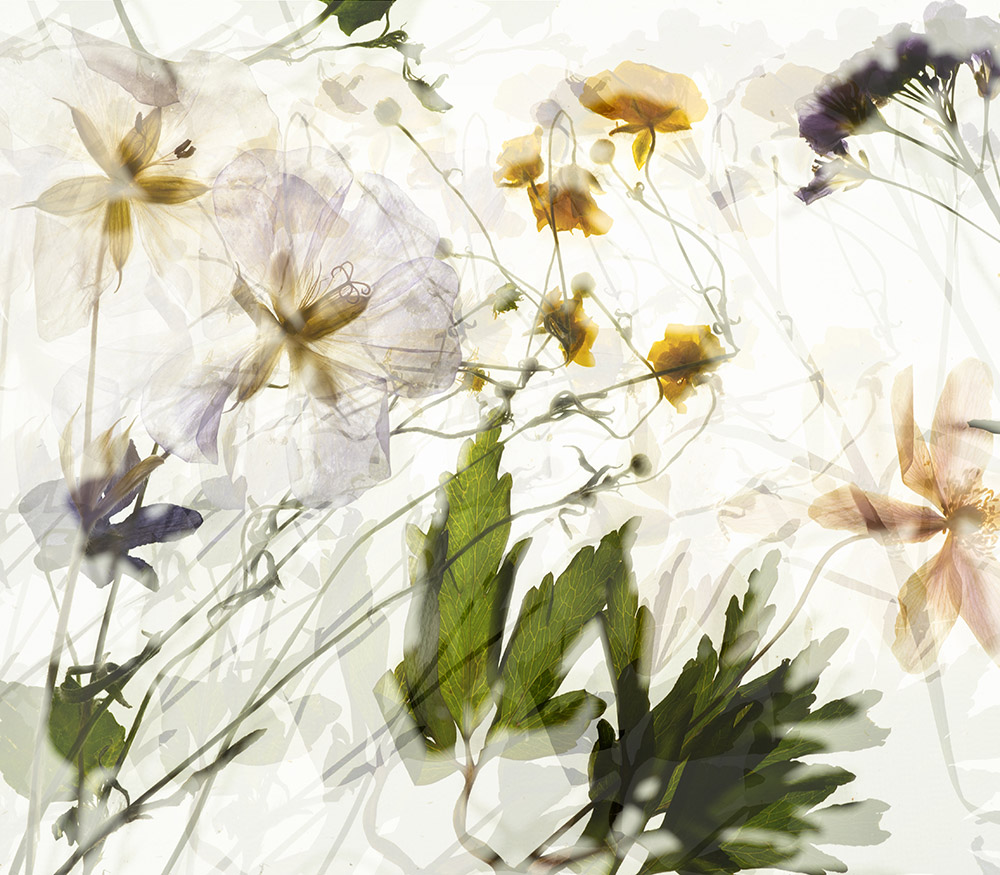 One of the enduring pleasures of photography is its capacity – in the right hands – to produce something that looks like anything but a photograph, and that’s what David has achieved here. His composition of pressed flowers, placed on a lightbox and photographed using a multiple-exposure technique, has created something more akin to a watercolour.

The multiple exposures mean the image has more depth than a conventional flatlay, and there is so much to pick out and study – it would be easy to spend several minutes with this image, then return later and see something different again. The purples, yellows and greens all complement each other beautifully, and there’s just enough negative space to ensure it isn’t too busy. 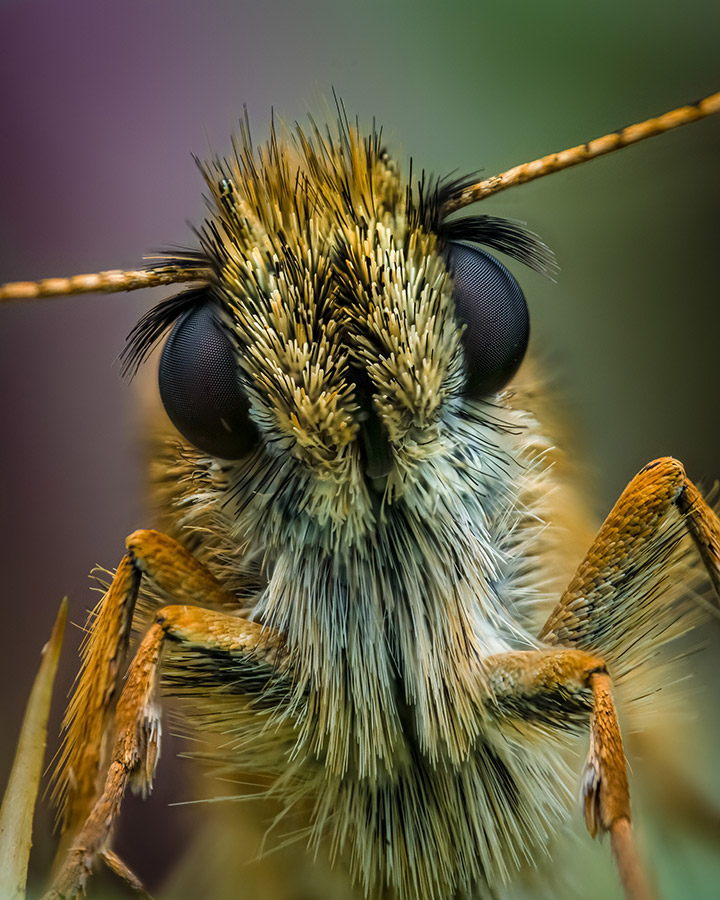 This shot is all about the extraordinary detail of the skipper. Who could look at this image and not marvel at the power of nature and evolution? Paul’s many early-morning outings paid off when he found this resting creature – it’s a respectful and sympathetic stacked shot. Well done. 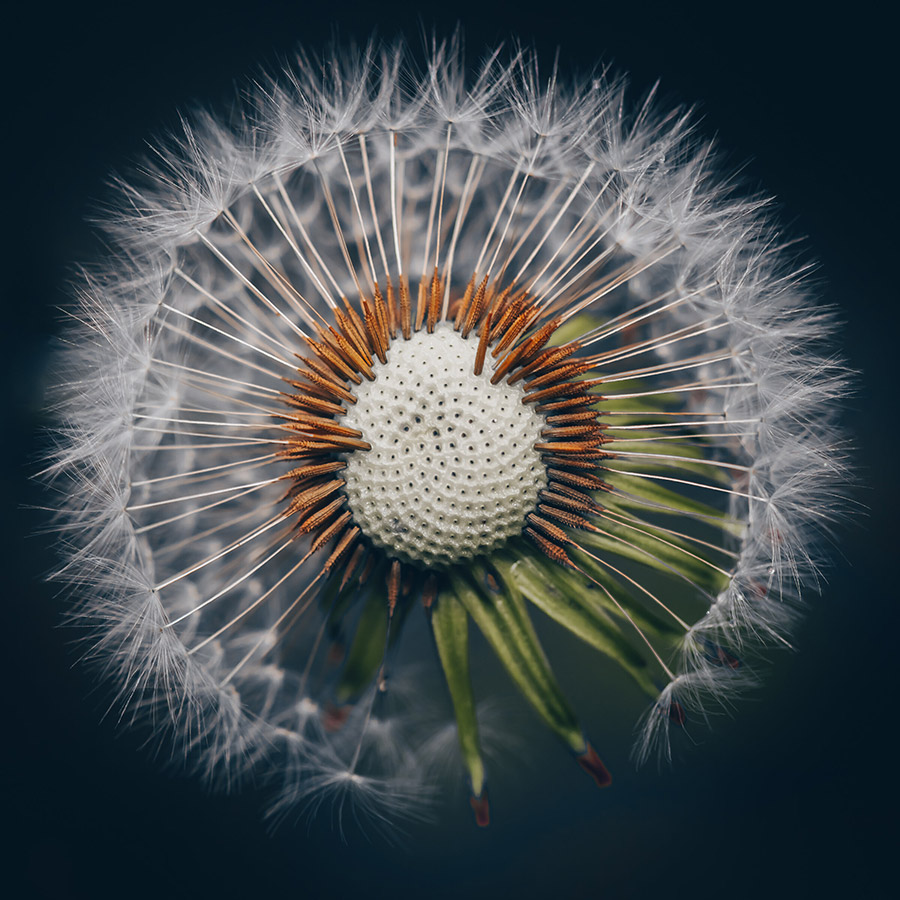 Nicky isn’t the first person to photograph a dandelion clock, and certainly won’t be the last, but the judges felt this one deserved recognition for its dream-like qualities. The sharpness of the centre, with the seeds falling away into softness, give the image that something extra. And the fact that the dandelion clock isn’t perfect is pleasing, too. The missing seeds at the bottom right of the head add an extra dimension and interest to the frame. An apparently simple shot, very well executed indeed. 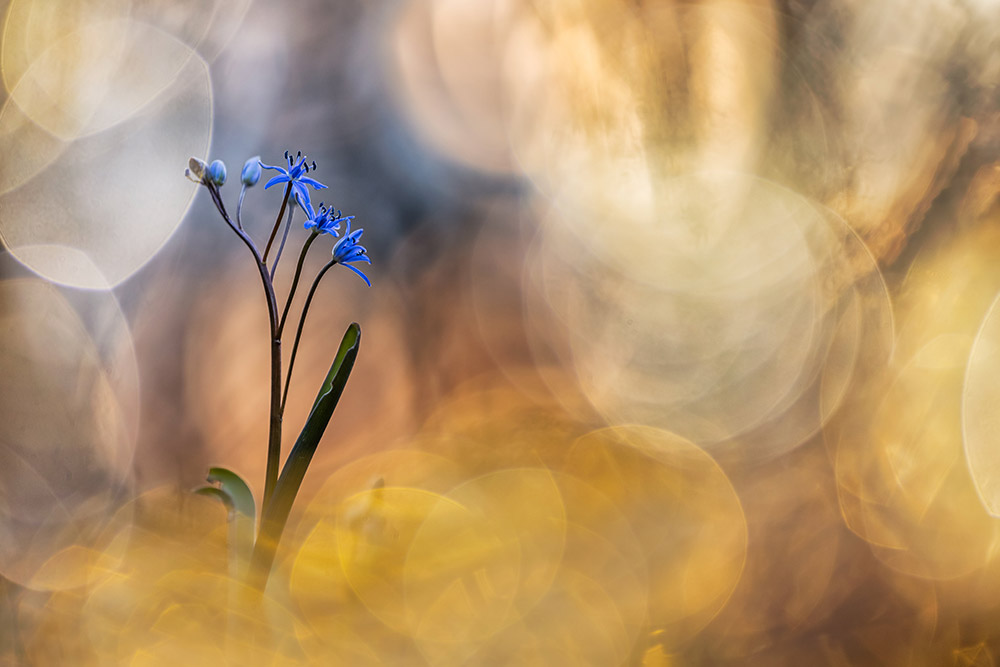 Macro photography is often about filling the frame with the subject, but for his stunning image, Henrik has chosen to step back and give the delicate Alpine squill space to breathe. The bokeh and swirls of light – a combination of natural and artificial sources – are simply gorgeous, without detracting from the charm of the flower, which remains the star of the show at all times.

See the winners and full shortlist for APOY 2022 round six, Close-ups here 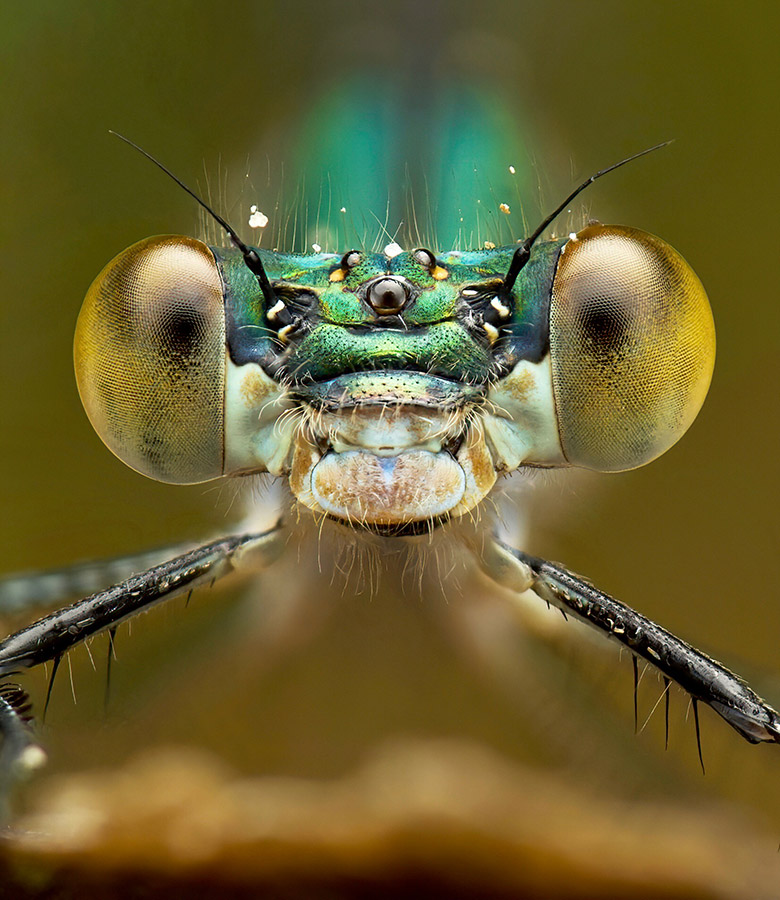 Here we have an absolutely superb focus-stacked image of an emerald damselfly that’s made up of 115 frames. Gustav’s excellent technique has revealed an almost microscopic insight into this extraordinary creature, forcing the viewer into stopping and appreciating the insect’s ‘structure’.

From the bulbous eyes to the barely visible hairs on its ‘chin’ and legs, it’s a privilege to be able to study the creature in such detail. Gustav’s effort, which involved being out at 4am to catch the damselfly while it was still resting, has paid off handsomely. 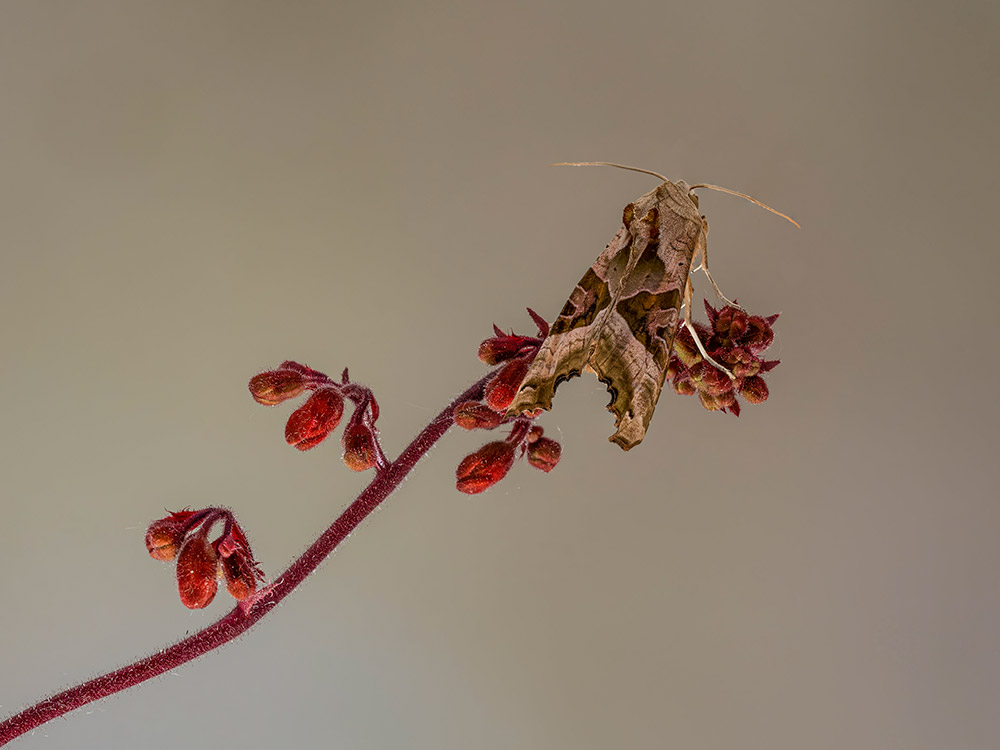 Steve made the most of his grandson’s school project to hatch an angle shades moth, and photograph it once it emerged from its chrysalis. He was able to use natural light and stack six shots to capture it at rest.

Steve is a member of Stafford Camera Club, and received ten points to add to the society’s tally when he entered the image into APOY. You can do the same when entering your images – simply choose your camera club from the drop-down menu when uploading your entries into the competition.

Things are continuing to be very tight across APOY’s top ten. Tommaso Carrara, who has taken top spot in two categories, is only 40 points ahead of second-placed Sabrina Garofoli. And with a mere 120 points separating him from the equal-ninth-placed photographers, a couple of wins and high placings could see all that change.

The photographers in Young APOY are following suit and making sure things stay as exciting as possible as we enter the last few rounds of this year’s competition. As far as camera clubs go, Kempsey Camera Club is creeping up on Launceston. Could they end up being the dark horse in the race? Watch this space over the coming months.

For her delicate winning image, Molly Hollman used a Sigma 105mm F2.8 DG DN MACRO | Art. Constructed with 17 elements in 12 groups, including one special low-dispersion element to minimise chromatic aberrations, the lens is dust and moisture sealed, and has a closest focusing distance of 29.5cm.

When reviewed in AP, it was described as ‘capable of delivering superb results’, and given five stars. It is available in L and Sony E mounts, and can be found at MPB starting from £614 for one in excellent condition. 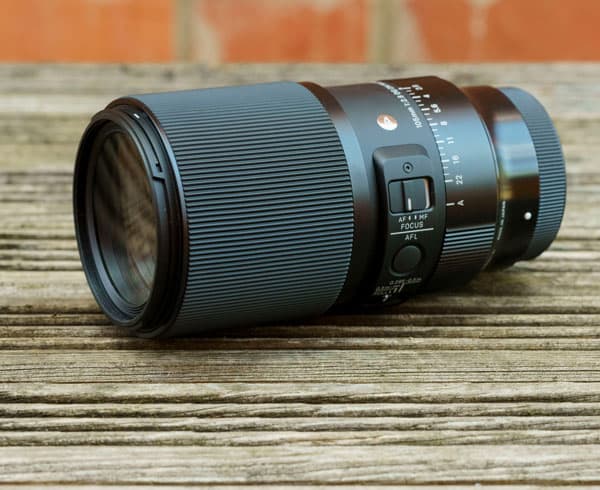 In fourth place, Edward Payne used a Canon EOS 7D Mark II to shoot his study of tree frogs. Launched in 2014, this 20.2MP crop-sensor DSLR features weather-sealing, 10fps continuous shooting and a fast autofocusing system. It has an ISO range of ISO 100-51,200 (extended). Its features are tailored to sports and wildlife photographers, and when reviewed in AP it was said to ‘excel in its build, handling and autofocusing system’. This excellent camera can be found at MPB for between £344 and £574, depending on condition. 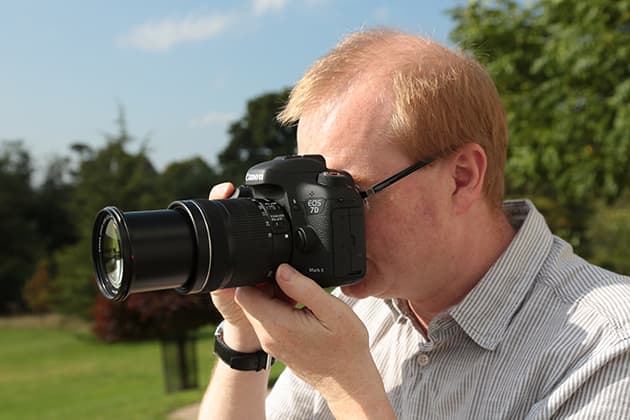 Taking fifth place, Julia Martin shot with a Sony FE 90mm F2.8 Macro G OSS. The first dedicated macro lens designed for Sony’s full-frame E-mount cameras, its two standout highlights are the optical Image Stabilization and the focus lock button on the side of the lens. You can pick up this lens at MPB for £679 in like-new condition. 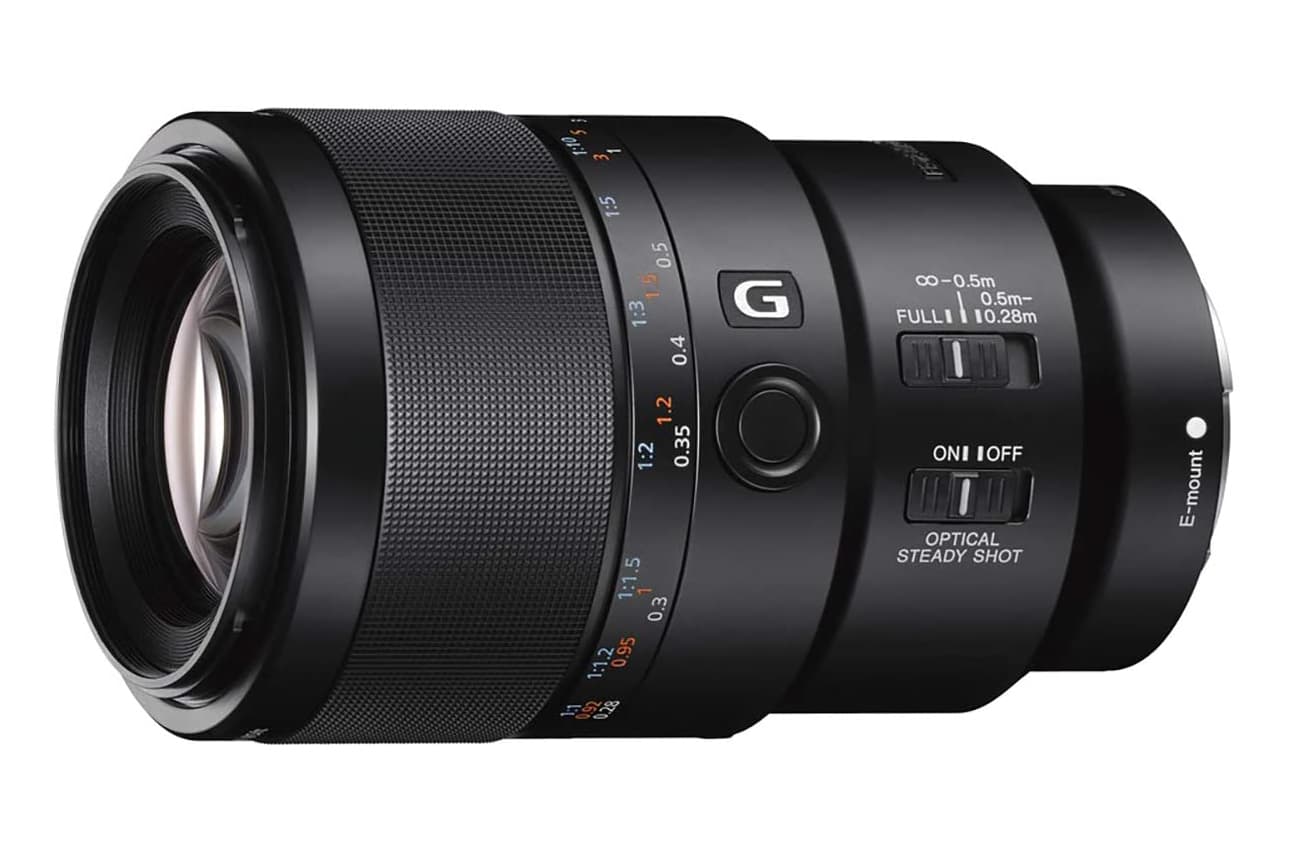