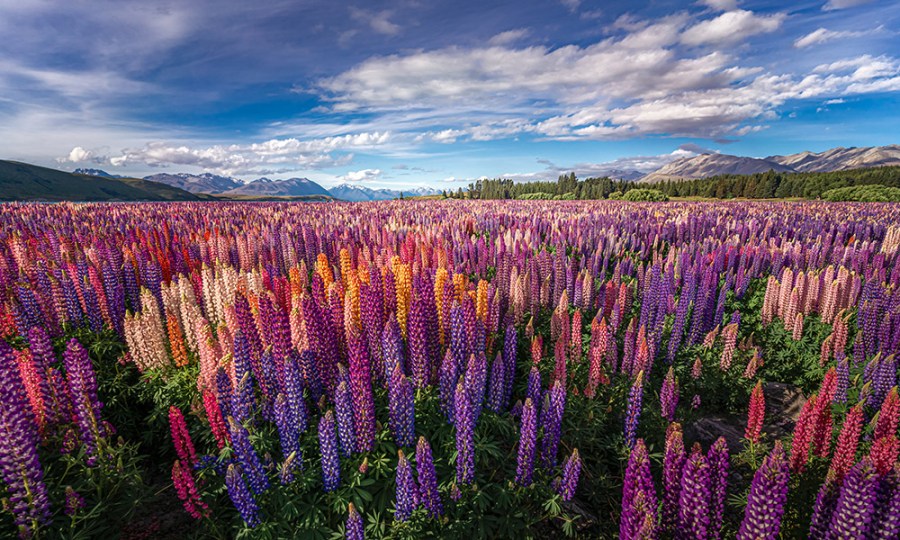 Here are the top 10 images uploaded to Photocrowd from Round Three, Travel, with comments by the AP team and our guest judge, Philip Lee Harvey

The aim of nearly all photography is to give a sense of place. Even if the viewer has never been to the location depicted, they should be left feeling as if they have stepped into the scene, and have an idea of its atmosphere, light, sounds, temperature, even smell. This is particularly true of the travel genre, where the whole point of the image is to transport the person looking at it. At the same time, the image has to be elevated beyond the picture postcard. It has to tell a story and take the viewer beneath the superficial. It’s an art, and a surprisingly tricky genre to master. Happily, all the images in our top ten fulfil this brief in imaginative and creative ways. 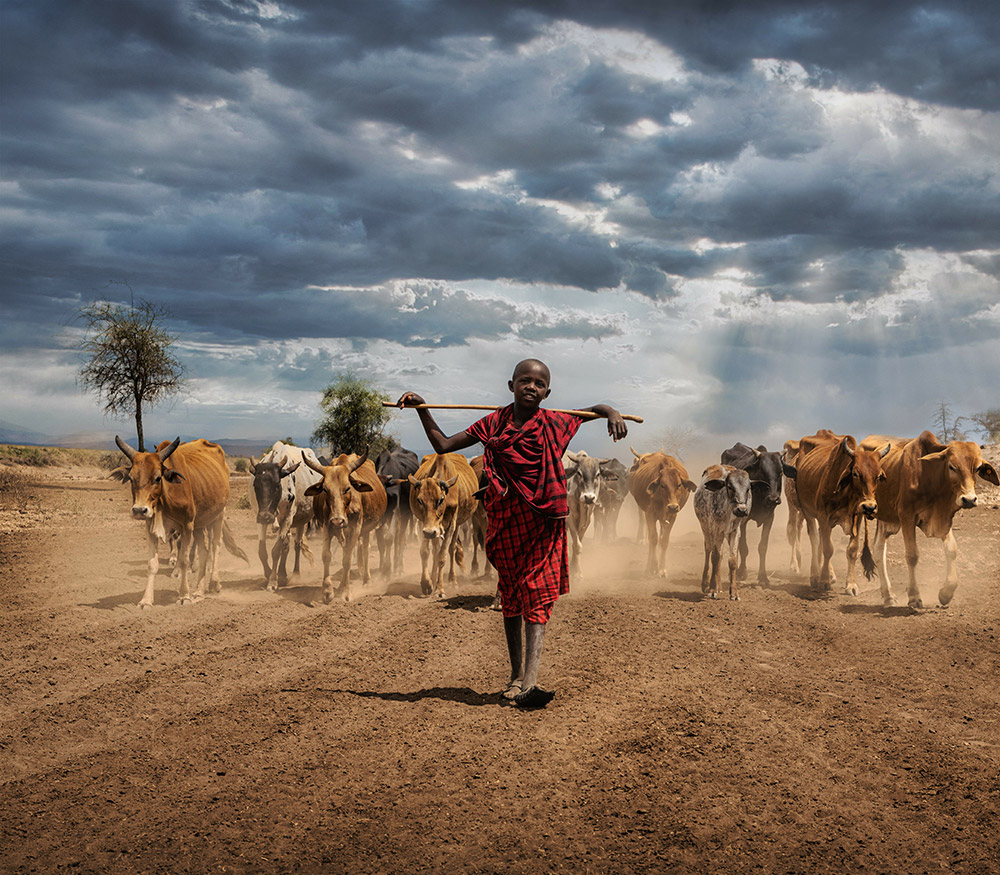 As we said in the introduction, a good travel photograph should give a sense of place, and this image by Osama simply sings with atmosphere and connection. The boy’s pose, as he walks towards the camera, is relaxed and natural, as the cattle plod behind him. We can almost choke on the relentless heat, thanks to the dust being kicked up and the hard contrasts in the sky. Placing the boy centre frame is bold and clever, and completes a cracking shot. 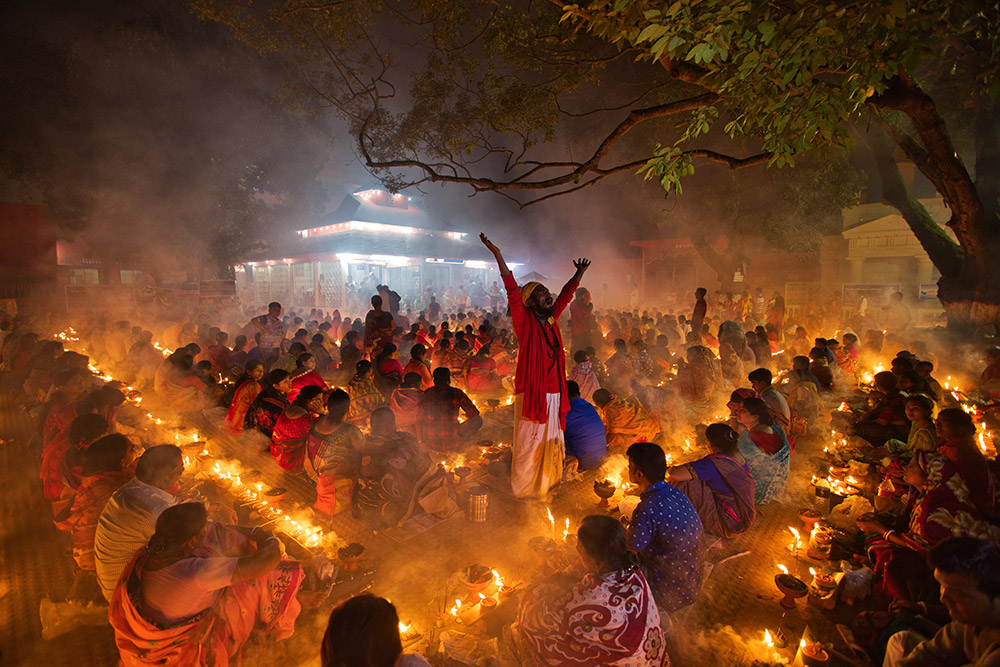 In this image by Azim, the viewer is sucked straight into the scene, with the eye going immediately to the figure in the middle, his raised arms contrasting dramatically with the quiet attention of those on the ground. The light and smoke given off by the hundreds of candles imbues the image with atmosphere, and the composition, with the candles forming a ‘V’ shape introduces dynamism but also control to what might otherwise have been a rather confused scene. Outstanding work. 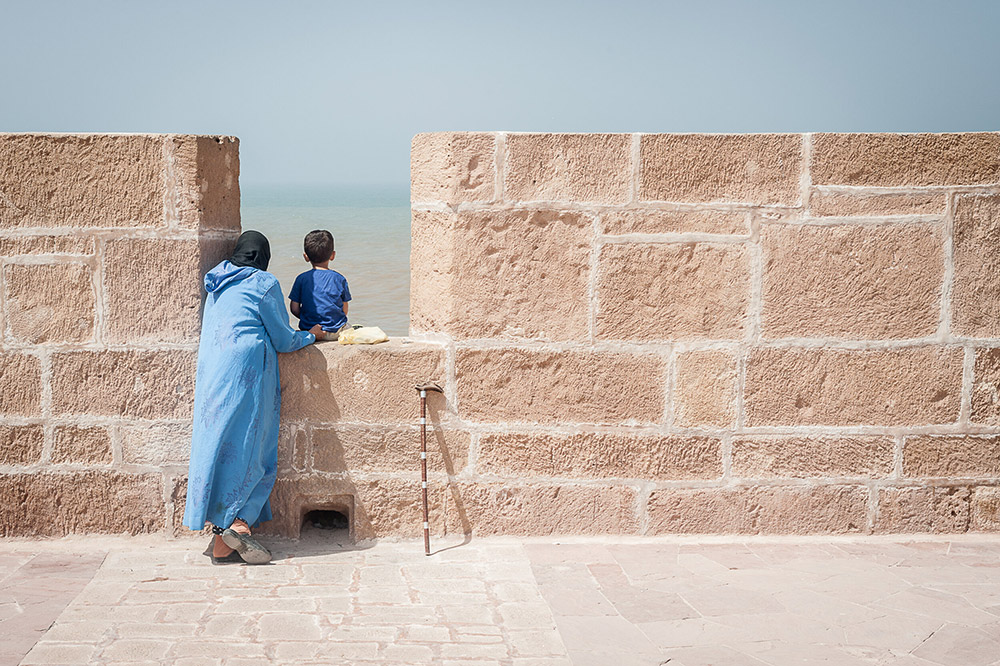 Here we have a quiet, contemplative moment that Peter has done well to observe, where the connection between child and adult is subtle and touching. We can relate to the universal pleasure of sharing a view of the sea – but we can also appreciate the protectiveness of the woman gripping the boy’s clothing. The blue and beige colour palette keeps things simple and effective – and the placement of the walking stick and its shadow ties everything together beautifully. 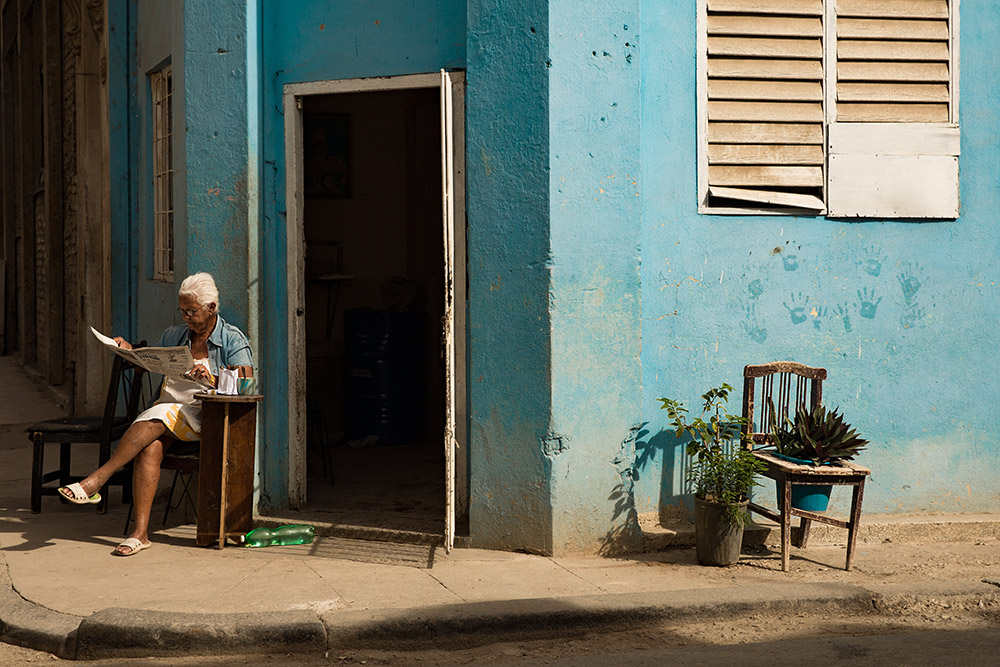 Guest judge Philip Lee Harvey says: ‘The best images often have a surreal edge. Not all information is given to the viewer – in fact, it is their imagination that adds the last ingredients to the story. There is a lot going on in this wonderful image. A beautifully observed street scene, excellent composition and a great use of a minimal colour palette. But, look again and you will see much more.

The chair on the right perfectly mirrors the woman’s position, although it’s been a long time since it was used in the conventional sense. Even the plastic bottle fits the into the restricted colour palette and those handprints on the wall tell of another story, not seen. There is a painterly feel to the lighting, which contrasts light against dark, making it almost 3D. And although I am aware that an image can be broken down into elements not always noticed at the time, many may have passed this scene by.’ 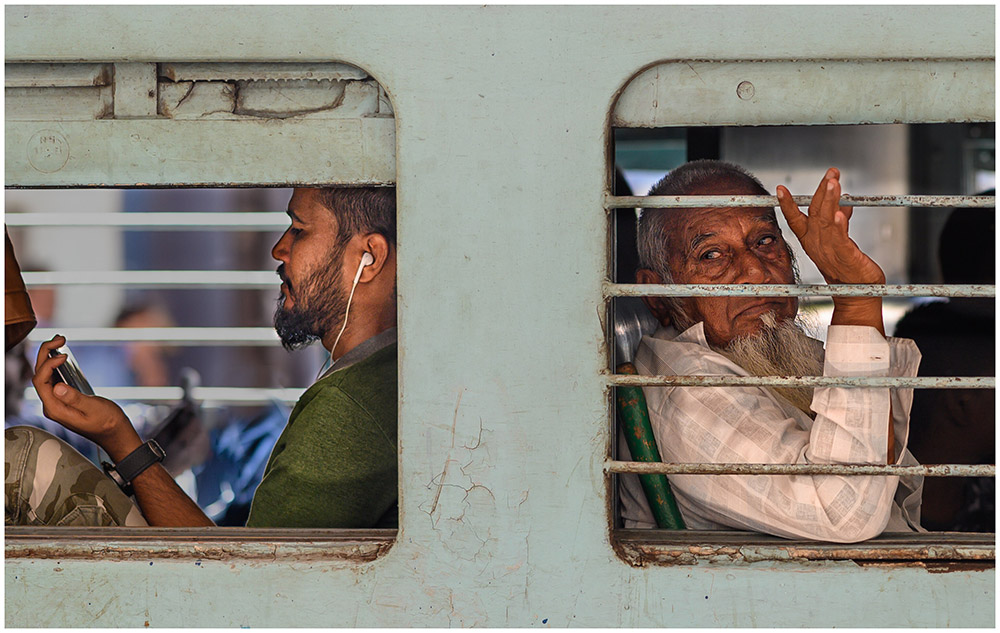 Photographing through a train window is a tried-and-tested symbol of travel – both in the literal sense of the genre, and also as a representation of movement from one place to another. What lifts Charles’s shot out of the ordinary is the contrast between youth and age. On the left we have a younger man in modern clothing, absorbed, in all likelihood, in a film, TikTok or YouTube clip on his phone. On the right is an older man in what appears to be more traditional clothing, lost in thought as he gazes out of the window. Had he been looking ahead, hands on his lap, the picture would have lost all impact, so Charles did well to capture a moment that encapsulates two separate worlds existing just inches from each other. 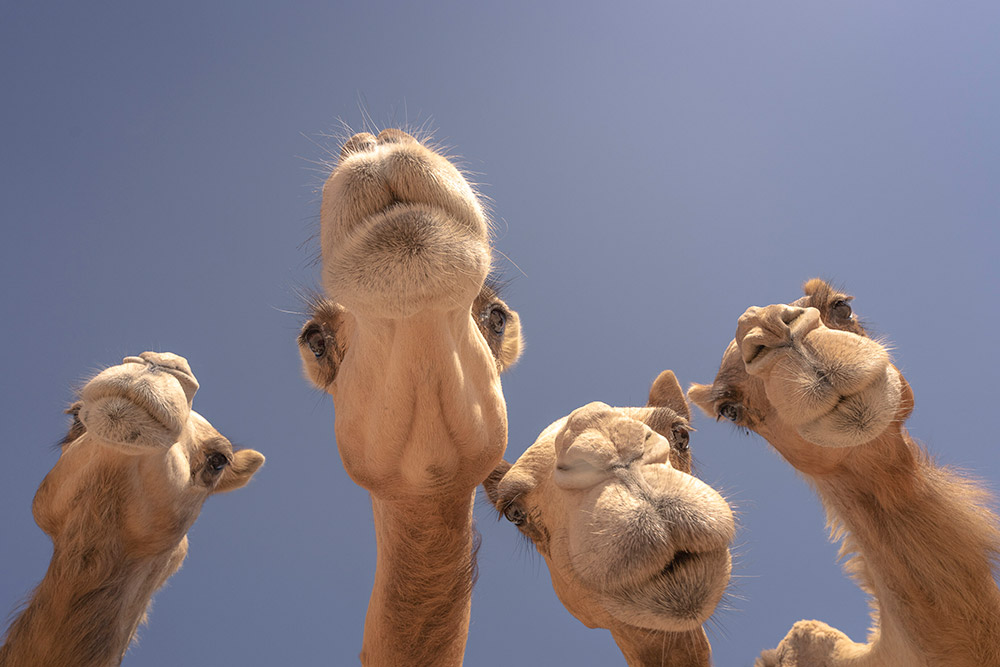 Ask someone to imagine a typical travel shot, and they’d almost certainly picture something that included people in it, but this entertaining capture by Daniel demonstrates that animals can transport us to a place just as effectively as any human being. We don’t need any more context to know that we are in the Middle East. Achieving a coherent composition would have been no mean feat here, and the fact that the camel second from right is looking down into the frame is what pulls it all together. 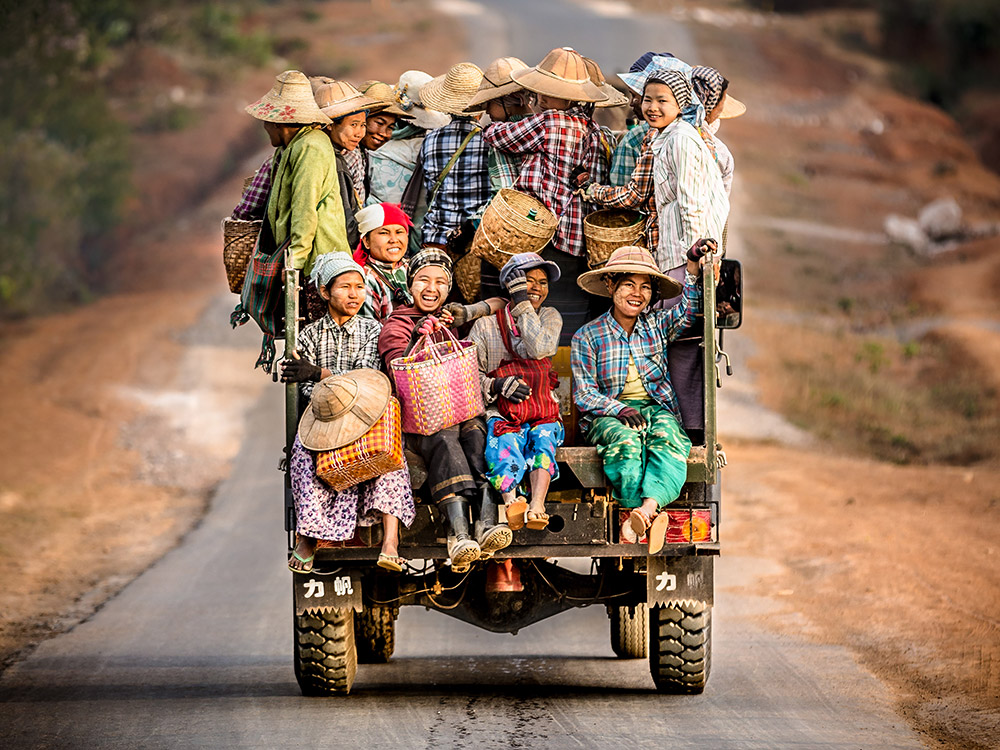 What’s the point of travelling if not to have fun? And that’s what this image exudes. There’s a fine line to tread between reflecting reality and ‘othering’ those you photograph, but this falls on the right side, the judges felt. While there’s no doubting the intensely hard slog of working in the rice fields, as these women had been, to suggest they can’t also enjoy the spectacle of a photographer taking their picture would be patronising. The closer you look at this image, the more you appreciate the individuals who make up the whole. As with all good pictures, it’s worth spending some time with. 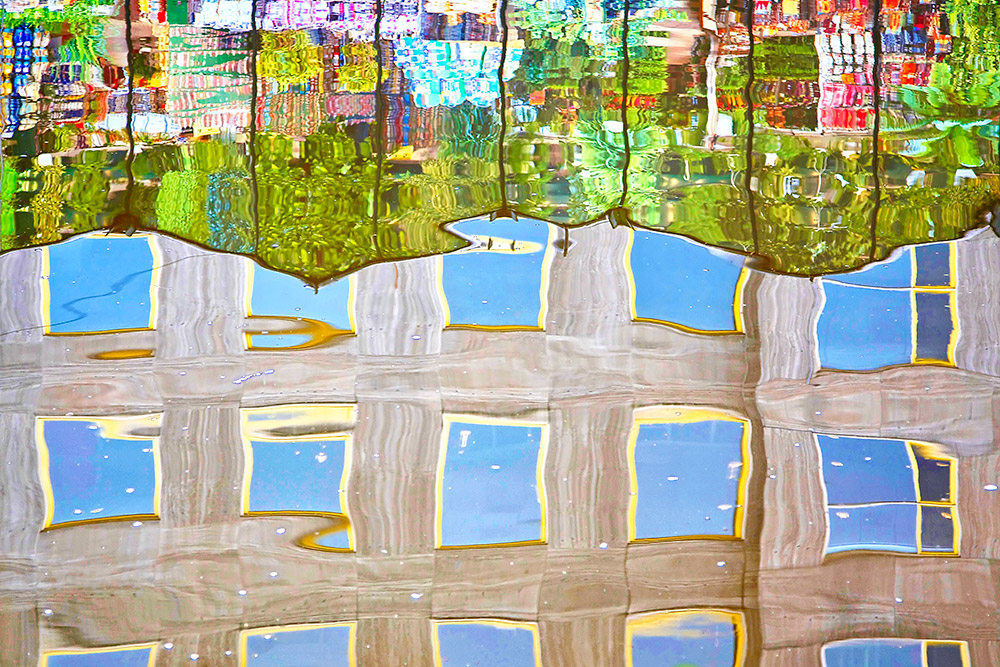 Abstract pictures are something of a rarity in the travel genre – perhaps because photographers assume they need to reflect the reality of where in the world they are. However, this eye-catching abstract by Bogdan turns that assumption on its head. The judges were fairly certain it was taken in Amsterdam, and they were right, so it demonstrates that even unusual images can say something about the place in which they were shot. There’s something of a Monet painting about the composition and tones, particularly those in the top third of the frame. The complexity of the top area could have tipped over into confusing if it hadn’t been for the relative simplicity of the sinuous windows in the lower part. A clever shot, well seen. 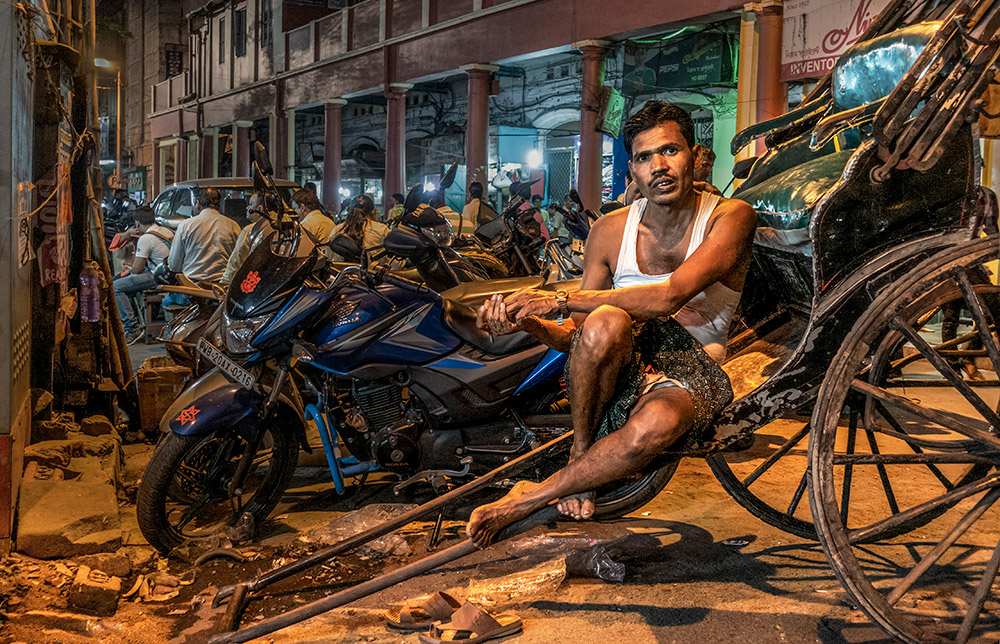 An environmental portrait such as this one is an essential part of any photographer’s travel portfolio. The composition is spot on, with the rickshaw driver placed towards the right of the frame, and just the right amount of the rickshaw wheel and seat included in the frame for us to know instantly what he does for a living. The diagonal line of the arms descending from right to left creates a strong triangle, emphasised further by the angle of the man’s leg. The contrast between the rickshaw and the motorbike alongside it is a strong one, and the pillars heading out of frame to the left help to anchor everything. Finally, the muted tones keep everything contained, and the man’s pensive expression seals the deal. A great shot, which Bruce should be extremely pleased with. 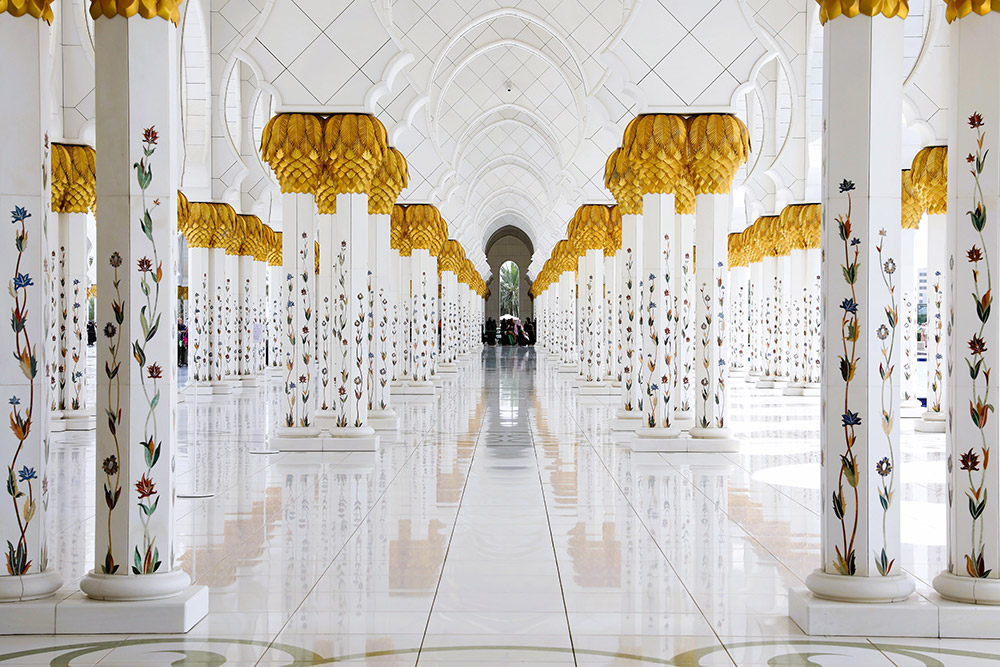 Who doesn’t love a pleasingly symmetrical architectural image, particularly one as pristine as this? Venkatesh has photographed the Sheikh Zayed Grand Mosque in Abu Dhabi in a way that draws the viewer straight down the centre of the frame, taking in the floral painting and gilded details on the way. This is no snapshot – it would have taken time and observation to ensure everything remained completely balanced and cropped in exactly the right way. Even the smallest step to the left or right would have thrown it off kilter. His patience and precision has paid off. 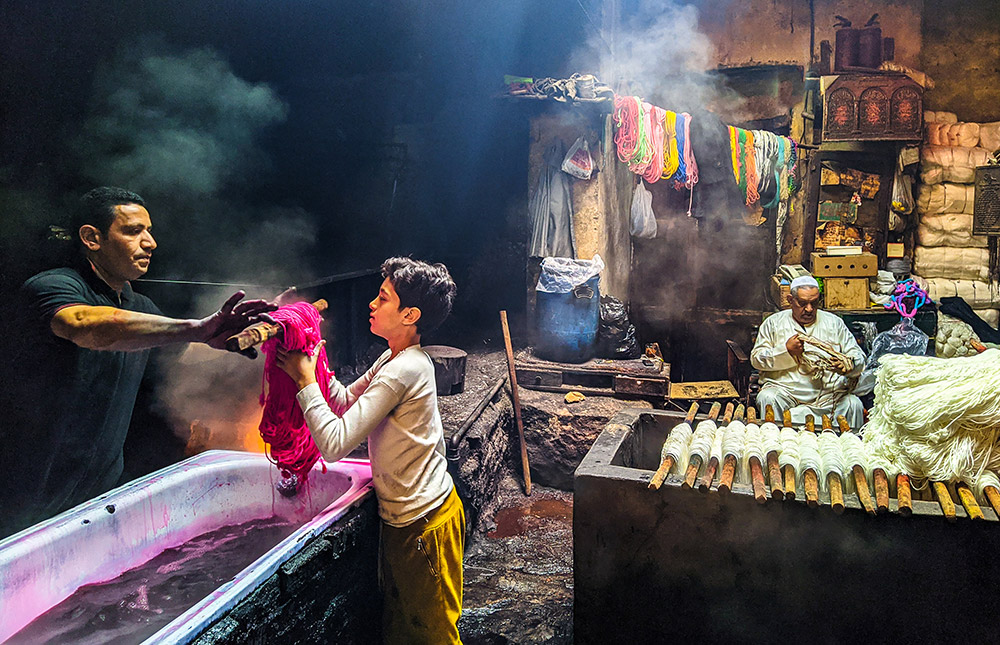 It takes an extremely good and talented eye to stand in front of a busy, complex scene such as this and take a picture that makes visual sense, but Kareem has managed this expertly. Our eye immediately goes where it’s supposed to – to the man and boy on the left, working together with the dripping, fuchsia-pink wool. From here, we move across to the man on the right, absorbed in his task, his clothing merging with the undyed wool in front of him. The steam and detail of the dirty floor and walls takes away any sense of romanticism that we may have been inadvertently drawn into. This is hard work, pure and simple, and very well captured indeed. 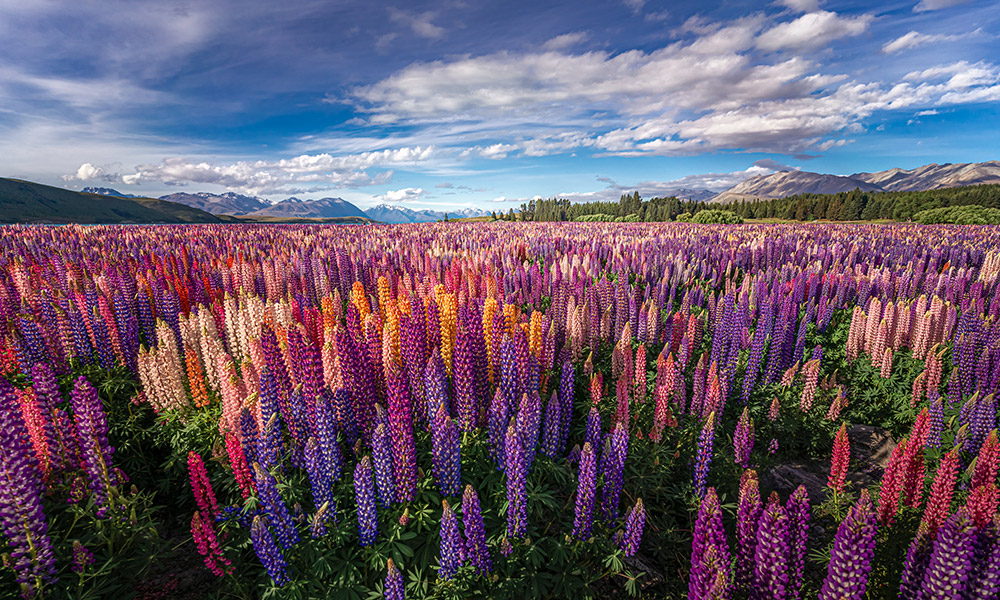 As with last year’s Amateur Photographer of the Year competition, this year, entrants can pick their club from the dropdown menu when uploading their images. Any points they are awarded will be added to their camera club’s total, with the winning club being awarded £500 of MPB vouchers. That’s what Tim Burgess did, and his stunning shot of lupins at Lake Tekapo in New Zealand was awarded ten points for Plymouth Camera Club, which currently sits in third place. He’s made great use of the wide end of his 17-28mm zoom, with the distortion at the edges making the multicoloured blooms appear to explode out of the frame. He’s included just enough detail of the mountains beyond to give context to the scene. Definitely one to print, frame and hang on his wall.

The 2022 leaderboards following results of Round Three, Travel

Things are always tight at this early stage of the competition, and with only 60 points separating first and joint-seventh places in the main competition, there is still a long way to go. As the rounds continue, we are likely to see new names appearing in the leaderboard. Things are equally competitive in Young APOY, with several entrants on the same points as each other. It all goes to demonstrate the value of entering as many rounds as possible. In the camera clubs leaderboard, Launceston are still in the lead, but Kempsey are slowly but surely creeping up on them.

Inge Schuster in 4th place and Bogdan Zarkowski in 8th place both shot their images using a Canon EOS 5D Mark III. Launched in 2012, this full-frame DSLR workhorse features a 22.3MP CMOS sensor and DIGIC 5+ image processor, with 61-point autofocus, 63-zone metering system and 6fps continuous shooting. When reviewed in AP, it was described as ‘extremely fast and responsive’, and ‘difficult to fault’. This camera can be found at MPB from £369 for a heavily used model to £739 for one in excellent condition. 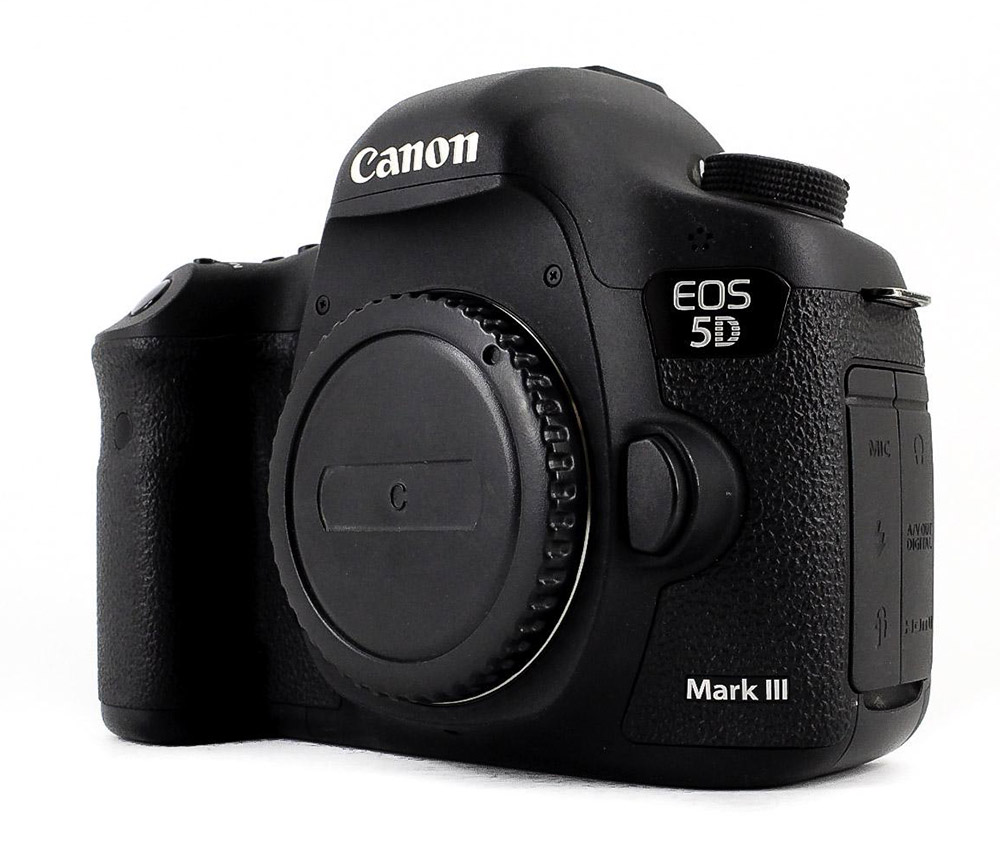 In third place, Peter Murrell chose to shoot with a Nikon AF-S 50mm f/1.8G lens. This focal length is ideal for the travel images, and this particular lens is lightweight and compact. The maximum aperture of f/1.8 makes it great for low-light photography, while Nikon’s Silent Wave Motor means it’s quiet in use. It received five stars when reviewed in AP, and can be found at MPB for £99 to £149. 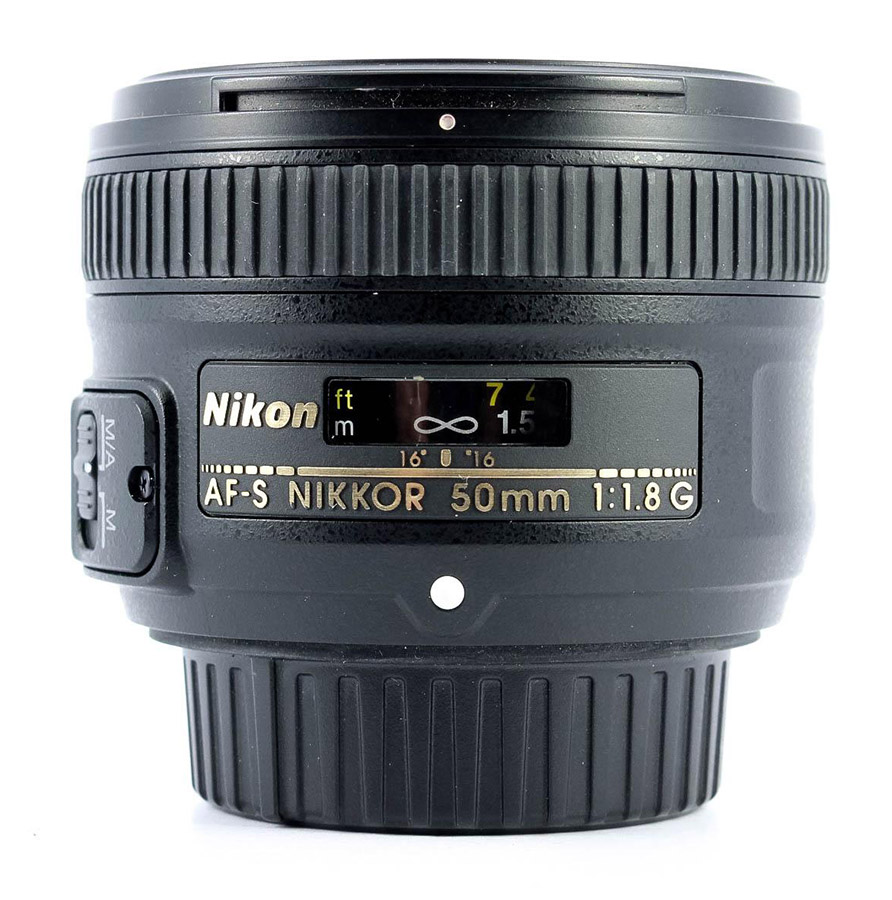 Taking 9th place, Bruce Harley took his excellent environmental portrait using the Sony RX100 III. This camera is great for travelling, and features a 20.1-million-pixel, 1in sensor, 24-70mm f/1.8-2.8 zoom lens and pop-up EVF. When reviewed in AP, it was described as ‘a companion compact camera to take with you everywhere’. You can pick one up at MPB for £299. 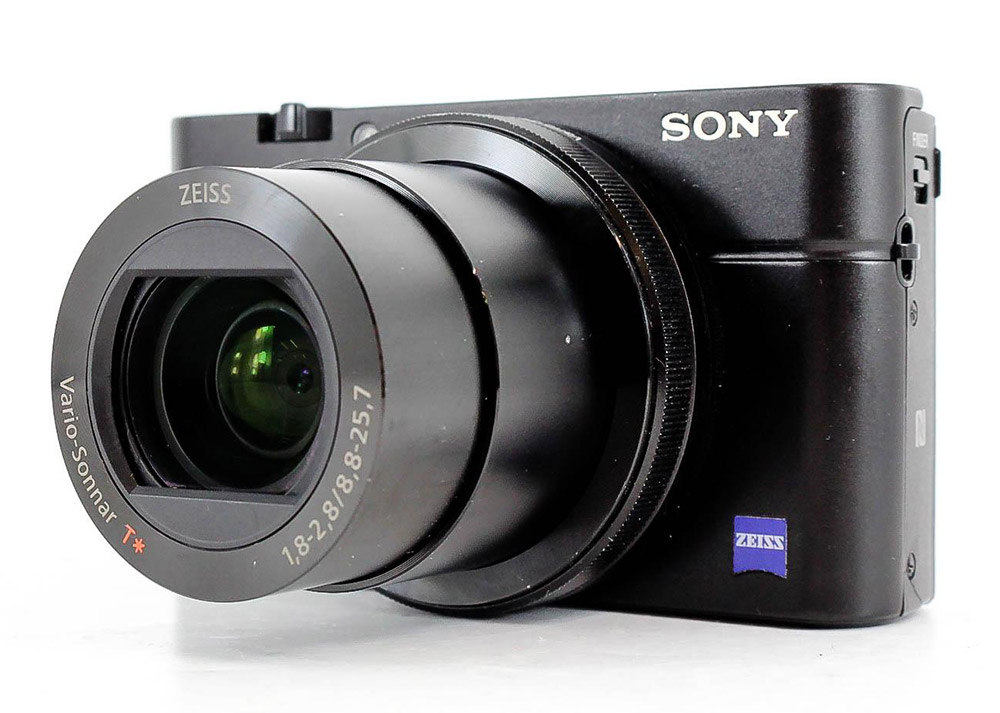