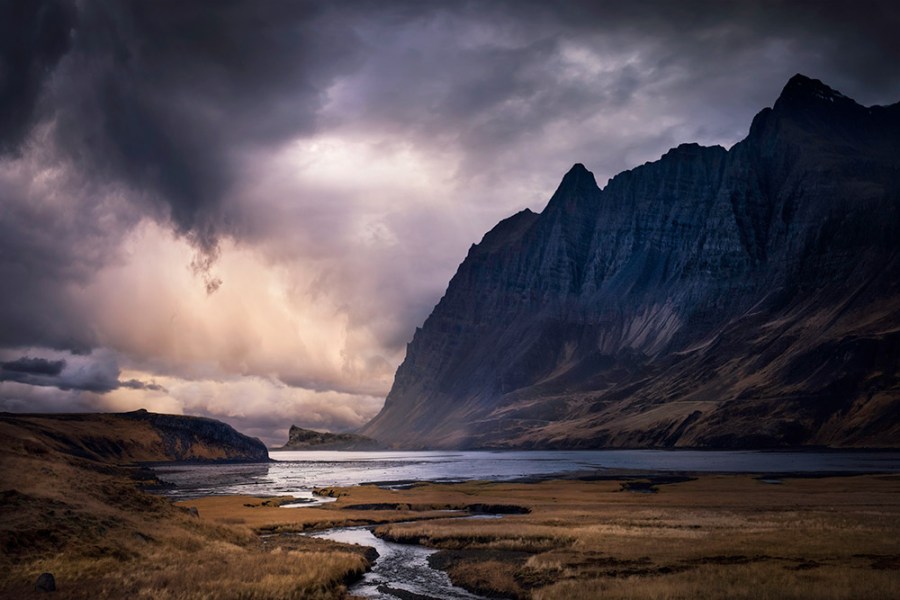 Here are the top ten images uploaded to Photocrowd from Round Four, Landscapes, with comments by the AP team and our guest judge

Traditionally, landscapes are the most popular genre among amateur photographers, and it’s easy to understand why. It’s a great excuse for getting out to the mountains, moors, forests and coast, and, when things come together, the pleasure of witnessing a few moments of stunning light – usually at the beginning or end of the day – can’t be beaten. In many ways, the photography is an adjunct to the overall experience!

The ‘classic’ landscape photograph – shot with a wideangle lens, and with a distinct foreground, mid and background – is still the tried-and-tested approach to the subject, and with good reason. But increasingly we are seeing different perspectives, be that shooting in flatter light, at the long end of a telephoto zoom, or in less ‘honeypot’ locations. All approaches are valid, and all made an appearance in this year’s landscapes round. We hope you enjoy the images as much as we enjoyed judging them. 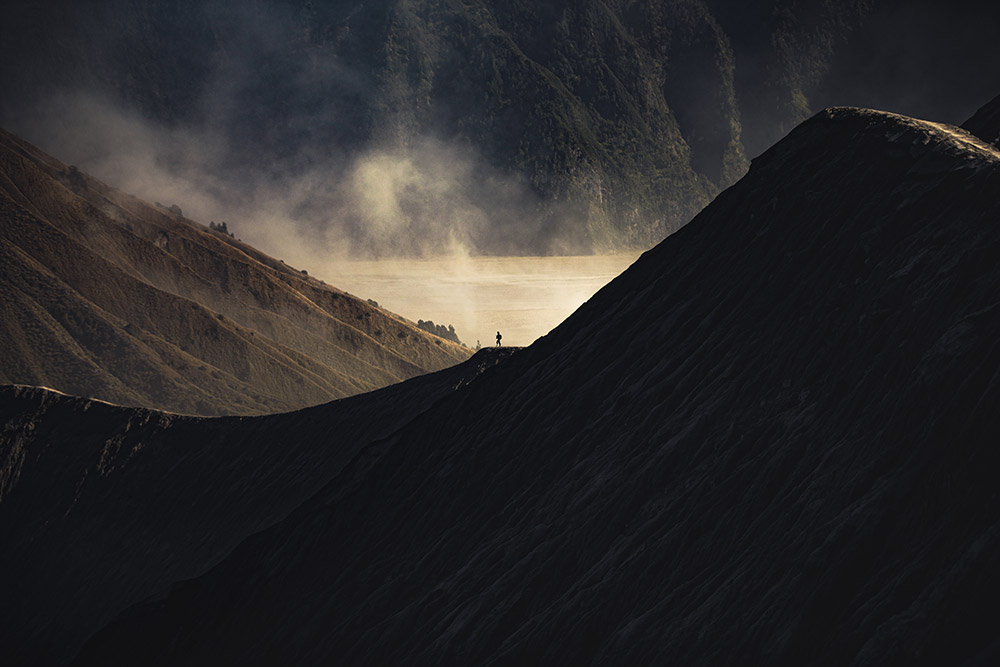 Guest judge Verity Milligan says: ‘Some images are all about atmosphere, and this is a great example. Landscape photography is about illustrating an emotion, and forging a connection between the photographer, the subject matter and the viewer. To achieve this, I like to think there is a trifecta of conditions, composition and content which pulls together to create something captivating.

This image does this well, using the atmospheric conditions manifesting towards the back of the composition to create a silhouette of the foreground. The line of the sloping ridge descends, leading the eye into the heart of the image, where a figure is standing taking it all in. This provides a much-needed sense of scale and demonstrates how awe-inspiring the setting really is. The low-key editing enhances the rising mist and the figure, making a compelling landscape photograph. Congratulations.’ 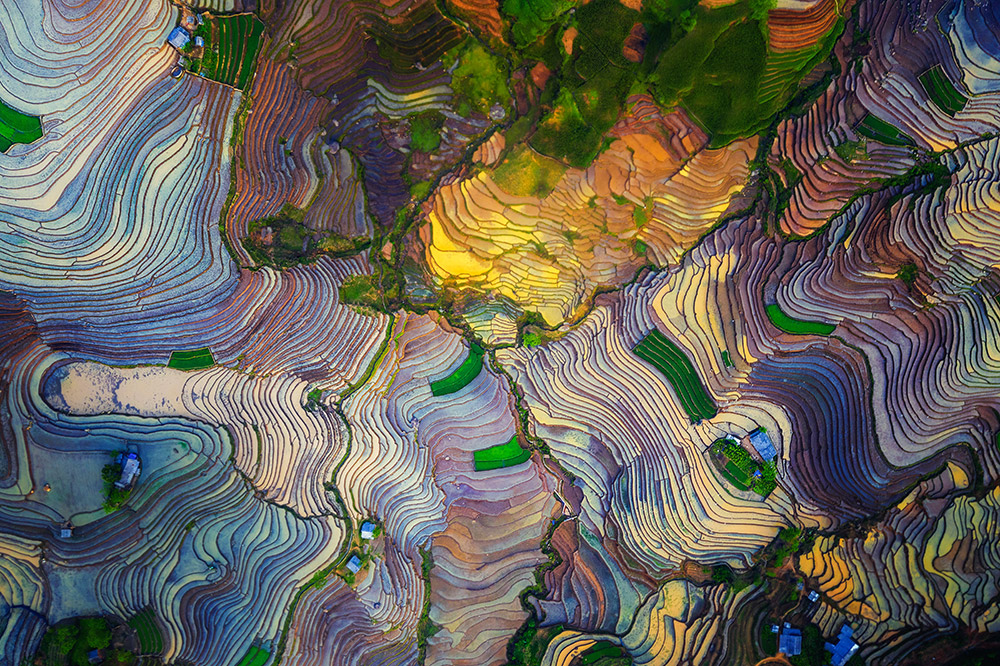 At first glance, this image appears to be a close-up of a piece of quartz or something similar, but look more closely and you will see tiny buildings dotted through the curves and sinews of the landscape of Lao Cai, which lies on Vietnam’s border with China. It’s an image that pulls the viewer in, and has a gorgeous depth that can sometimes be lacking in drone images. Picking out the subtle differences between the jewel-like colours is an enjoyable pastime in itself, and the whole image hangs together beautifully. 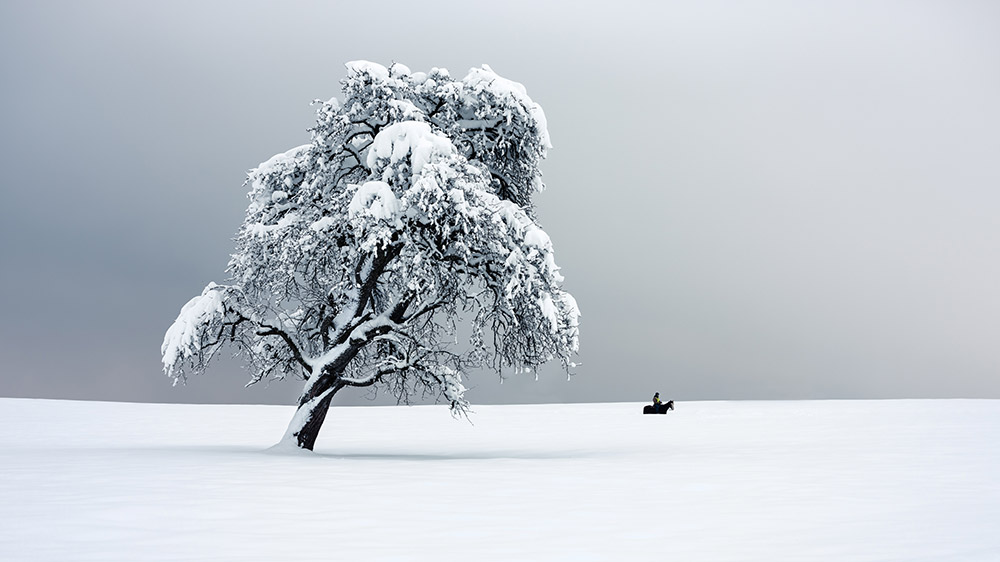 Glen calls this image ‘Quietude’, which is an excellent title for such a subtle yet compelling shot. It’s easy to imagine the silence created by the dampening effect of the snow, and the near-blankness of the grey sky sets off the snow-laden tree beautifully. The shadow cast by the tree gives just enough definition to the blanket of white beneath it, while the placement of the horse rider creates balance and a sense of scale. 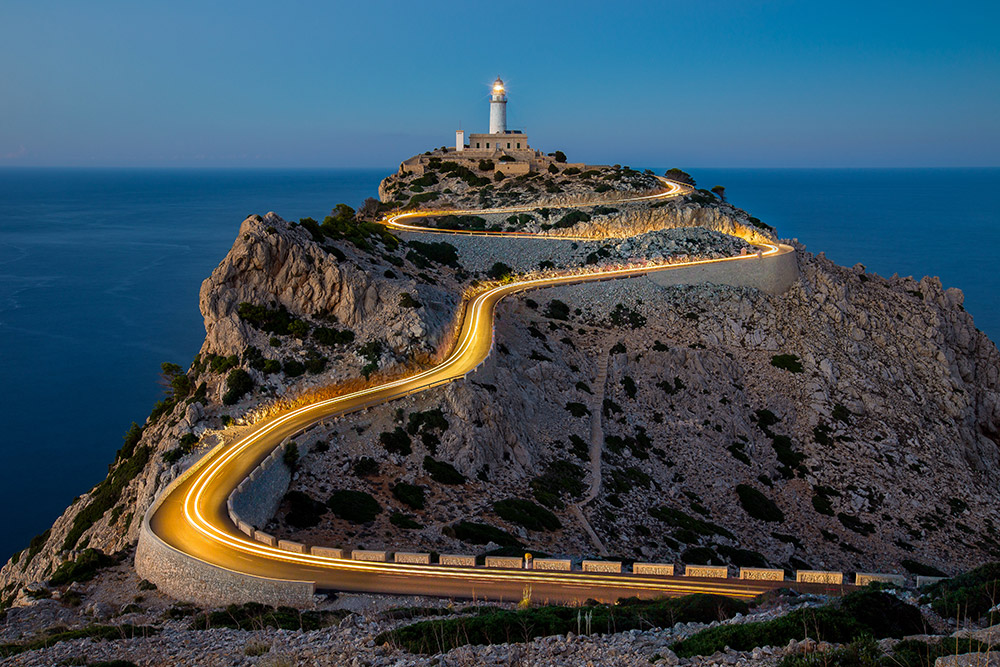 Using a winding road as a compositional device is nothing new, but Kevin made the most of it by waiting until dusk to take his excellent photograph at Cap De Formentor – the northernmost tip of Mallorca. The gold of the sinuous traffic trail complements the blue of the sea and the darkening sky perfectly, and the viewer’s eye is led up through the frame to the lighthouse at the top. Waiting until the light appeared in its window is a crucial finishing touch, and the image would have been far less successful without it. 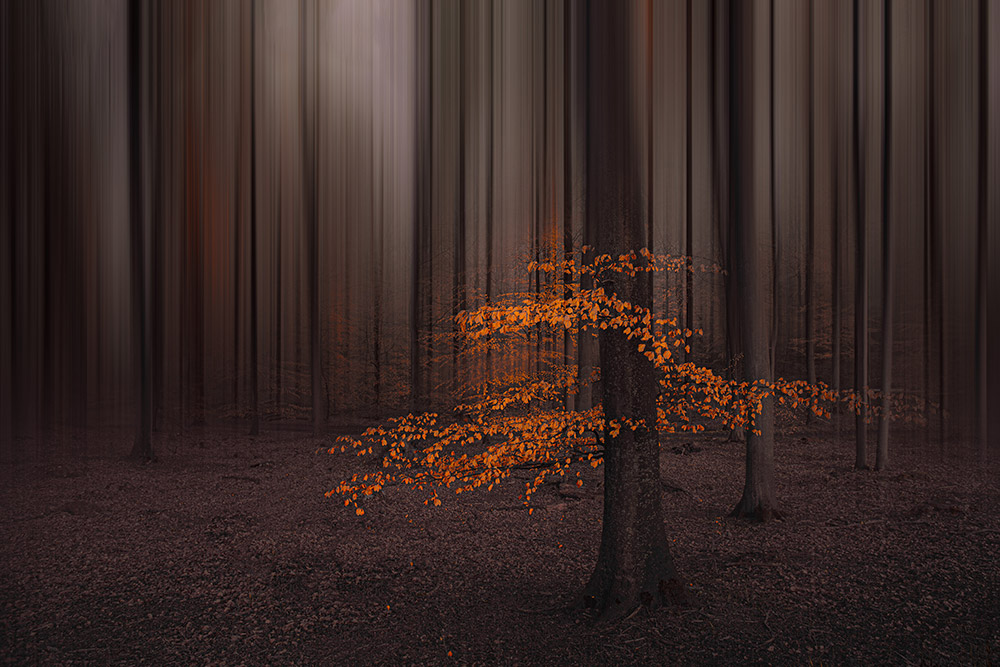 This image is a creative and imaginative take on the classic autumnal woodland shot, in which Inge has cleverly combined techniques to create an original result. The stillness of the tree set against the Intentional Camera Movement background is intriguing and keeps the viewer interested, while the restricted colour palette of warm tones is carefully considered. The subtle orange stripes in the ‘moving’ background echo the golden leaves without being overpowering. 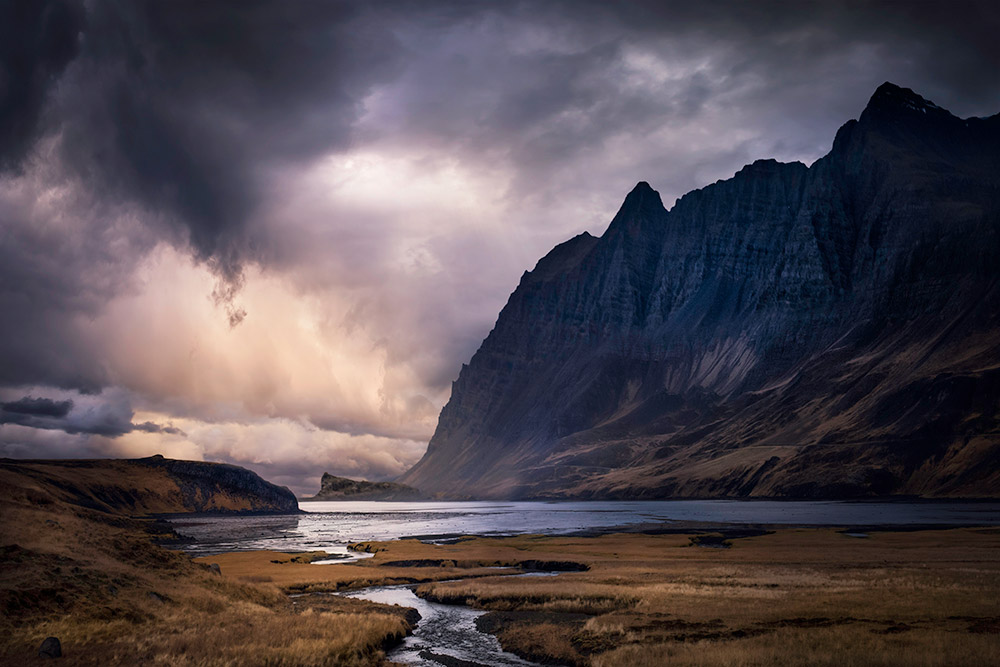 This shot is all about the ominous incoming storm, with its dramatic clouds and contrasts in light. The viewer can feel what is about to break overhead. This, set against the dark, foreboding peaks of the mountains to the right of the frame, creates an overall picture of elemental forces that are always going to be bigger and more powerful than the humans who photograph them. Despite what must have been fast-moving conditions, Doug took the time to compose carefully, with the foreground stream leading through the frame and taking our eye to just the right point in the scene. 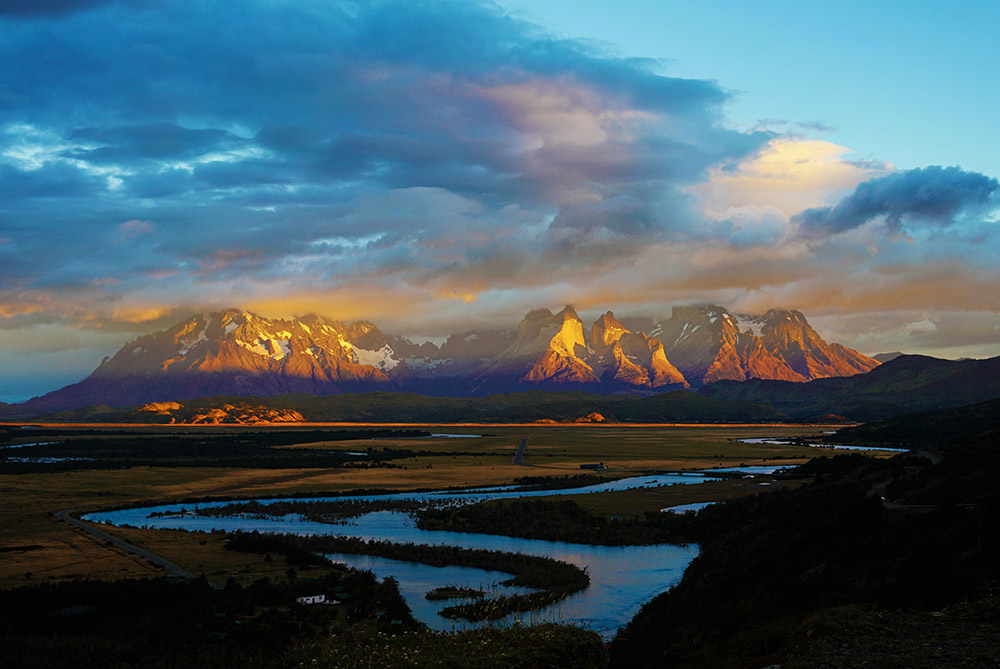 Some scenes just make you slam on the brakes and rush out with the camera – and this is a case in point, as Tina was on her way to the airport when she witnessed this spectacular play of light on the mountain range in the distance. Despite the hurry to get the shot, she has composed well, with the rivulets in the foreground leading the eye nicely towards the horizon. The blue ‘borrowed’ light balances with the sky, and then there’s the gorgeous strip of orange in the centre. A great shot that was absolutely worth stopping for. 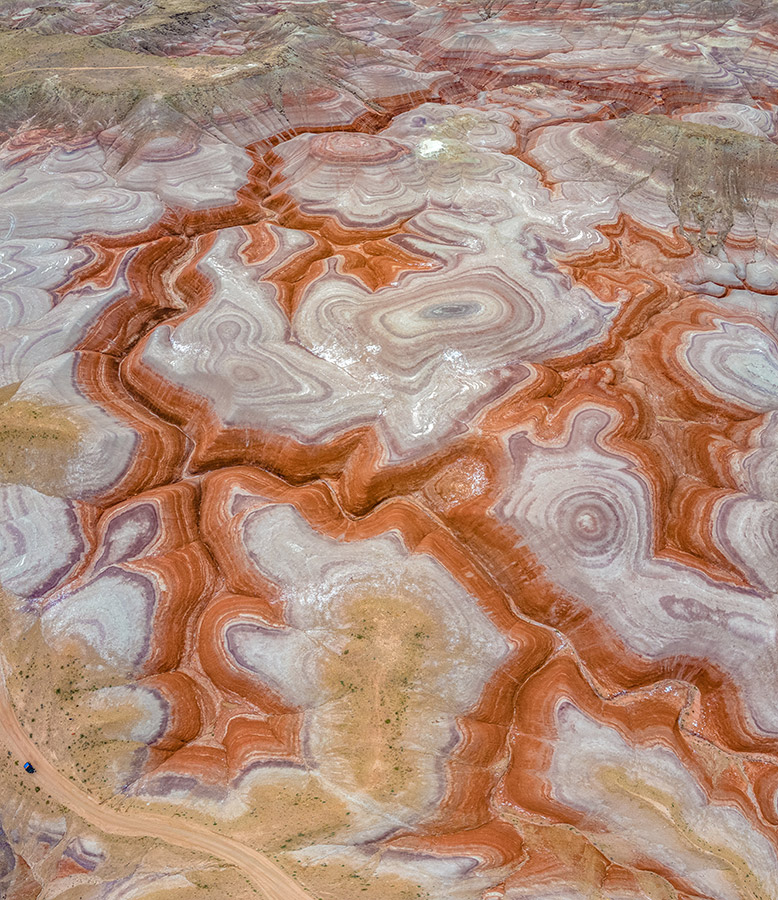 Similarly to Nguyen Tan Tuan’s second-placed shot, at first glance this image appears to be a close-up of the patterns in rock formations. However, at closer scrutiny, we see a minuscule jeep heading out of the bottom-left corner of the frame. It’s details such as this that make an image stand or fall, and in the case of this drone shot, it makes the viewer appreciate the breathtaking scale of the landscape below, and the geological formations that will have taken aeons to be created. Ryan has controlled the composition nicely, with the rust-coloured tracking contained well within the frame, and in such a way that allows our eye to travel round it coherently. An image that is worth spending time with. 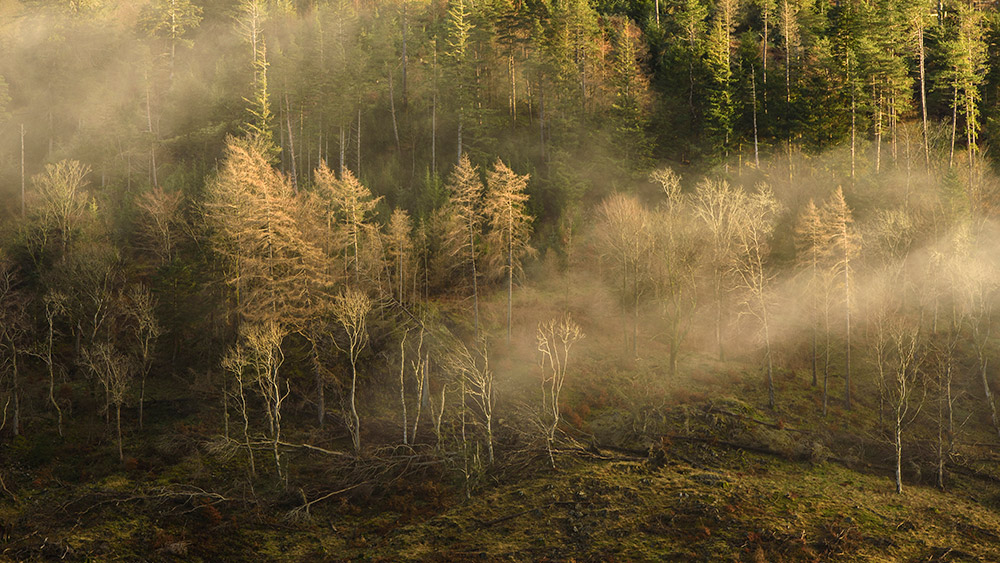 ‘This is not a classic landscape photograph in that it’s shot with a telephoto and doesn’t rely on foreground interest to background subject. Instead, it has a very specific and emotive mood. The light catching the trees, the hint of mist – enough to add atmosphere but not so much as to obscure the woodland behind. There are no distracting branches or trees at the edges of the frame, and the mist rolling in on the right leads the eye to the main focal point of the image, the trees catching the light. The mist creates diagonal lines to complement the uniform vertical lines of the trees. It’s an image that could be easily overlooked, but that’s part of the charm.’ – Verity Milligan, Guest Judge 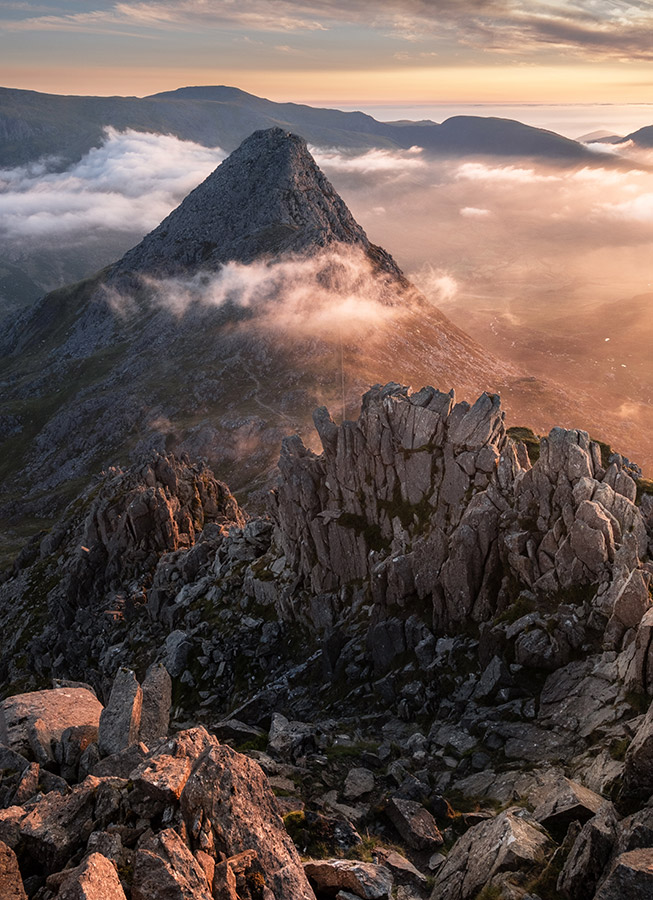 It looks as if it took a great deal of physical effort to get this shot, but it was worth it. The soft light is simply lovely – particularly the way it kisses the rocks in the bottom-left corner and highlights both the middle and distant areas. The mist was an absolute gift, but Jay has timed his shot to make the most of it, capturing it floating in front of the peak to give the image depth and dimension. It’s a great study in contrasting textures, muted tones and lovely use of subtle light. It’s unlikely that many of us will ever visit this point ourselves, but this image transports us there beautifully. Jay’s image is this rounds highest scorer for Camera Clubs! 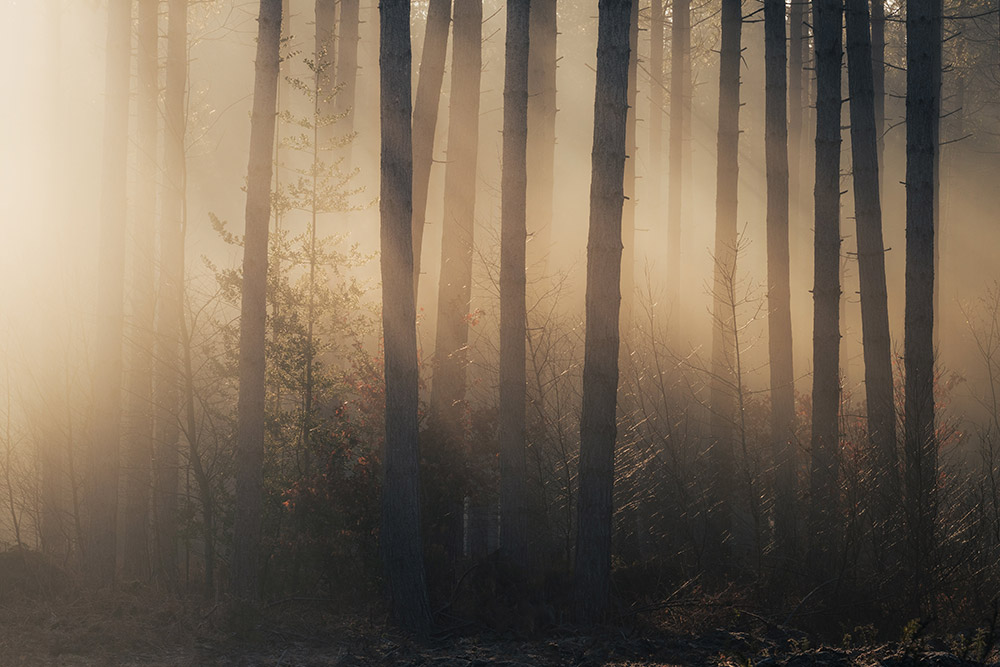 ‘This is an excellent image that demonstrates a real understanding of how to work with (and manage) light. The uniformity of the trees contrasts with the light streaming through from the left, providing separation from the trees in the foreground to the trees behind. It has a really lovely atmosphere to it and the processing is perfect: not overdone, but just enough to bring out the mood. These are the conditions that most landscape photographers hope for, especially at sunrise, and Jamie has made the most of them with this shot.’ – Verity Milligan, Guest Judge 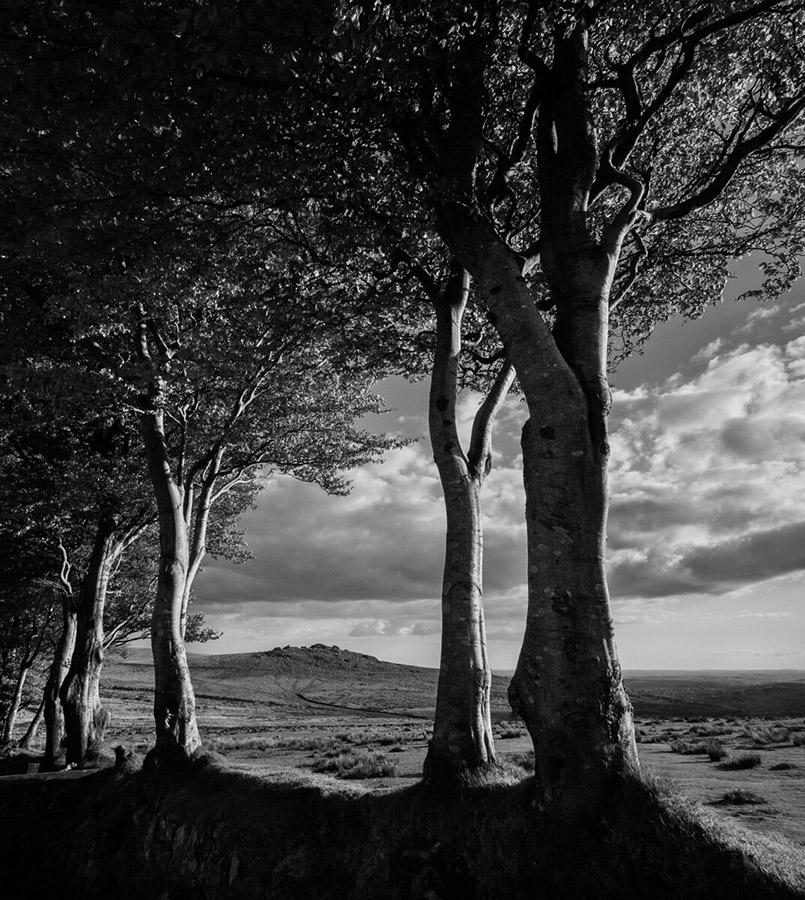 Mike is a member of Bristol Photographic Society, and he chose it from the dropdown menu when he uploaded his image – winning his club ten points in the process. By shooting into the light, Mike has brought out the texture and shape of the trees, while also capturing more distant detail to give the image context. Converting to black & white means the viewer can concentrate on the tones and formation of the trees, without the distraction of colour. Composing so that the slight hump in the horizon falls between two of the trees was a good decision, too.

As with last year, the camera club that accumulates the most points wins a £500 voucher from MPB and a feature in AP, so keep those entries coming in!

The 2022 leaderboards following results of Round Four, Landscapes

With the results of Round 4 in, APOY veteran Marco Tagliarino has jumped not only into the top ten but also into first place with his atmospheric image, demonstrating just how fluid the leaderboard is from round to round. There are plenty of other photographers hot on his heels, though, and we anticipate a lot of changes to the top ten in the coming rounds. The Young APOY leaderboard is equally tight, and we expect to see an increasing separation between those on joint points as the competition continues. There are still plenty of points to be won and six rounds to go, so those clubs that are pursuing Launceston Camera Club
are still in with a very good chance.

In fifth place, Inge Schuster shot her unusual and atmospheric forest scene using a Canon EF 20mm f/2.8 USM – a lens that was launched in 1992 but has never been updated. Weighing 405g, with a maximum aperture of f/2.8 and a 25cm closest-focusing distance, it’s a versatile optic. And although it’s autofocus, it has instant manual override. The metal mount keeps it sturdy. This unusual lens is available at MPB for £274 in excellent condition. 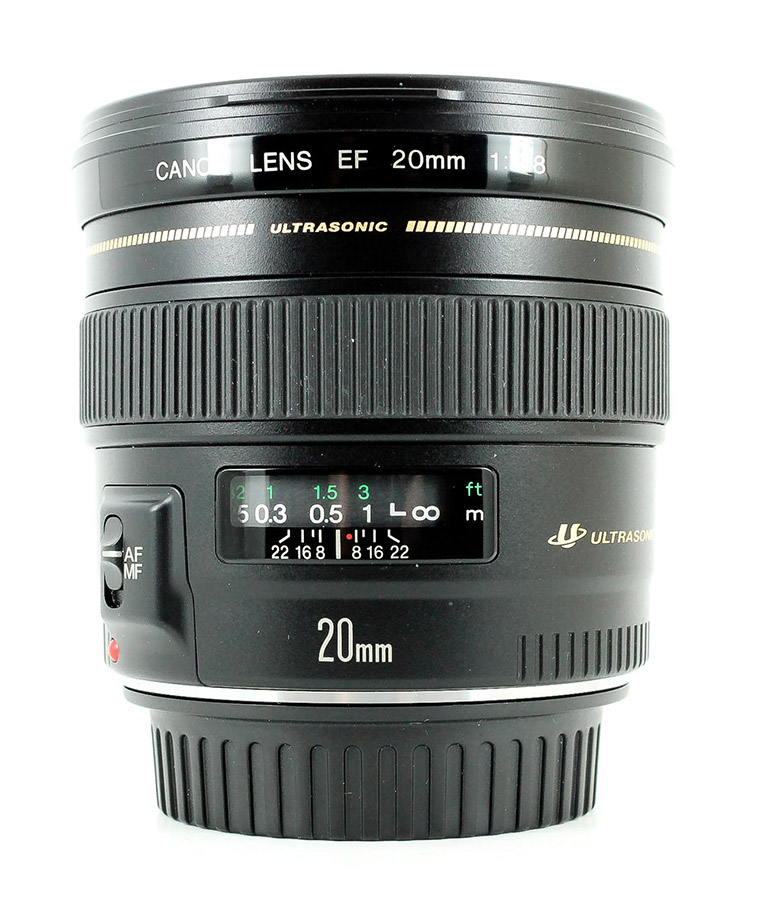 Peter Henry, who was awarded ninth place, took his ethereal shot at the long end of a Nikkor 70-200mm f/2.8G ED VR II. This fast-aperture telephoto zoom has Vibration Reduction, which allows handheld shooting at 3.5 stops slower than normal, as well as fast, quiet autofocus. It displays excellent edge-to-edge sharpness and boasts a very solid construction. This lens can be purchased at MPB for between £419 and £684, depending on condition. 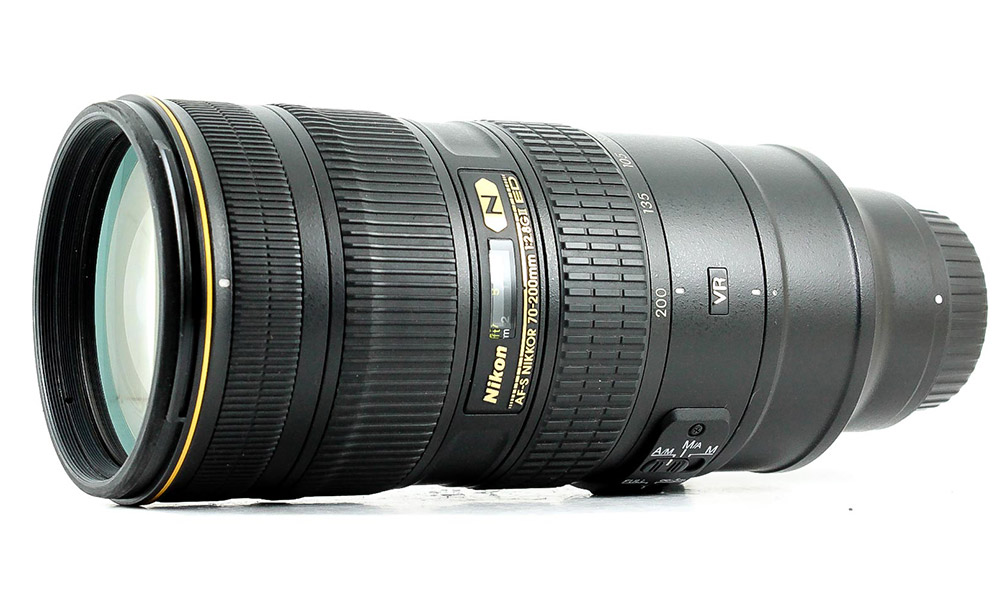 Taking tenth place in the Landscapes round, Jay Birmingham used a Fujifilm XF 10-24mm F4 R OIS for his mountainscape. Equivalent to a range of 15-36mm in full-frame terms, this versatile wideangle-to-standard zoom is dust and moisture resistant, features improved optical image stabilisation and has an updated aperture ring with f-stop scale and auto position lock. It was awarded 4.5 stars when reviewed in AP and is available at MPB for £559 in like-new condition. 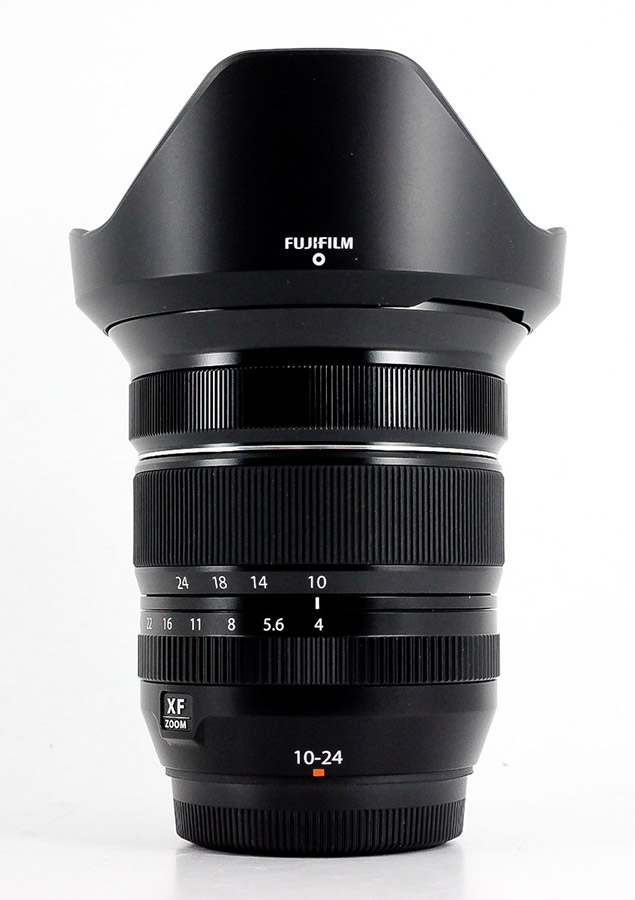