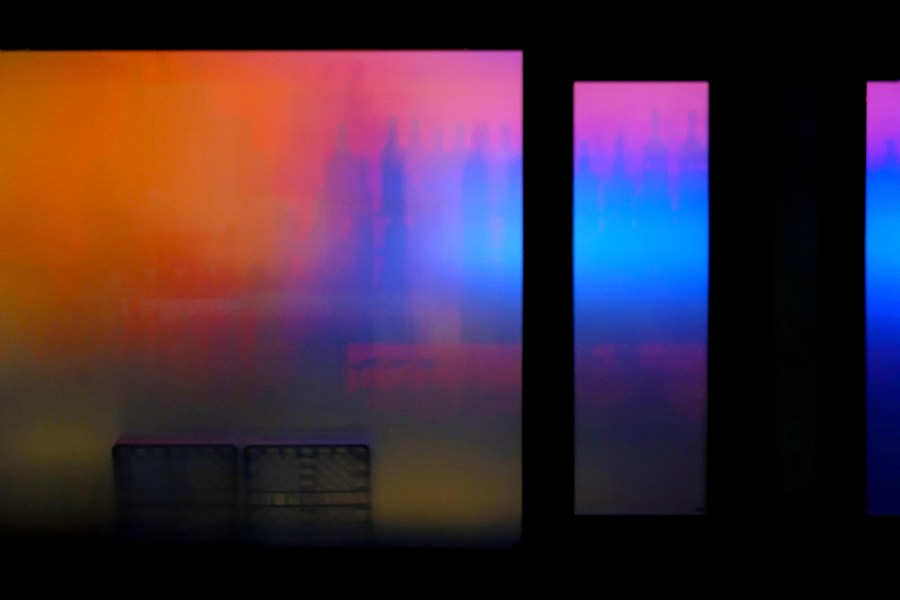 Here are the top ten images uploaded to Photocrowd from Round One, Low Light, with comments by the AP team and our guest judge

Low light is like catnip to the photographer. As light drops and reduces, it gives dimension, depth, colour and atmosphere to a photographic image, allowing previously ordinary scenes to gradually come alive. Low light has the power to either reduce a potential composition to its basic elements, or it can introduce a riot of conflicting tones and colour temperatures. It’s no wonder that generations of photographers have exploited it to their advantage.

Round One, Low Light Top Ten

Tommaso’s superb capture has everything you want from a candid, low-light image: boldness, simplicity, atmosphere and colour. It also has an excellent sense of place – anyone who’s been to London could guess it was taken in Piccadilly Circus. The man’s silhouette and the way it dominates the frame is beautifully captured, and Tommaso has also timed it expertly, ensuring there is space between the figure’s fingers and his face. Any closer, and they would have merged into a far less coherent shape. Thanks to the wide aperture, the background has blurred nicely but remains defined. An excellent shot of which Tommaso should be very proud. 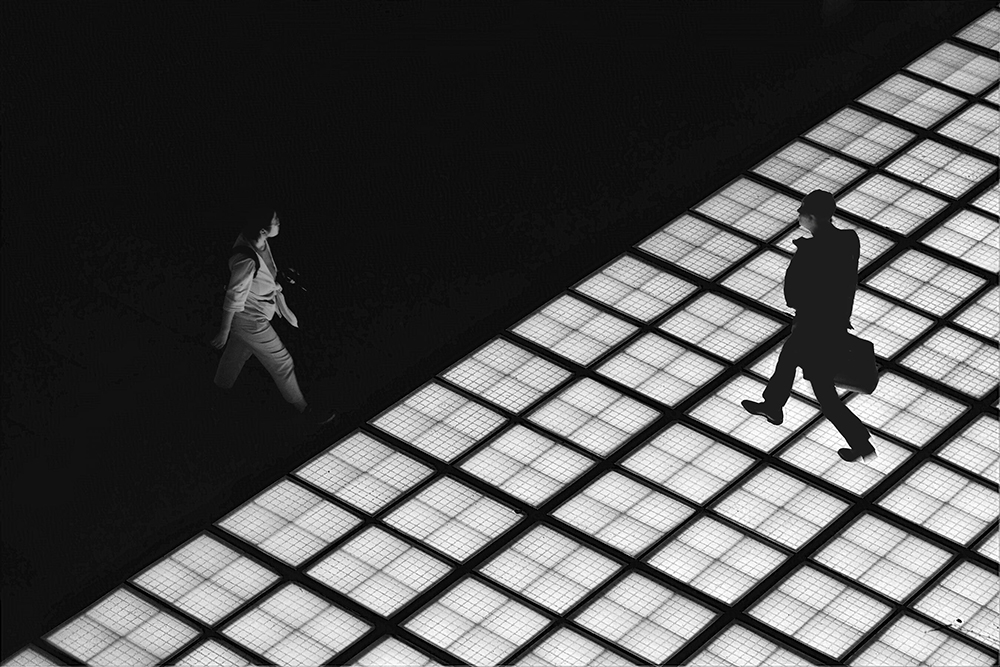 This shot is a great example of less is more. Tom has reduced the scene to a skeleton of elements, and it is all the more powerful for that. The two figures set up a tension and an interesting dynamic, with one of them appearing to walk into the light and the other into the shadow. The powerful diagonal line slices the frame into two triangles, which is a strong compositional device. It was also particularly bold
to create so much contrast that we have light and dark, but very little in between. A great piece of graphic art. 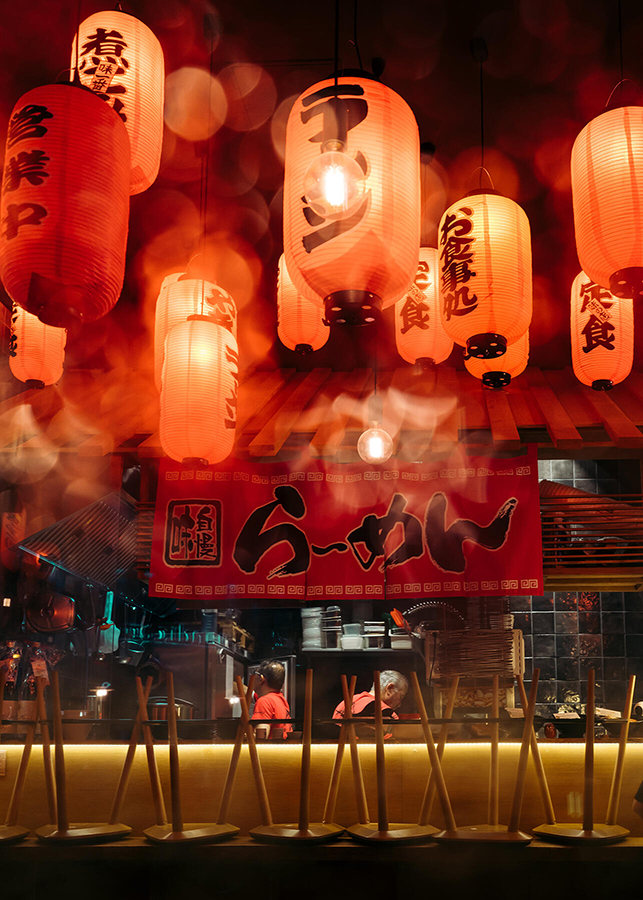 In opposition to the first- and second-placed images, this shot by Frederic is busy – but it’s never confusing. Shooting through a rain-covered window was risky, as the results could have been too muddled. However, the clear shapes of the upturned stools, which ground the image at the bottom, as well as the defined lettering on the lanterns, and the timing that has placed the waiters in between the stool legs, ensure the scene retains clarity. 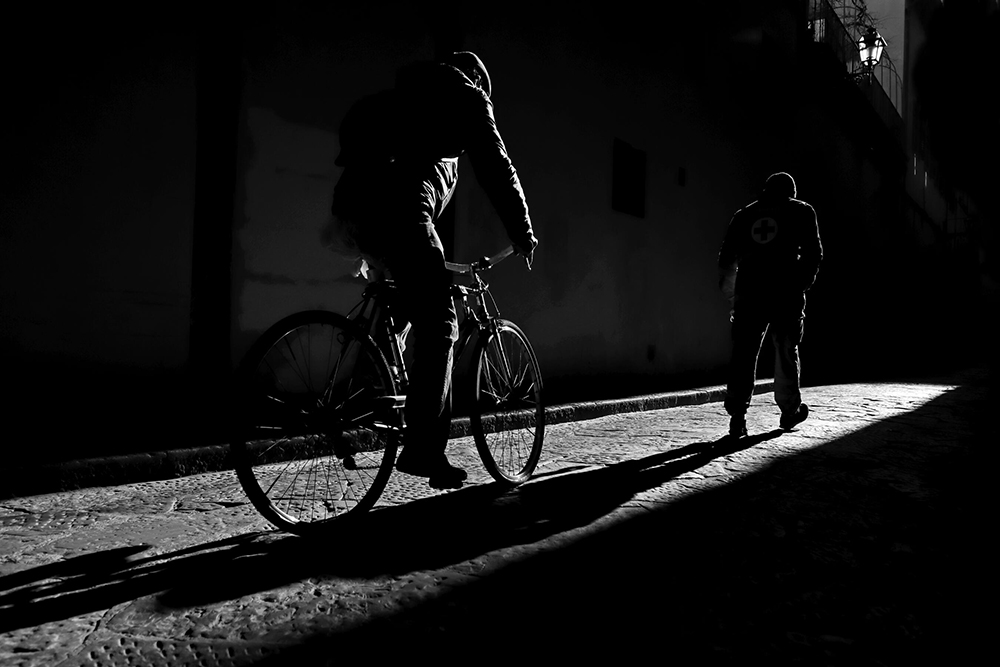 A classic, black & white street shot, well executed, is always going to capture people’s attention. Laura has done an excellent job here, shooting from a low angle to emphasise the lines, angles and shadows within the frame. Timing the shutter release to ensure both men are within the bright area is crucial to the success of the image, and the fact they are both moving away from the viewer, into an unknown place, injects a sense of mystery into the shot. 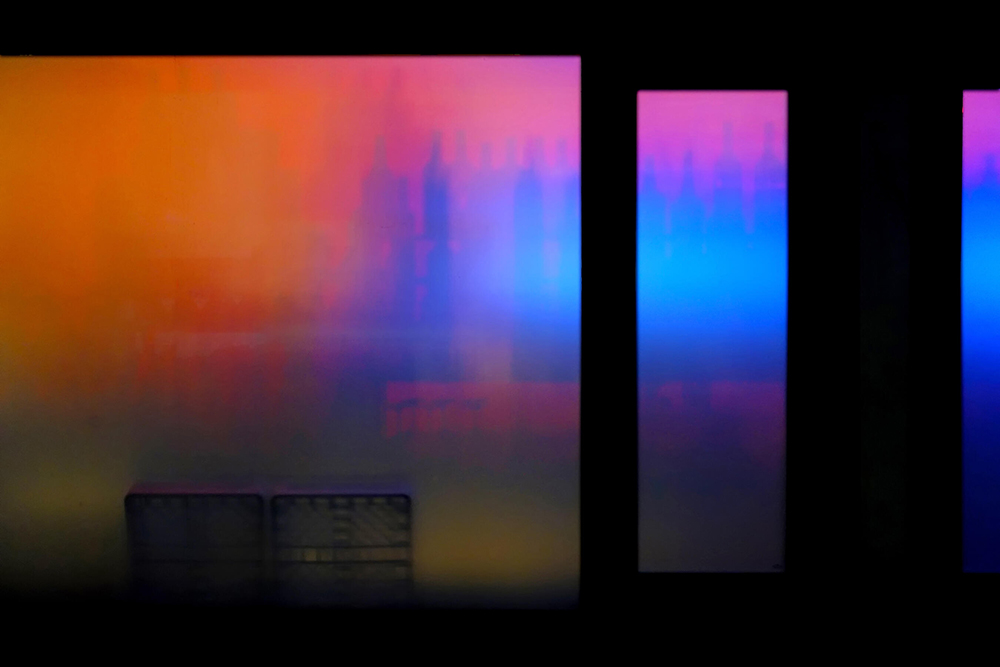 In earlier reviews, we have championed clarity and simplicity, but this shot by Bogdan demonstrates how to go against all the ‘rules’ and still make a successful image. It is abstract to the point of almost being a Rothko painting, with the main focus being the blur of colours melting into one another. The bold, black lines of the window frame help give context and we loved the ambiguity of the shadowy shapes towards the top of the frame. What we thought might be a city skyline turns out to be silhouettes of wine bottles. Cleverly done. 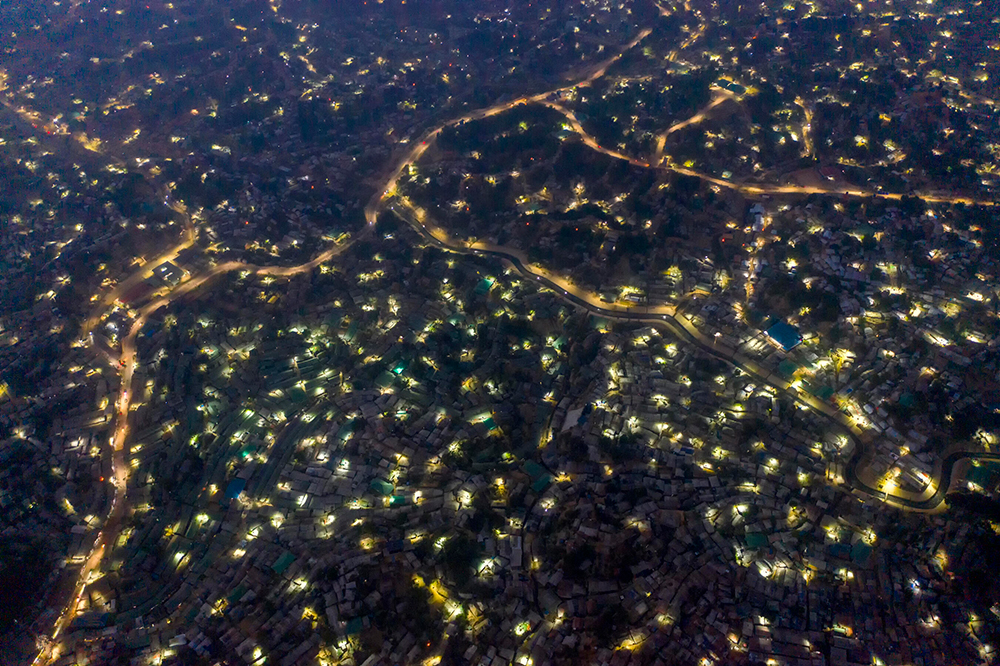 At first, it is difficult to make out what we are looking at here. Is it a mass of fireflies? A city shot from above as a plane comes into land? The latter is closer to the truth, as what Azim has captured is a drone shot of the Kutupalong Rohingya refugee camp in Bangladesh, and multiple dots of brightness are the lights within the tents these people have been forced to live in. A sobering image which conveys the scale of the crisis facing the 1.1 million people who have had to flee Myanmar. 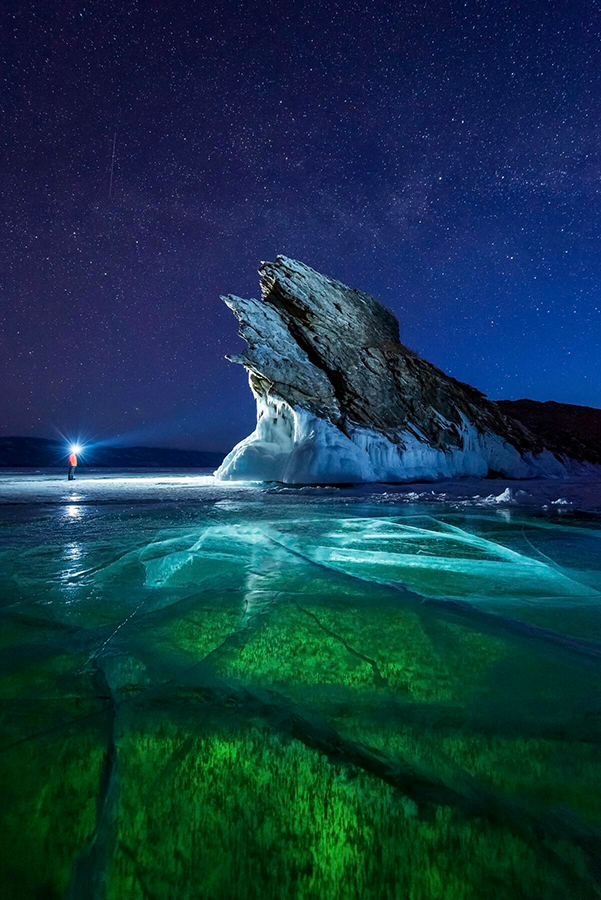 ‘This is such a magical image. The figure, which has been beautifully placed in the frame, gives an awesome sense of scale against the huge, jagged face of the rock, and the whole thing is brought to life by the backdrop of the starry sky. It can be very tricky to shoot in low-light conditions such as these, but this image has been executed perfectly, and has a real sense of adventure.’ 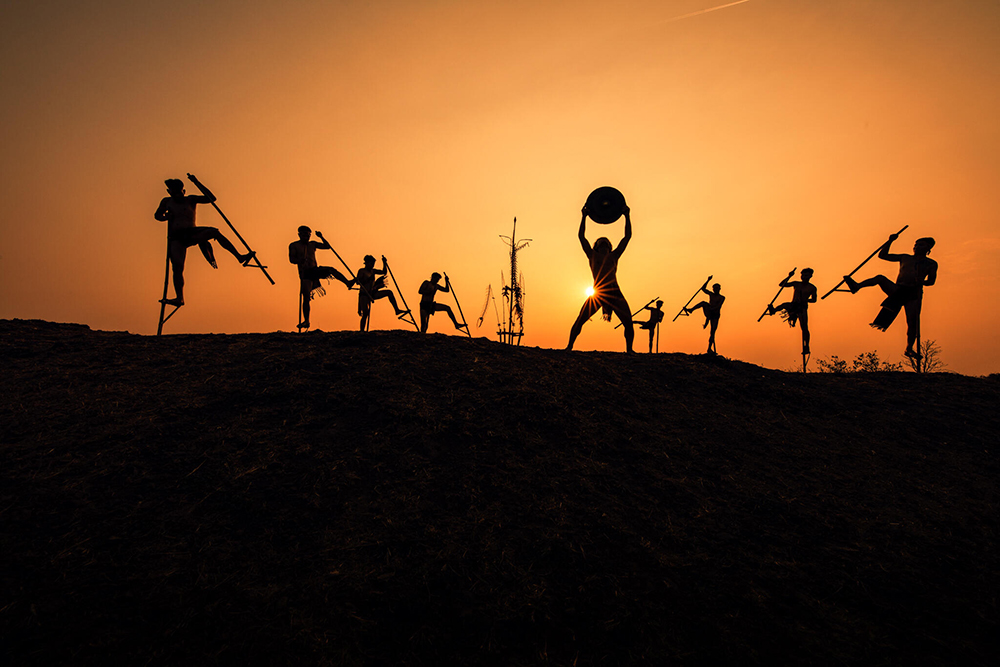 A silhouette is the perfect way to show off shape and form in the simplest possible way. Nguyen has done just that here, with his atmospheric shot from the Central Highlands of Vietnam. It is balanced without being too symmetrical, which adds to the overall dynamism of the composition.

We also like that the middle figure, closest to the camera, is slightly off-centre. And, of course, it’s been sensitively composed, with the setting sun just peeking out from behind him. It also demonstrates the power of reducing a shot to just two colours. There is nothing to distract, so the viewer is left to concentrate on the action unfolding in front of them. 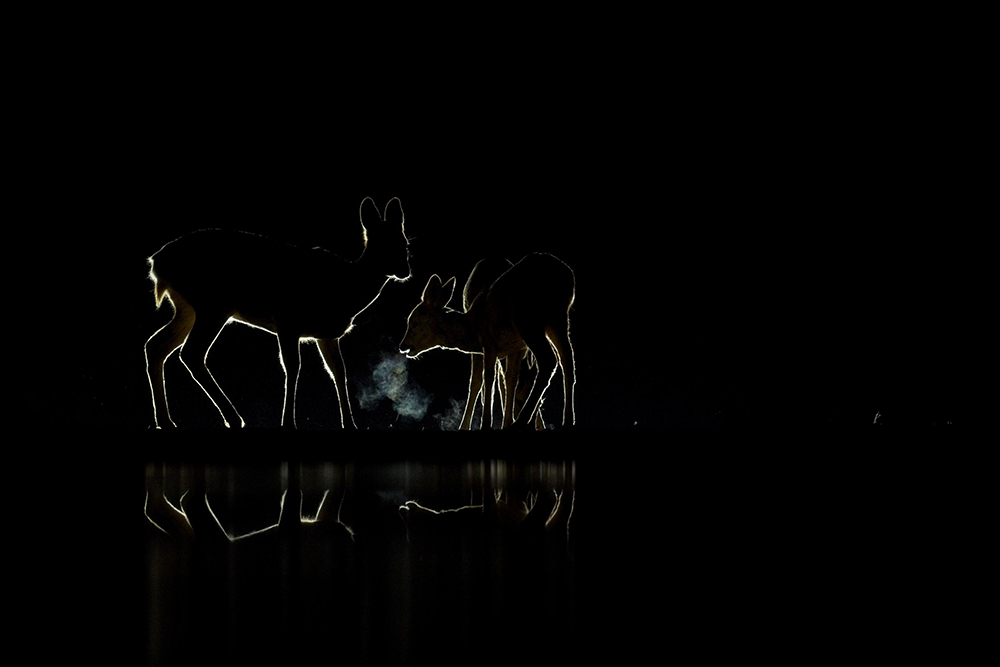 You don’t get much lower light than this almost pitch-black image. Yet despite the only information coming from the rim lighting, the viewer instantly knows these are roe deer.

The composition is well balanced, with the deer placed towards the left and just enough of their reflections included at the bottom. If they were any smaller in the frame, the inky-black would have become overwhelming. Overall, a sensitive, compelling picture. 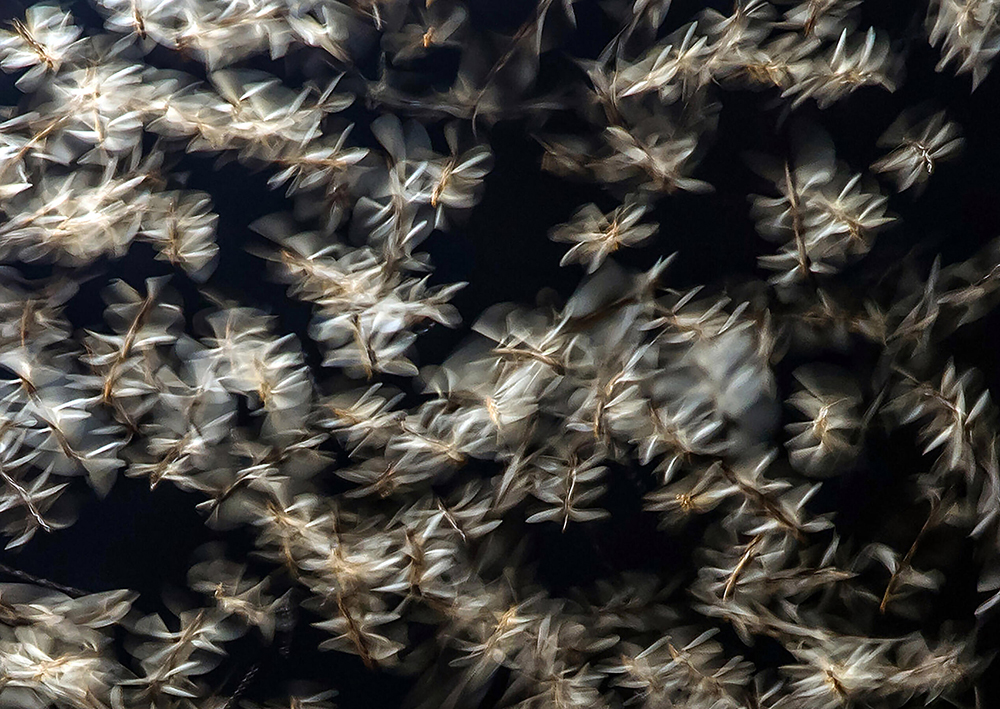 At first glance, the frame-filling objects in this photograph appear to be falling, spinning flowers or petals. They are, in fact, termites flying around a neon light following several hours of heavy rain. Sirsendu chose exactly the right shutter speed: it reveals detail in the insects’ bodies and creates enough blur to show movement but still gives separation between each termite. Any slower, and it would have been a blurry mass, with little definition.

This shot has been boldly composed, and shows Pubarun has confidence in his ability to tell a story. Placing the three boys so far to the right of the frame is unconventional, but this is balanced by the line being thrown into the river. There’s a sense of the boys being together but apart – each of them doing something different. And, of course, the timing is superb. Capturing the boy on the left, as he topples into the water, at the same time that the boy on the right’s line is at its full extent, shows excellent skill. 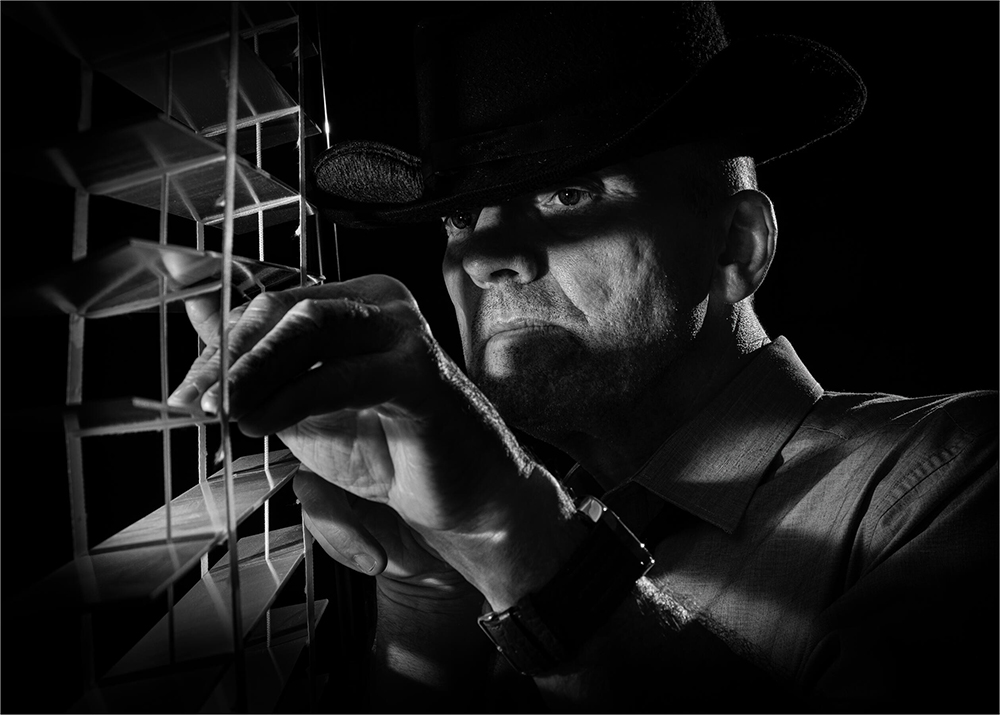 For the second year running, camera club members accumulate points for their club by choosing it from the dropdown menu when uploading their images to Photocrowd. Whatever points the image is awarded, the camera club is awarded, too. At the end of the year, the club with the most points wins a £500 voucher to spend at MPB.

Tracey Small is one of seven members of Launceston Camera Club to have had an image shortlisted in Round One. Her image has a film noir feel to it, and is very nicely lit and composed. She obviously had a clear idea of what she wanted from the shot, and has executed it well. It has bags of atmosphere and was deservedly shortlisted.

So, get organised! The more members who enter, the greater your club’s chance of winning.

It’s very early days, so impossible to tell right now how much the leaderboard will change between now and Round Ten of APOY. Tommaso Carrara sits at the top with 100 points for his excellent winning image, but with nine rounds still to go, there are still a lot of points to hand out.

Who knows? It could be you at the top next month! Young APOY is equally up for grabs, but India’s Pubarun Basu is off to a good start, with two images in the top ten (but, as always, only the highest-scoring shot in any one round is awarded points). In our camera clubs category, the familiar name of Launceston Camera Club tops the leaderboard, with Kempsey Camera Club in a strong second place.

It also has excellent video capabilities and was given five stars when reviewed in Amateur Photographer in October 2018. At launch, this camera had an RRP of £1,349, but you can now pick one up in like-new condition at MPB for £774. 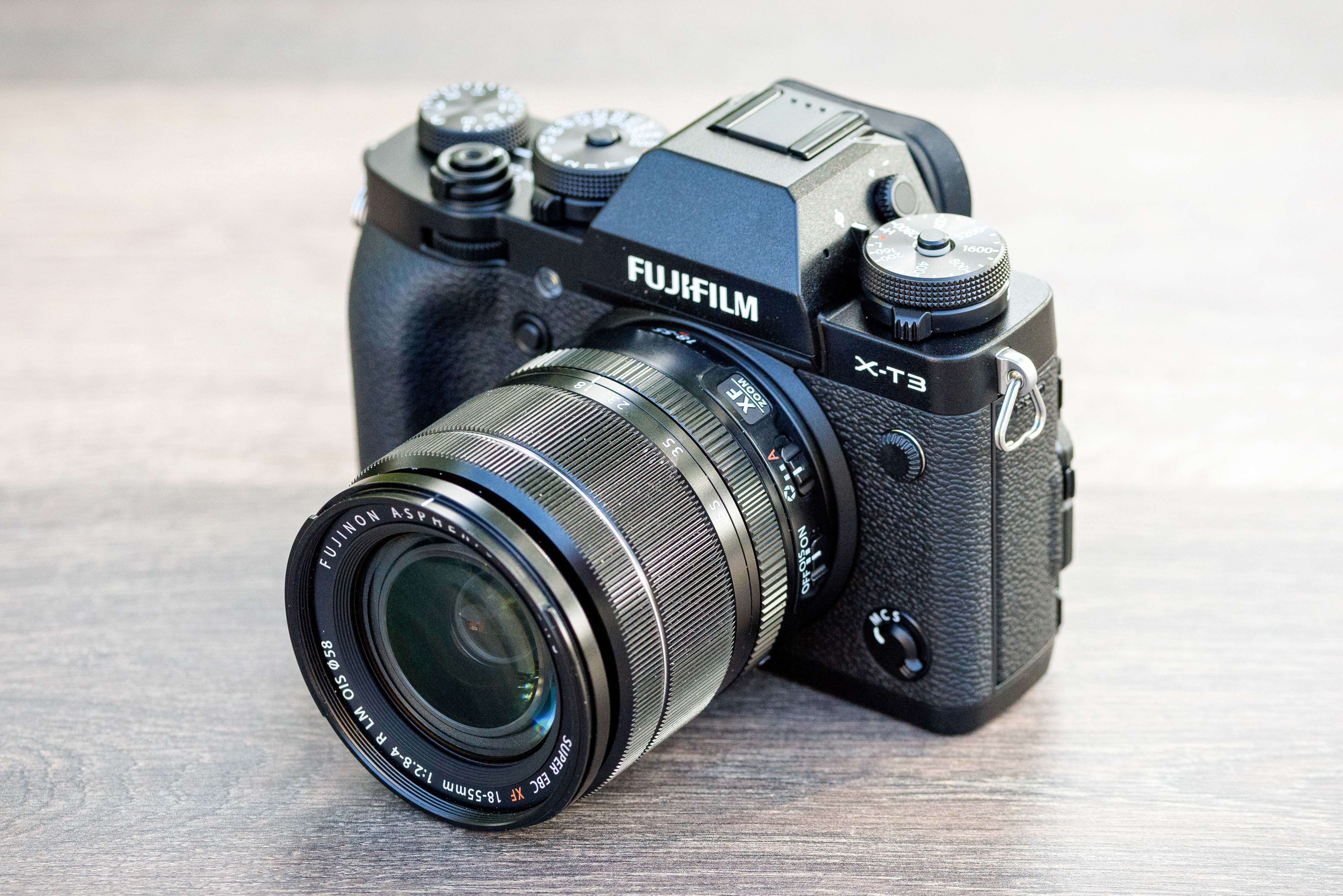 Equally versatile and intuitive to operate is the Sony A77 II, which Tom Ponessa used for his eye-catching second-placed shot. Launched back in 2015, this mirrorless camera’s spec includes a 24MP CMOS sensor, 12fps continuous shooting, 2.4-million-dot viewfinder, and excellent build quality and autofocus.

Its high-ISO shooting quality is excellent, too, making it a good choice for low-light shooting. MPB has stocks of this camera body starting from £284 for a heavily used example, up to £484 for one in good condition.

Coming fourth with her atmospheric street shot, Laura Allegri shot using a Canon EOS M50 Mark II, a compact-sized mirrorless camera which has a 24.1MP APS-C sensor and ISO range of 100 to 25,600. It is capable of 10fps shooting and has a 2.36-million-dot viewfinder and fully articulating LCD touchscreen. The Mark I version of this model (which includes all the above features) can be found in like-new condition at MPB for £459.