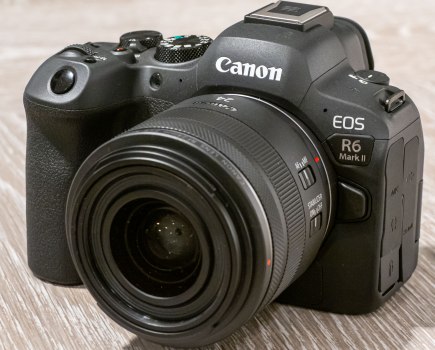 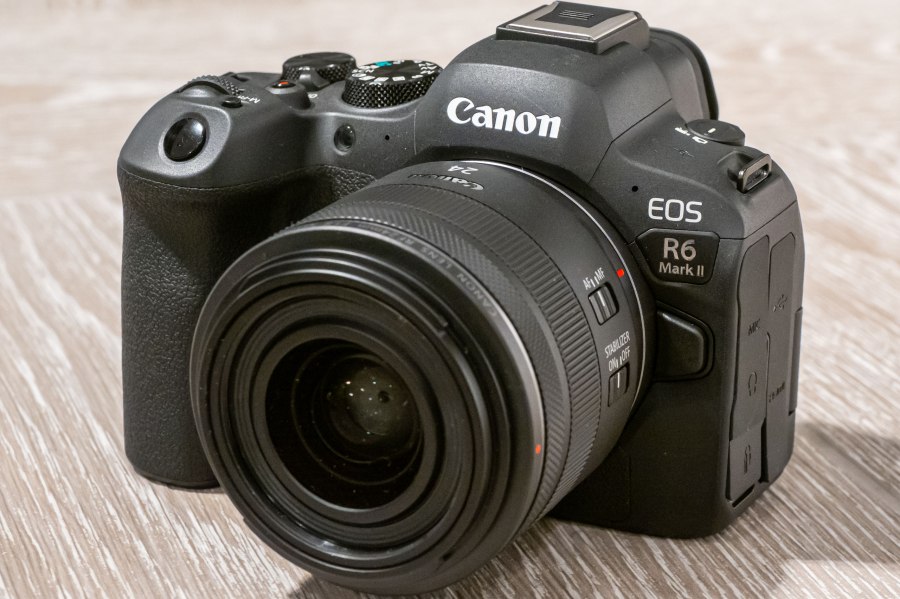 It’s only a shade over two years since Canon introduced its original enthusiast-focused EOS R6, alongside the 45MP EOS R5. While its high-res sibling grabbed all the headlines, the more affordable model established itself as the realistic choice for serious enthusiast photographers, winning our Product of the Year award in 2021. Now the firm has set about giving it a major update, with the new Canon EOS R6 Mark II gaining a brand-new 24.2MP sensor in place of the previous 20MP version. There’s also an array of feature updates and a couple of small but significant design tweaks. 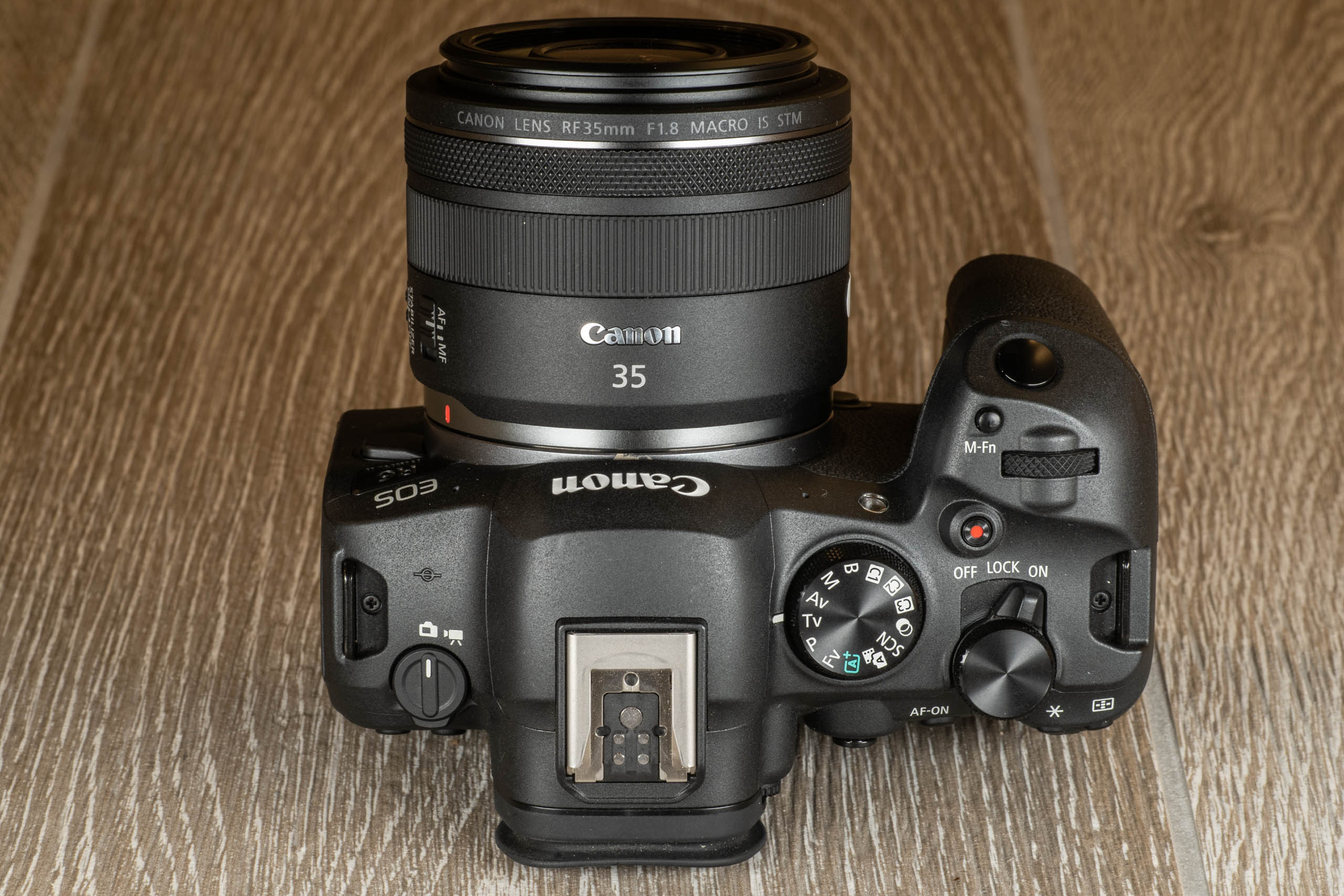 This top view shows the two main control changes, with a photo/video mode switch on the top left, and the power switch moved to the right side. Image credit: Andy Westlake

Firstly, let’s consider the new 24.2MP Dual Pixel CMOS AF II sensor. While it shares the same resolution as the high-end EOS R3, it doesn’t employ the same stacked architecture for ultra-fast readout, or even a backside illuminated design. However, Canon claims that it delivers the same low-light performance as its 20MP predecessor, with a standard sensitivity range that extends all the way up to ISO 102,400 and is extendable to ISO 204,800. It also supports autofocus in light levels as low as -6.5EV. Another boon for low-light shooting is the camera’s in-body stabilisation, which is rated for up to 8 stops shake correction. 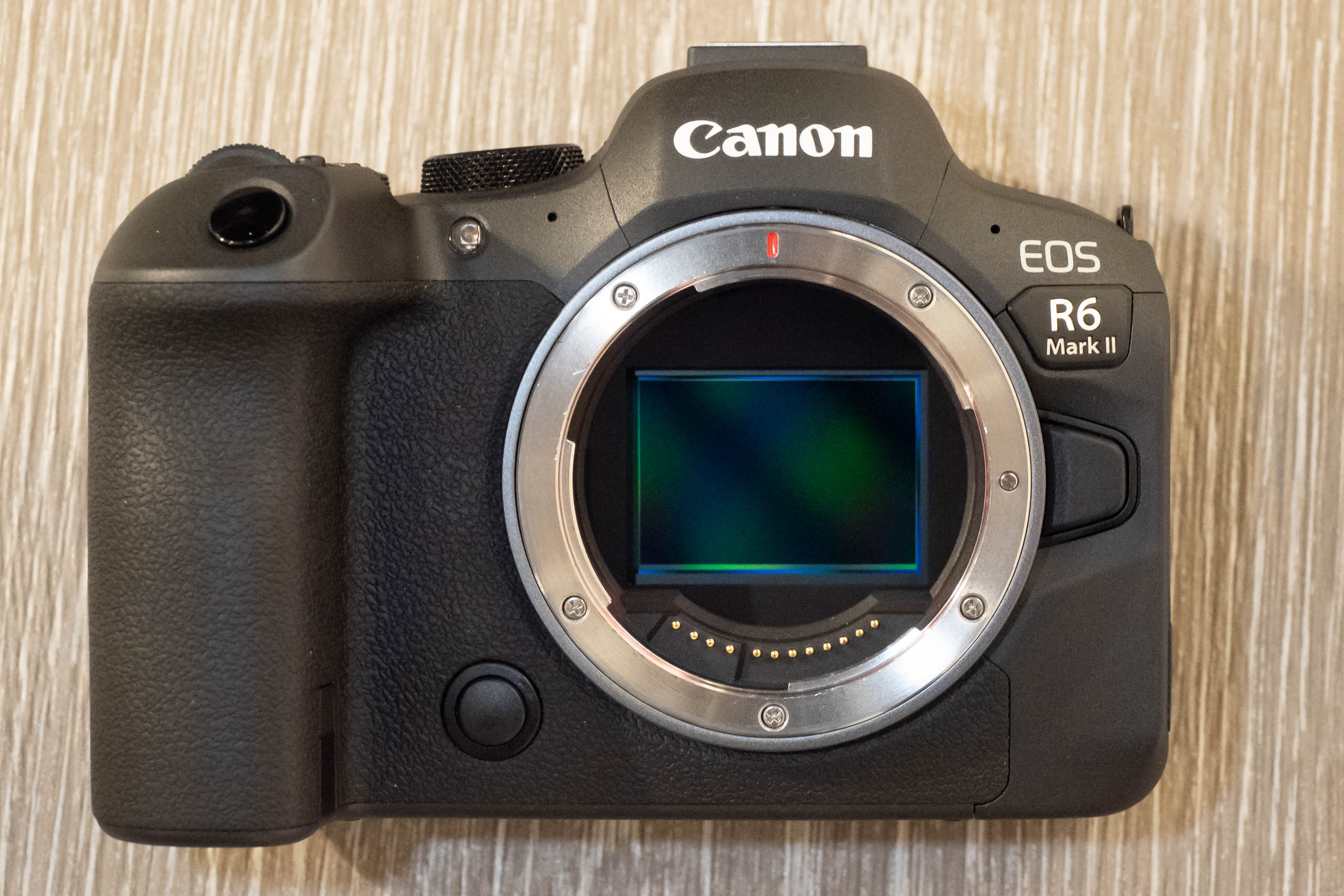 On the subject of autofocus, the EOS R6 Mark II builds on the subject detection AF system previously seen in the EOS R3, with the camera now capable of recognising aircraft, trains and horses (including, rather wonderfully, zebras), as well as humans, cars, animals and birds. Rather than having to pre-select the subject type, you can also leave the camera to detect automatically what it’s looking at.

Subject tracking is available in all focus modes and can be quickly toggled on and off by pressing the SET button in the middle of the rear control dial.  Just like with the EOS R3, this should make it very quick and easy to use (Sony could learn a thing or two from Canon in this regard). 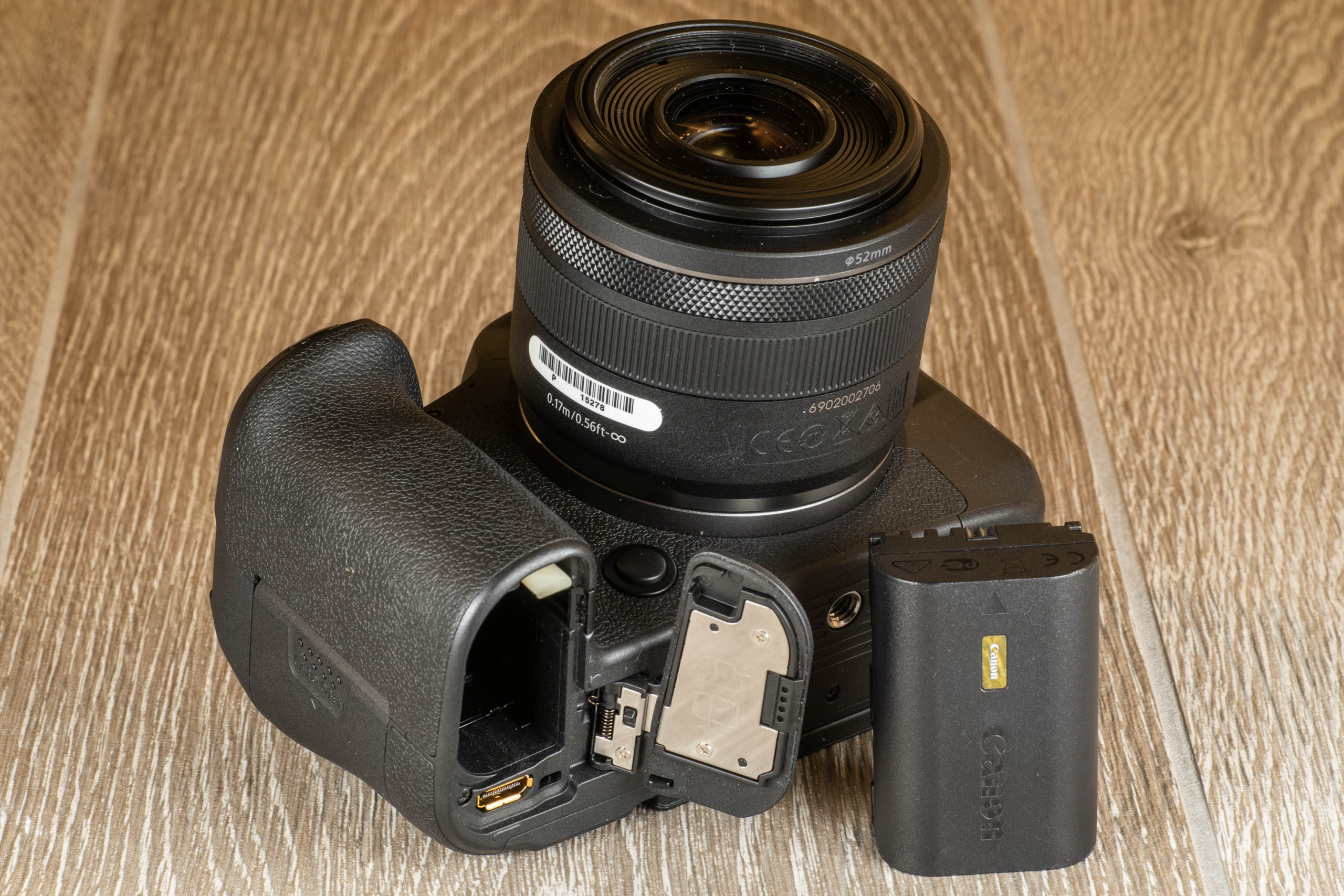 The EOS R6 Mark II is also the quickest-shooting camera in its class, being capable of 12 frames per second in full-resolution raw using its mechanical shutter, and a remarkable 40 fps with the electronic shutter (20fps and 5fps settings are also available if you don’t need to shoot quite so fast). Canon says that faster sensor readout speeds should reduce the risk of rolling-shutter distortion.

The buffer is impressively deep too, at 190 JPEG or 140 C RAW files in a single burst. Select Raw Burst mode, and the camera can shoot at 30fps with 15 frames pre-captured before the shutter button is fully depressed, which should allow you to capture fleeting moments when you wouldn’t otherwise be able to react in time. 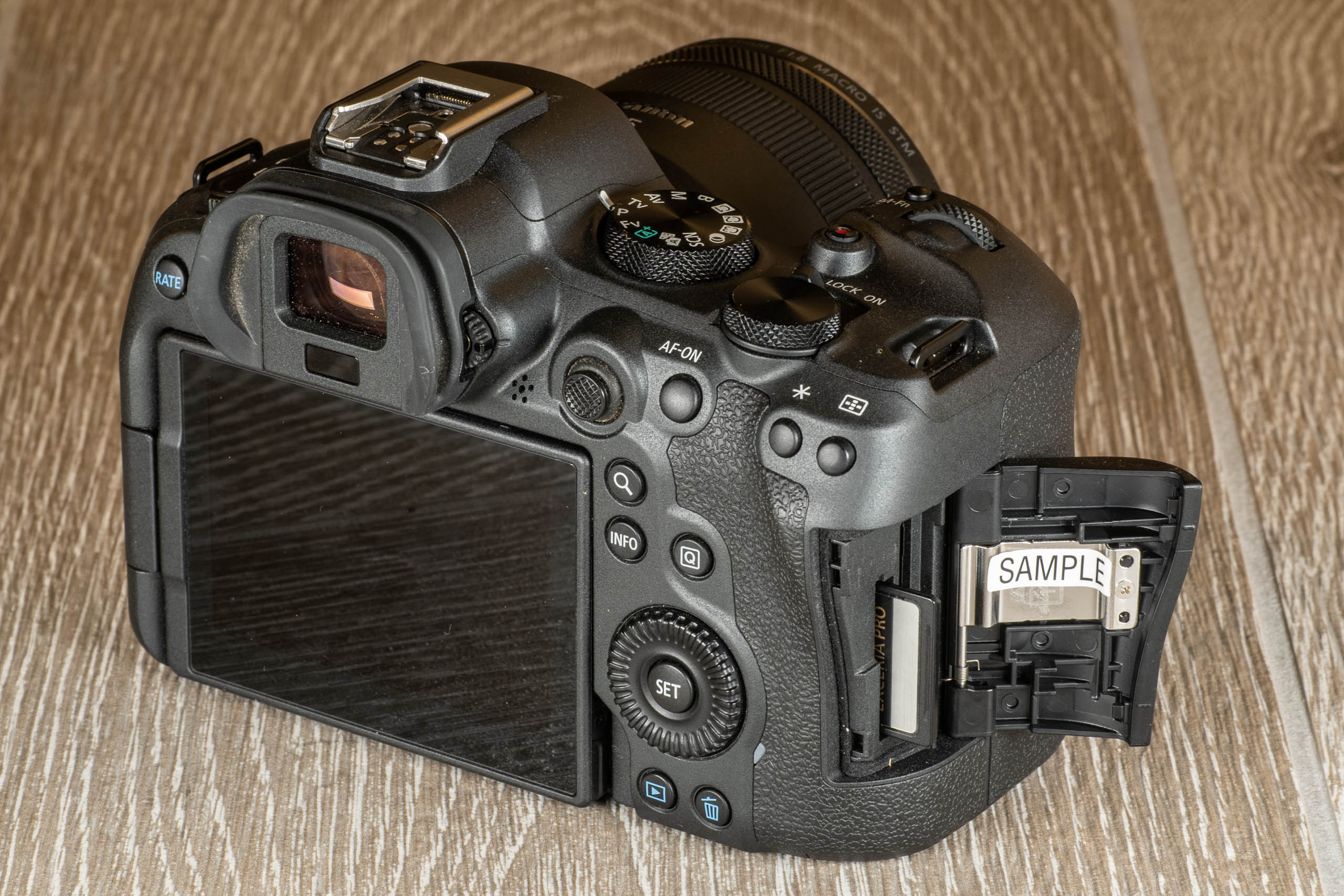 Another area where the specs impress is with regards to video. The camera offers 4K recording at 60 fps from the full sensor width, which is oversampled in 6K for increased detail. It can also output 6K 60p ProRes raw to an external recorder over HDMI, while Full HD slow motion recording is available at 180fps.

Interesting new features include focus breathing compensation to correct for any change in the angle of view when pulling focus between different distances, and ‘face only AF’ where the camera won’t attempt to refocus when a human subject walks out of shot. There’s even a movie pre-recording option, where either 3 or 5 seconds of footage can be continuously buffered before you start filming, so you don’t miss a key moment of action. 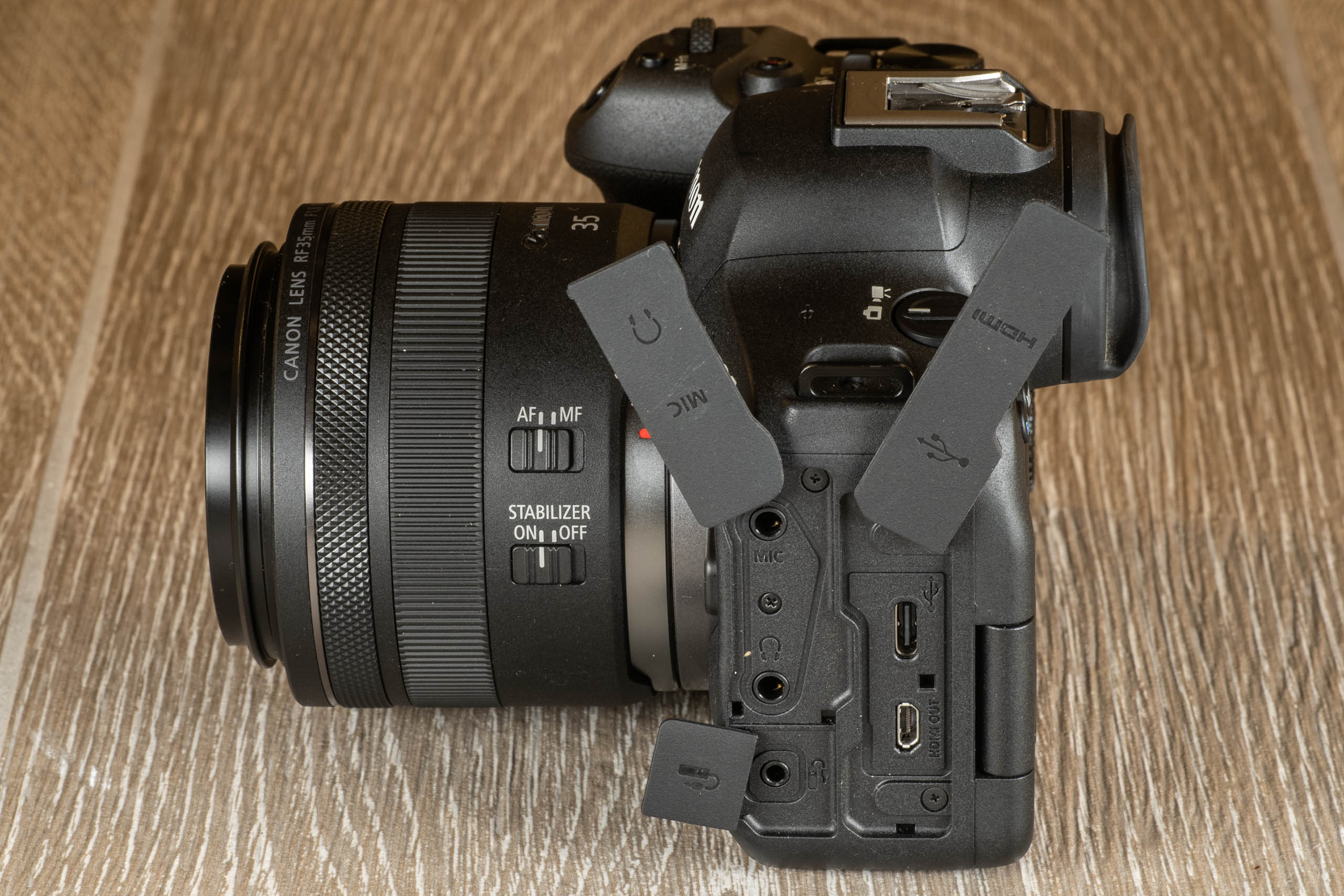 Microphone, headphone and cable release ports are placed towards the front of the body where they won’t block the screen’s movement. There are also micro HDMI and USB-C ports. Image credit: Andy Westlake

Updated connectivity includes Bluetooth v5 and 5GHz Wi-Fi, which can be used to connect the camera wirelessly to either a smartphone, tablet or computer. It’s also possible to connect the camera to a mobile device via its USB-C port for a more stable connection, which in principle should allow a tablet to be used as an external monitor. Like many recent cameras, the EOS R6 Mark II can also be used as a 4K webcam for video calls, without any need to install additional software on your computer.

Externally, the EOS R6 Mark III is very much like its predecessor. This can only be a good thing, as the R6 handled exceptionally well. So you get the same triple-dial control, including Canon’s excellent ISO dial that can be used to shift the setting temporarily when in Auto ISO mode. There’s a conventional exposure mode dial, and the AF multi-controller has been subtly redesigned. In terms of build, you get the same magnesium alloy chassis and weather-sealed glass fibre-reinforced polycarbonate shell as the original EOS R6. 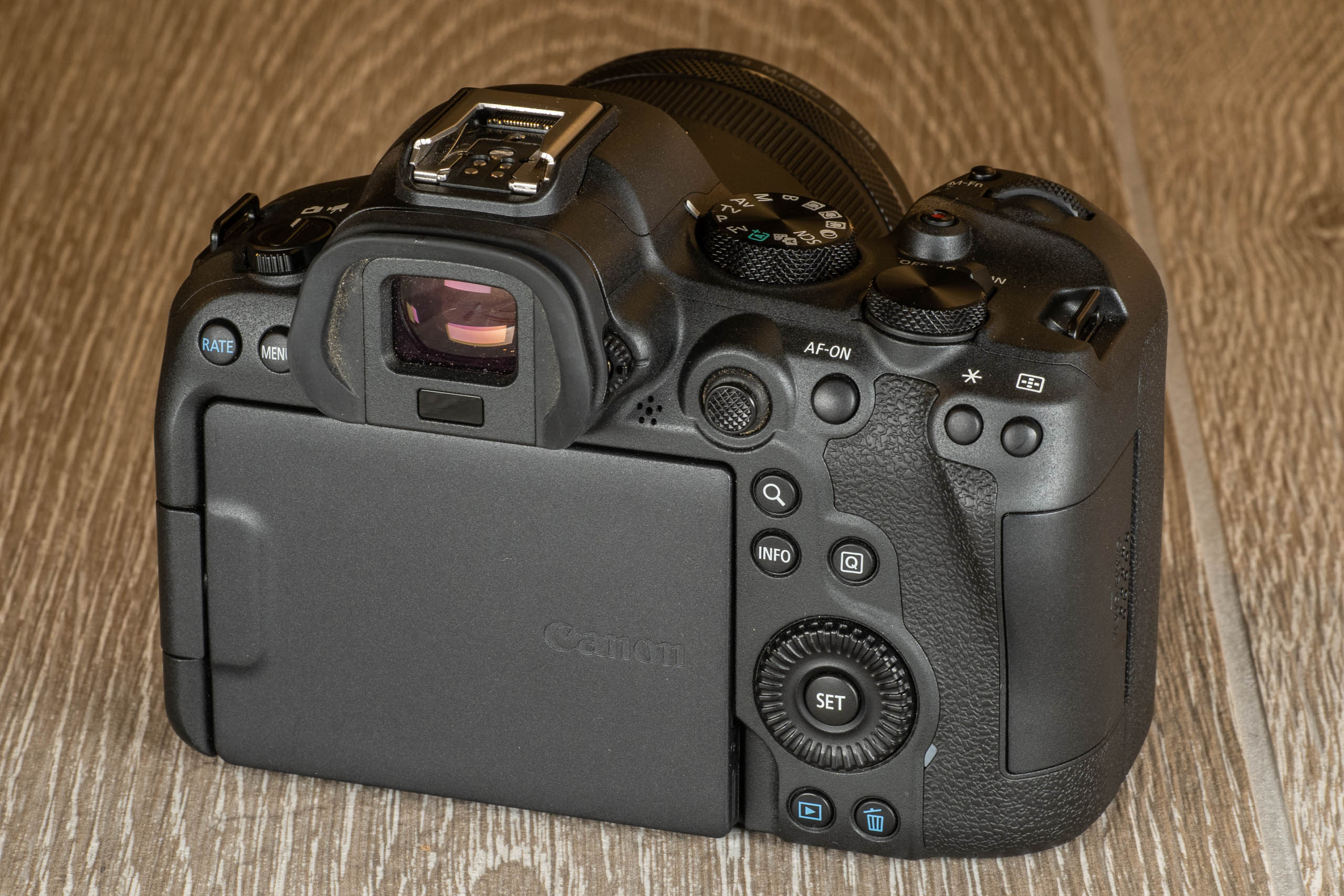 The EOS R6 Mark II has almost exactly the same control layout as its predecessor. Here you can see the screen folded in against the body for protection. Image credit: Andy Westlake

For composition and viewing your images, you get the same 3in, 1.62m-dot fully articulated touchscreen and 0.76x, 3.69m-dot EVF. The latter now benefits from the OVF View Assist mode that debuted on the EOS R3, giving a more SLR-like viewing experience.

There are a couple of notable design updates, though. The power switch has moved from the left across to the top right, where it’s slightly easier to reach, with its place taken by a photo/video mode switch. Eagle-eyed observers will also spot that the infrared receiver on the handgrip has gone, with wireless remote release now provided more effectively by Bluetooth and Wi-Fi.

I had the opportunity to try out the Canon EOS R6 Mark II prior to its release, including shooting a group of dancers in somewhat dimly lit conditions, where the face and eye detection performed impressively well. It feels like a very sensible evolution of the original, maintaining the same excellent handling and easy-to-use operation, but with a real boost to its speed and autofocus capabilities.

This all comes at a cost, of course, with the EOS R6 Mark II commanding a £380 price increase over its predecessor (body only). We will, of course, be bringing you a full review just as soon as we can. 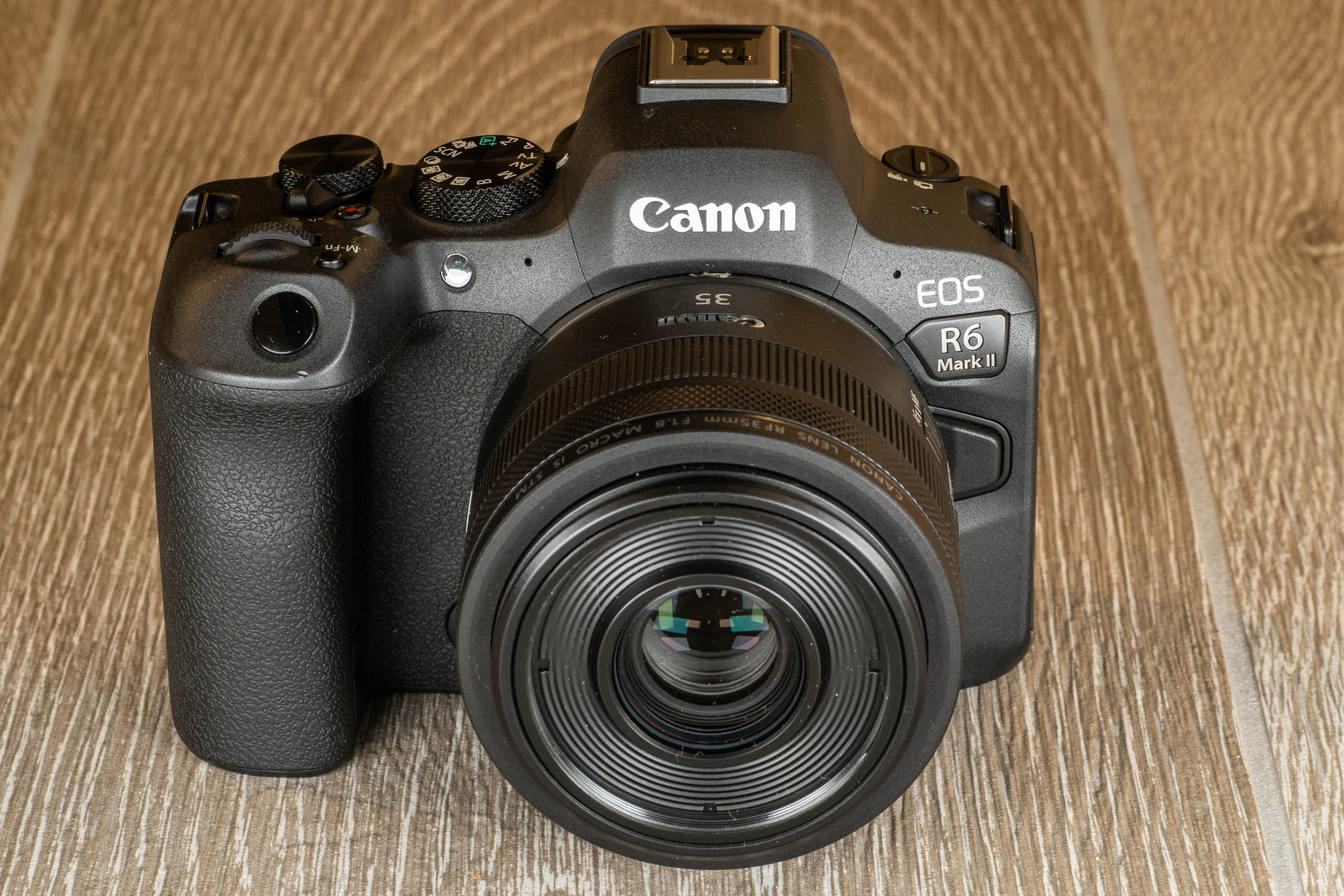