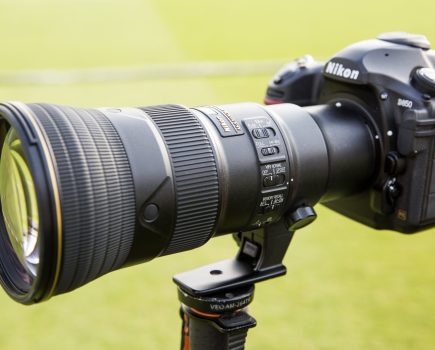 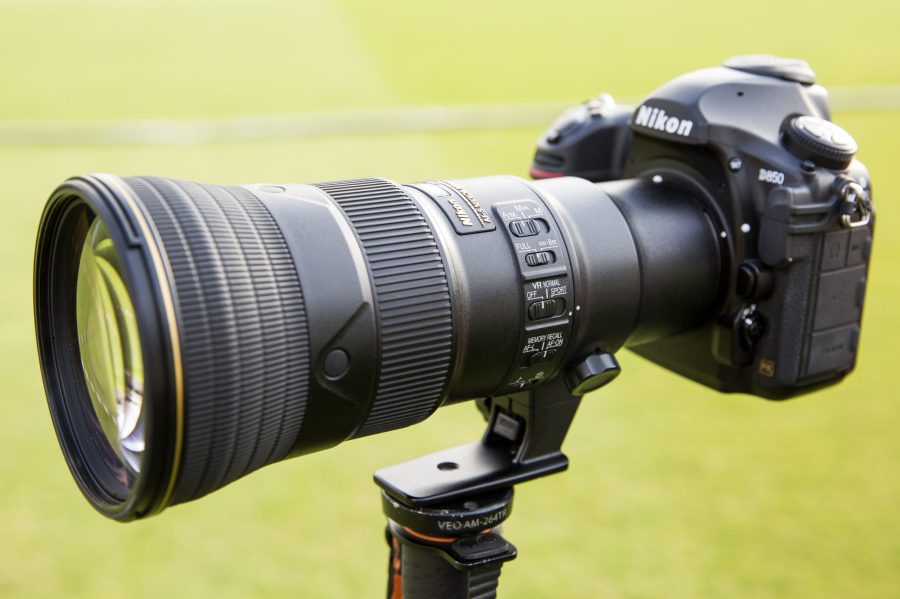 How time flies. By the time you read this a year will have passed since Nikon unveiled its Z-series cameras to the world. Such was the excitement surrounding Nikon’s entry into the full-frame mirrorless market, the release of the AF-S Nikkor 500mm f/5.6E PF ED VR that was announced at the same time went almost completely unnoticed. I still recall samples of the lens sitting lonely in the corner of a room as members of the photo press fought to get hands-on with the then-new Nikon Z 6 and Z 7. The lack of initial interest really wasn’t deserving of a lens with so much promise and potential.

Unlike Nikon’s colossal AF-S 500mm f/4E FL ED VR and AF-S 600mm f/4 E FL ED VR lenses that cost £9,969 and £11,869 respectively, the AF-S Nikkor 500mm f/5.6E PF ED VR is an ultra small, lightweight and considerably cheaper super-telephoto prime. The £3,699 price tag might put you off buying it, but compare it to other 500mm primes and consider that it can be hired from £90 per day/weekend from lens hire companies such as hireacamera.com and you’ll soon realise there’s no other lens quite like it. Currently the world’s lightest 500mm full-frame telephoto prime, it has found its way onto many serious sports and wildlife photographer’s wish lists. 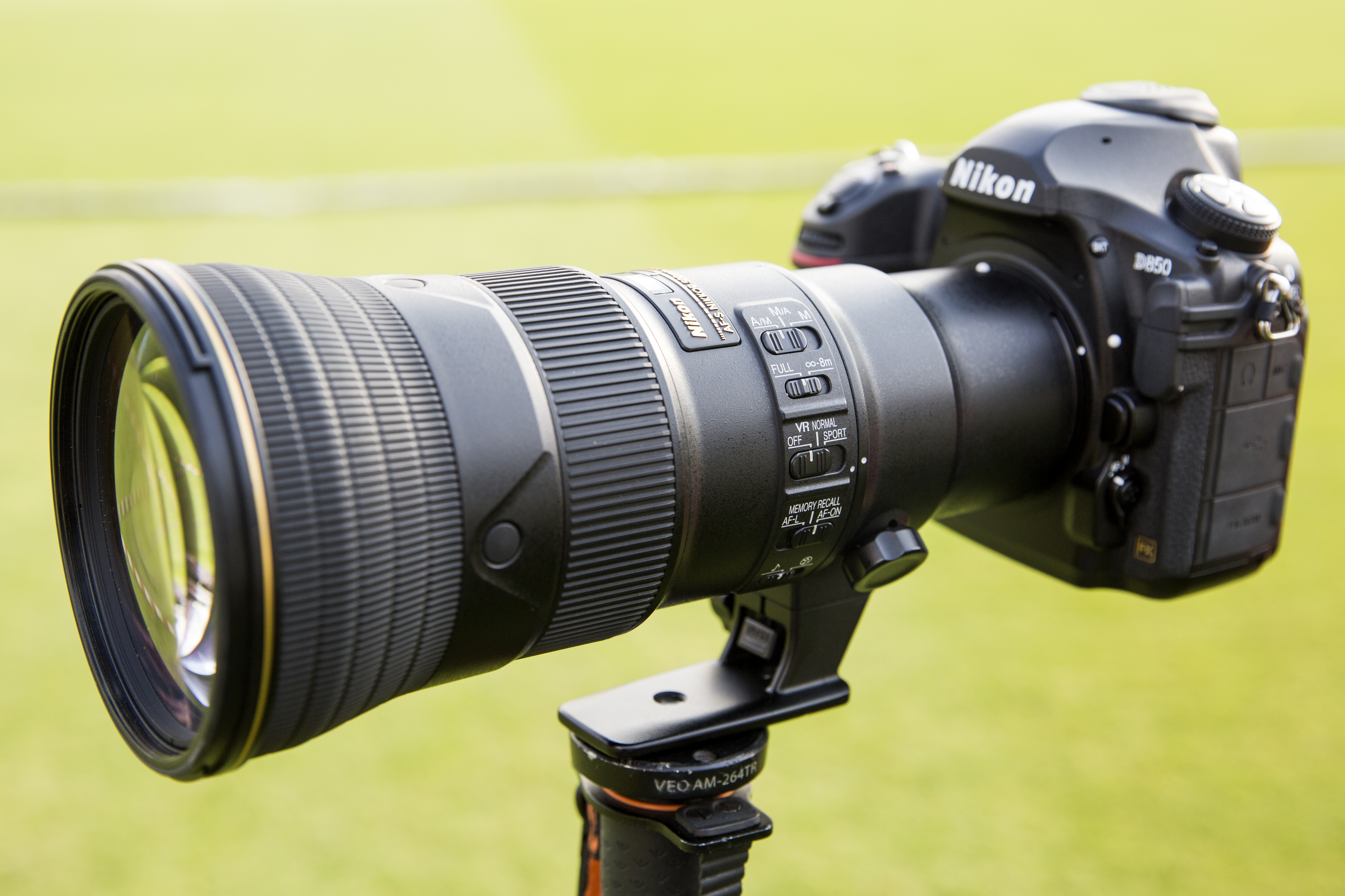 With my press accreditation confirmed for this year’s T20 cricket matches at Lords, it seemed like a perfect opportunity to call the lens in, give it a test and get a second opinion from Matt Bright – a professional sports photographer and long-serving Nikon user.

My concern of having to lug the lens across the city by its tripod collar or in a Peli case was quickly put to rest when I discovered it fitted comfortably inside my small messenger bag. Measuring 237mm in length and weighing just 1,460g, it takes up less space and is lighter than most 150-600mm zooms. 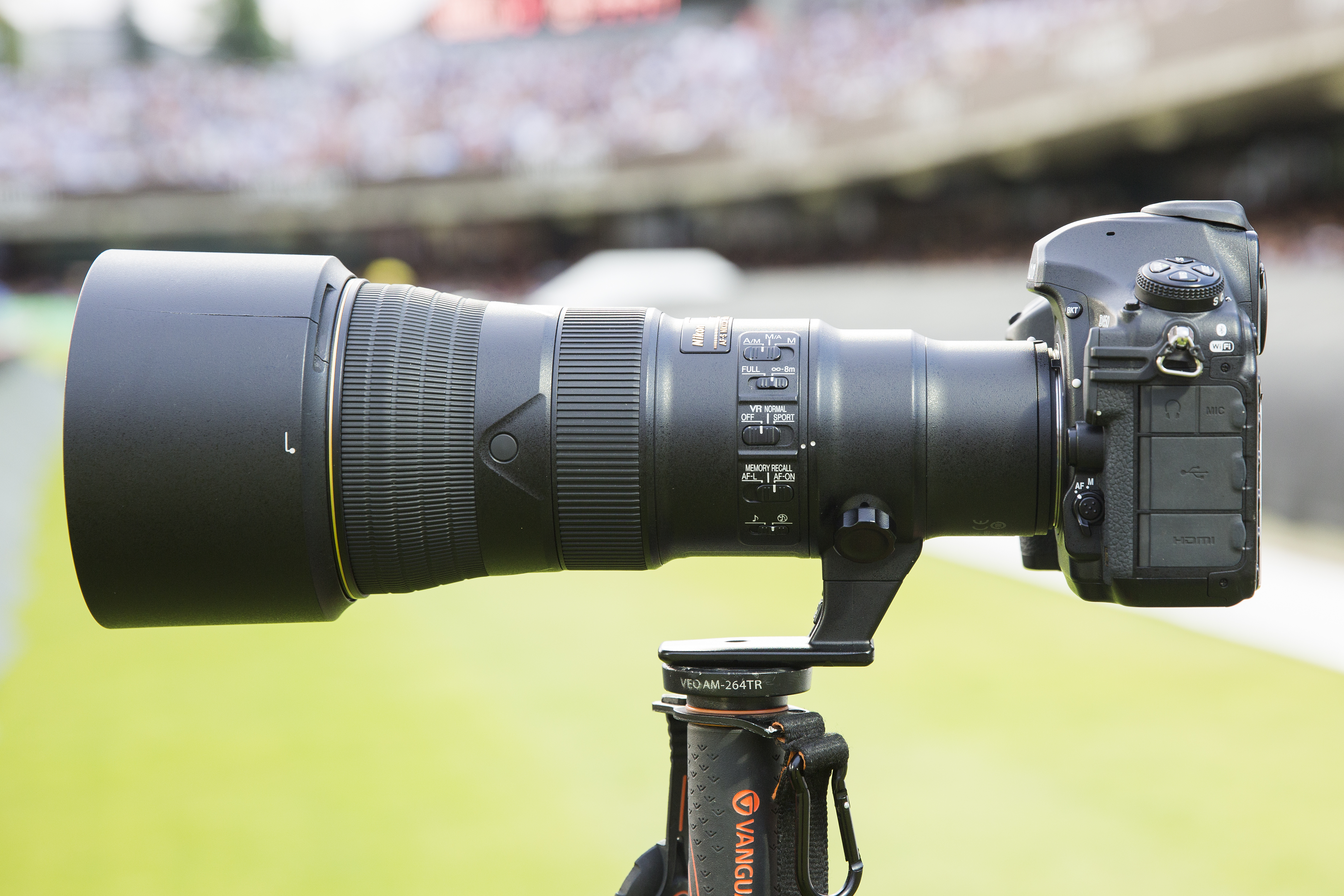 Its size and portability is all made possible thanks to the inclusion of a Nikon developed Phase Fresnel (PF) element, which made its debut in Nikon’s AF-S 300mm f/4E PF ED VR back in 2015. This special element is designed to effectively compensate for chromatic aberration utilising the photo diffraction phenomenon. Compared to other lenses that employ an optical system using the photorefractive phenomenon, it allows a remarkably compact and lightweight lens to be made with fewer elements. 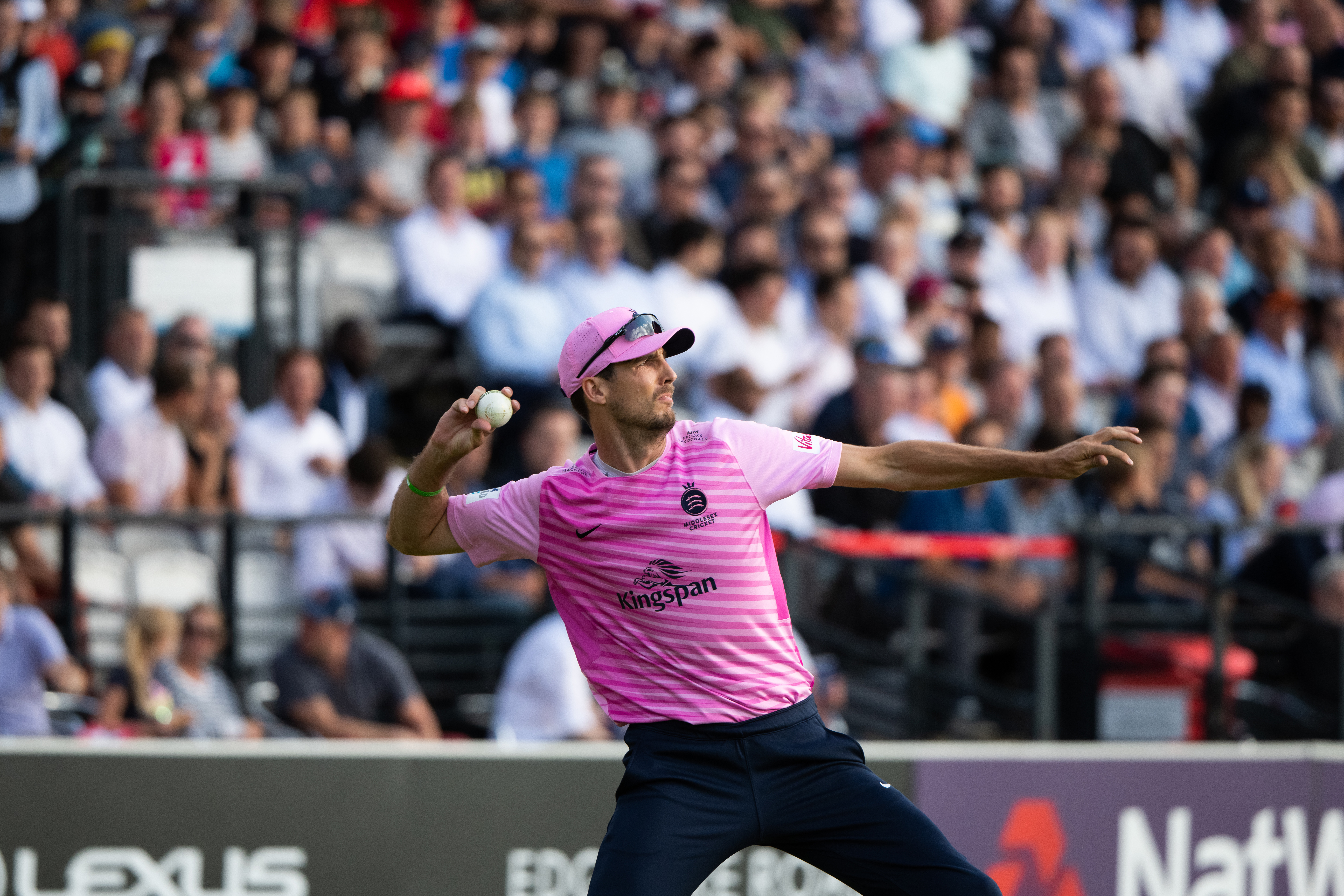 Taking up my shooting position on the boundary edge and coupling the lens to my Nikon D850 immediately highlighted a few things. From the outset I noticed it’s very comfortable to shoot with handheld. This is great news for sports, action and wildlife photographers who like to work freely without feeling forced to support the lens on a monopod. My first few frames also highlighted how well the 4-stop vibration reduction system works. Out of curiosity I switched it off and on a few times while handholding the lens with the viewfinder raised to my eye. The difference when it’s active is as clear as day. 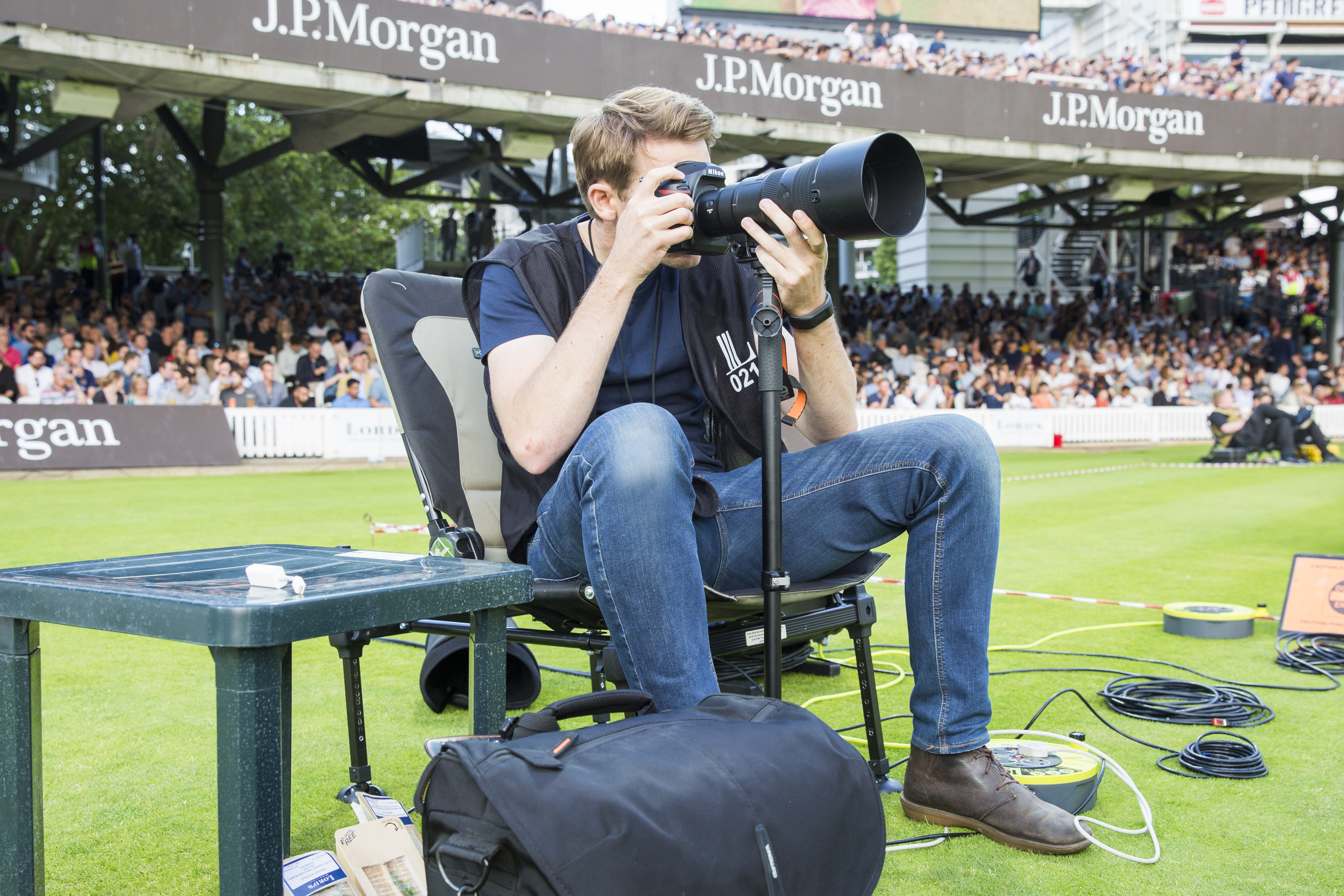 Complementing the Normal VR setting, which is intended for stationary subjects, is a Sport setting that’s designed to be most effective for subjects that move erratically or unpredictably. I left it set to the latter and a quick referral to the manual confirmed both VR settings can be used when a camera is used in combination with a monopod with no ill effects.

A stop difference between an f/4 and f/5.6 telephoto prime may not sound like much, but when natural light starts to fade and you’re challenged by low light, just as I was at Lord’s, it forces you to use higher ISOs to compensate for the slower aperture. Careful not to fall below 1/1000sec so I could freeze the action and capture a crisp white ball, I started the evening shooting at 1/2000sec at f/5.6, ISO 400, which within the space of three hours changed to 1/800sec at f/5.6, ISO 2000. 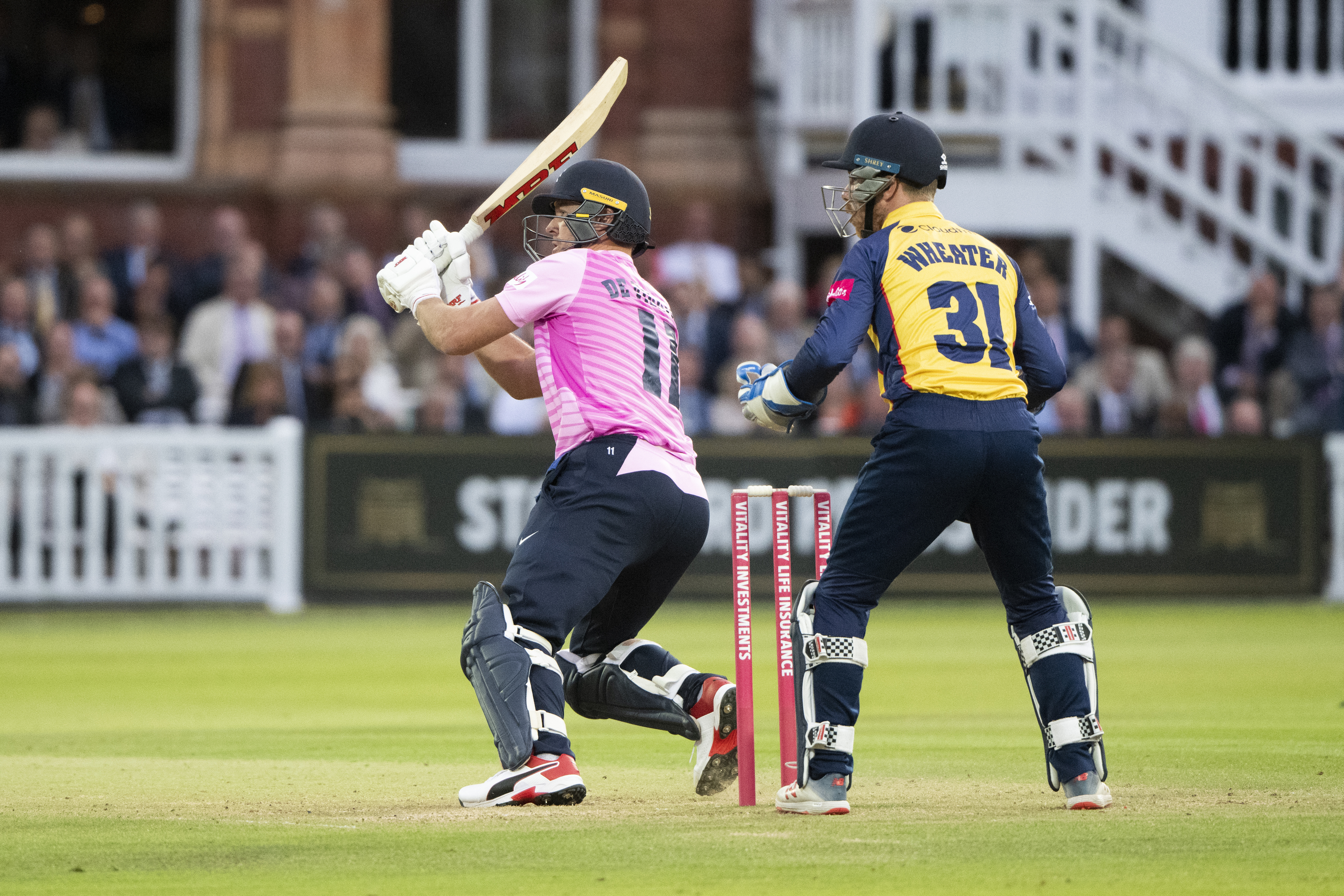 Swapping lenses with Matt to get his thoughts on the lens confirmed what I initially thought. It’s best suited to situations where there’s plenty of ambient light. Thanks to the floodlights and superb performance at high ISO on the D850, I was managing to get pleasing results under testing conditions. As Matt pointed out though, using the lens in dark winter months to shoot football or rugby, or at a stadium where the floodlights aren’t as bright would ask much more of the camera’s sensor at high ISO and be a different test entirely. 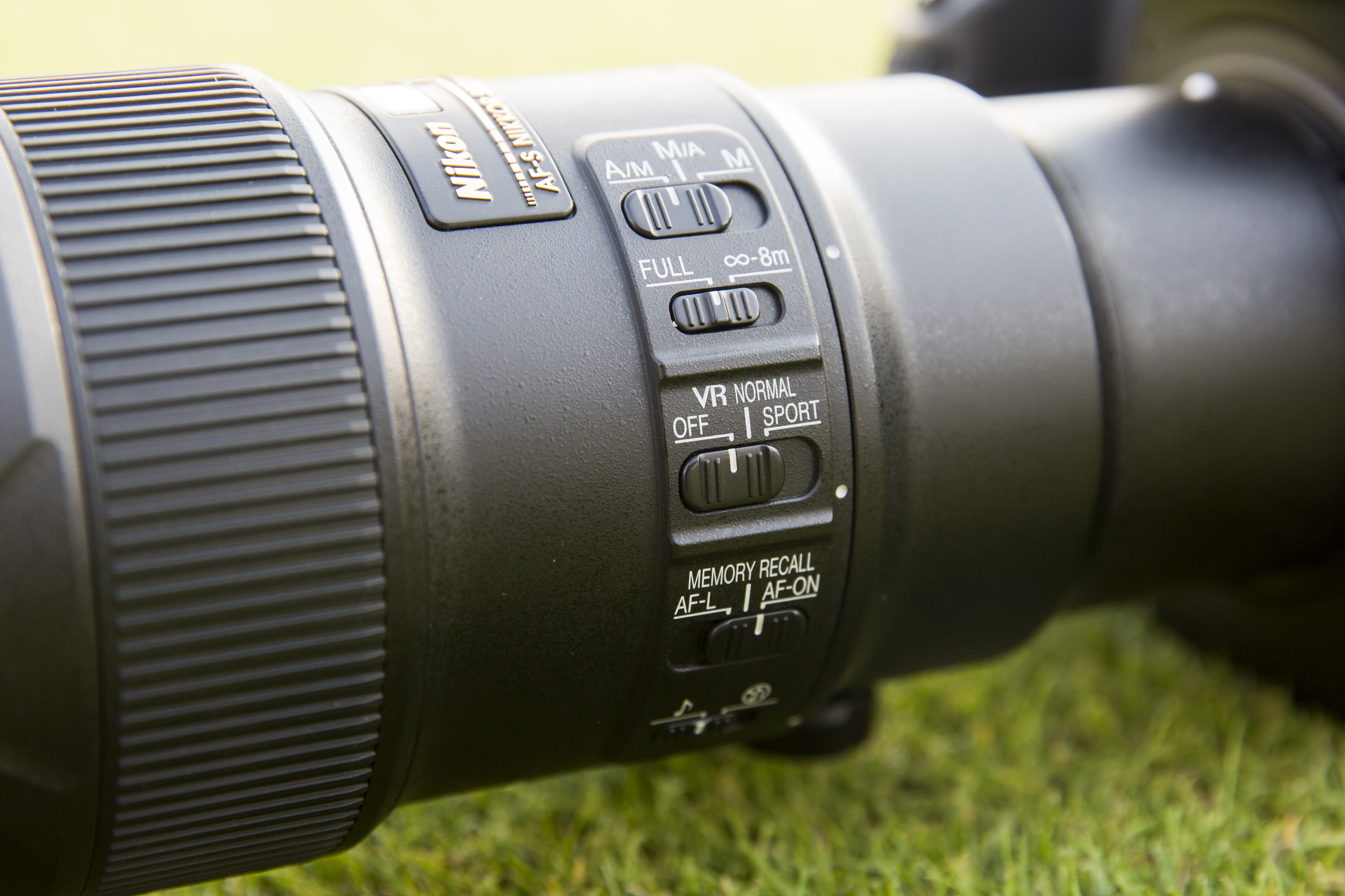 There are five switches in total on the barrel of the Nikon AF-S NIKKOR 500mm f/5.6E PF ED VR

Another thing that blew me away was the blisteringly fast focusing performance. A press of the one of the four function buttons with the focus function selector set to AF-ON finds focus immediately. Autofocus speed on moving subjects with the AF mode set to continuous is incredibly brisk. It held focus well during a ten-frame burst and there was no obvious difference in focus speed between it and Matt’s AF-S 600mm f/4 E FL ED VR. 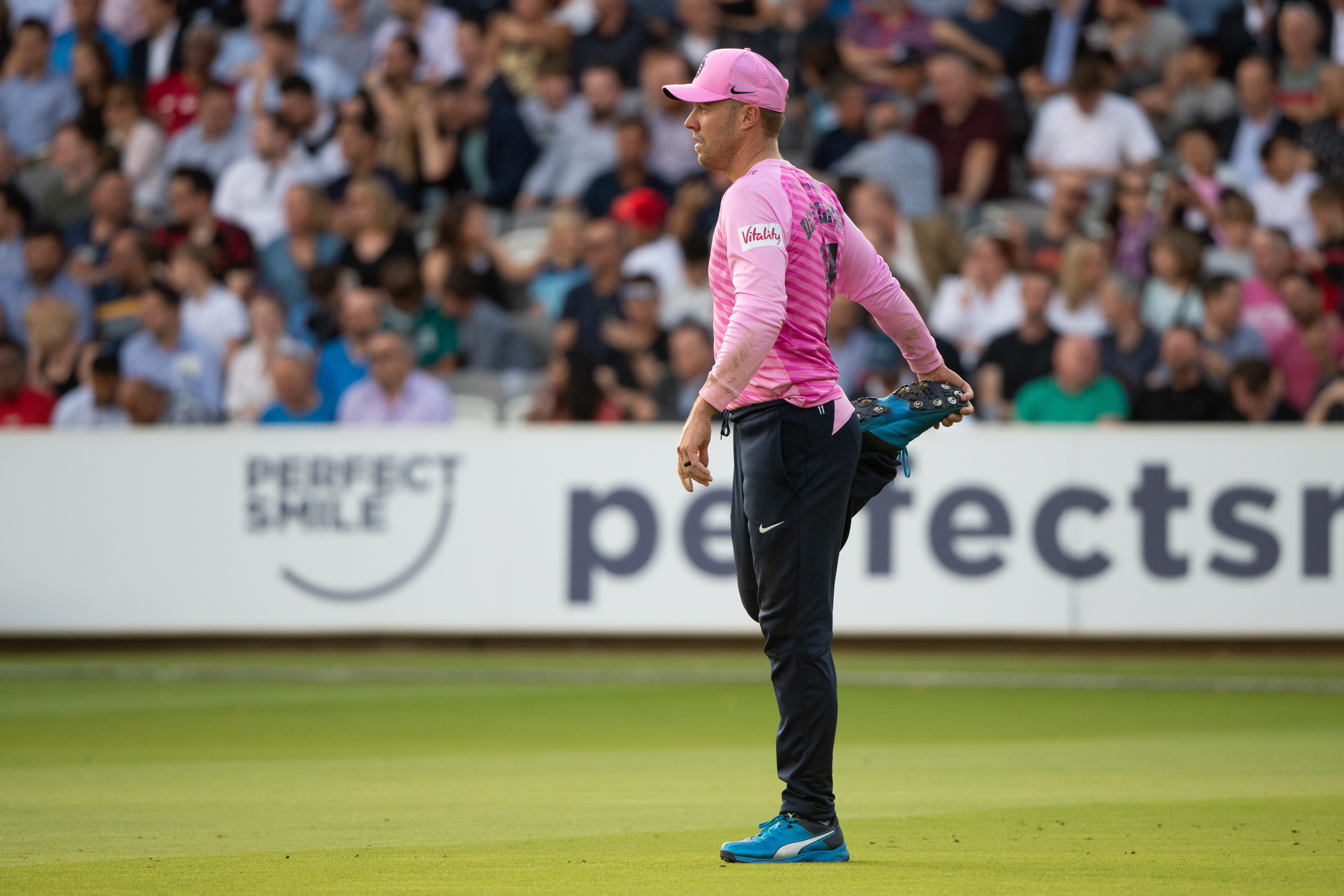 Using the memory recall function requires the beep on/off switch to be enabled and the focus mode switch to be set to its central memory recall setting. Saving a focus distance is as simple as pressing the memory set button, however its positioning could be better on the barrel by allowing it to be pressed using your left hand supporting the lens. When a beep sounds it means the focus distance has been saved. Having the option to set the same focus distance as a previous shot from a press of a button, regardless the position of the focus mode switch, is great to have for sports and wildlife photography where there’s a chance a subject might return to the same spot time and time again. 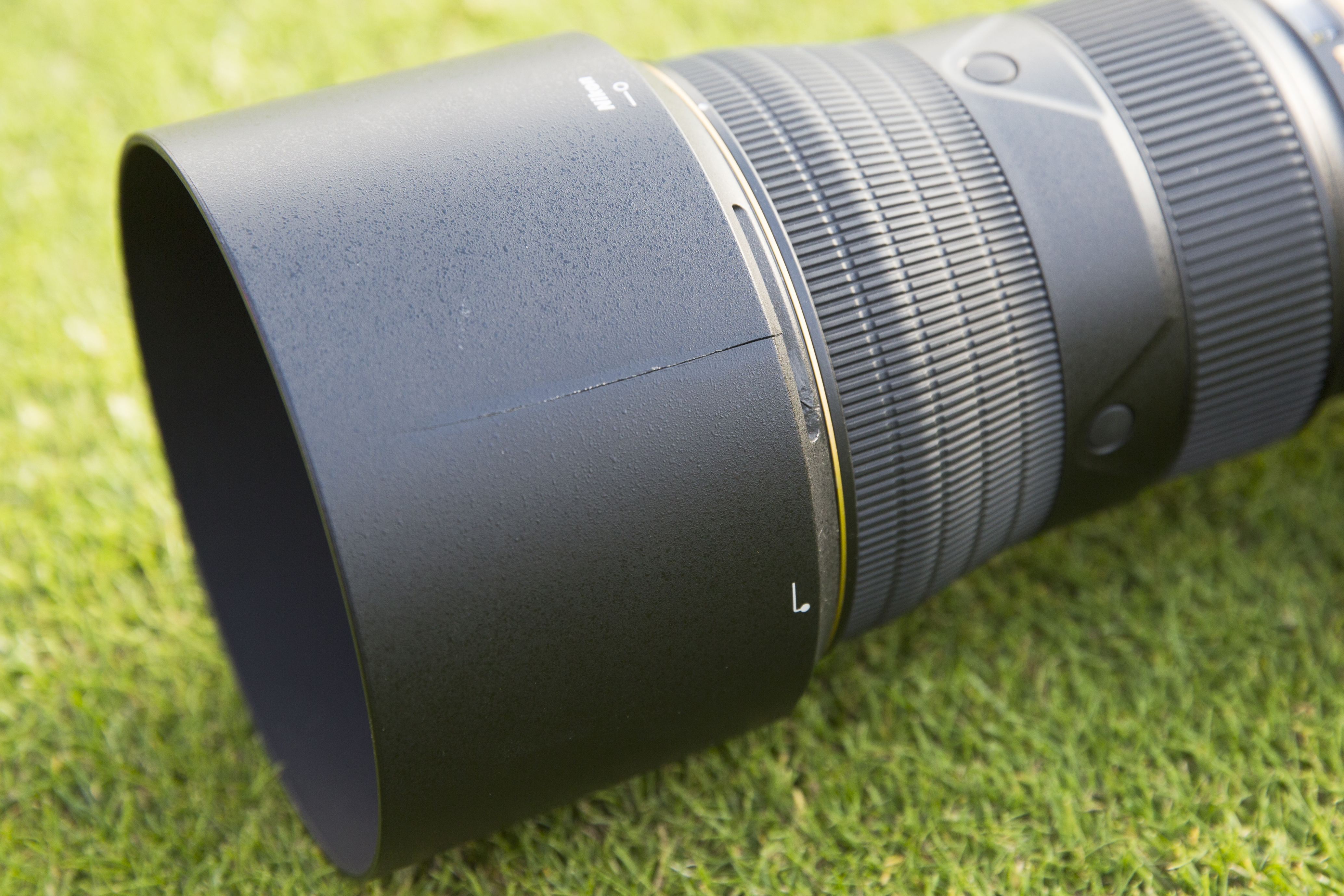 The plastic lens hood was cracked on our review sample when it arrived.

Resting the lens nose down on the hood between spells of shooting did highlight one flaw in the design. Unlike Nikon’s 500mm f/4 and 600mm f/4 primes that are supplied with carbon fibre lens hoods, the plastic one you get is more vulnerable to damage. One area in particular is prone to getting cracked, just as it was on my sample when it arrived. I’d like to see Nikon design a carbon fibre hood as an optional accessory for the lens.

There’s only so much you can tell by glancing at a camera’s screen when it comes to analysing optical quality, so between innings I rushed to the media centre to download my shots and take a closer look. The maximum aperture of f/5.6 might not be fast, but the fall-off in focus between players and spectators behind them at such a long focal length creates a highly satisfying depth to images that shouts that they were taken with a specialist lens. 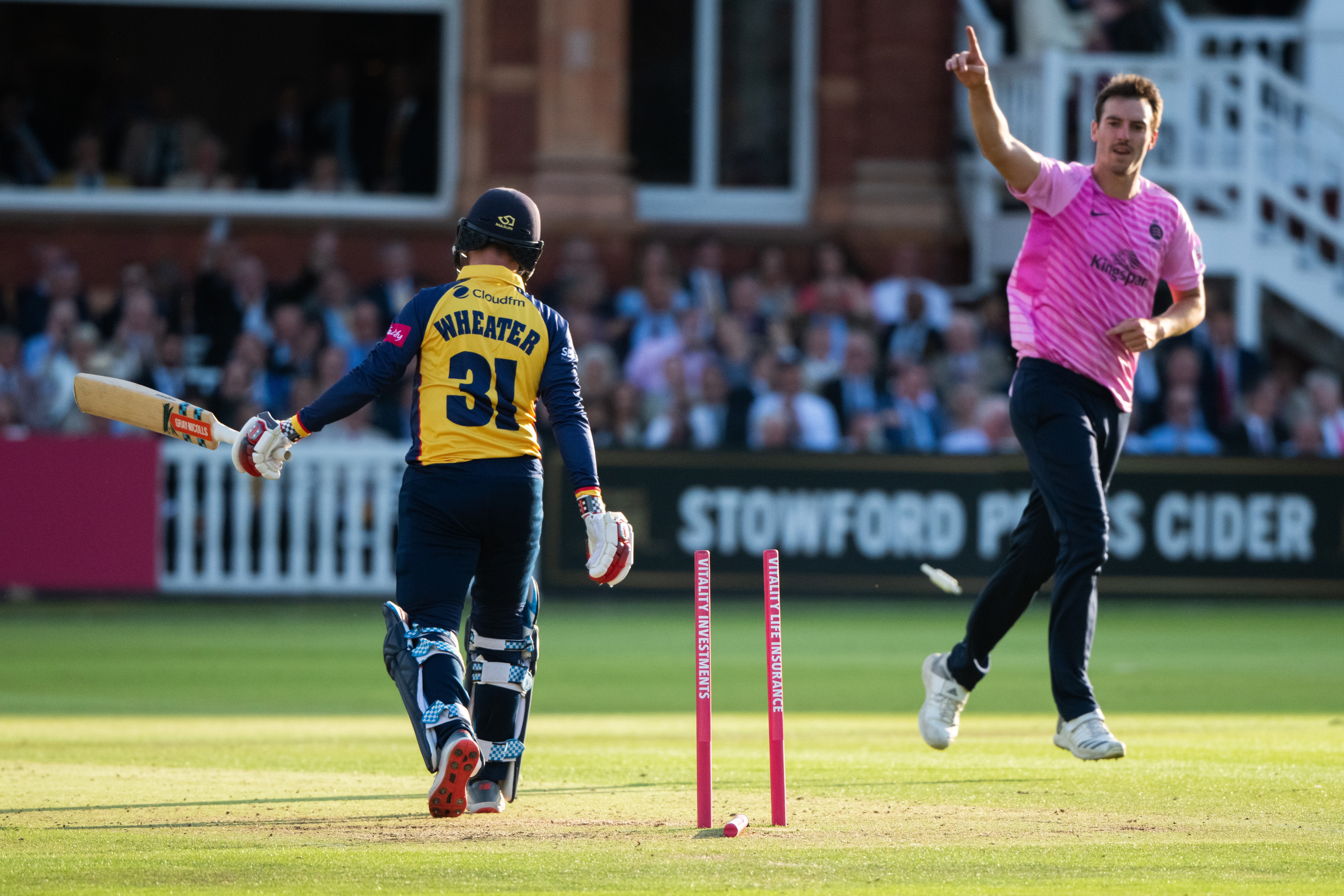 One of the known issues of using a Phase Fresnel (PF) element in the construction is that it can be susceptible to producing colourful ring-shaped flare. The good news is that I noticed no such issue in any of my shots during testing and there’s always PF Flare control to fall back on in Nikon’s Capture NX-D software should it be needed. 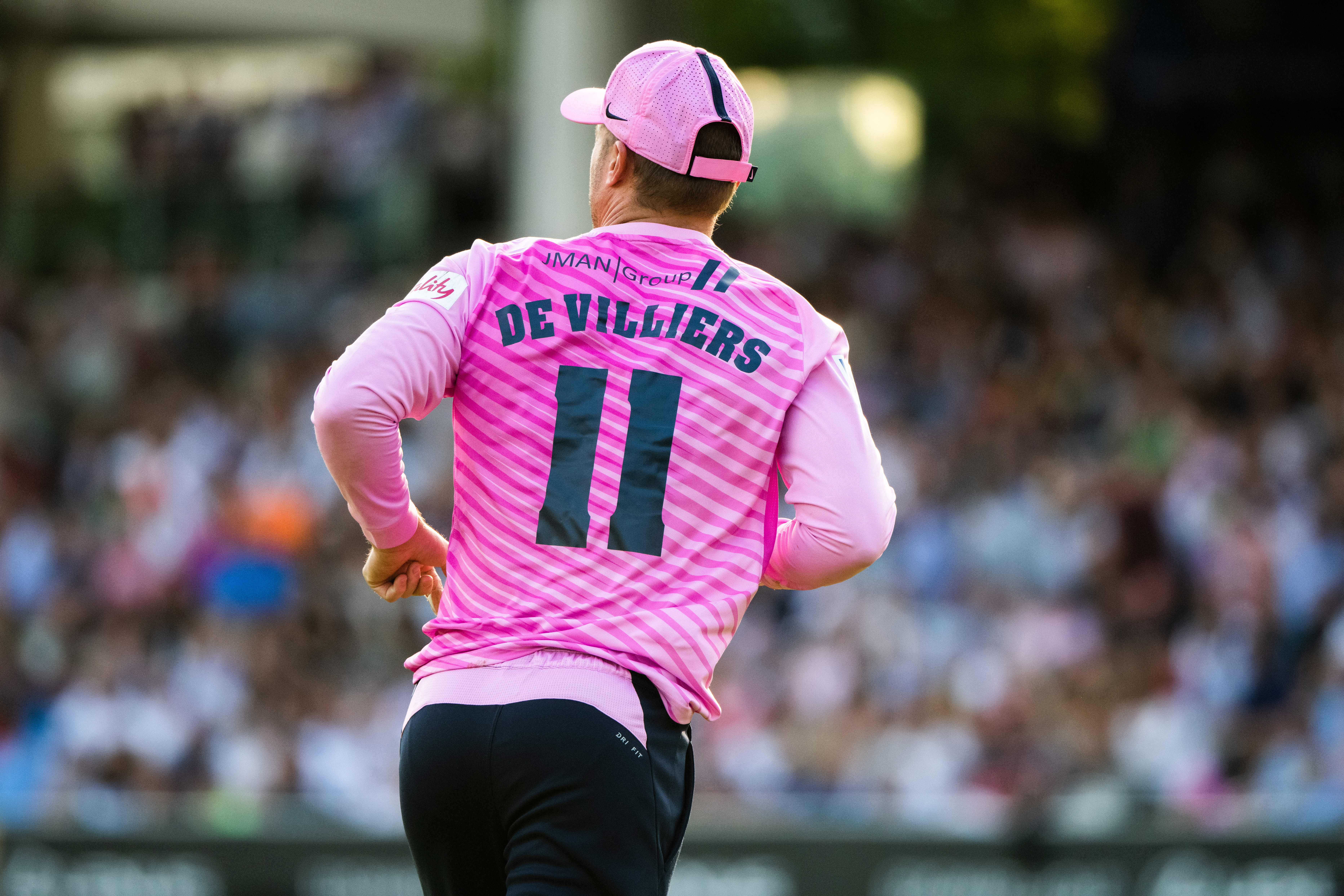 The lens controls chromatic aberrations exceptionally well and although it does show signs of vignetting at f/5.6, it’s not overly offensive and is quick to disappear as you stop down. Sharpness is the lens’s key strength. It’s insanely sharp in the centre at f/5.6. Edge sharpness improves by stopping down to around f/8, with diffraction starting to take the edge off sharpness at f/16 and beyond. You’d expect an extremely impressive image quality performance for the price and that’s precisely what you get. 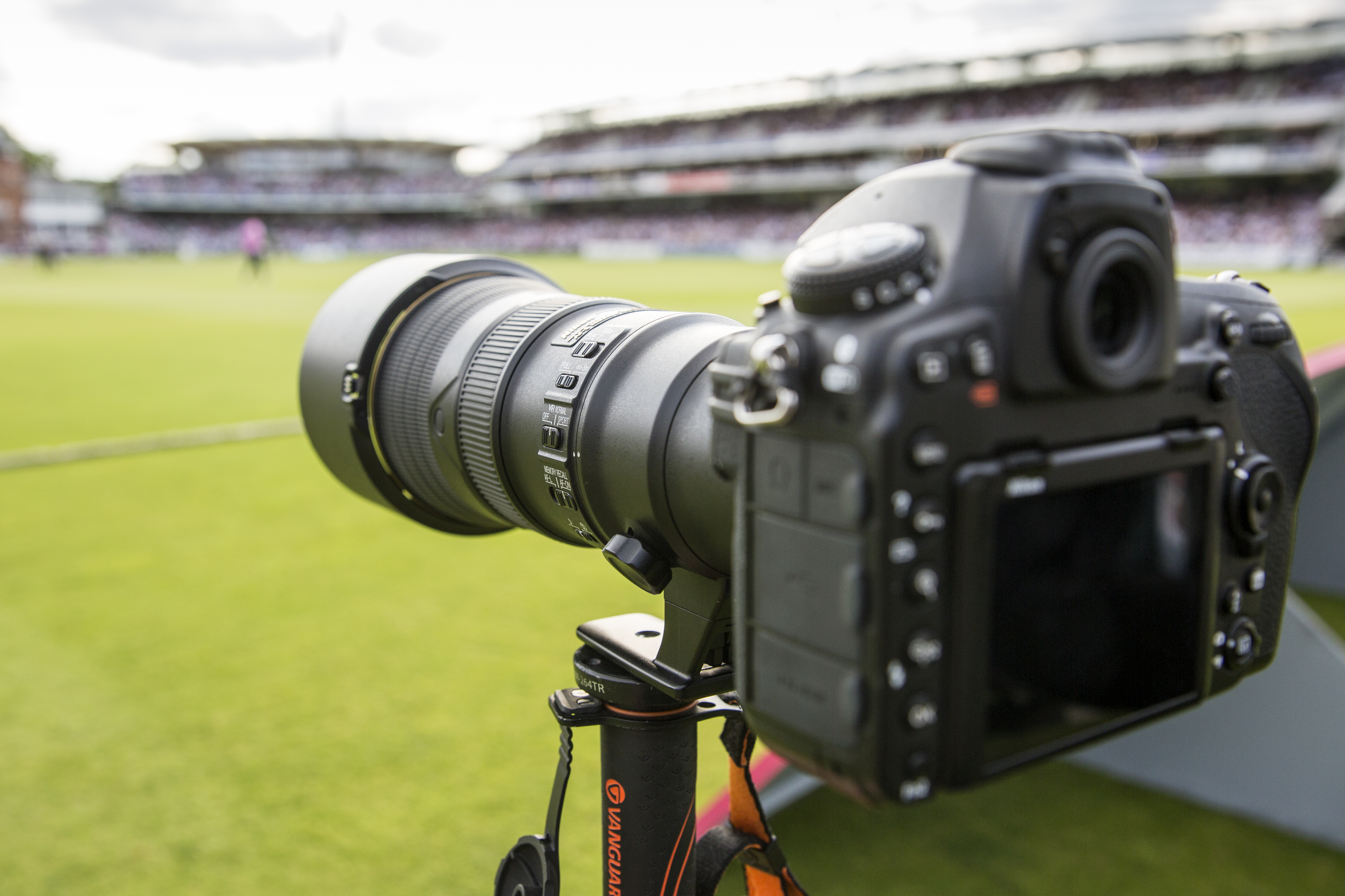 The Nikon D850 offers f/8 support, meaning the camera will autofocus when the Nikon TC-14E III teleconverter is coupled between body and lens

The headline to this review sums up this lens perfectly; it’s a sublime super telephoto prime that delivers the level of image quality and performance we associate with Nikon’s pro-spec 500mm f/4 and 600mm f/4 lenses at significantly lower cost. Pros who regularly shoot in low light and demand a faster aperture are likely to sway towards an f/4 prime to gain a speed advantage, but for other serious sports and wildlife shooters who know they’re going to be working with plenty of light, want to free up some valuable luggage space and like the sound of being able to comfortably shoot handheld with a 500mm prime all day, it’s a seriously tempting alternative. 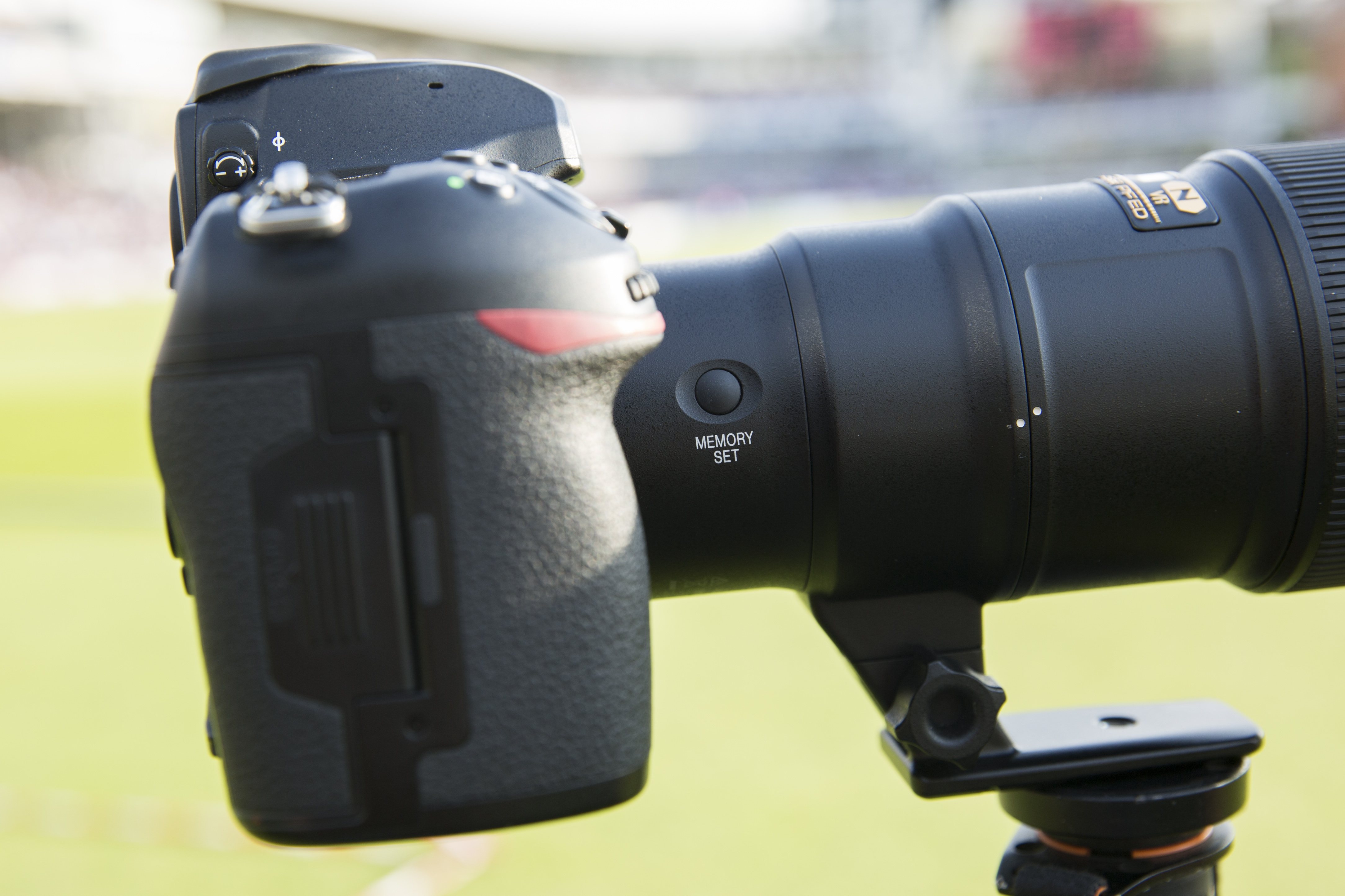 If I were a Nikon user planning to go on safari, I’d put my name down to hire this lens in an instant. It would be a dream lens to capture once in a lifetime wildlife images with. You won’t get any change from spending around £150 a week or £250 for two weeks’ hire, but I don’t think this is unreasonable given how much you’d need to pay to buy it outright. There will always be the argument that a long telephoto zoom lens covering a focal lengh of 100-400mm or 60-600mm is more versatile and affordable, however if you know you shoot most of your shots around the 500mm mark and want the best you can get at this focal length, you’ll struggle to find a better lens for the money. 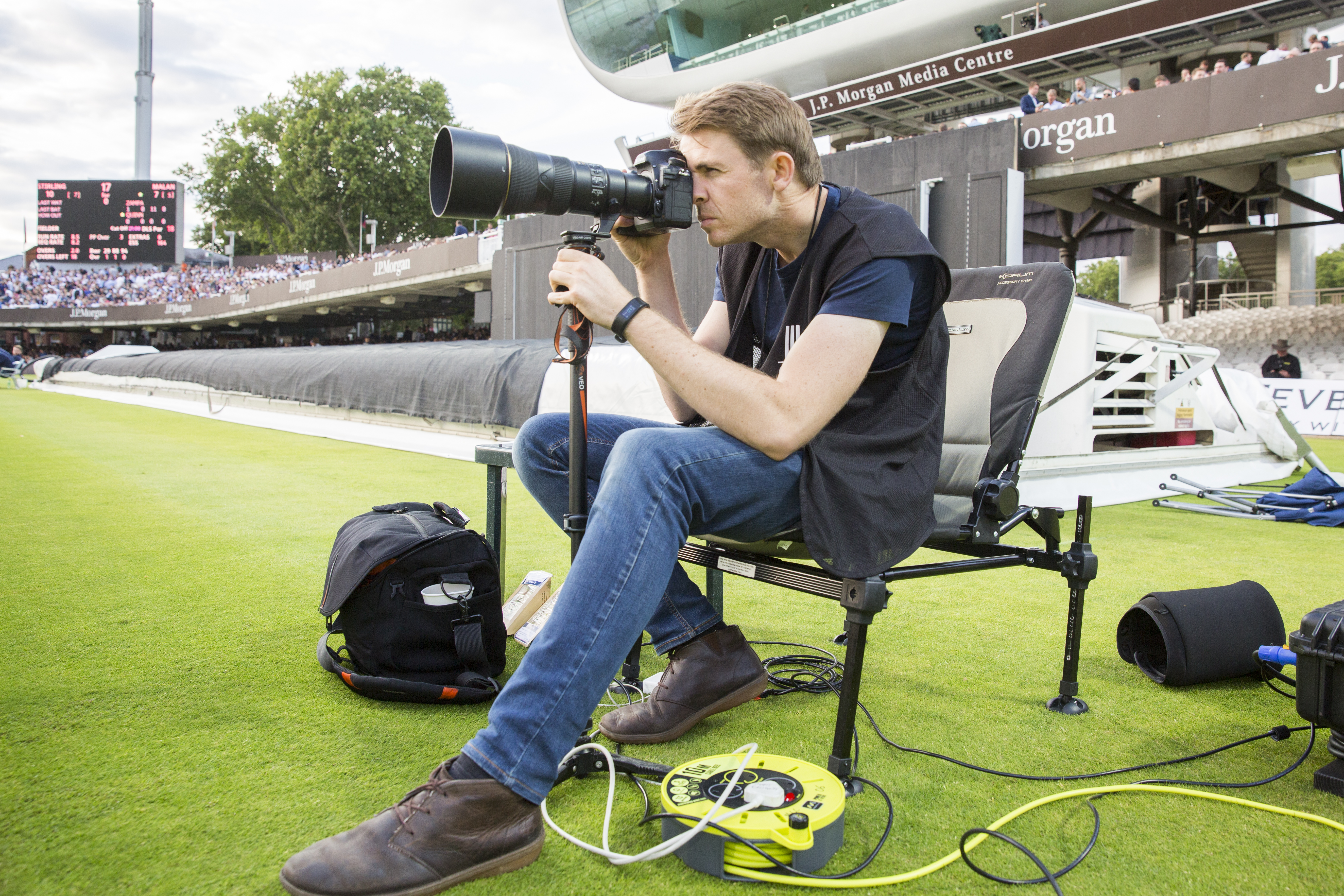 Ultimately, the way Nikon has managed to blend such fine optics inside such a well-built lens, while making it incredibly fast to focus and extremely light and portable is a great achievement. The lack of a strong carbon fibre hood is the only area where it comes under any form of criticism.

So now that Nikon has both a 300mm f/4 and 500mm f/5.6 compact telephoto prime in its lineup, what can we expect next? I know of quite a few Nikon users who would love to see the manufacturer develop a 400mm f/4 with a Phase Fresnel (PF) element to slot in between the lens reviewed here and the AF-S NIKKOR 300mm f/4E PF ED VR. Whether this is in the pipeline nobody knows, however with next year’s Olympic Games fast approaching, I wouldn’t be surprised if it’s on the cards.

Amateur Photographer would like to thank Lords and the MCC for accommodating our visit.

To register your interest in the Wisden-MCC Cricket Photograph competition send an email to poty@mcc.org.uk or visit www.lords.org. A link to the entry form will be sent when the competition opens.