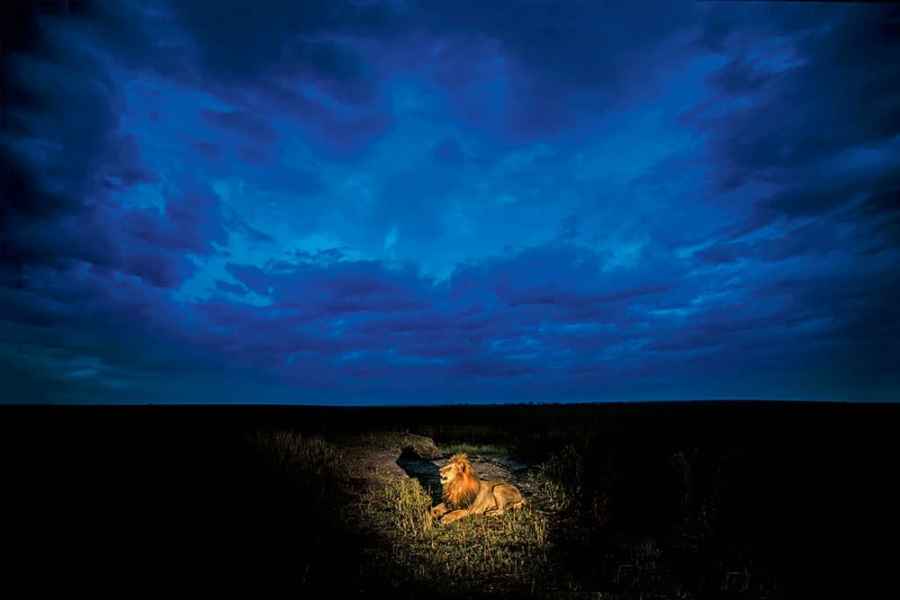 Professional photographer, Ian Plant travels the globe seeking out amazing places and subjects in his quest to capture the beauty of our world with his camera, with a particular interest in low-light wildlife photography.

‘Always shoot with the sun at your back’ is a mantra popular with many wildlife photographers. Not me. While front lighting can be attractive and is easy to work with, I prefer to photograph my wildlife subjects at the very edge of light, pushing the limits of my equipment and my creativity.

Extreme and low-light wildlife photography presents many unique challenges, but the rewards for your efforts are moody and expressive images that really stand out from the crowd. 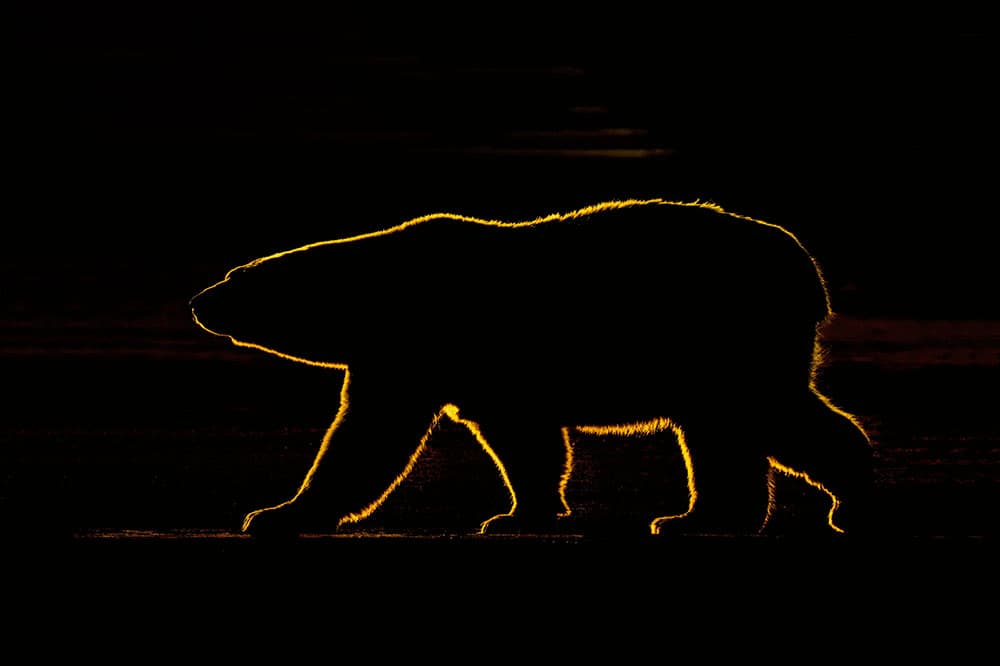 I have been a professional photographer for 12+ years, and along with landscape and travel photography, wildlife is one of my specialities. I love it because it adds an expressional dimension that is often missing when shooting landscapes; with wildlife, your subject’s pose, behaviour and expressions can enhance the overall visual design of your photographs, and connect emotionally with viewers in a way that is completely different from other types of photography.

With all of my imagery, however, I look to move beyond the literal, getting creative with composition, light, and exposure, to transform my subjects into something artistic and unexpected. When shooting wildlife, I work with extremes of light to help me create images that bring my vision to life.

When working in strong light, I shoot at extreme angles for dramatic effect. For this shot of a polar bear (see above), I waited until the setting sun was low enough for the light to be warm and colourful, but still high enough for the light to be much brighter than the shadows, resulting in a significant amount of contrast. I aimed my camera towards the light, creating strong backlighting. I intentionally underexposed the image to show the highlights but allowed everything else to fall into deep shadow, revealing only the colourful rim lighting around the edge of the animal. The outline is instantly recognisable. 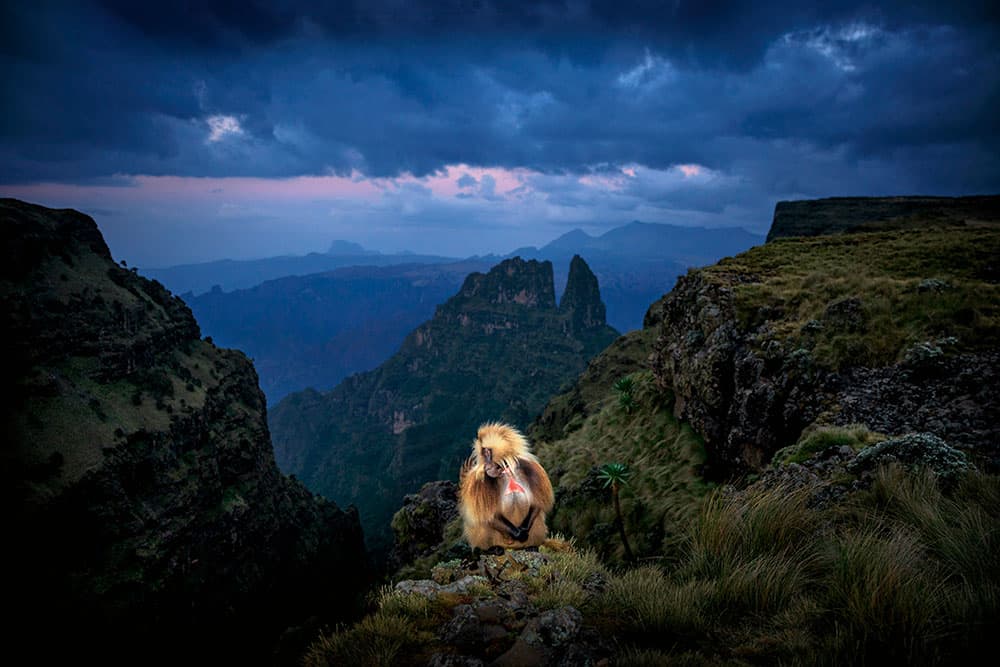 I love working in low light as well. I recently went on an extended backcountry trip to the Simien Mountains of Ethiopia, home to the beautiful gelada monkeys. These grass-eating monkeys have thick golden manes and distinctive red chest markings, making them ideal wildlife subjects.

One evening, a large troop of geladas came down to a dramatic wilderness gorge, getting ready to climb down the cliffs to their night-time roost. I took many pictures of cooperative geladas poised on the edge of the cliff overlooking the gorge, using fill flash at low power (-2 or -3 flash compensation) to gently illuminate the animals against the darkening landscape under a dramatic twilight sky.

I have found that the combination of creative exposure and supplemental light can yield moody and expressive wildlife pictures. When working with flash, I often use a number of accessories to avoid an obviously ‘flashed’ look: a flash bracket allows me to angle the light, for example, and attachments such as a flash grid or snoot allow me to narrow the flash beam so that I can selectively illuminate my subject. It’s always worth experimenting.

One evening, while photographing lions in Kenya, I found a male lion resting under stormy skies. I chose a dark exposure (-3 exposure compensation) to capture the gloominess of the twilight sky, while allowing the landscape to fall into shadow.

I used flash to selectively illuminate the lion in the grass. When a gap with a provocative shape appeared in the clouds above the lion, the composition finally came together. I was close enough to the lion that I could use a wide-angle lens and capture the entire scene. 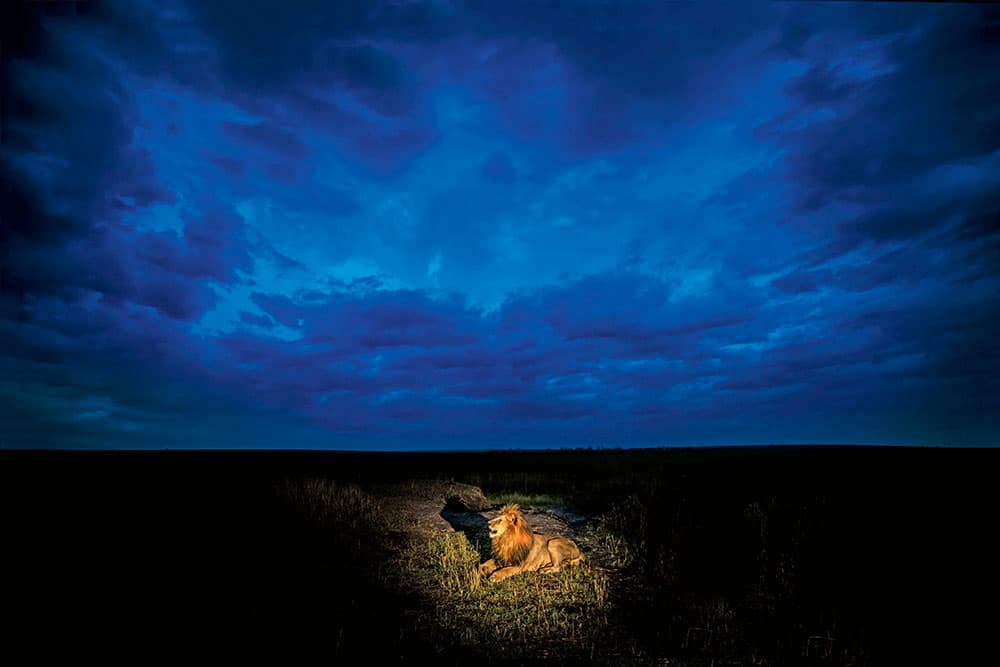 One of my favourite wildlife photo destinations is the rainforest of Sumatra in Indonesia. Not much light penetrates below the canopy, making wildlife photography in the forest interior difficult.

I had a lucky close encounter with a mother orangutan and her baby as they swung by me on their way through the forest, so I reached for my fisheye lens to add some creative curviness to the photo. I underexposed the background to emphasise the gloomy jungle environs and to minimise visual distraction caused by bright highlights where the sky was showing. I used my flash at low power to selectively illuminate the orangutans, bringing out the brilliant orange colour of their hair, making them stand out from the dark background. 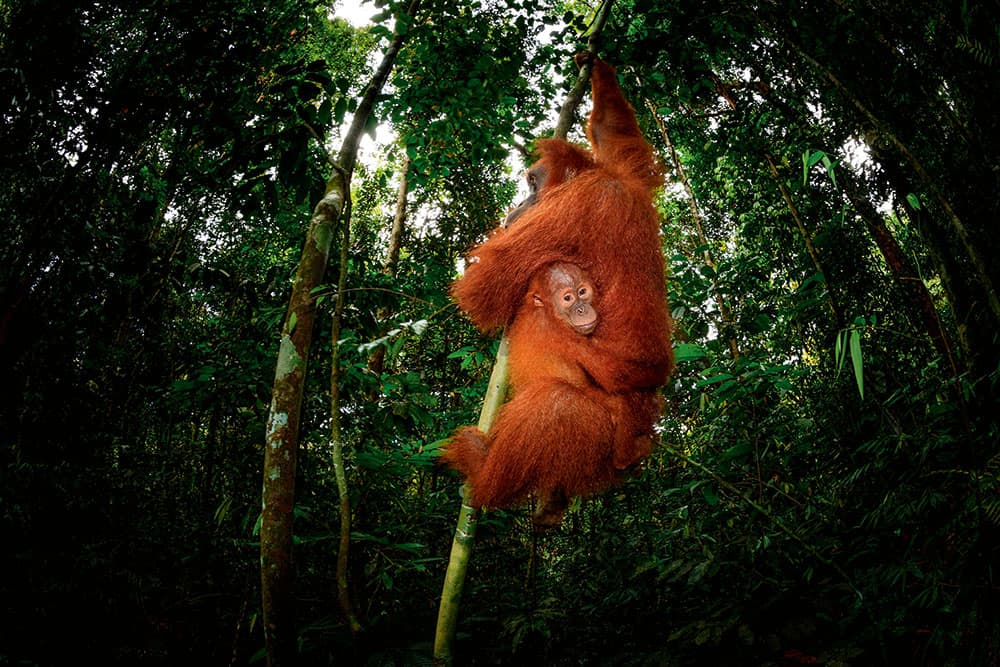 For the image of elephants crossing in front of a water hole at sunset, I chose a dark exposure, obscuring the elephants and focusing the viewer’s attention on the sunset sky and reflections. Angle is very important when photographing reflections; here, my chosen angle of view created some ‘cognitive dissonance’; the landscape and its reflection don’t seem to match, as the elephants responsible for the reflection are deep in shadow. This is a good example of how a photographer can use composition and exposure to ‘alter’ the reality of a scene, creating a more interesting presentation for the viewer. 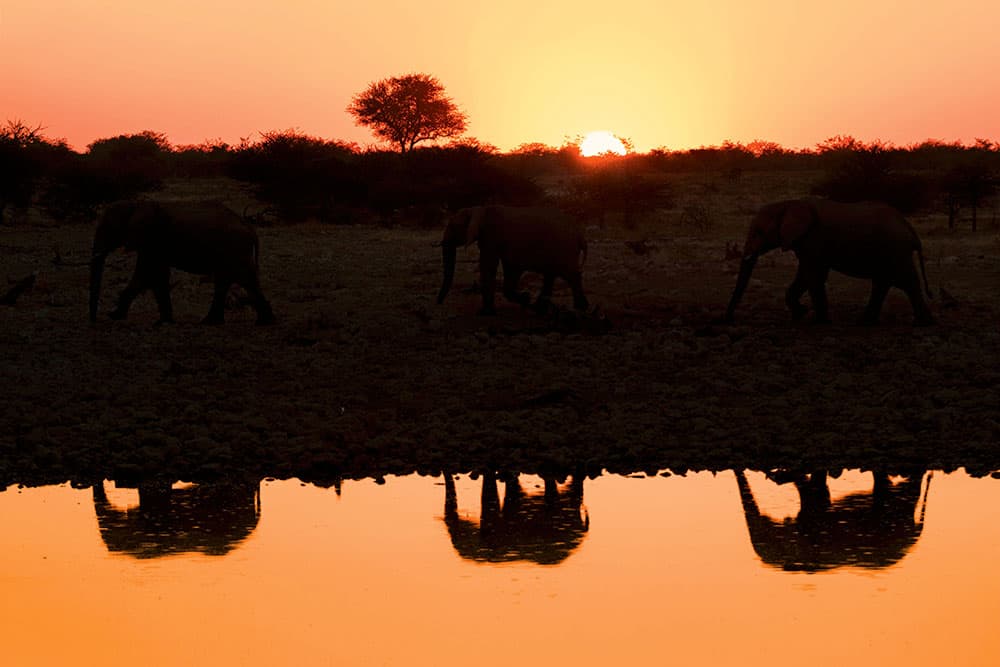 Elephants, Etosha National Park, Namibia. Photographers can use composition and exposure to ‘alter’ the reality of a scene. Here Ian ensured that the elephants were in shadow so only their reflection appeared. Canon EOS 70D, 70-200mm, 1/320sec at f/3.5, ISO 100. Credit: Ian Plant

Use a wide-angle lens

King penguins in the Falkland Islands are very tolerant of humans. In fact, if I stayed low and didn’t move much, the penguins walked right up to me. For this shot, I got on my knees and used a wide-angle lens, handholding the camera almost at ground level while using live view to compose. I waited for the three penguins to face one another, firing my flash at low power to illuminate the animals against the darkening twilight sky. 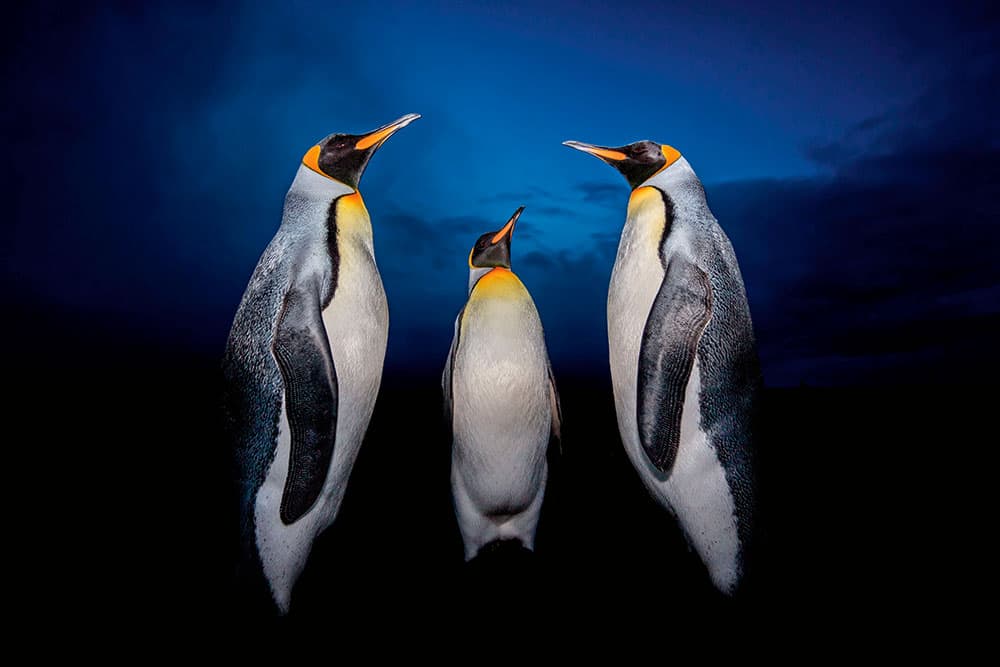 Make the most of dust

I love shooting through what I like to call ‘atmosphere,’ which is basically particles in the air that scatter light, including things like fog, mist, or dust.

Atmosphere softens the light – having a profound impact on light intensity and colour – and can also help to separate a subject from a busy background.

For this image, a bison is giving itself a ‘dirt bath’ stirring up plenty of dust into the air. I selected a position where the dust would be backlit by the setting sun, and then waited for my subject to do something interesting to complete the composition. When the bison looked straight up from the ground and bellowed, everything came together perfectly. The backlit dust helps add a colourful and mysterious look to the image. 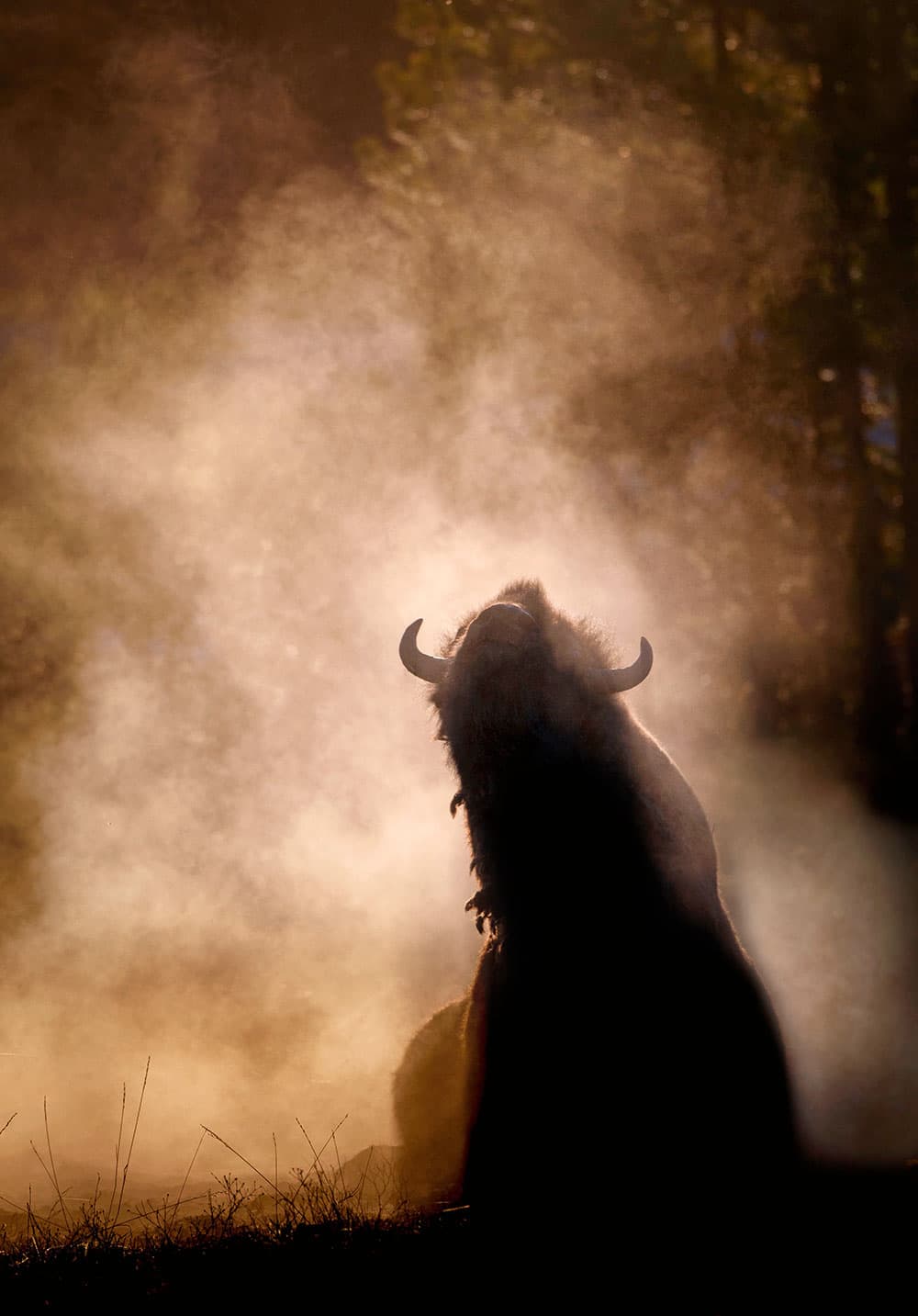 Bison, Yellowstone National Park, USA. A bison giving itself a ‘dirt bath’ stirred up plenty of dust. Ian selected a position where the dust would be backlit by the sun, and waited. Canon EOS 5D Mark II, 500mm, 1/1250sec at f/5.6, ISO 400. Credit: Ian Plant

This arrangement of snowy egrets seems like something out of Hitchcock’s film The Birds. The apparent visual mismatch between the birds and their reflections, caused by my choice of camera position relative to the scene, creates a picture that is unexpected, and one that tells a story to the viewer.

I chose an exposure that ensured the white birds weren’t overexposed, and allowed their busy surroundings to fall into shadow, which helped to simplify the composition and focus attention on the birds. The dark exposure also helped to emphasise the eerie mood I wanted to convey. 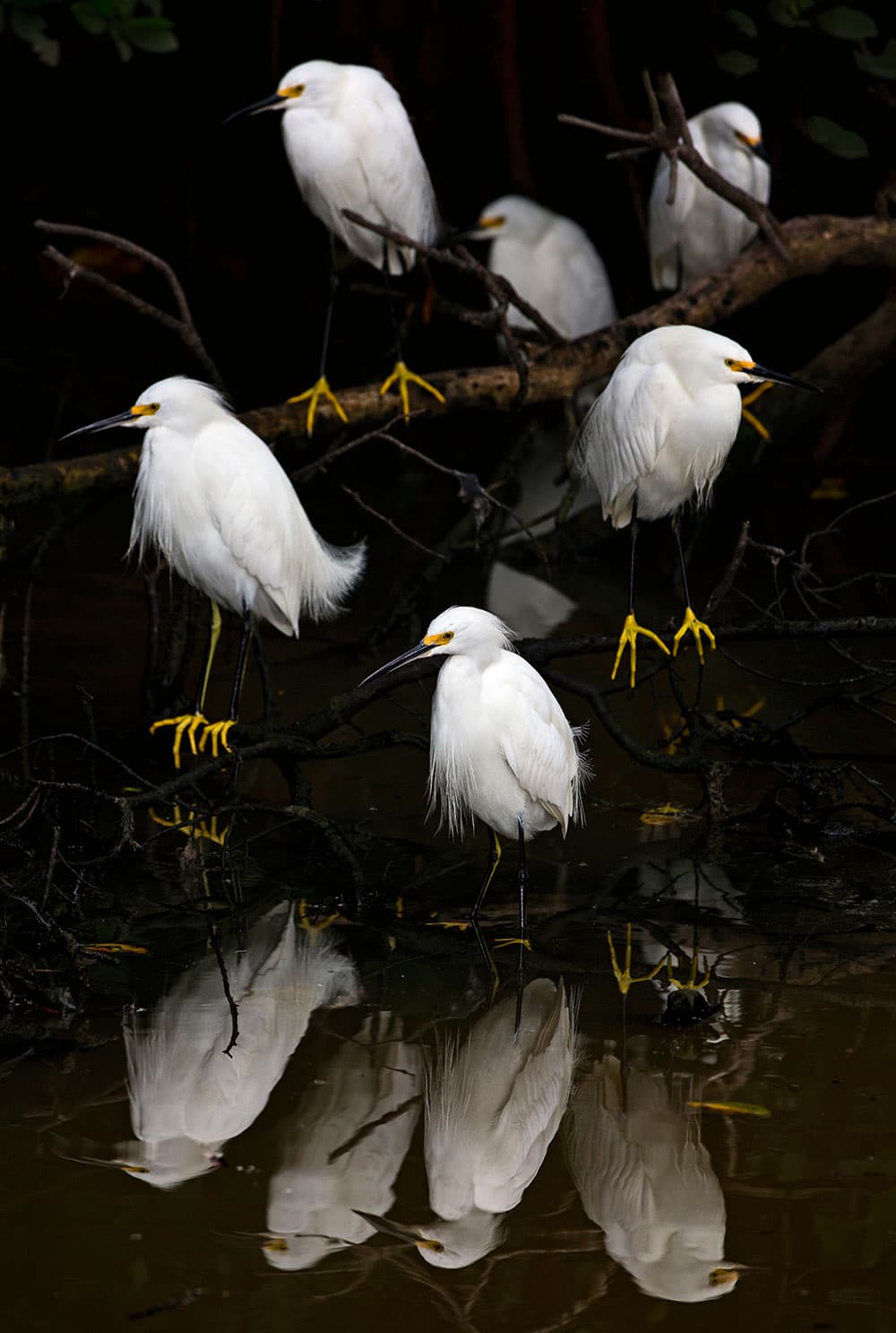 So, the next time you are out taking photographs of animals and wildlife, don’t be afraid to push past the ‘safe’ light so often utilised by others. Delve deep into extreme and low-light situations. If you embrace the technical and artistic challenges offered by these conditions, you will end up with shots that challenge perceptions and show viewers something they have never seen before.

Whether hanging over the rim of an active volcano, braving the elements to photograph critically endangered species, or trekking into the wilderness to places most people will never see, Ian Plant travels the globe seeking out amazing places and subjects in his quest to capture the beauty of our world with his camera. Ian is Managing Editor of Outdoor Photography Guide, a Tamron Image Master, and author of numerous books and instructional videos. You can see more of his work at www.ianplant.com.