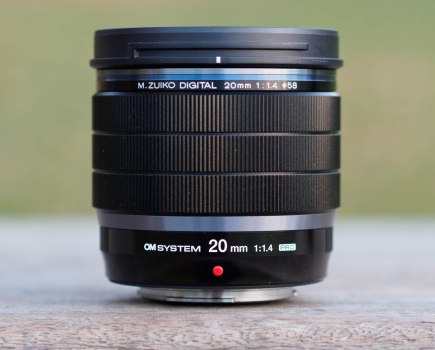 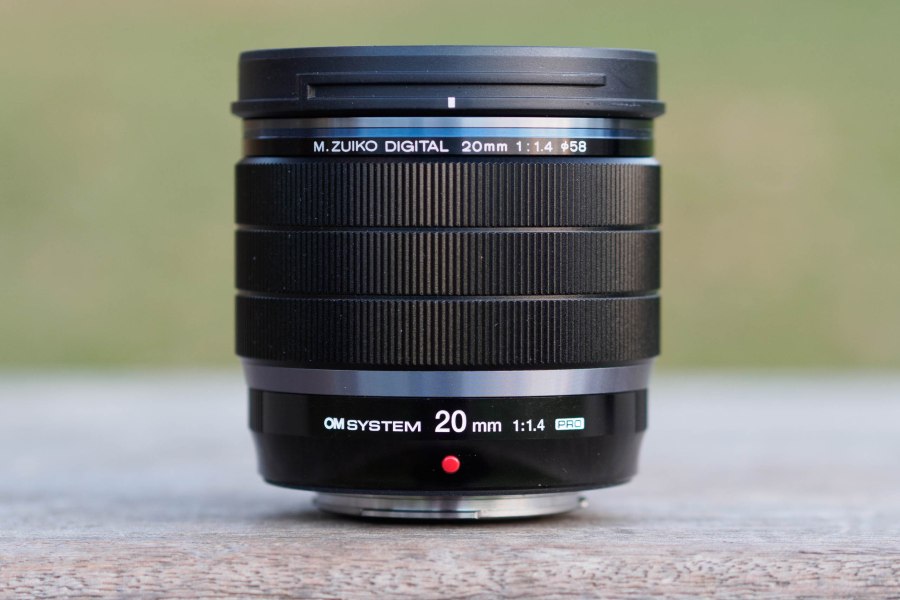 At the start of 2021, the Olympus camera division split off from its parent company to become OM Digital Solutions. Then in late October, the firm announced that new products would no longer bear the Olympus name, but be labelled ‘OM System’ instead, harking back to its 35mm film SLR heritage. The first lens to wear this new-but-old branding is the M.Zuiko Digital ED 20mm F1.4 Pro: a large-aperture standard prime for Micro Four Thirds cameras. 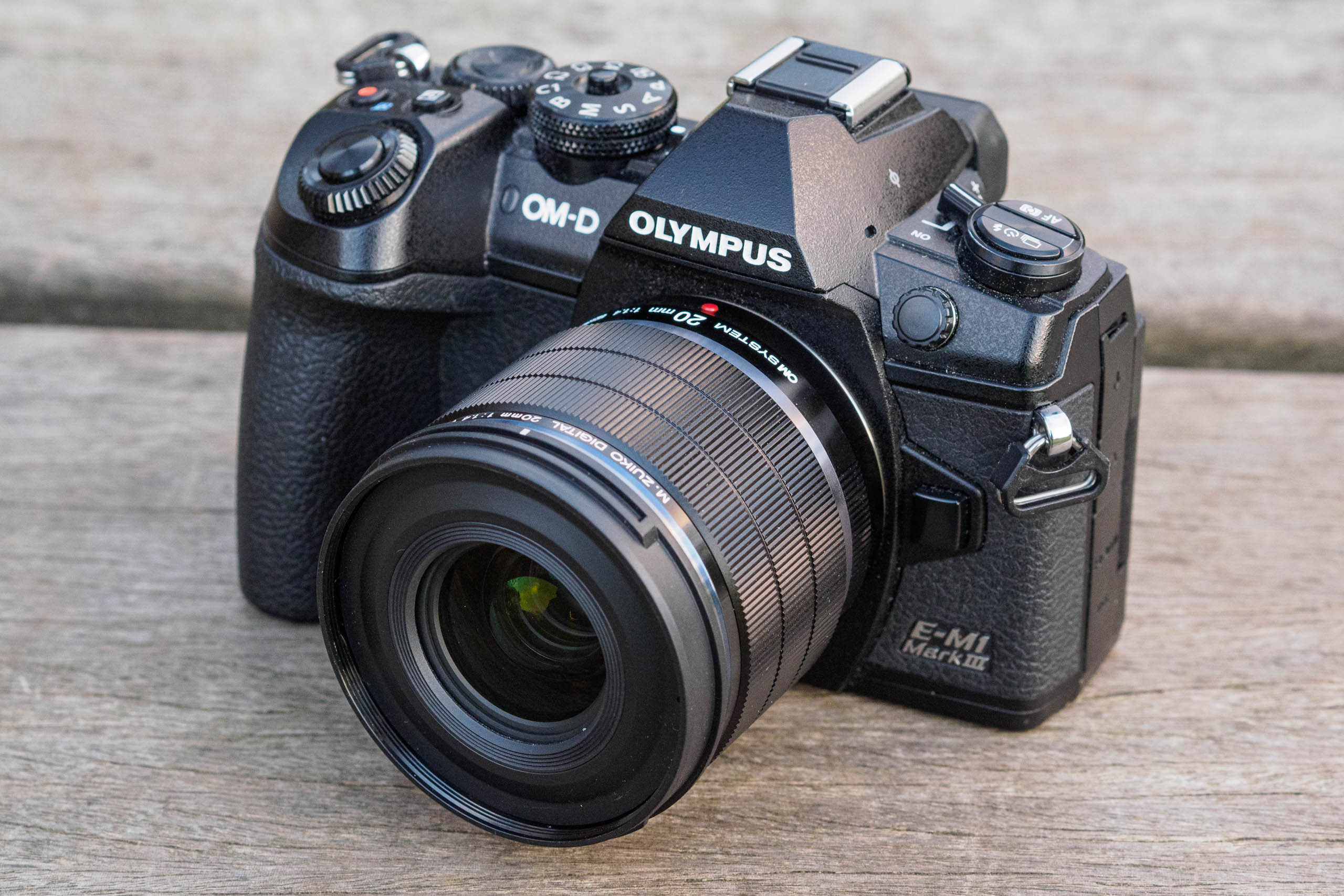 The OM System M.Zuiko Digital ED 20mm F1.4 is designed for use on Olympus cameras such as the OM-D E-M1 Mark III

This lens fills a gap in the M.Zuiko line-up in terms of focal length, aperture, size and price. With its 40mm equivalent field of view (which currently looks rather fashionable), it sits neatly between its existing 17mm and 25mm siblings. Its £650 price tag also occupies a middle ground between the firm’s f/1.2 Pro primes that cost £1100 apiece, and their sub-£400 compact f/1.8 alternatives. 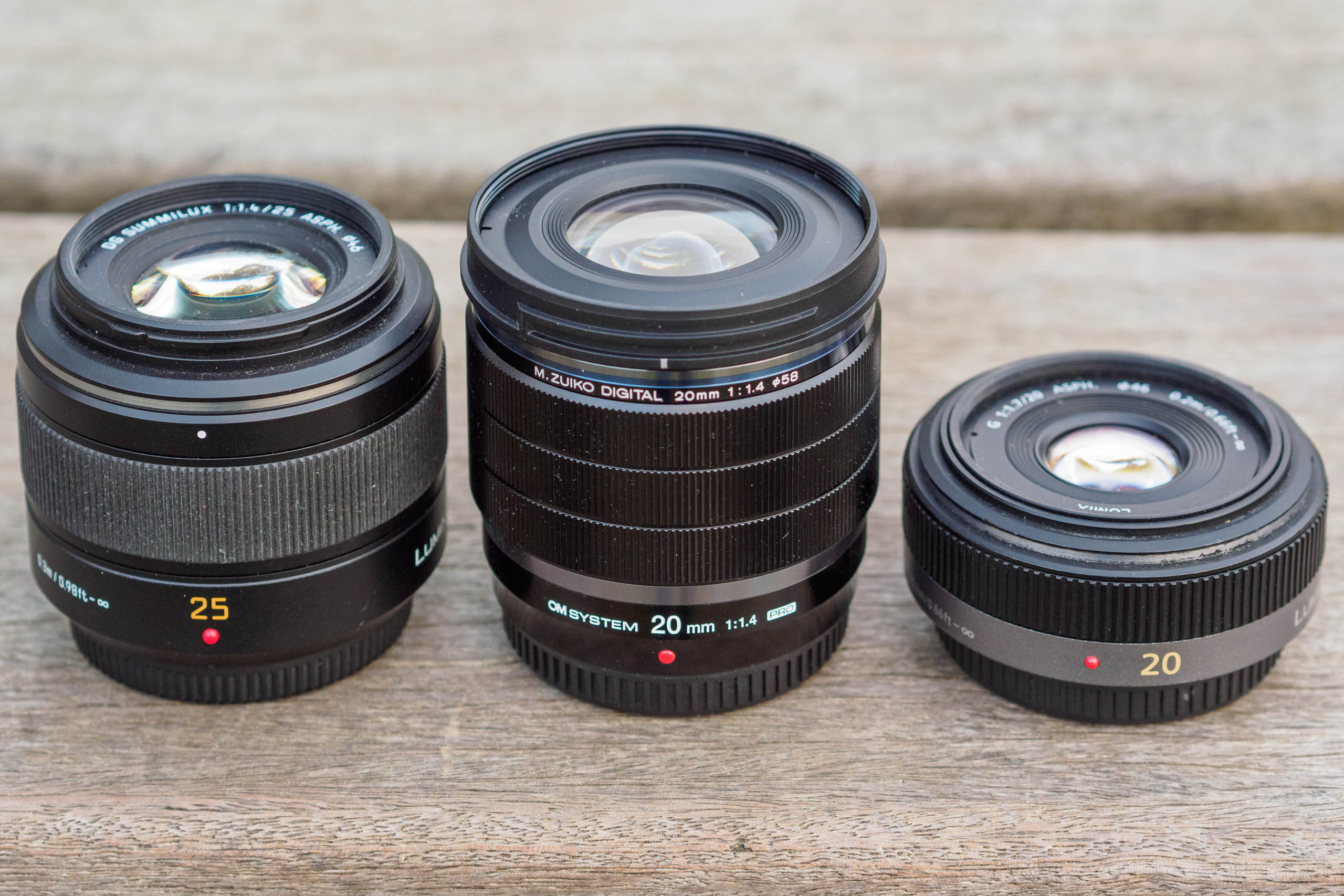 The OM 20mm F1.4 alongside its Panasonic rivals: the Leica DG 25mm F1.4 (left) and Lumix G 20mm F1.7 (right). These are the original versions of the two Panasonic lenses: the updated versions are optically identical, but the 25mm F1.4 II is weather-sealed, while the 20mm F1.7 II is smaller in diameter

However, the OM 20mm f/1.4 does have some rivals from Panasonic. Closest is the Leica DG Summilux 25mm F1.4 II ASPH, which has a street price around £100 less, but is based on a 10-year-old optical design. Fans of the focal length might also wish to know how it compares to the venerable Lumix G 20mm F1.7 II ASPH. Let’s take a look.

With an optical design of 11 elements in 10 groups, the 20mm f/1.4 confirms that its creators have lost none of their taste for exotic formulae. Special elements employed include two with aspherical profiles, two made from extra-low dispersion (ED) glass, one from Super-ED glass, and two from Super High Refractive glass. The stated aim, as usual, is to deliver sharp images across the frame with minimal aberrations such as colour fringing. 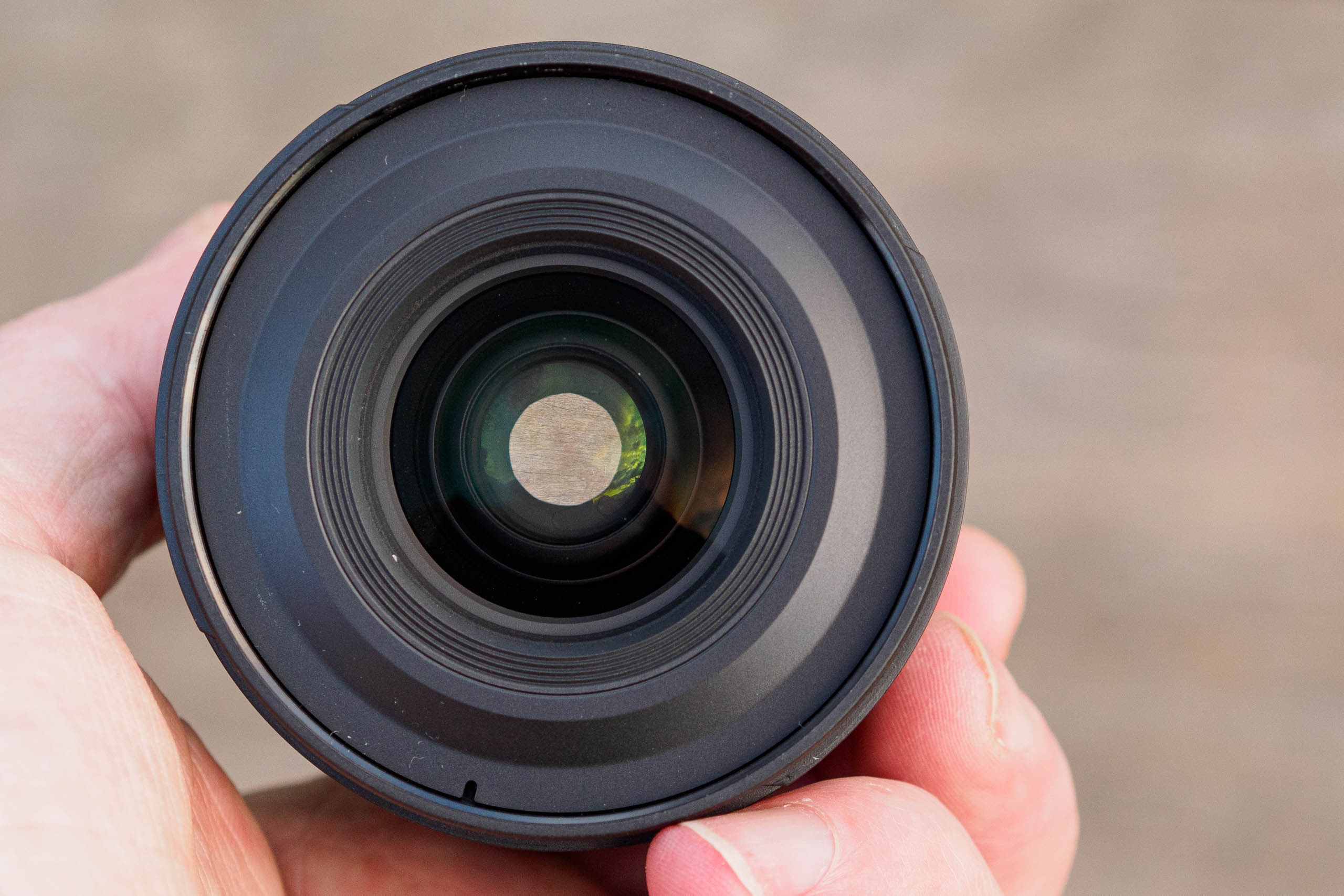 Here you can see the lens’s 9-bladed aperture slightly stopped down, giving a circular opening

With this being a Pro-series optic, premium build quality is on the menu, with the 20mm f/1.4 boasting dust-, splash-, and freeze-proof construction for shooting in adverse conditions. Unfortunately, though, you don’t get two of the Pro line’s staple features, as the lens has neither an L-Fn button on the barrel, nor a push-pull manual focus clutch. 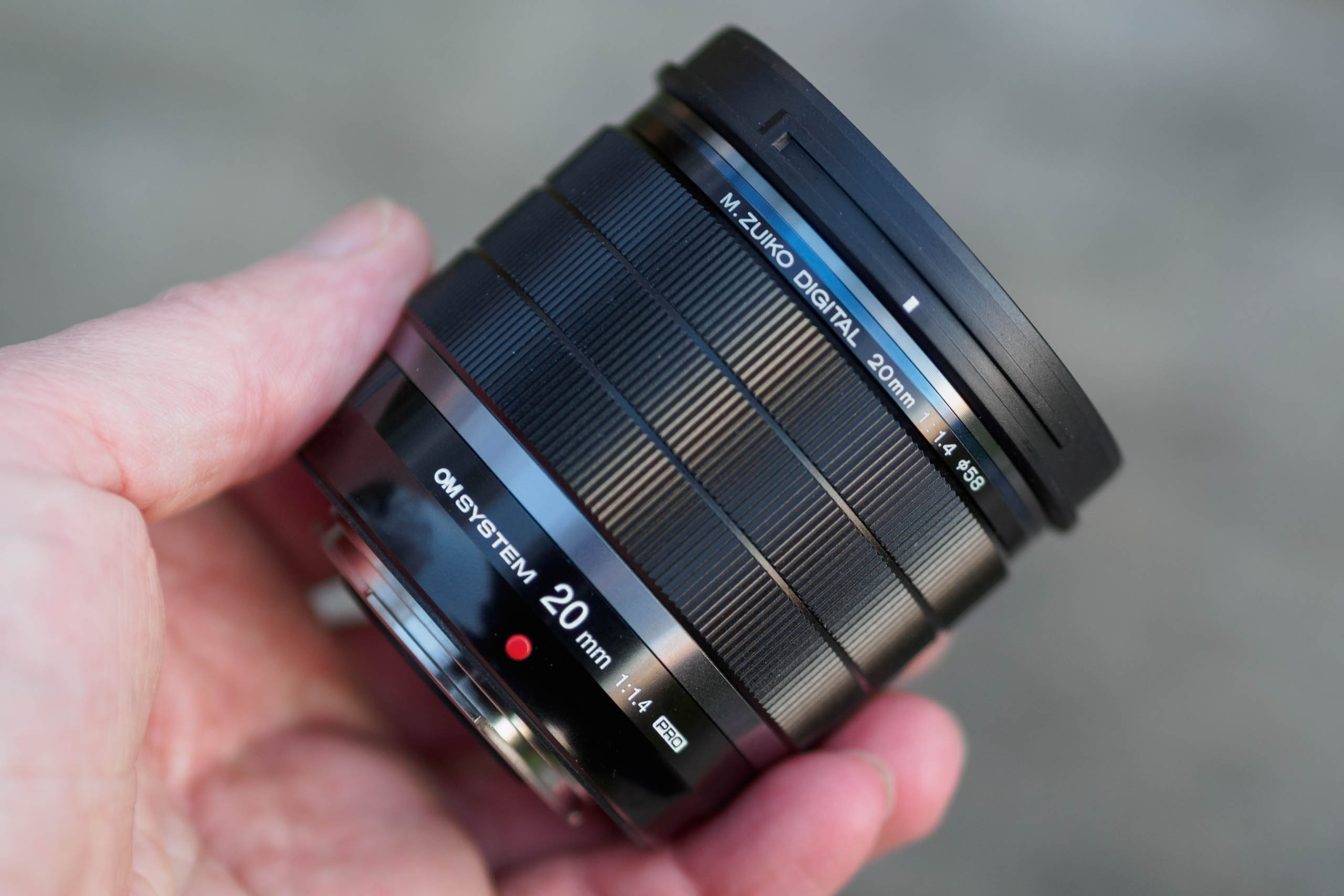 The OM 20mm F1.4 employs a very simple design, with the only control being the wide manual focus ring

Other key features include a minimum focus distance of 25cm, and a 58mm filter thread. 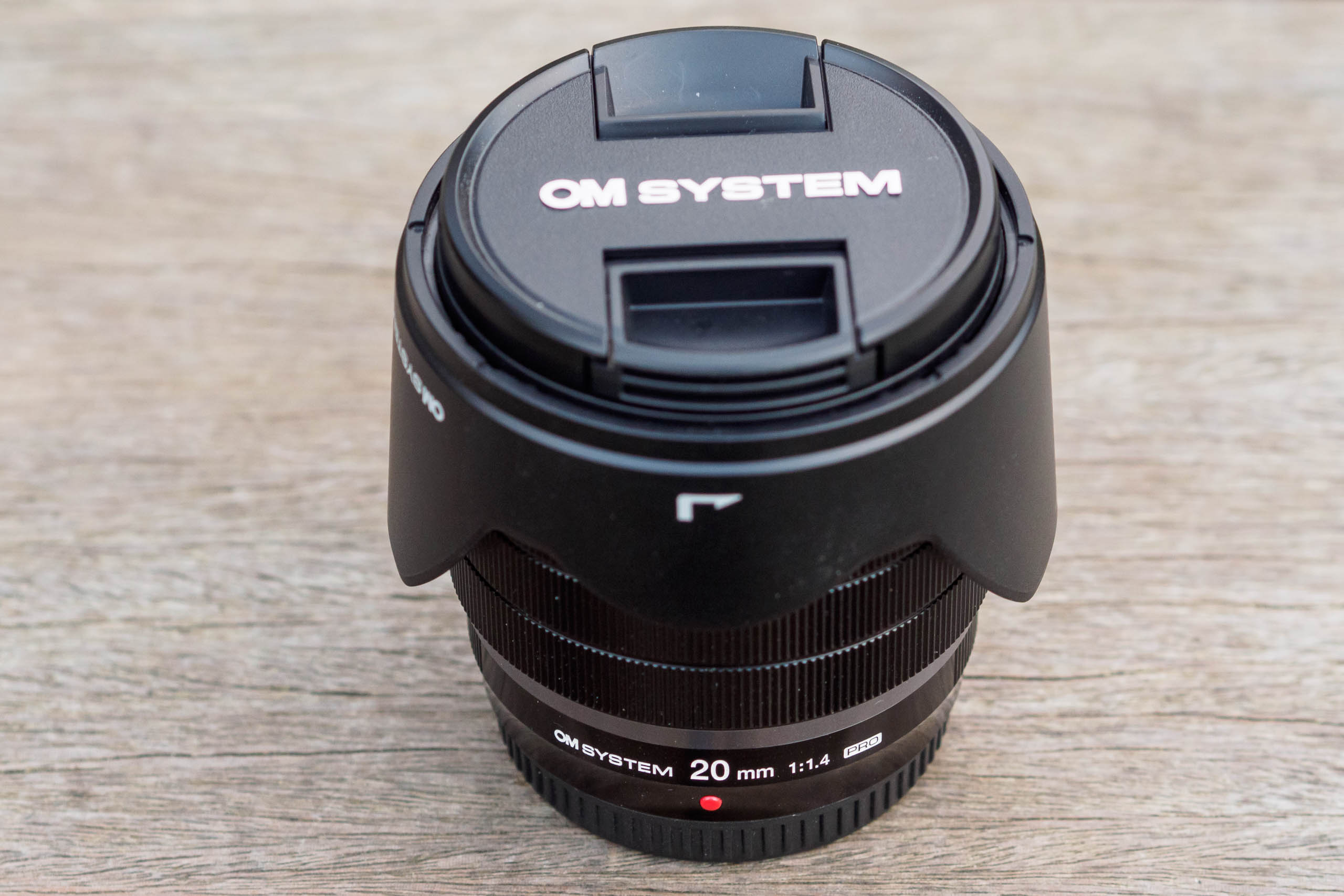 A deep petal-shaped hood is included in the box, which can be reversed snugly when not in use. However, its lightweight plastic construction feels slightly out-of-keeping with the rest of the package.

In terms of build, the 20mm f/1.4 is a close match to other Pro series optics. It employs much the same design language, with a metal-skinned barrel and a large, smoothly rotating manual focus ring with a finely ridged grip. 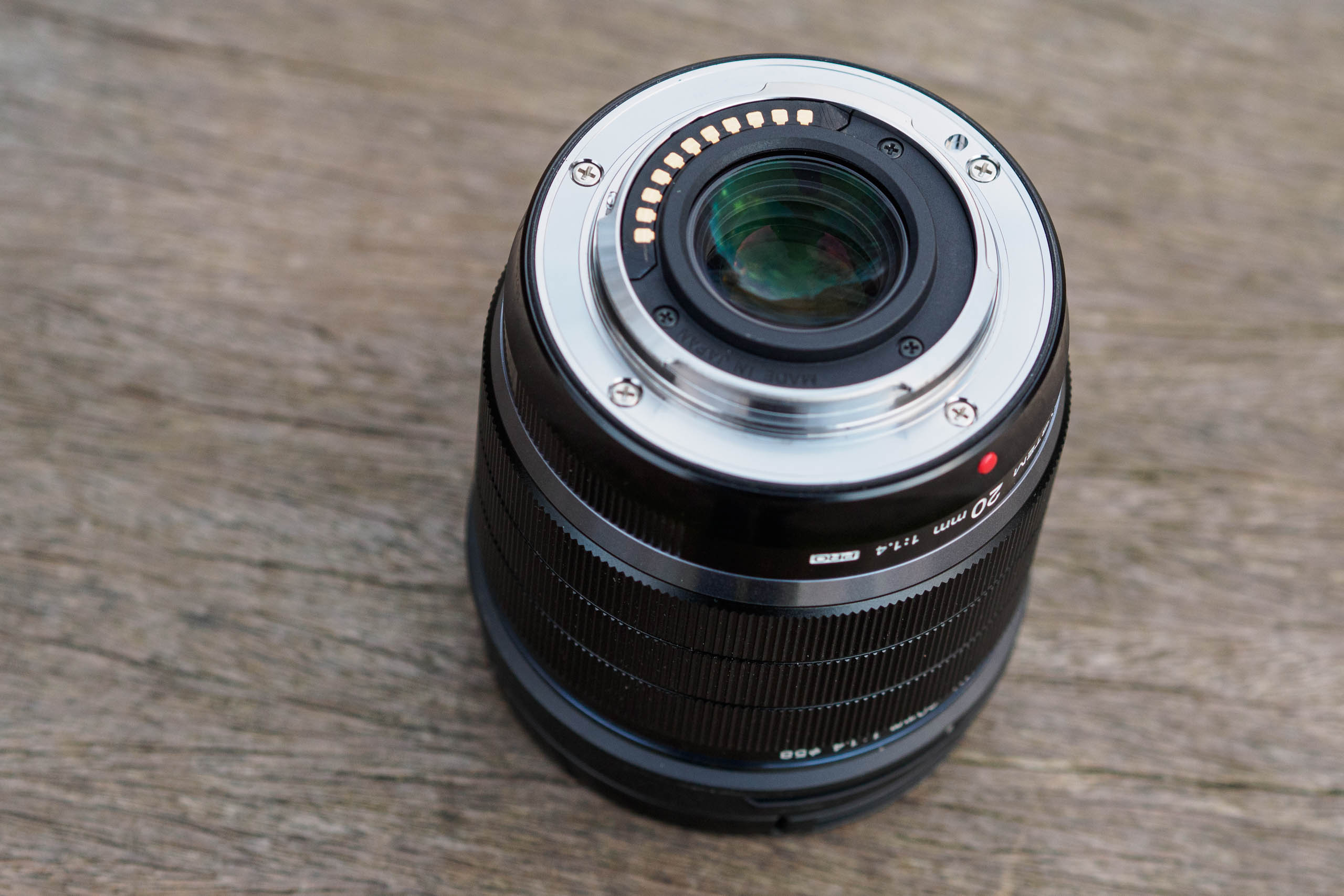 There’s a rubber O-ring seal around the mount

An O-ring seal around the mount is designed to keep dust and water out of the camera, while milled grips on either side of the fixed section of the barrel aid with changing lenses. As a result, the subtle ‘OM System’ label is almost the last thing Olympus users will notice. 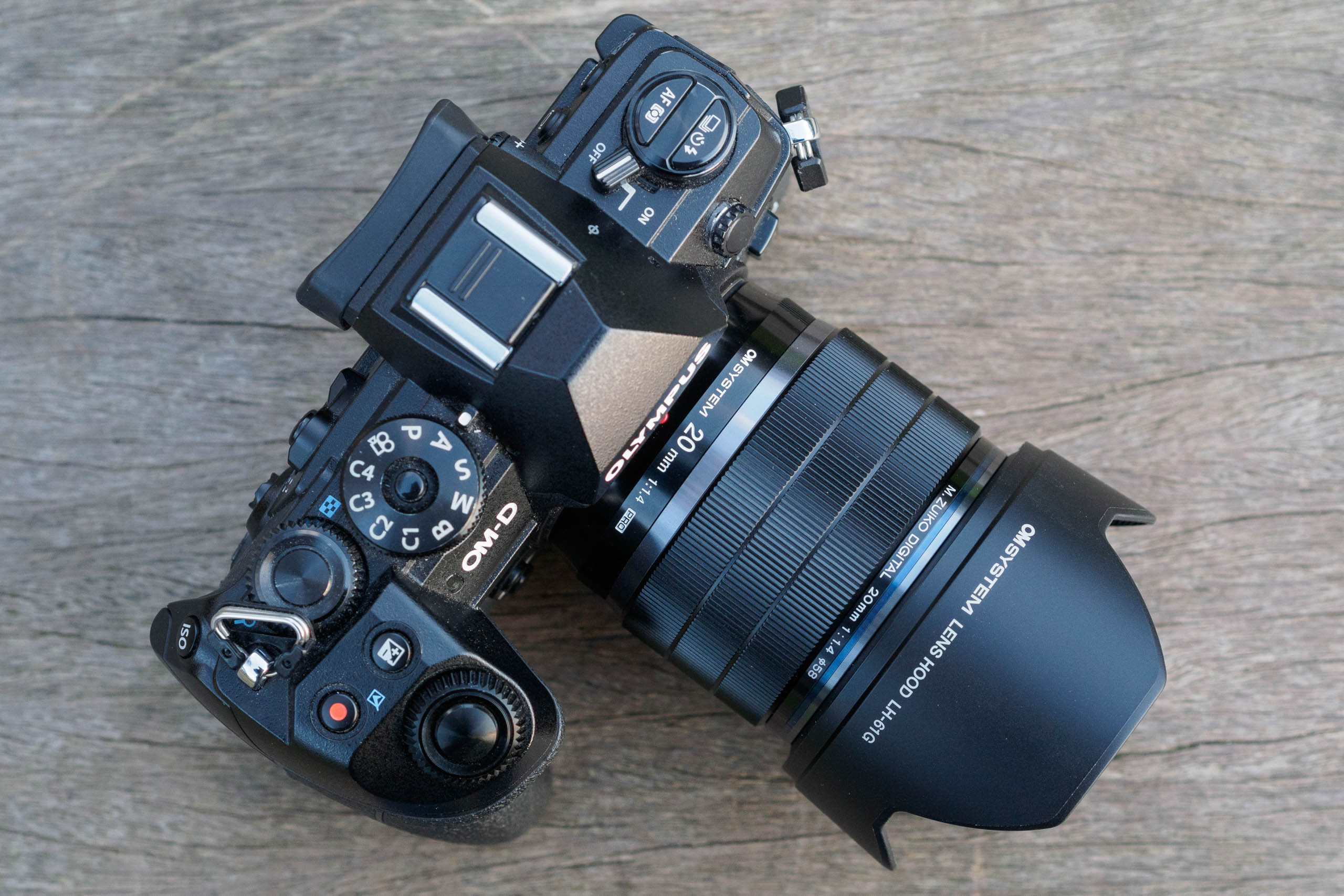 The OM 20mm F1.4 is a relatively compact companion for the OM-D E-M1 III

The OM System 20mm f/1.4 is compact enough not to feel front-heavy on smaller cameras such as the Olympus PEN-F

While I mostly tested the lens on the Olympus OM-D E-M1 Mark III, I found it was also a fine match to smaller bodies such as the E-M5 Mark II and PEN-F, which can’t necessarily be said of the larger f/1.2 optics.

One area where the 20mm f/1.4 holds a clear advantage over its older Panasonic rivals regards AF. It’s noticeably quicker than either and completely silent, which counts as a marked contrast to the 20mm f/1.7’s distinctly audible micromotor. The aperture diaphragm also operates silently, unlike the Panasonic 25mm f/1.4. 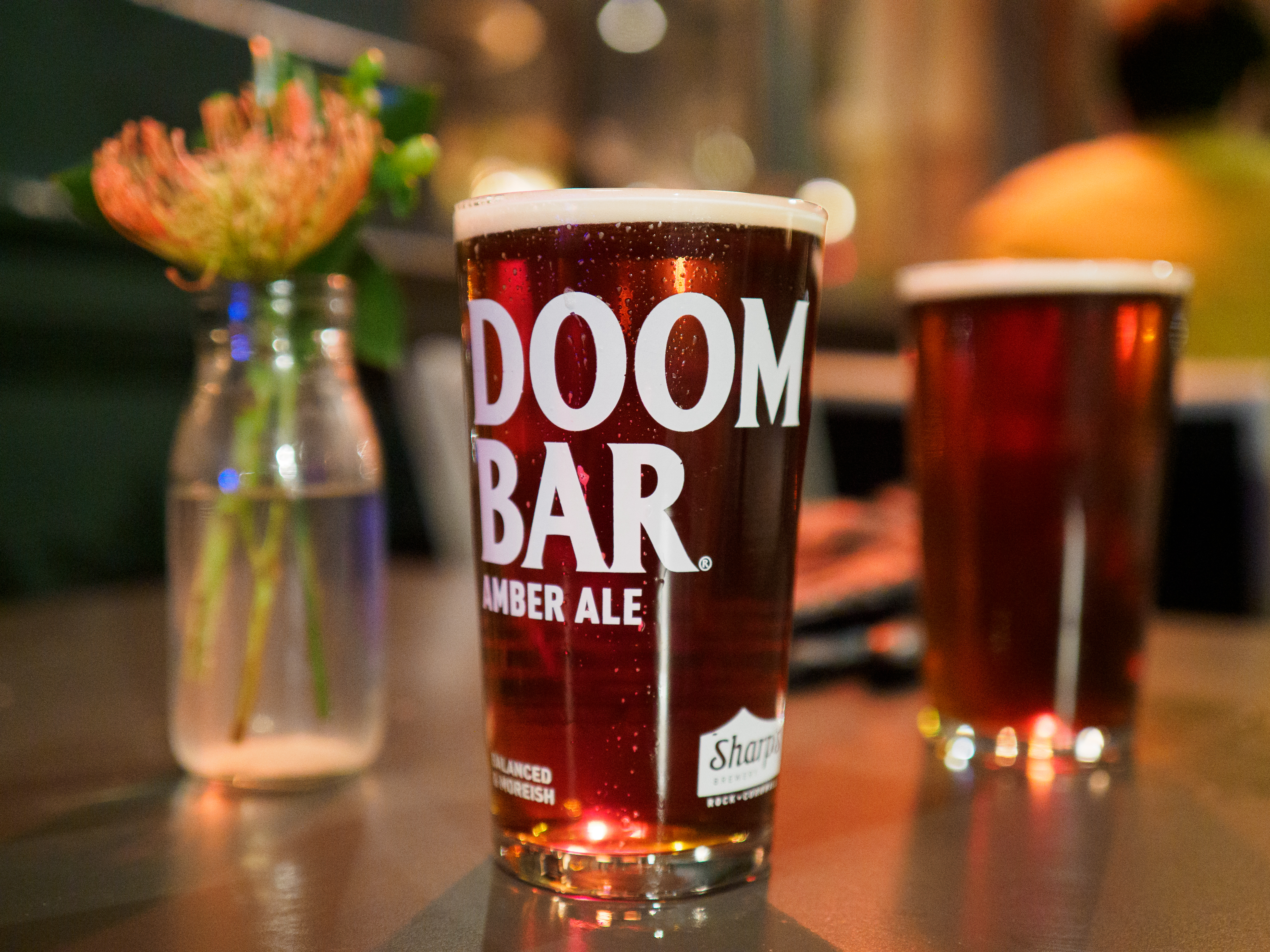 In S-AF mode, the lens snaps into focus instantaneously, not only on the phase detection equipped E-M1 Mark III, but also on cameras that rely on contrast detection for focusing. It also works perfectly with face and eye detection and will keep going happily in extremely low light. Switch to C-AF and the results will mainly be limited by your camera’s AF system. 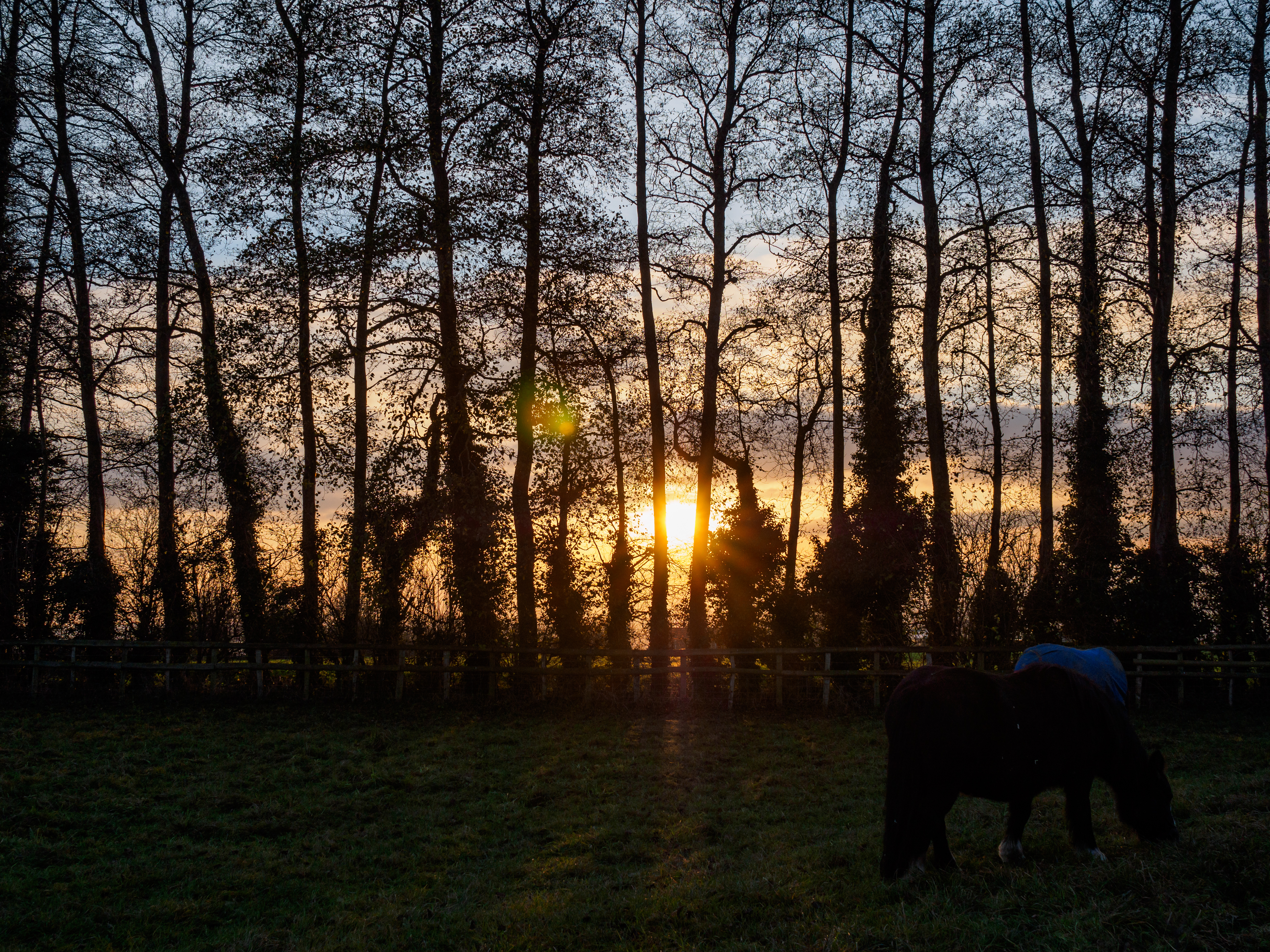 If you wish to focus manually, though, you’ll encounter the lens’s most obvious drawback. With no focus clutch, you have to engage MF from the camera body, either using the focus mode switch or via the onscreen control panel. The rate of focus adjustment is then dependent upon how quickly you rotate the ring, with a quick spin resulting in a large shift, and slow rotation giving fine changes. 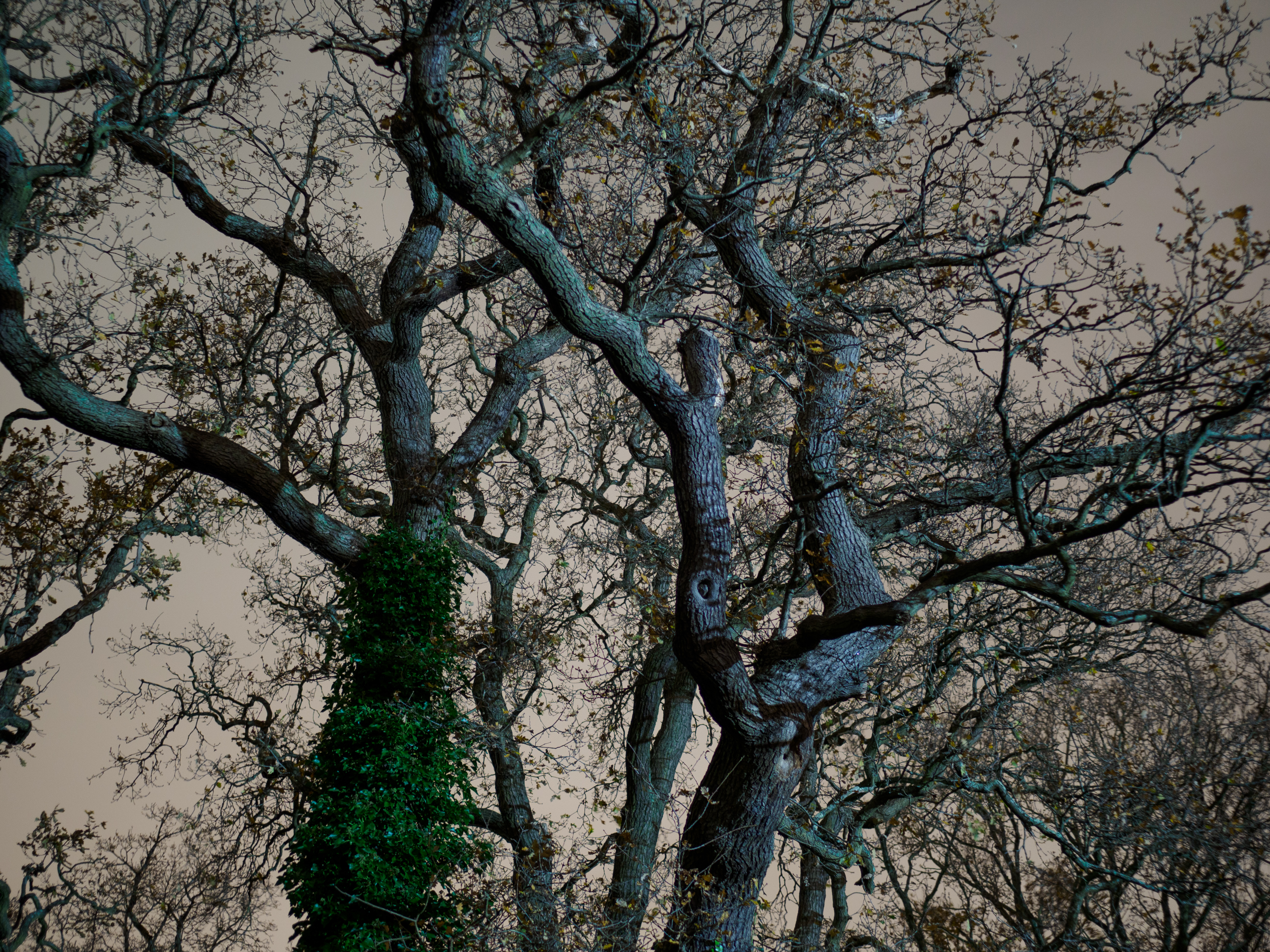 While this works OK, some users will undoubtedly rue the lack of the more intuitive-feeling proportional mode, where the focus distance corresponds directly to the ring’s position, allowing a marked distance scale. Given that more affordable lenses like the 17mm f/1.8 have a push-pull focus ring, the lack of one here is disappointing.

This manual focus setup is also problematic for making controlled focus pulls during video recording, which ironically rather negates the fact that the 20mm f/1.4 exhibits impressively low focus breathing.

When it comes to image quality, there’s not much to say about the 20mm f/1.4 that’s remotely unexpected. It puts in a very creditable performance sharpness-wise, with no visible distortion, not too much vignetting, and little in the way of colour fringing. Instead, the lens churns out good-looking images, shot after shot. 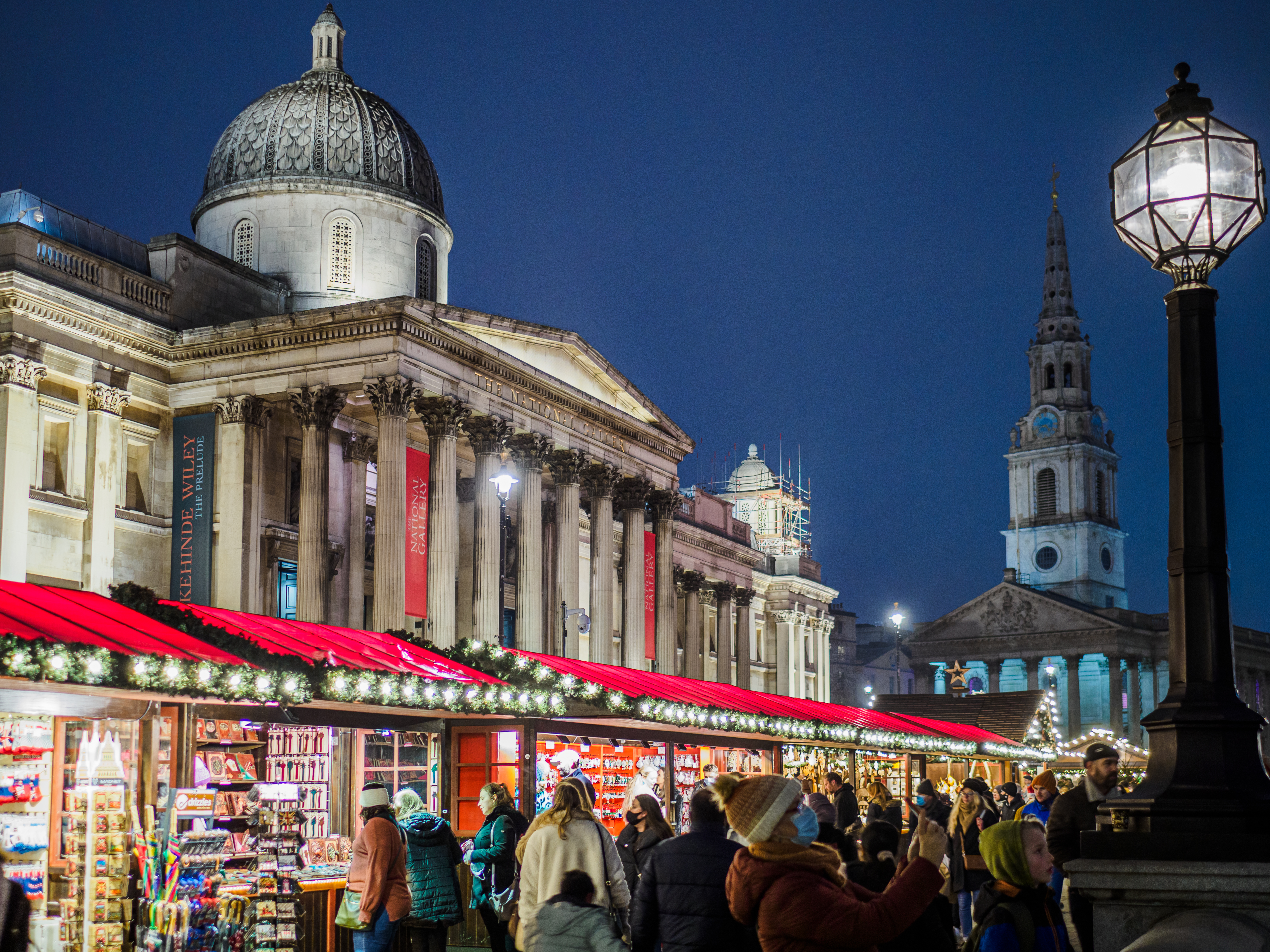 At f/1.4 plenty of fine detail is recorded in the centre of the image, but at somewhat low contrast. This is similar to the 25mm f/1.2, indicating that spherical aberration has been left slightly under-corrected to deliver more attractive bokeh. This effect increases towards the corners of the image, but it’s never excessive. So while you’ll see it when staring at pixels, it’s unlikely to spoil your photos. 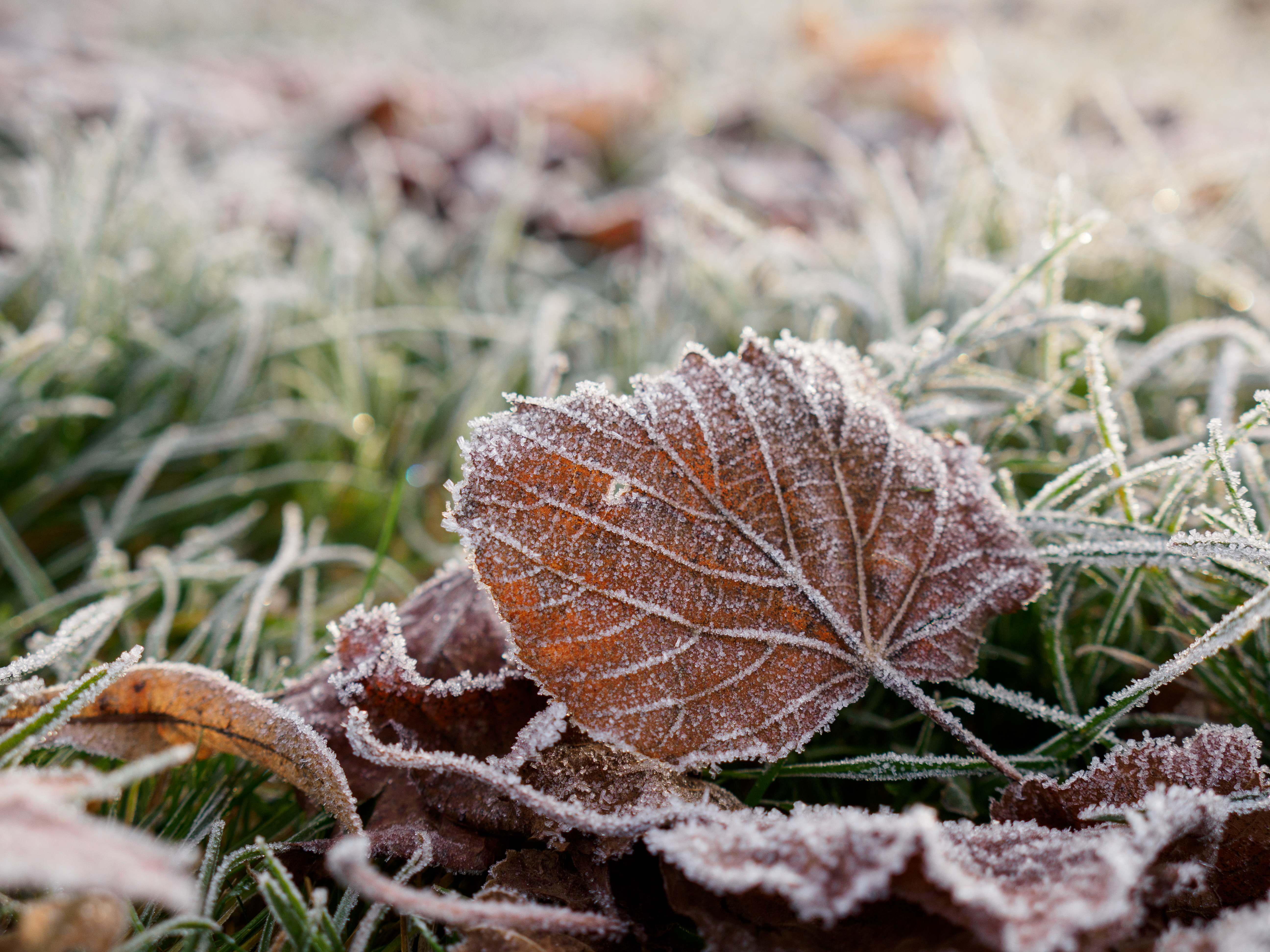 Stop down and everything sharpens up, with the optimum apertures being from f/2.8 to f/5.6. Beyond this diffraction takes the edge off fine detail, and I’d avoid going smaller than f/11. 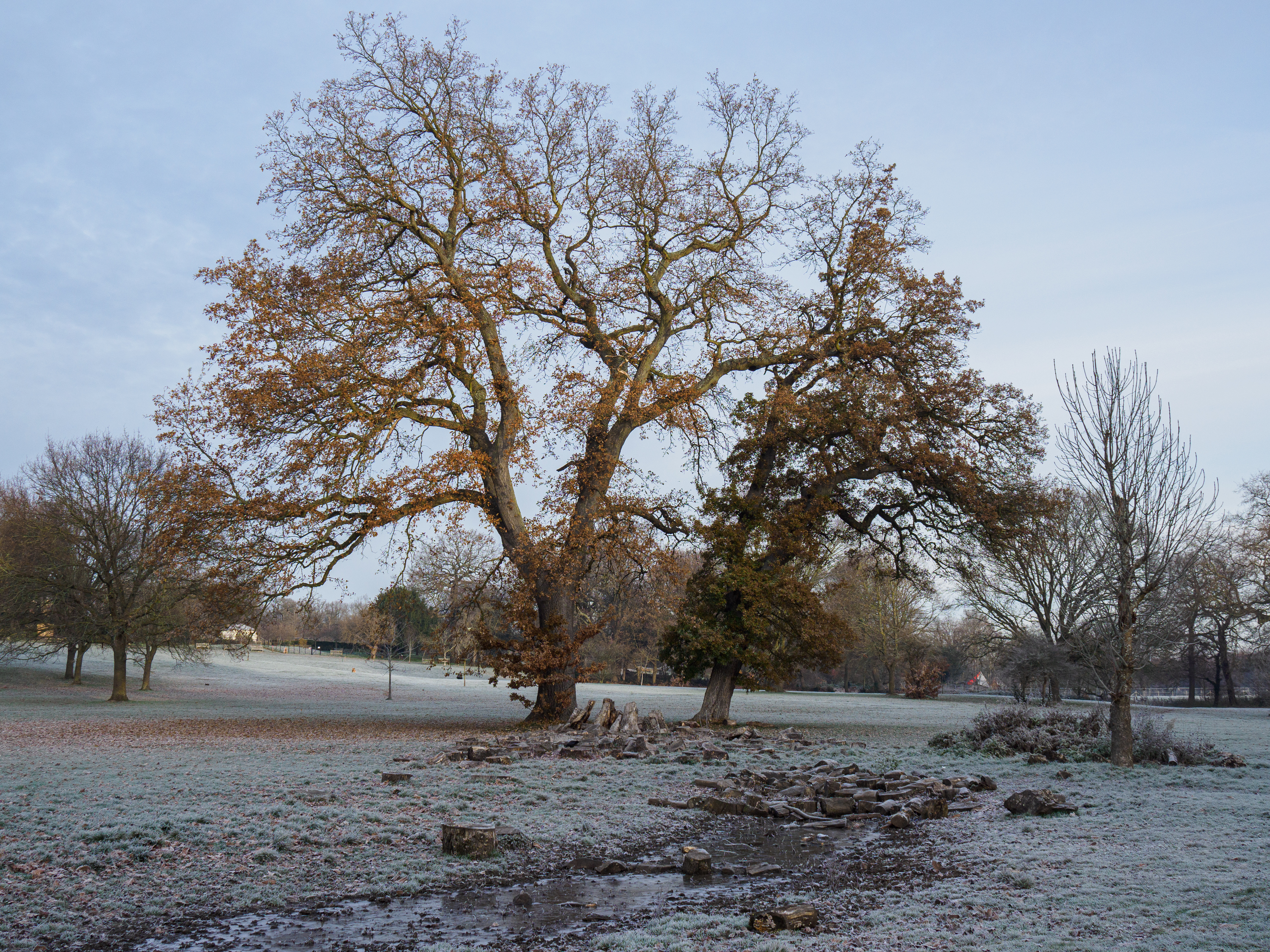 Micro Four Thirds is based around in-camera software correction of lateral chromatic aberration and rectilinear distortion JPEGs, with the requisite correction metadata also being embedded into raw files. As a result, images from the OM 20mm f/1.4 exhibit no visible distortion. 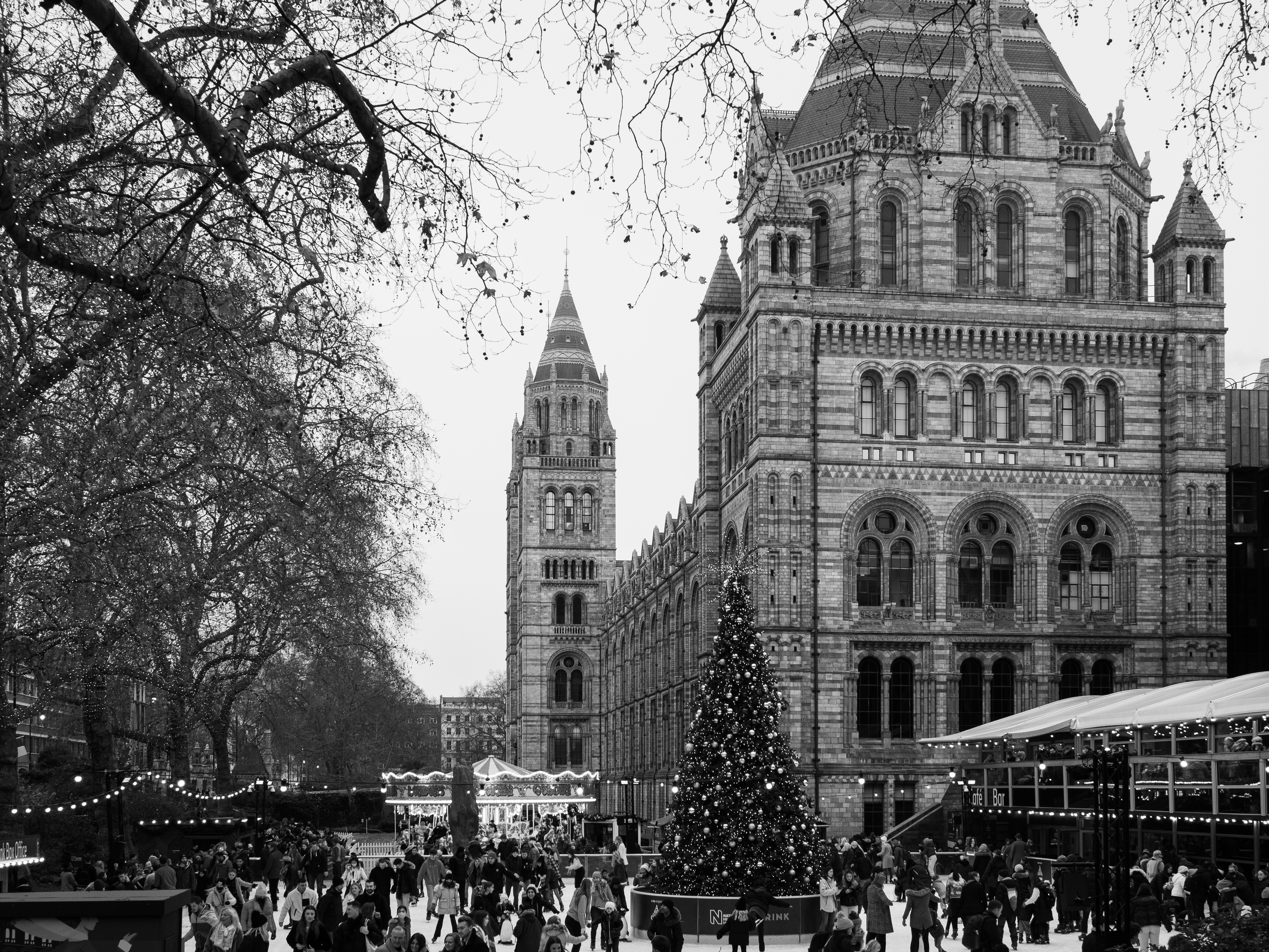 A little colour fringing can still show up occasionally in high-contrast areas with bright highlights, but it’s not excessive and usually a one-click fix in raw processing. Some vignetting is visible at f/1.4, but it’s not remotely objectionable, and disappears on stopping down to f/2.8.

Testing the lens in mid-winter brought home to me that it’s a great choice for Micro Four Thirds users shooting in low light. I wouldn’t hesitate to use it wide open, which helps keep ISOs low. 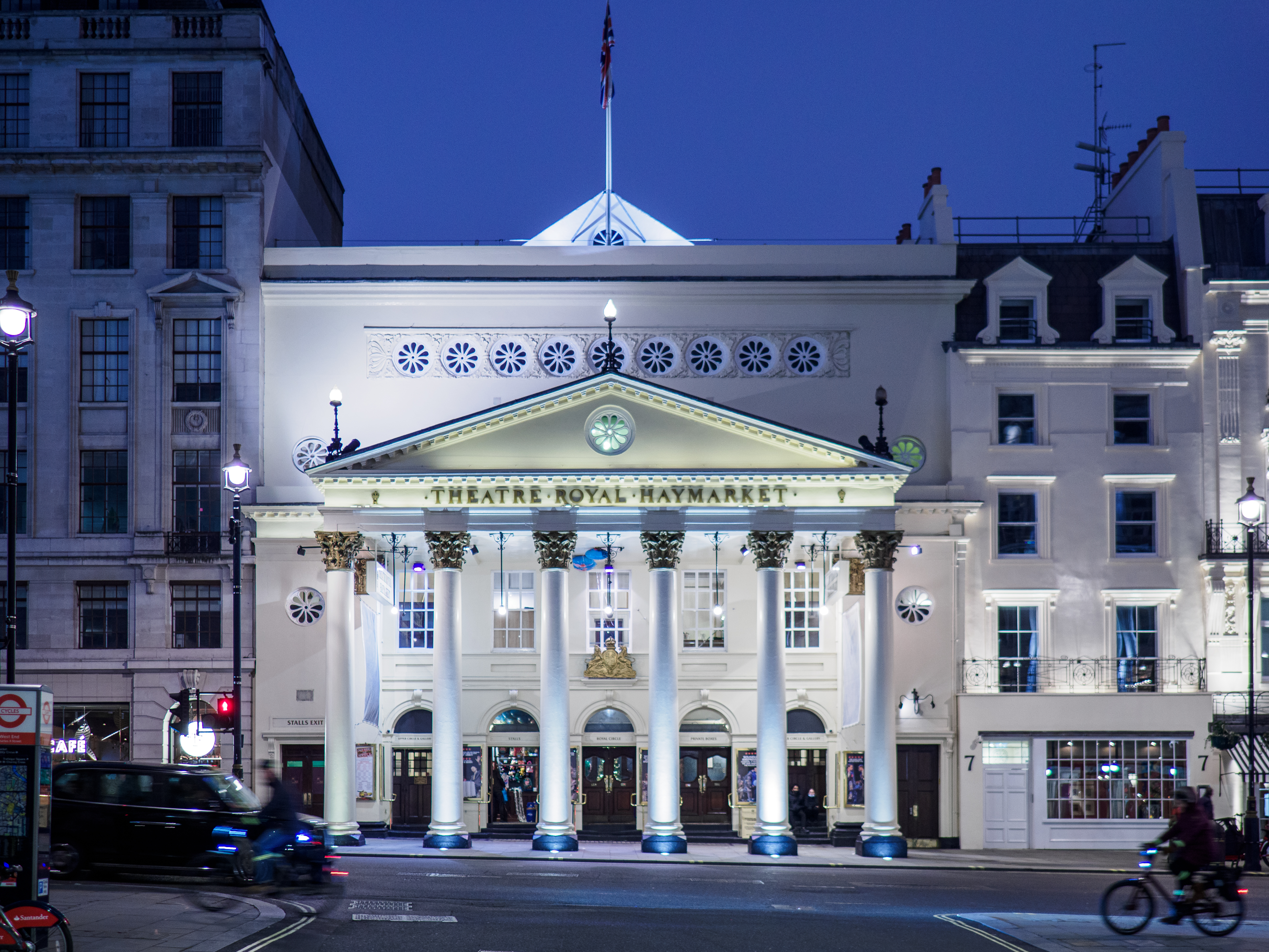 This is reinforced by the remarkable in-body stabilisation of recent MFT cameras, which allows you to exploit very slow shutter speeds hand-held in situations where motion blur isn’t a problem. Using the E-M1 Mark III I was able to get consistently sharp images at shutter speeds of 2 seconds, and sometimes even longer, which in practice meant I could often shoot night-time urban scenes at ISO 200. 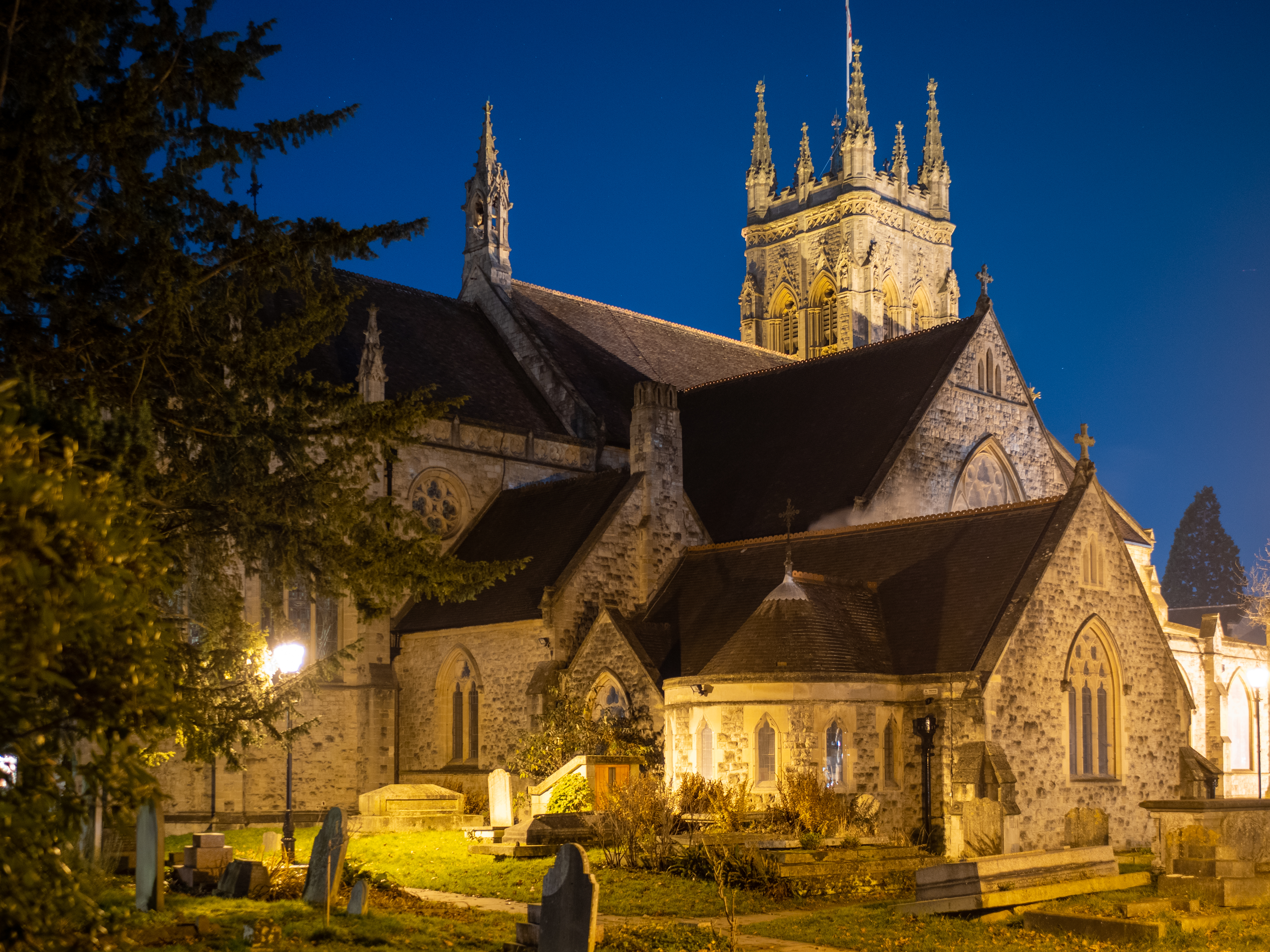 So how does the OM 20mm f/1.4 compare with its Panasonic rivals? With its newer, more complex design, to me it looks a little better than the Leica 25mm f/1.4 in terms of edge sharpness at large apertures, although whether this is of much practical consequence is debatable.

Both offer similarly attractive bokeh, and the ‘Mark II’ version of the 25mm boasts weather-sealed construction if you need it. To me there’s very little between them, so the choice mainly comes down to your focal-length preference, or whether you can get one or the other at a good price. 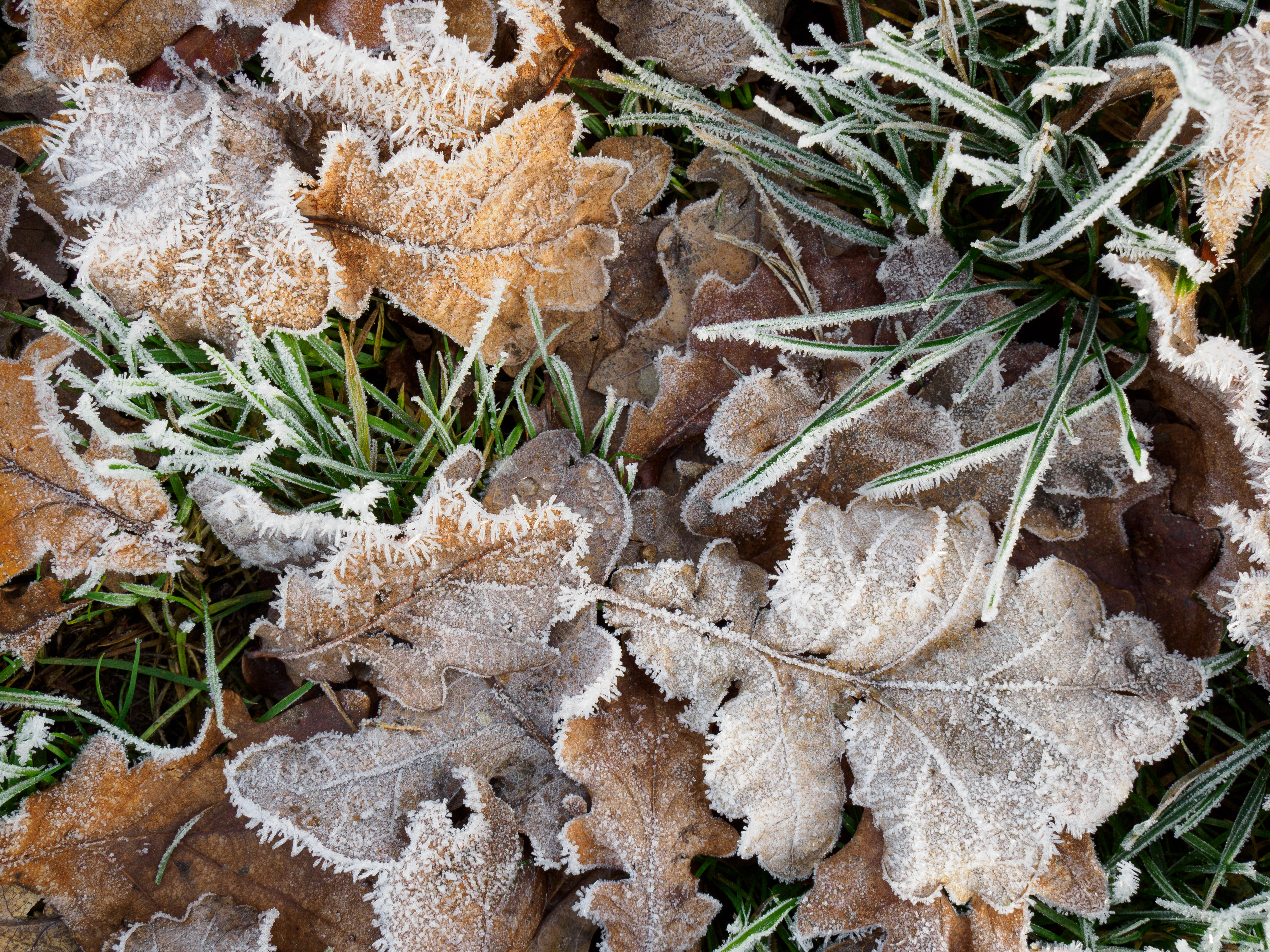 Compared to the Lumix 20mm f/1.7, the OM 20mm f/1.4 is better in every practical respect. Again, it’s sharper towards the edges at large apertures, it delivers visibly smoother, more attractive blur in out-of-focus backgrounds. It’s also considerably quicker and quieter to autofocus. But then again, it’s more than double the length, weight and price, so the 20mm f/1.7 remains a fine choice for users who primarily value portability.

I must admit that this is a lens I’ve wanted to see for some time. While I admire the M.Zuiko f/1.2 Pro primes, to me f/1.4 represents a real sweet spot for Micro Four Thirds. It represents a usefully fast aperture without compromising on portability, which is the system’s main attraction, and the price is much more palatable too. Also, I’ll take a 40mm-equivalent lens over 35mm or 50mm any day of the week. I was always predisposed to like this lens; the question was only whether it lived up to expectations. 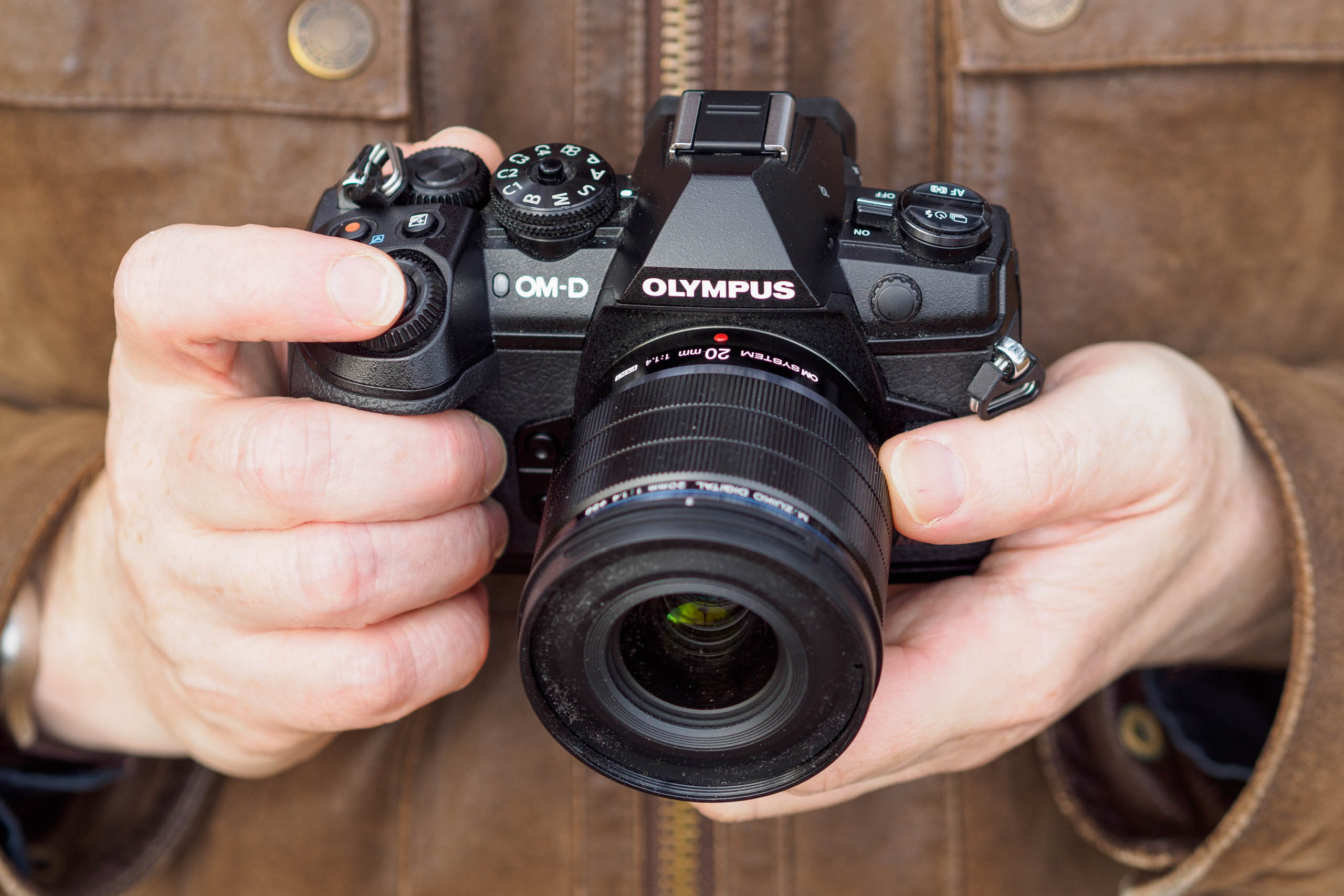 The OM System 20mm F1.4 is a fine lens, but the lack of a push-pull focus clutch is disappointing

Thankfully, in most respects it doesn’t disappoint. Perhaps the only real sticking point is the lack of a focus clutch mechanism, which feels more important on this type of fast prime than it did on the 12-45mm f/4. While the autofocus generally works really well, I missed being able to override it quickly and easily when necessary. Other users will surely miss the L.Fn button, too. 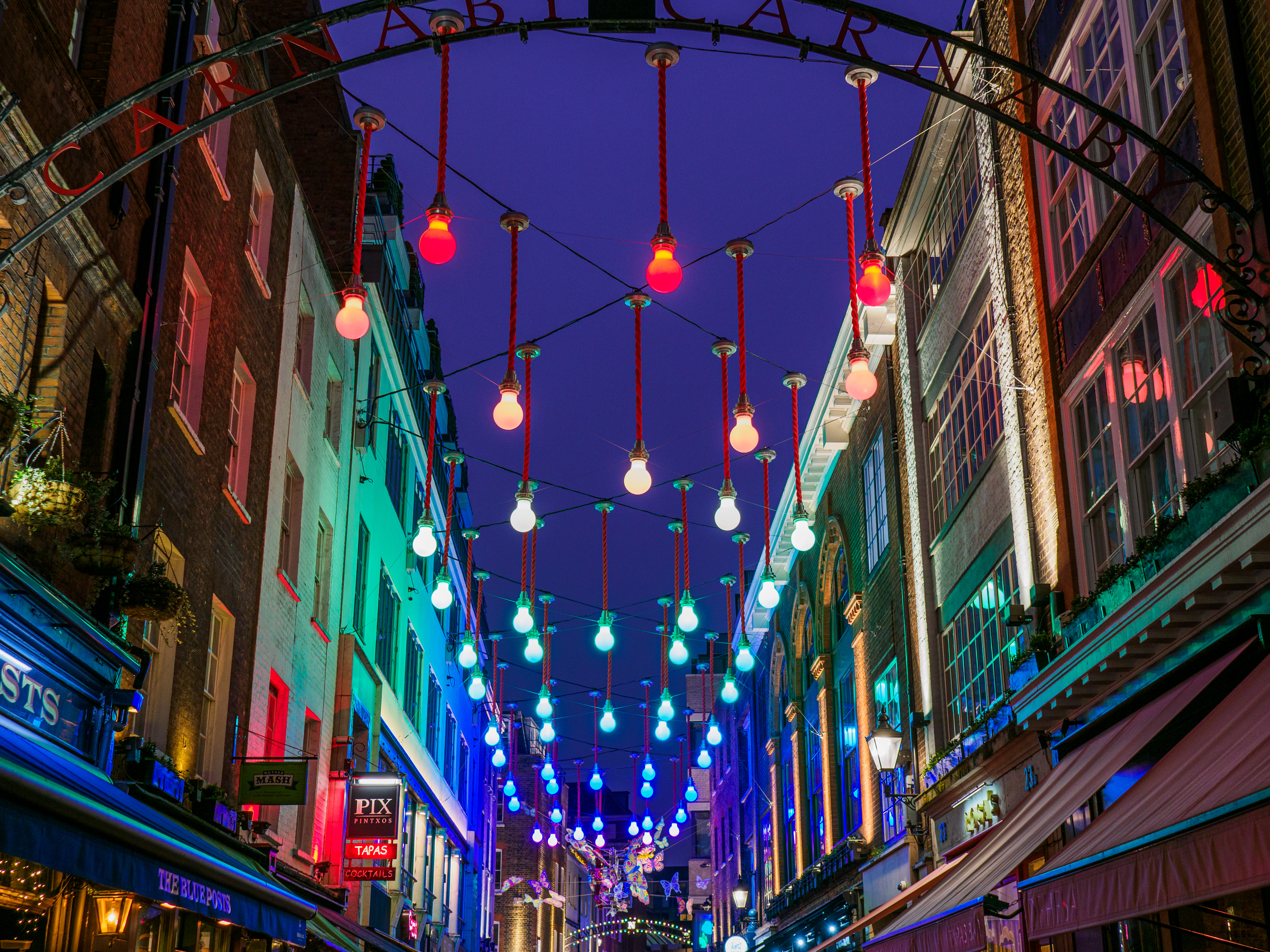 Overall, the OM 20mm f/1.4 counts as a welcome addition to the range and a fine general-purpose lens, especially for low-light shooting. It brings a subtly different character to either 17mm or 25mm optics, delivering very natural-looking images. MFT users in search of a fast standard prime should consider it very seriously. 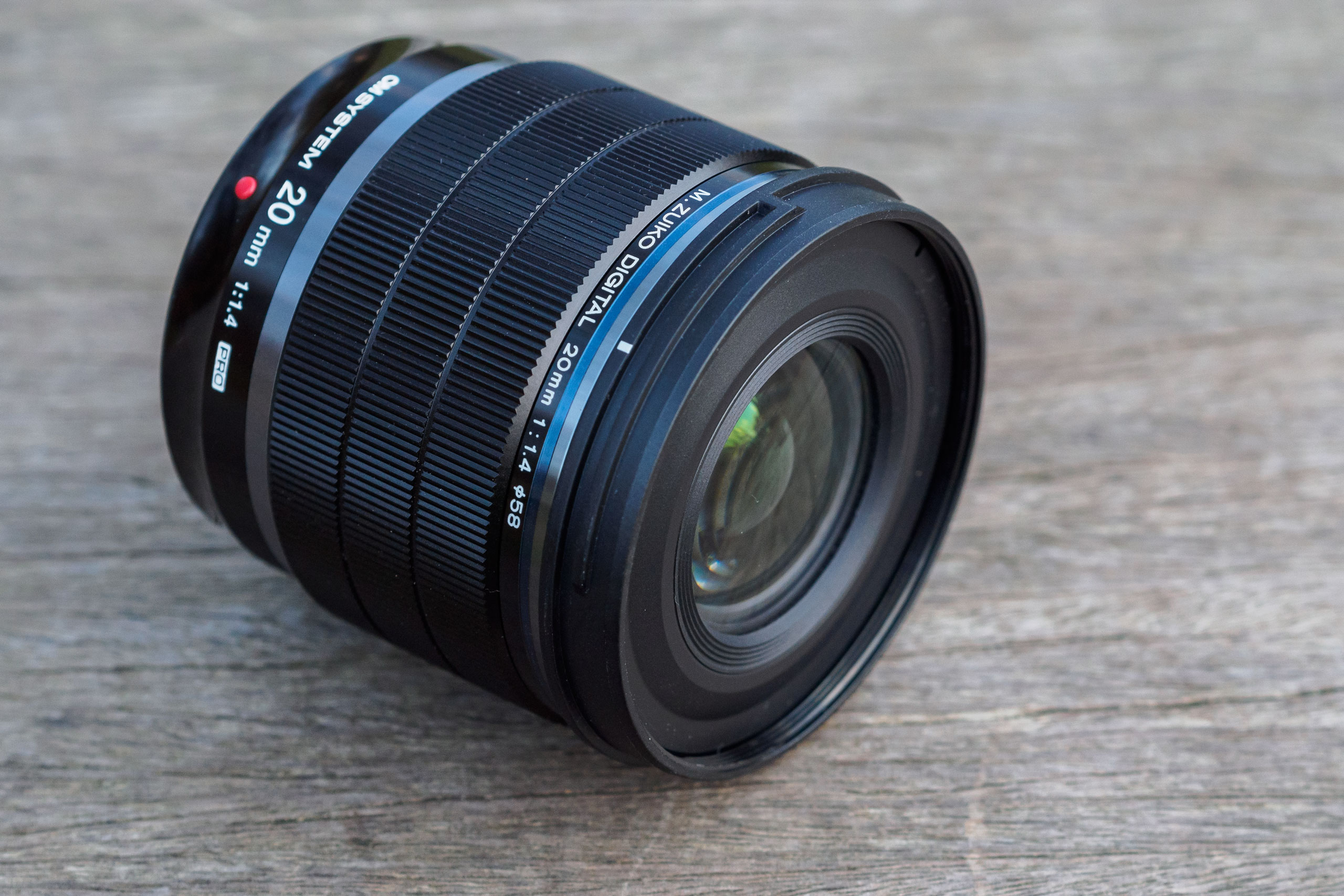