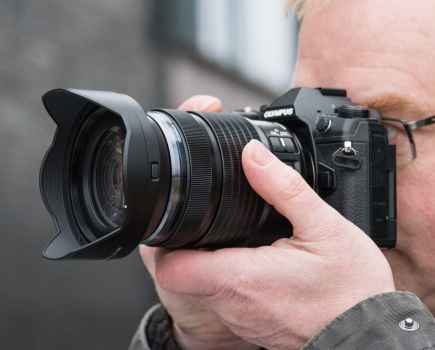 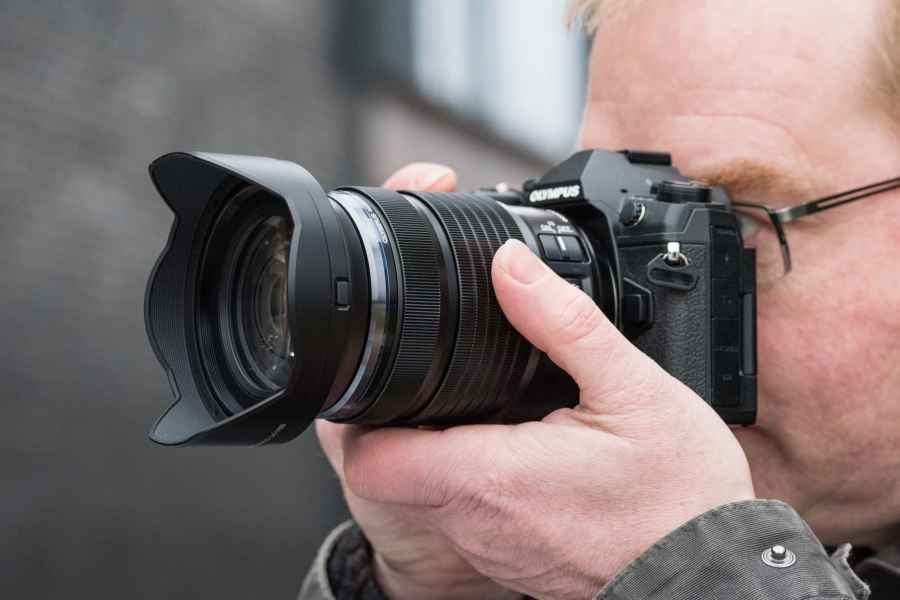 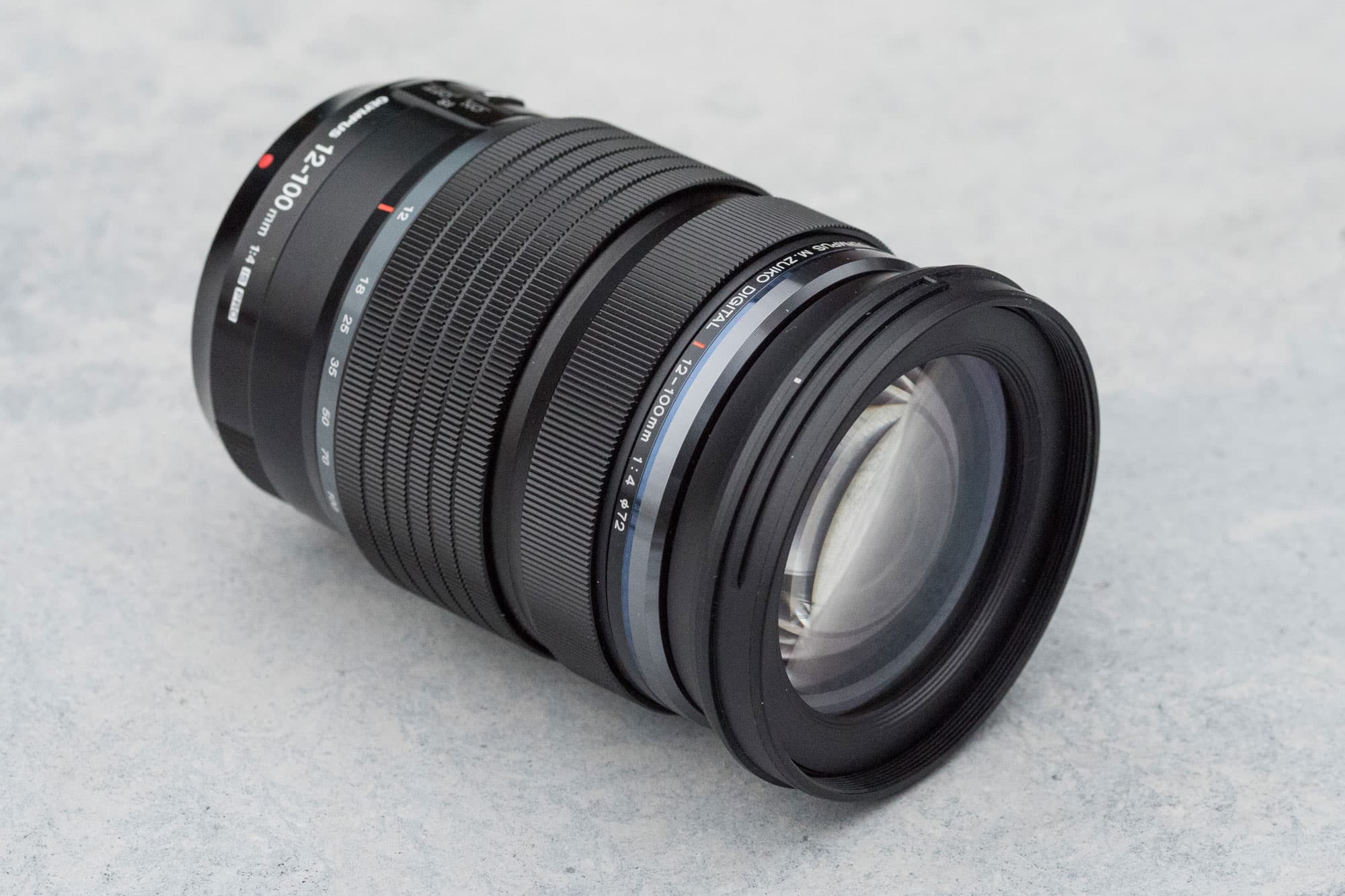 If you’ve been interested in cameras and lenses for any length of time, chances are you’ll have picked up some useful guides as to what kind of kit gives the best image quality. It’s widely understood that cameras with larger format sensors should give better results than those with than smaller ones, and that fixed focal-length prime lenses are sharper than zooms. When we compare zooms, those with relatively short 3x ranges are best, outperforming those that cover a wider range of focal lengths. All-in-one ‘superzoom’ lenses with zoom ratios of 7x or greater are really all about convenience, requiring considerable optical compromises to achieve their extended range.

So what to make of Olympus’s 12-100mm f/4 lens, that was launched alongside the firm’s flagship OM-D E-M1 Mark II at the end of 2016? It’s an 8.3x superzoom for Micro Four Thirds cameras, which have sensors somewhat smaller than the common APS-C format found in most enthusiast DSLRs and mirrorless cameras. Surely this must be a marriage made in hell, at least in terms of image quality? Well, sometimes it turns out that what we think we know is wrong. 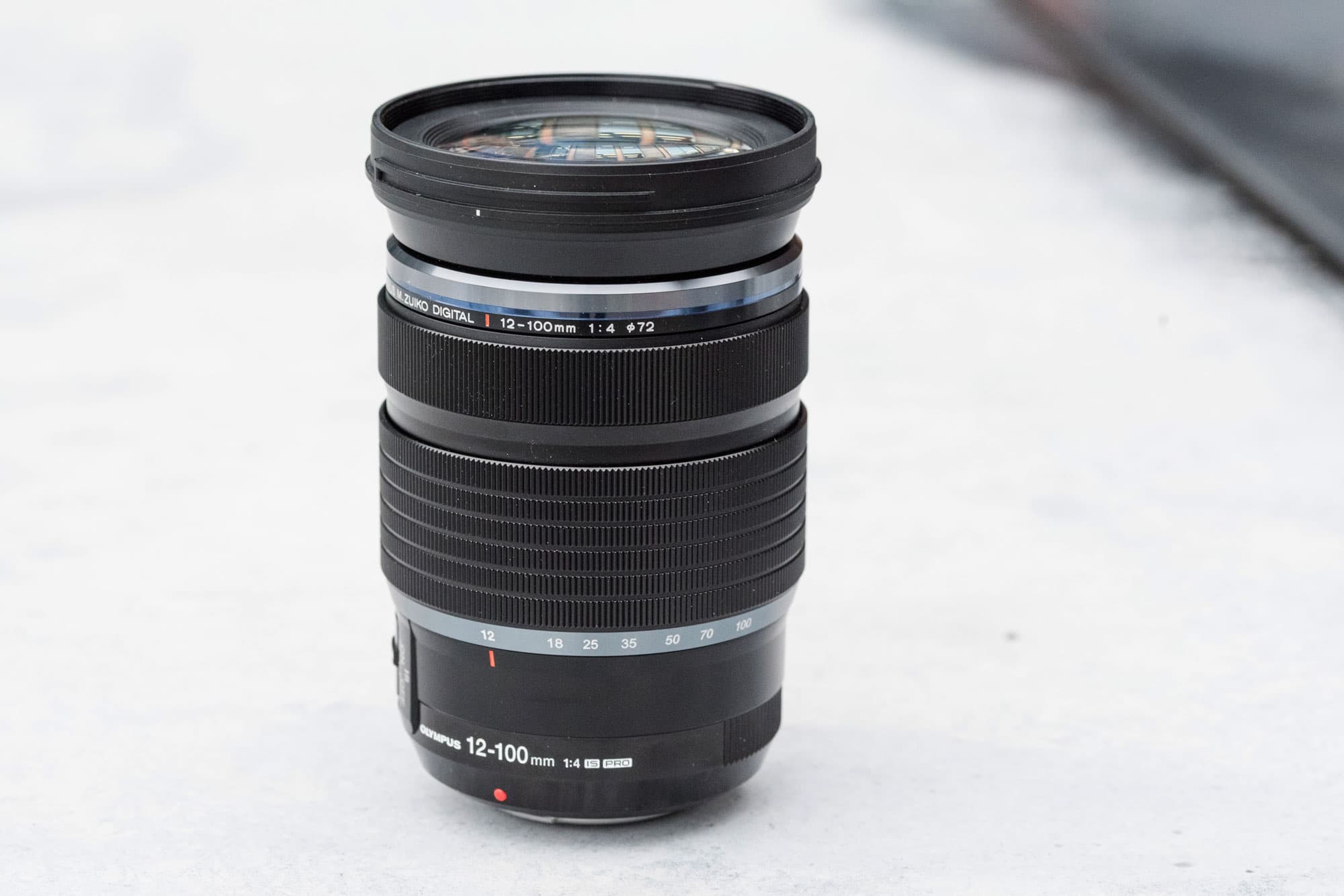 The giveaway that things might be different here comes in the lens’s name, not to mention its price. The ‘Pro’ designation means that it’s in Olympus’s top line, with weather-sealed construction and premium optics. Meanwhile the £1100 price tag indicates that the firm hasn’t skimped in solving the problems posed by such an ambitious design. To cut a long story short, the result is the probably the best superzoom ever made.

As all-in-one zooms go, the 12-100mm is unusual in many respects. It’s one of just a handful of such lenses starting at a 24mm equivalent wideangle, compared to the more usual 28mm; in return, it extends rather less far at telephoto. The closest comparable optic is Sony’s FE 24-240mm f/3.5-6.3 OSS for full-frame mirrorless, but at £750 this has less lofty ambitions. 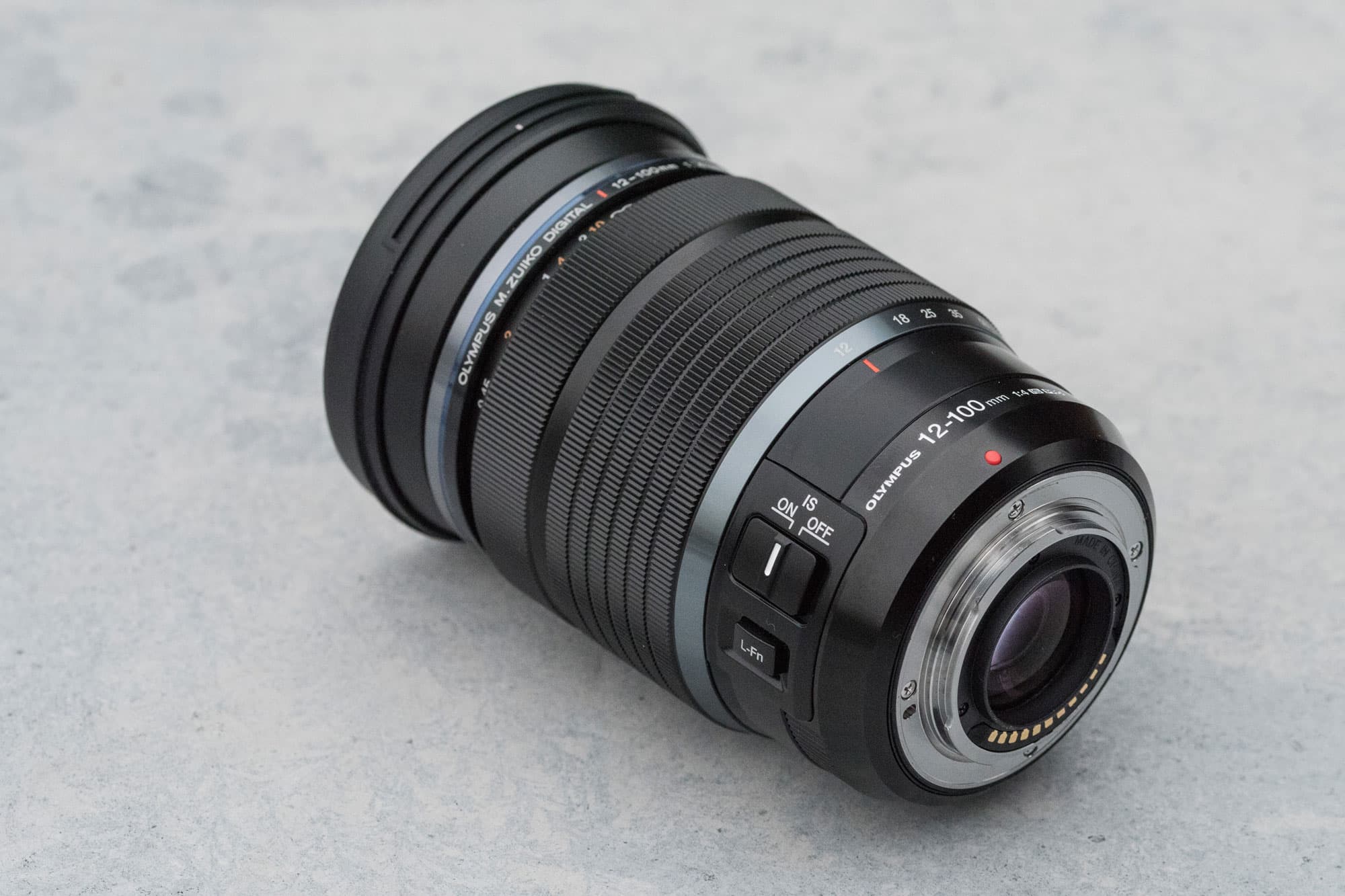 An indication of just how unusual the 12-100mm is lies in its optical formula, which comprises 17 elements in 11 groups. But this includes new fewer than 12 special elements to maximise image quality: three aspheric elements; one dual-sided aspheric (DSA); one element made of high refractive-index (HR) glass and two of Super HR glass; and five of extra-low dispersion glass. Olympus has also employed its Z Coating Nano to reduce flare and ghosting.

Close-up capability is impressive, with the lens boasting a minimum focus of just 15cm at wideangle, which turns out to be a matter of millimetres away from the front element. Perhaps more practically, it’s still capable of focusing on an image area of around 82mm x 62mm when set to the 100mm position, giving a magnification equivalent to 0.42x on full-frame. A petal-type lens hood is included in the box, with a locking button to hold it in place, and the lens accepts 72mm filters. 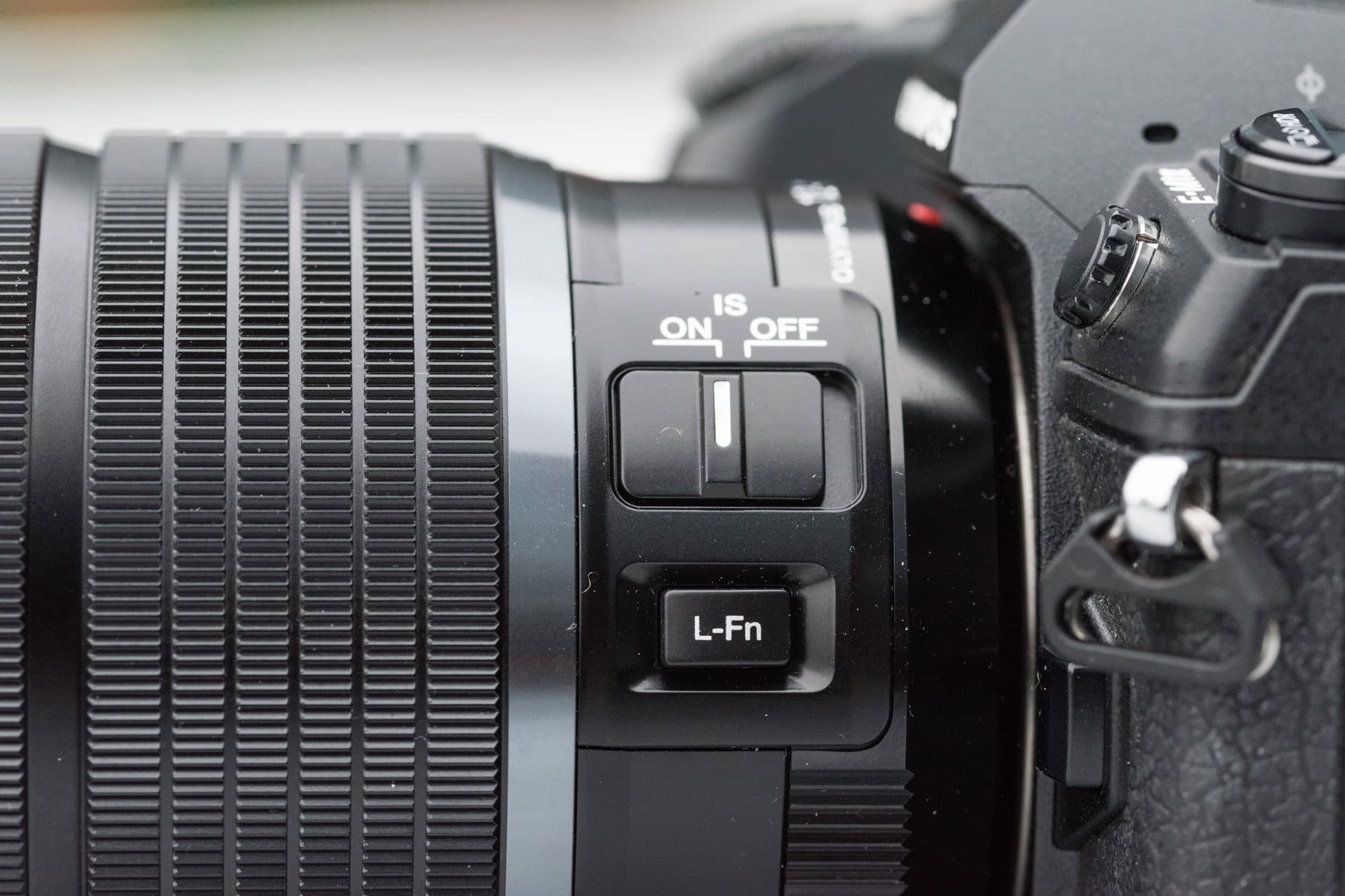 The really big deal, though, is the addition of optical image stabilisation. This is only Olympus’s second lens to include this feature, after its M.Zuiko Digital ED 300mm f/4 IS Pro telephoto; previously the firm has relied solely on in-body stabilisation. It makes the 12-100mm an attractive option not just to Olympus users, but also to owners of older Panasonic cameras that don’t include in-body stabilisation

Crucially, though, the 12-100mm is compatible with Olympus’s Sync IS, in which the lens’s optical stabilisation and the in-body sensor-shift stabilisation work together for increased overall effect. As a result, when used on the flagship OM-D E-M1 Mark II mirrorless model, the system is rated to provide an improbable-sounding 6.5 stops of stabilisation, making it the most effective currently available (alongside Panasonic’s Dual IS in the Lumix DC-G9). With older OM-D and PEN cameras, however, the stabilisation won’t be quite so marked.

The 12-100mm is built to essentially the same pattern as Olympus’s other top-end Pro lenses, with a tough metal barrel that’s sealed against dust and moisture. Cosmetically it’s somewhat fussier than the current fashion for streamlined, minimalist design typified by the likes of Zeiss, with finely textured zoom and focus rings, and accented rings around the barrel in gunmetal and blue. A couple of ridged barrel sections next to the mount provide extra grip for mounting and removing the lens. 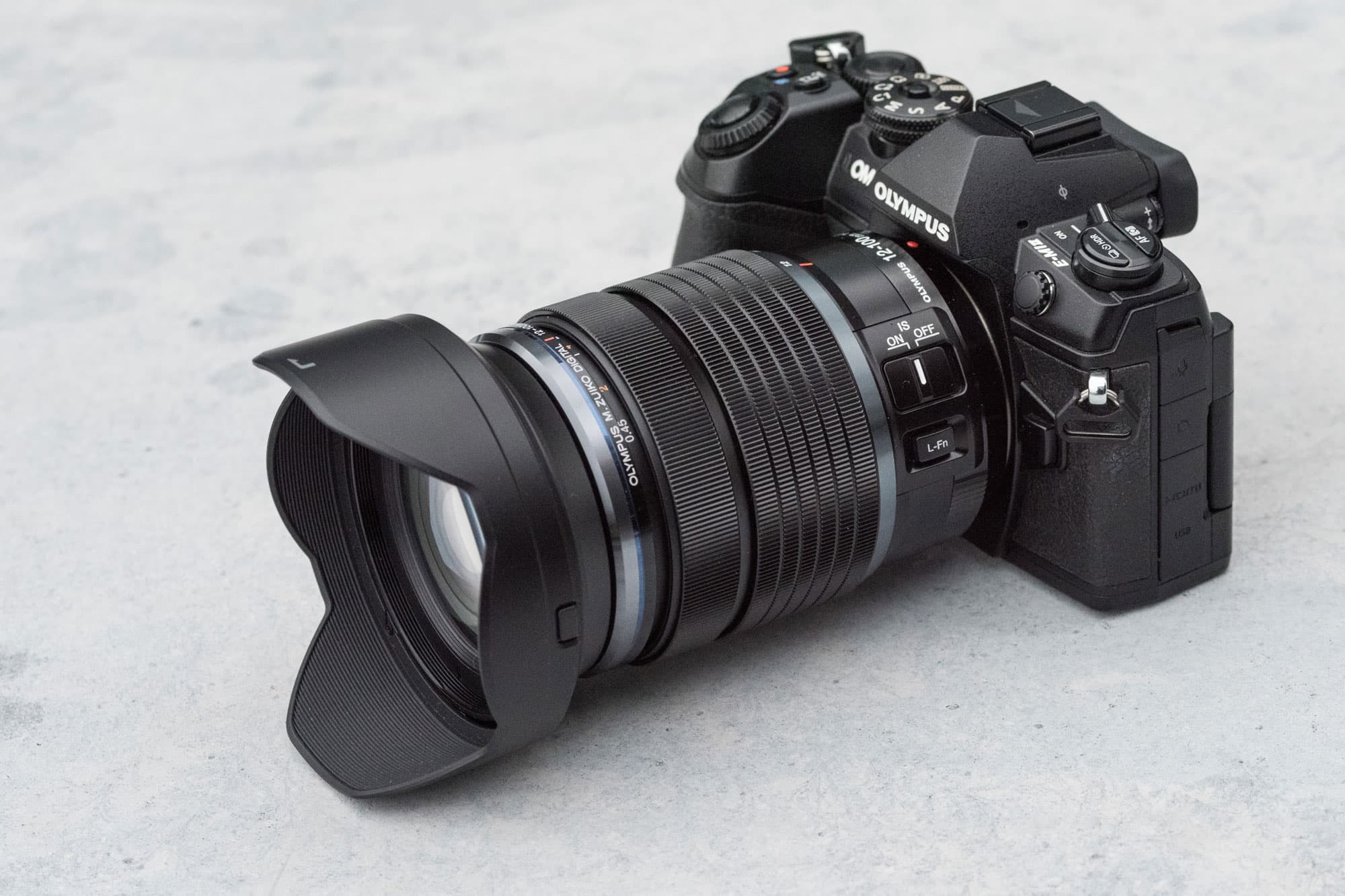 At 77.5mm in diameter, 116.5 long and 561g in weight, this is one of the largest lenses in the Micro Four Thirds system, surpassed only by a few premium telephotos. It’s a good fit to high-end bodies such as the E-M1 Mark II or Panasonic G9, but on smaller cameras it can feel somewhat front-heavy, if not excessively unwieldy. On my E-M5 Mark II, I prefer to use it with the add-on ECG-2 handgrip. 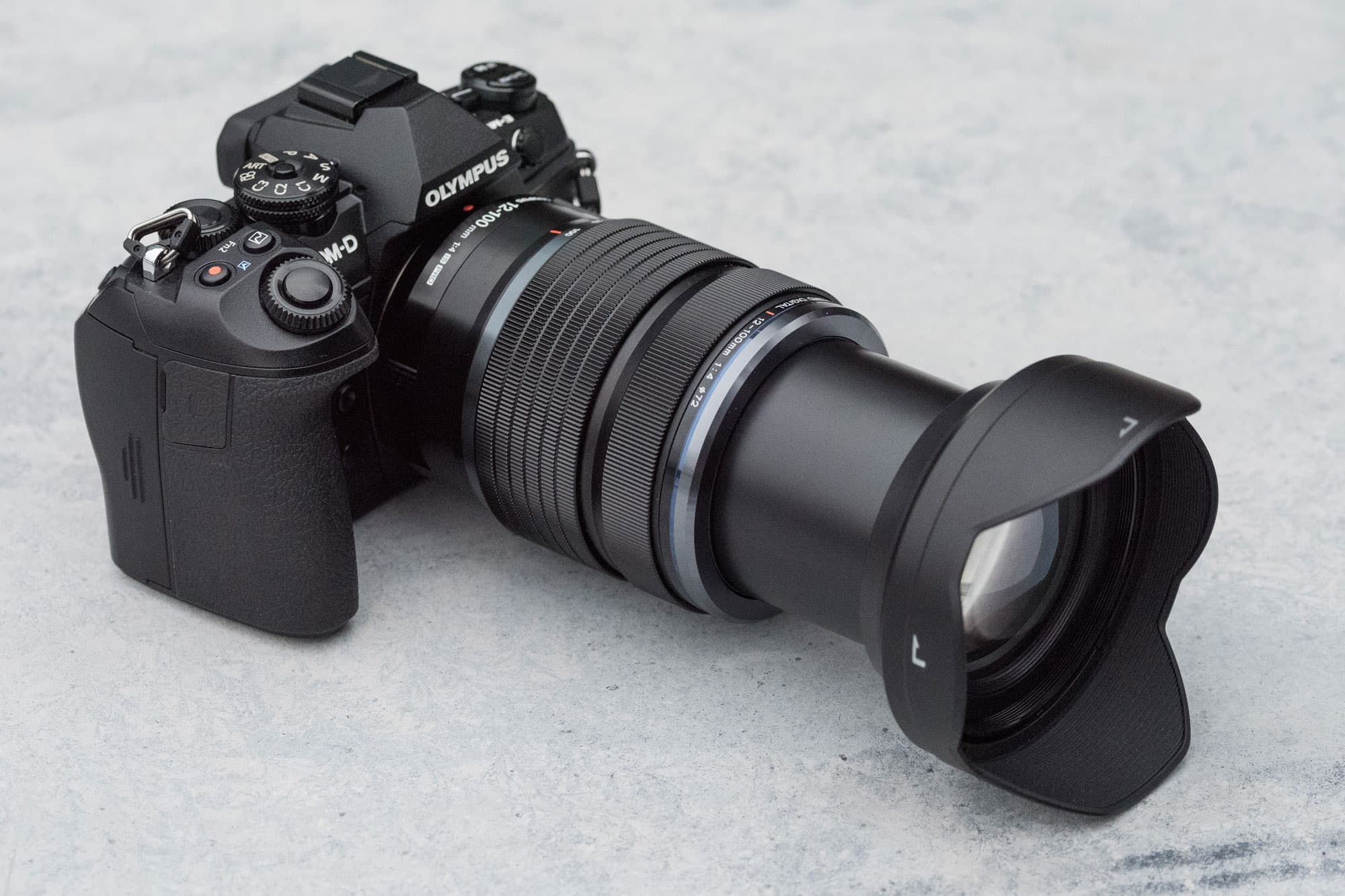 The centrally-positioned zoom ring falls perfectly to hand, and rotates smoothly through approximately 90 degrees from one end of the range to the other. In front of it is the dual-mode manual-focus ring; more on this later. One the side of the barrel is perhaps the largest, easiest-to-use image stabilisation switch I’ve seen; potentially confusingly, this controls both the in-lens and in-body IS systems simultaneously, so setting it to Off disables both. Below it a customisable L.Fn button, which by default interrupts autofocus but can be reconfigured from the camera’s menus to operate other functions such as depth-of-field preview. There’s no zoom lock switch, but that’s not a problem, as the lens simply doesn’t need one.

When it comes to autofocus, the 12-100mm is extremely capable. With static subjects, it focuses quickly, accurately and silently, regardless of the focus distance, or where in the frame you choose to place the subject. Likewise with continuous autofocus, I found the lens to be capable of keeping up with whatever the E-M1 Mark II asked of it during my testing, quite happily holding focus on moving subjects at 10fps or faster. 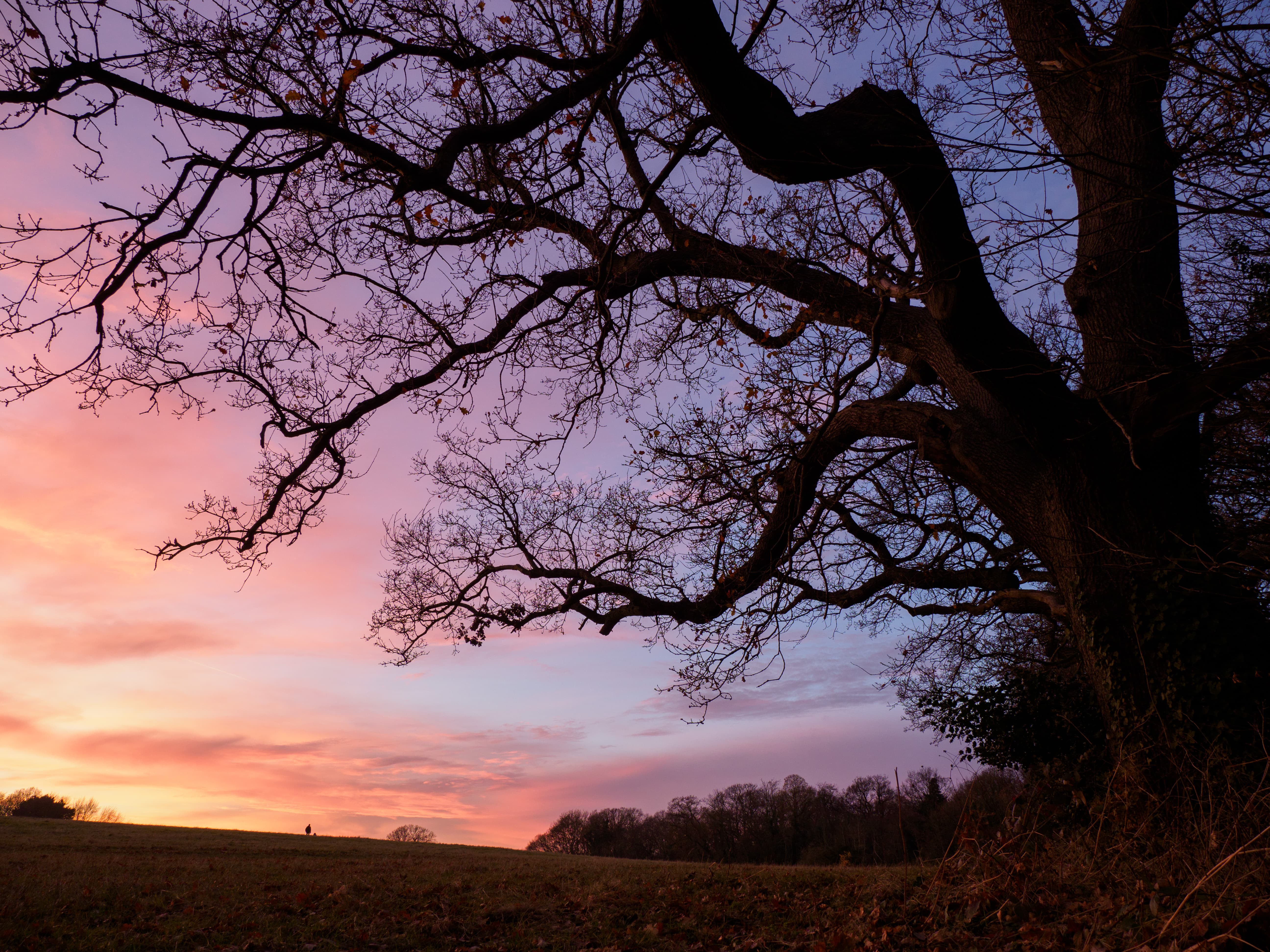 For manual focusing, the lens is equally well behaved. Like Olympus’s other Pro lenses, pulling the focus ring back towards the camera enters manual focus mode, revealing a distance scale that’s marked in feet and meters, and with hard end stops to its travel. Alternatively if you switch the camera body to MF mode, the focus ring can operate in a conventional focus-by-wire mode, which I found to offer finer adjustment of focus should you need it. The lens behaves as though it’s parfocal, in other words the focus distance doesn’t change as you zoom; close observation reveals that this is achieved by the lens automatically adjusting the position of the focus group.

So how does the lens perform in real world use? This is where things get interesting, because the 12-100mm F4 IS gives unusually fine image quality for a long-range zoom. Coupled with its implausibly effective image stabilisation, this turns it into a unique, and really useful photographic tool. 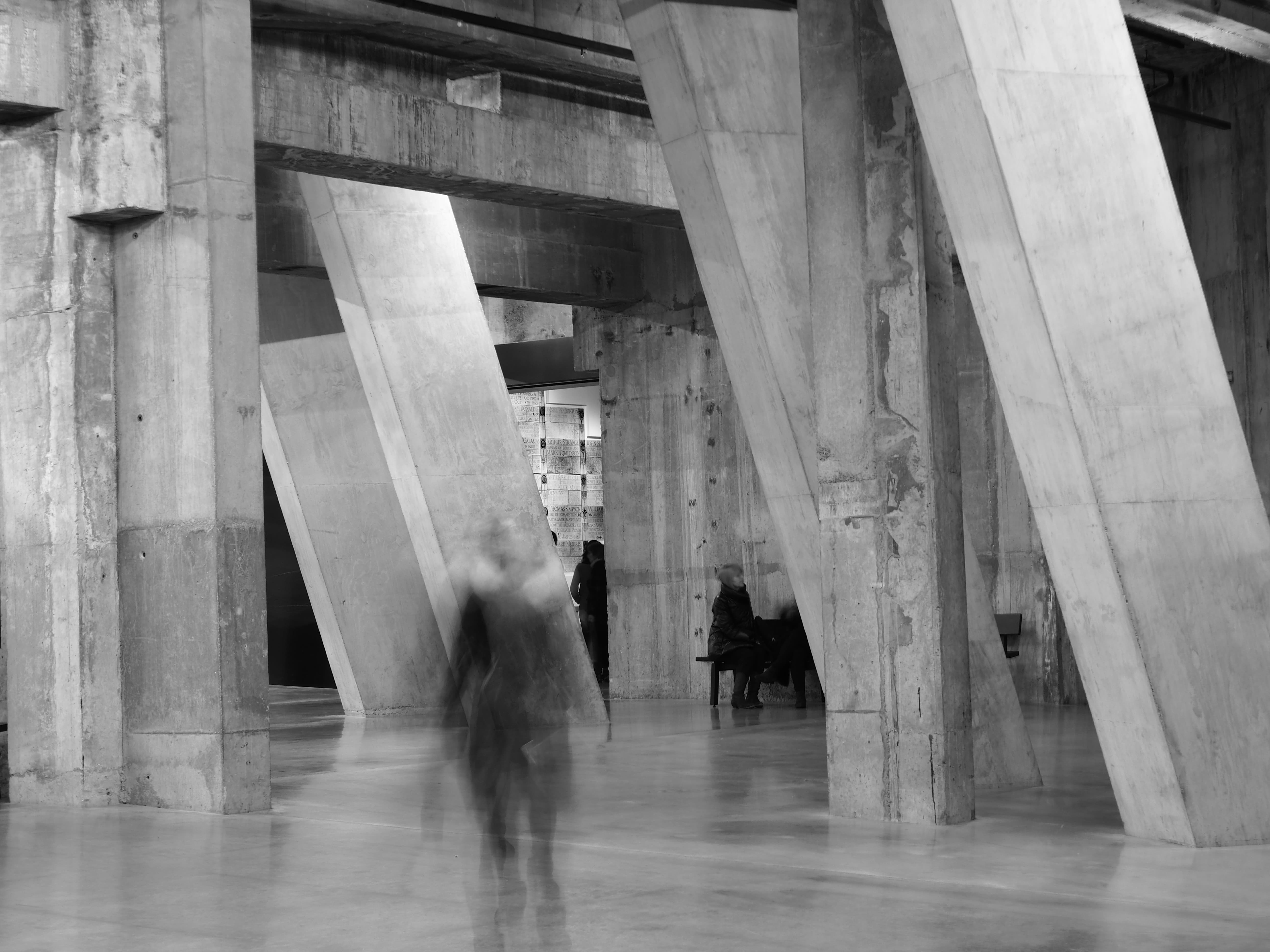 Optically, it’s exceptionally well behaved. It’s impressively sharp across the frame at all focal lengths, with just a little smearing in the extreme corners at the wideangle setting. It’s pretty much at its sharpest wide open, but I’d avoid using apertures much smaller than f/8 due to diffraction softening. Impressively, it’s pretty much as sharp at its minimum focus distance as it is for more distant subjects. 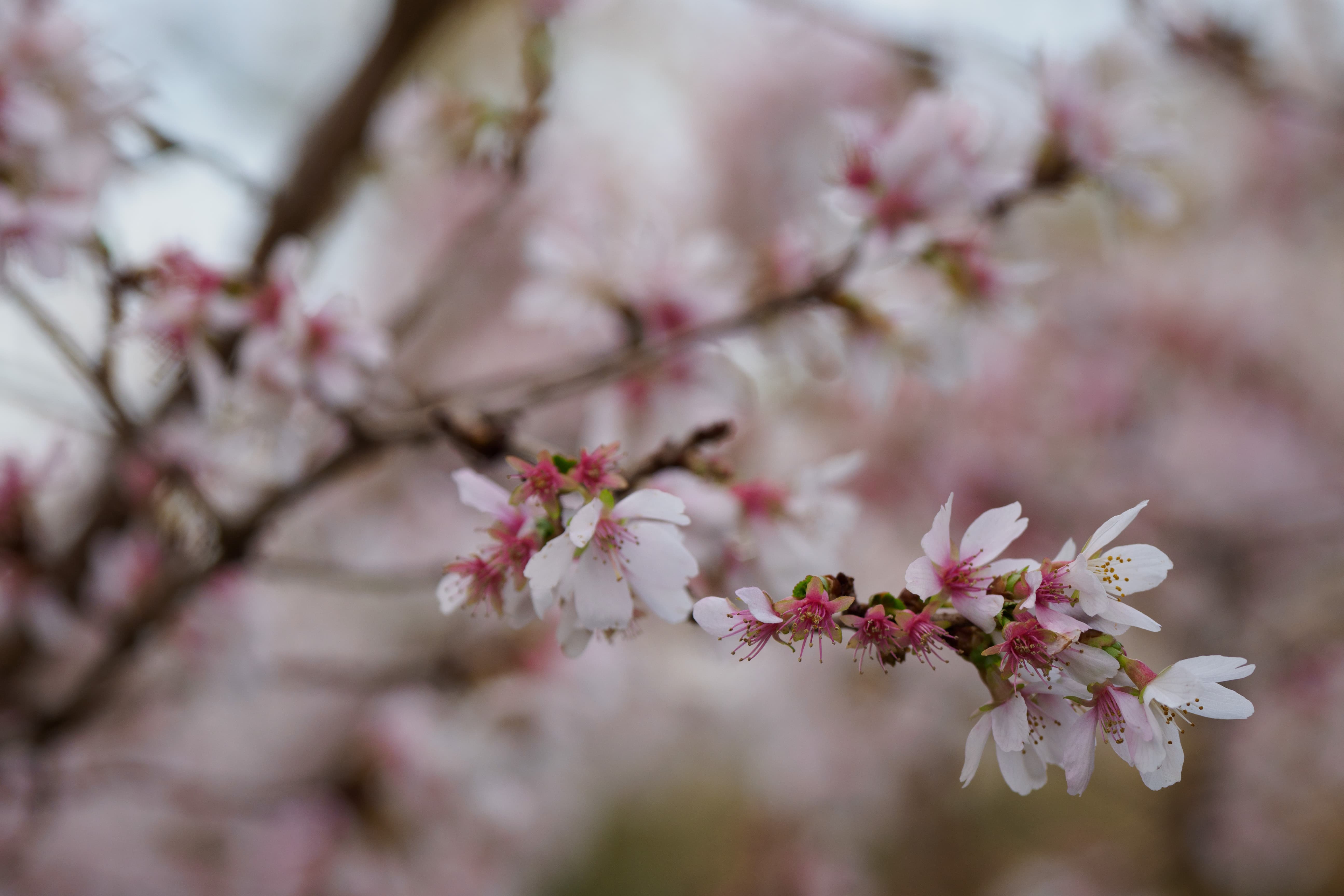 As usual with Micro Four Thirds, chromatic aberration and distortion are both automatically corrected in software, and as a result you won’t see much hint of either in normal use.. Vignetting is too low to be of any practical consequence. 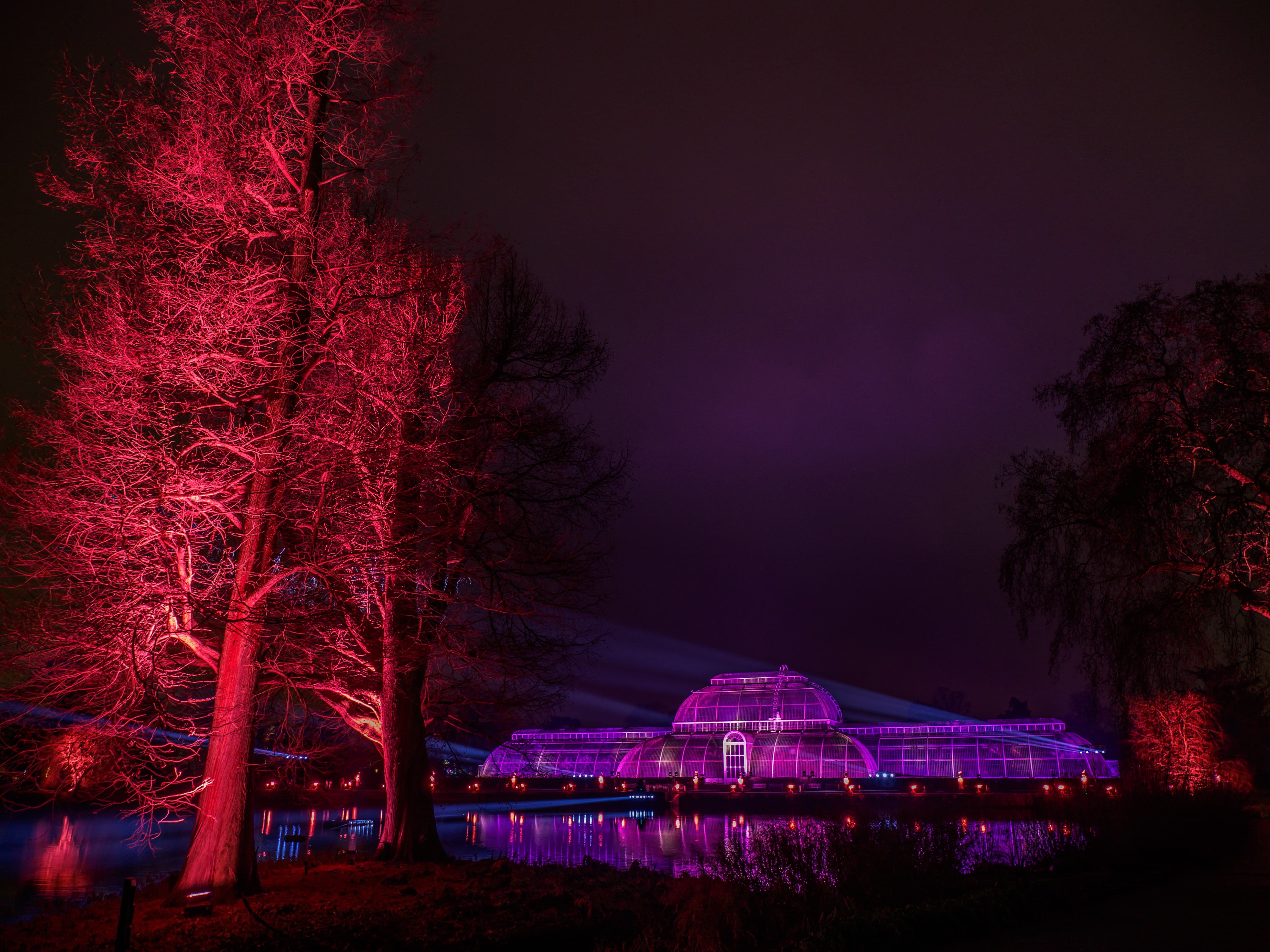 With its f/4 maximum aperture, this lens isn’t going to be your first choice for shooting with shallow depth of field: it’ll give similar results to using f/5.6 on APS-C, or f/8 on full-frame in this respect. But you can still get some attractively blurred backgrounds, particularly when shooting close-ups and towards the long end of the zoom. 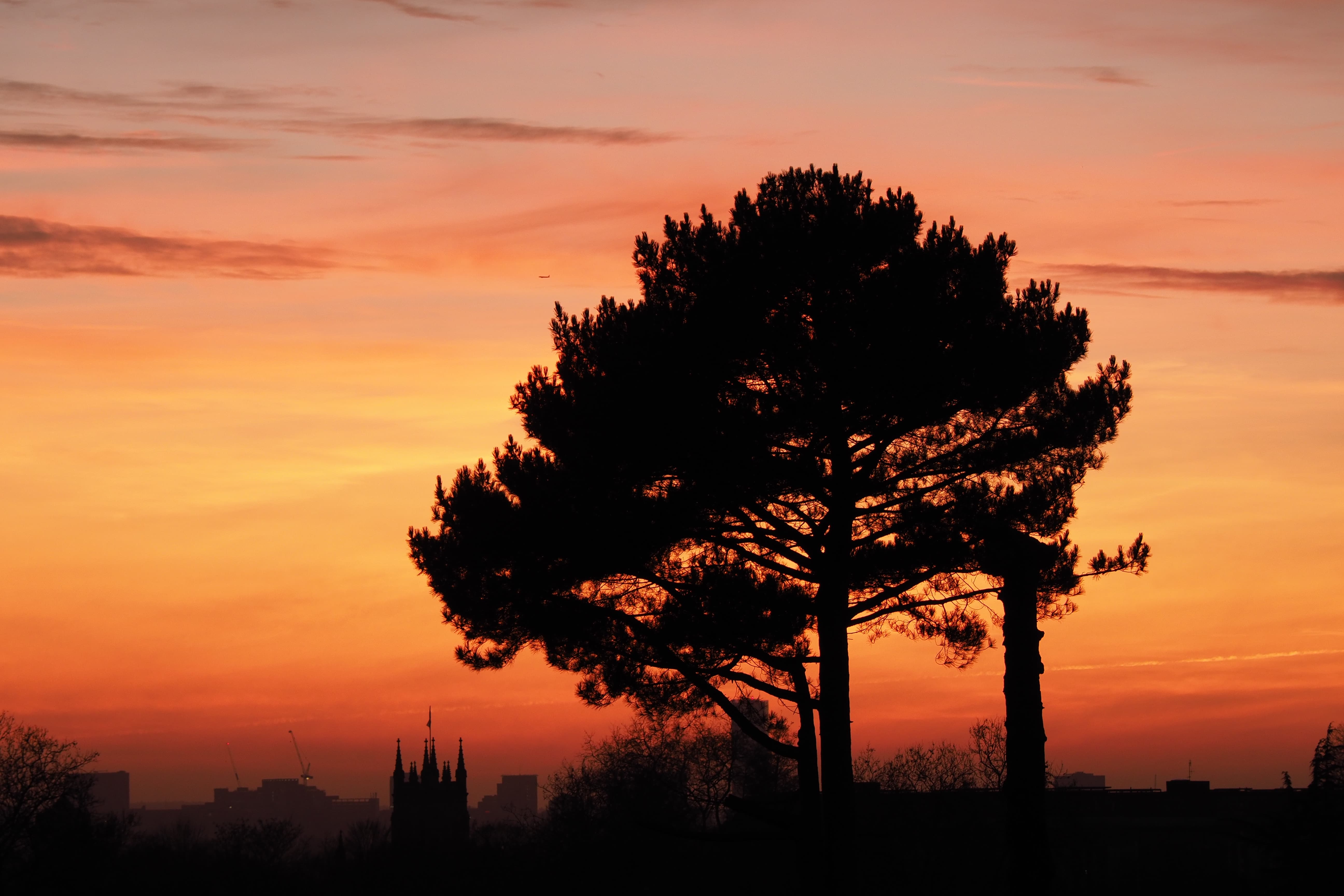 It’s the image stabilisation, though, sets the 12-100mm apart, at least when used on current Olympus bodies. With other IS systems I wouldn’t usually expect to get sharp images at shutter speeds longer than 0.5 seconds; with this one I’ve shot hand-held at speeds as long as 4 seconds and got perfectly usable results. This does demand optimum shooting conditions and good technique, including holding the camera to your eye rather than composing with the LCD, but incredibly, it really works. Crucially it means that when shooting static subjects in low light, you can continue to use low ISOs where you’d have to raise the sensitivity considerably on other cameras. This in turn means that despite the camera’s smaller sensor, you can get at least as good, or better overall image quality. 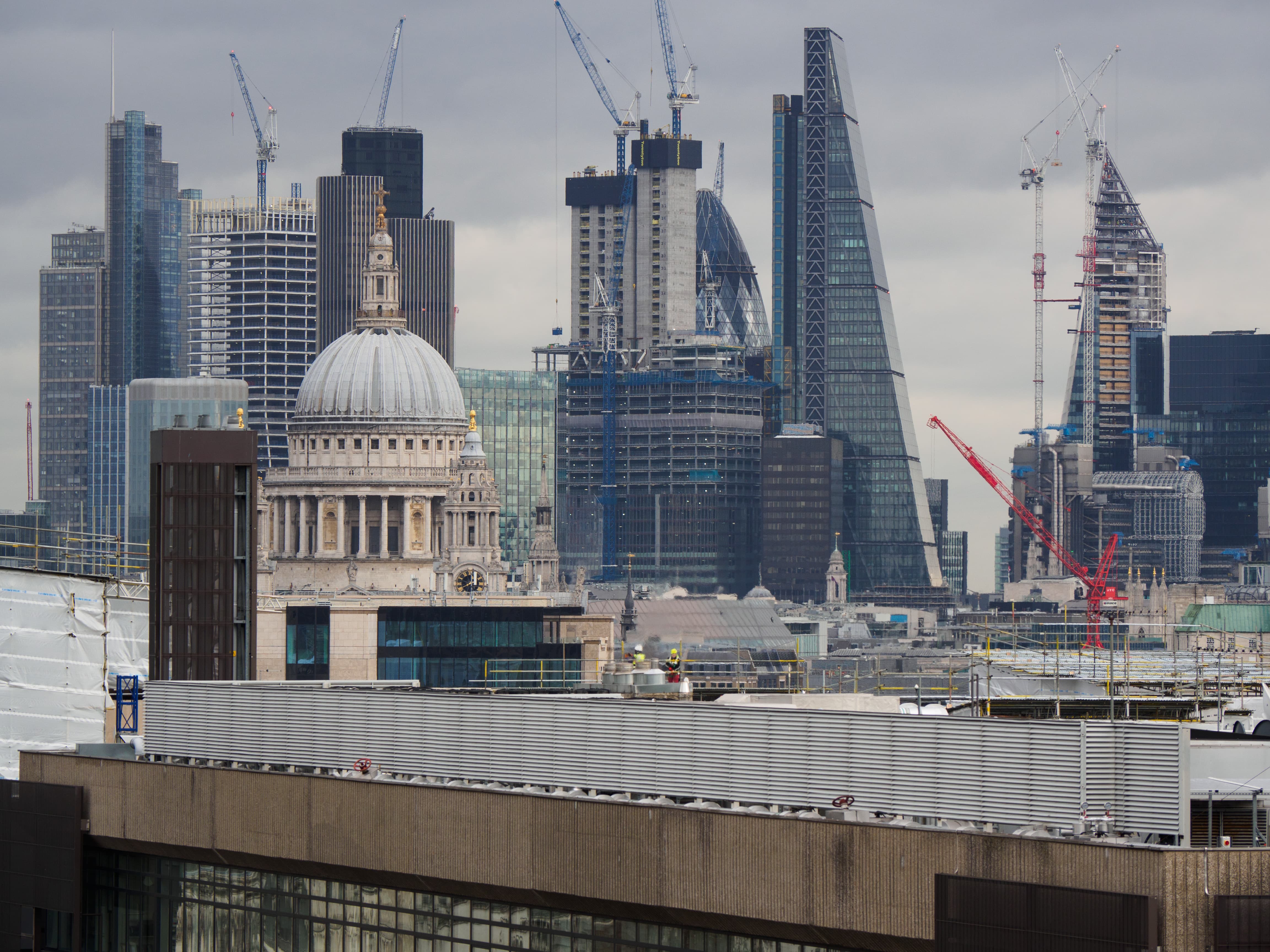 Like most superzooms the 12-100mm is sharpest in the image centre at wideangle, as confirmed by our Applied Imaging MTF50 tests. It gets progressively softer as you zoom in, but not to a troublesome degree. It’s also much sharper in the corners than lesser-quality high-ratio zooms, especially at longer focal lengths. In general, best results are obtained at f/4-5.6. 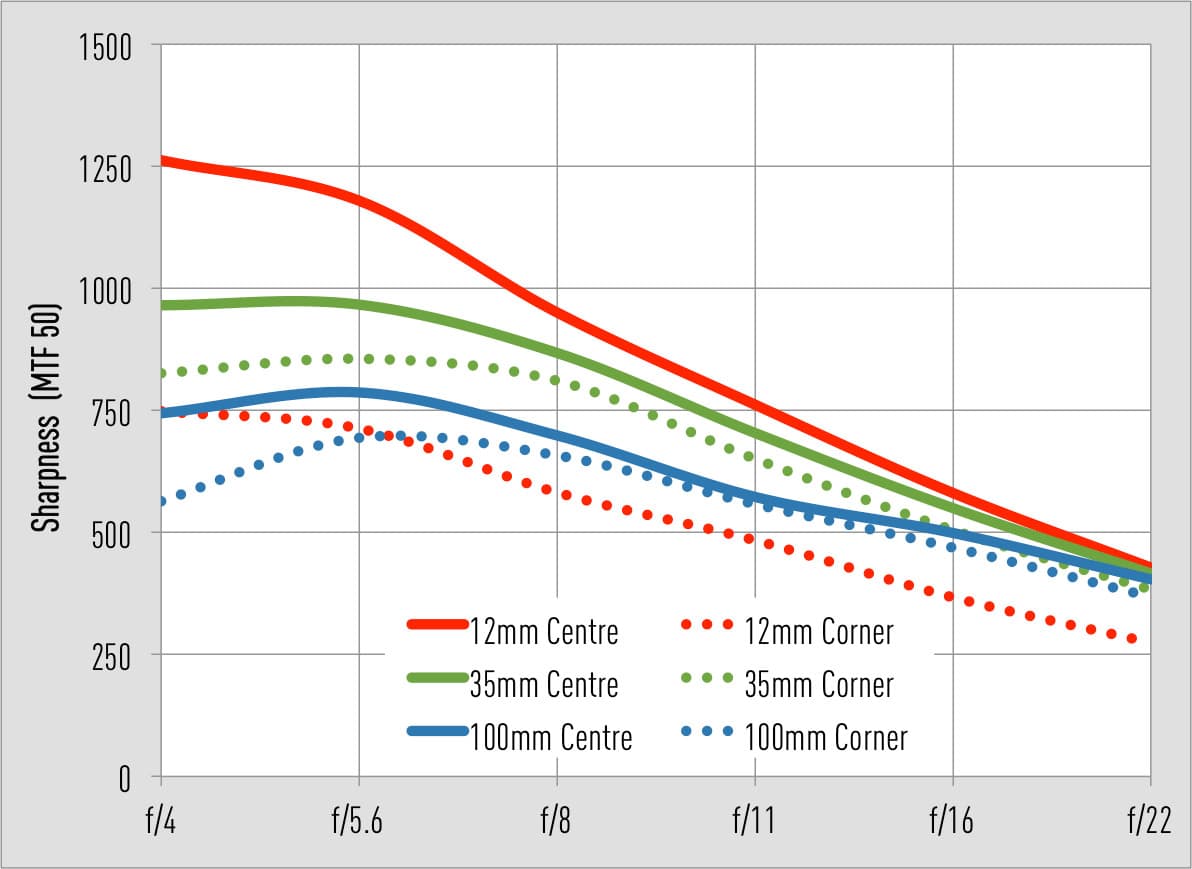 Smaller sensor formats usually suffer less from vignetting, and that’s exactly what we get here. At first sight things might look bad, with a precipitous drop-off into the corners, but it’s the numbers that matter and at less than 0.7 stops, vignetting is barely visible in real-world use. Closing the aperture down a stop eliminates the effect, too. 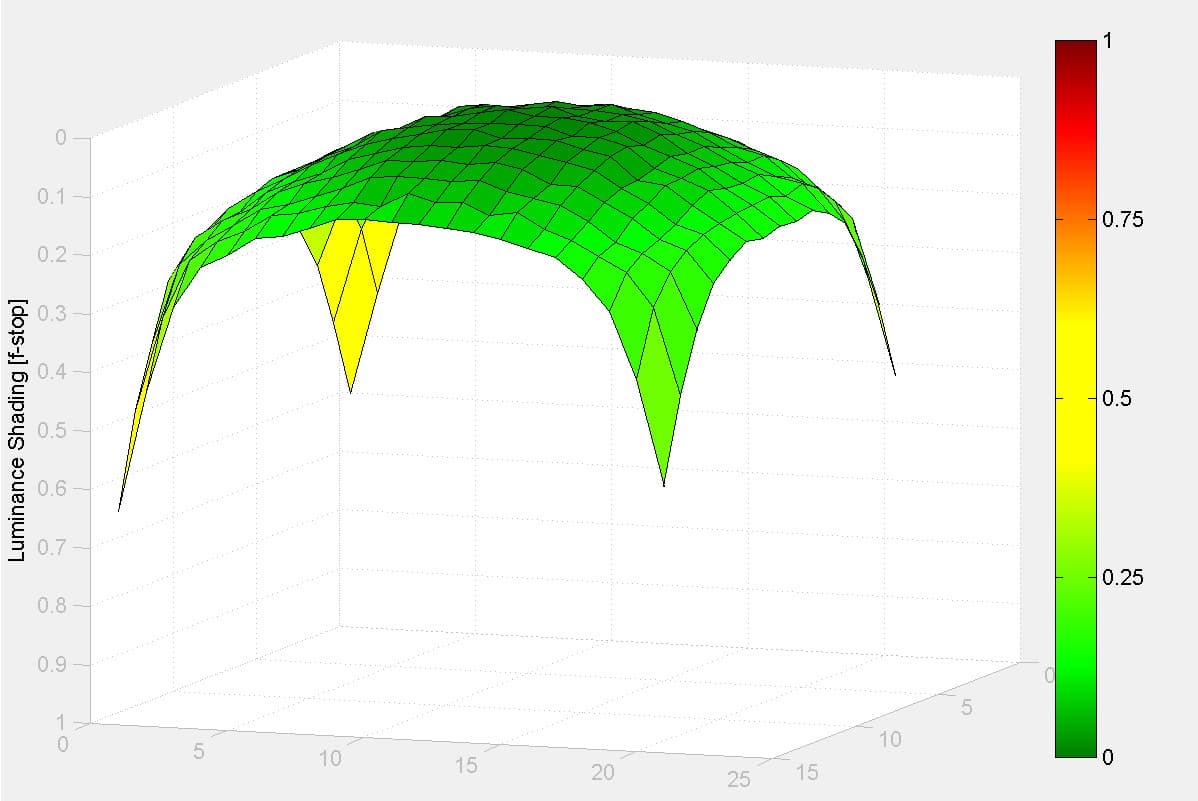 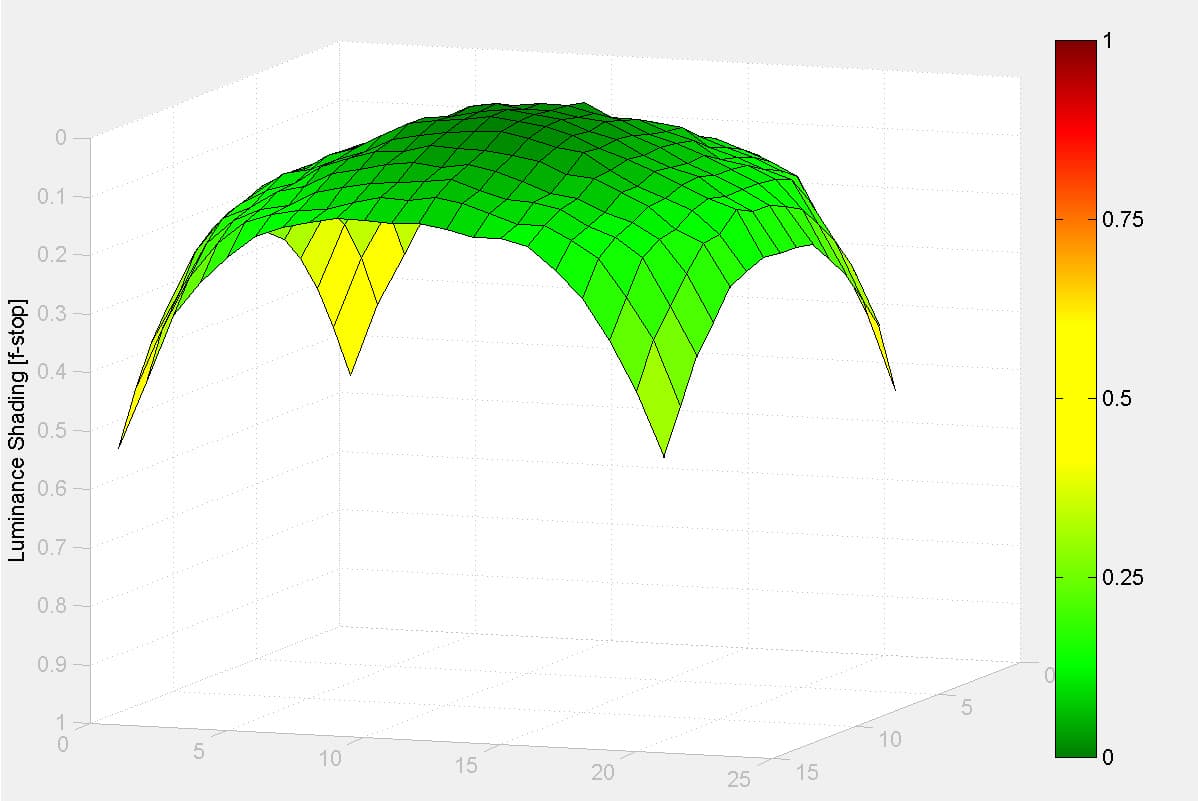 With software correction automatically applied at every stage in Micro Four Thirds, the vast majority of users won’t see all that much evidence of distortion at all. If you go out of your way to break the system, you can find an underlying distortion pattern of barrel-type at wideangle, and pincushion at telephoto. But it’s really only of academic interest. 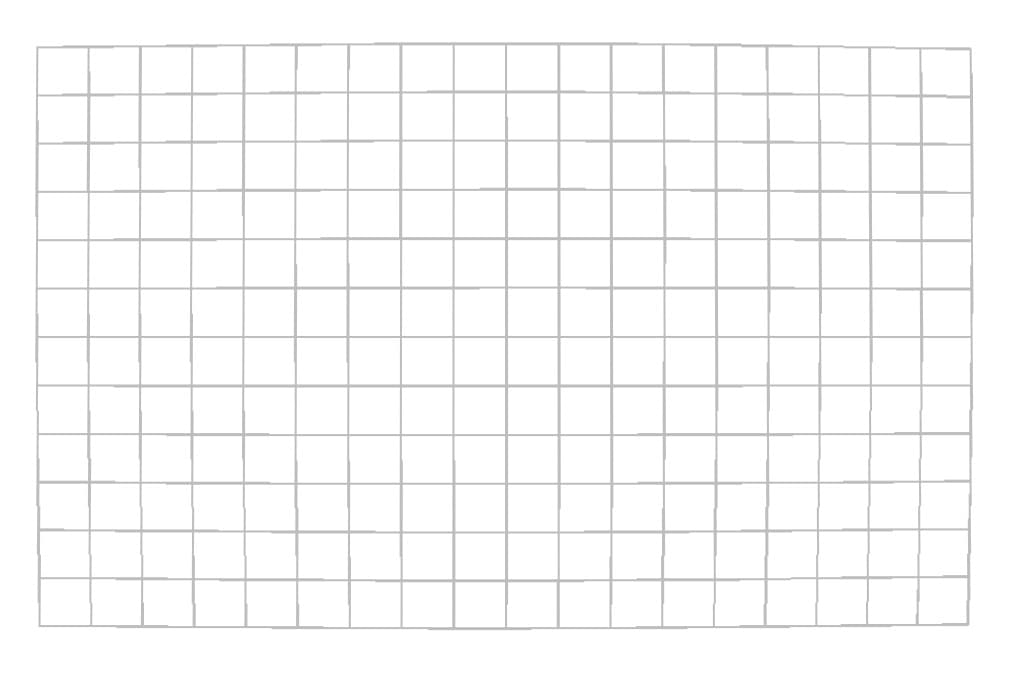 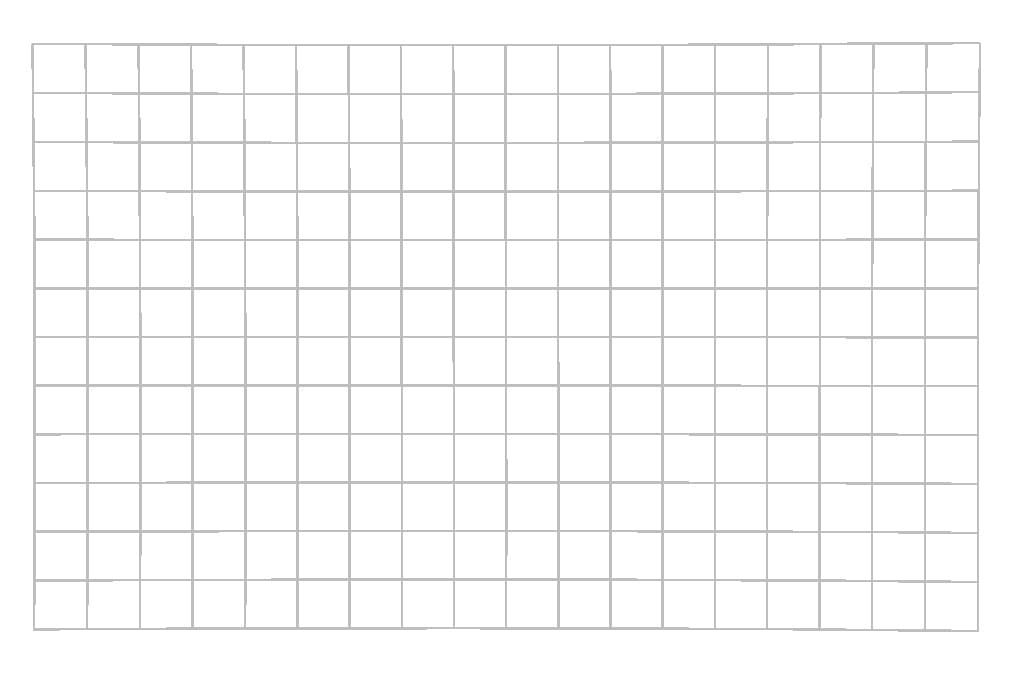 I’ve always liked the idea of superzoom lenses; I tend to shoot quite a lot at both wideangle and telephoto, and it’s great to be able to do so without swapping lenses all the time. But previously, I haven’t found one that quite makes the grade with respect to image quality. However Olympus has changed all that with the 12-100mm F4 IS. I was really impressed when I first used it while reviewing the E-M1 Mark II, and a year on camea I still can’t believe how good it is. 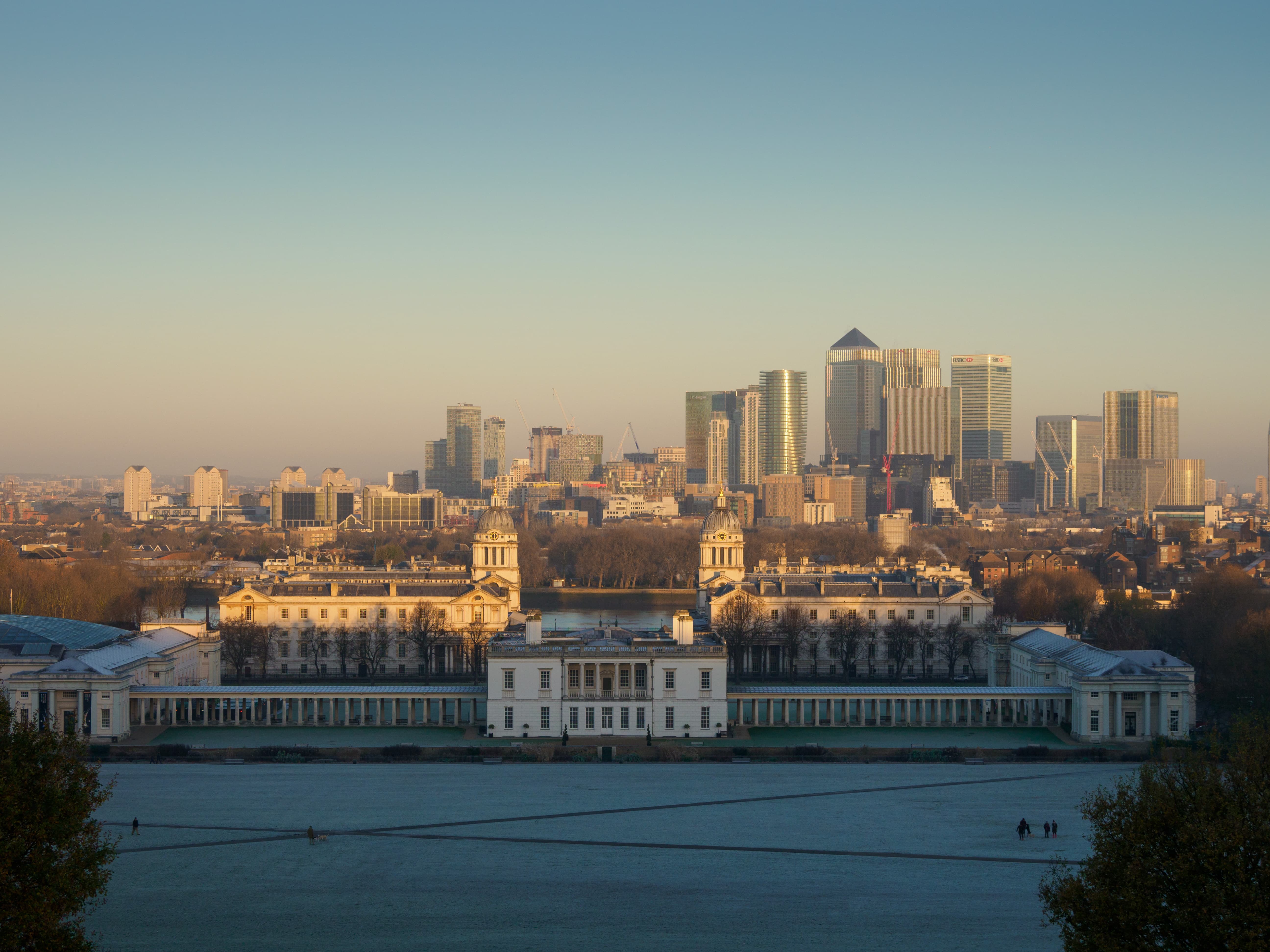 Quite simply, this lens brings an unparalleled combination of high image quality, compositional versatility, robust construction and near-magical image stabilisation. It’s not one to choose for shallow depth of field, but if you want to shoot a wide range of subjects without changing lenses, from sweeping landscapes to close-ups, it can do all of these with remarkable ease. It’s an outdoor photographer’s dream.

Of course, many buyers will balk at the idea of paying a four-figure sum for a superzoom. But this one really can do it all unexpectedly well, and potentially replace a two or three other lenses in your bag. It’s a great addition to any Micro Four Thirds shooter’s arsenal. 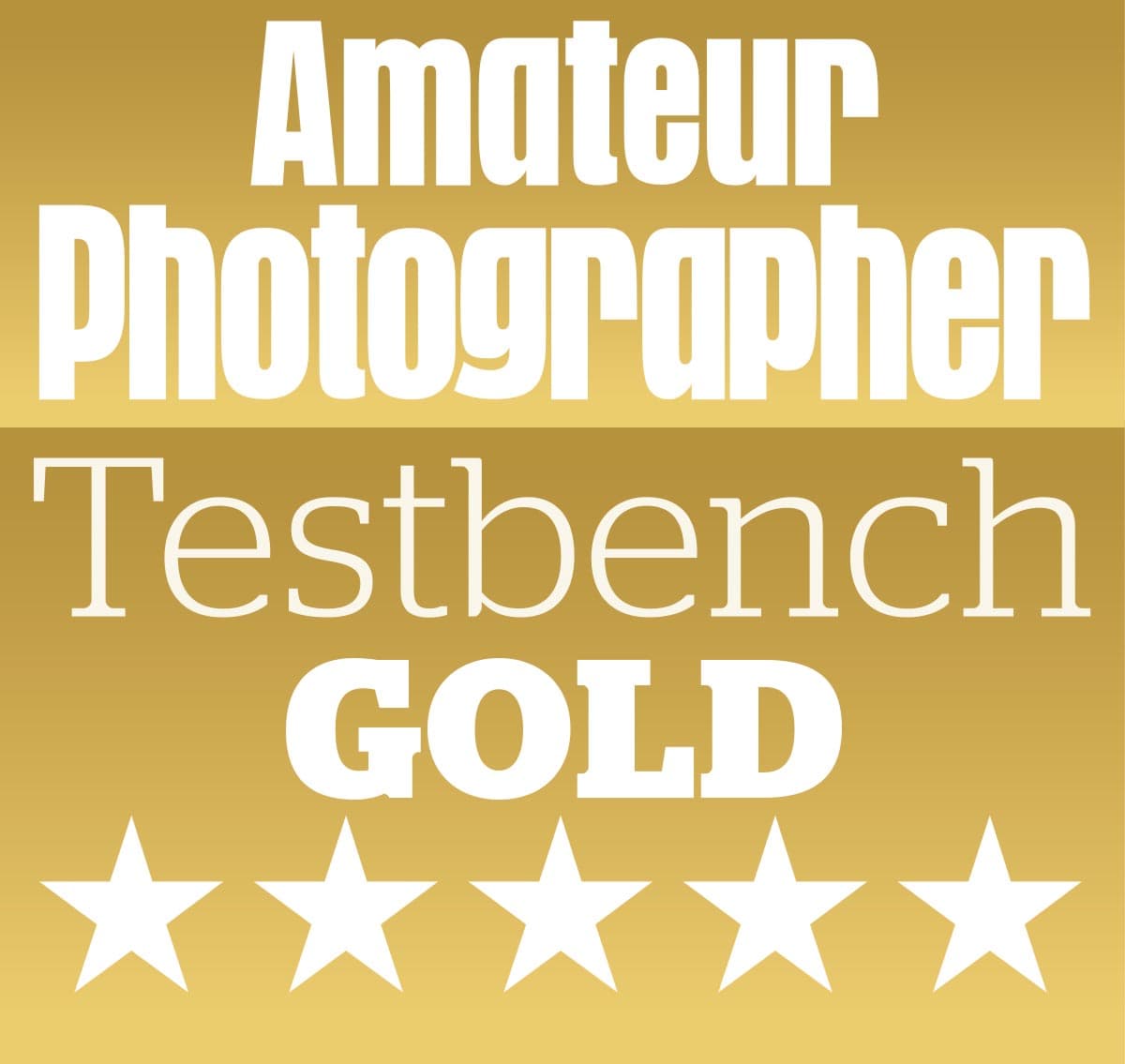 For more options, have a look at our guide to the best Micro Four Thirds lenses. 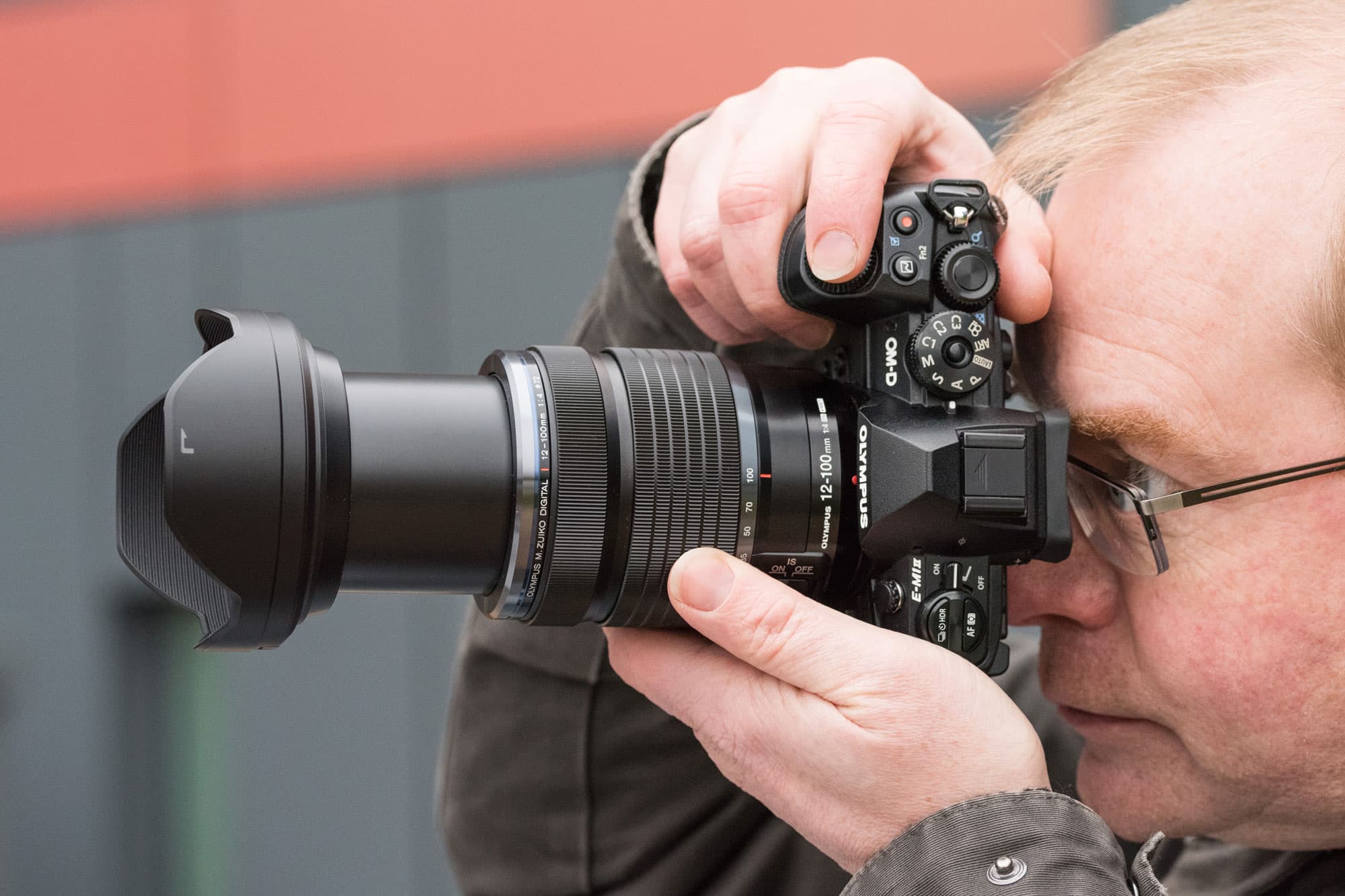