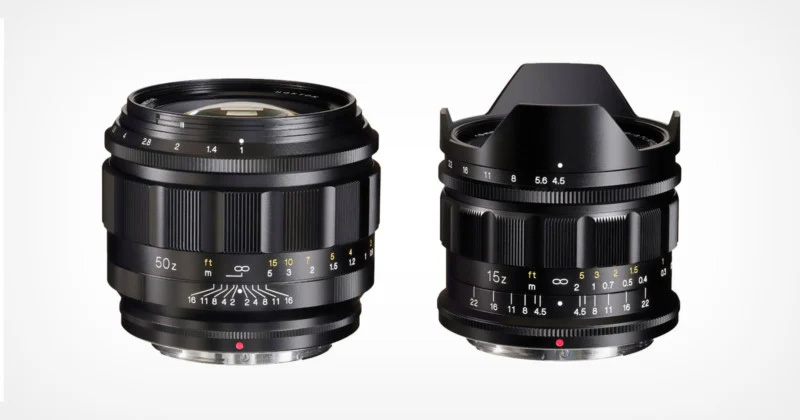 Cosina has announced the new Voigtlander 75mm F1.9 Ultron VM lens, an M-mount lens which is available in SC and MC versions. The Z-mount versions of their Voigtlander 15mm F4.5 E-mount lens and the NOKTON 50mm F1.0 M-mount lenses were also announced.

Inheriting the lens configuration displays extremely low distortion and sharp images right to the periphery of the frame, despite its super-wide angle of view. (110° diagonal.)

The lens also has an optical design that optimizes the angle of incident light rays to prevent color fringing caused by the structure of digital image sensors. The minimum focusing distance is very close at 12.6cm (0.25 magnification.)

A 58mm filter can be attached without the need for a special adapter as the metal hood can be simply removed using a flat-head screwdriver. This makes it possible to use filter holder systems using square and rectangular filters, often used in landscape and architectural photography.

The NOKTON 50mm F1 Aspherical uses a GA (ground aspherical) lens element, manufactured in-house, for the front surface of the lens. This difficult manufacturing process achieves sufficient rendering and superior performance at even the widest aperture. The in-house designed and manufactured GA lens made it possible to use a high melting point and high refraction glass material, which cannot be used with molded lens manufacturing methods.

By adopting a floating lens mechanism, stable image quality can be obtained from the shortest shooting distance to the most distant. Constant sharpness at all subject distances is now achievable. The standard 50mm F1 lens is like a dream for photography enthusiasts. With F1 you can enjoy extremely large and smooth bokeh compared to lenses with slower low F-stop. The minimum focusing distance of this lens is very close at 0.45m.

Due to the 50mm F1’s total of 12 aperture blades, the out-of-focus part of point light sources are depicted in a desirable rendition and shape. It also comes with a metal lens hood that may be mounted in reverse making it both portable and versatile.

The balance between bokeh and resolution has been optimized by deliberately leaving a moderate amount of spherical aberration. While maintaining the clarity of the image areas which are in focus, the out-of-focus area produces a rich and large bokeh effect.

The new but simple construction allows all the elements to move in tandem, resulting in an overall length of only 54.1 mm, which is extremely compact for a 75mm lens. The lens thus offers excellent portability and also suppresses vignetting in the frame when used on rangefinder cameras. This lens is equipped with a high-precision rangefinder-coupled mechanism, and the full-metal helicoid ring provides a silky smooth luxurious focus.

The lens is available in two coatings: multi (MC) and single (SC). The barrel finish is either matte black paint for a modern look for the MC or a black paint finish for more classical tastes on SC.

All models include a metal screw-in hood and metal hood cap to match each finish.

Isabella Ruffatti studied Journalism with Creative Writing at Kingston University, where she took up photojournalism and street photography and graduated in 2020. She is responsible for writing content for the magazine and online.