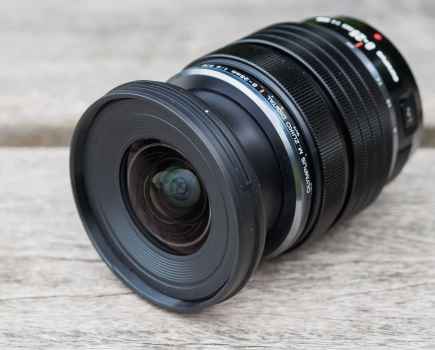 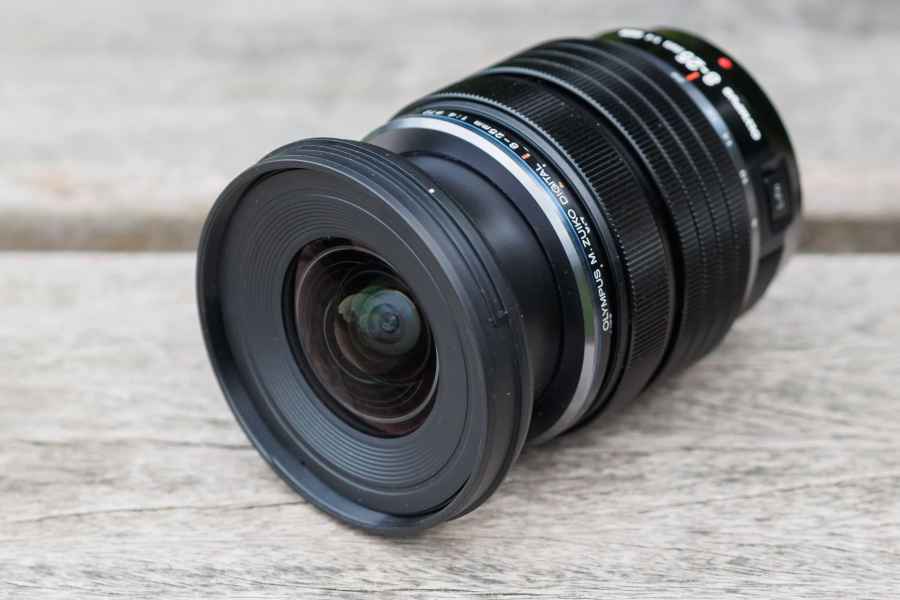 This latest Olympus wideangle zoom has been a while coming. It’s been on the firm’s roadmap for a couple of years and was officially named as an 8-25mm f/4 in July 2020. Since then, Olympus’s imaging division has split off into a separate company called OM Digital Solutions, and this is the first new optic released under its stewardship. 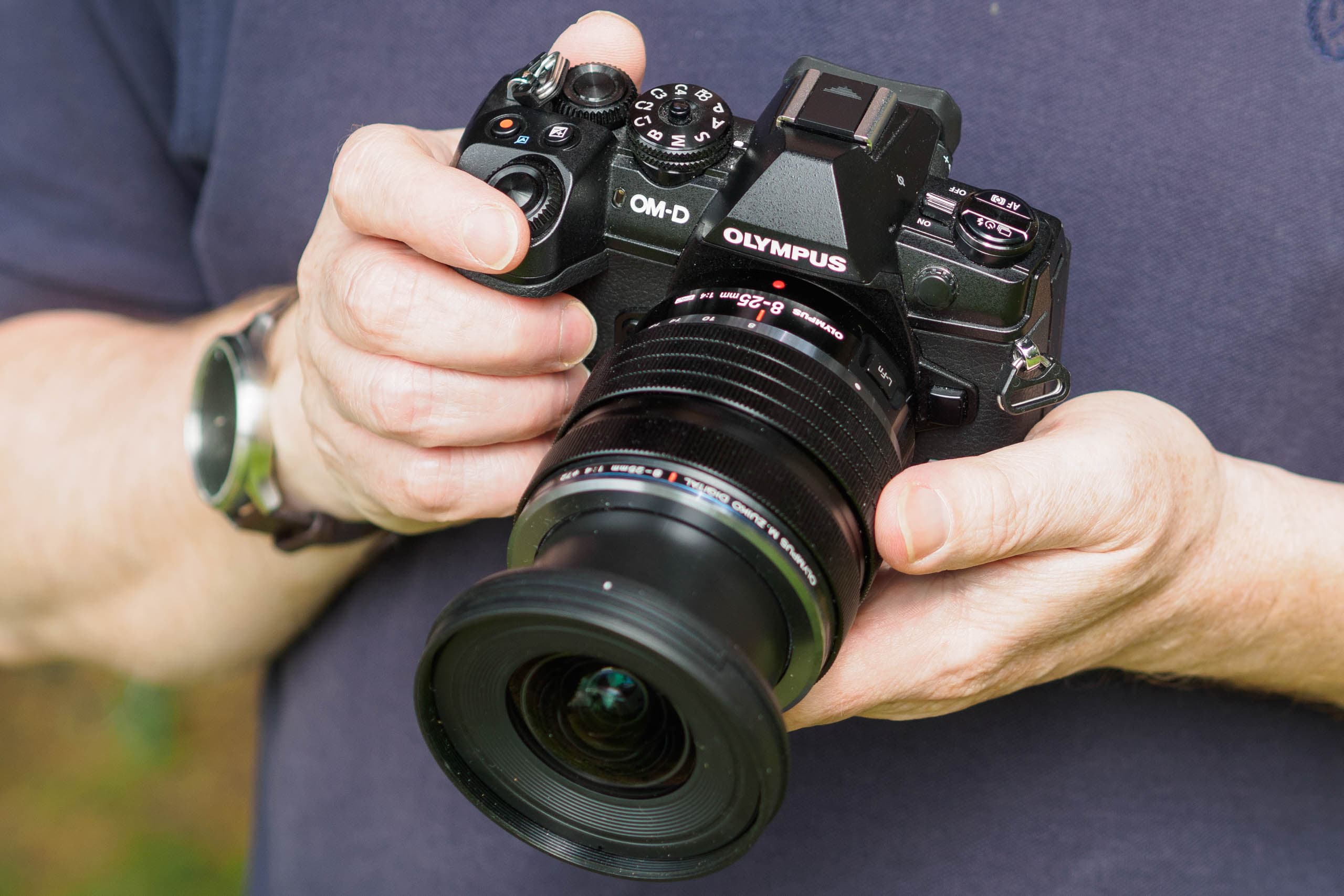 As indicated by its Pro label and £899 price tag, this is a premium lens for users of Olympus’s Micro Four Thirds cameras, although it can also be used with Panasonic’s Lumix G-series bodies. It’s jostling for attention in a system that’s already blessed with some excellent high-end offerings: Olympus makes a 7-14mm f/2.8 Pro while Panasonic offers a premium, Leica-badged 8-18mm f/2.8-4 (both firms also make smaller, less expensive alternatives). The 8-25mm f/4 is similar in size and price to the latter, so many photographers will be making a direct choice between the two. 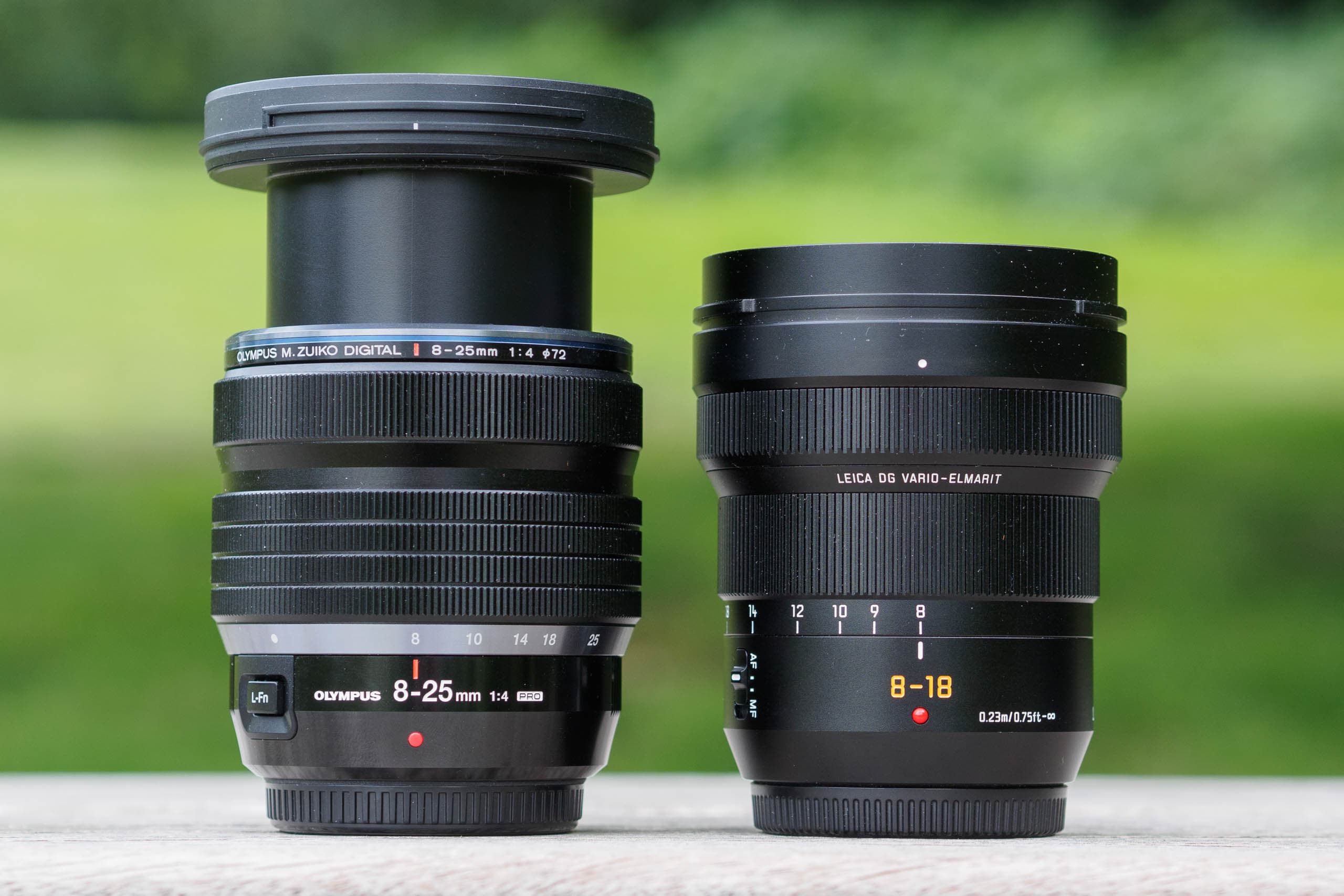 So what does the 8-25mm bring to the party? Firstly, unlike the 7-14mm f/2.8 Pro, it accepts screw-in filters, which makes it a much more practical choice for landscapes. Secondly, it extends the long end of the zoom to an unusual 50mm equivalent, which means it can stay on the camera more of the time, rather than being continually swapped with a standard zoom. What’s more, it offers impressive close-up capabilities. For some landscape and architectural photographers, it might be the perfect everyday lens.

On the whole, the 8-25mm f/4 offers much the same feature set as other Pro-series Olympus lenses. It boasts an IPX-1 rating for dust- and splash-proofing, while also being freezeproof to -10°C. But in a first for the range, it employs a space-saving retractable design; twisting the zoom ring past the 8mm position reduces the packed length by 25mm. 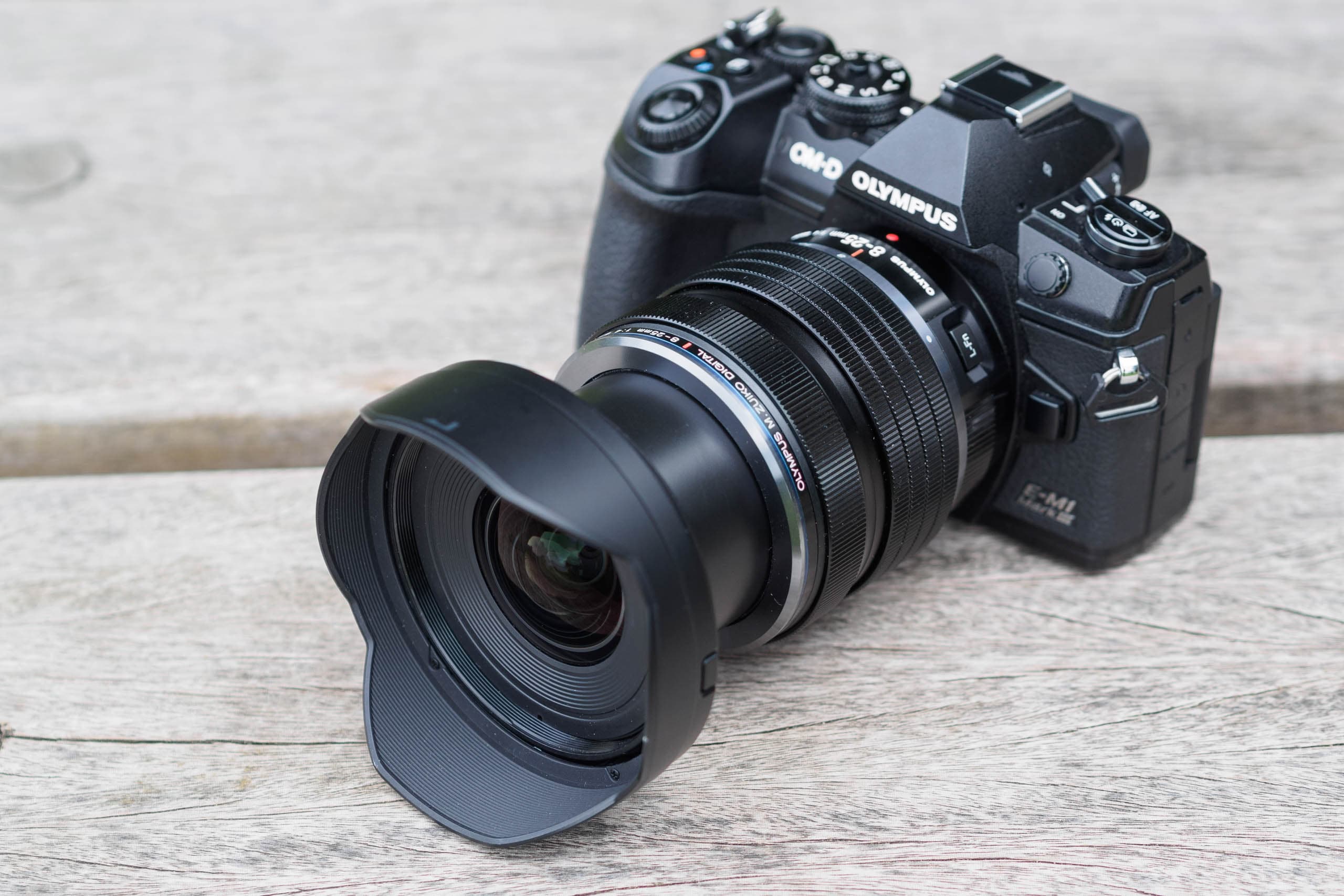 A petal-type bayonet-fit lens hood comes in the box

Olympus has never been afraid of using complex optics, with the 16-element, 10-group formula employing elements made from extra-low dispersion (ED) glass, Super ED glass, high refractive-index (HR) glass and Super HR glass to minimise aberrations. Two aspherical elements made of ED glass and one dual-sided aspheric element promise sharp images into the corners of the frame, while ZERO coating has been applied to suppress flare and ghosting. 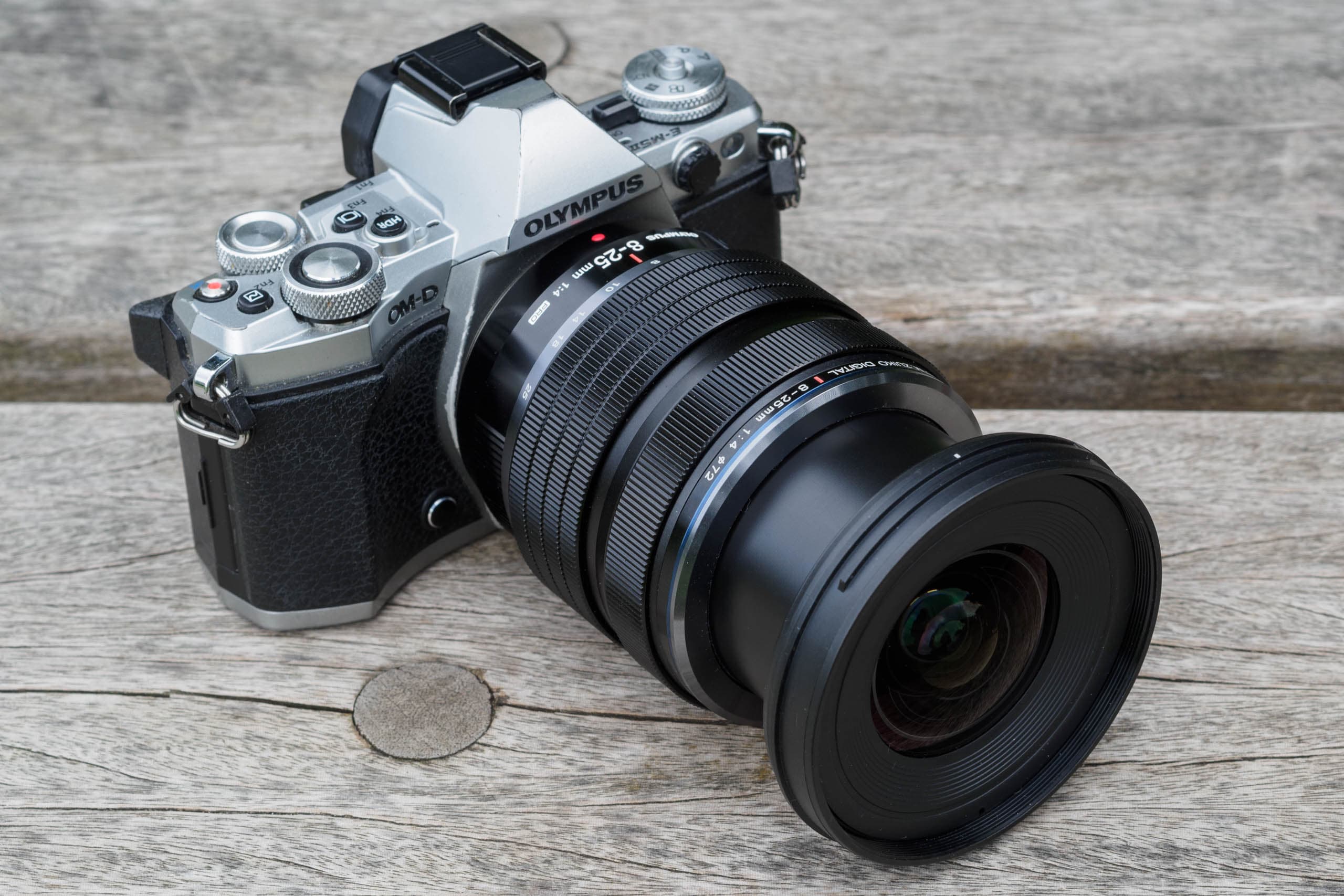 A minimum focus distance of 23cm is available throughout the zoom range, which enables striking wideangle close-ups. Zoom in to 25mm and this equates to a subject size of 83 x 62 mm, or 0.42x equivalent magnification, which is impressive for such a wide lens. A 7-bladed circular aperture diaphragm promises natural-looking background blur. 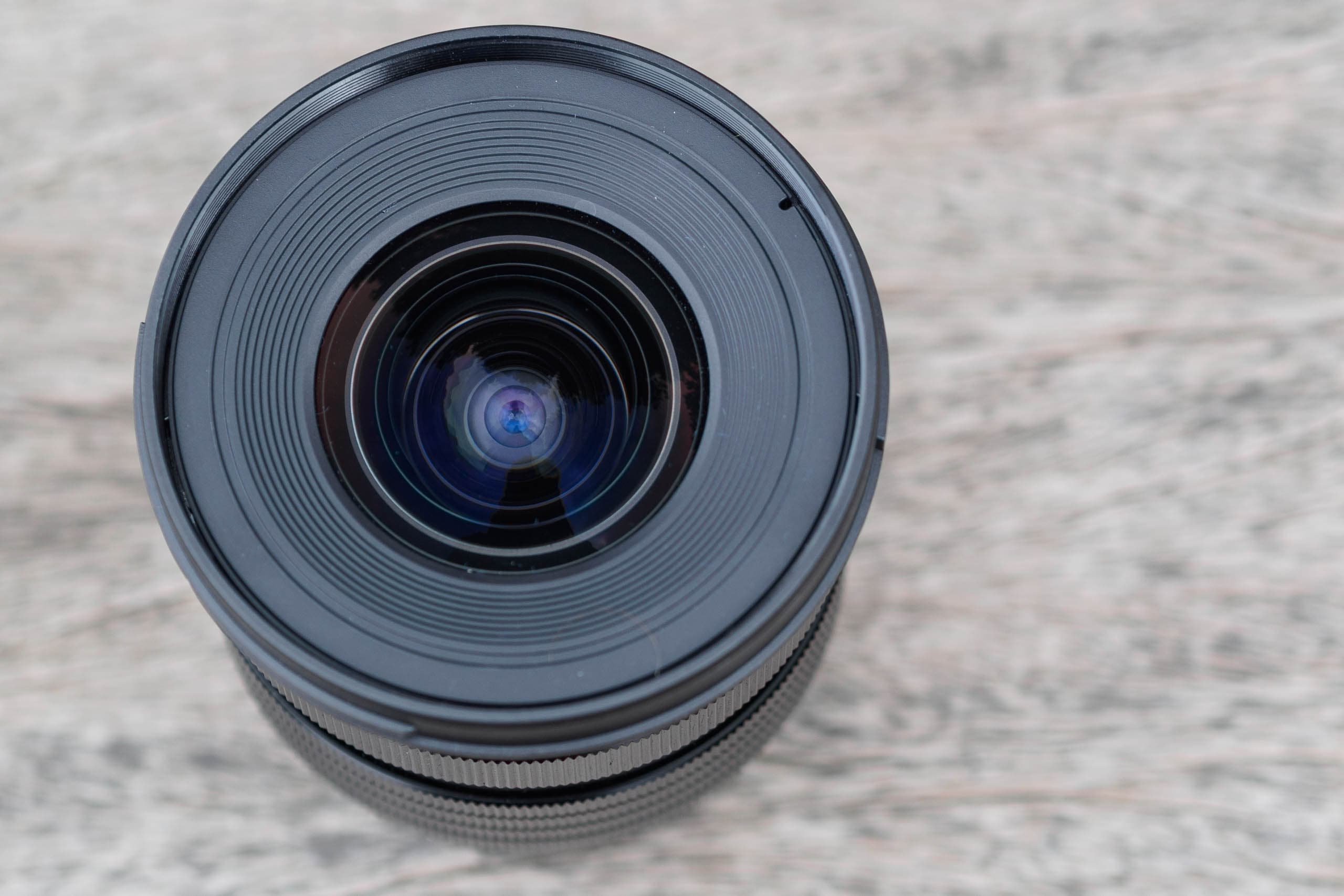 A 72mm thread surrounds the front element, making the 8-25mm a better choice for filter users than the Olympus 7-14mm f/2.8 Pro.

Olympus has used a 72mm filter thread, which is shared with several of its other Pro zooms, including the 12-100mm f/4 and 40-150mm f/2.8. A petal-type hood is supplied, which can be reversed for storage and has a locking button to stop it coming off accidentally. Users of the 12-100mm f/4 should be aware that its very similar-looking hood will also fit the 8-25mm, but may cause some vignetting.

When you pick up the 8-25mm, it feels robust and well-made, with a rubber seal around the mount that helps stop dust or water penetrating into the camera. During my testing, it shrugged off a couple of heavy showers without missing a beat. 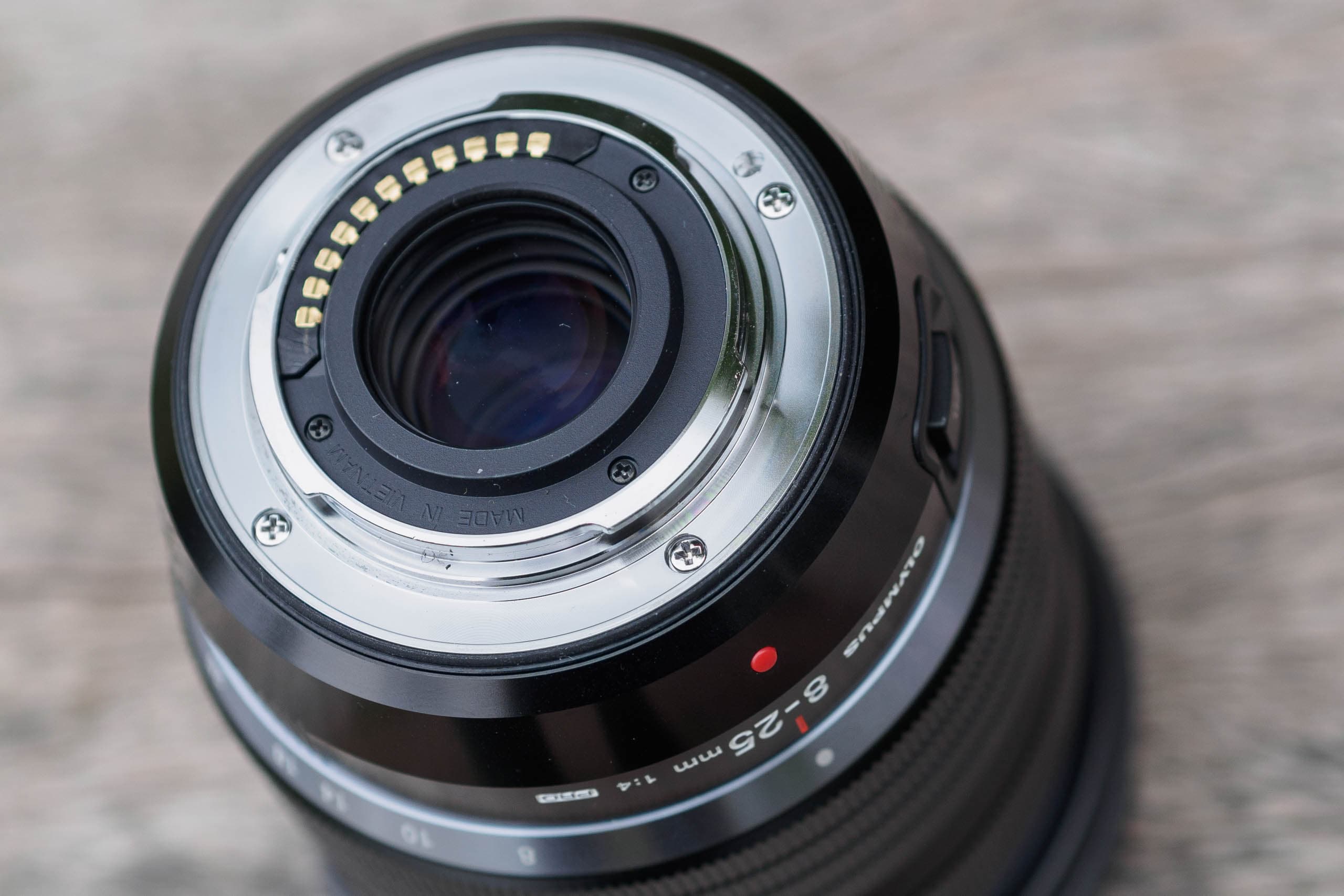 The all-metal barrel weighs in at 411g, while measuring 77mm in diameter and 88.5mm in length when retracted. This makes it slightly larger the Panasonic 8-18mm f/2.8-4, in terms of the space it will occupy in your bag, but almost 100g heavier. 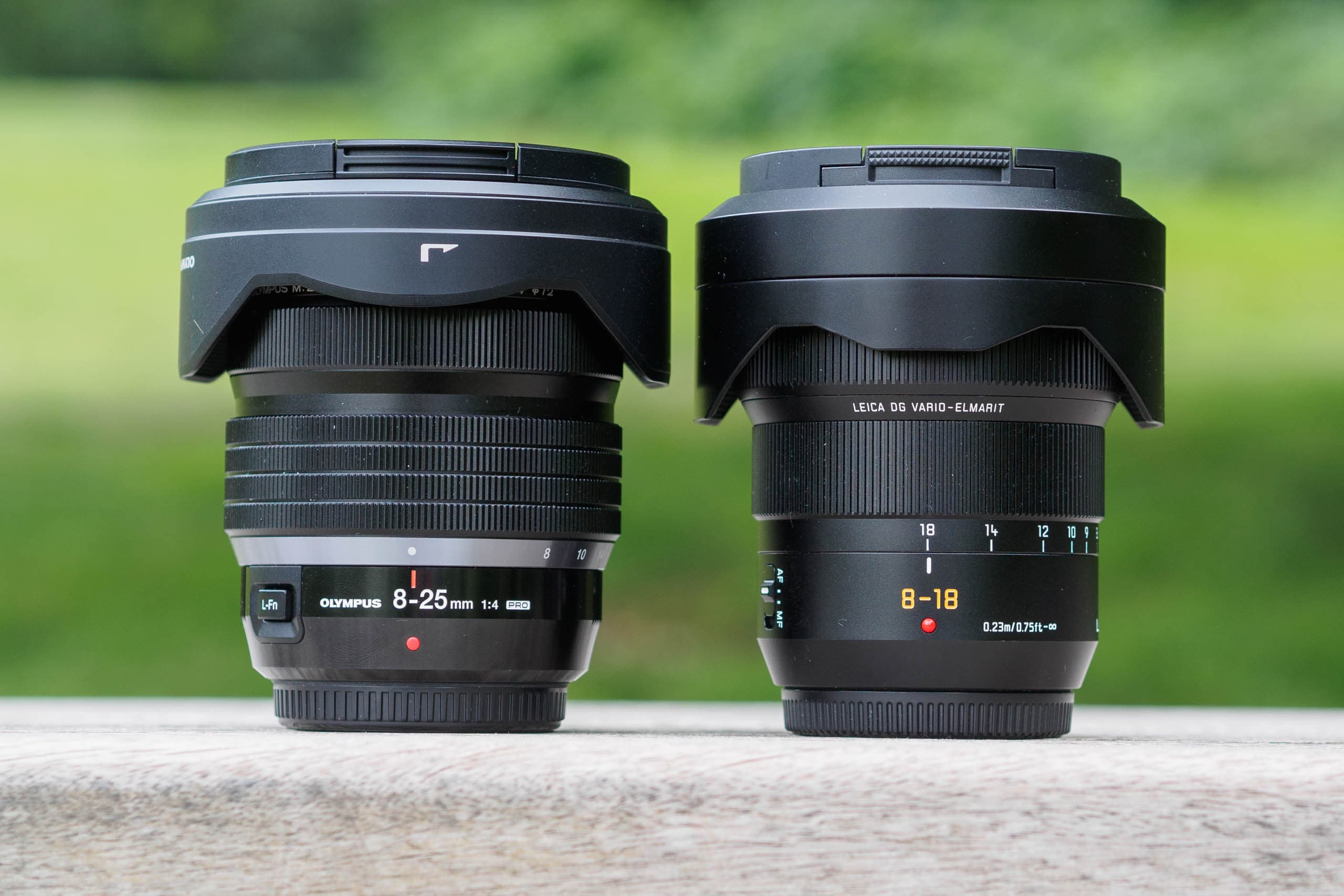 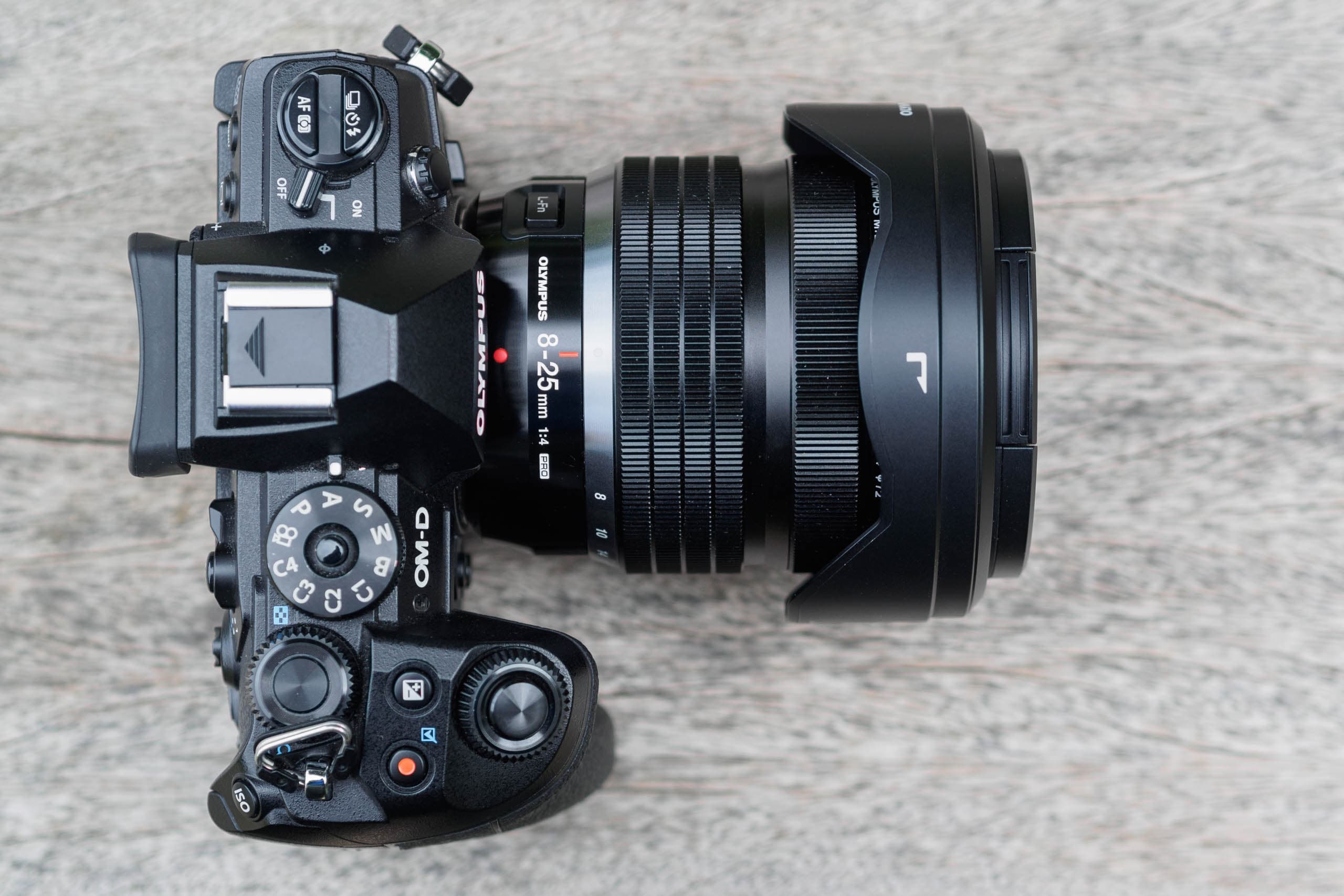 The 8-25mm is styled like Olympus’s other pro zooms. Here it’s mounted on the OM-D E-M1 Mark III.

The design language will be instantly familiar to Olympus users, with a broad zoom ring placed at the centre of the barrel so it falls naturally for operation by your left hand. Ahead of this you’ll find the manual focus ring, which has two distinct modes via a push-pull mechanism. 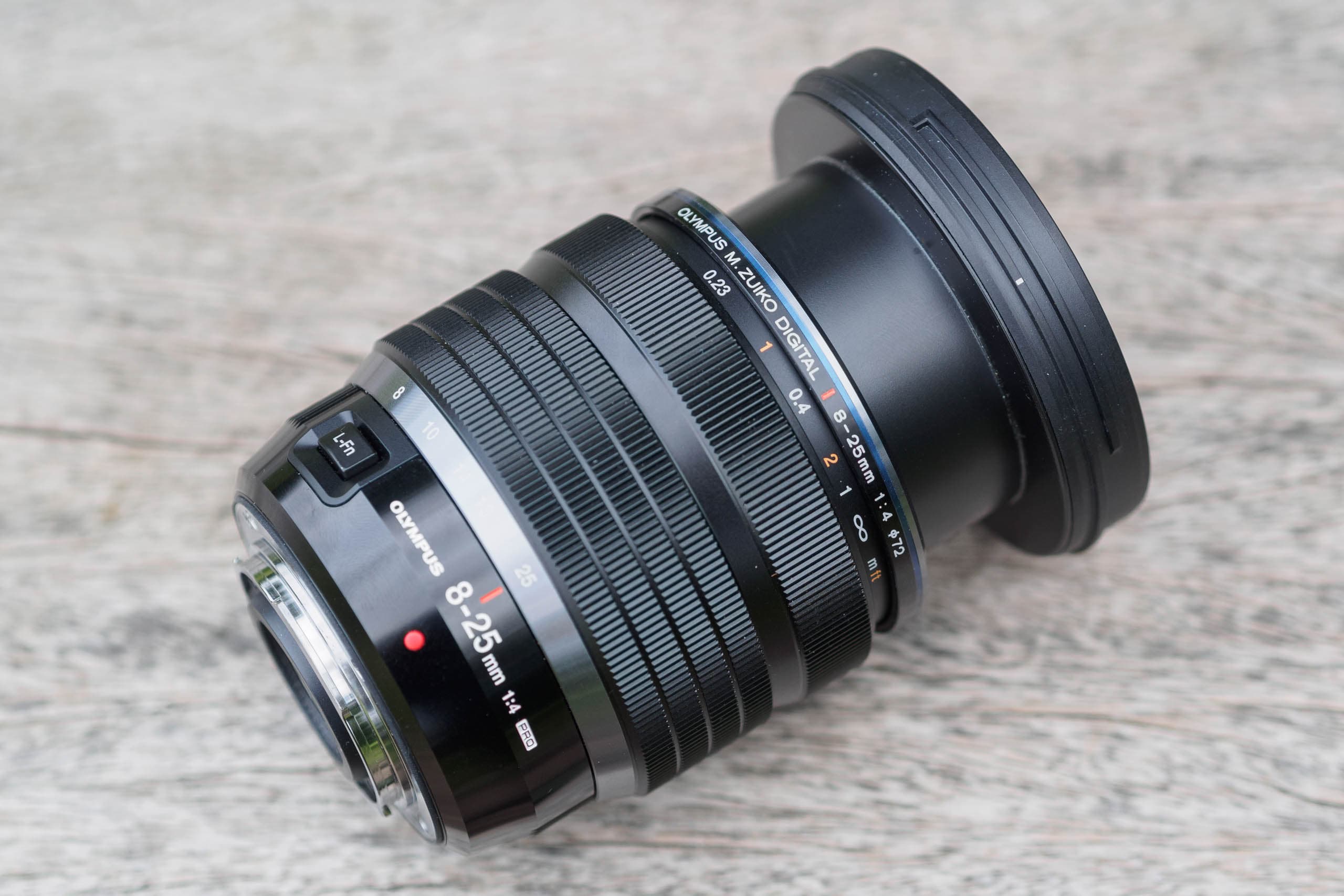 In its forward position, with the camera set to manual focus, the focus ring rotates smoothly and continuously, allowing extremely precise focus adjustment. Pulling it back towards the camera reveals a distance scale, and in this mode it behaves much like a traditional manual-focus lens, with hard end stops at the extremes of the focus range. So whichever way you prefer to work, Olympus has got you covered. 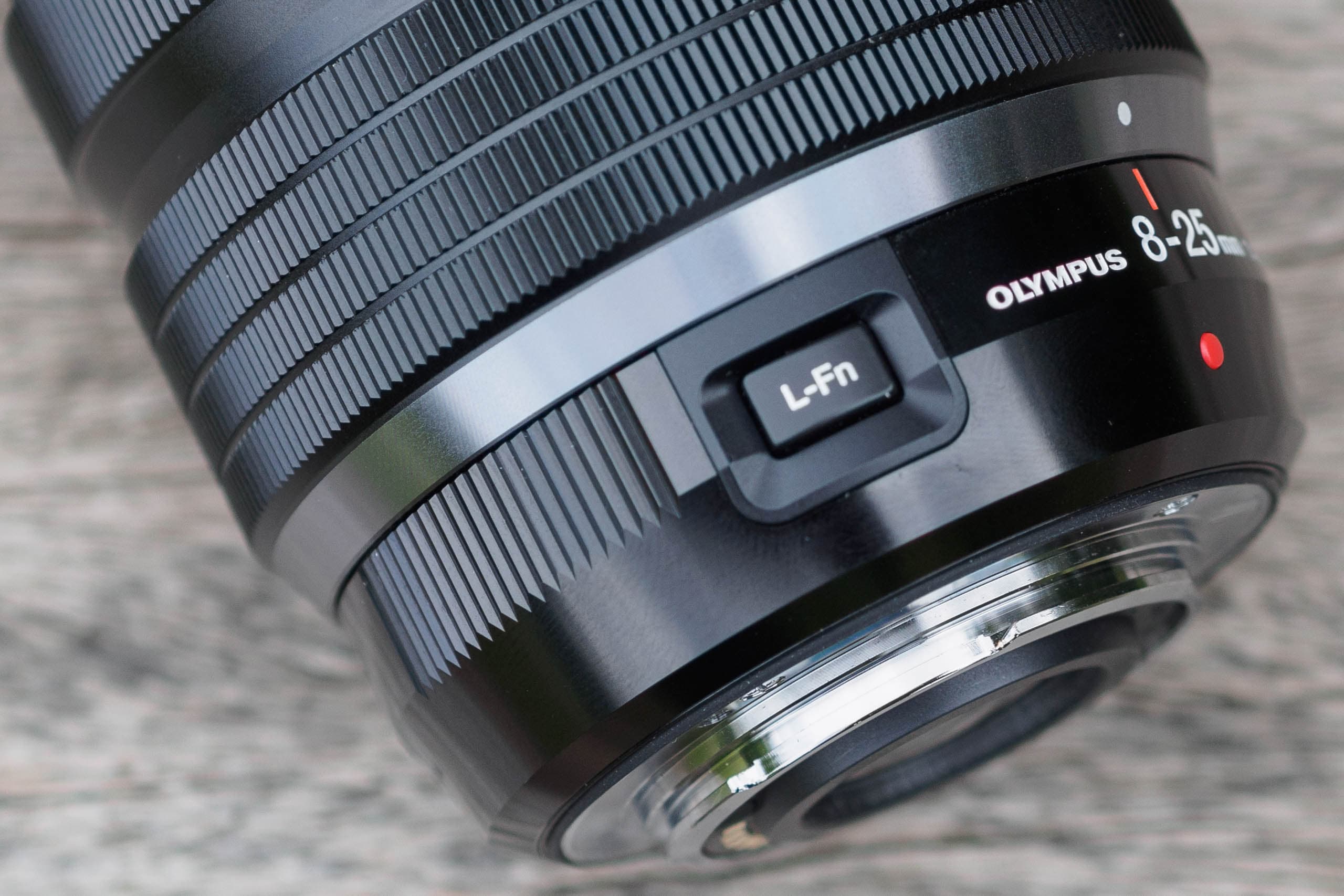 The L-Fn button performs AF-stop by default, but is customisable from the camera body

Olympus has also included its familiar L-Fn button that’s placed on the top left of barrel within easy reach of your left thumb. By default, this works as AF-stop, temporarily pausing autofocus. But it can be reconfigured to operate a range of other functions from the camera body.

When it comes to autofocus, there’s not much to say. The lens focuses silently, instantaneously and accurately, just as long as you give it a sensibly-defined target. It works just as well on the Panasonic G9 as it does on the Olympus E-M1 Mark III, and while you might spot a noticeable ‘wobble’ on Olympus’s older contrast-detection based models like the E-M5 Mark II, it’s still quick to focus. 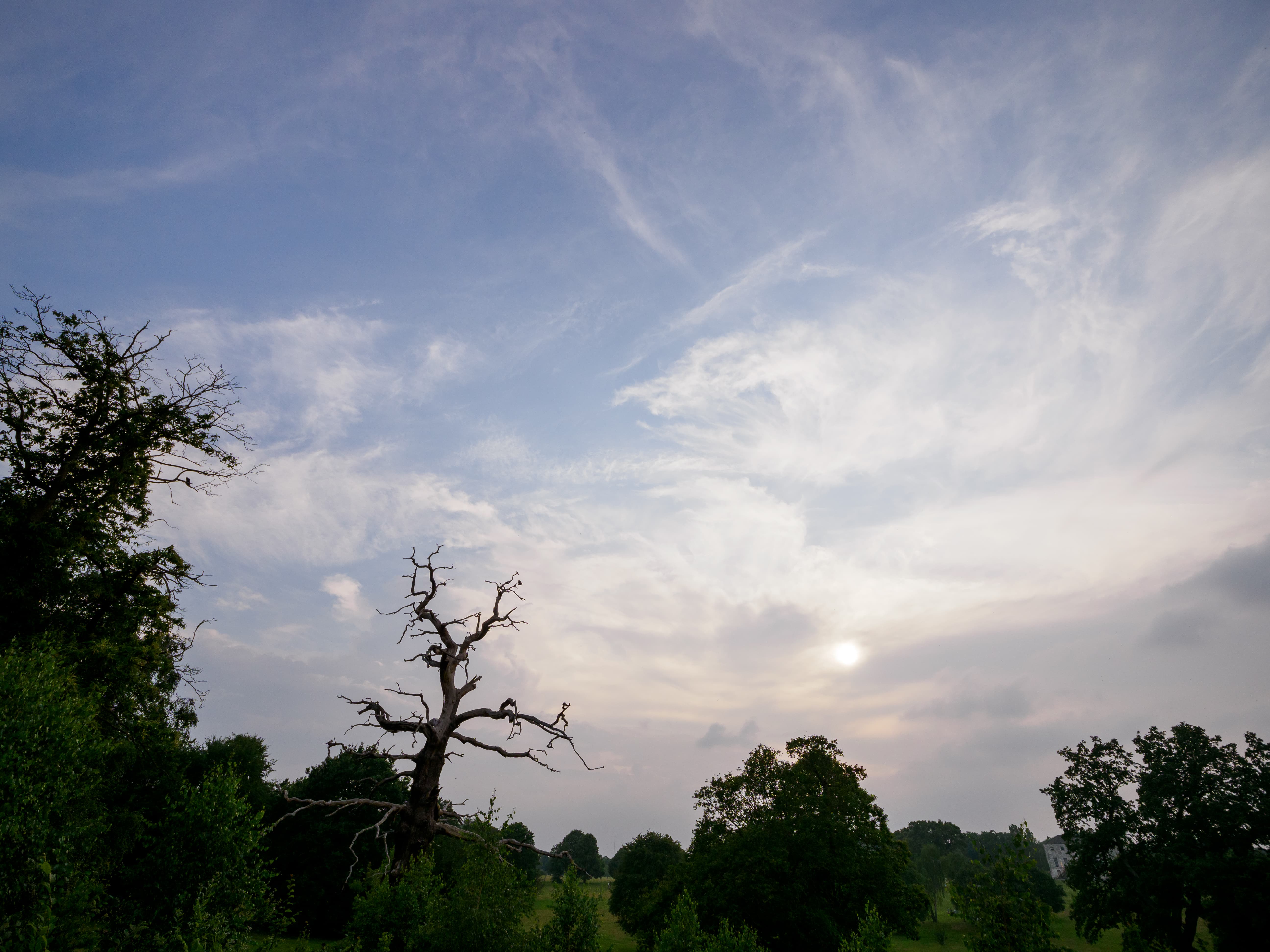 Switch to manual focus and there’s nothing to complain about either. As usual, turning the focus ring will engage your preferred focusing aid, either magnified view or peaking. I find the push-pull manual-focus clutch mechanism works very nicely, but on recent Olympus bodies it can be disabled from the menu if you don’t like it.

This is a £899 lens wearing a Pro badge, so I had high expectations for its optical quality. Equally, I expected some compromise for its extended zoom range, as wide zooms usually decrease in sharpness at the long end. But what’s remarkable about the 8-25mm f/4 is just how much detail it renders across almost the entire frame, almost regardless of focal length, aperture or focus distance. It’s a superb lens. 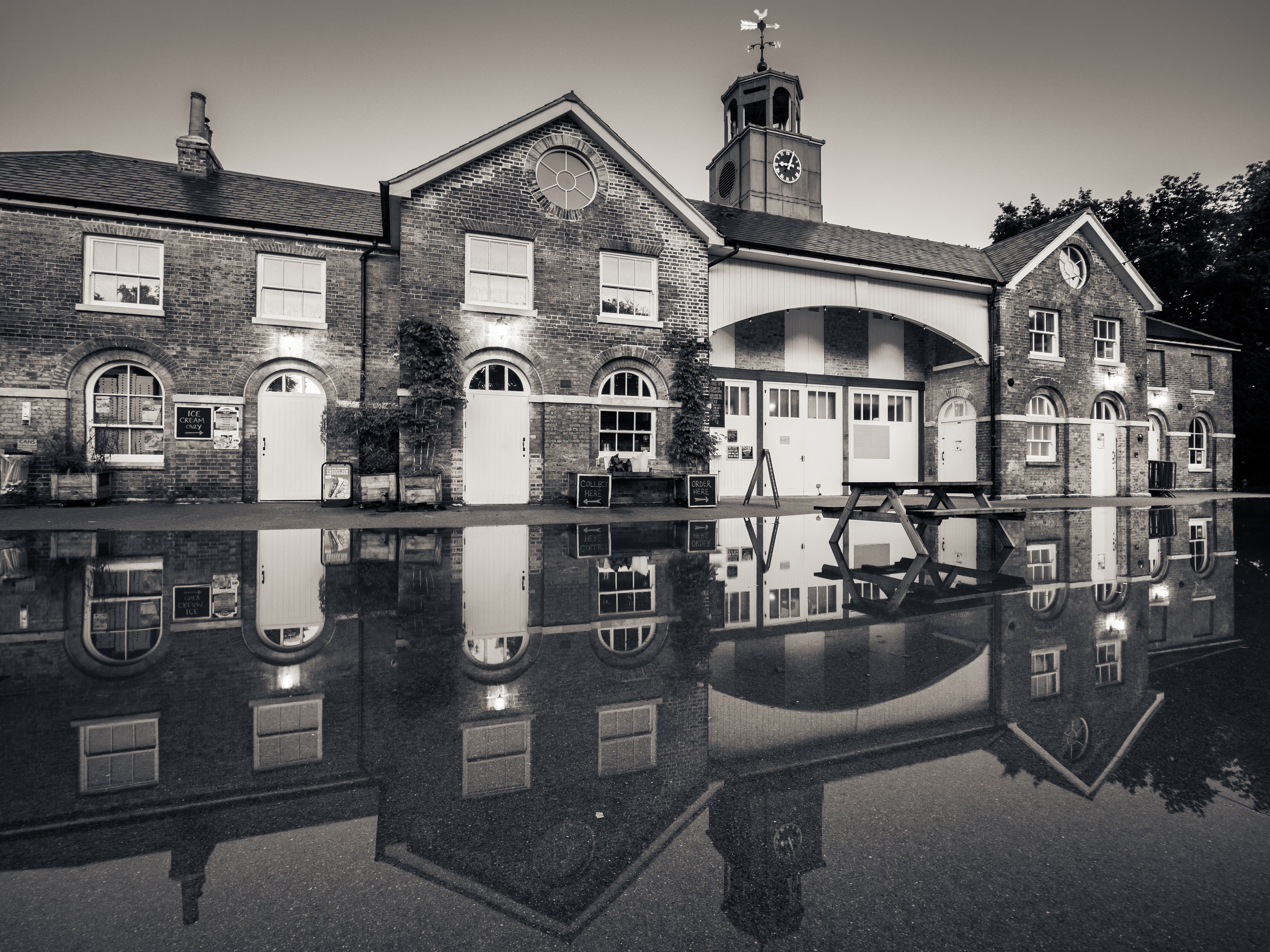 In my controlled side-by-side tests, it was at least a match for the Panasonic 8-18mm, and perhaps even a little sharper in the extreme corners at 8mm f/4. At 18mm it also gives the stellar Olympus 12-40mm f/2.8 Pro a run for its money, and while it’s perhaps a fraction less sharp at 25mm, in most situations you probably wouldn’t notice. 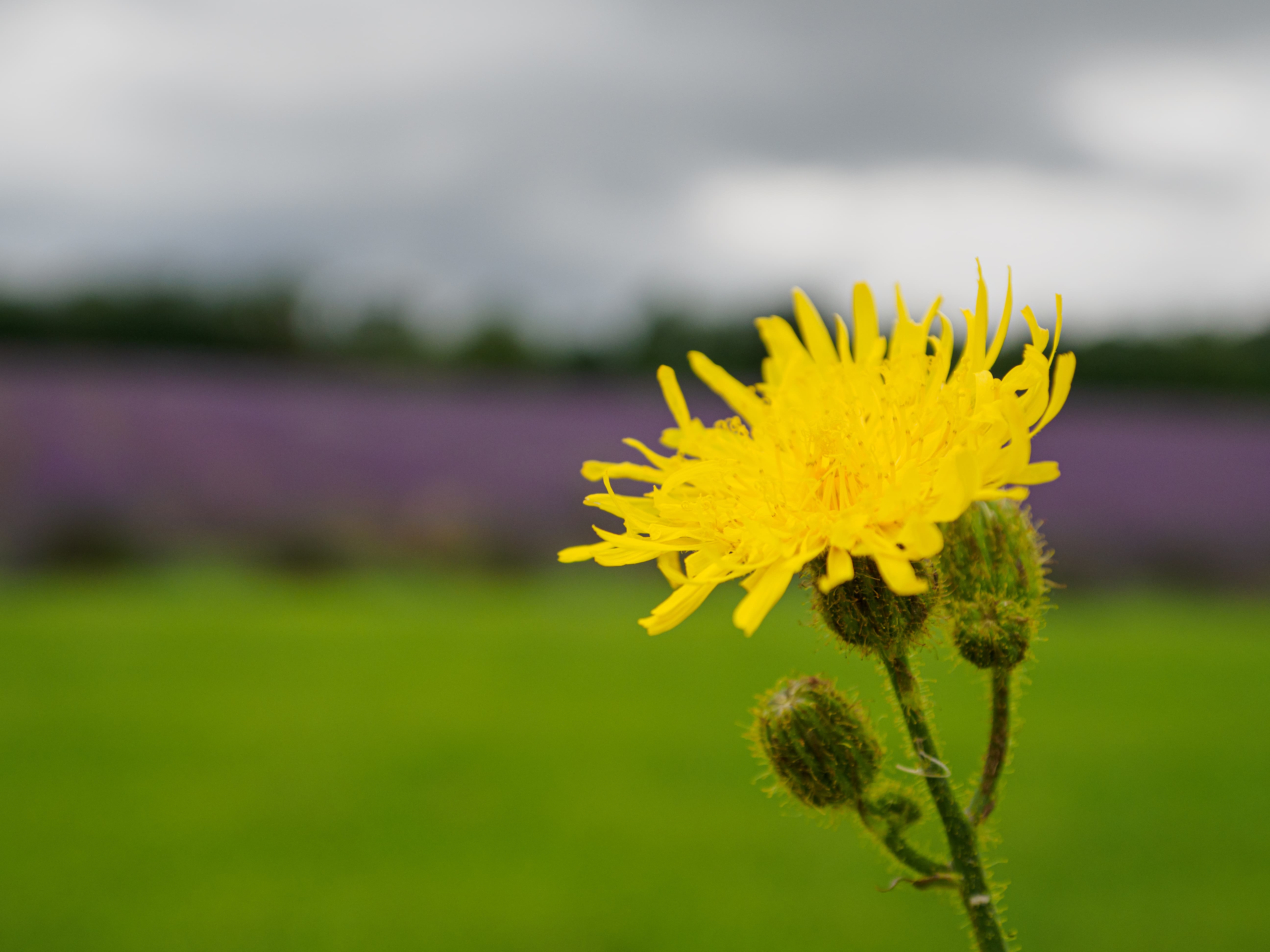 This impressive detail rendition is also maintained well across the full focus distance range, with the lens still giving very pleasing images when shooting at its maximum magnification. I wouldn’t hesitate to shoot it wide open, although as usual for Micro Four Thirds, I’d generally avoid apertures smaller than f/11 due to diffraction blurring. 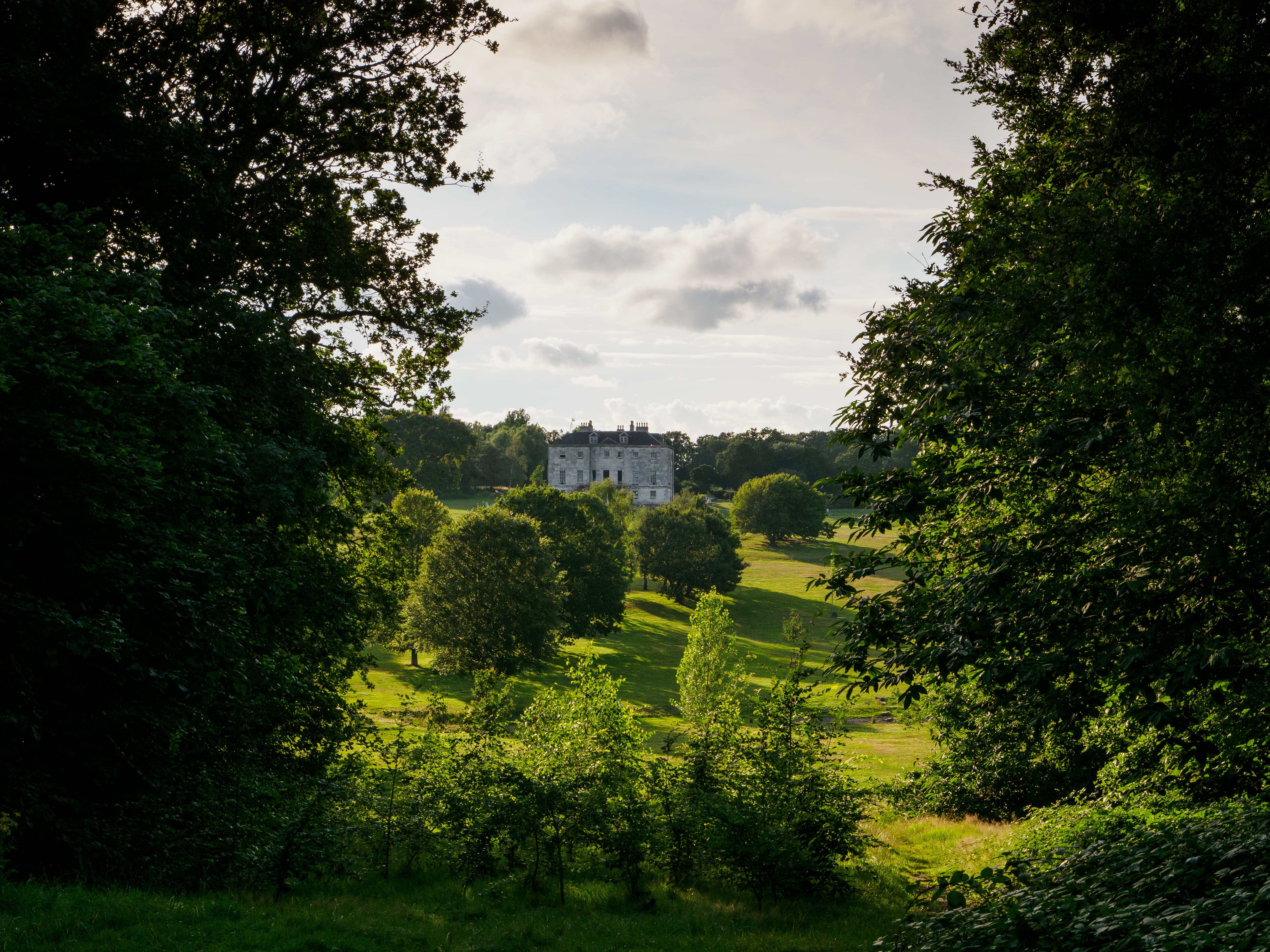 Micro Four Thirds integrates software compensation into the system design, which means that you won’t see any of the aberrations that otherwise appear with ultra-wide zooms. Curvilinear distortion is fully corrected, so straight lines along the edge of the frame aren’t drawn bent, while colour fringing due to chromatic aberration is also effectively suppressed. 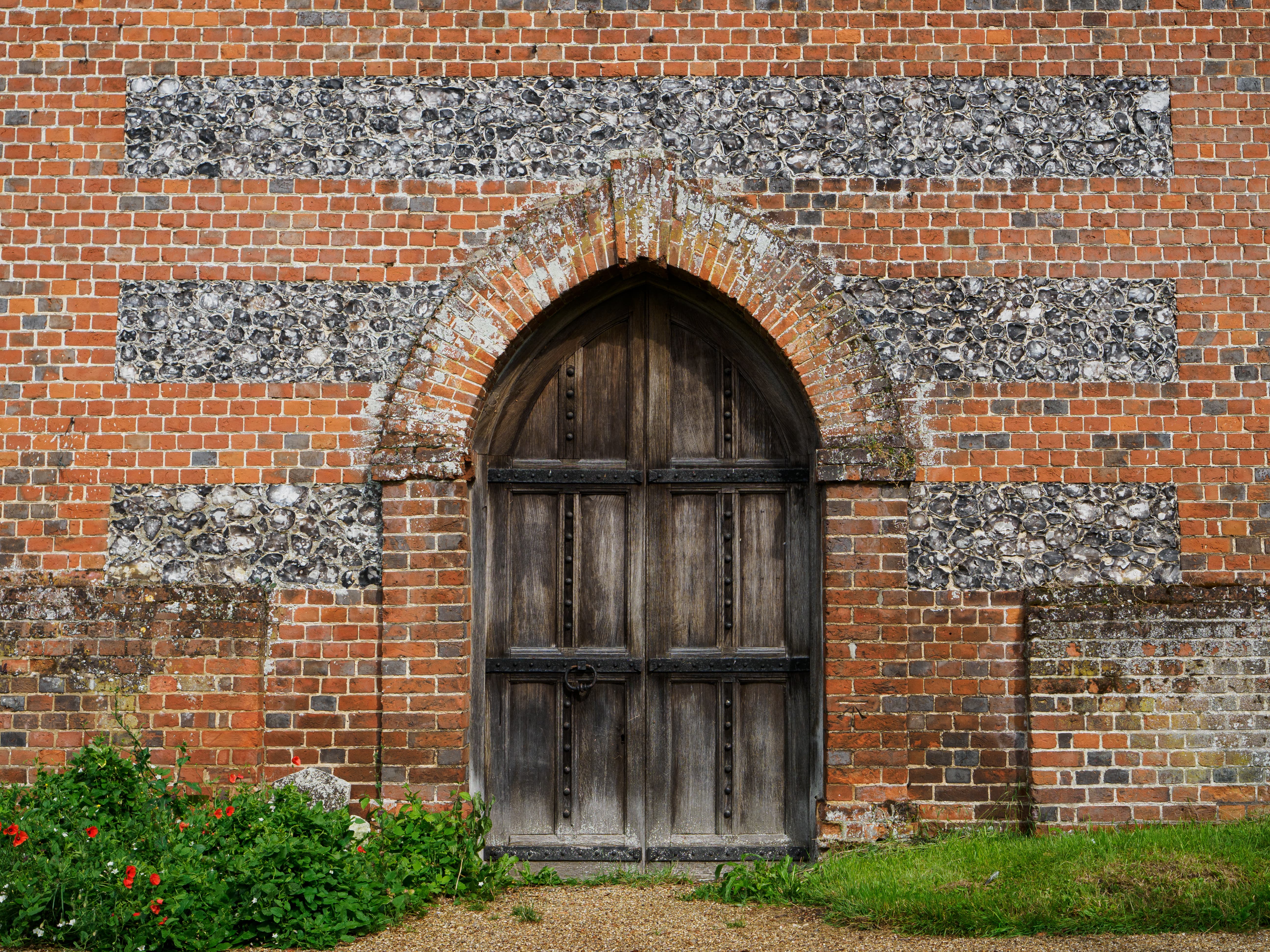 A small amount of vignetting is detectable at 8mm f/4 if you go looking for it, but it’ll have no real-world impact on your images. The lens also deals well when shooting directly into the light, with little loss of contrast. The overall takeaway message is that this is a lens that consistently delivers extremely clean, detailed images. 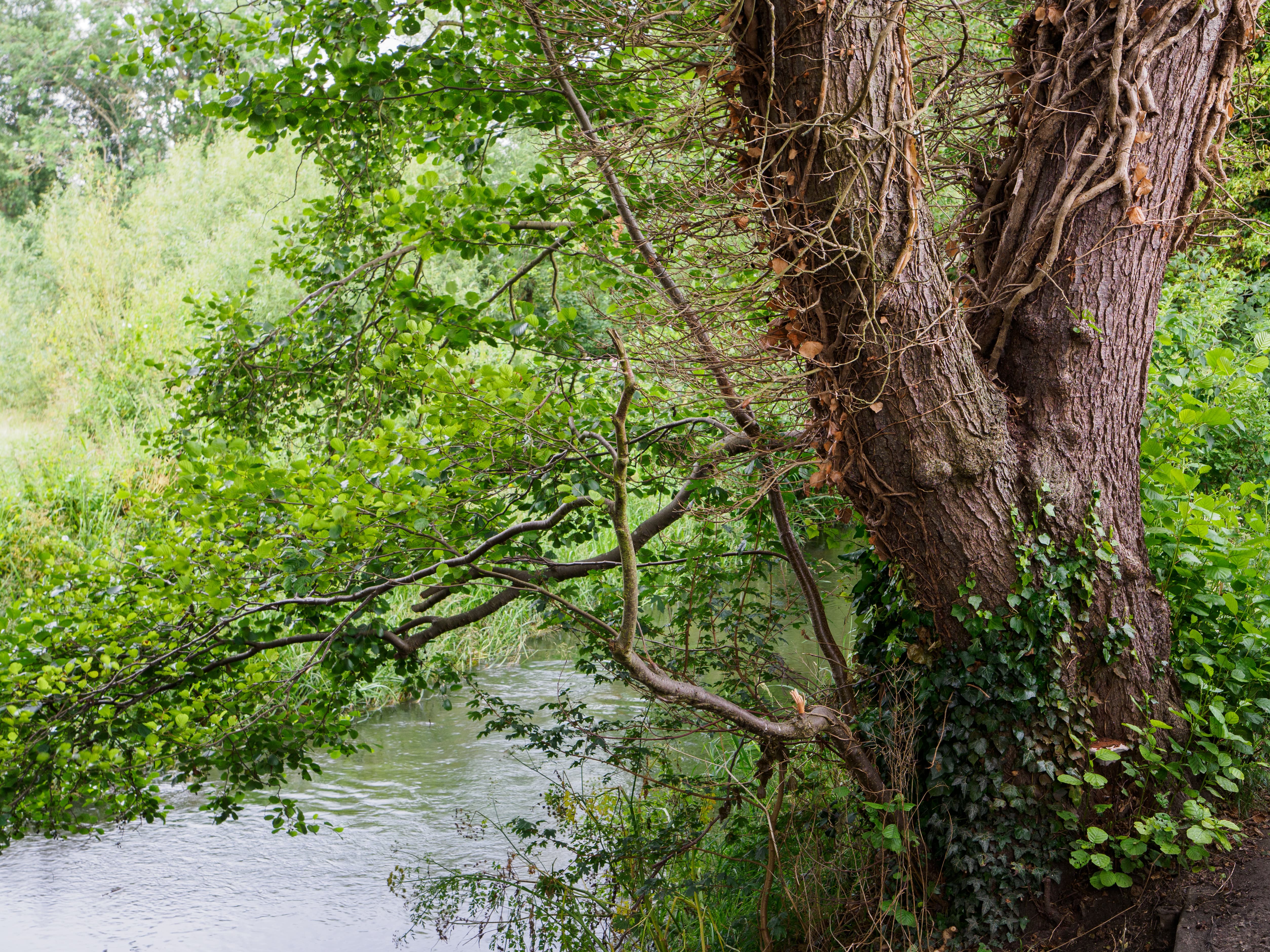 Landscape photographers who wish to use a square filter system will also find this lens much more tractable than the 7-14mm f/2.8 Pro. With the Formatt Hitech Firecrest 85mm system, there’s no vignetting with the holder set straight, and just a little when it’s angled, which disappears on zooming in to 18mm. If you use a 100mm system, you’ll see no problem with vignetting at all.

Just from looking at its specifications, it might be difficult to work out why you’d buy the Olympus 8-25mm f/4. It’s not the small, lightweight, relatively affordable wide zoom that some users were hoping for, akin to last year’s 12-45mm f/4 Pro. Instead, it’s the same size and price as the excellent Panasonic 8-18mm f/2.8-4, but heavier. Most users will already have the extra 18-25mm focal-length range covered with a standard zoom, so what’s the point? 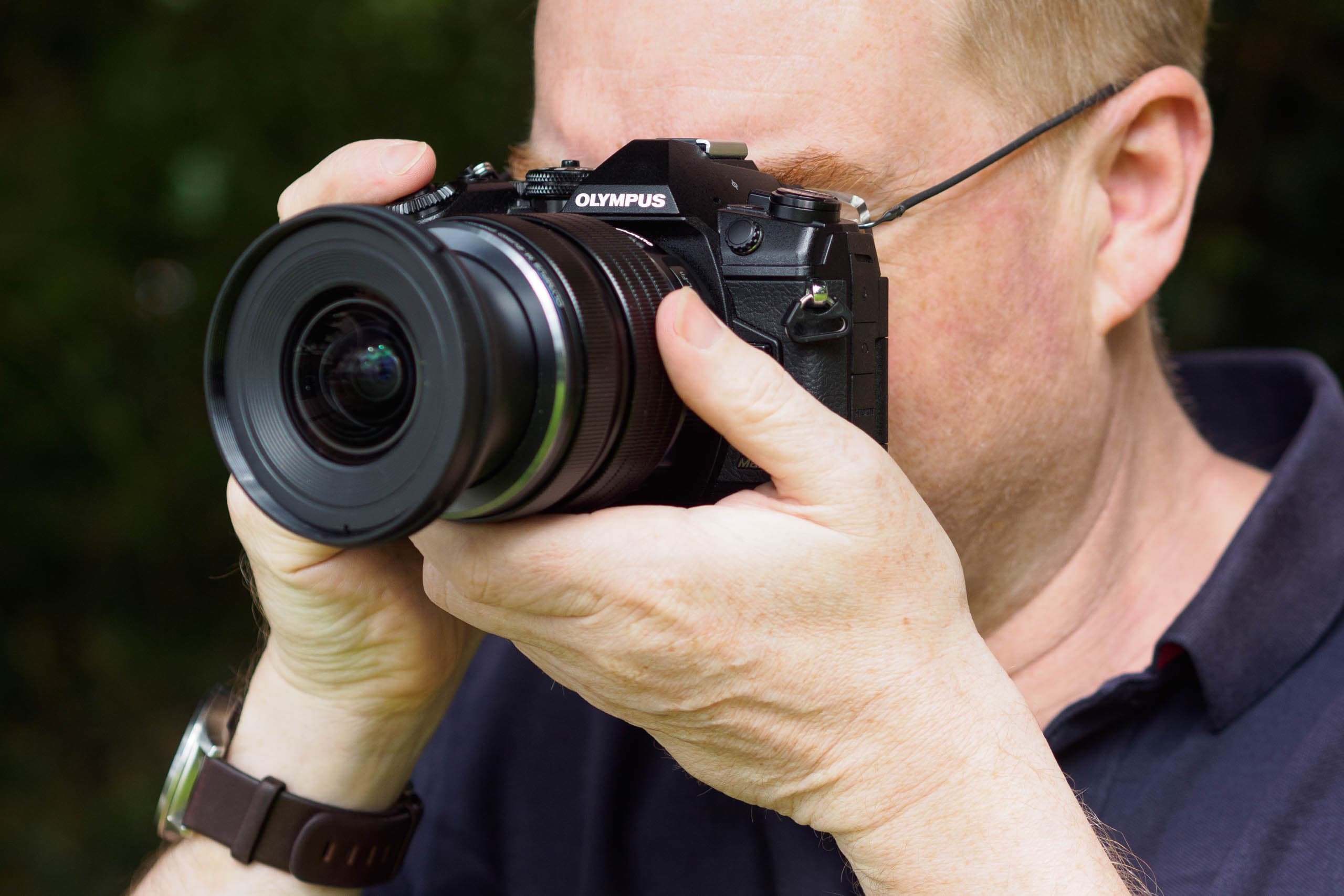 In practical use, the 8-25mm f/4 offers rather more versatility than the average wideangle zoom

The answer becomes apparent when you head out and start taking pictures, because this turns out to be a uniquely versatile lens. Thanks to its extended 50mm equivalent long end and impressive close-up capability, it’s not like using a conventional wideangle zoom at all. It’s almost better seen as an everyday lens that can zoom out to ultra-wide. 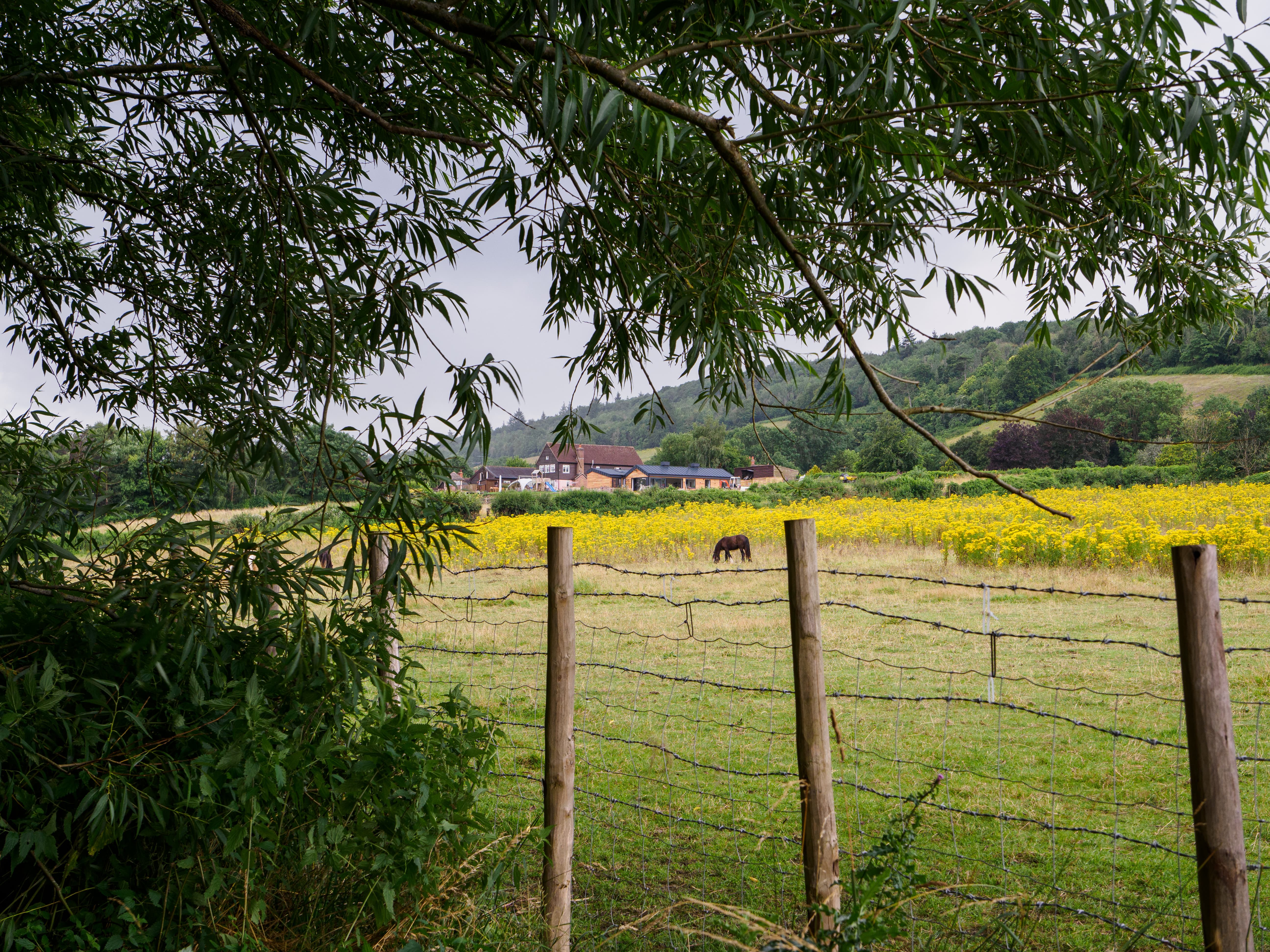 With its superb optics, the 8-25mm f/4 Pro also stands also shoulder to shoulder with the other MFT wide zooms. So the choice between them really comes down to features. Compared to the 7-14mm f/2.8, the 8-25mm’s lighter weight and ability to accept screw-in filters makes it a better option for landscape photography, although those shooting interiors may benefit more from the wider, brighter lens. Equally, some users still will prefer the lighter Panasonic 8-18mm f/2.8-4. It’s a very close call between the three, but for all-round versatility, the Olympus 8-25mm f/4 just about pips the contest. 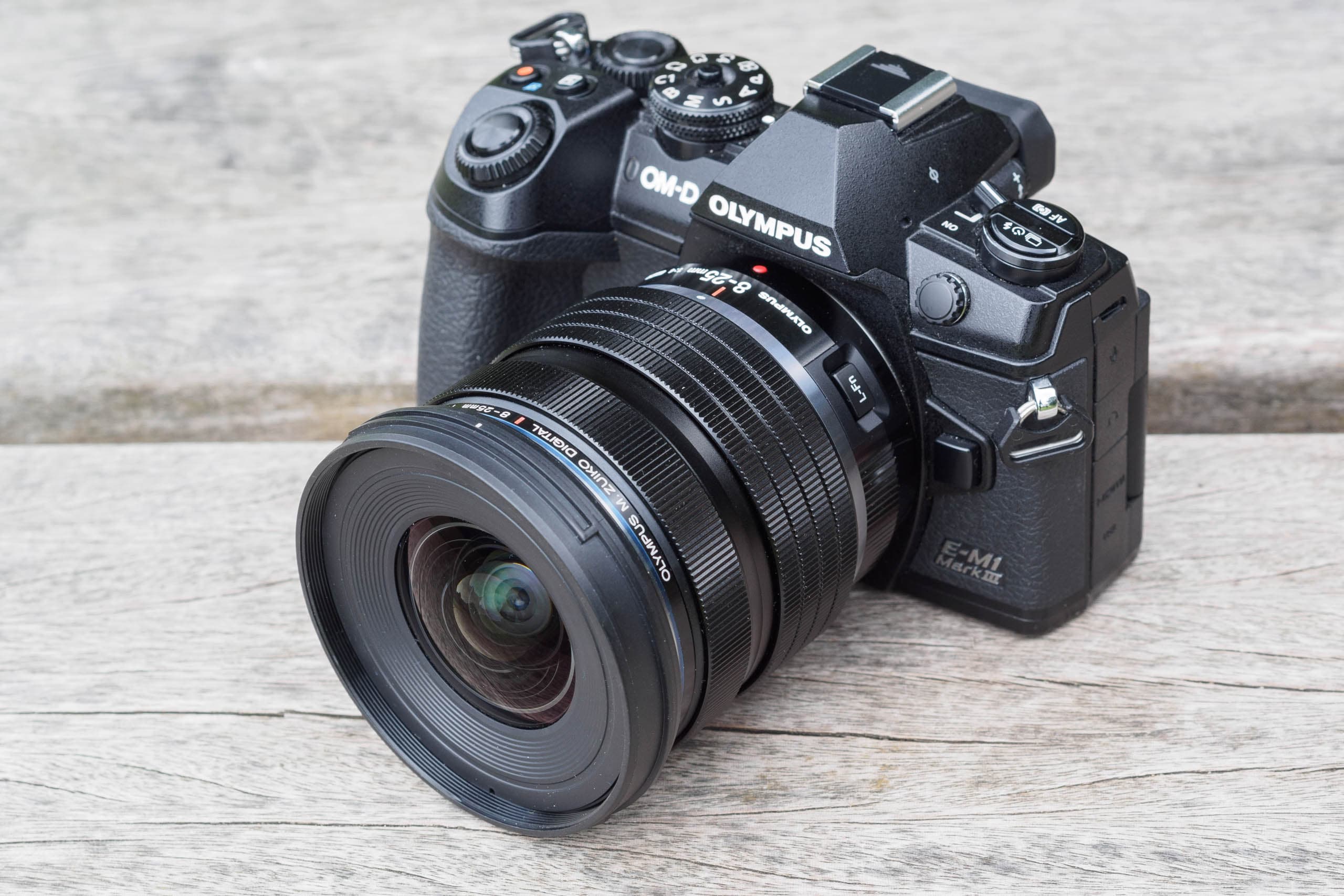