Cons: - Can be susceptible to flare 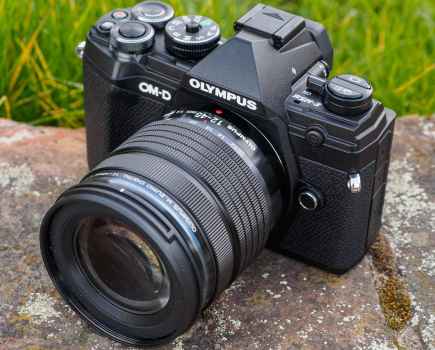 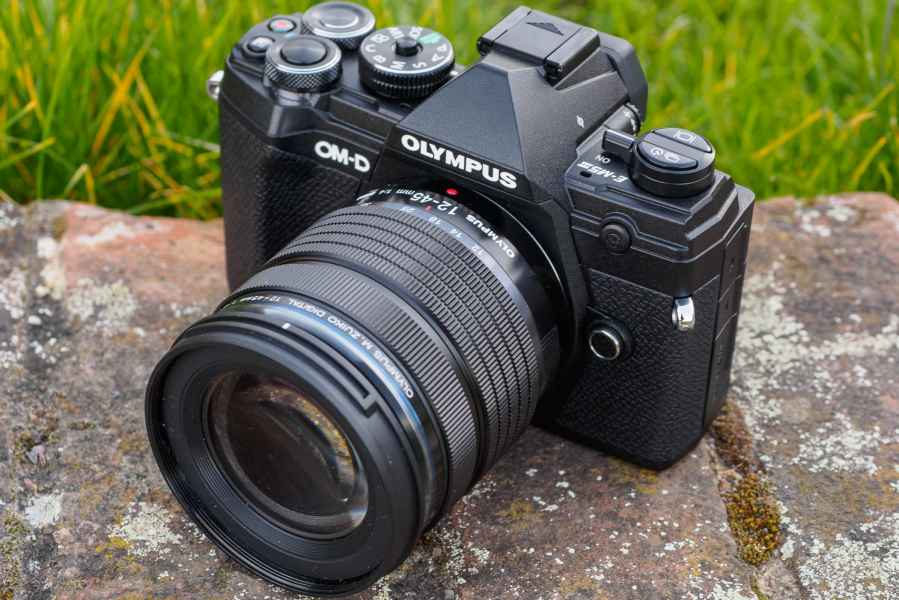 Cons: - Can be susceptible to flare

When mirrorless cameras first appeared, one of their main attractions was supposed to be decreased size and weight. Indeed Olympus and Panasonic’s original joint press release announcing the birth of Micro Four Thirds, the world’s first mirrorless system, declared that it would enable users to ‘take advantage of significantly more compact lenses, particularly in the wide-angle and high-power zoom range’. 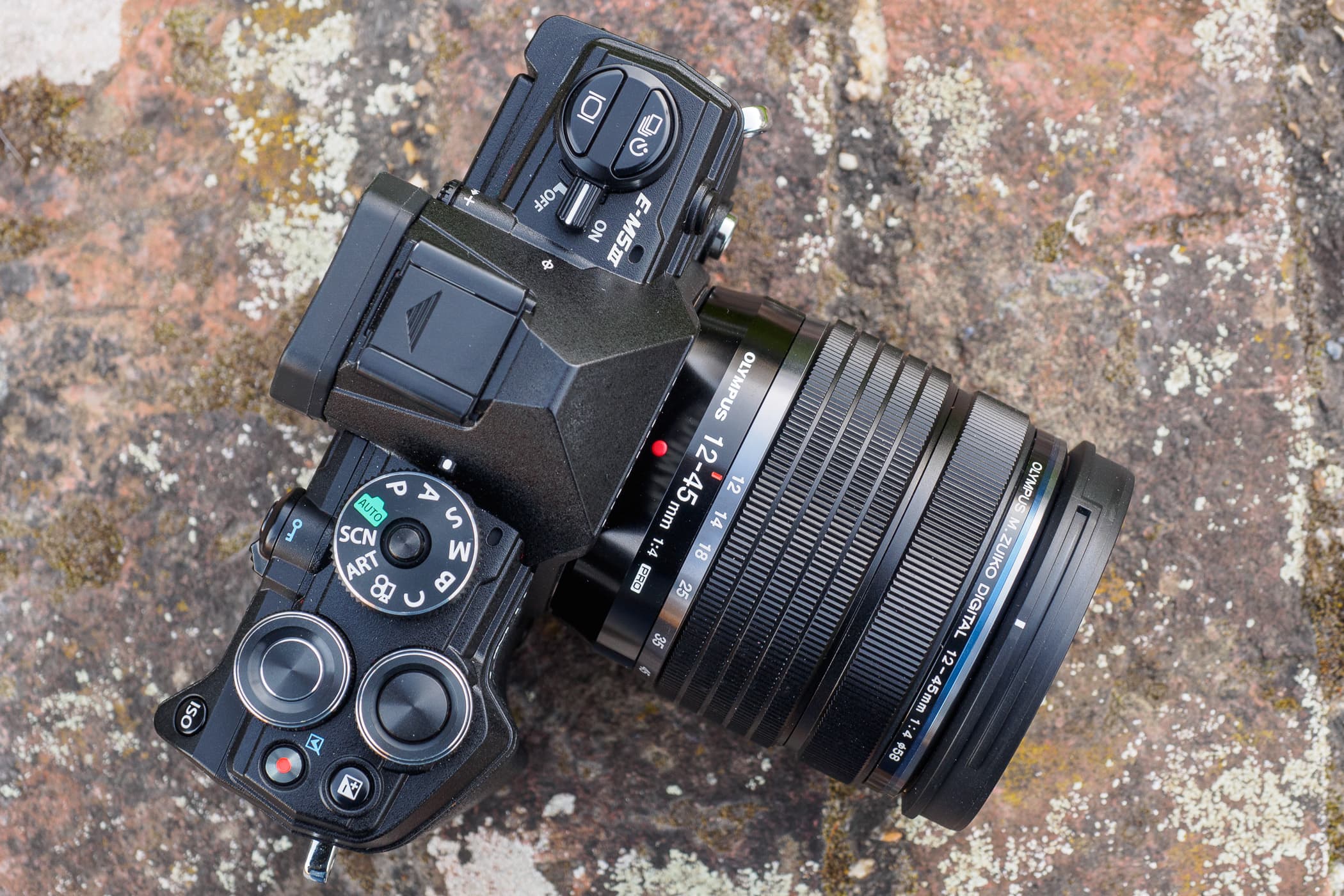 Cosmetically, the 12-45mm F4 is instantly recognisable as on of Olympus’s Pro-line lenses

As things have progressed, though, this goal often seems to have been lost by the wayside, to the extent that while the latest full-frame mirrorless cameras may be smaller than their DSLR counterparts, their lens systems have generally become larger.

Reduced size and weight is still a key benefit of smaller-sensor cameras, however, and Olympus seems to be particularly intent on maximizing this advantage with its latest round of releases. Following hot on the heels of the compact, lightweight OM-D E-M5 Mark III camera comes its latest optic, the M.Zuiko Digital ED 12-45mm F4 Pro, which the firm claims is the world’s smallest and lightest zoom with a constant maximum aperture. It’s designed to provide users with premium optics and tough, weather-sealed build quality in a tiny package that’s just 7cm long and weighs 254g. 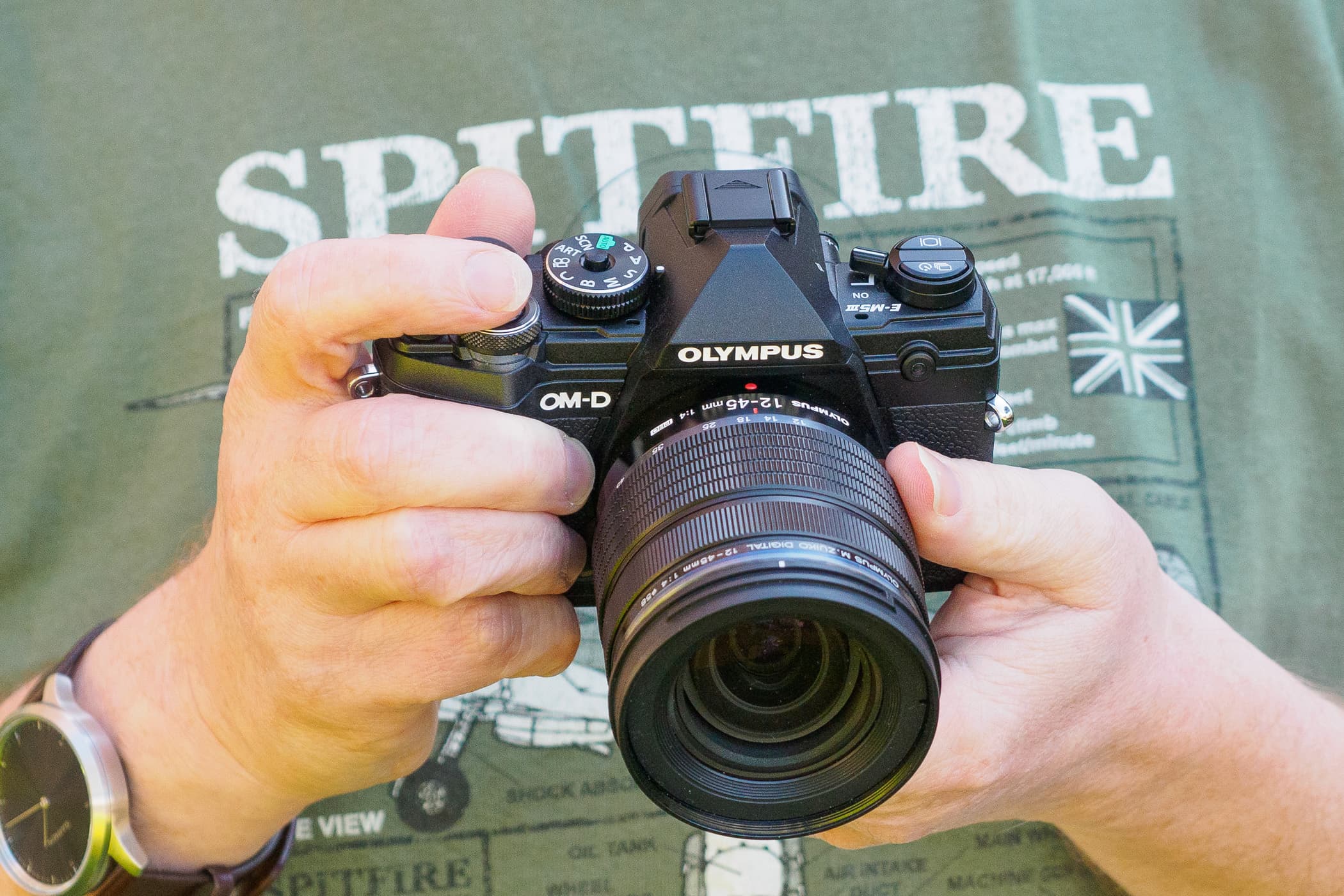 With a versatile zoom range equivalent to 24-90mm in full-frame terms, it looks like an ideal complement to the E-M5 III, although the £599 price tag could be a tough sell for a lens this small. Interestingly Olympus’s latest lens roadmap suggests that it will be joined by matched f/4 Pro-series wideangle and telephoto zooms, perhaps covering 8-25mm and 40-150mm ranges.

Olympus says that the 12-45mm f/4 employs an optical formula based in its existing M.Zuiko Digital ED 12-40mm F2.8 Pro, which is an enticing prospect given that this one of the finest standard zooms currently available. Detailed examination shows that the new lens’s 12-element, 9-group formula is indeed very closely related to its sibling’s 14-element, 9-group design. 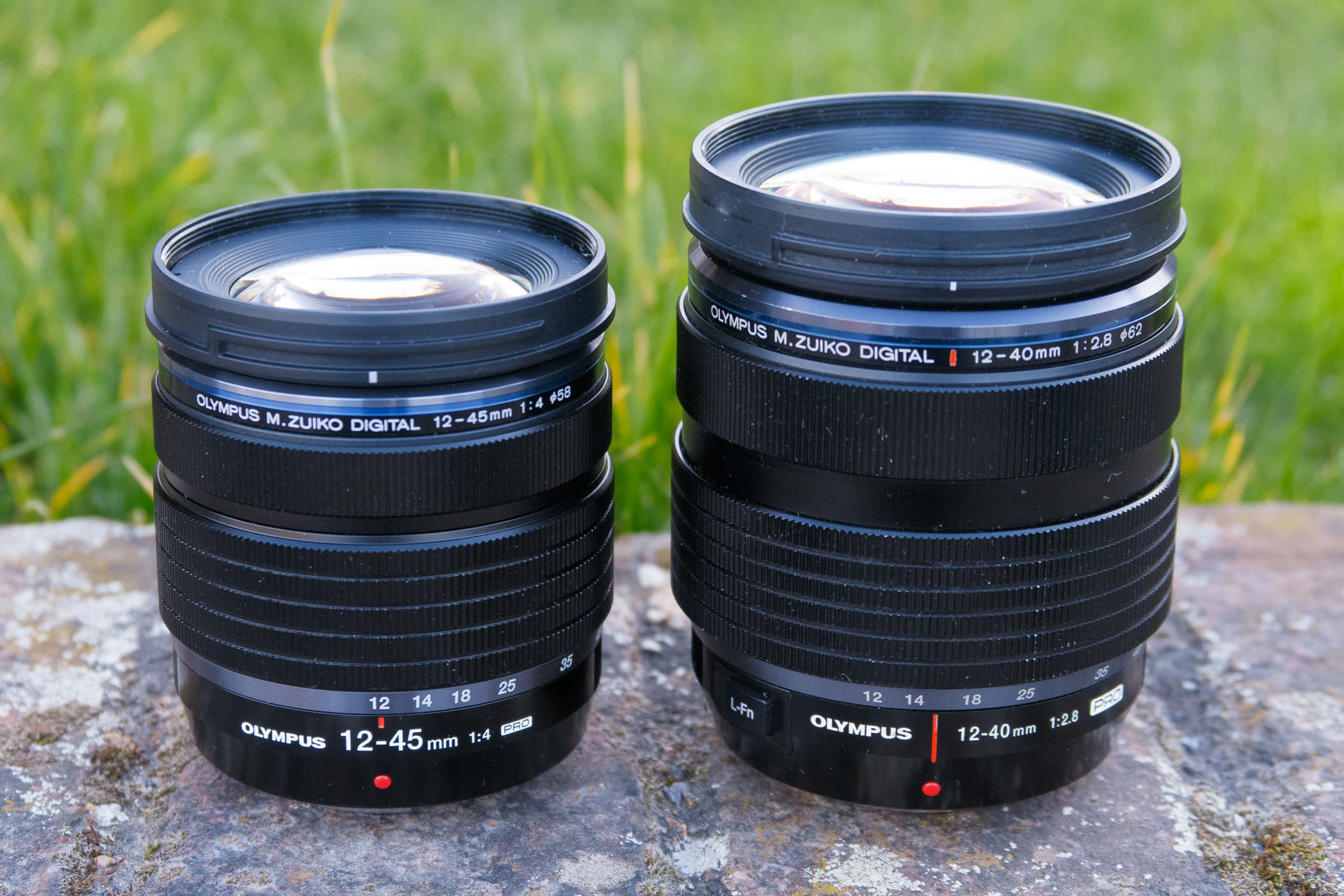 As part of the premium Pro series, the 12-45mm F4 is also designed to be dust-, splash- and freeze-proof, with a range of seals protecting vulnerable points such as the front element, manual-focus and zoom rings, and mount. 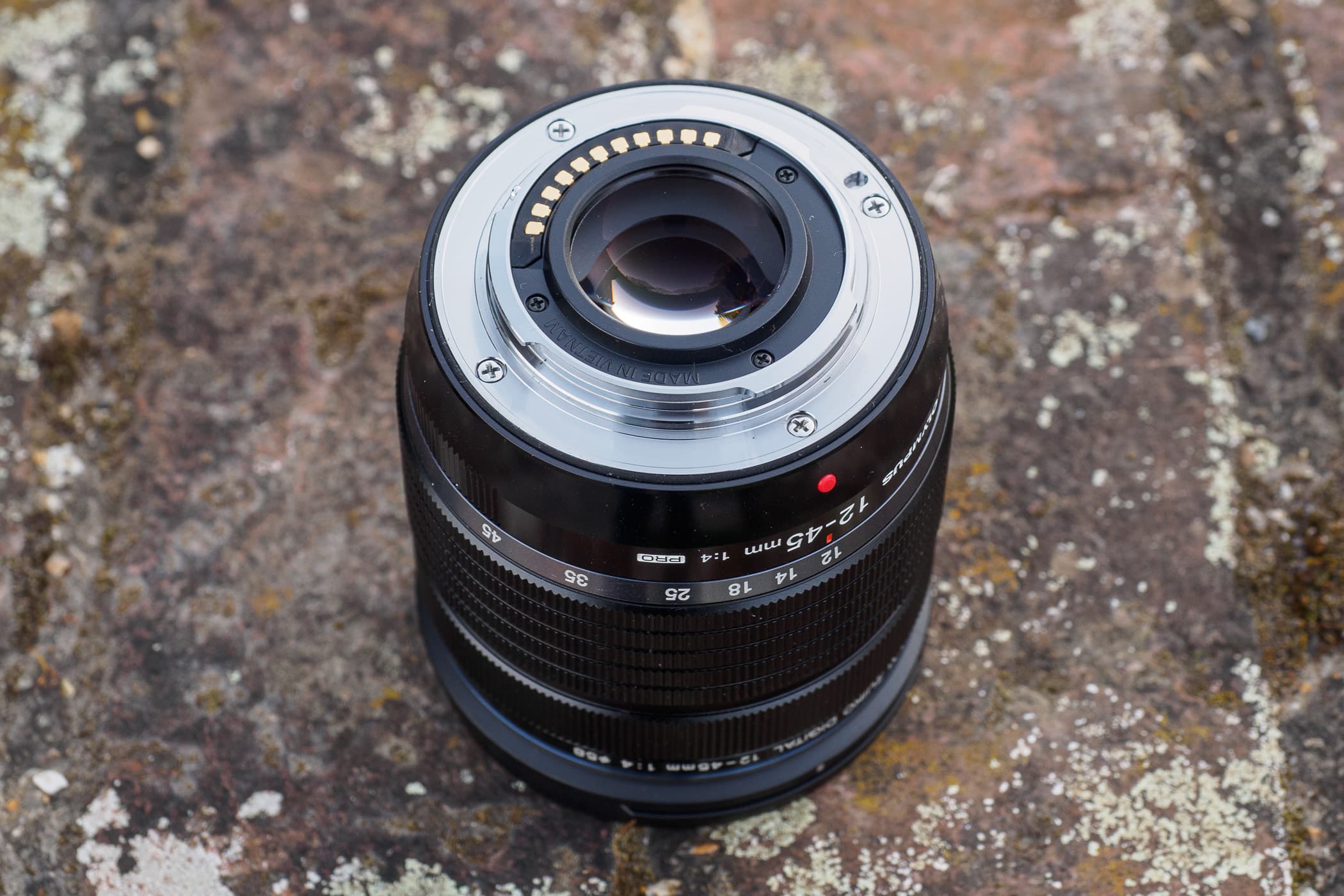 One feature it gives up relative to the firm’s other Pro zooms, though, is the push-pull focus clutch; instead it employs a simple, continuously rotating electronic manual focus ring. This drives a single focusing element that’s placed towards the rear of the lens, which also affords rapid, silent autofocus.

The aperture diaphragm employs seven curved blades in a bid to provide attractive background blur. However with the f/4 maximum aperture giving equivalent depth-of-field characteristics to f/5.6 on APS-C and f/8 on full-frame, you won’t see a huge degree of blur, except during close-up shooting. 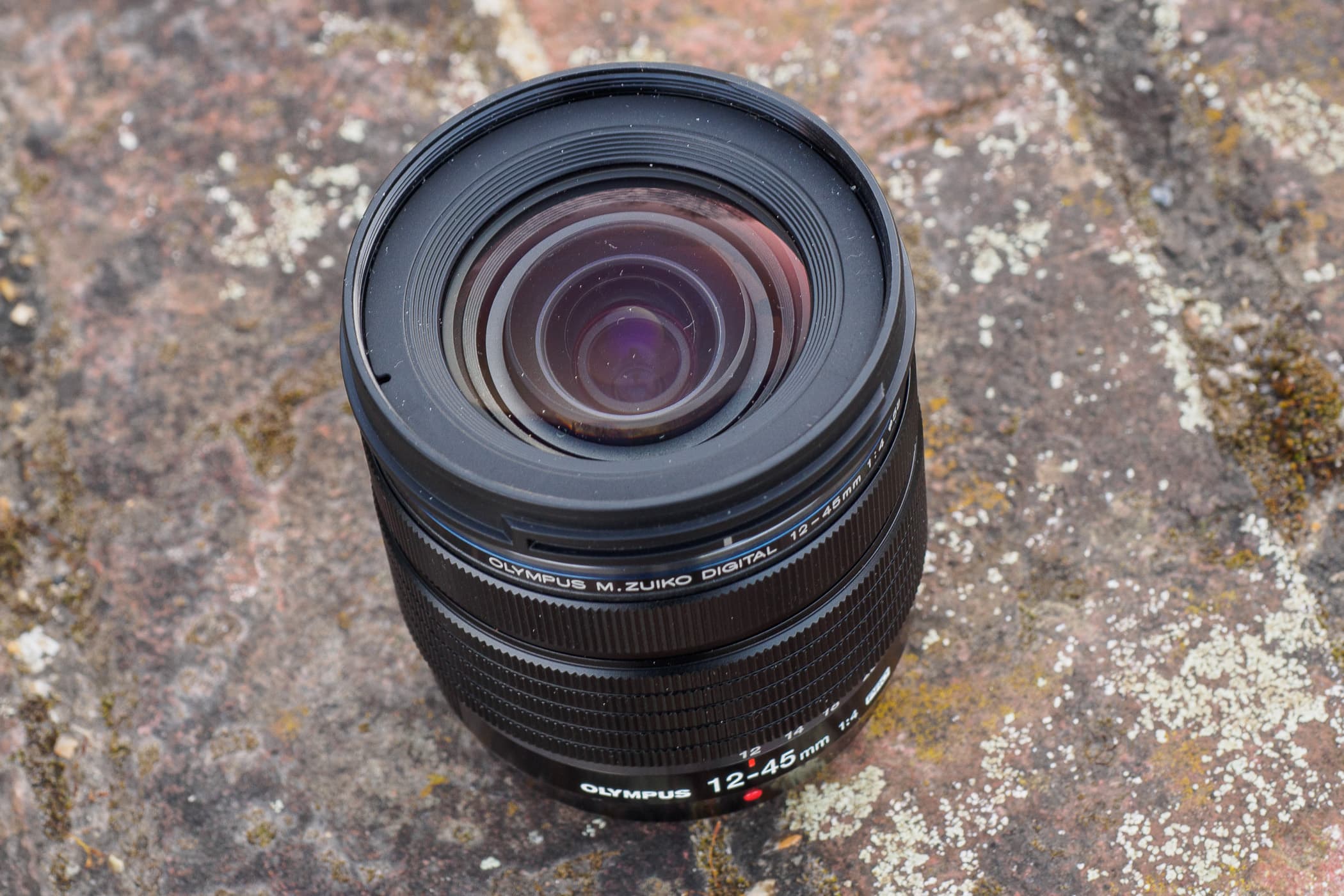 But here the lens has another trick: its minimum focus distance ranges from 12cm at wideangle to 23cm at telephoto, maintaining an impressive 0.5x equivalent magnification across the entire zoom range. It’s also compatible with the focus bracketing and stacking functions built into Olympus’s recent models, which allow depth of field to be extended without sacrificing background blur. 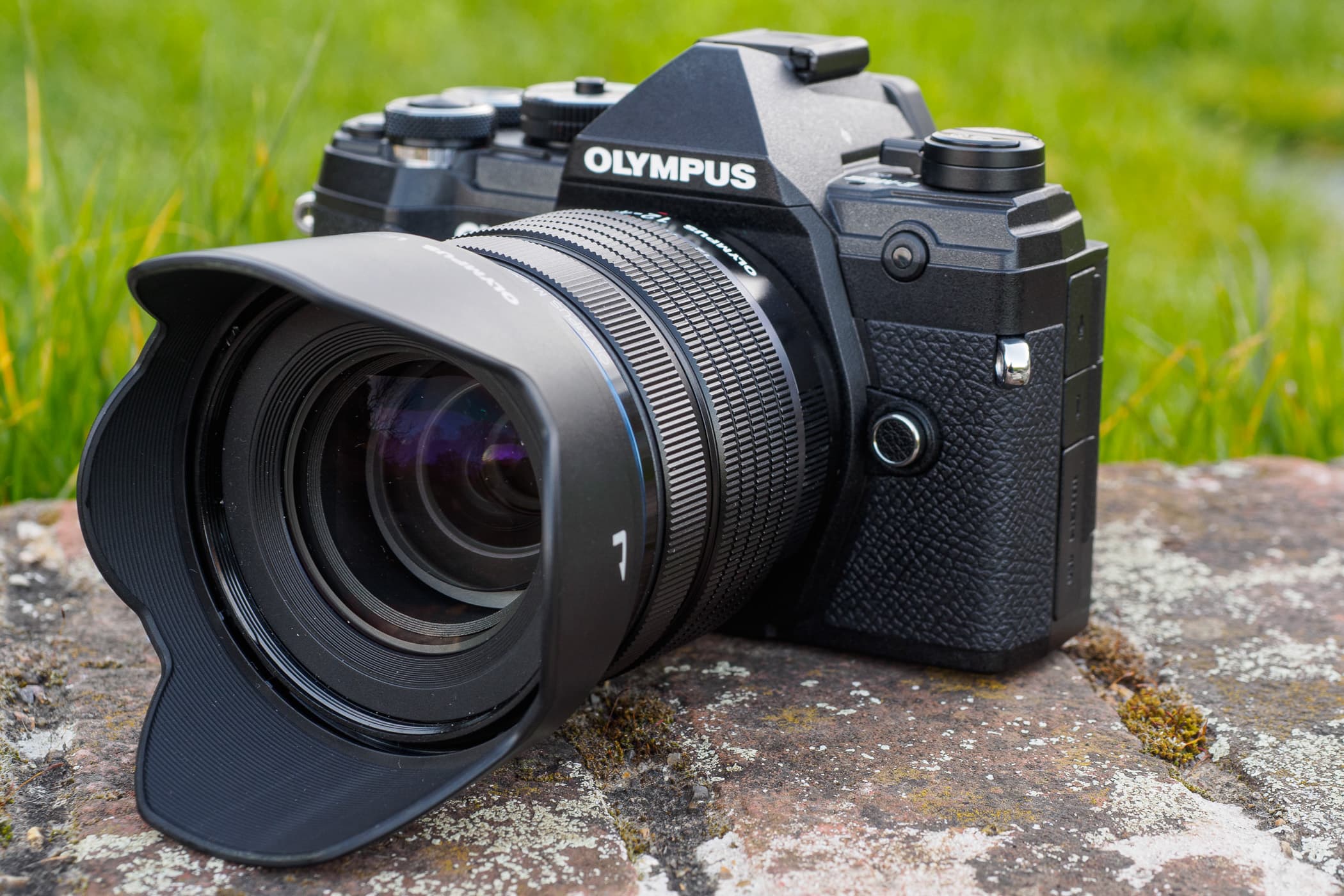 A bayonet fit, petal-type lens hood is included in the box

In the box you’ll find a simple bayonet-fit plastic lens hood, which reverses neatly over the barrel for storage, but lacks any locking mechanism to hold it in place. The accessory thread measures just 58mm, which enables the use of relatively inexpensive filters.

In terms of design, the 12-45mm f/4 is immediately recognisable as a Pro-series optic. It employs a familiar-looking all-metal barrel, with finely ridged grips to the focus and zoom and focus rings. The latter falls naturally to your fingers, and both operate super-smoothly. But there’s no space for a customisable L.Fn button on the lens’s barrel. 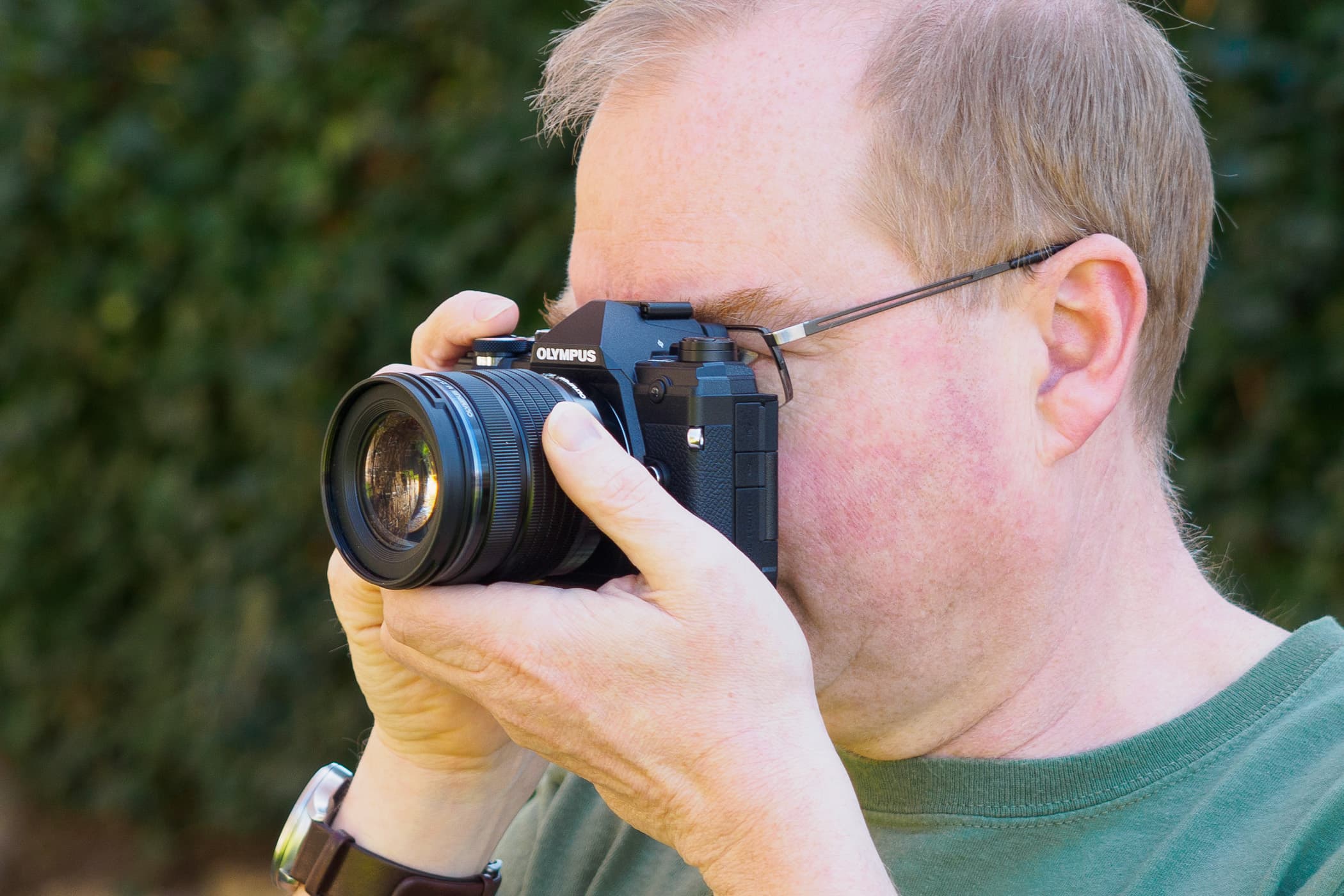 The Olympus 12-45mm F4 Pro handles well on the E-M5 III, despite its tiny size

With its compact size and light weight, the 12-45mm is a perfect complement to Olympus’s smaller cameras such as the E-M10 and E-M5 series. Its Micro Four Thirds mount means it’ll also fit onto Panasonic cameras, and should work very nicely with the likes of the G80, G90 and GX9. But as it doesn’t include optical stabilisation, it’s not such a great match to older or smaller bodies that aren’t equipped with in-body stabilisation.

When the original OM-D E-M5 appeared in 2012, its kit zoom was the M.Zuiko Digital ED 12-50mm F3.5-6.3 EZ. This lightweight, versatile, weather-sealed optic featured an unusual switchable manual/electronic zoom and a dedicated macro setting, but it was optically mediocre. 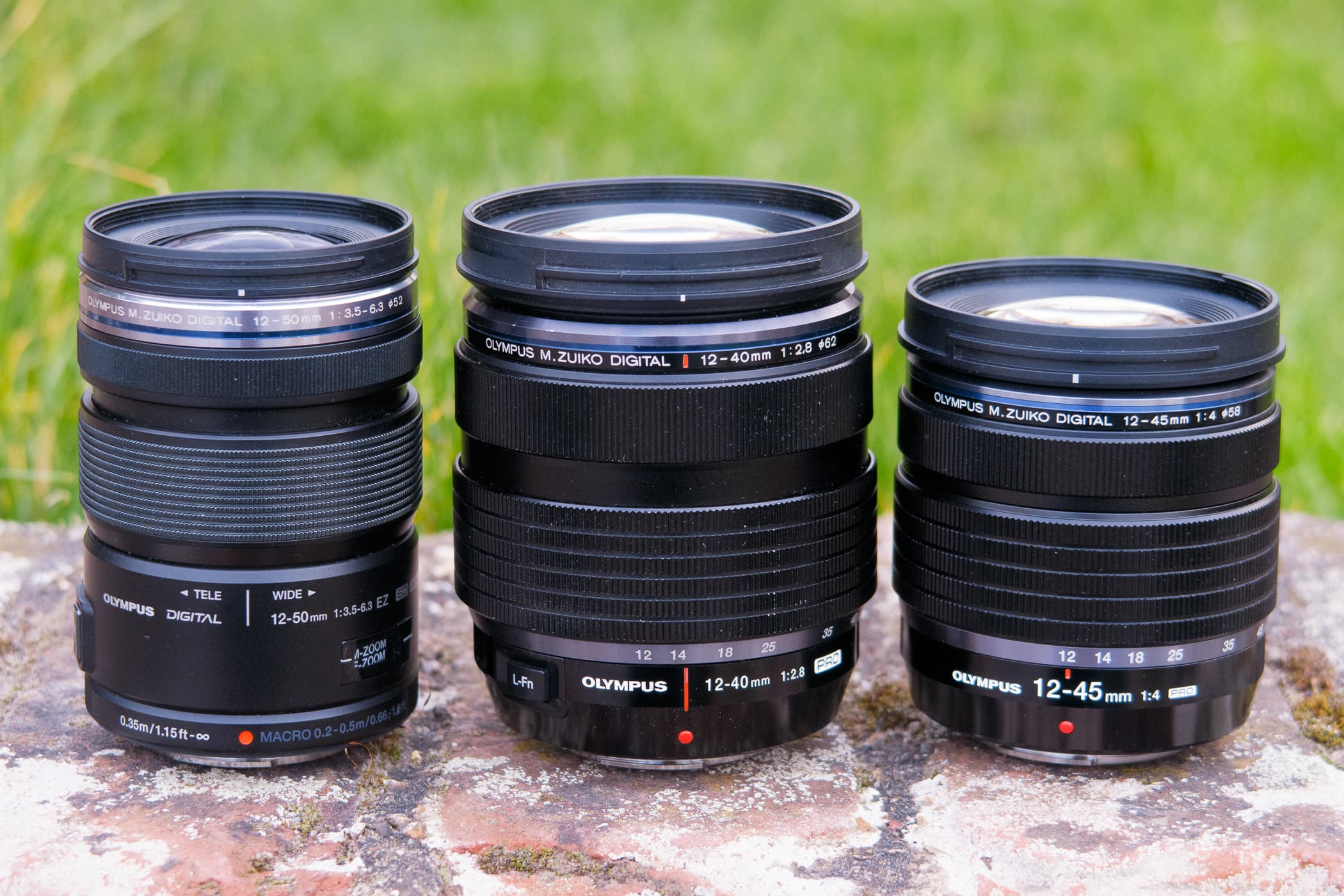 Thankfully Olympus users didn’t have to wait too long for the stellar 12-40mm f/2.8, which became the natural fit to the E-M5 Mark II. But while not exactly large, it’s almost twice the weight of the 12-50mm. 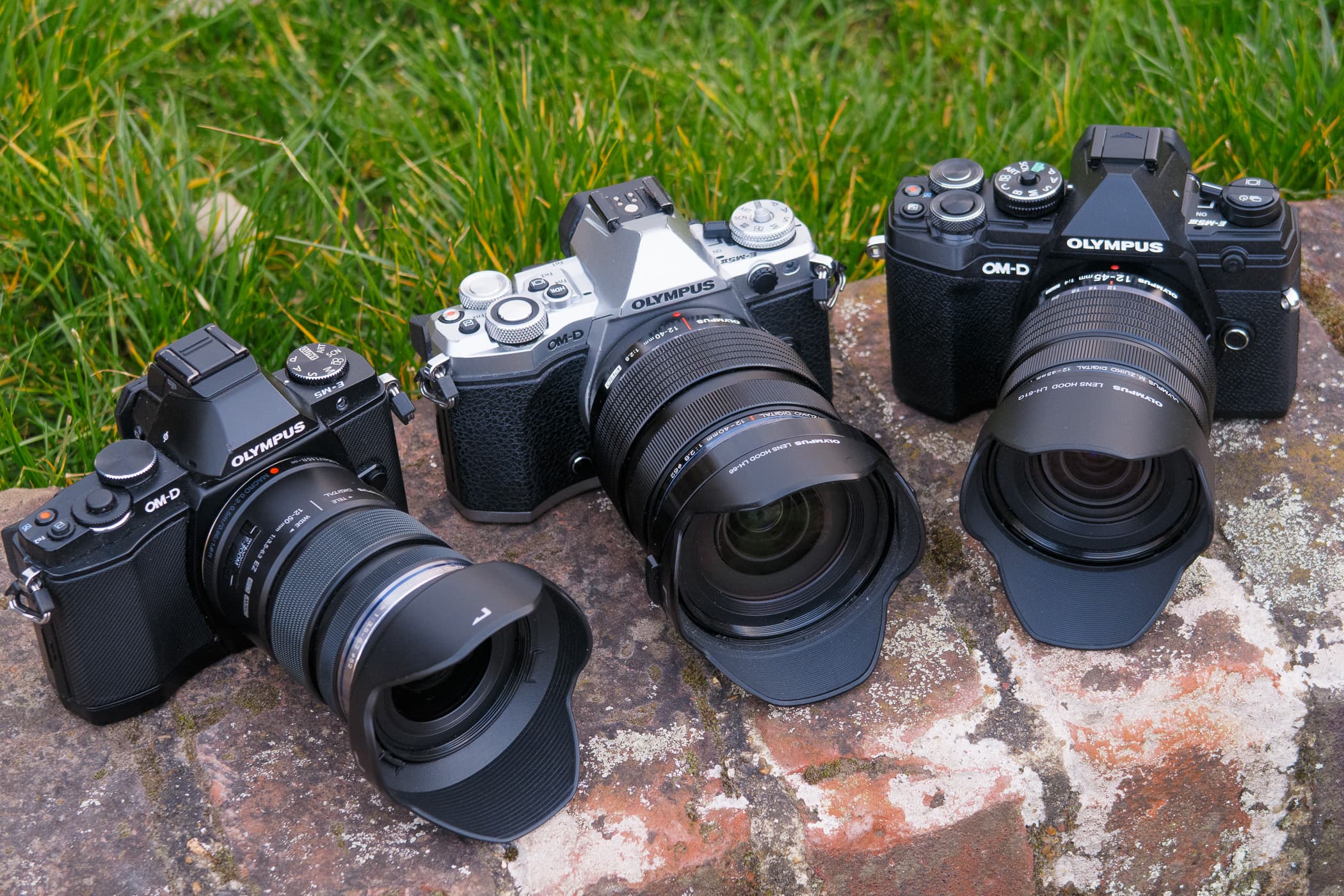 Turning our attention to focusing, it quickly becomes apparent that the 12-45mm f/4 is pretty much beyond reproach. Tested with a range of cameras from both Olympus and Panasonic, it snaps into focus instantly and silently, with all the accuracy that you’d expect from on-sensor AF. It’s especially impressive on the phase-detection equipped E-M5 Mark III. 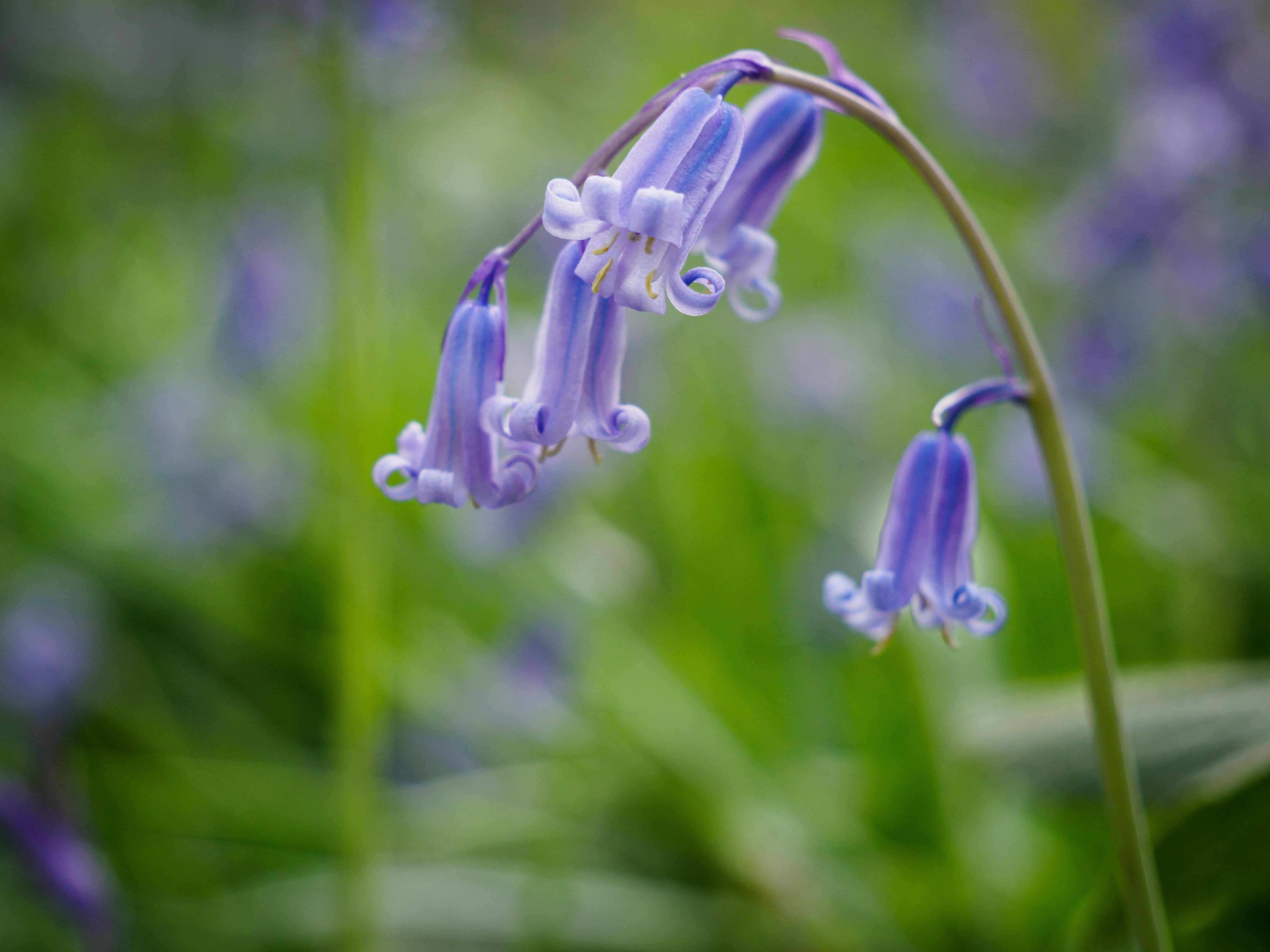 Manual focus offers an excellent experience, too. Rotating the focus ring can automatically engage your preferred focus aid, such as peaking or magnified view, and its smooth action makes precise focusing a breeze. As a result, I never really missed having a manual focus clutch.

Given its close relationship to the 12-40mm f/2.8, I had high expectations for the 12-45mm f/4. Thankfully, it doesn’t disappoint. The coronavirus pandemic has prevented us from doing our usual studio-based tests, so this review is based on detailed examination of a wide range of images, from both controlled tests and real-world shooting. This reveals that the 12-45mm hasn’t just inherited its larger-aperture sibling’s looks and optics, but also its stellar image quality. In essence, it delivers near-flawless results no matter what you ask of it. 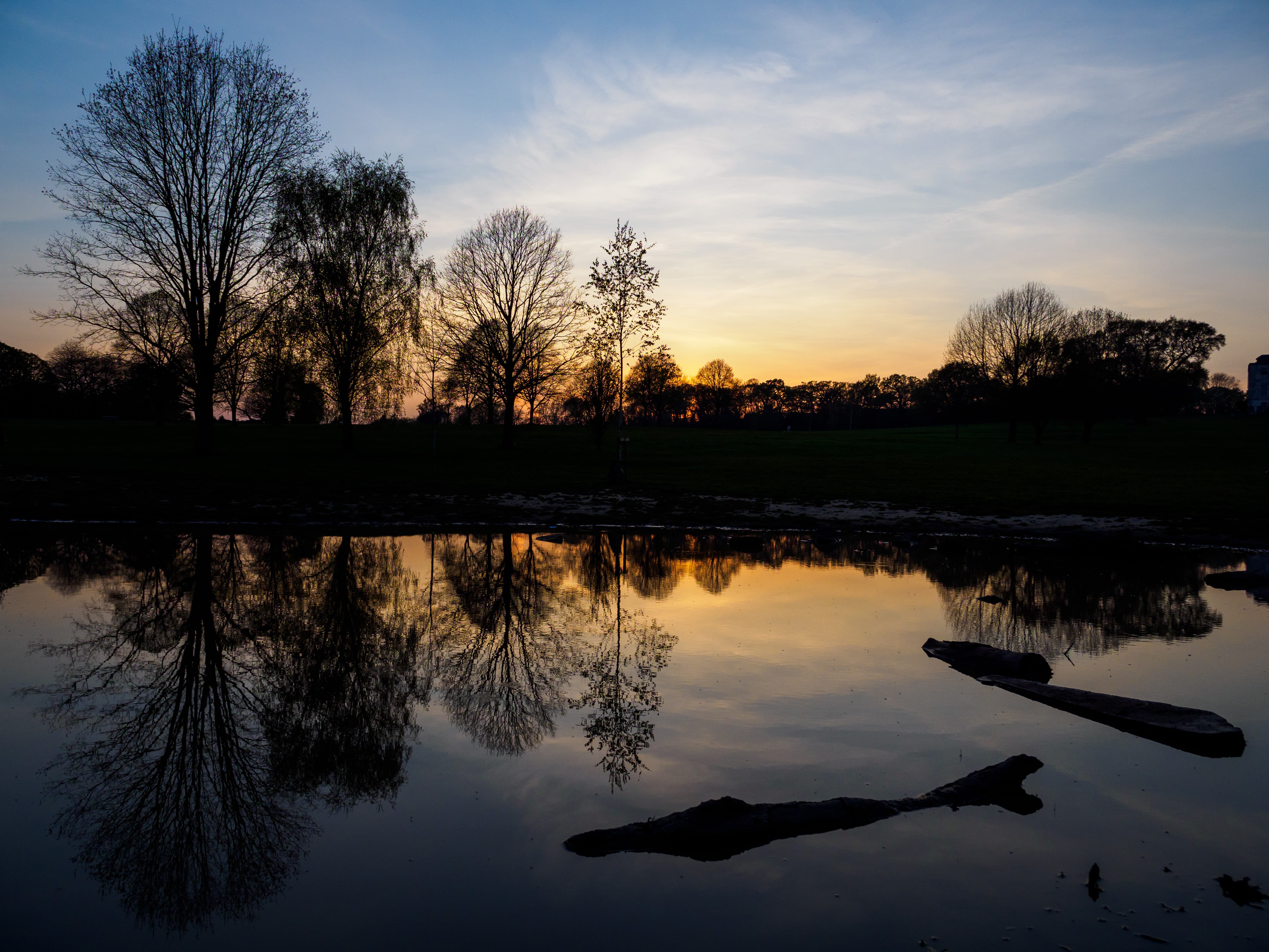 Tested on the 20MP E-M5 Mark III, the lens provides excellent sharpness from corner to corner. It gives near-indistinguishable results to the 12-40mm f/2.8 when comparing images shot side-by-side under controlled conditions, with the only discernable difference being that the 12-45mm suffers from just a little softening in the corners at 12mm f/4. But this is only visible when pixel peeping images at 100% on a computer screen, and shouldn’t be a problem in print. 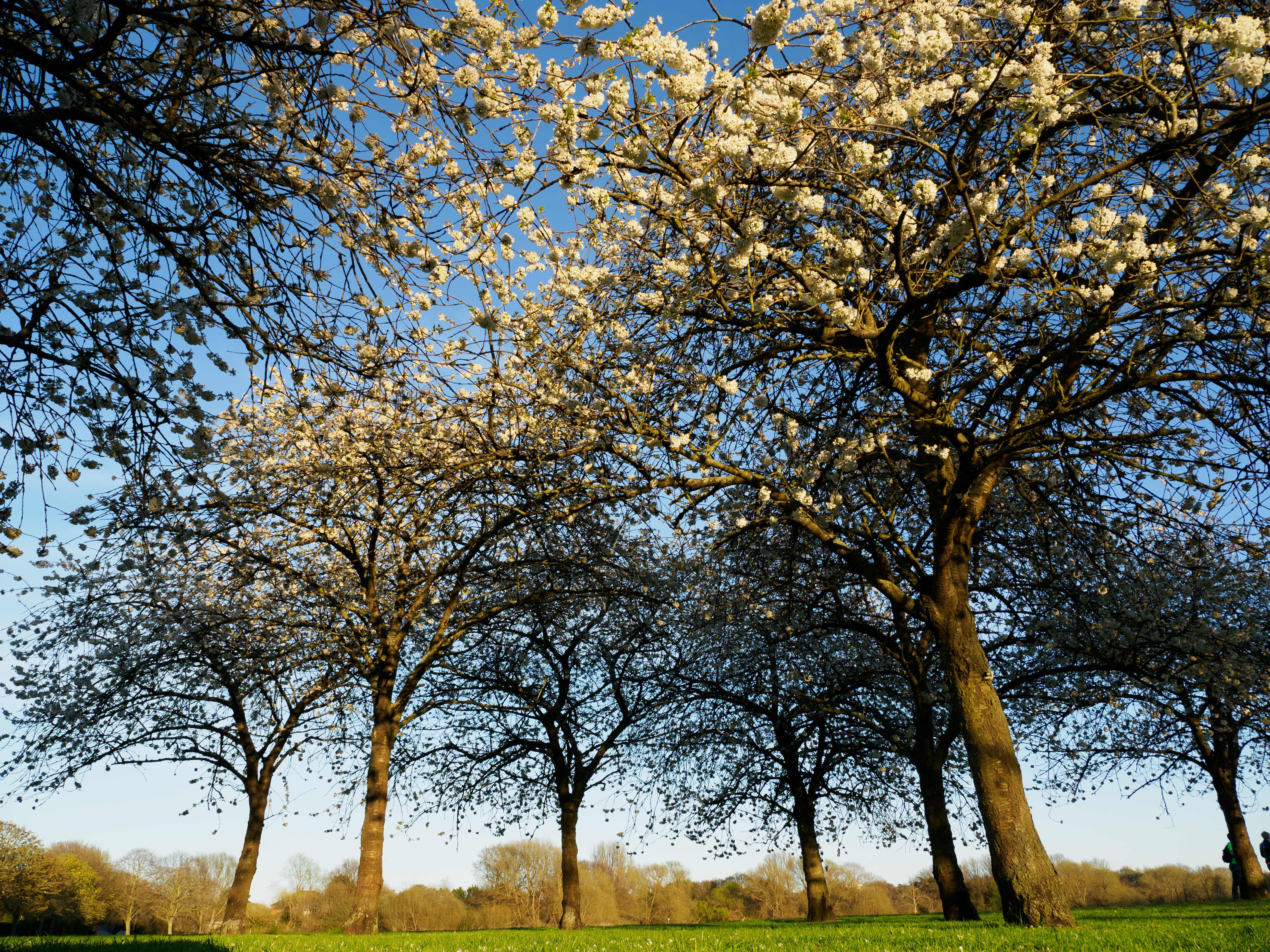 Overall, I’d happily shoot at any focal length and subject distance, and all apertures from f/4 down to about f/11. But I’d caution against stopping down further, as this always results in excessive diffraction softening on Micro Four Thirds. 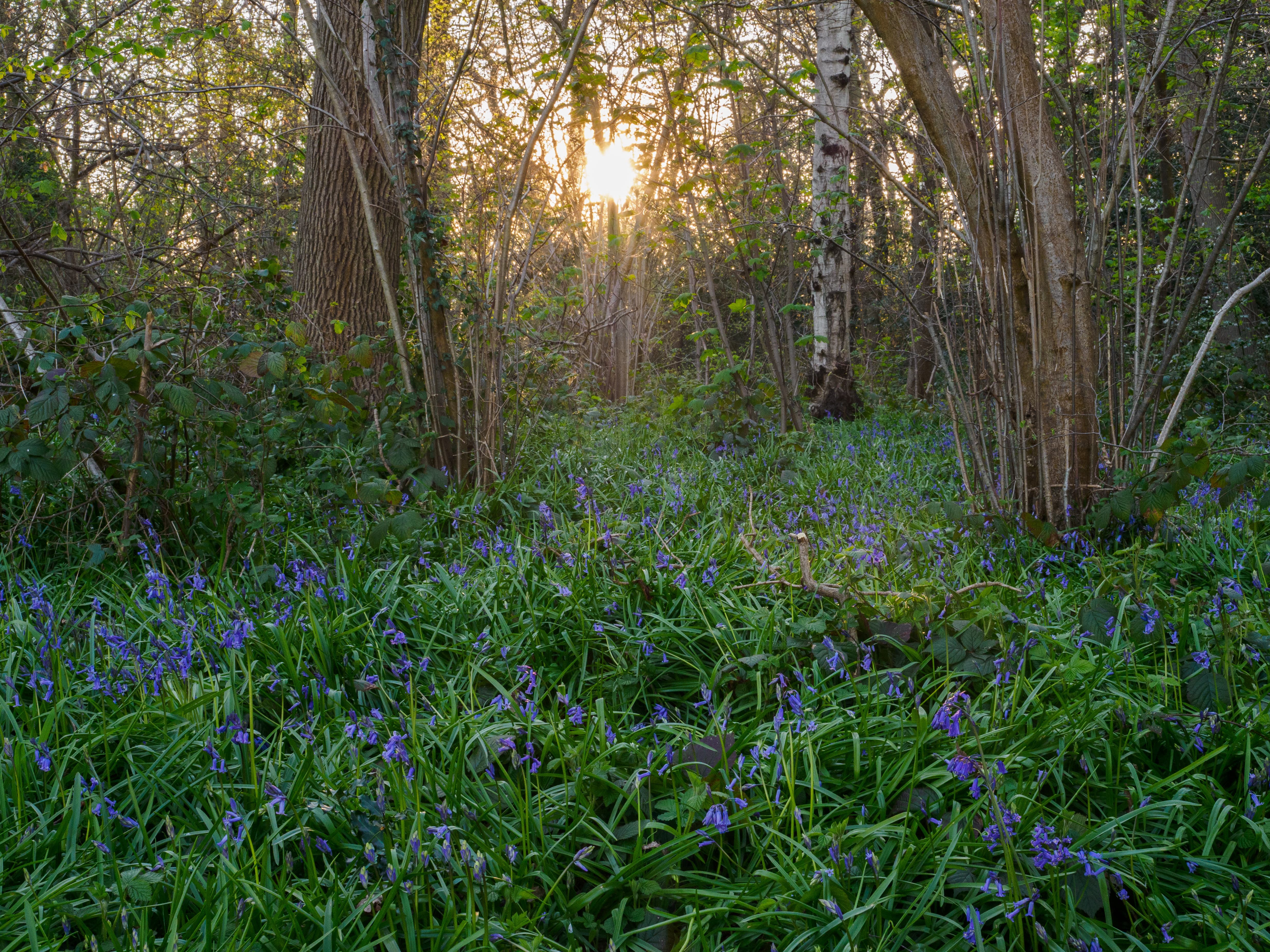 There’s little to worry about with regards to vignetting, and while some corner darkening can be discernible when shooting evenly toned subjects at 12mm and f/4, it’s not objectionable. Software correction of distortion and lateral chromatic aberration is integrated into Micro Four Thirds, and as a result, you’ll rarely see any colour fringing or bowing of straight lines along the edges of the frame. The only exception is when shooting close-ups at the wide end of the zoom, when some barrel distortion becomes apparent. But if you need such images to be geometrically accurate, simply back off from the subject and zoom in. 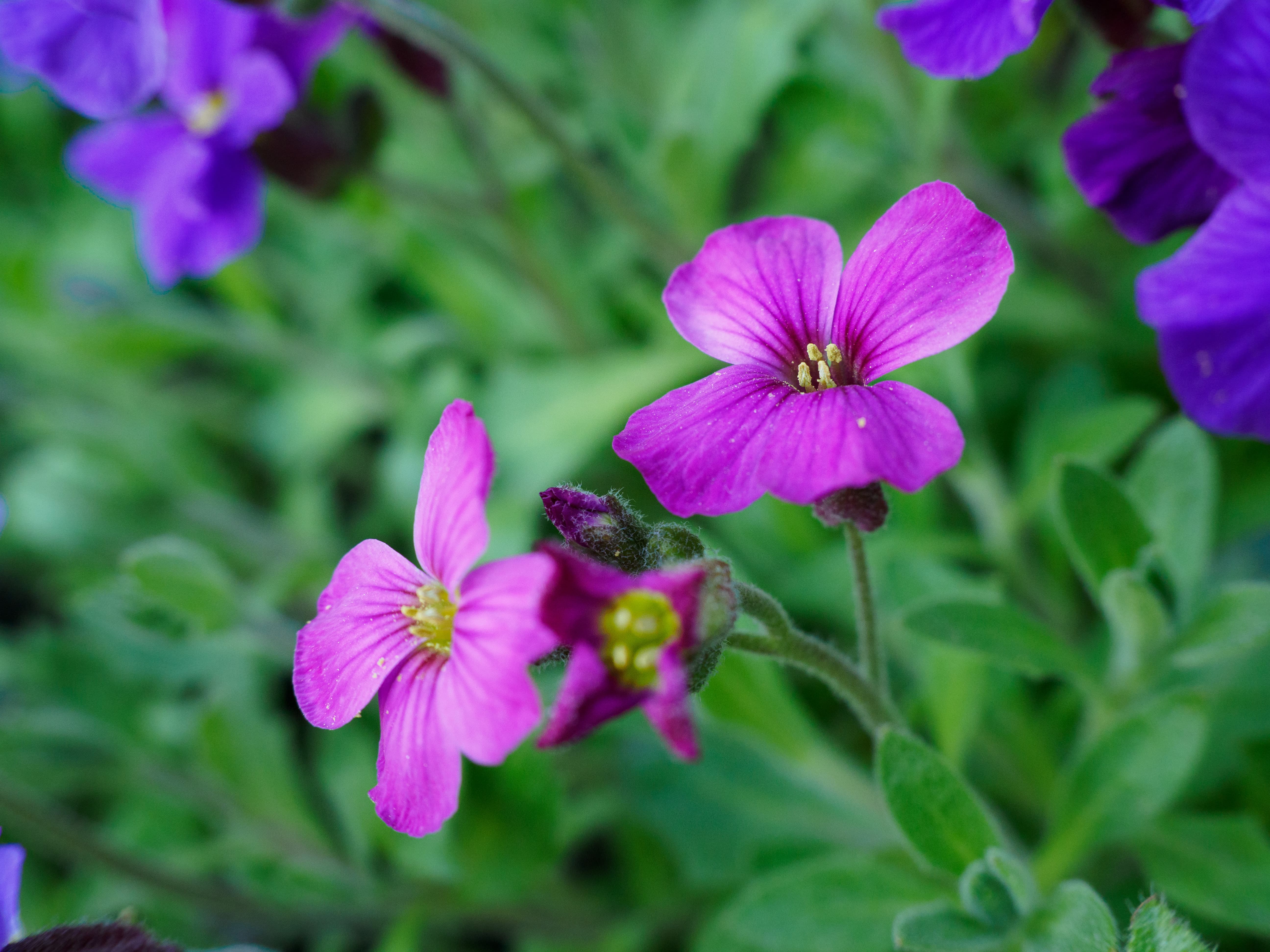 Close-up shooting is of course this lens’s party trick, and one at which it excels. Its impressive minimum focus distance across the entire zoom allows a wide range of creative looks, from expansive backgrounds at wideangle to tighter framing at telephoto. 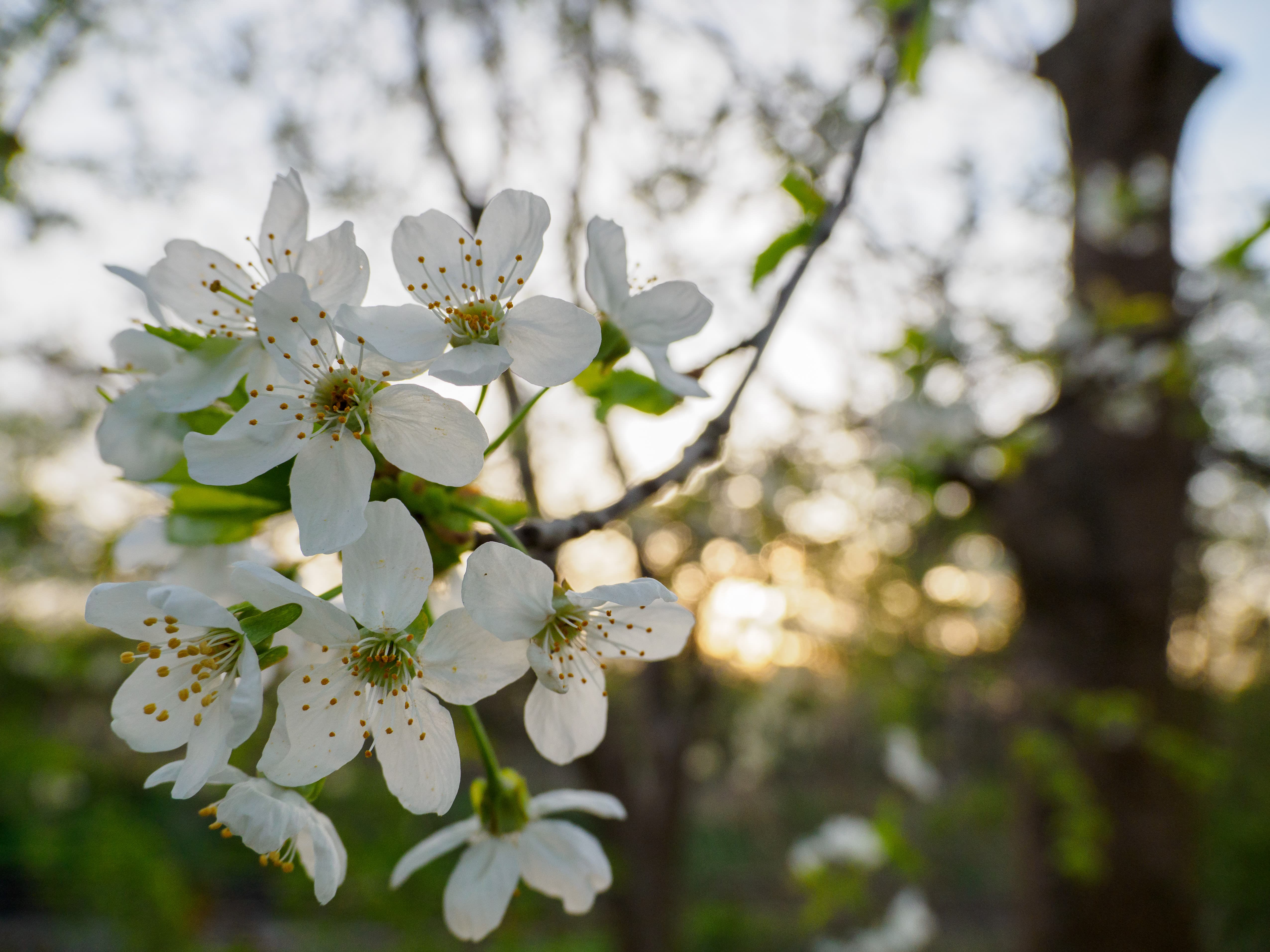 The main practical limitation arises at wideangle, where the working distance to the subject is just a few millimetres from the front element, which makes it difficult to avoid getting in your own light. But again, image quality is really good, and if you shoot wide open at 45mm, it’s also possible to get some very attractive-looking background blur. 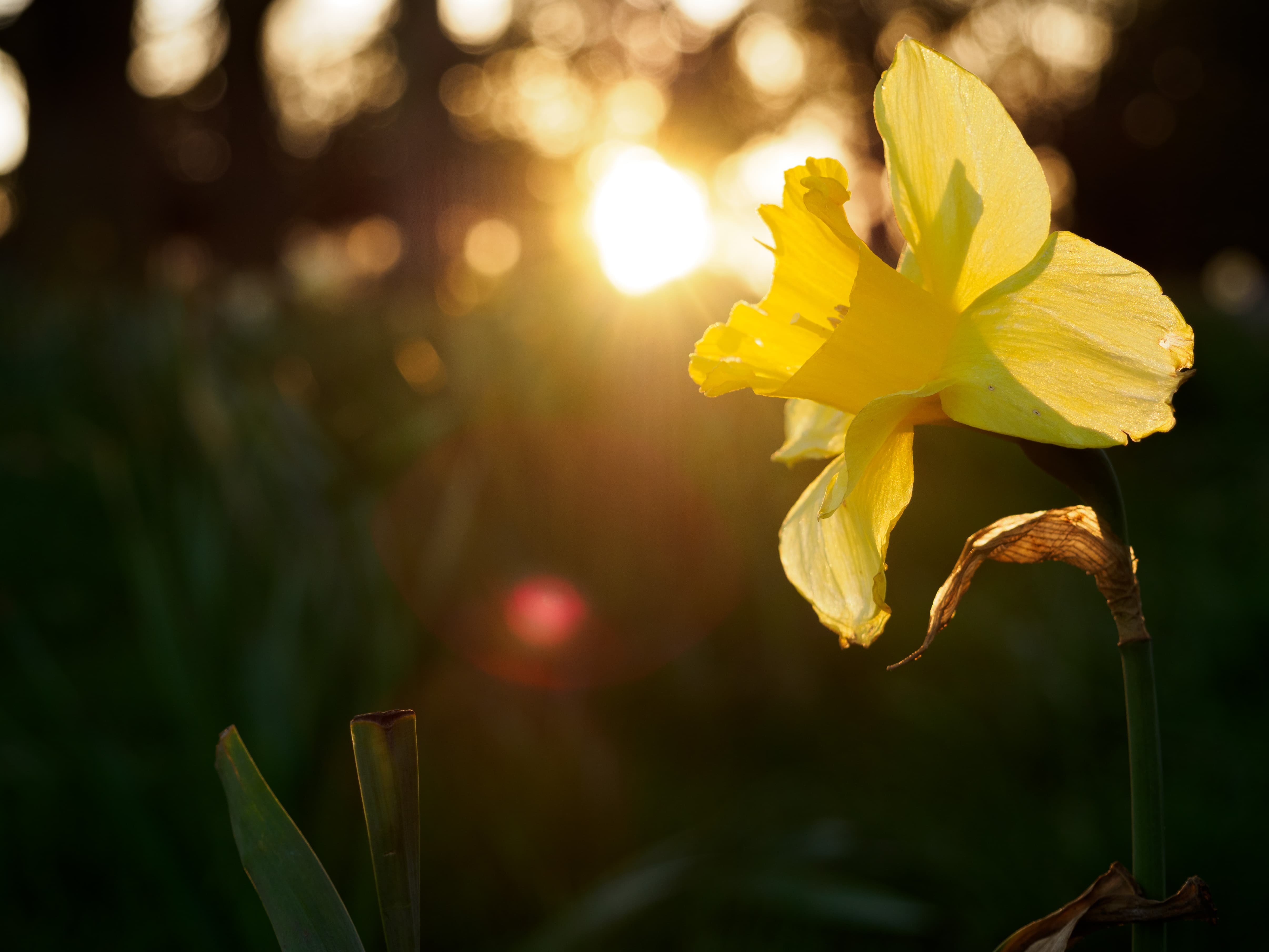 About the only point of concern is flare when shooting directly into the sun, which can result in loss of contrast and red internal reflection patterns. But you can see this live in the viewfinder when you’re shooting, which can help you to suppress it by such means as tweaking the composition or stopping down the aperture.

With the 12-45mm f/4, Olympus has made a stunning small, lightweight standard zoom that’s a more affordable, but equally fine alternative to the 12-40mm f/2.8. It provides a rare combination of ruggedness, portability, and superb image quality, particularly when used in combination with the OM-D E-M5 Mark III. Its remarkable macro capability is the icing on the cake, bringing an extra layer of creativity. 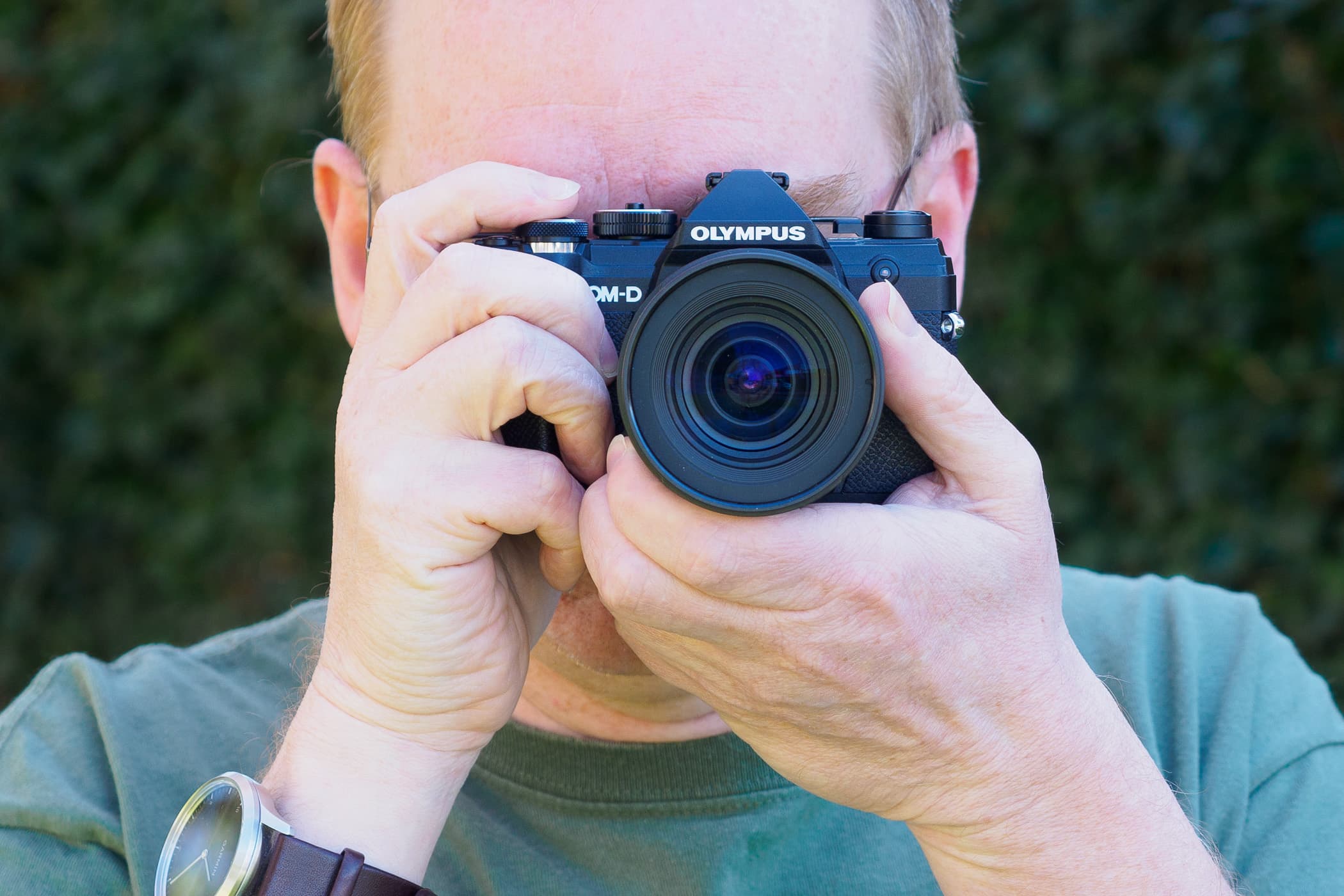 There’s a lot of focus right now on the image quality advantages of larger sensors, but let’s not forget that lenses are an equally important part of the equation, and it’s easier to make top-notch optics for smaller sensors. As a result, you’ll struggle to find another lens quite like this for any other system. 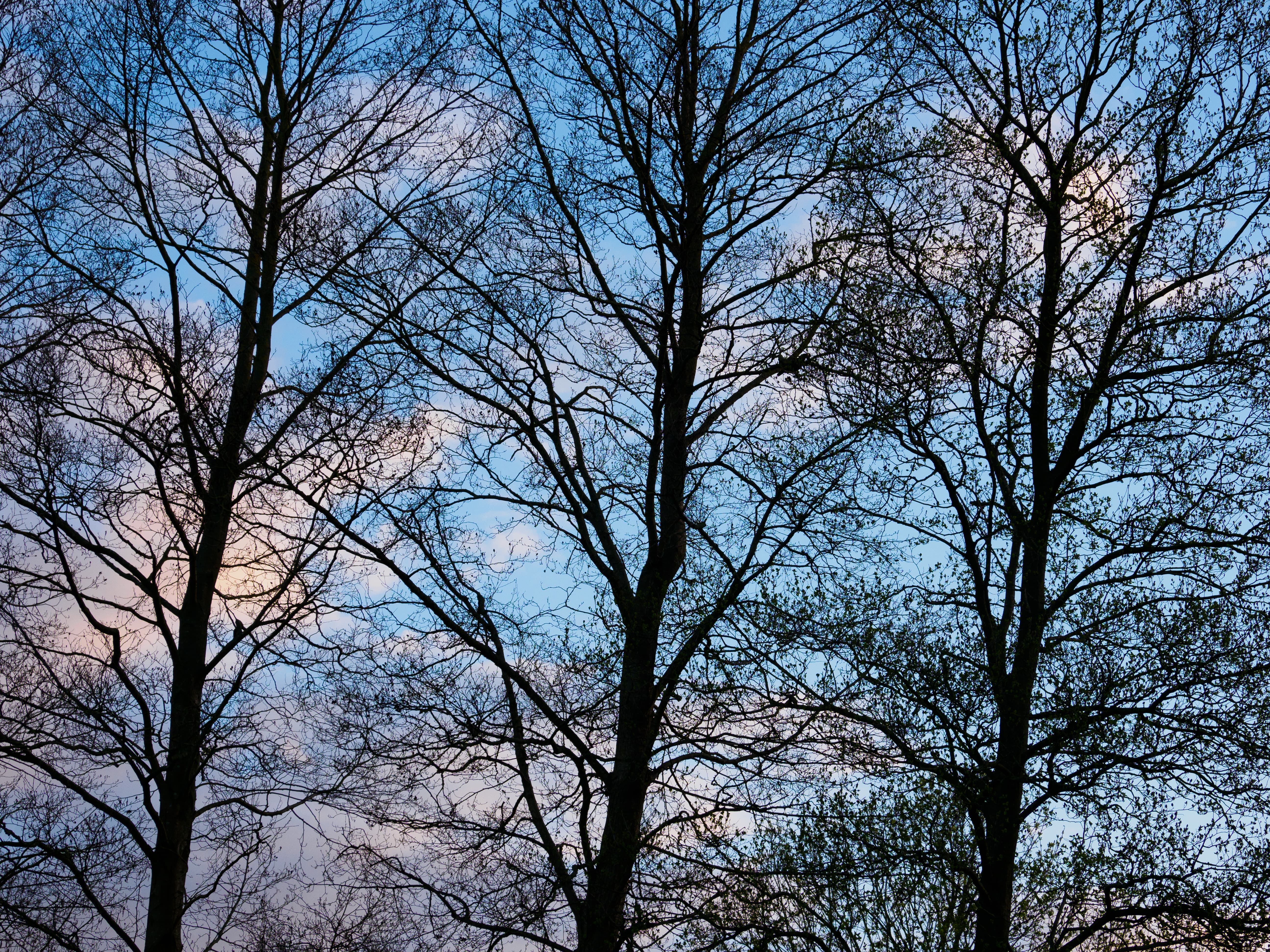 Probably the lens’s biggest limitation is its f/4 maximum aperture, which affords precious little scope for selective focus effects or manipulating depth of field. If this is important to you, the 12-40mm f/2.8 would be the better choice. Equally for Olympus users who already own and are happy with a 12-40mm f/2.8, there’s no obvious reason to change. However for Micro Four Thirds users who’d like to upgrade their kit lens without adding much bulk, or indeed DSLR users looking to downsize their kit, the 12-45mm f/4 is definitely one to shortlist.