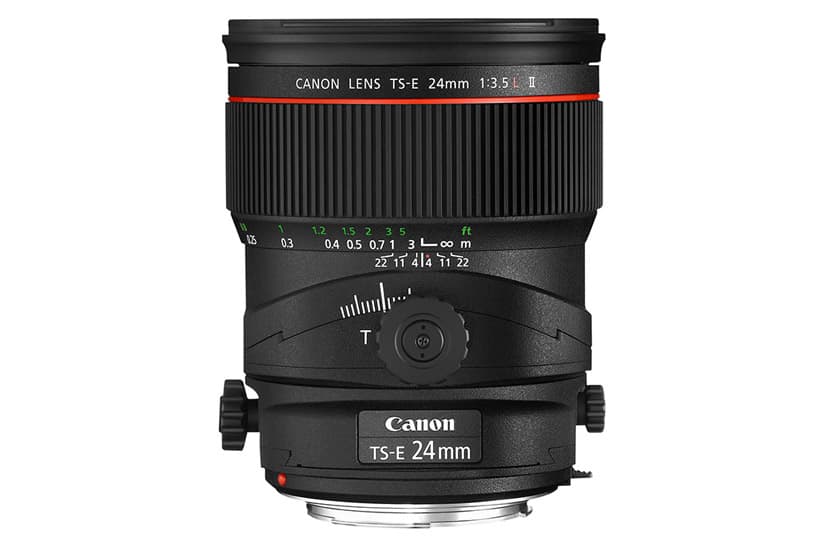 24mm wideangle lenses tend to be ideal for architectural exteriors, while wider optics are great for interiors.

Tilting the lens can be used to extend the depth of field without having to stop down the aperture, letting you use faster shutter speeds, and avoid diffraction. Alternatively it can provide a ‘fake miniature’ effect.

Shifting the lens upwards allows the camera back to be kept upright when shooting architecture, to eliminate converging verticals (buildings appearing smaller the further away they are).

Tilt-and-shift lenses allow the shift movement to be rotated relative to the camera, for switching between landscape- and portrait-format shooting.

The majority of tilt-shift lenses are made by Canon and Nikon, for their DSLR cameras, however, these can be used on mirrorless cameras, with an appropriate adapter. There are also options from other companies such as Laowa and Samyang. 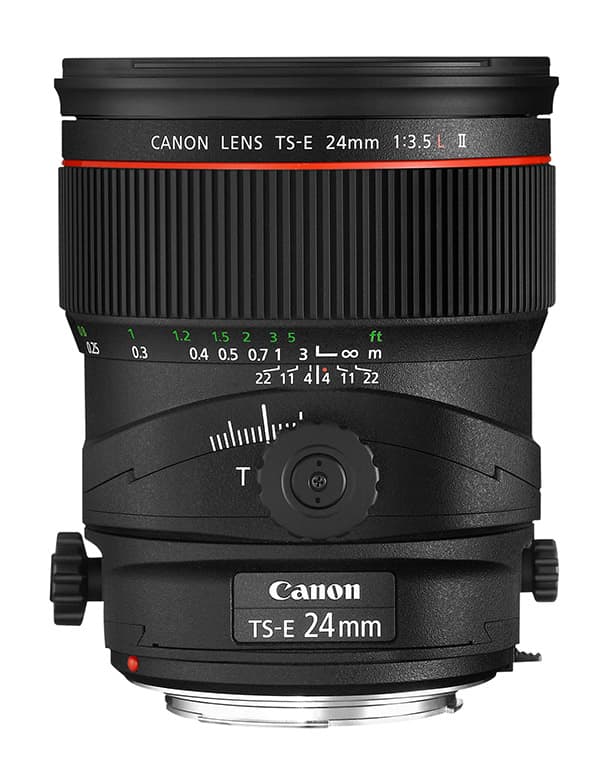 Of these, the Canon TS-E 24mm f/3.5L II is the ‘go-to’ lens for architecture photography because its angle of view is suitable for photographing large buildings without having to go too far back. It enables up to +/-8.5° and +/-12mm shift, plus +/-90° rotation is available for each movement independently. It’s supplied with a large bowl-shaped hood and accepts 82mm filters.

Thanks to its ‘normal’ field of view, the TS-E 50mm F2.8L Macro also holds appeal, but naturally, you have to step further away from a building to get it all in the frame compared to the 24mm lens. However, it also has a closest focusing distance of 27.3cm at which it gives half life-size reproduction, making it attractive for product photography as well as architecture.

Meanwhile, the TS-E 17mm f/4L is useful for photographing skyscrapers and cramped interiors. Its tilt movement is more limited than the 24mm lens at +/-6.5°, but the shift is the same at 12mm and there’s independent rotation available for each to +/-90°.

Thanks to their longer focal lengths, the TS-E 90mm F2.8L Macro and TS-E 135mm F4L Macro are more suited to macro, product and portrait photography than architecture. 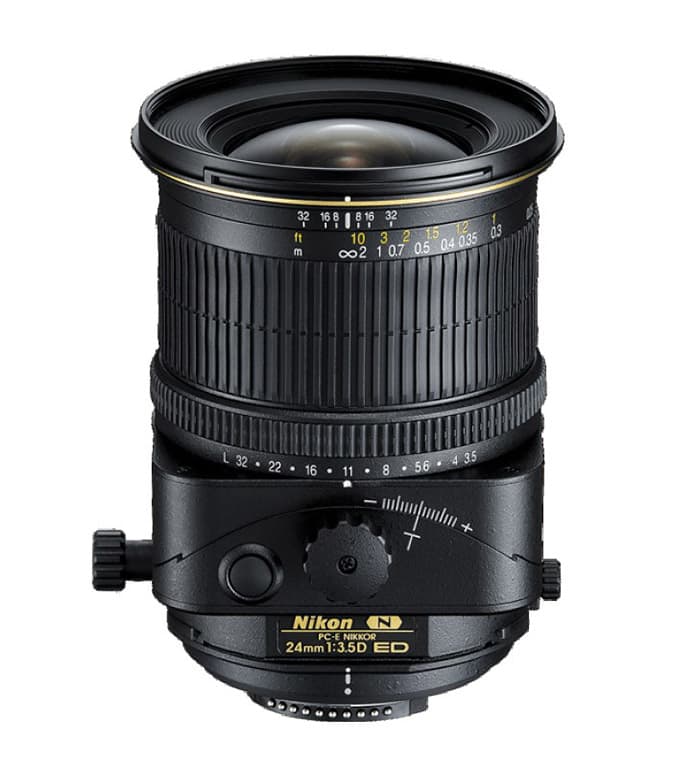 Again, the 24mm focal length of the Nikon PC-E 24mm F3.5D ED makes it an appealing option for architectural photography. It can tilt by up to +/-8.5° and shift by 11.5mm, plus there’s up to +/-90° rotation available, allowing the correction of converging verticals with either portrait or landscape format images. Helpfully, it comes supplied with a lens hood and has a thread for 77mm filters.

Nikon’s PC-E 19mm f/4E ED is useful for photographing very tall buildings or tight spaces indoors. It’s the only Nikon PC-E lens that has a dual rotation mechanism to enable the axis of the tilt function to be altered relative to the shift on a shot-by-shot basis.

However being an E-type lens, it lacks a mechanical aperture ring. If you want a tilt-shift lens with a ‘normal’ field of view, there’s the PC-E Micro 45mm f/2.8D ED. It has a closest focusing distance of 25.3cm which delivers the maximum reproduction ratio of 1:2, or half-size, making it useful for product and still-life photography. Meanwhile the PC-E Micro 85mm f/2.8D is ideal for portraits and product shots, but it doesn’t come cheap. 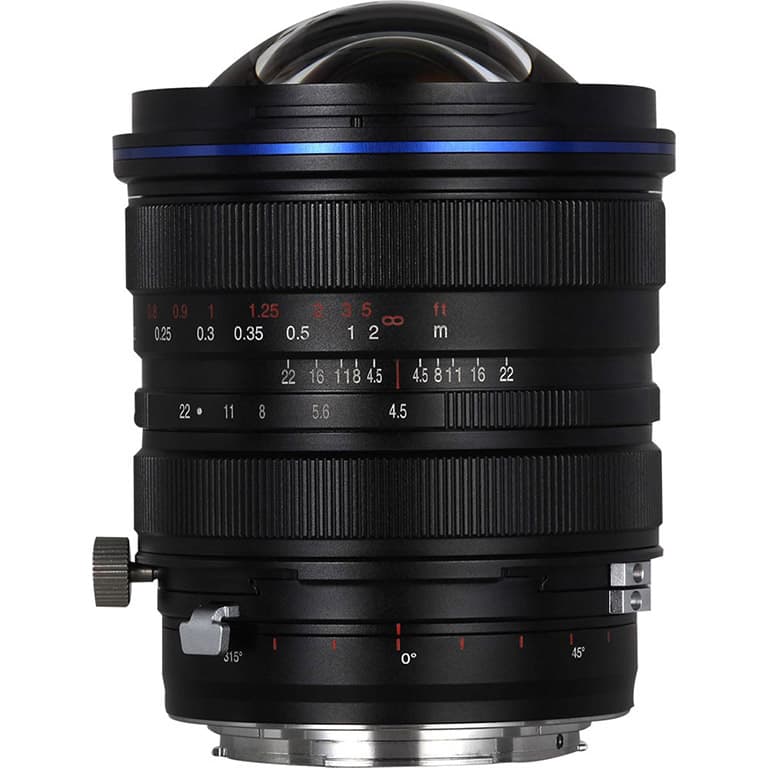 However, there’s no tilt movement available, just shift of up to 11mm with 360° rotation. The 15mm F4.5 Zero-D Shift produces a 65mm-diameter image circle which means that in theory it can be used on medium format cameras like the Fujifilm GFX100S. As yet it’s not available with the GF mount, but the Canon EF and Nikon F versions can be fitted onto GFX cameras via the requisite mount adapters.

There’s also the Laowa 15mm F4 Wide Angle Macro (£449-£499) for Canon EF, Nikon F, Pentax K and Sony FE mounts. This is an unusual 1:1 macro lens that works on full-frame cameras, but which also has a +/-6mm shift feature available for use with APS-C format cameras.

Finally, there’s the Laowa Magic Shift Converter (£299) which is essentially a 1.4x teleconverter that enables Canon EF or Nikon F lenses to be used on Sony E-mount cameras with up to +/-10mm shift. It’s an interesting option, but you only get aperture control if the mounted lens has an aperture ring. It’s best suited for use with the £899 Laowa 12mm f/2.8 Zero-D lens, with which it makes a 17mm f/4 lens. 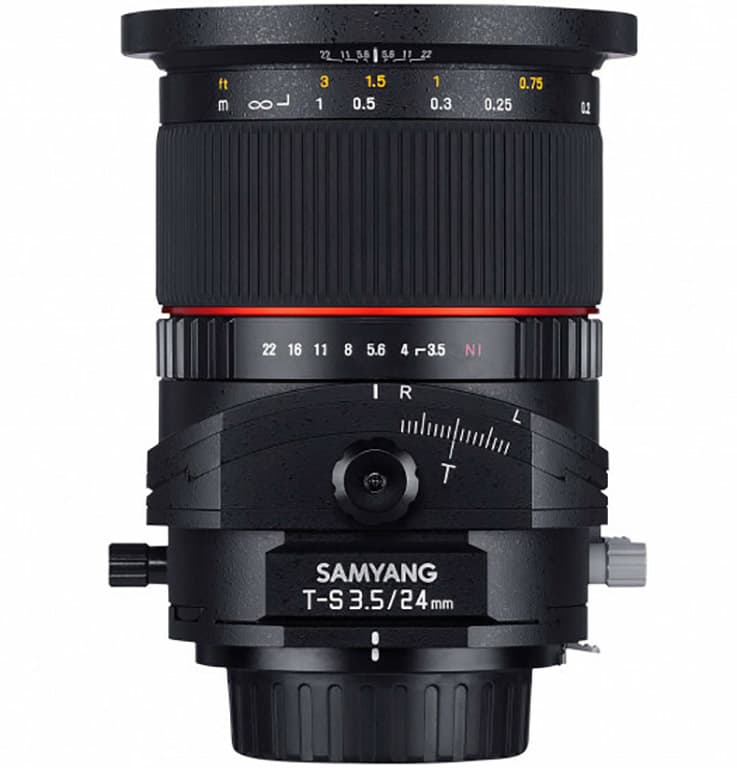 With a street price of about £689-£749 depending upon the mount, the Samyang T-S 24mm f/3.5 ED AS UMC is the most affordable tilt-shift lens on our list. At its optimum aperture settings of around f/5.6-f/11, it compares very well with its more expensive competitors in terms of sharpness, which makes it an interesting option for enthusiast photographers who wish to experiment with this type of lens.

However, while it offers a similar range of movements to its near-doppelgnger, the Canon TS-E 24mm f/3.5L II, it doesn’t share the same construction quality and smoothness of operation, meaning it’s not so well-suited for use by those who photograph buildings for a living.

It’s a full-frame optic with an architecture-friendly focal length of 24mm and it’s available in Canon EF, Nikon F, Pentax K, and Sony A or FE mounts. Whatever version you opt for, the aperture is set via a ring on the lens, with detents at half-stop intervals.

The lens doesn’t include any electronics to transmit focal length or aperture data to the camera, and like all the other tilt-shift lenses in this round-up, focusing is manual-only.

The tilt angle can be adjusted by up to +/-8.5° and there’s +/-12mm of shift available for correcting converging verticals. The direction of shift can be rotated by 90° for portrait-format shooting, while the tilt axis can also be rotated independently though 90°. The lens accepts 82mm diameter filters, but no hood is supplied.