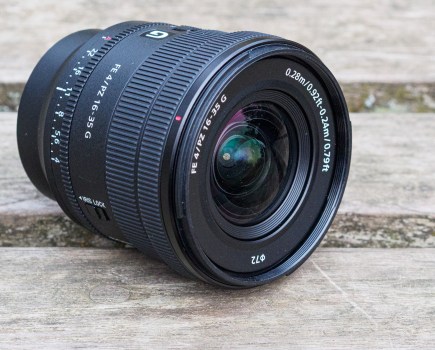 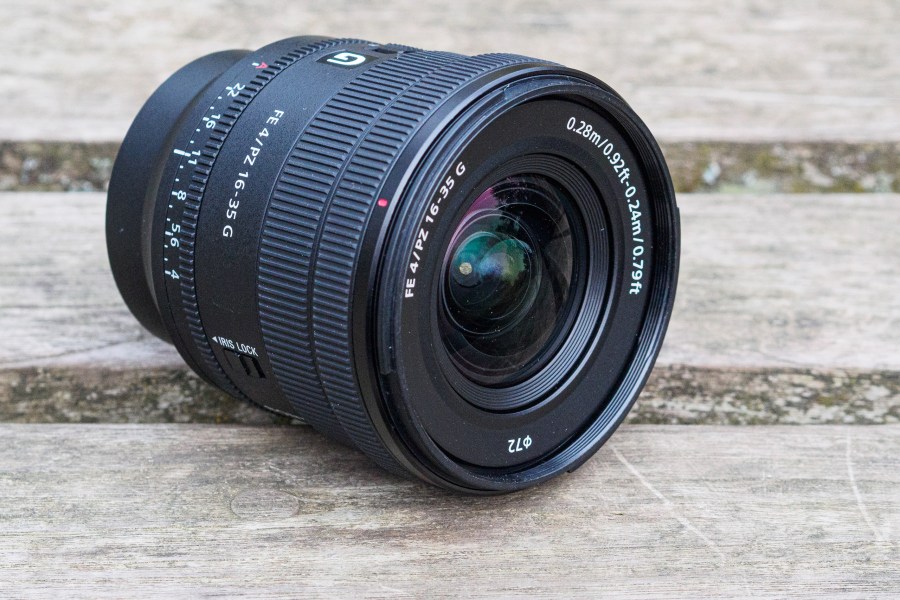 With a five-year lead over its rivals in building up its full-frame mirrorless system, and forty FE lenses now gracing its arsenal, Sony has the luxury of being able to revisit some older designs and experiment with new ideas. Its latest optic, the FE PZ 16-35mm F4 G, covers the same focal length and aperture range as the FE 16-35mm F4 ZA OSS from 2014. But strikingly, among several significant updates, it employs a power zoom design. While this will be welcomed by videographers, it will undoubtedly be viewed with trepidation by photographers. But fear not – it works brilliantly. 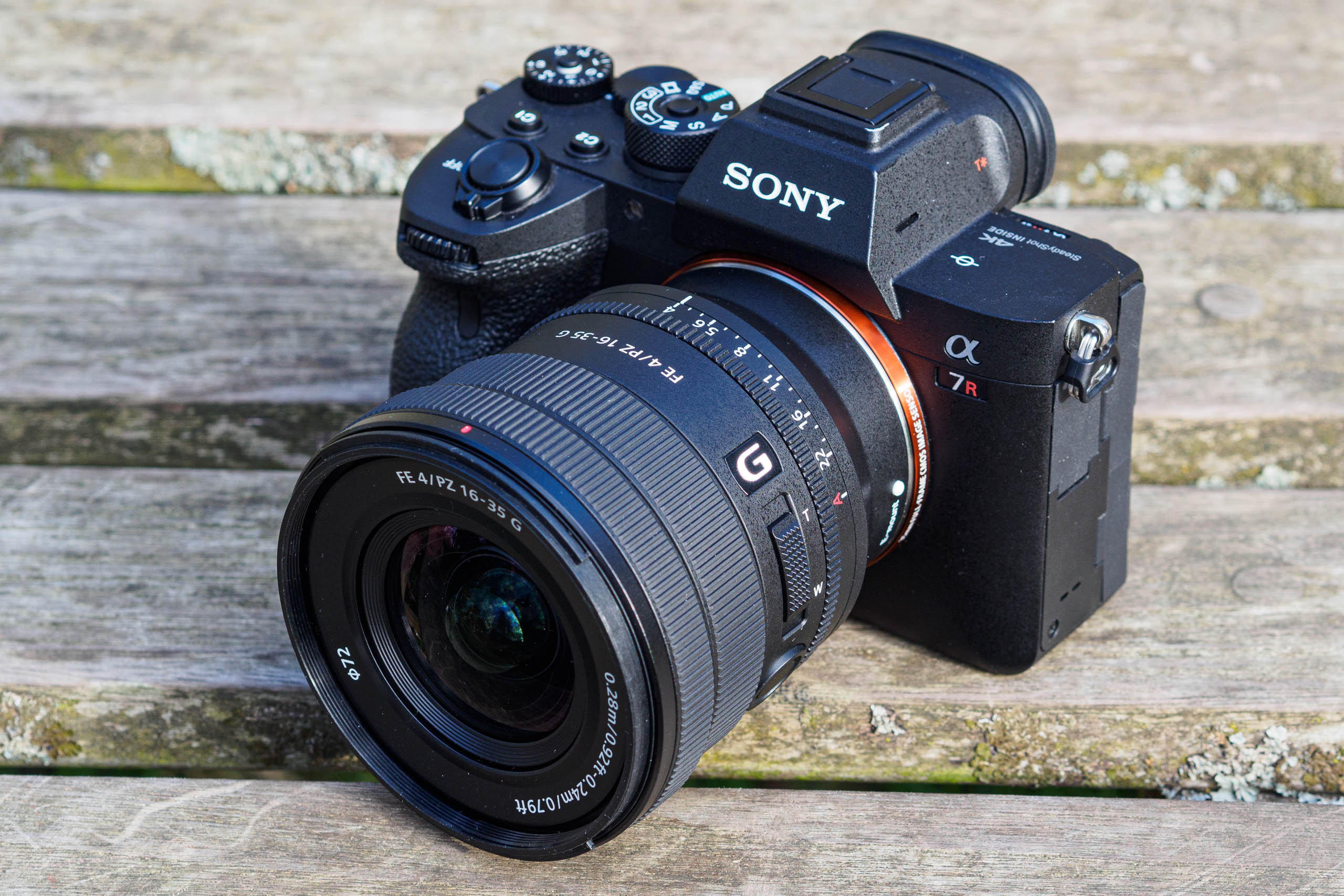 Probably the biggest attraction of power zooms is that they enable steady, controlled zooming during video recording. But the problem has all too often been that their zoom controls are frustratingly imprecise for composing still images. Sony has addressed this by using the same approach as for manual focusing, with a linear response zoom ring that provides precise, intuitive control. Then for video work, there’s a second, variable-speed zoom lever on the side of the barrel.

Another advantage of the power zoom design is that it enables the FE PZ 16-35mm F4 G to be smaller and lighter than its predecessor. It also boasts many more external controls, but in return, does without optical stabilisation. Its £1300 launch price represents a £150 premium over the older ZA optic, but is £450 more than the Tamron 17-28mm F/2.8 Di III RXD, which we rate very highly. So how does the FE PZ 16-35mm F4 G perform in real-world use?

Let’s take a look at what this new lens offers. It’s constructed using 13 elements in 12 groups, arranged into an optical design that both zooms and focuses internally. It also employs a healthy dose of exotic glass for good measure. Alongside two Advanced Aspherical elements that suppress field curvature and astigmatism, it employs one element each made from extra-low dispersion (ED) glass and Super ED glass a bid to minimise chromatic and spherical aberration. There’s also a conventional aspherical element, and another made from ED glass. 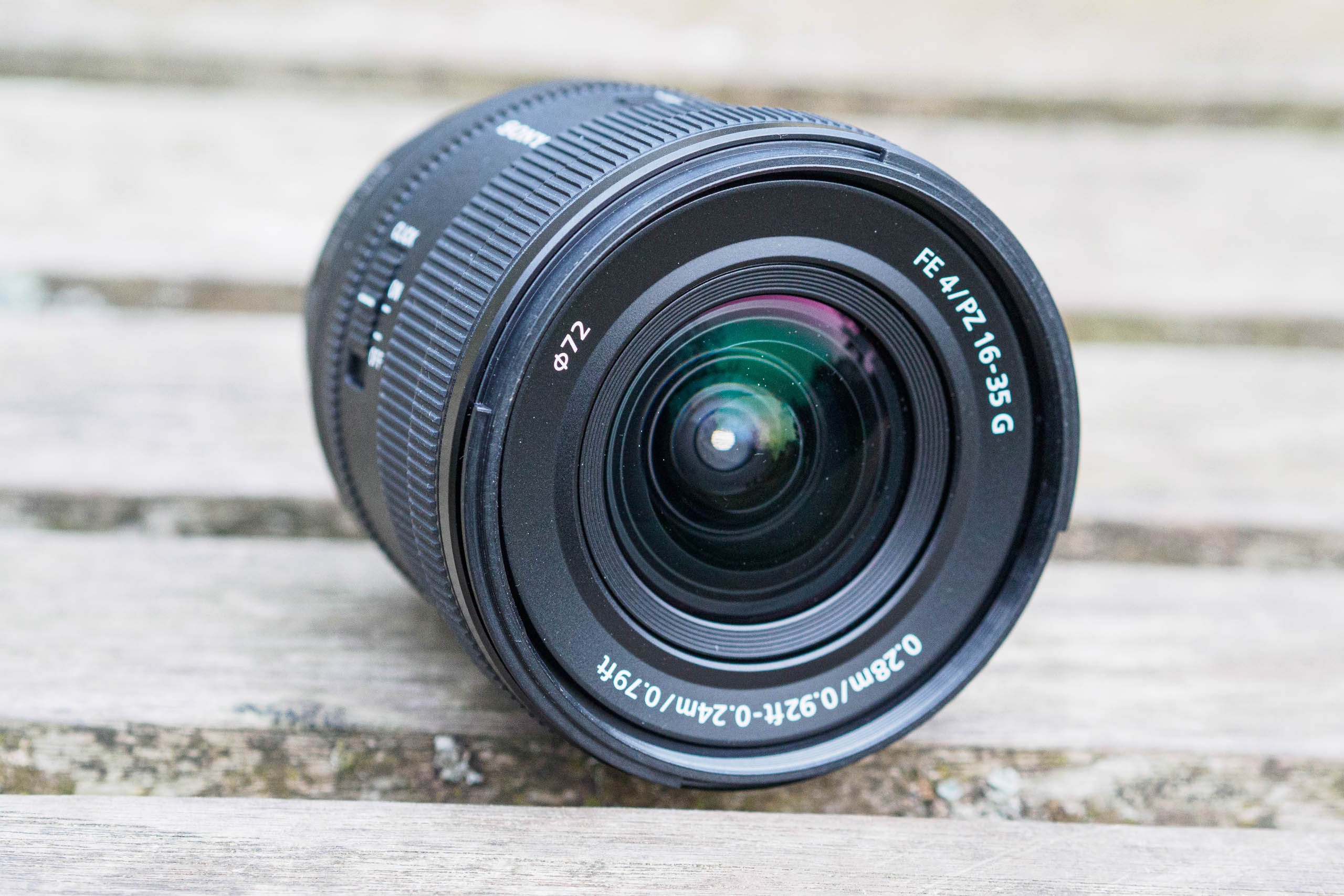 Compared to the older lens, the FE PZ 16-35mm F4 G gains an array of additional controls, in line with Sony’s recent design philosophy. Alongside the zoom and focus rings and power zoom lever, there’s an AF/MF switch, an AF stop button that can be programmed from the camera body, and an analogue aperture ring that can be set to either clicked or clickless operation. Both the zoom and focus mechanisms are controlled by pairs of silent and highly responsive XD linear motors. 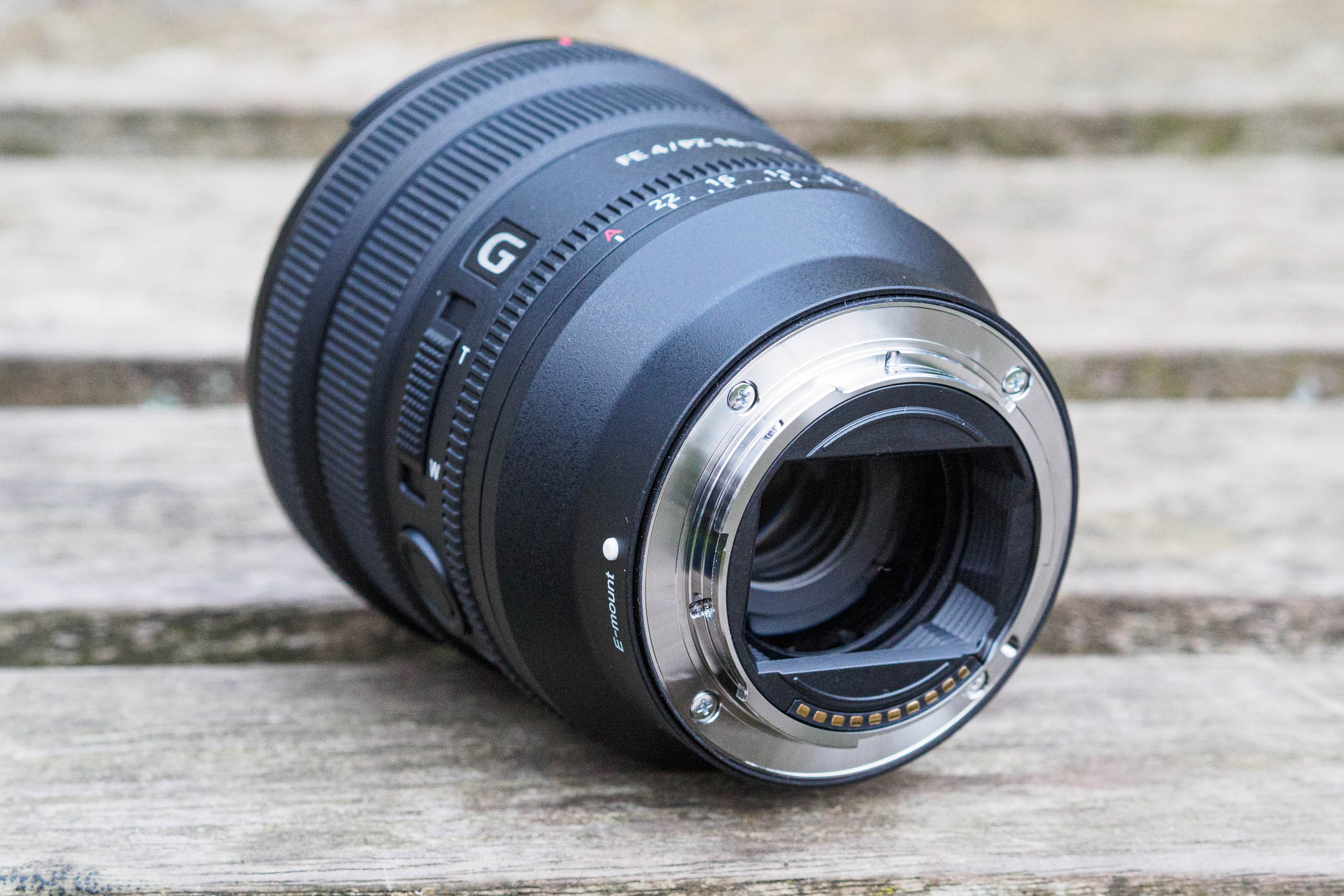 Sony has employed a 7-bladed aperture diaphragm, promising 14-ray sunstars that should please landscape shooters. They’ll also be grateful to hear that its lightweight plastic barrel boasts both dust- and splash-proof construction, and there’s a protective fluorine coating on the front element. 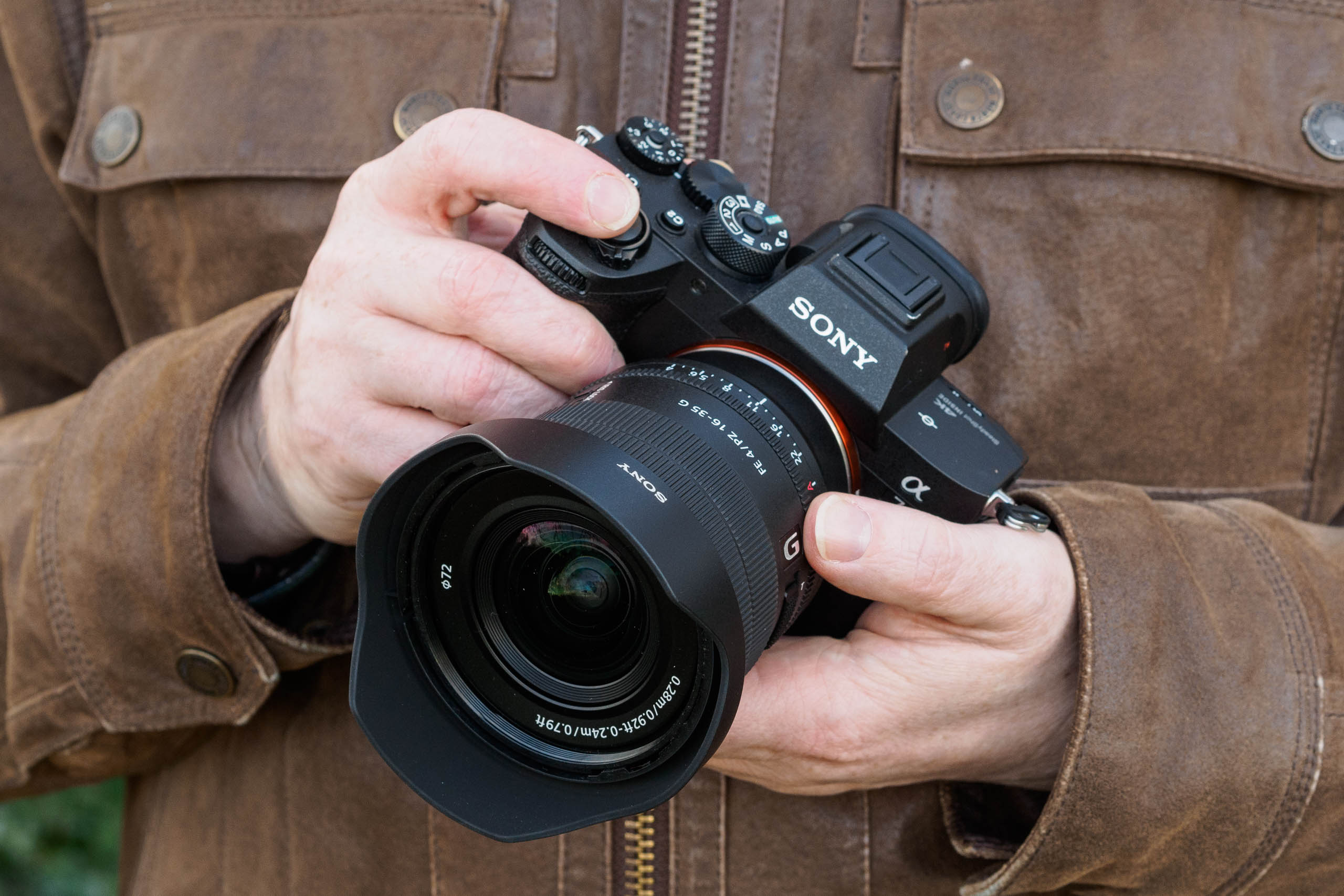 The minimum focus distance ranges between 28cm and 24cm, and filter users are catered for by a 72mm thread. A shallow plastic lens hood is supplied in the box and reverses for storage, in which position it blocks the focus ring but not the zoom ring.

One of the most striking differences between Sony’s two 16-35mm F4 designs comes in terms of bulk. At just 353g, the new lens is the lightest full-frame wideangle zoom available, saving fully 165g over its predecessor, and 67g over the Tamron 17-28mm f/2.8. Measuring 88mm long and 81mm in diameter, the new optic is also 11mm shorter than its rivals, although in practice, all will take up much the same space in a bag. 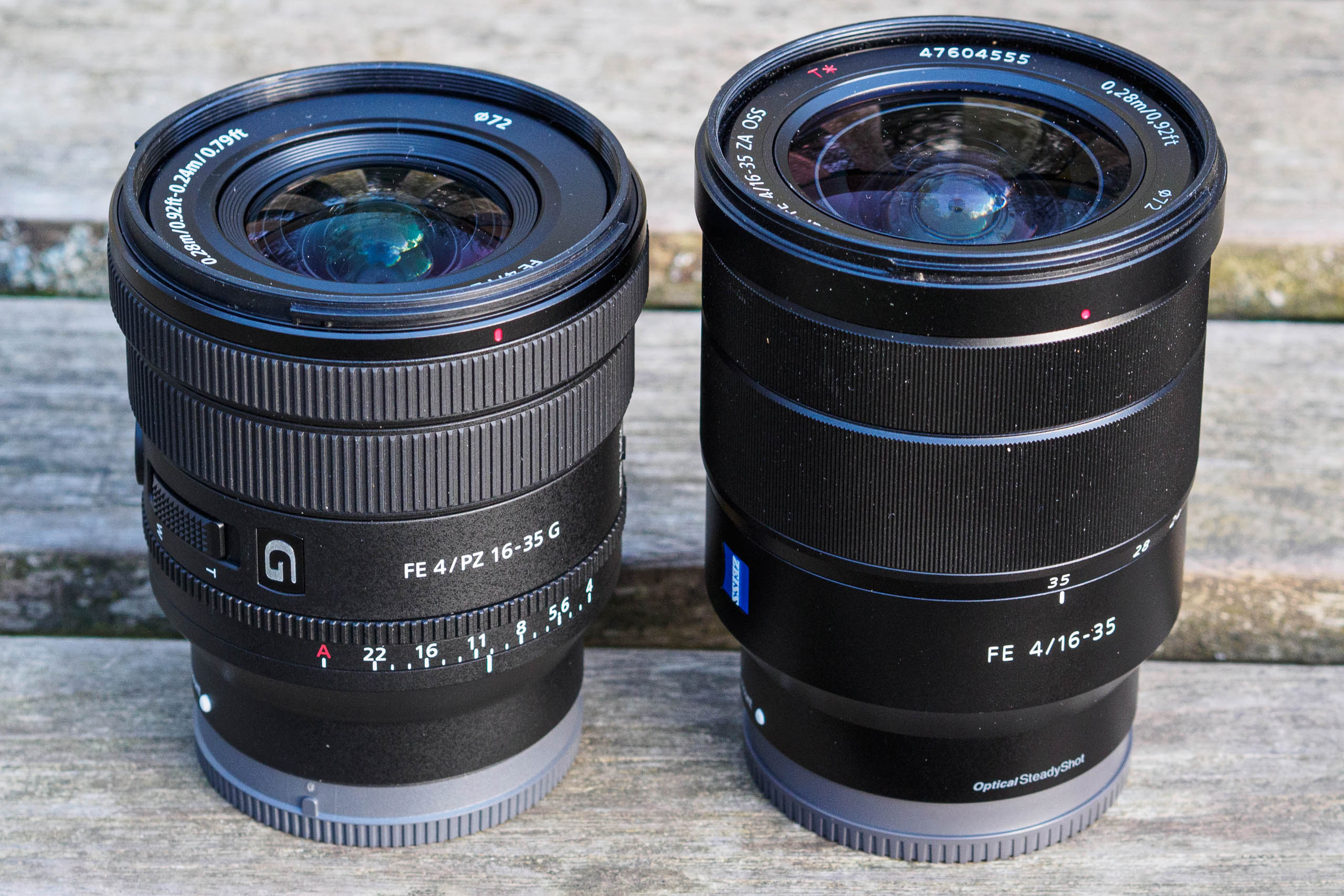 This light weight makes it an agreeable companion to Sony’s small Alpha 7-series cameras, including older models that have relatively small handgrips. The lens’s controls all fall nicely to hand, and the distinctly different diameters of the zoom and focus rings mean that they’re unlikely to be mistaken for each other. This is important as the two would otherwise feel very similar with the camera up to your eye, with the zoom ring offering just slightly greater resistance. 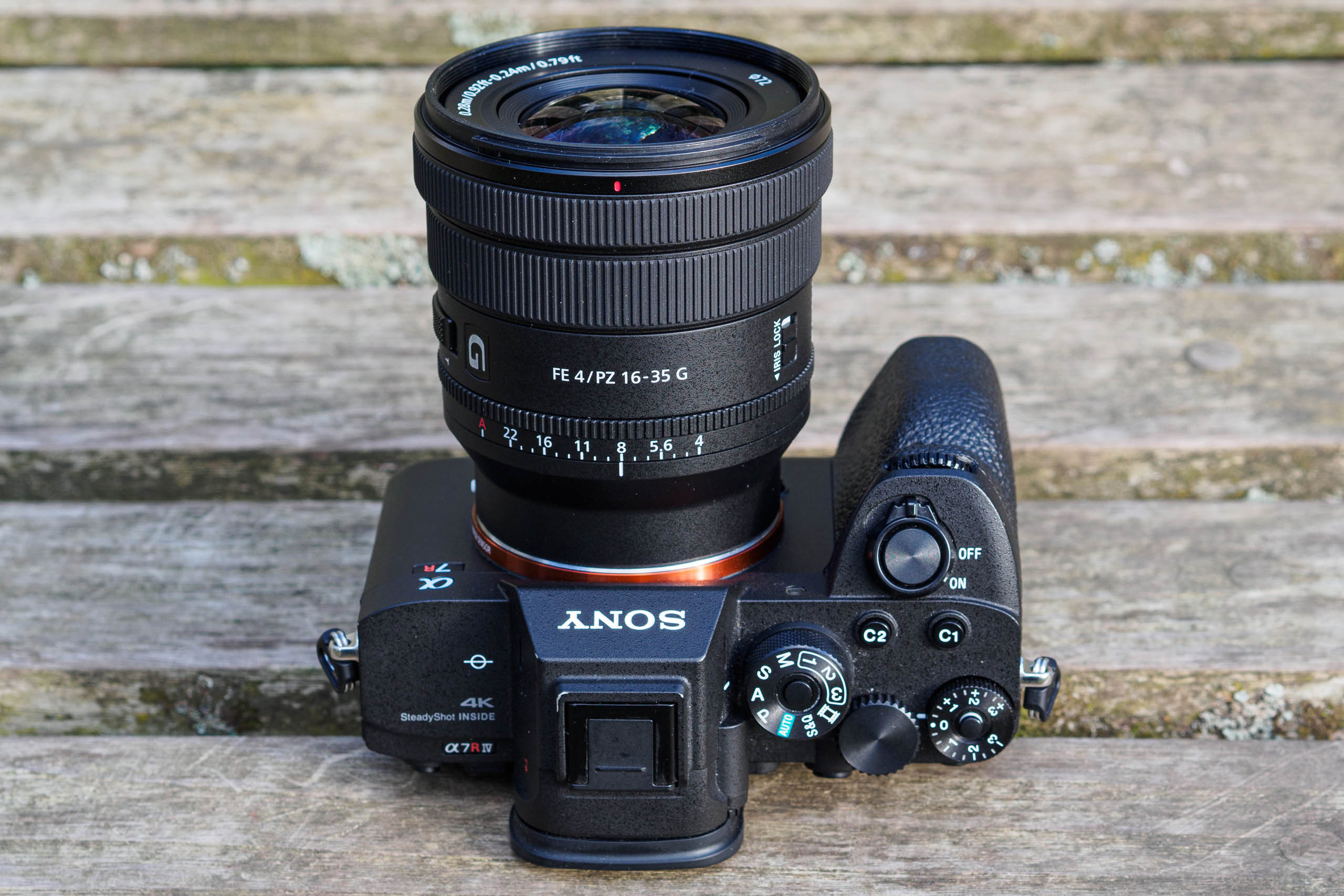 The lens is a good match to Sony’s compact full-frame bodies, and the focus and zoom rings are different diameters.

The aperture ring clicks at one-third stop increments from f/4 to f/22, with a large switch at the base of the barrel for selecting clickless operation. There’s also an A position that passes aperture control to a dial on the camera body, providing consistency of operation with lenses that don’t have aperture rings. A small Iris Lock switch allows the ring to be locked either into, or out of the A position. 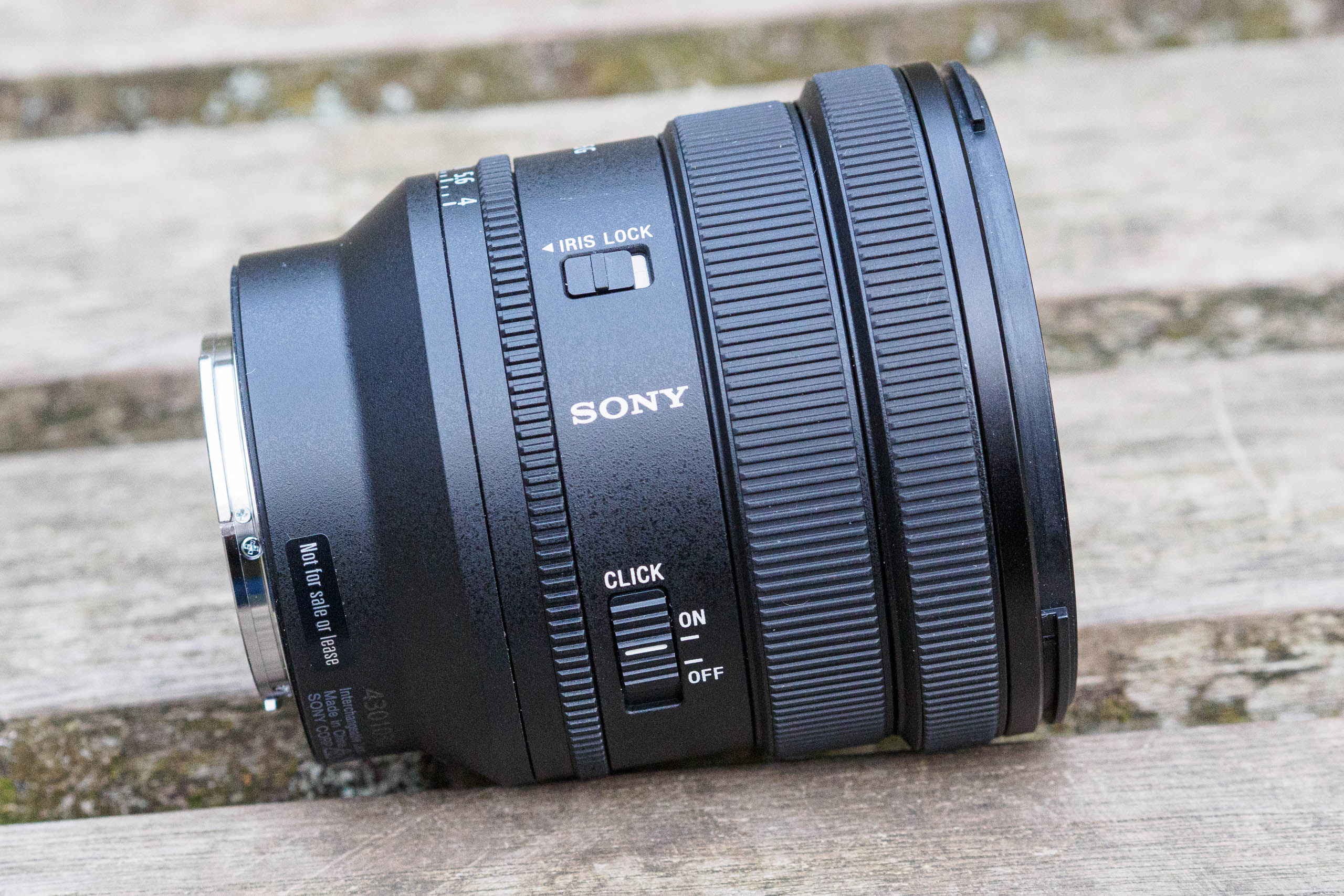 What’s most striking about this lens, though, is just how well the power zoom control works. The zoom ring has neither hard end stops nor any focal-length markings, but with the camera up to your eye, the user experience is otherwise remarkably similar to using a conventional mechanical zoom. Indeed, it allows you to fine-tune composition precisely with a light touch of your fingertip, which isn’t possible with the older FE 16-35mm F4 ZA lens. 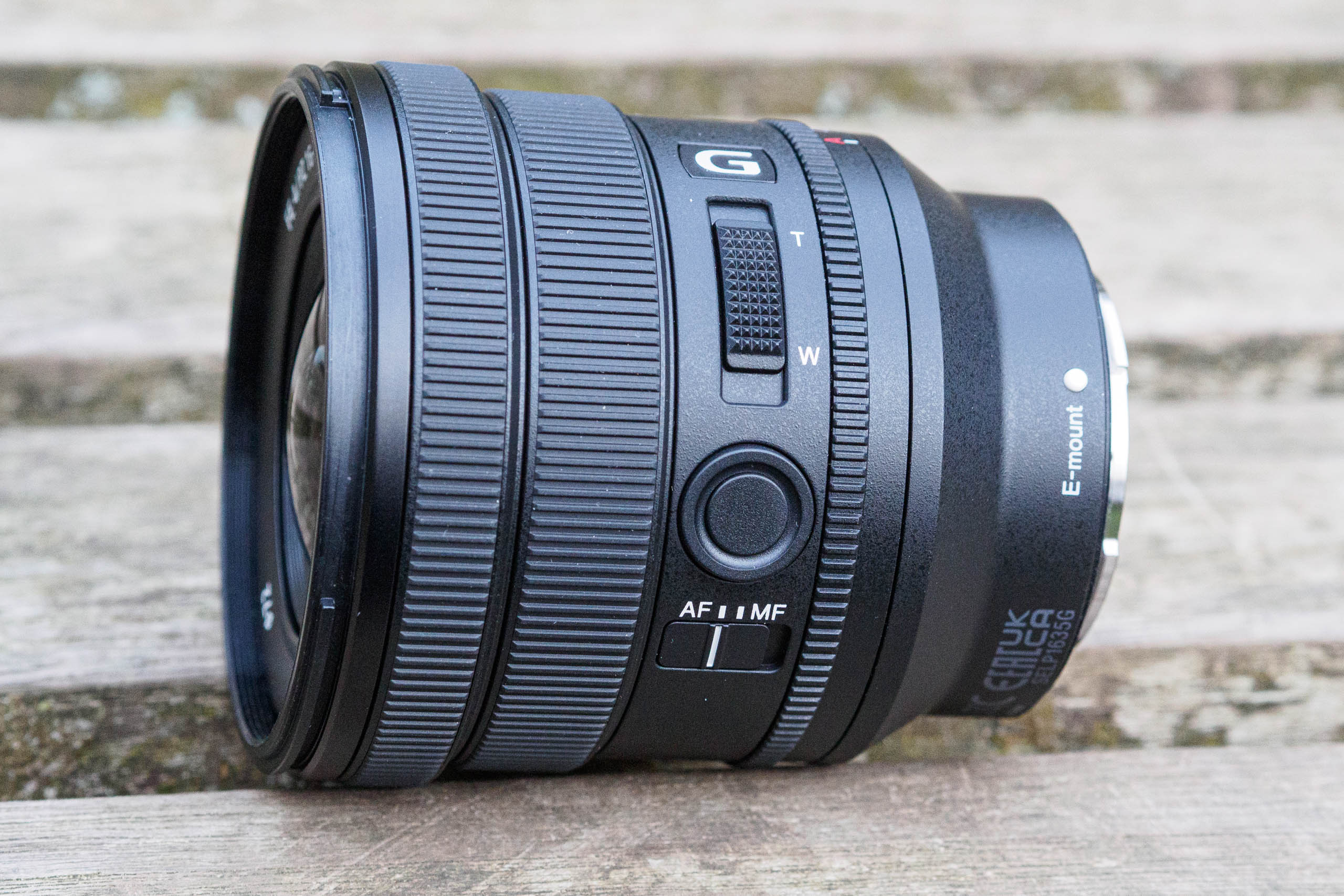 Here you can see the zoom lever, AF hold button and AF/MF switch

Meanwhile, videographers should be delighted by the zoom lever, which changes the focal length at different rates depending on how far it’s moved away from its resting position. With a small displacement it offers slow, highly controlled zooms; push it further and you can make rapid adjustments to focal length. It works impressively well.

As we’ve come to expect from Sony, the lens’s autofocus performance is excellent. It’s rapid, silent and decisive, and locks accurately onto its target in the blink of an eye. In S-AF mode it’s consistently accurate, while with C-AF, I found it was able to keep up with anything the Alpha 7R IV’s AF system asked of it. There’s nothing to complain about here. 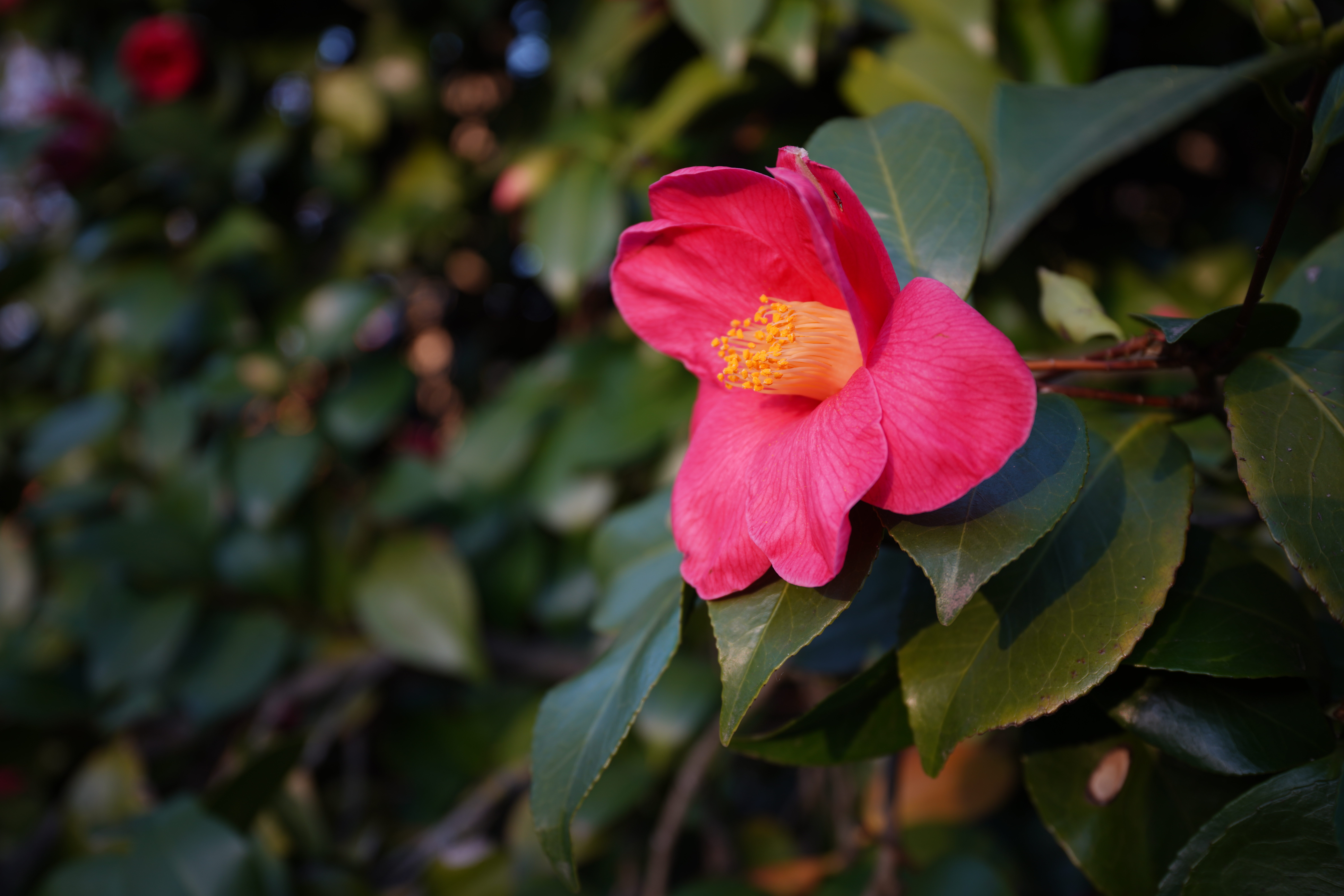 If you need to use manual focus, this also works extremely well. Rotating the focus ring will engage a magnified display in the viewfinder, while Sony’s linear response MF gives an extremely intuitive feel. Videographers will be delighted to hear that not only is there no perceptible focus breathing, but the lens also acts as if it’s parfocal, holding focus at any given distance when it’s zoomed. 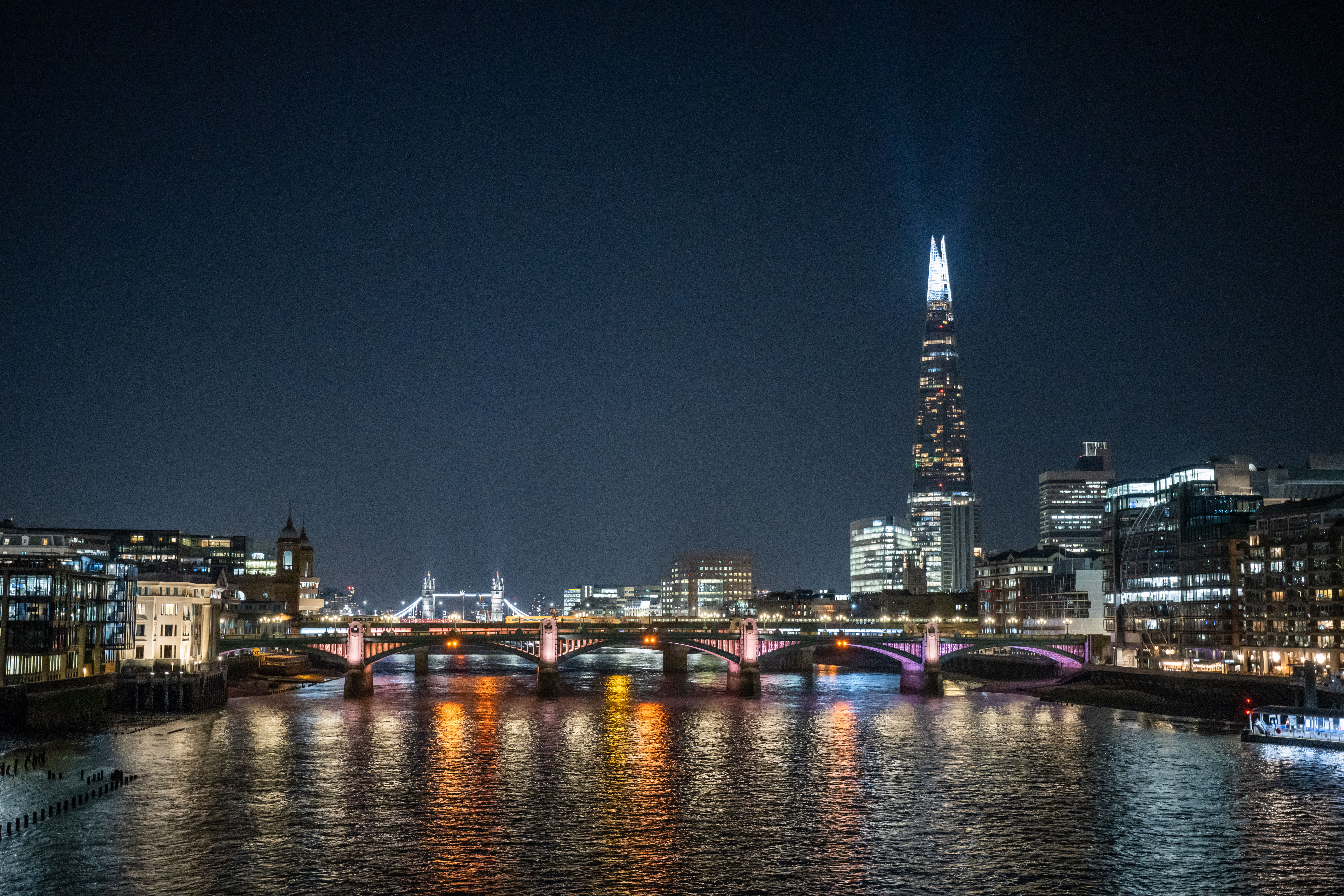 It did strike me, though, that with the zoom lever providing such smooth control during recording, it could be nice to have a similar focus lever for controlled focus pulls. However there’s a workaround to this with recent cameras, as you can make controlled focus transitions using a Bluetooth remote control.

To assess its image quality, I tested the FE PZ 16-35mm F4 G on Sony’s 60MP Alpha 7R IV. But the first clue as to how the firm has achieved the relatively compact, lightweight design lies in the fact that there’s no option to disable in-camera distortion compensation. 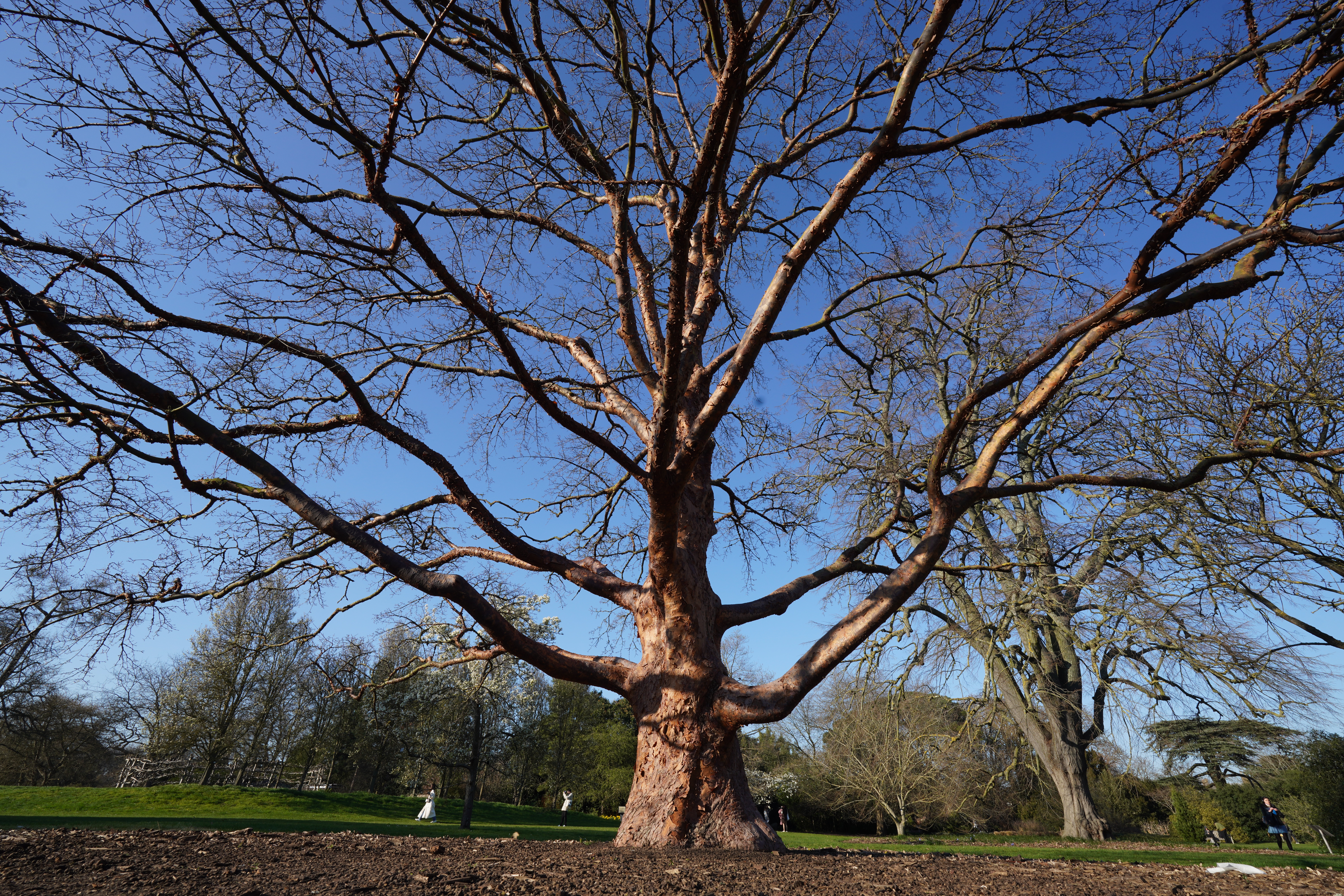 Examination of the raw files reveals that this is because the FE PZ 16-35mm F4 G exhibits extremely high levels of barrel distortion at wideangle, relying on software compensation to give geometrically correct images. The camera’s JPEG files are, of course, perfectly corrected, as are both video footage and the live view feed in the viewfinder. A lot of users will never even see what’s going on here; it only matters for photographers shooting raw. 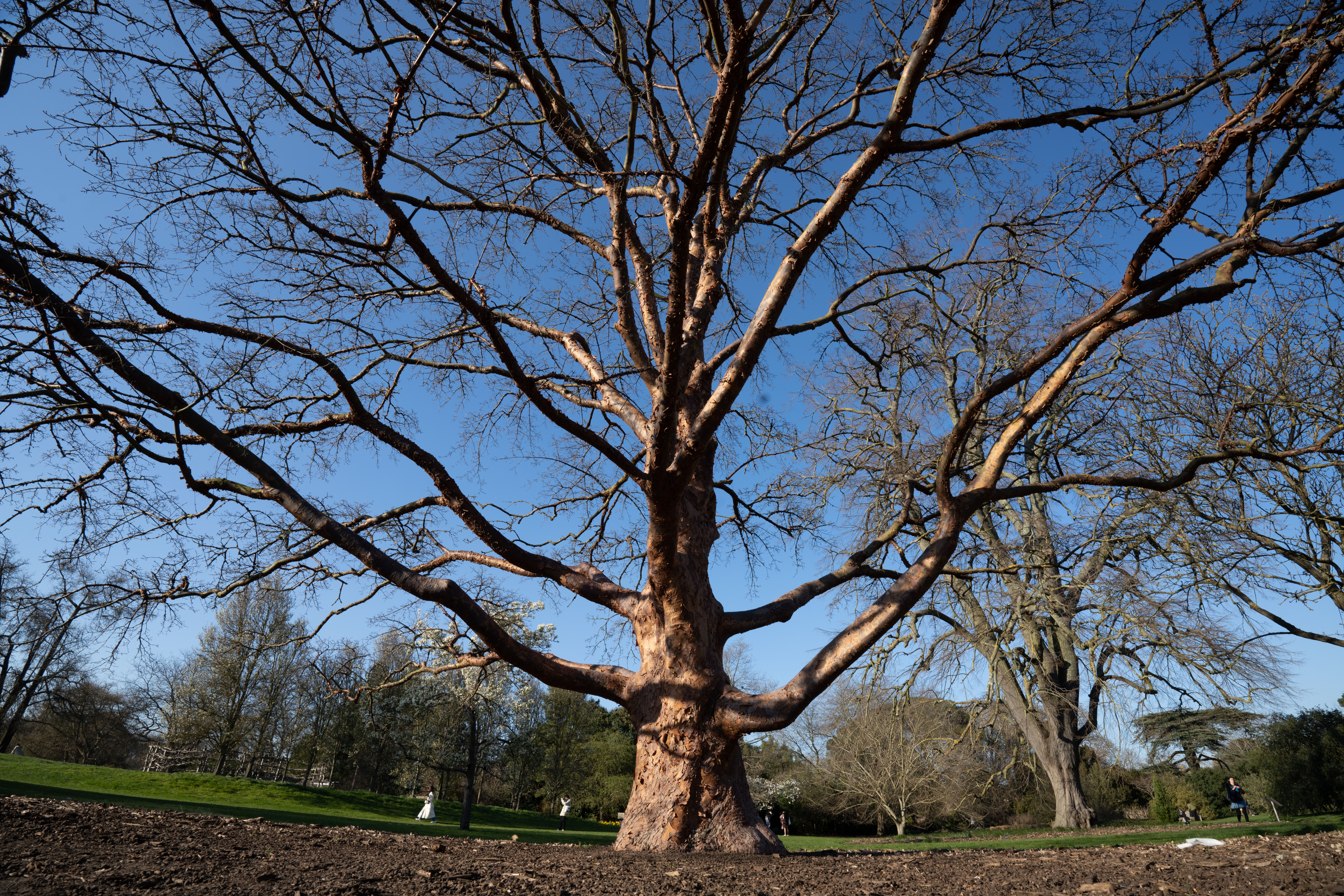 Some photographers disagree with this design approach in principle, but I don’t have a problem with it. Technically, it allows the optical designers to concentrate in minimising other aberrations, with distortion correction them coming as a ‘free’ fix in software. As far as I’m concerned, all that matters is how your final images turn out, not the opto-electronic means of getting there. 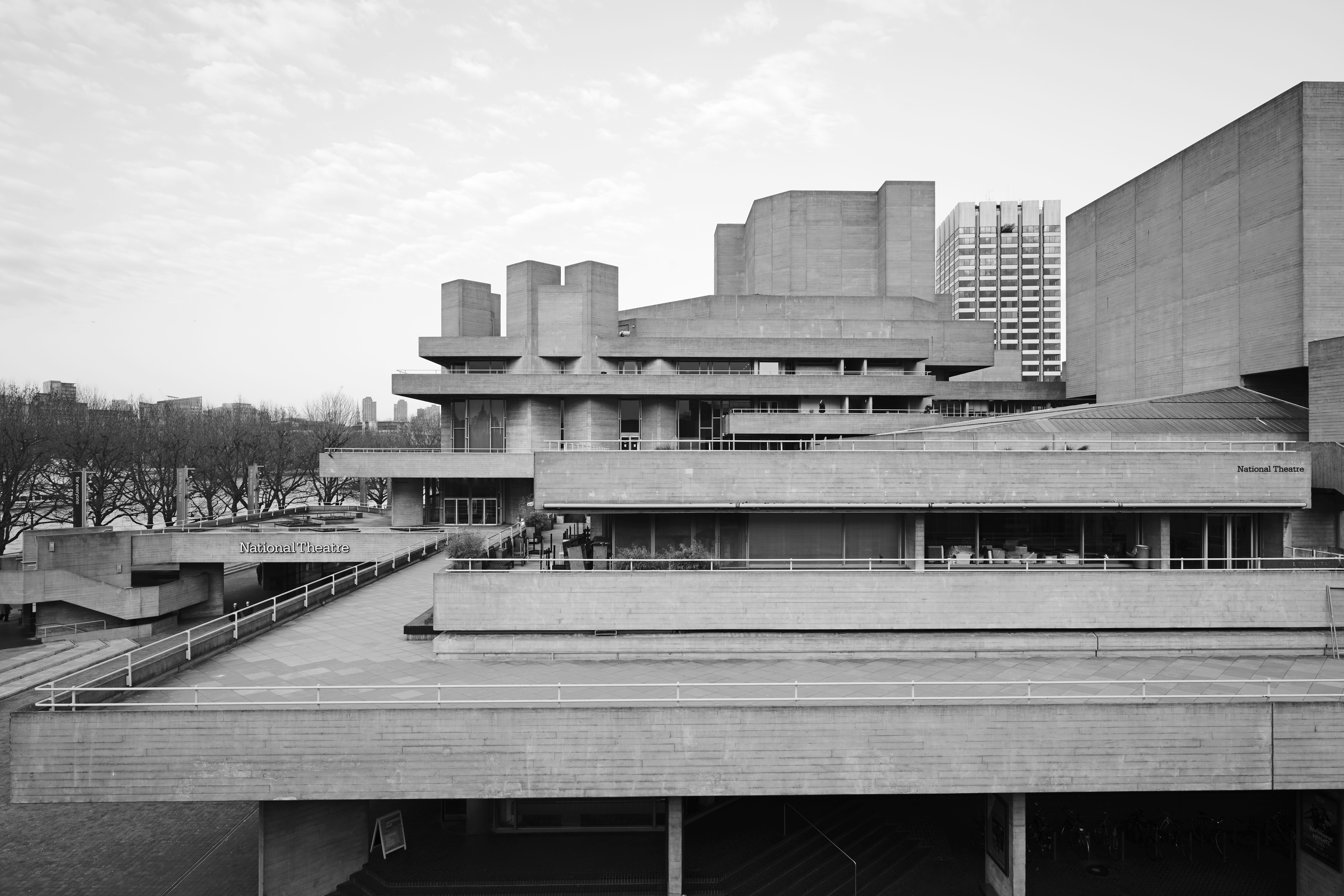 In this respect, the FE PZ 16-35mm F4 G provides an object lesson in how effective this approach to lens design can be. Compared side-by-side with the older 16-35mm in real-world use, it’s every bit as sharp, not just in the centre of the frame, but also towards the edges. 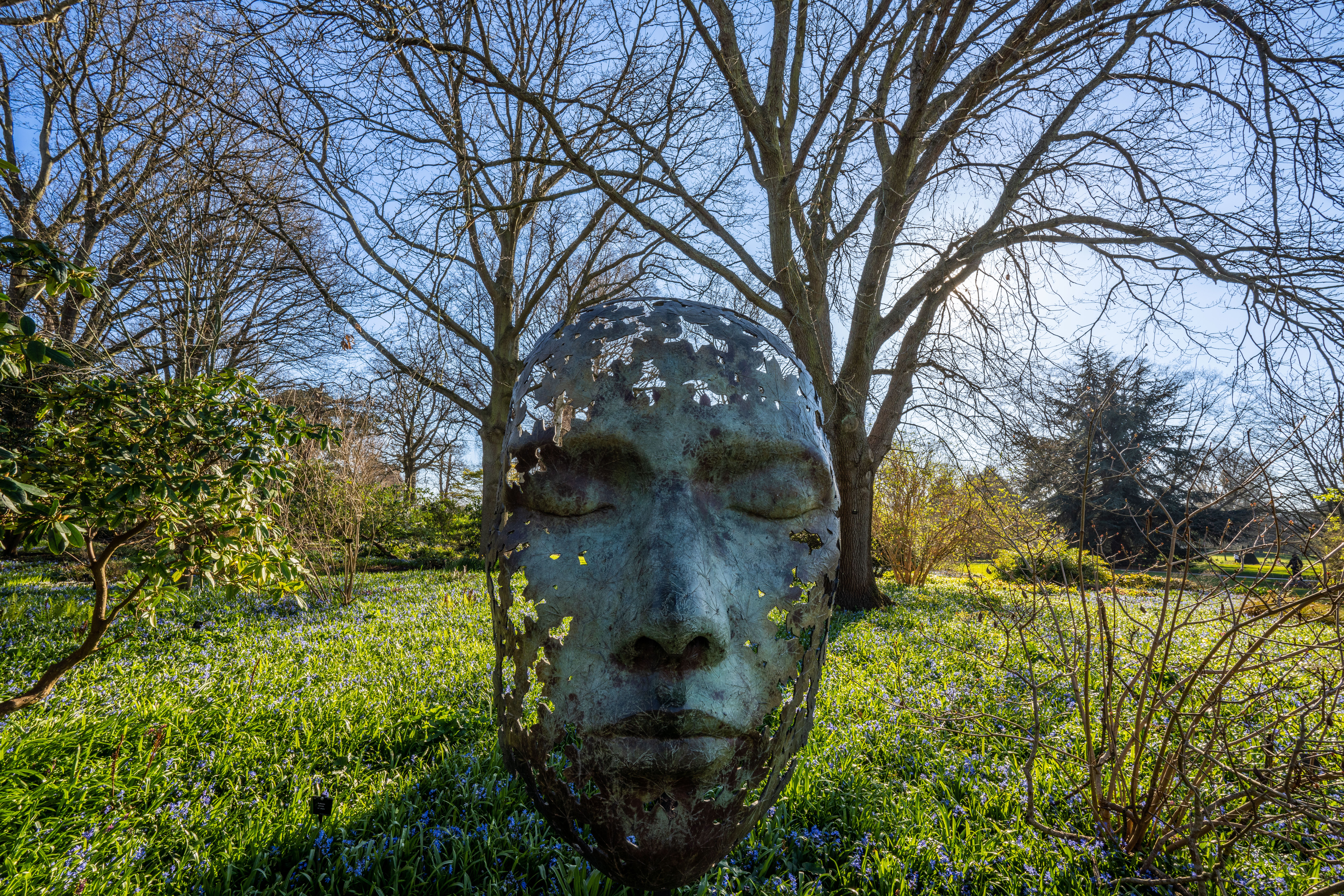 Neither lens looks pixel-perfect on the A7R IV in the extreme corners, but using software distortion compensation gives just as good results as the older design’s conventional optical correction. You’re equally likely to lose critical sharpness due to a lack of depth of field, or from diffraction blurring when stopping down to overcome it. 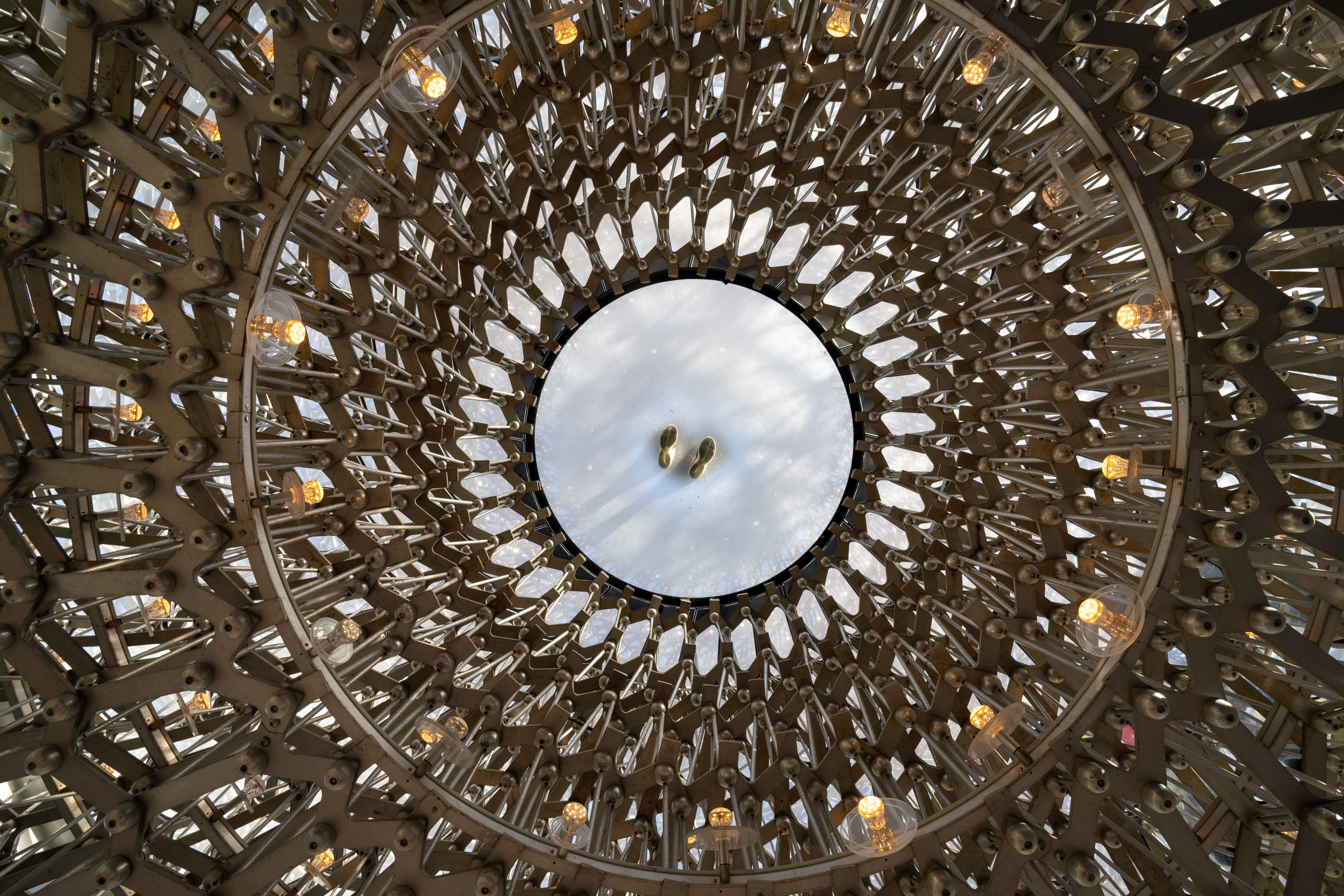 Indeed overall, the lens performs well in real-world use, giving consistent images with no nasty surprises across all focal lengths, apertures and focus distances. It may not provide quite such spectacular cross-frame sharpness as Sony’s premium G Master optics, but you’d have to stare closely at your images onscreen, or print very large, to see much of a difference. As is often the case on full-frame, you’ll get the sharpest results between f/5.6 and f/11, before diffraction blurring starts to take its toll at smaller apertures. 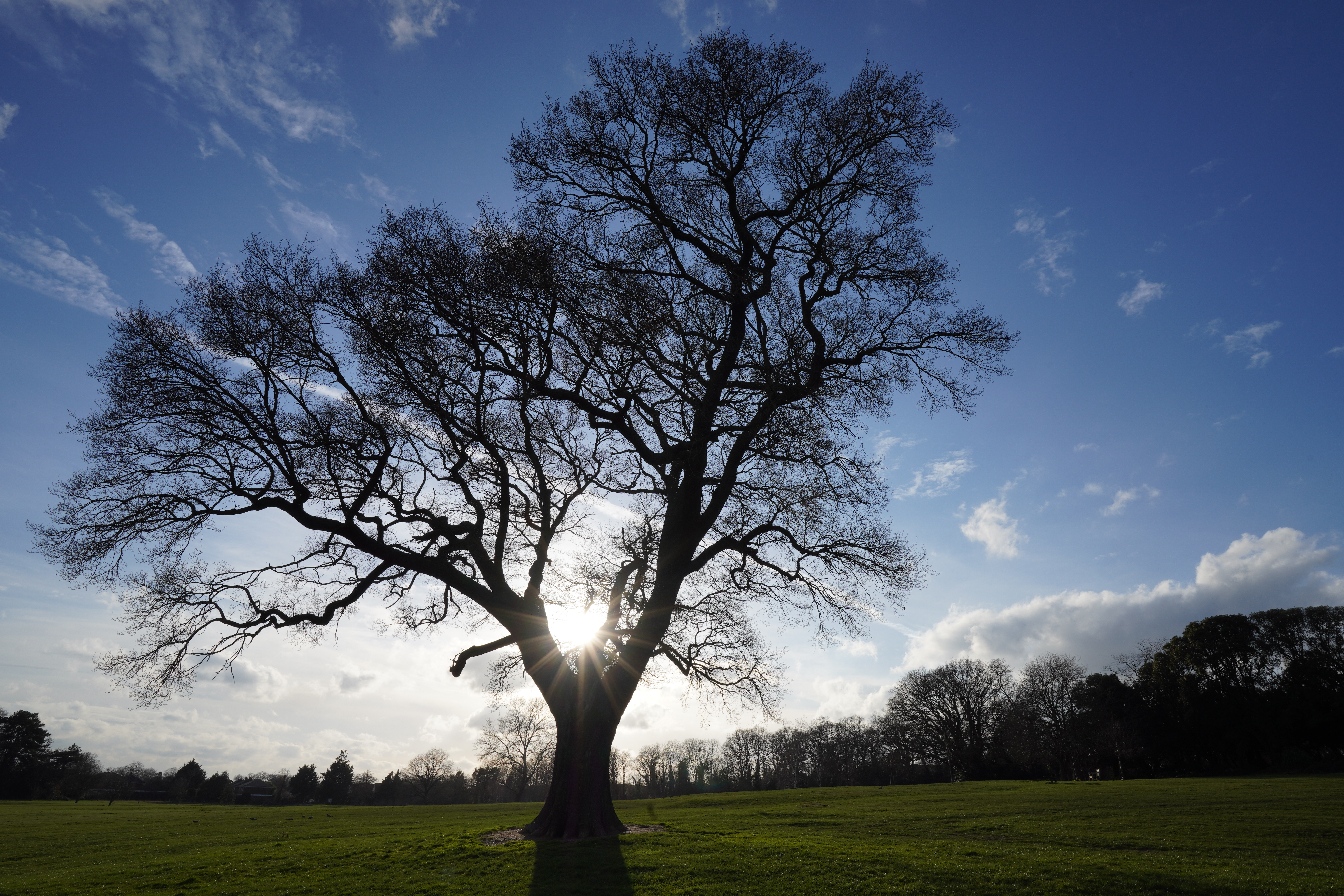 The lens deals extremely well with shooting directly into the light, with minimal flare or loss of contrast, which will be welcome for landscape shooters. About the only area where it’s not always great so is in rendering blurred backgrounds with close-up subjects, often giving somewhat ‘busy’ bokeh. But it wouldn’t be my first choice for this kind of work anyway. 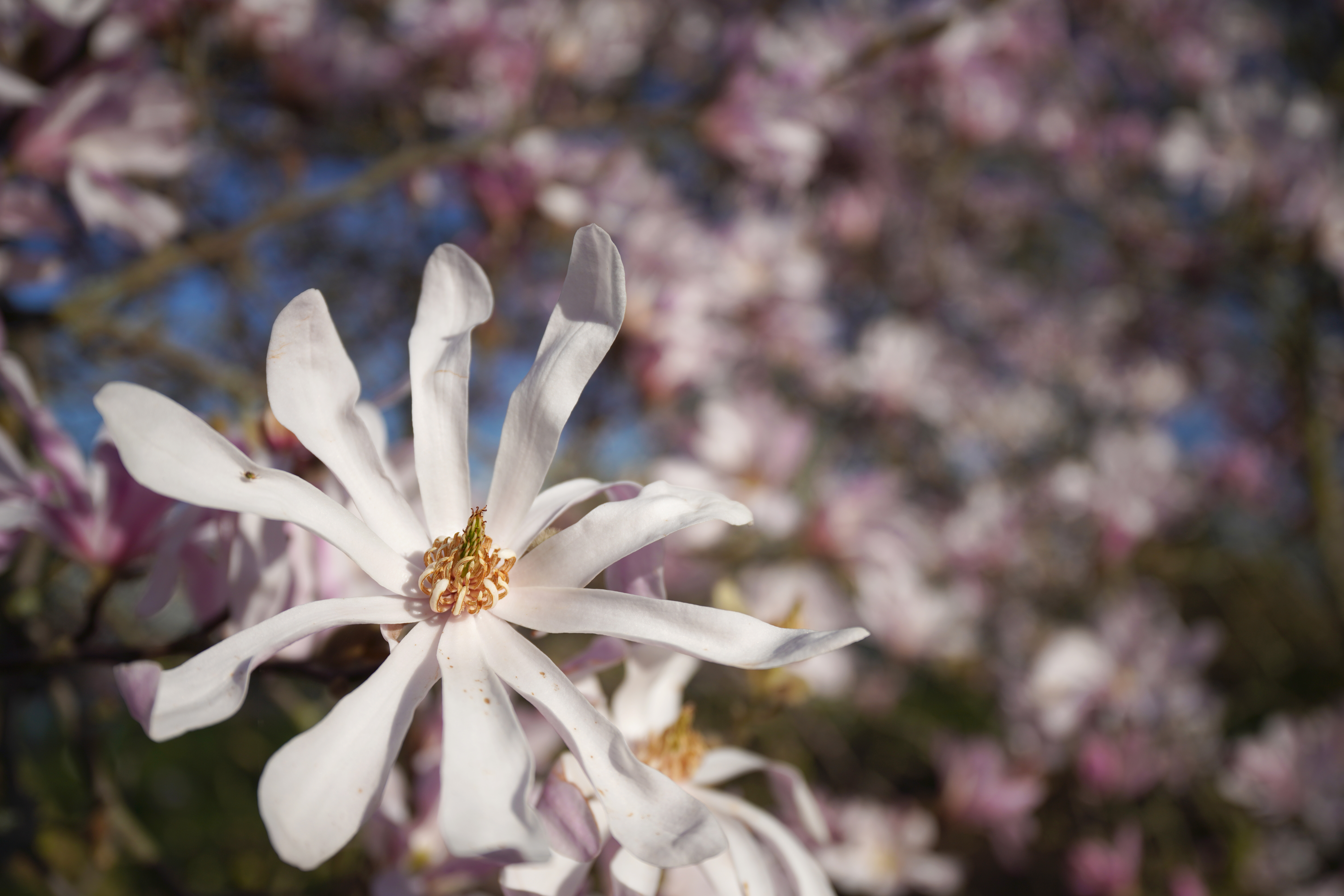 The one thing raw shooters will have to deal with, though, is that distortion. At 16mm it’s sufficiently extreme that it’ll have to be fixed in almost every image, and it’s also complex and wavy in character, which means it really needs profiled corrections. It progressively decreases at longer focal lengths, reaching a neutral point at about 26mm, before changing to modest pincushion distortion at 35mm. But this shouldn’t be a problem once the likes of Adobe and DxO have made their corrective lens profiles.

It could be tempting to characterise the Sony FE PZ 16-35mm F4 G as being a lens for videographers, simply due to its power zoom design. But this would be to do it an injustice. Sony has overcome the usual irritation of clunky, imprecise zoom controls and delivered a lens that works just as well for shooting still images. I’ve been really impressed by its implementation of power zoom, and can imagine many more lenses being made this way in future. 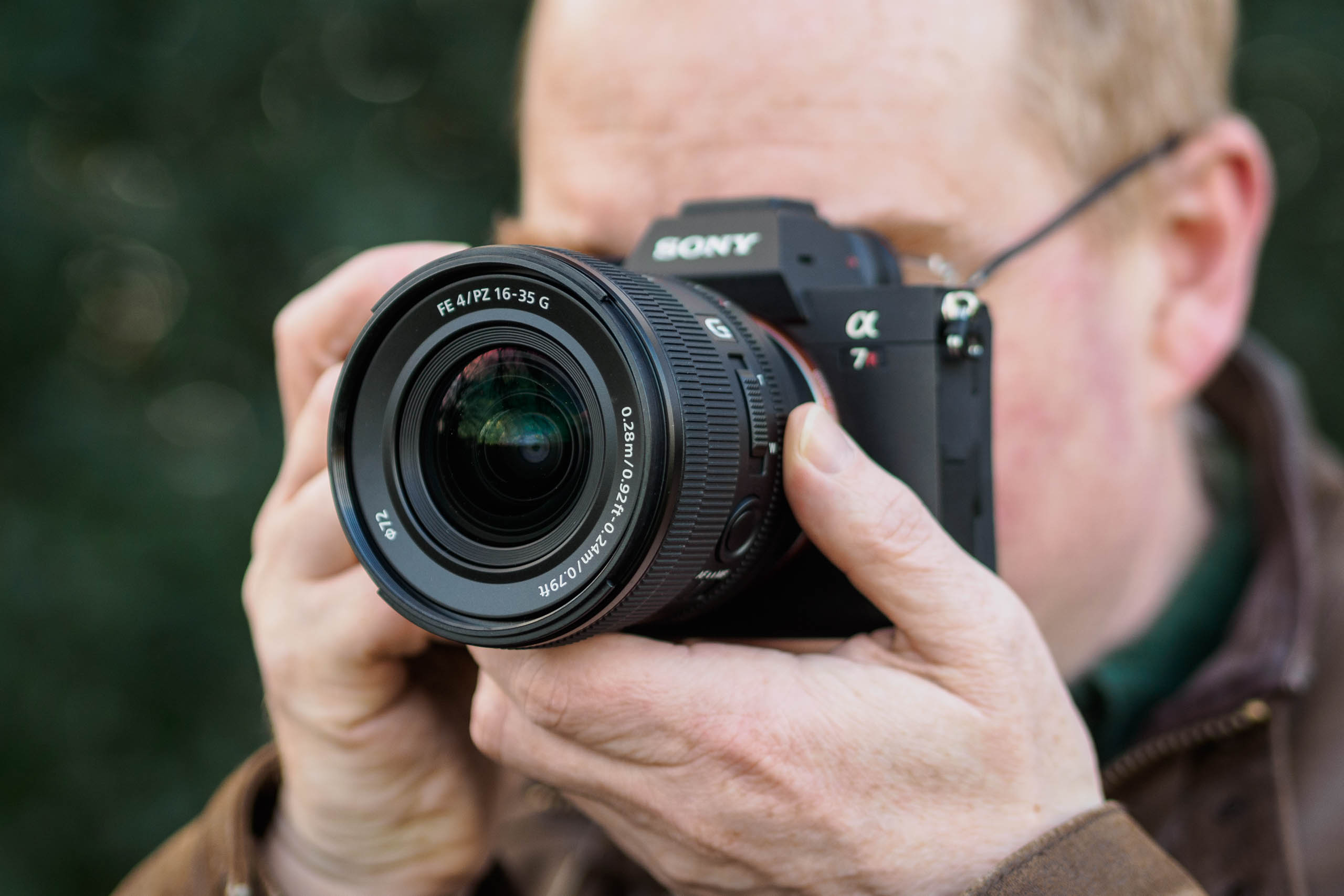 At £1300, the FE PZ 16-35mm F4 G is, however, the most expensive of the compact FE-mount wideangle zooms currently available. Compared to its Zeiss-badged predecessor that sells for £1149, it’s usefully lighter and boasts much-improved operability, but doesn’t bring significantly better image quality. Meanwhile Tamron’s 17-28mm F/2.8 Di III RXD benefits from a faster maximum aperture at the cost of a narrower zoom range, and sports excellent optics too. At £849, it represents fantastic value for money. 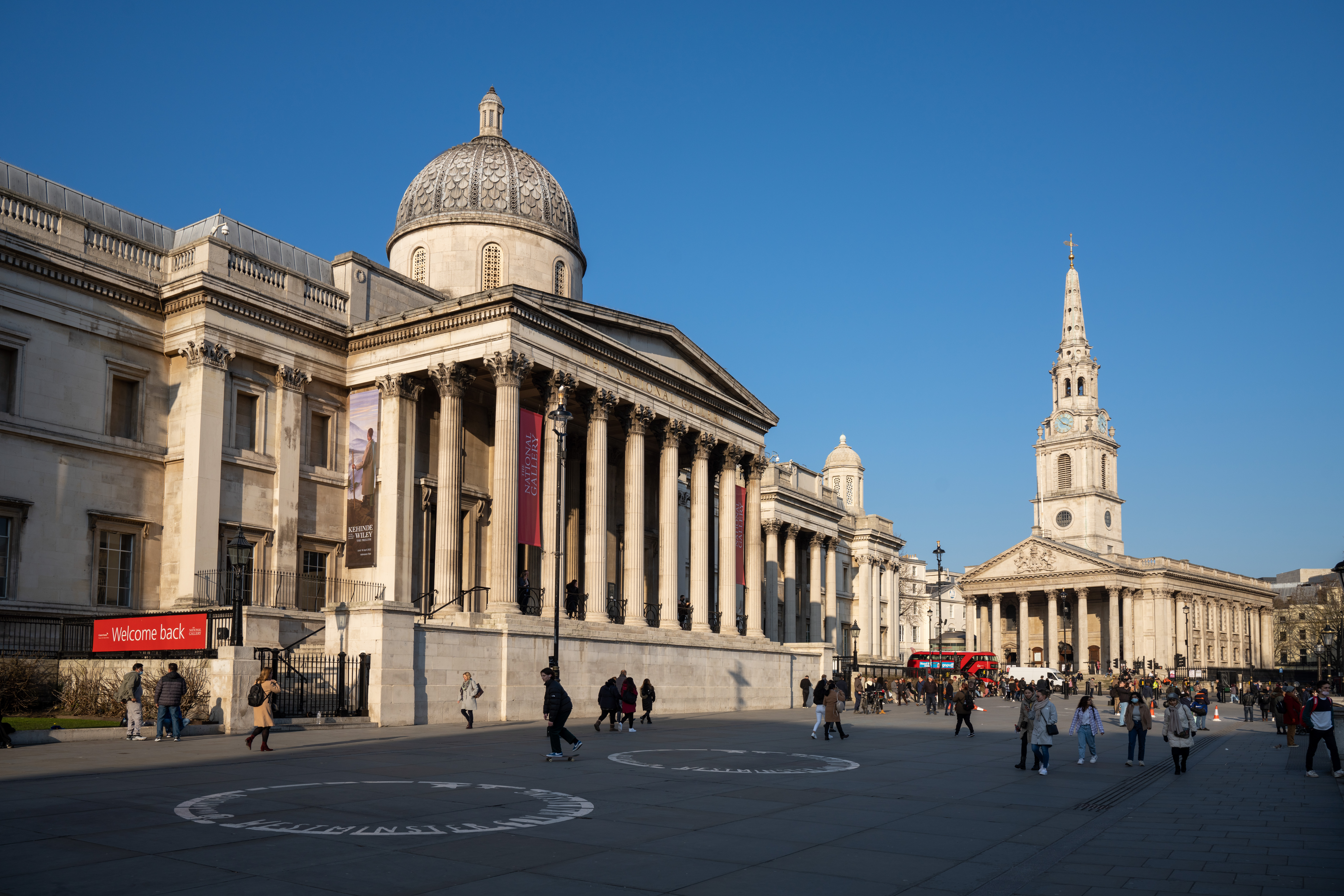 As a result, the FE PZ 16-35mm F4 G is still likely to find most favour with those who can exploit its power zoom during video recording, at least at its launch price. But with its compact size, consistent image quality, dust- and splash-proof design, and excellent operability, it’s also an enticing option for Sony full-frame photographers looking to travel light. 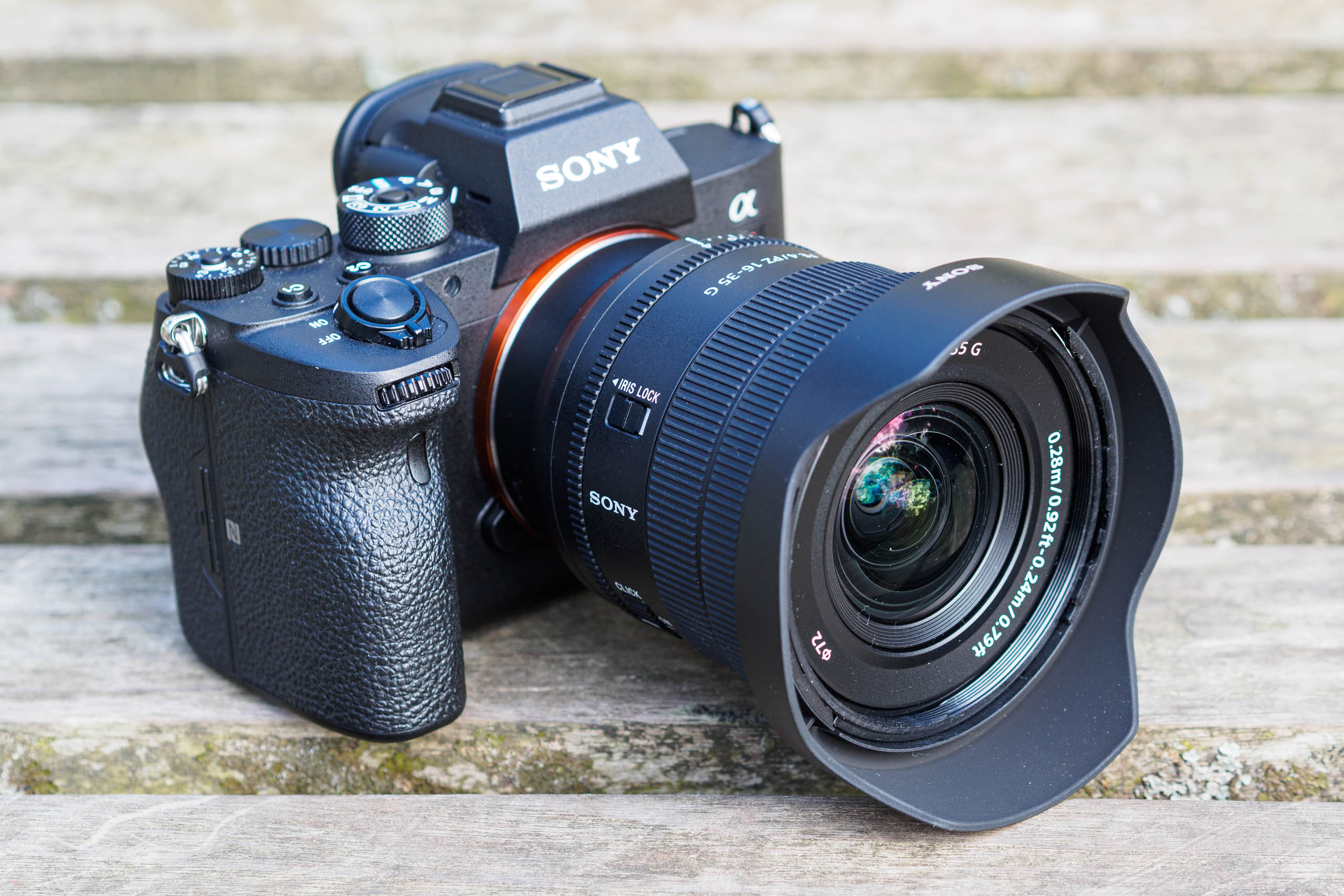