Cons: - Not ideal for Astrophotography due to comatic aberrations at f/1.8 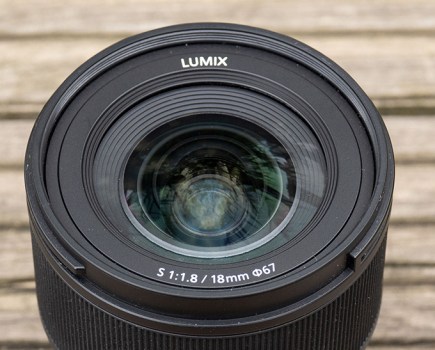 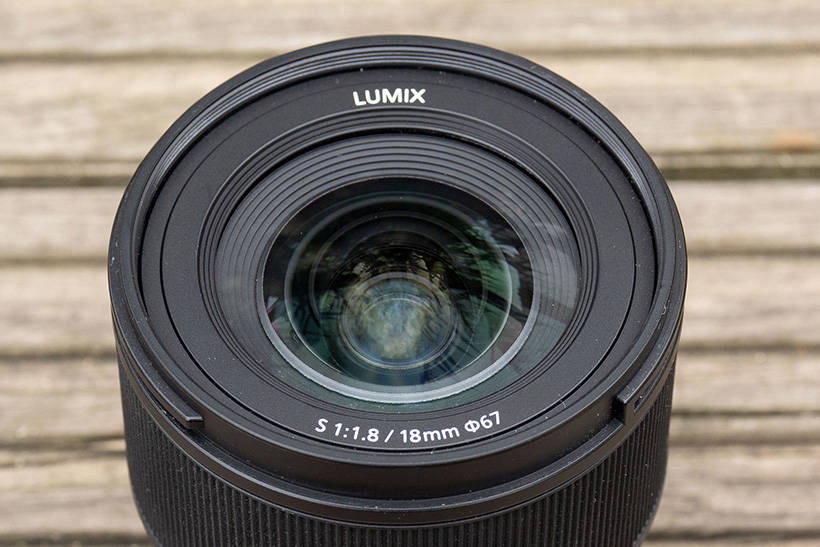 Cons: - Not ideal for Astrophotography due to comatic aberrations at f/1.8

Creating a lens range that has to appeal to both videographers and photographers is a challenging prospect, but with the lenses that have come before the Panasonic Lumix 18mm F1.8, Panasonic’s Lumix brand has been delivering.

The company embarked on creating a full range of full-frame L-mount fast primes, starting with the Lumix S 85mm F1.8, announced in November 2020. Since then, we’ve seen that lens followed up by 50mm, 24mm and a 35mm optics, all with a maximum f/1.8 aperture and all sharing the same length, diameter and 67mm filter thread size. Now they’re joined by the £799 Panasonic Lumix S 18mm F1.8.

The uniform design of this family of lenses makes them ideal for people who plan to mount them on gimbals due to their similar size and weight. Swapping between any of the lenses in the series requires minimal centre of gravity shift, if at all. All the S f/1.8 series lenses have identical focus rings, meaning no adjustments would need to be made to a follow-focus system either. Needing a single filter size for the whole range also adds to the appeal and convenience of the set.

Of the range, fitting the requisite glass for an 18mm ultra-wide lens with a fast f/1.8 aperture into such a compact and light configuration is perhaps the most impressive feat technically.

Comparing this lens in terms of size, weight and cost to its closest competitors makes the point clearly. There are no ultra-wide full-frame lenses for L mount that match or surpass the S 18mm F1.8 for its combination of speed and field of view. Sigma does have a couple of alternatives that come close. The cheapest of the bunch, the Sigma 20mm f/2 DG DN lens costs £150 less, but it’s not as wide, 30g heavier and 1/3rd of a stop slower.

Considering the competition, it’s clear that the Lumix S 18mm f/1.8 could slot in neatly where the gap is, that’s of course if it delivers to the same high standards that the rest of its stablemates have set. 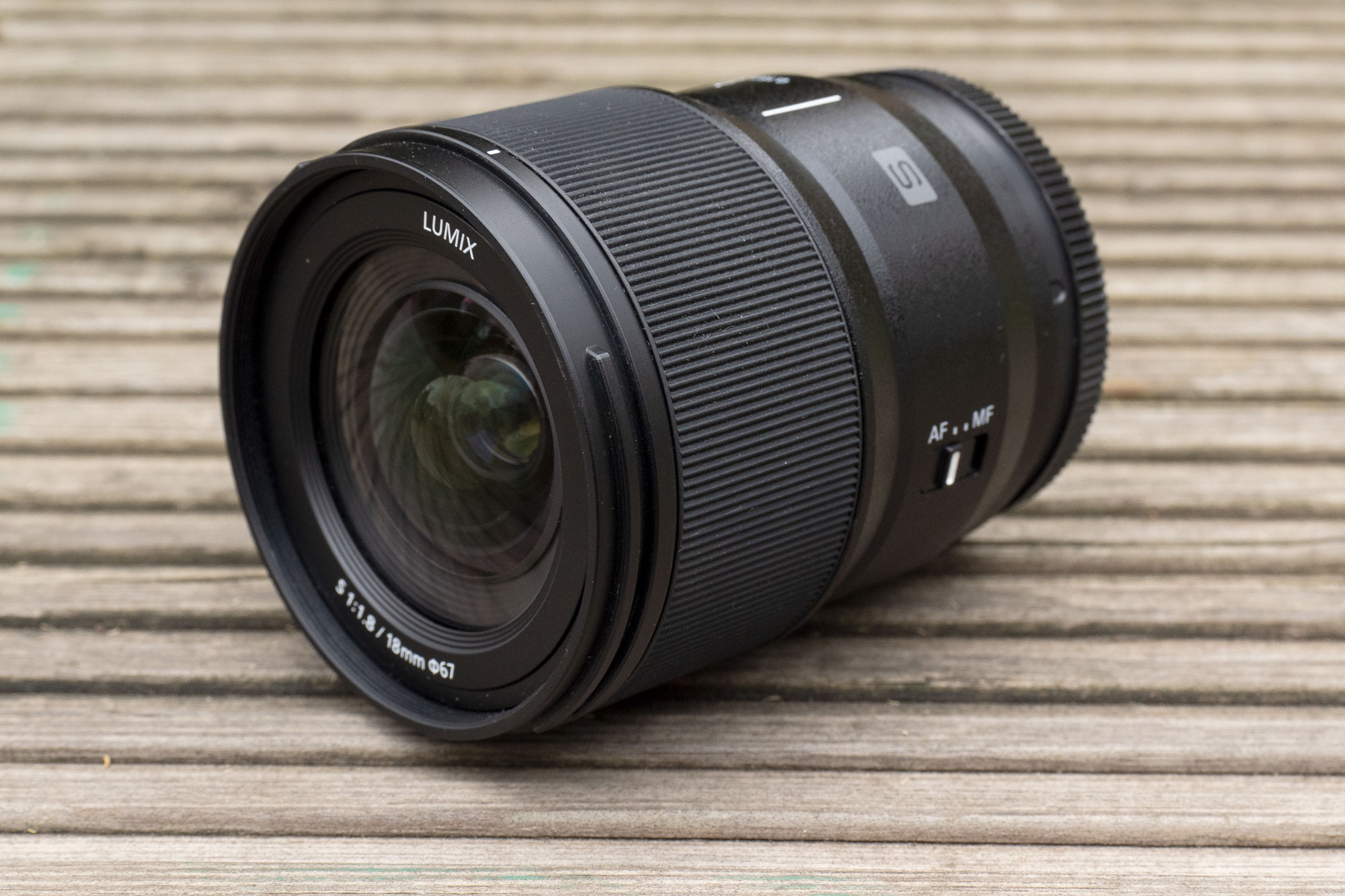 To keep costs and size down, the Panasonic Lumix S 18mm f/1.8 does not benefit from image stabilisation and features a single control switch for AF/MF, just like the other f/1.8 primes.

However, that’s less of a concern when you’re planning to pair it with a Lumix full-frame camera like the Lumix S5, which has very effective in-body image stabilisation for handheld shooting. IBIS is even less necessary for gimbal-mounted use of this lens for obvious reasons. 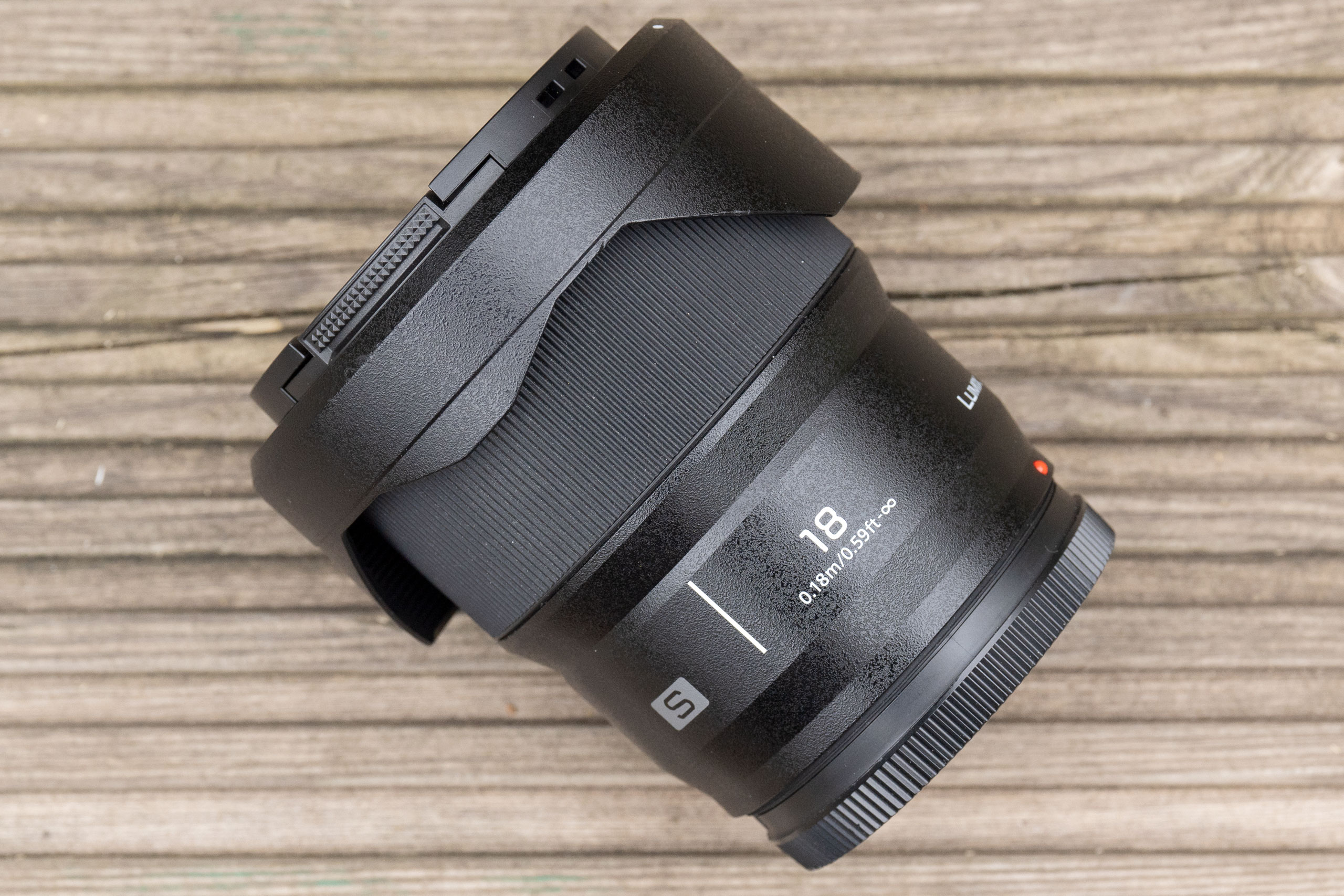 Its ultra-wide focal length makes this an incredibly versatile lens. It would suit landscape and cityscape photography just as much as it would suit vlogging style video creators. Paired with the S5, this 18mm lens is wide and lightweight enough to comfortably handhold while presenting to the camera, keeping everything within frame without the need for a selfie grip or even a full-arm extension.

Carrying a wide maximum aperture of f/1.8 also makes the Panasonic Lumix 18mm lens a superb lens for events photography and video creation, particularly during night concerts and festivals. This lens has a minimum focusing distance of 18cm. This is great for photographing close-up subjects or vistas with detailed foreground elements. Just make sure to avoid casting shadows on them. 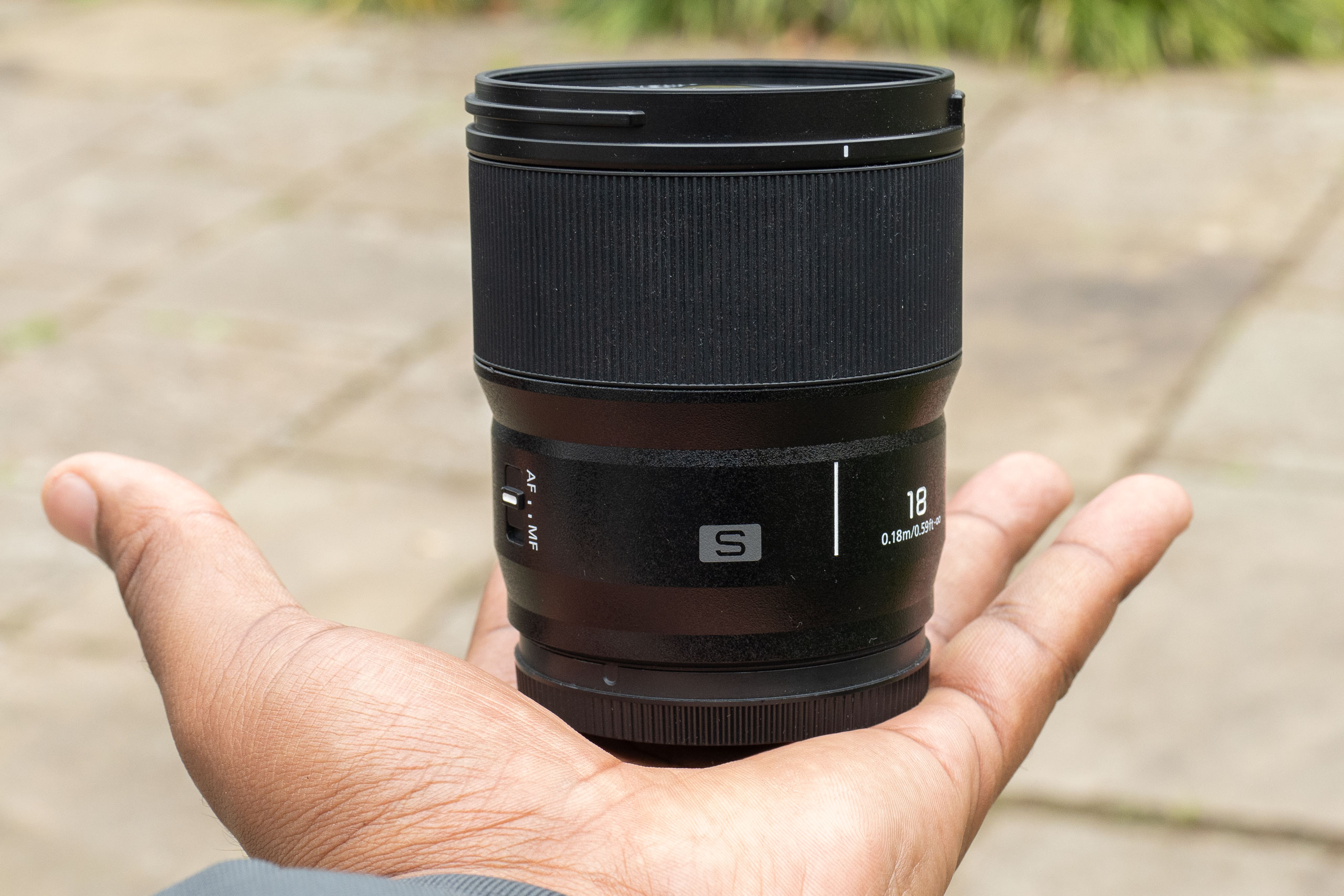 This configuration is designed to deliver a fine balance of resolution and contrast. All while minimising the effects of chromatic aberrations and lens flare. It also relies on software-based correction to combat barrel distortion, diffraction and vignetting. The in-camera corrections for the second two can be turned off in compatible cameras. 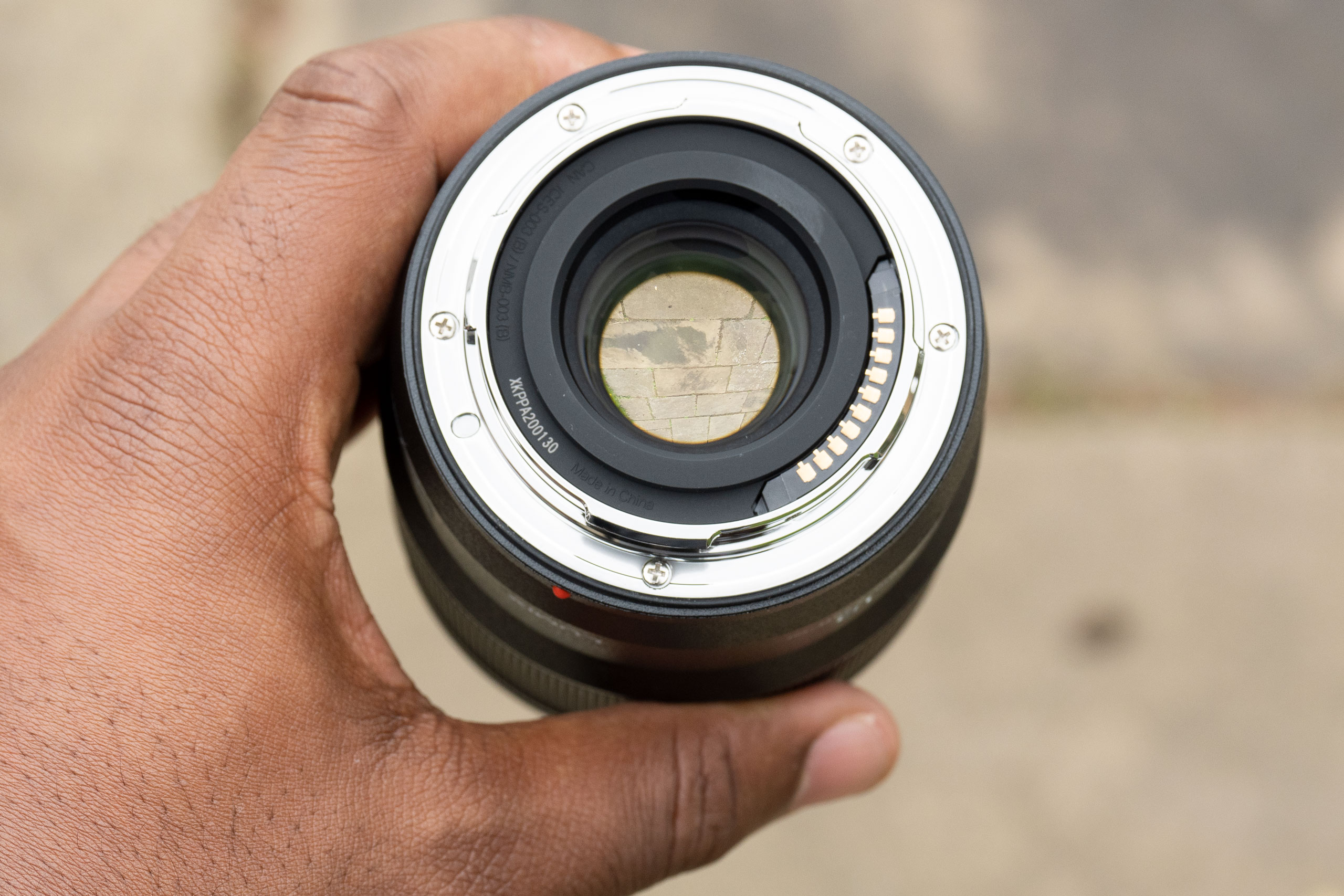 Like the rest of the f/1.8 series lenses, the 18mm features “micro-step aperture control”, designed to make transitions between aperture settings smoother. It also uses a stepper motor, which should deliver fast and quiet autofocusing, while the lens focuses internally. Video creators will find these features especially helpful. 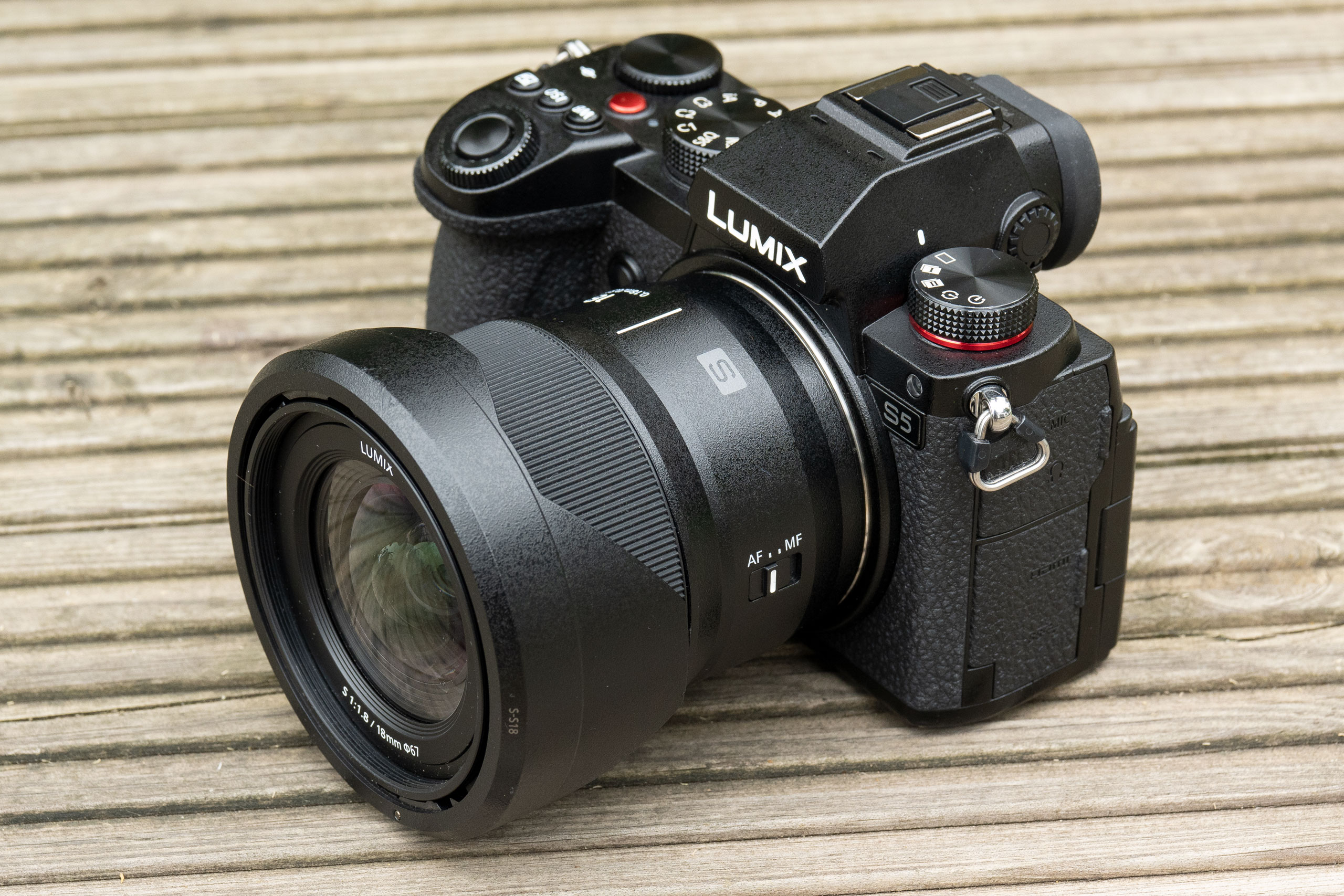 In terms of build quality, the Panasonic Lumix S 18mm F1.8 features a tough polycarbonate plastic housing and a metal mount. It has a rubber O-ring, which seals it against dust and moisture. Measuring 82mm in length, 73.6mm in diameter and weighing only 340g this lens is a perfectly balanced companion for a full-frame mirrorless camera like the Lumix S5.

Only Sigma’s 20mm f/2 DG DN Contemporary lens offers a comparable combination of aperture, size and weight. The Sigma 20mm f/2 is smaller, measuring 72.4mm in length and 70mm in diameter. Yet it’s still 370g, 30g heavier than the Lumix S 18mm f/1.8. The extra weight is due to its all-metal construction and the inclusion of a tactile aperture ring.

In terms of construction, the Sigma lens generally looks and feels more sophisticated. The Sigma warrants strong consideration if you’re willing to compromise on speed and field of view, and you’re less concerned about video performance.

Lumix has also supplied a plastic petal-type lens hood in the box with the 18mm. It has a satisfying bayonet locking mechanism. Thanks to its design and the large focusing ring, there’s still enough space to make focusing adjustments when the lens hood is mounted in reverse for storage. 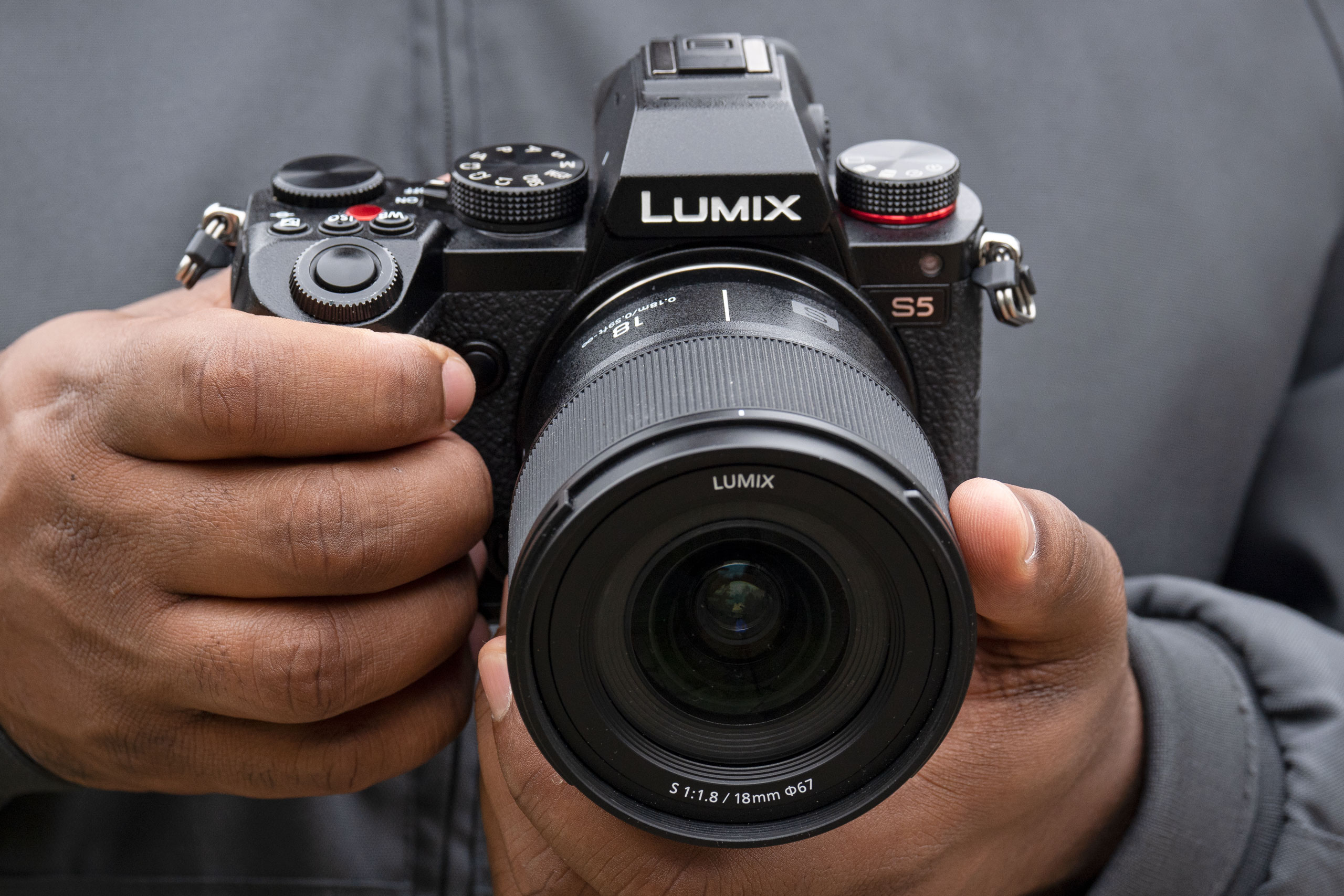 Speaking of the focusing ring, it’s generous in size and smoothly dampened. This makes it a pleasure to use, even with gloves on. It does provide a decent amount of grip, but with a follow-focus system, you may still want to use a focus gear ring.

The rotation function of the lens can be adjusted in the menu of a compatible camera. It can be set to function in a linear or nonlinear fashion. When non-linear focusing is selected, the speed of focusing affects the throw of its distance. In linear mode, focusing reacts to how far you turn the ring. It can be set between 90° and 360° in 30° increments. 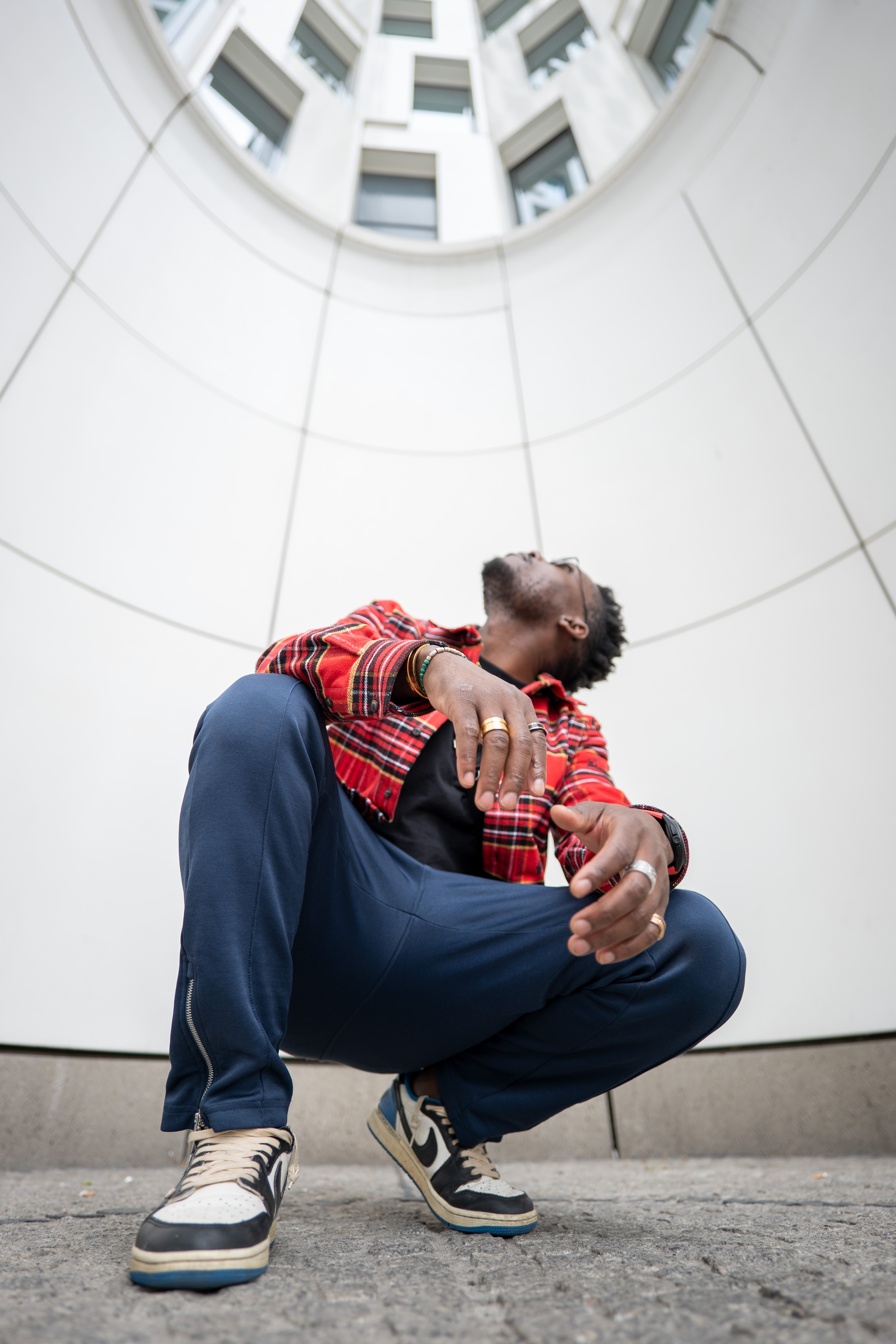 This lens was paired with the Lumix S5 for review as it felt like the natural companion for the brand’s lightest and most compact full-frame mirrorless camera. The S5 also enjoys the most advanced focusing capabilities of the S-series line-up. This is why it is the better choice for assessing this lens’ autofocusing capabilities.

The Panasonic Lumix S 18mm’s stepper motor manages to achieve consistently fast and accurate actuations with practically undetectable motor noise. This near-silent operation is perfect for capturing pictures in situations that require discretion, such as an acoustic concert performance or when recording video with sound. 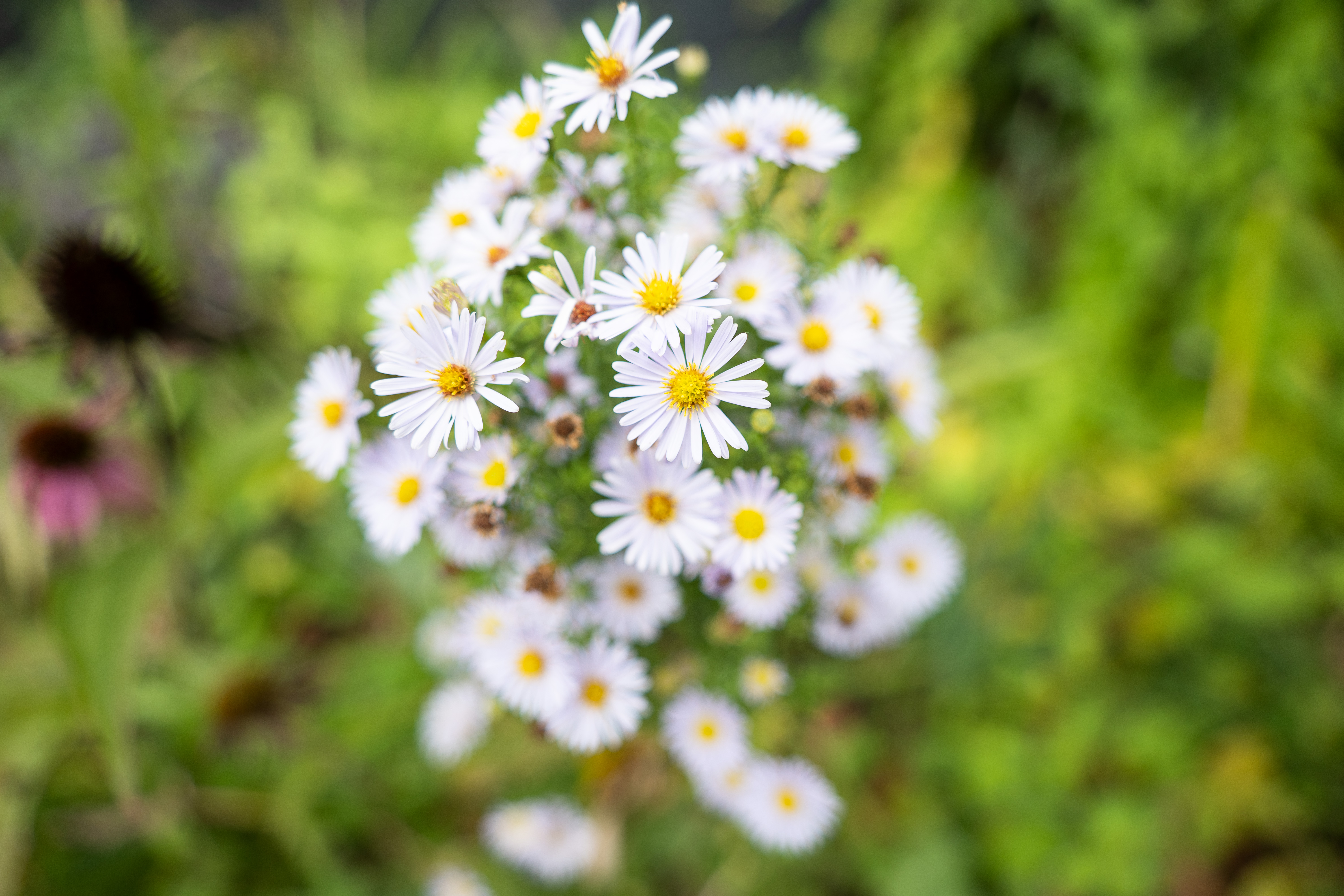 This is a smooth fast-focusing lens that transitions pleasingly between focusing positions. And key for video creators, it features a mechanism that suppresses focus breathing.

What does this mean? For example, when the lens transitions from subject to foreground, it doesn’t appear to zoom in or out. Instead, it can automatically rack focus smoothly. This makes it easier to achieve more cinematic focusing movements without relying on manual focus pulling. 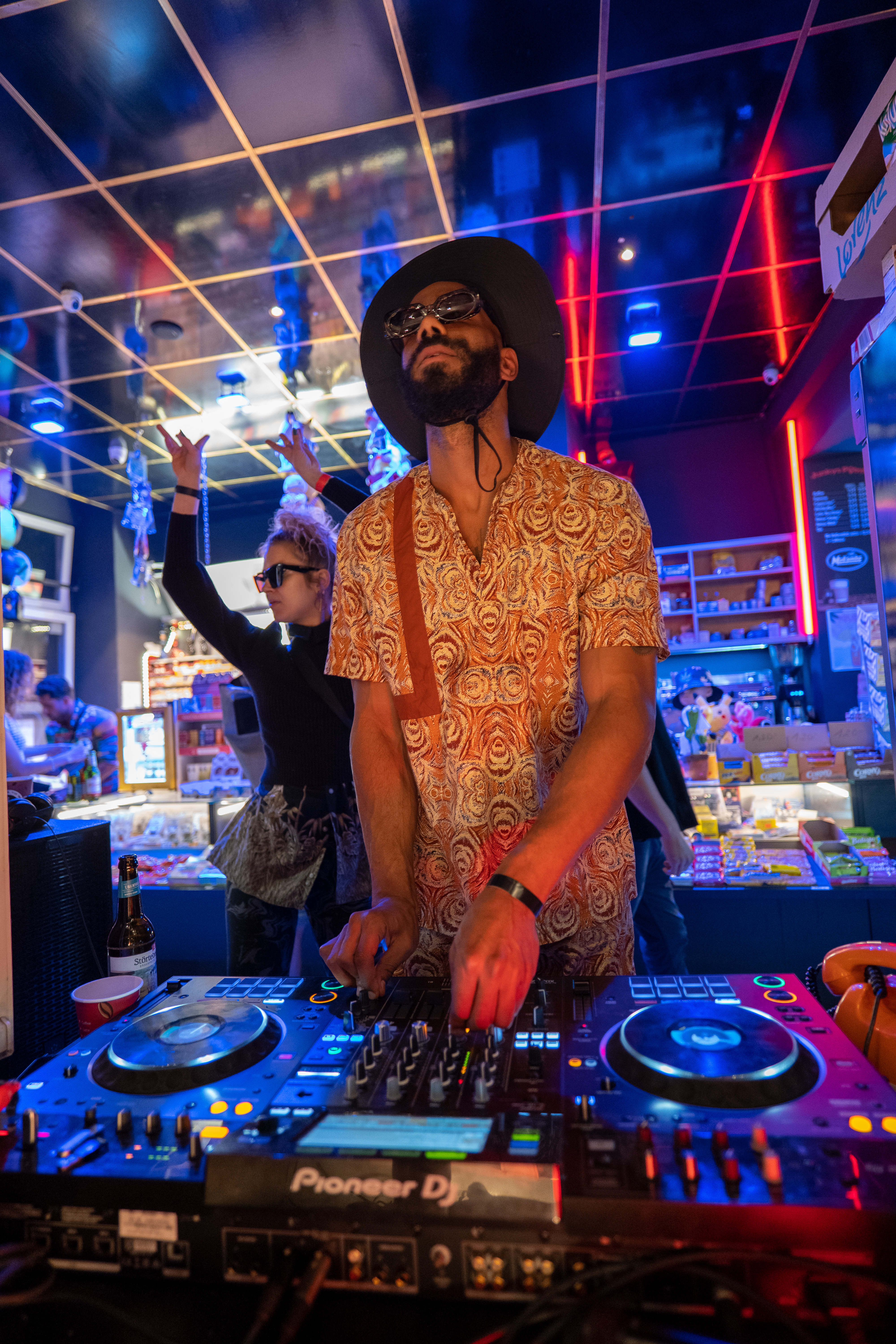 This is an advantage over more photography-focused lenses, like its Sigma rivals. When you want to take over focusing manually, overriding the camera’s AF system is seamless. All you need to do is press and hold either the shutter or AF-on buttons. You can also choose between a picture-in-picture or full screen MF-magnification for assisting you when making fine adjustments. 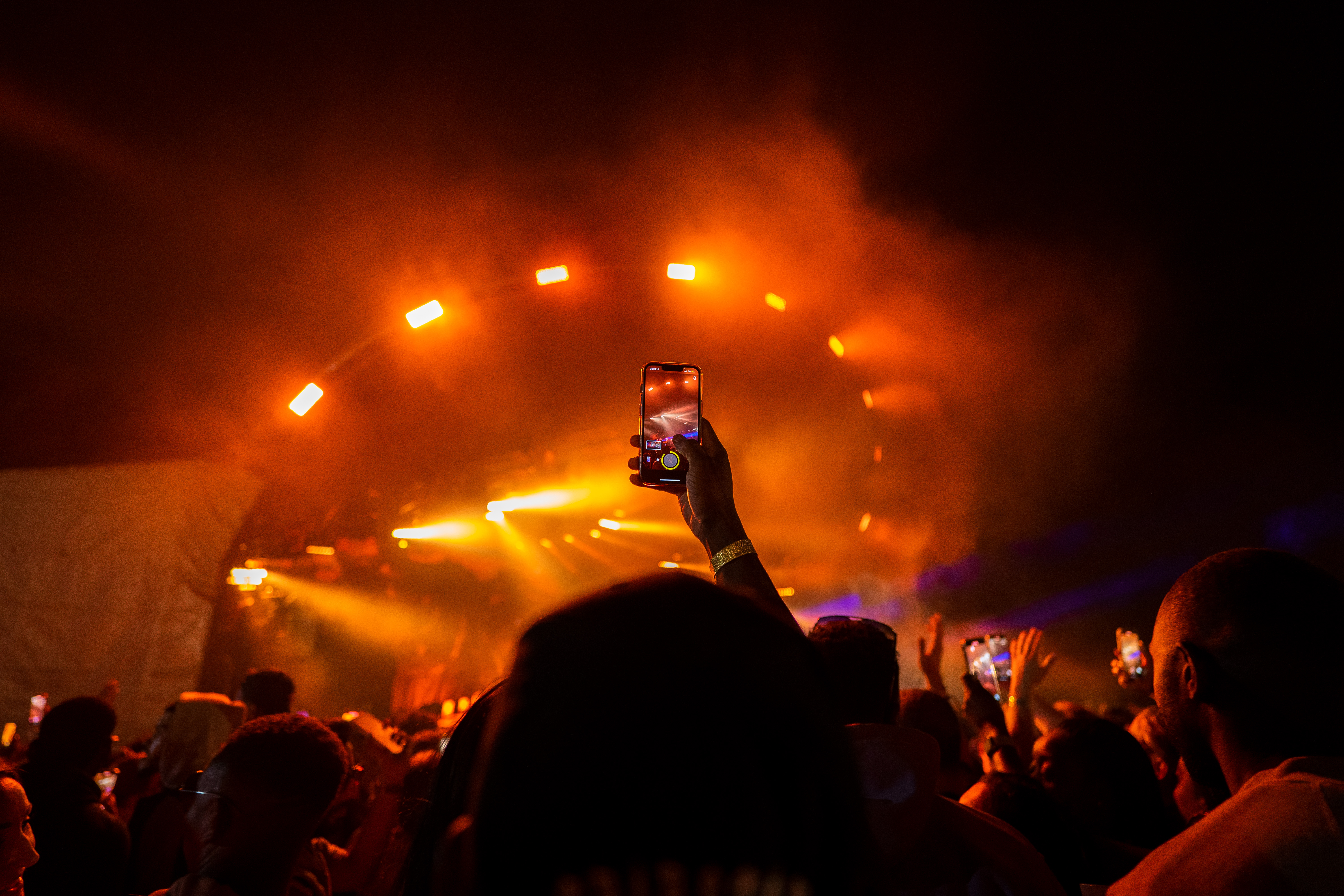 Whether you’re shooting an event in low-light, a landscape scene or vlogging, I found the AF performance of this lens consistent and fast. 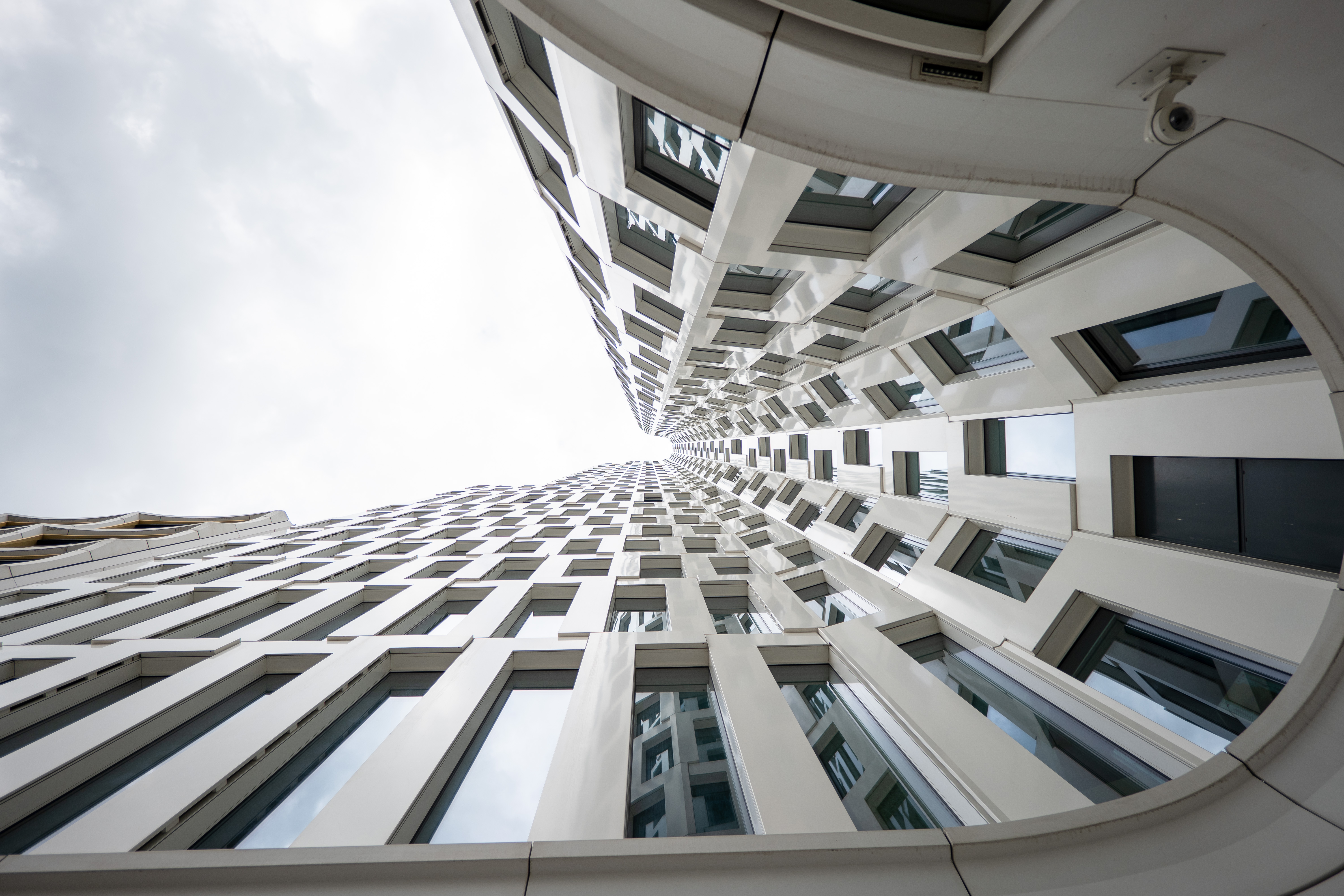 On seeing the specs of this lens, I expected there may have to be some compromises in terms of either AF performance or image quality. But as we’ve just confirmed in the previous section, AF performance was solid in testing. So on to image quality. How could such a compact and lightweight lens be engineered to deliver on the stellar image quality we’ve come to expect from Lumix S-series lenses?

While we can’t answer the how, we can certainly confirm that this lens delivers, pretty much across the board. Chromatic aberrations are kept to a minimum across the frame. There is little colour fringing around lines separating high contrast areas, such as branches set on the background of a bright sky.

Sun flares or ghosting are also suppressed effectively. While they are visible when shooting directly into key light sources, they don’t distractingly dominate the frame. 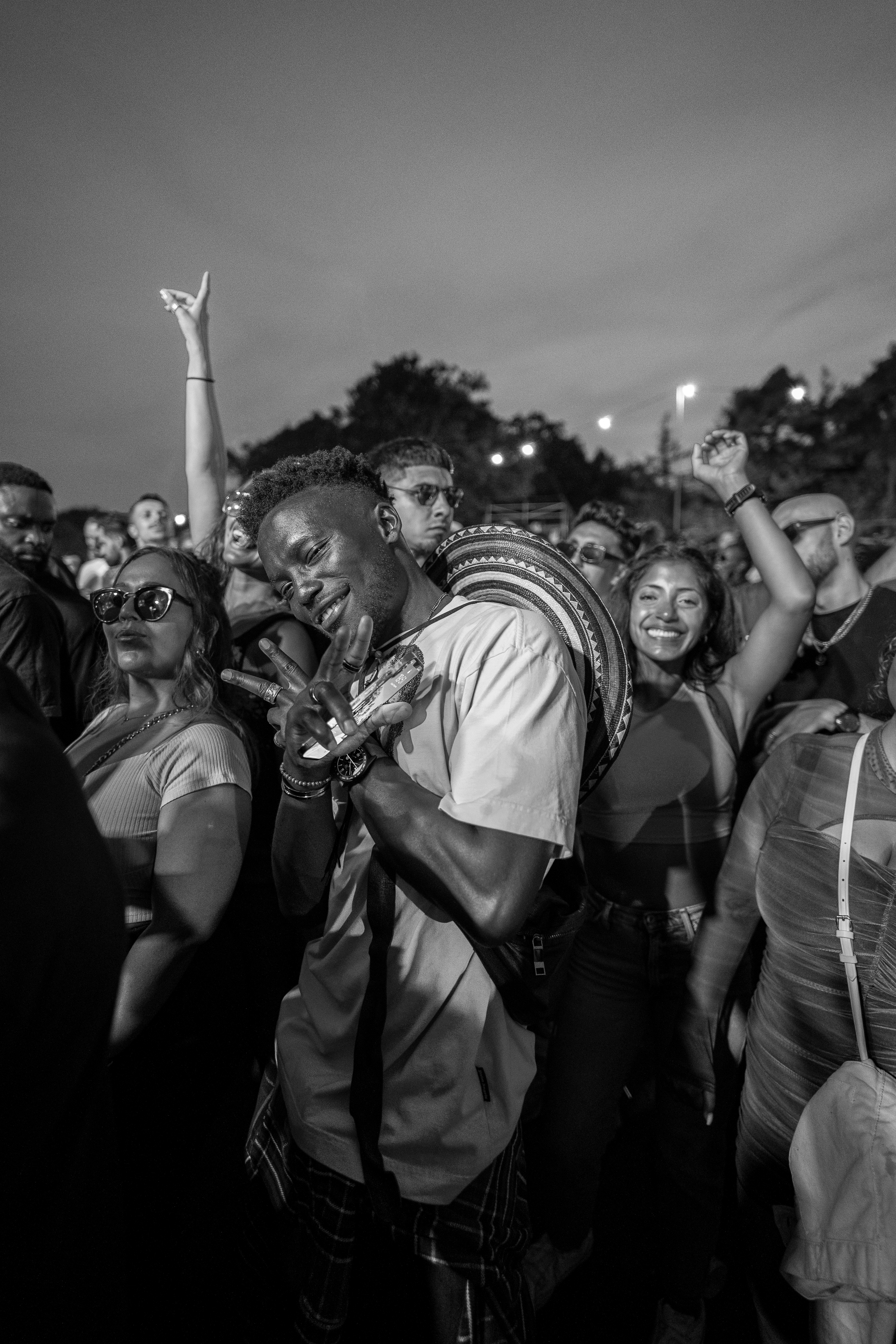 While shooting in the sunlight, stopping down to f/4 and beyond will improve contrast, and ghosting will be all-but eliminated. This lens also creates relatively sharp and attractive sun stars if that’s a look which appeals to you.

In terms of out-focus-highlights, the bokeh from this lens is silky and uncomplicated, delivering attractive results in the instances tested. At its maximum aperture you do see some elliptical shaped highlights. However, this is typical when shooting at wider focal lengths. It is worth noting they’re less prominent from around f/2-2.8. 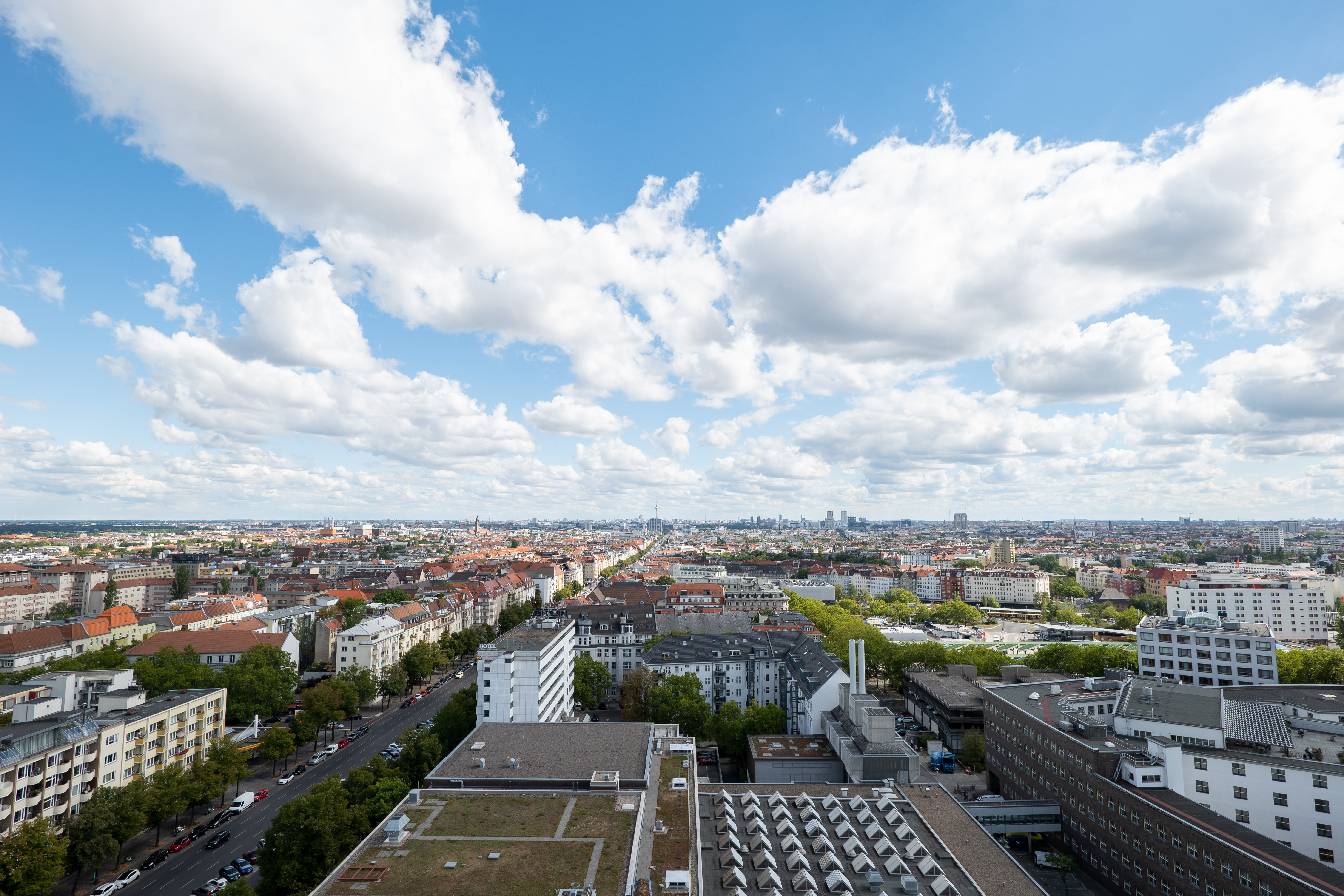 Crucially, overall edge-to-edge sharpness on the Panasonic Lumix S 18mm is impressive. Particularly, if you have diffraction compensation turned off within your camera, as that will soften the corners of your image slightly. However, stopping down to f/2 and beyond is also recommended when making the most of this lens’ 18cm minimum focusing distance. This is because it’s not at its sharpest close-up at f/1.8.

For its size, weight, overall versatility and price, this lens delivers professional-level image quality that will not disappoint in general use. Its only weakness is in the specialist field of astrophotography, where it doesn’t seem to deliver the sharpest results wide-open.

It also appears to suffer from mild comatic aberrations (coma). This causes the light from stars towards the edge of the frame to form a more conical shape, rather than a circular point. Again, stopping down slightly will reduce this effect and deliver better results.

Panasonic has created an incredibly strong family of fast, compact primes for its full-frame S series cameras, with this latest S 18mm F1.8 defying logic to maintain the high bars for image quality and performance set by its predecessors. Making direct comparisons of this lens is tough as it’s the only lens of its kind that is available for L-mount cameras.

But there’s some close competition if you’re only in the market for a single, fast ultra-wide lens. Competition is strongest in the form of Sigma’s line up of 20mm primes; the Sigma 20mm F2 DG DN Contemporary; the huge, but optically sublime Sigma 20mm F1.4 DG HSM Art lens; and the latest Sigma 20mm F1.4 DG DN Art lens, which promises astrophotography-specific benefits.

However, if you own a full-frame L-mount camera, enjoy photographing ultra-wide vistas, day and night, this lens is wonderful. If you create video content and would consider buying any one of the other f/1.8 series primes, the S 18mm F1.8 is simply a no brainer. It’s a fantastic, versatile lens that manages to deliver handsomely on its primary use cases.