Pros: Compact, light and suitable for travel
Smooth video
Made with the serious content creator in mind
Easy to use features and buttons 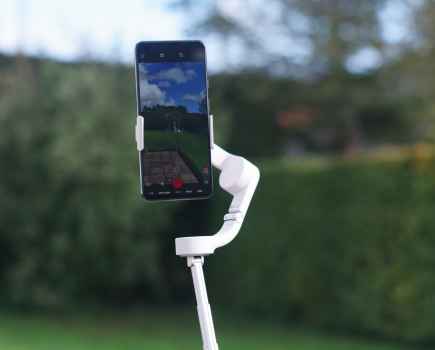 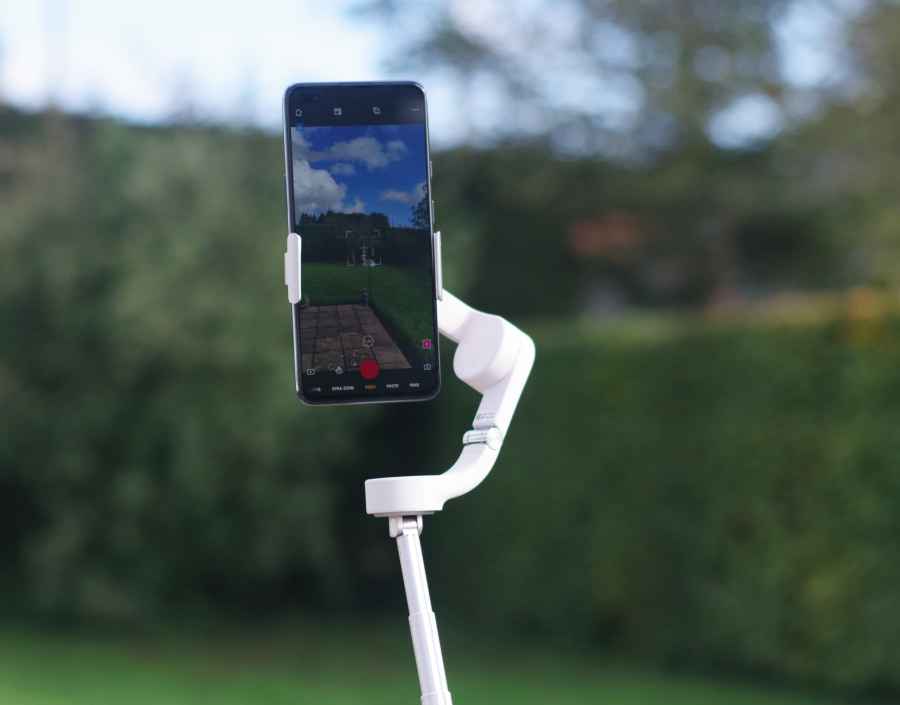 Pros: Compact, light and suitable for travel
Smooth video
Made with the serious content creator in mind
Easy to use features and buttons

DJI OM 5 Gimbal at a glance

The DJI OM 5 retails at 139 GBP/ from 159 EUR (subject to local taxes). The Fill Light Phone Clamp is sold separately for the retail price of 42 GBP/49 EUR

The DJI OM 5 is DJI’s new and improved gimbal designed to take smartphone content creation and videography to the next level.

As DJI’s latest addition in the Osmo Mobile series, the OM 5 has been given a series of upgrades since the DJI OM 4 was released in 2020. Firstly, the OM 5 is smaller and lighter than any of its predecessors. The OM 5 has also been given a new phone clamp, compact design and built-in extension rod. 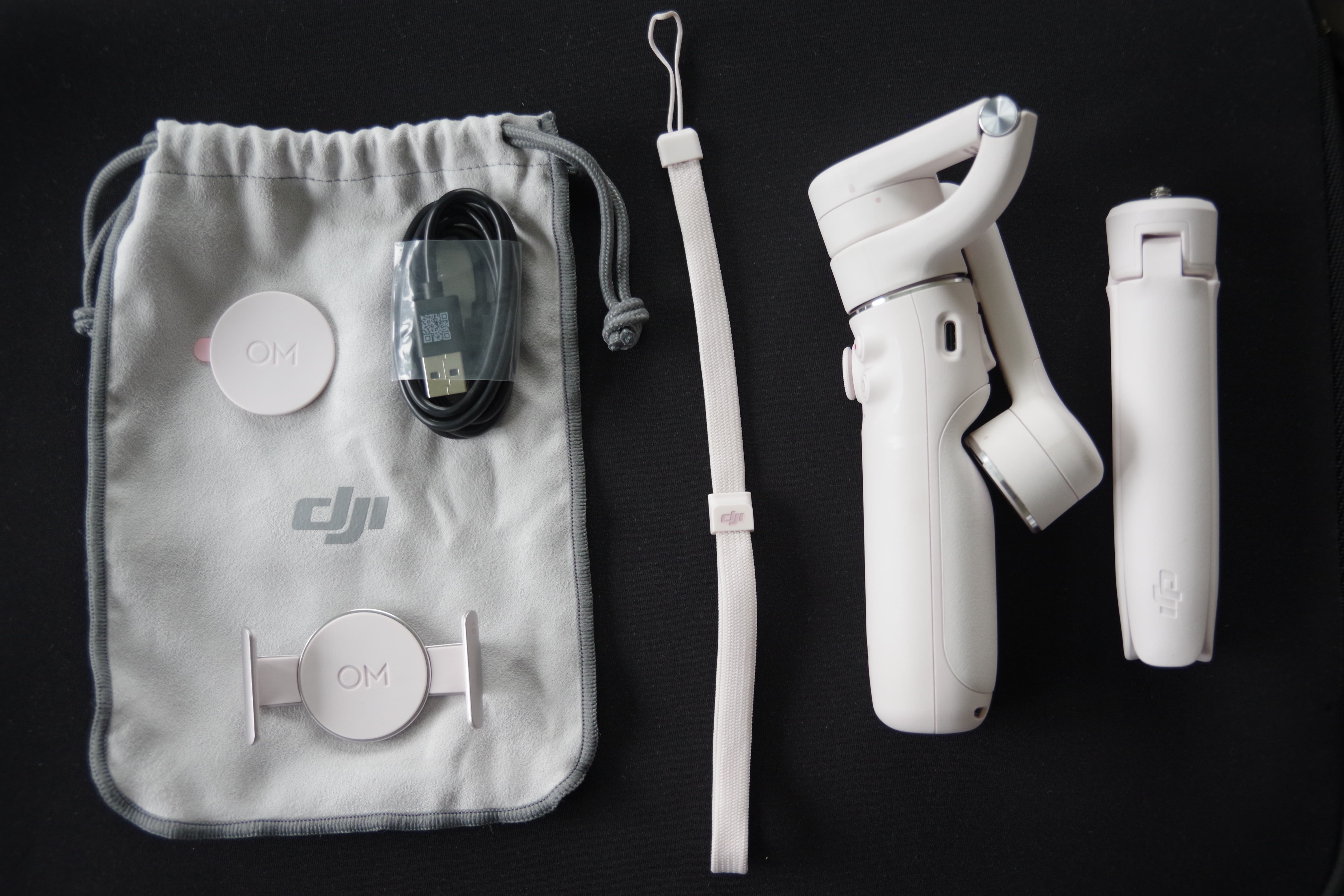 What’s in the box?

The OM 5 comes in two colours, Sunset White and Athens Gray. For this review I was sent the Sunset White version. Although the white gimbal (which has a very light pink tinge) looks very smart, stylish and aesthetically pleasing, the colour is not ideal to keep clean. However the carry pouch is very handy to avoid it getting dirty on the go. 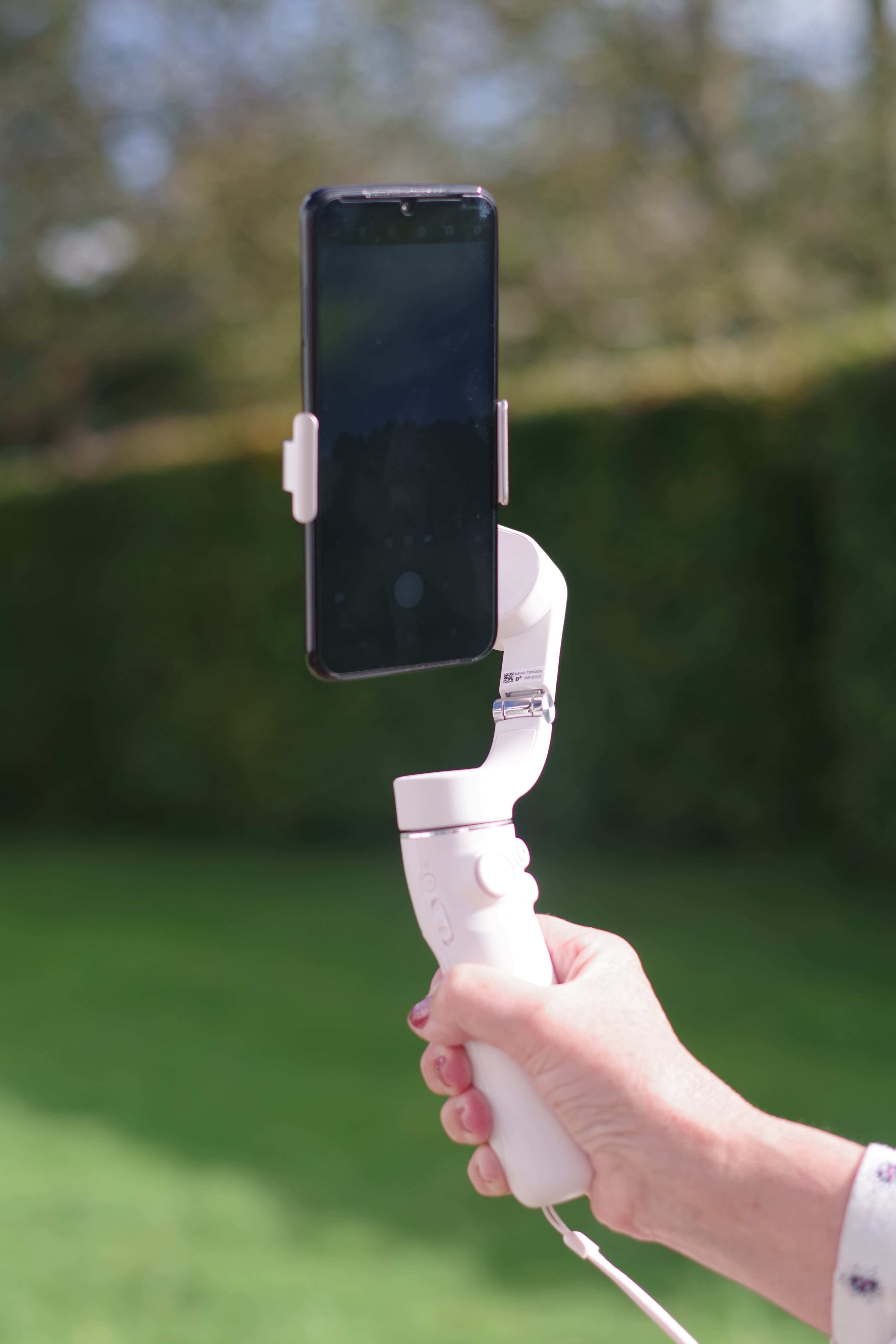 The gimbal’s handle features a standard tripod mount, rear trigger, thumb joystick, record and switch orientation buttons and zoom slider. It uses the magnetic mounting system introduced for the DJI OM 4, so you can snap your phone on and off with ease. The handle of the gimbal is ergonomically designed, for my small hands especially I found it easy to grip. The curves are soft and natural with a moulded back where I could place a finger when gripping. 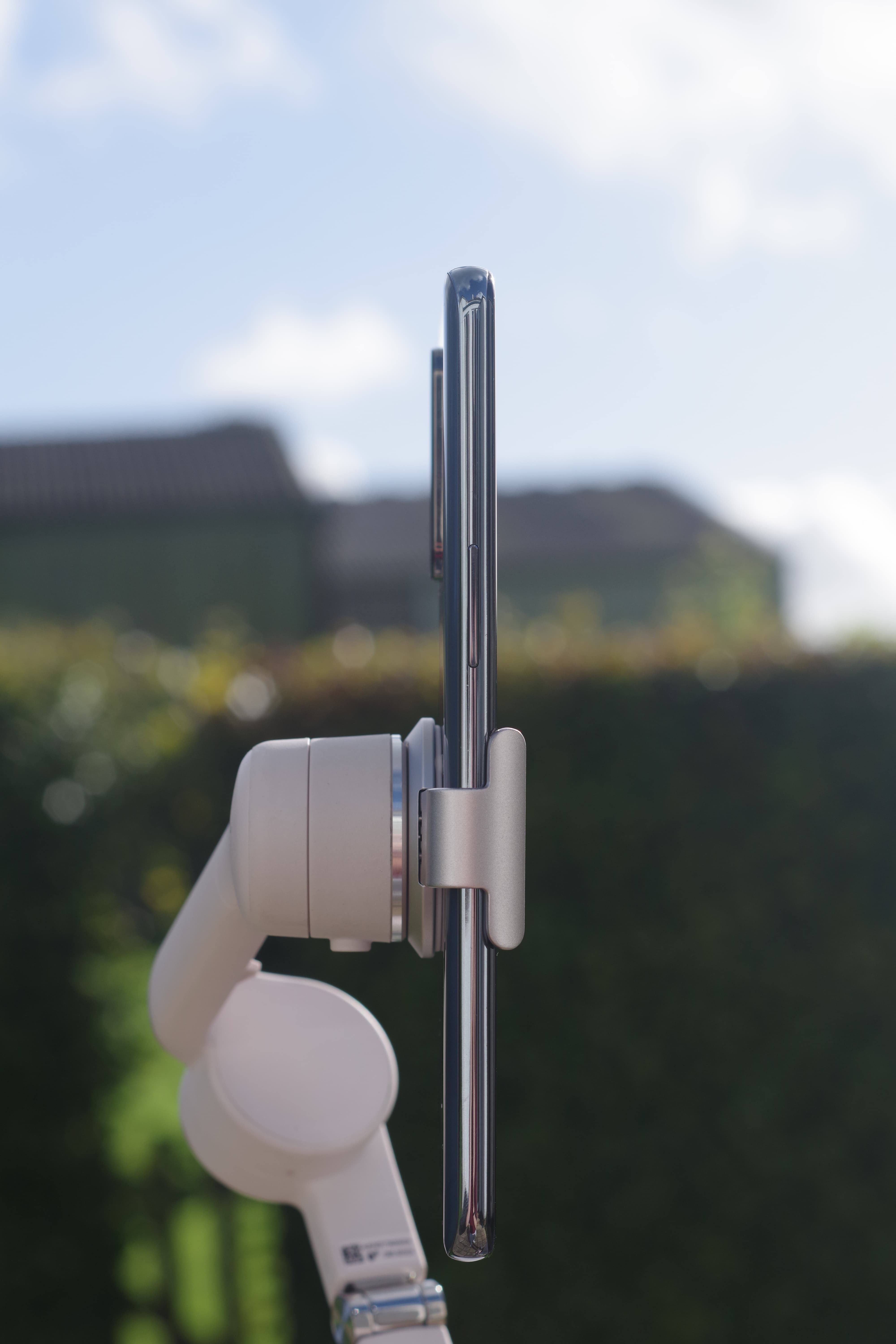 For the first time the gimbal includes an extendable rod, which transforms the gimbal into a selfie stick. The rod is self-contained within the gimbal handle, and although it was quite stiff to pull out, it extends up to 21.5cm. 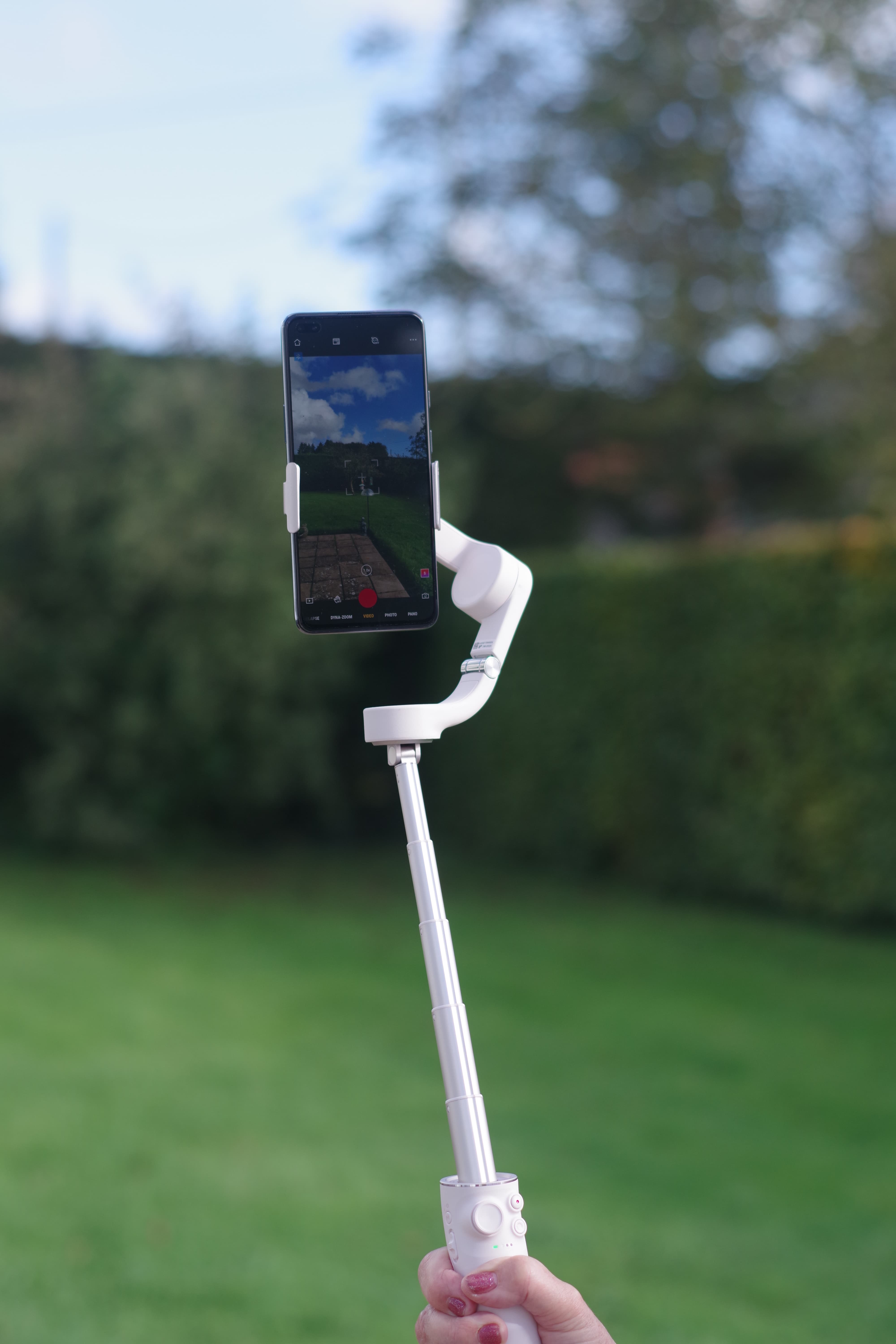 A big positive for the gimbal is that it is compact and travels well, thanks to the folding arm. I was sent the gimbal by DJI for use at The Photography Show but in the timeframe of this review, I have also been able to make use of it when attending other events and creating video content for AP’s social media. It travelled well for the TPS weekend and day trips, and all the additional accessories fit in the carry pouch – perfect for slipping into your rucksack or handbag.

For the review I was using my OnePlus Nord phone. The clamp can accommodate thicker and bigger devices, so if you use a case on your phone you do not necessarily need to remove it; but as I use a flip case on my phone, I chose to take it off when using. 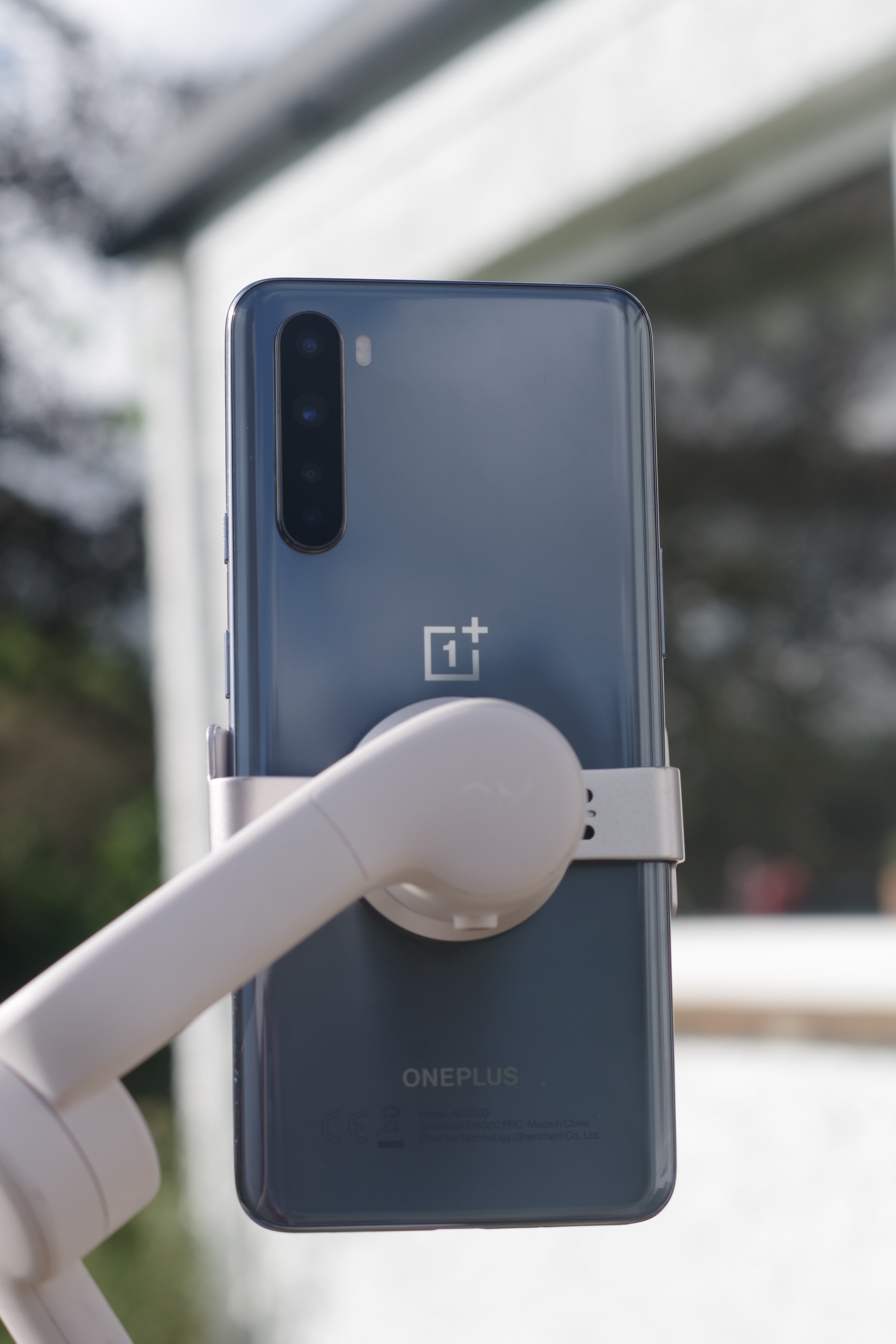 To start with I had difficulty when connecting the gimbal to the DJI Mimo app, meaning I couldn’t use all the features, and shooting modes e.g. Hyperlapse, as designed. But I was able to take video and photos in the app through LiveView, plus try some of the features including Dyna-Zoom and Story. The gimbal also worked with my phones native camera application. The buttons on the gimbal made it easy to us, I could record video and take photos, zoom in and out, pan around, switch from portrait to landscape, front to back cameras etc, all with one hand. 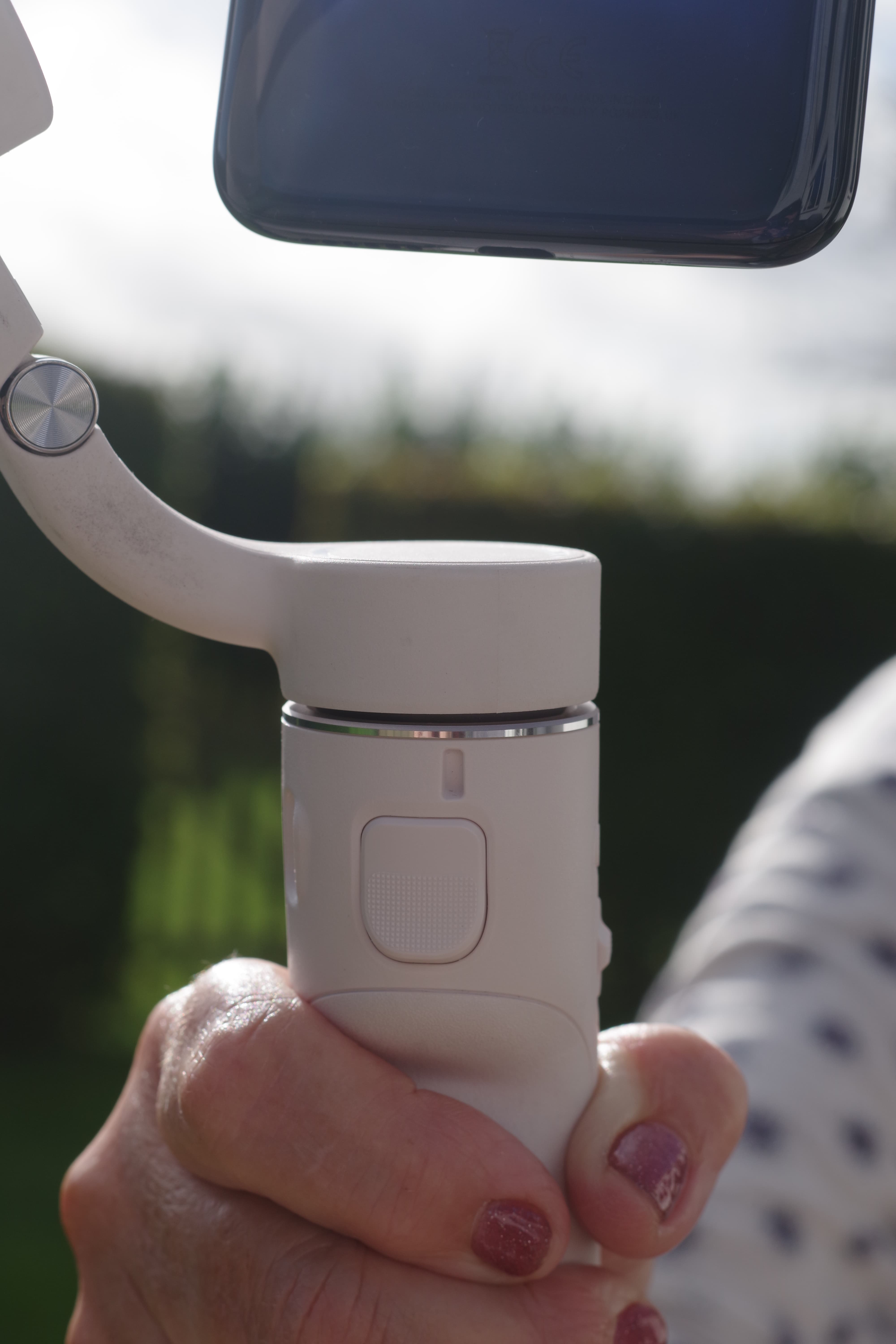 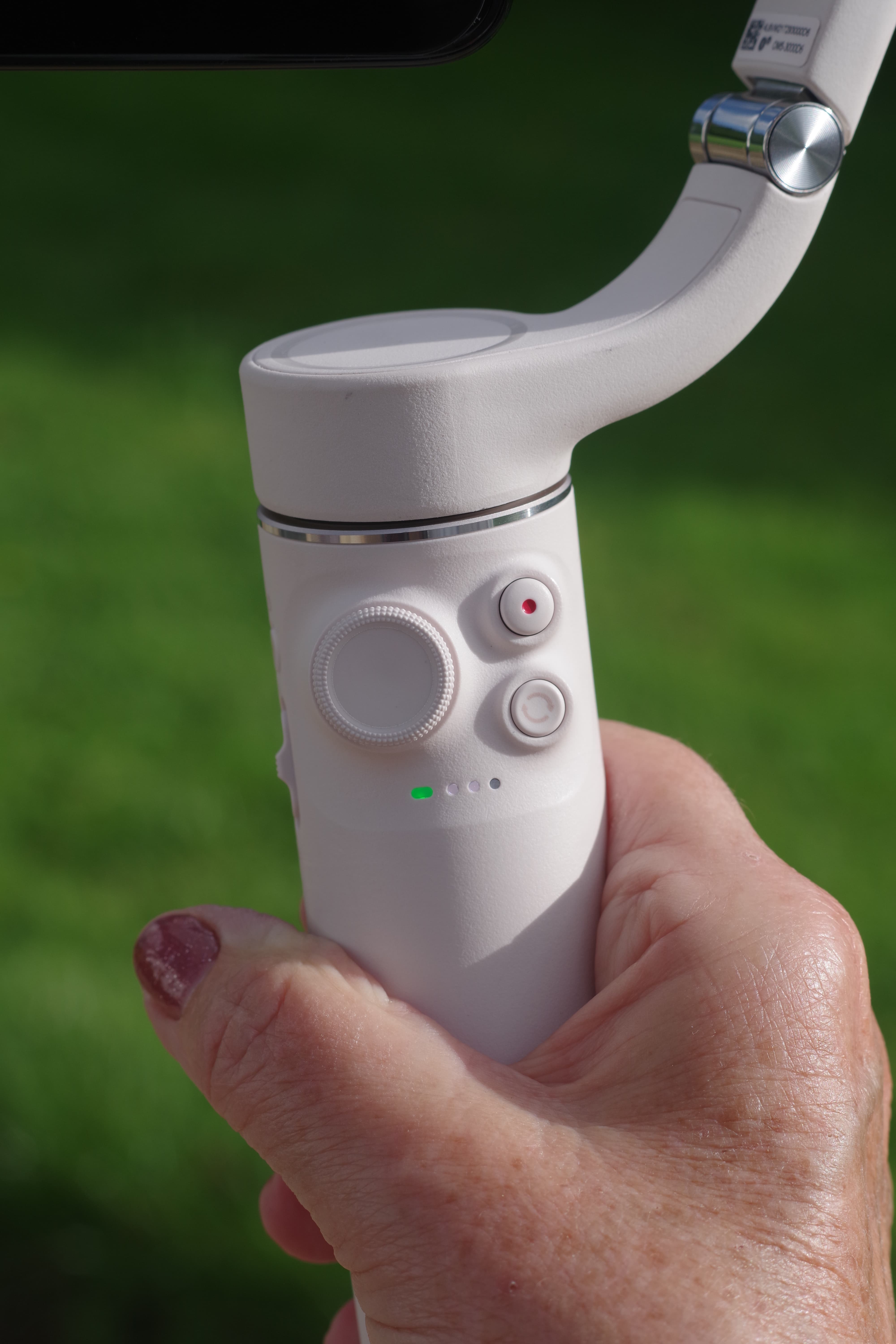 Unfortunately, the connectivity problem was something I had throughout my time using the gimbal. I also tested with an iPhone to see if this was a general issue, but this wasn’t a case. For Apple, the DJI Mimo application was fully working, the phone connected with the gimbal and I was able to use all of the shooting modes, buttons and other features properly. If an app update for Android is in the pipeline, then this will become a more attractive accessory for Android users like myself. 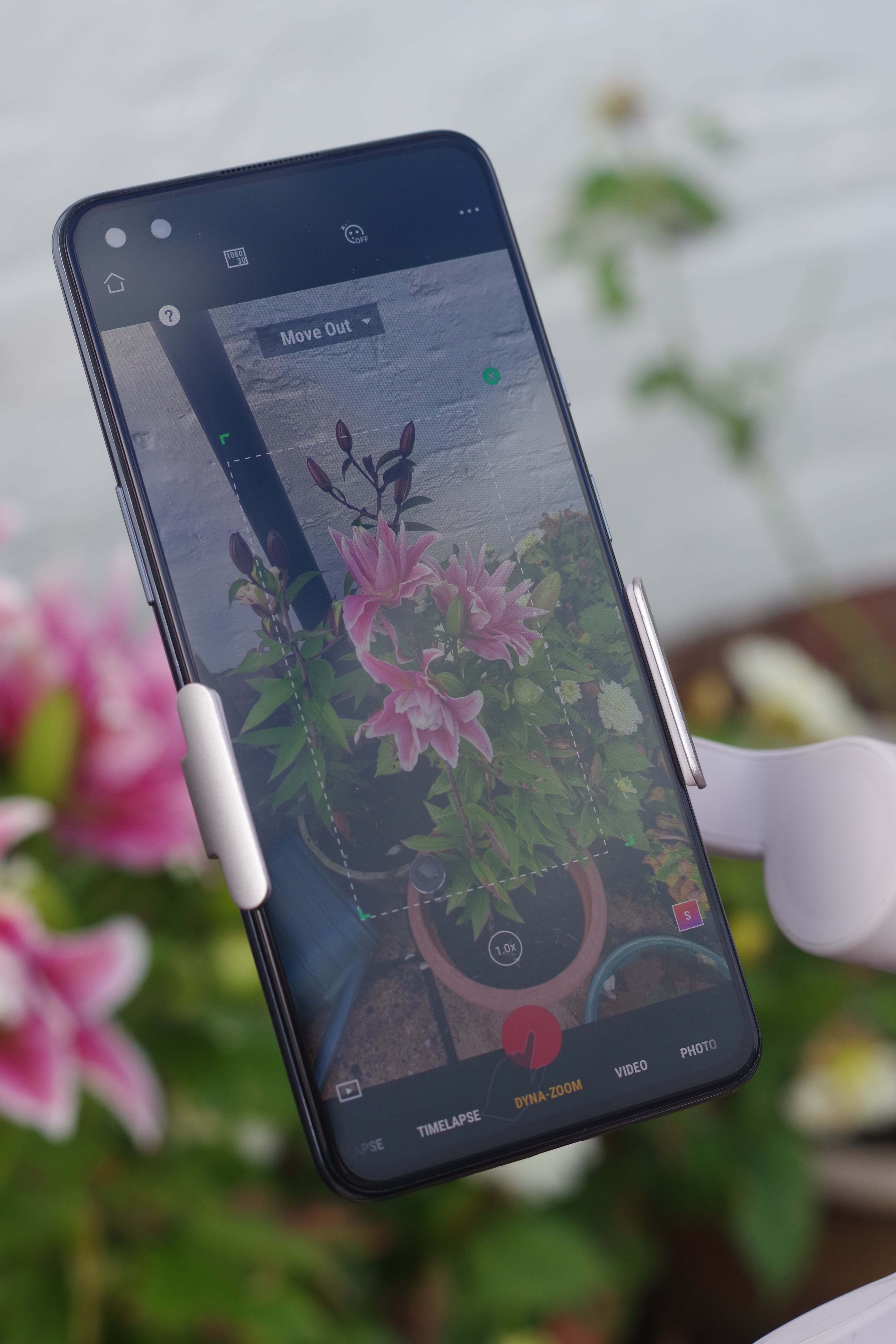 The three-axis mechanical stabiliser keeps the phone in place as you walk and move around, which is great for filming at events. I produced smooth video without the shaky effect action/movement from walking or from an unsteady hand when standing still.

Within the Mimo app, if your phone supports it, video can be recorded in up to 4K resolution. However, whichever resolution you film at, you can only shoot at 30fps. The tripod is a useful accessory as expected when filming yourself, and also when using the Gesture Control feature. 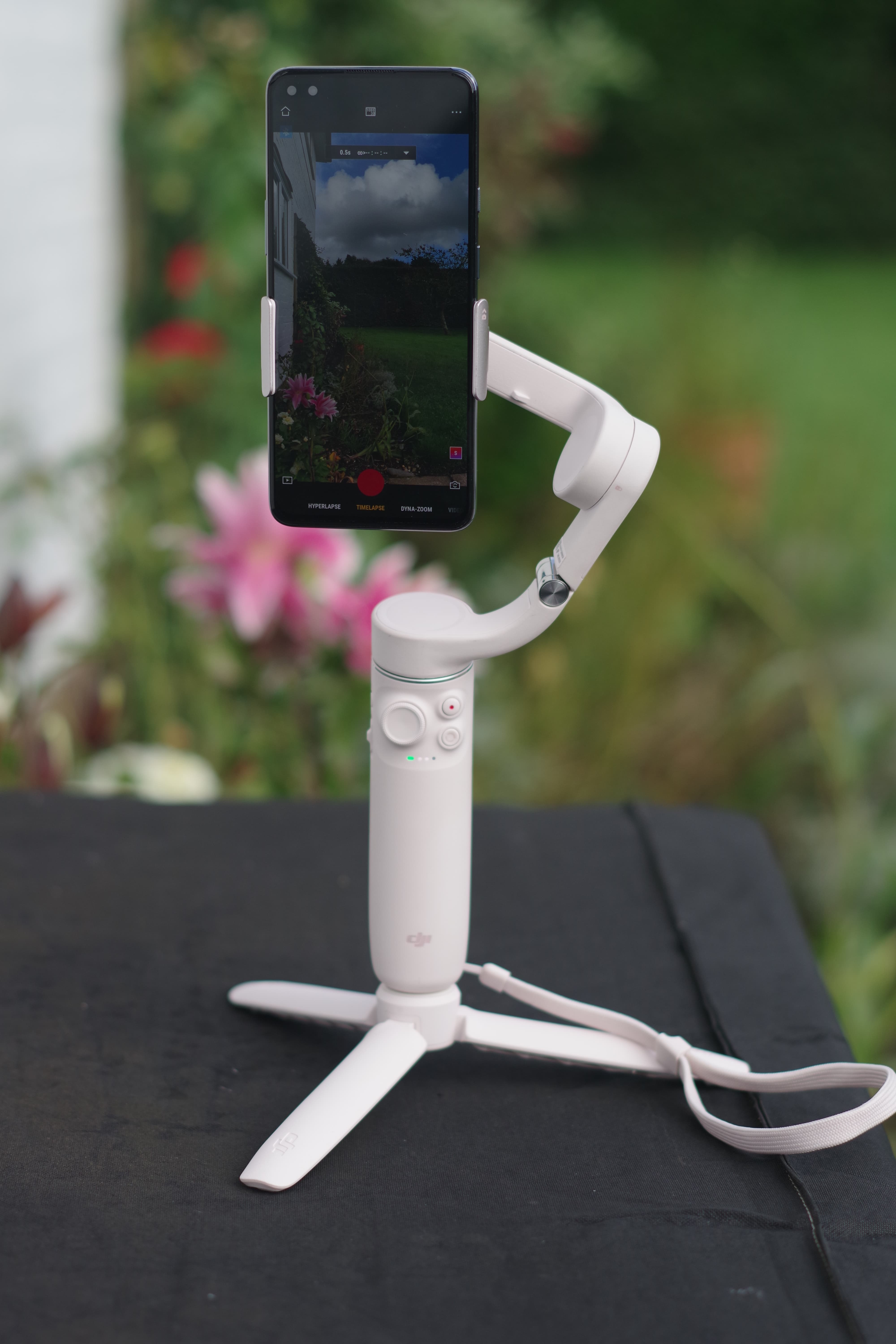 Turning the gimbal heading and tilting up and down is made easy with a joystick on the handle. It’s great for panning, but it doesn’t go the full 360 degrees. This movement can also be slowed in the app if slow panning is the effect you are after. 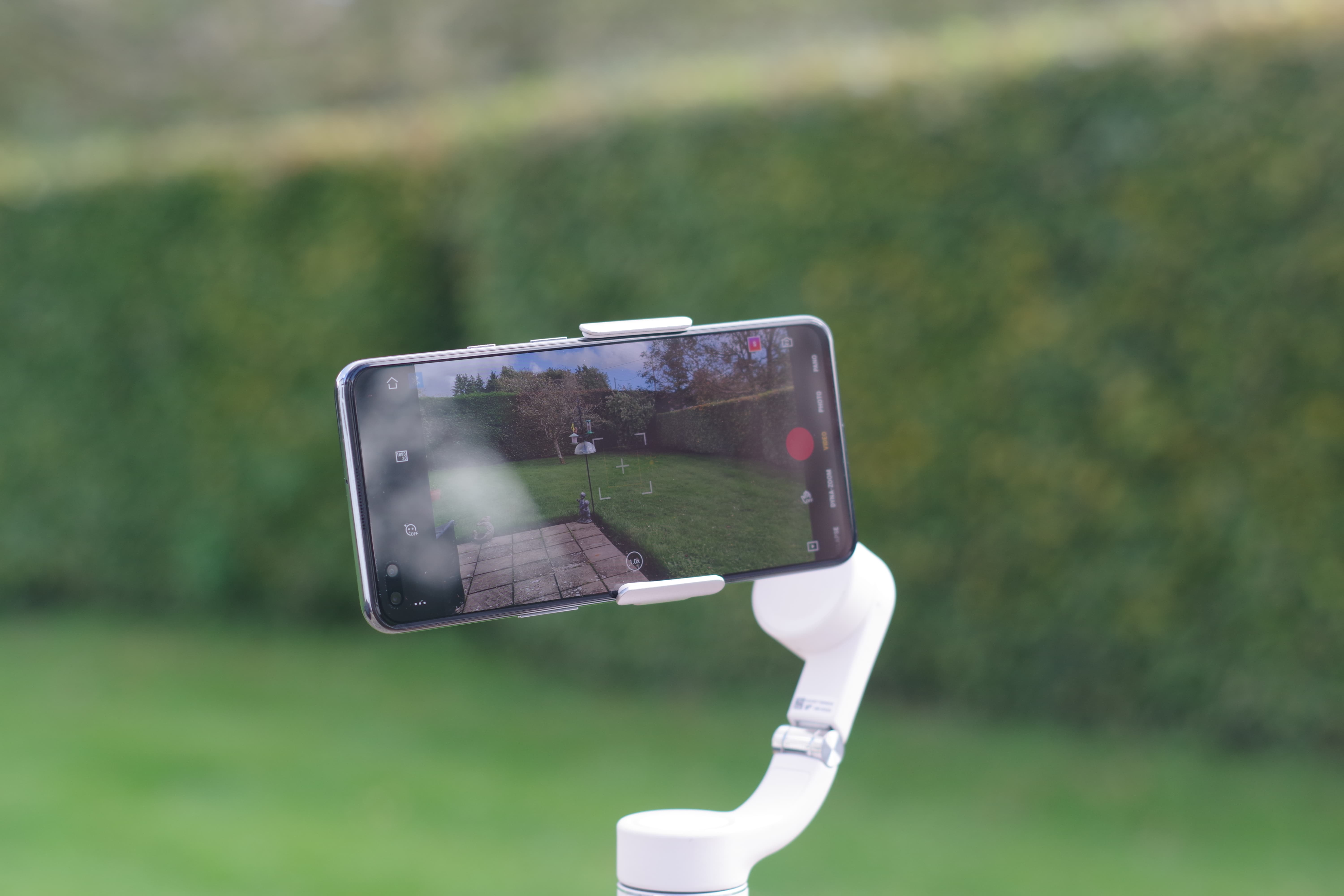 Although it has its benefits and the concept is great, the folding arm was not easy to manoeuvre. It had to be turned and moved at a particular point to fold and unfold in the correct position, so this made it quite awkward to use. 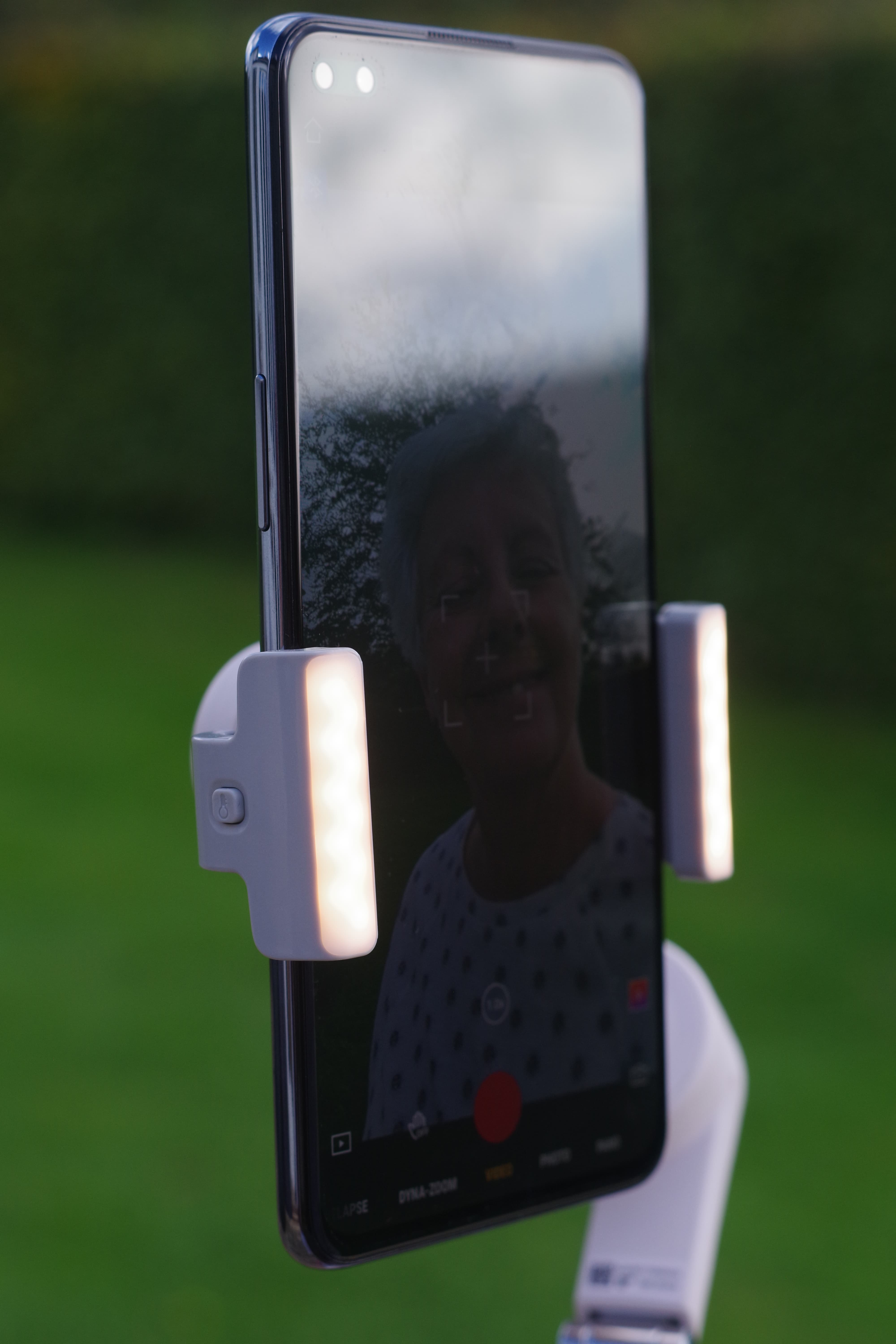 I was also given the Fill Light Phone Clamp, an independent accessory compatible for both the DJI OM 5 and the OM 4 models. It features two built-in LED auxiliary lights strips either side with the option of three different lighting tones to change between. These were bright and would be great for those vlogging or doing selfie style video/image creation and low-light situations. However, the light clamp is an optional accessory and is to be purchased separately.

As tested at TPS, the gimbal lasted all day with on and off use, without using all the battery. According to DJI the battery life is approximately 6 hours. It took about 90 minutes to fully charge and the three LED dots on the handle let you know it is switched on and estimated battery life. 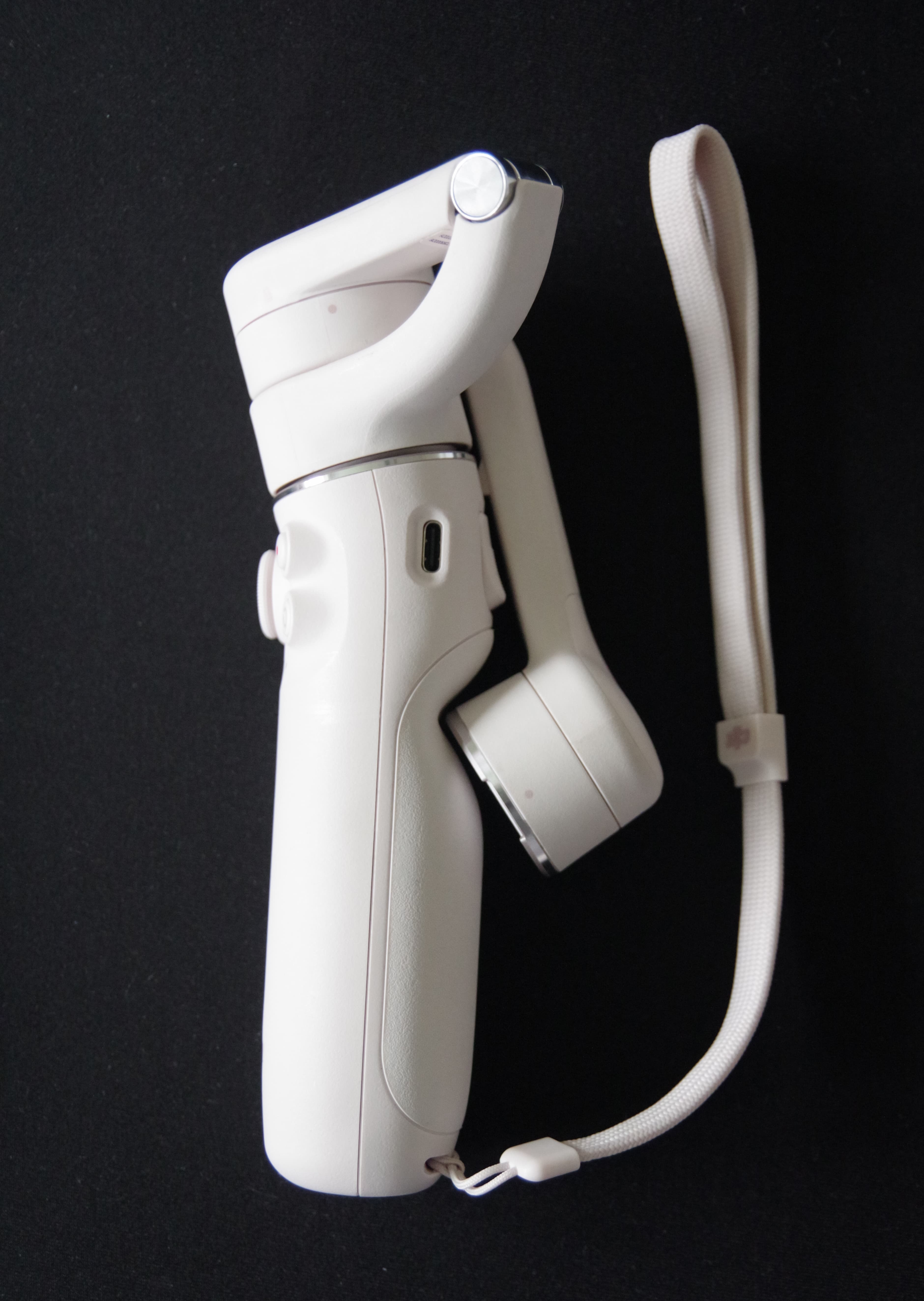 The DJI OM 5 is expensive within the gimbal market and despite my connectivity issues, it is a smart and versatile piece of kit for serious content creation and smooth sleek video – I had several people come up to me at TPS to ask about it. If you are looking for something more basic and are not interested in the additional extendable arm, then the OM 4 SE or another piece of kit from the DJI Osmo range may be for you.

DJI Pocket 2 at a glance

In my case, this piece of kit was extremely helpful for conducting quick video interviews with photographers at the Wildlife Photographer of the Year press event. Plus, it was more discreet to use than the OM 5 gimbal. 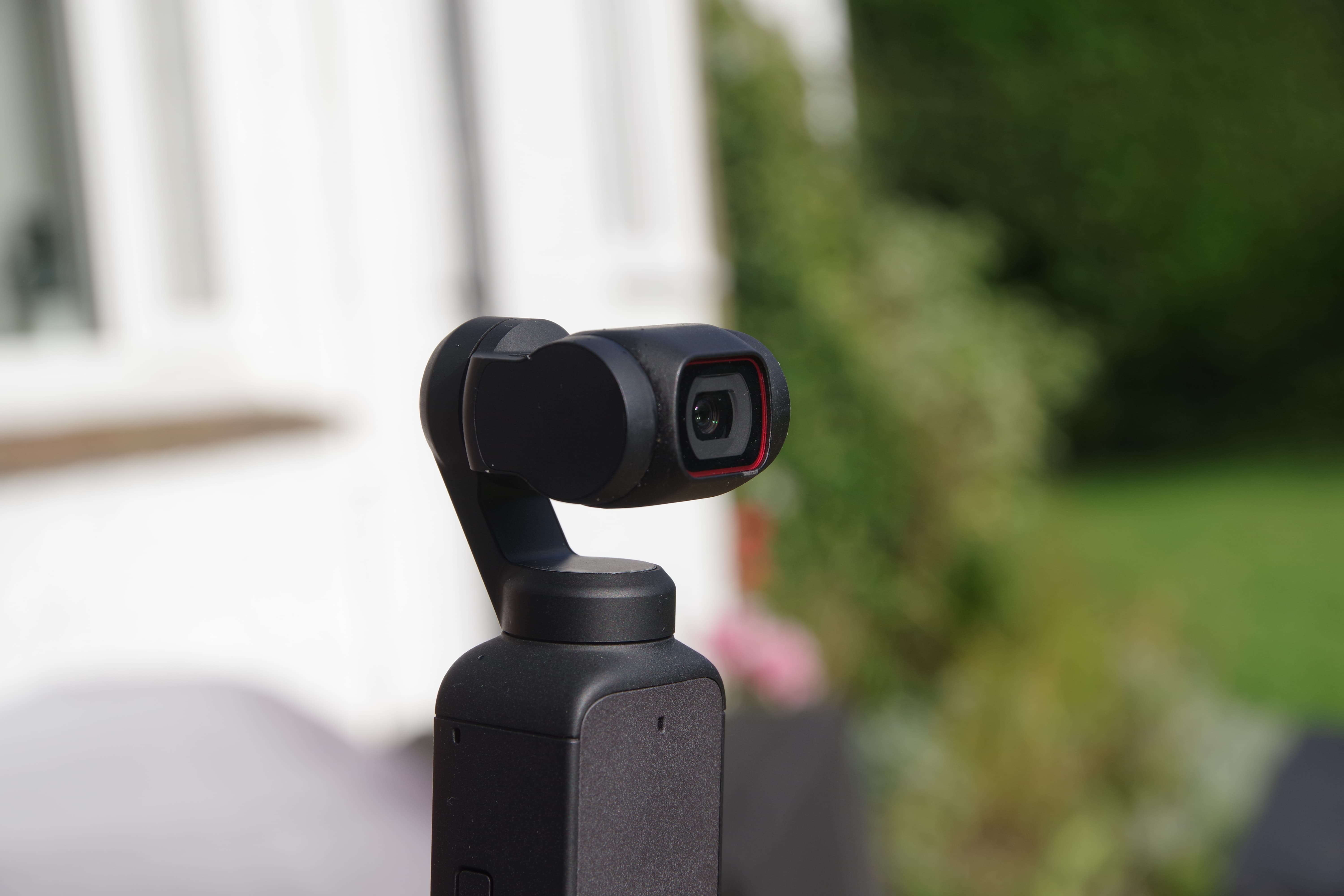 The additional DJI Pocket 2 Wireless Mic with Windscreen made recording interview audio easier in loud places and allowed audio to be picked up through the wireless microphone attached the interviewee, rather than built-in microphones in the Pocket 2. 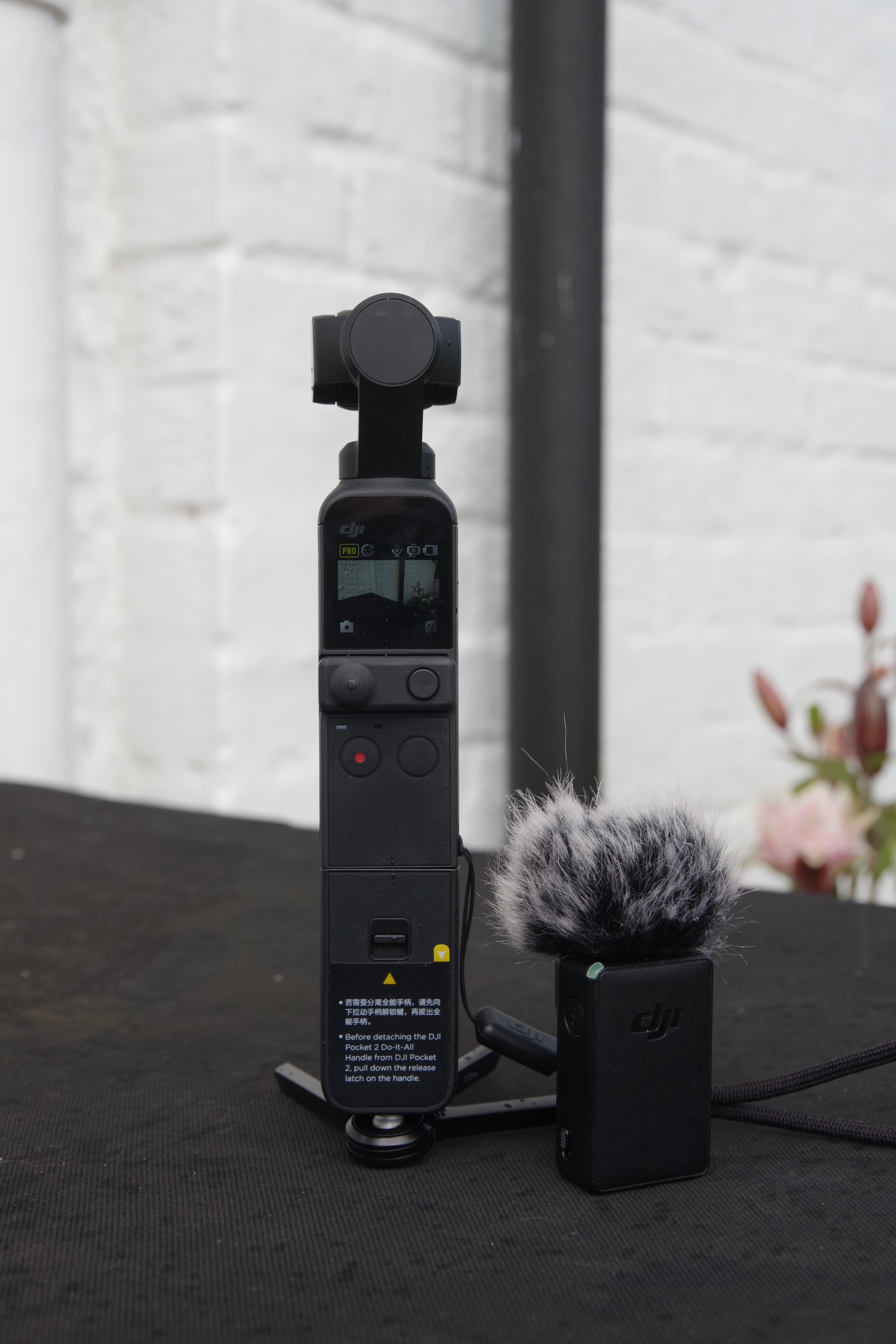 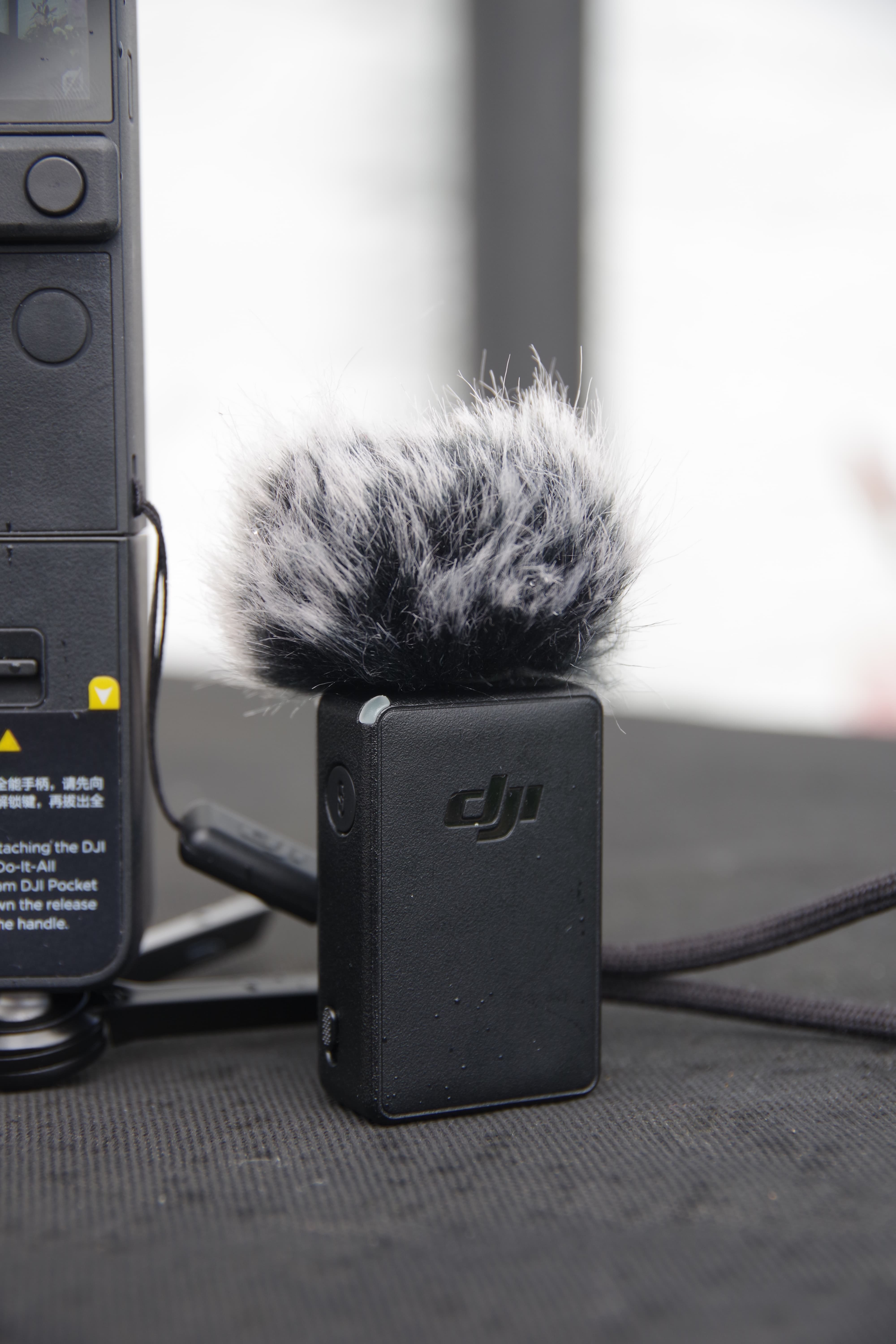 However, as seen in the videos from the WPY event, such as this one, the Pocket 2 doesn’t perform well in low light conditions. Shooting multiple high quality videos in a short space of time also made the device heat up and stop filming, even with full battery.

The preview screen is very small, and fiddly but is a touchscreen, and you can tap to focus on subjects within the frame, and zoom in. 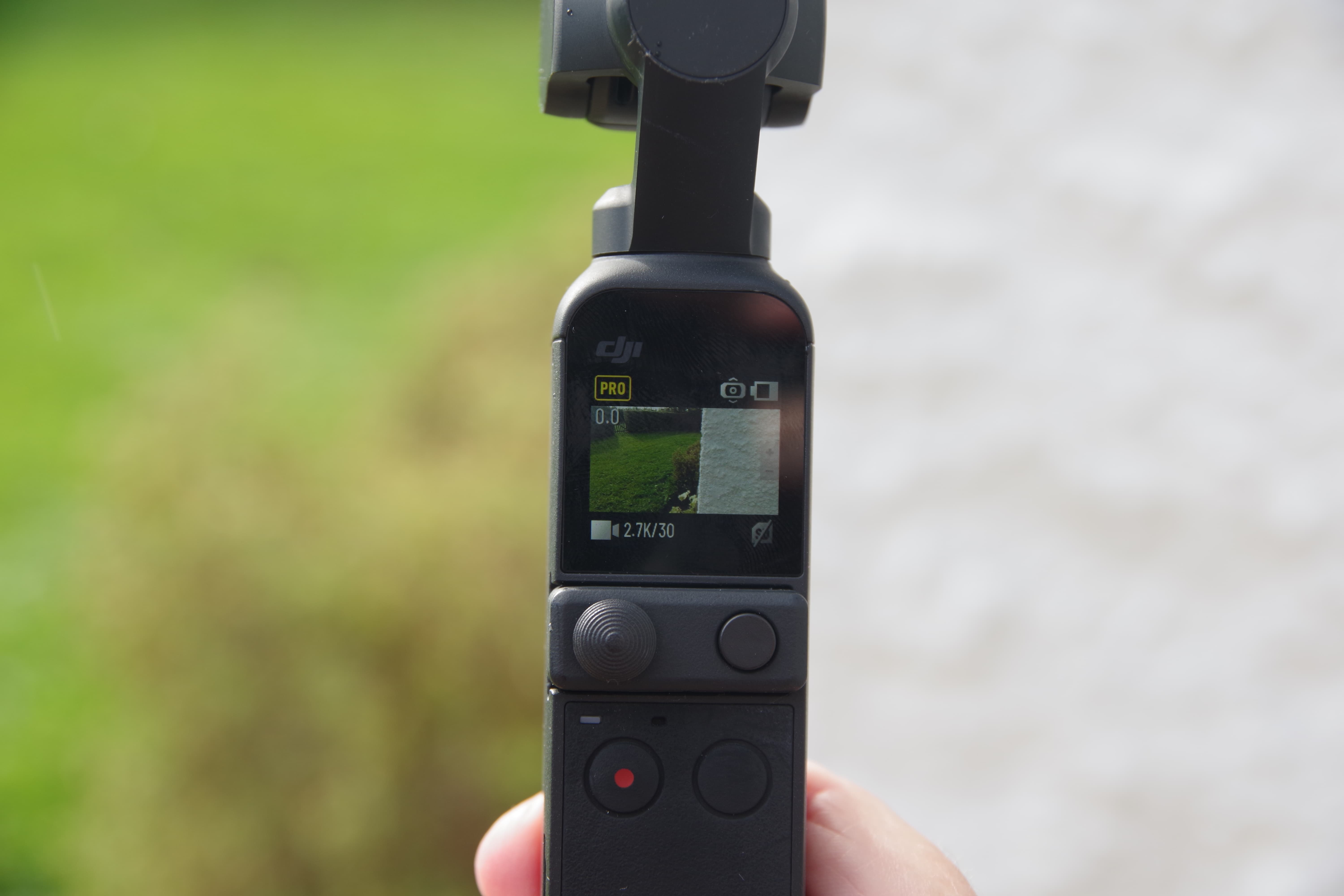 Like the OM 5, the three-axis stabilised camera handled walking and movement well, without any shaking. Video when panning was also very smooth. But there is some bouncing motion with each step when walking, see the video below. I tested the ActiveTrack 3.0 feature at the Action stage at TPS, and found that if the subject is small or fast it won’t follow accurately and would even lose the subject altogether.

The footage is also very grainy when zoomed in, but the sound quality is very good. The Pocket 2 performed better in brighter lighting conditions and outdoors. Like the OM 5, you can connect the Pocket 2 to the DJI Mimo app and also use your phone to view footage, adjust focus and take the shot.

It also has a great battery life, and you can adjust exposure, white balance and other ‘Pro’ settings. Using the button on the handle of the Pocket 2, in three clicks the camera is flipped around to film yourself.

Which is great for vlogging especially with the Face Track feature keeping the gimbal on you, this works much better than trying to track and moving subject you are filming – until you turn your head and the camera loses your face. A countdown is also available for timed photos.

The Pocket 2 I was sent also came with the Creator Combo, which included the basic bundle accessories of the Mini Control Stick, Wrist Strap, Pocket 2 Cover, smartphone adaptors and 1/4-inch tripod mount. Plus a Do-It-All Handle, Micro Tripod, Wide-Angle Lens, Wireless Microphone and Windscreen in addition. 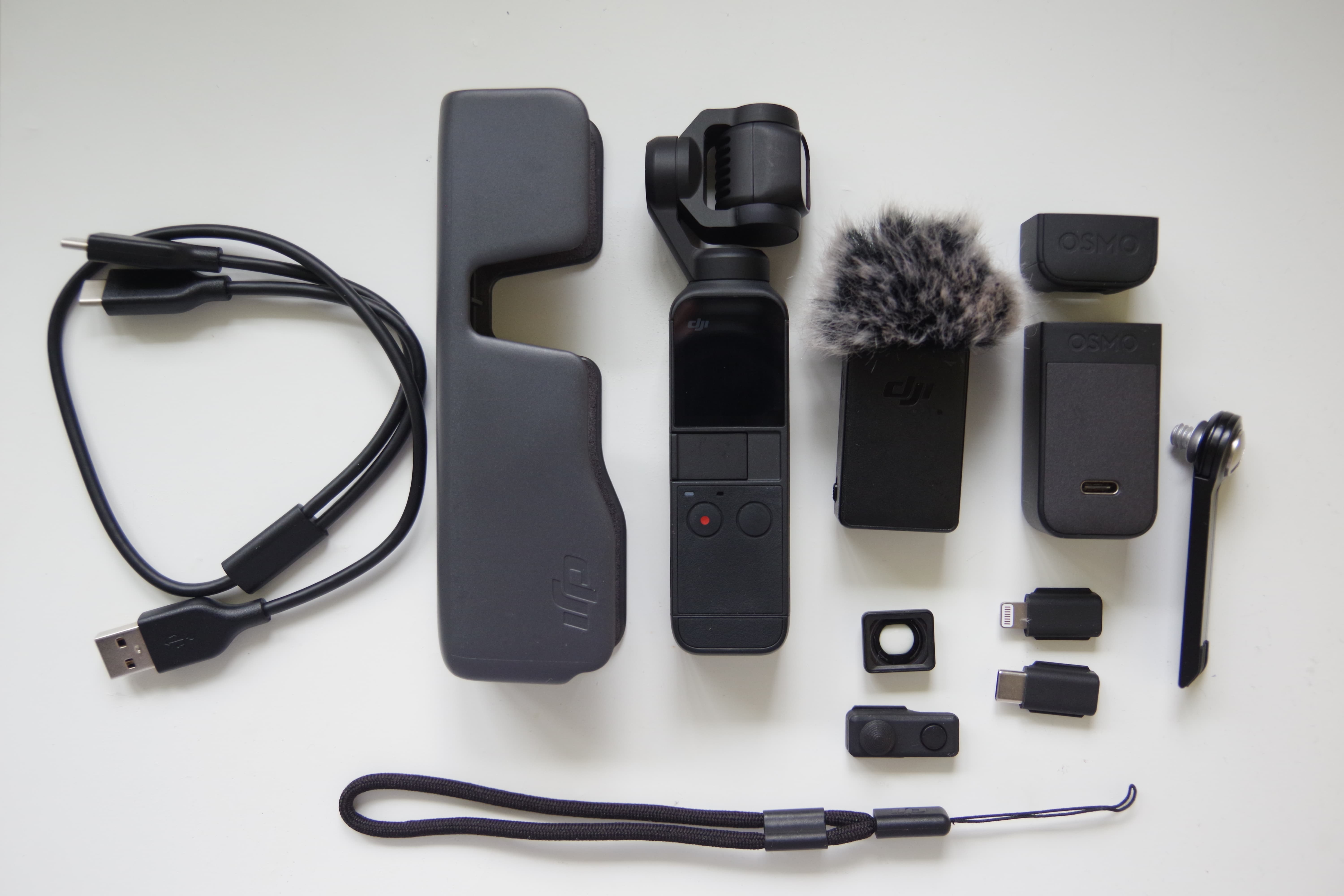 The Pocket 2 is a much more expensive investment than a gimbal like the OM 5. The Classic Black Pocket 2 basic combo retails at £339, but upgrade to the Creator Combo for the additional accessories and it will cost £469. Other accessories such as Osmo Pocket ND Filters are also available at an additional cost. 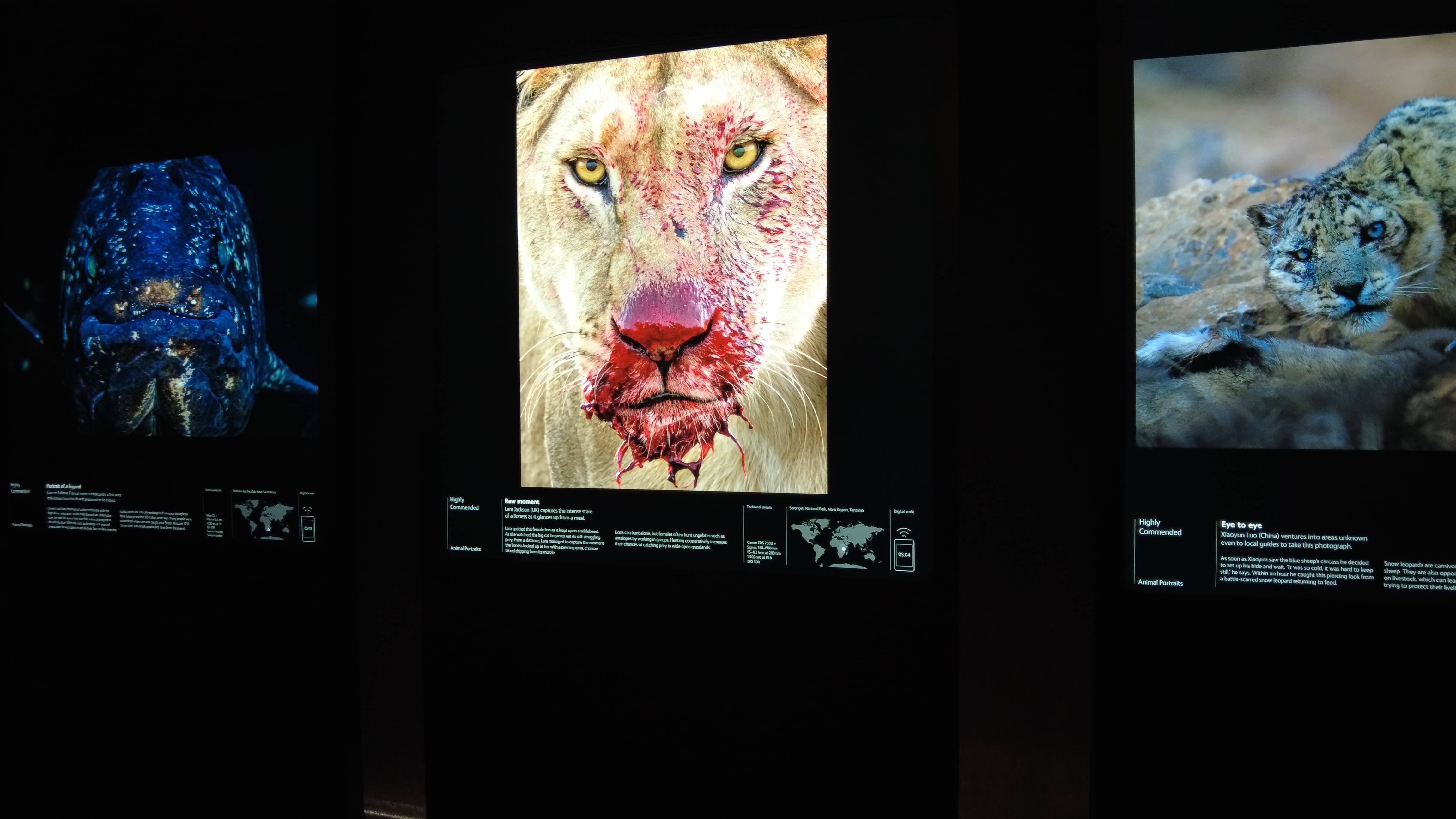 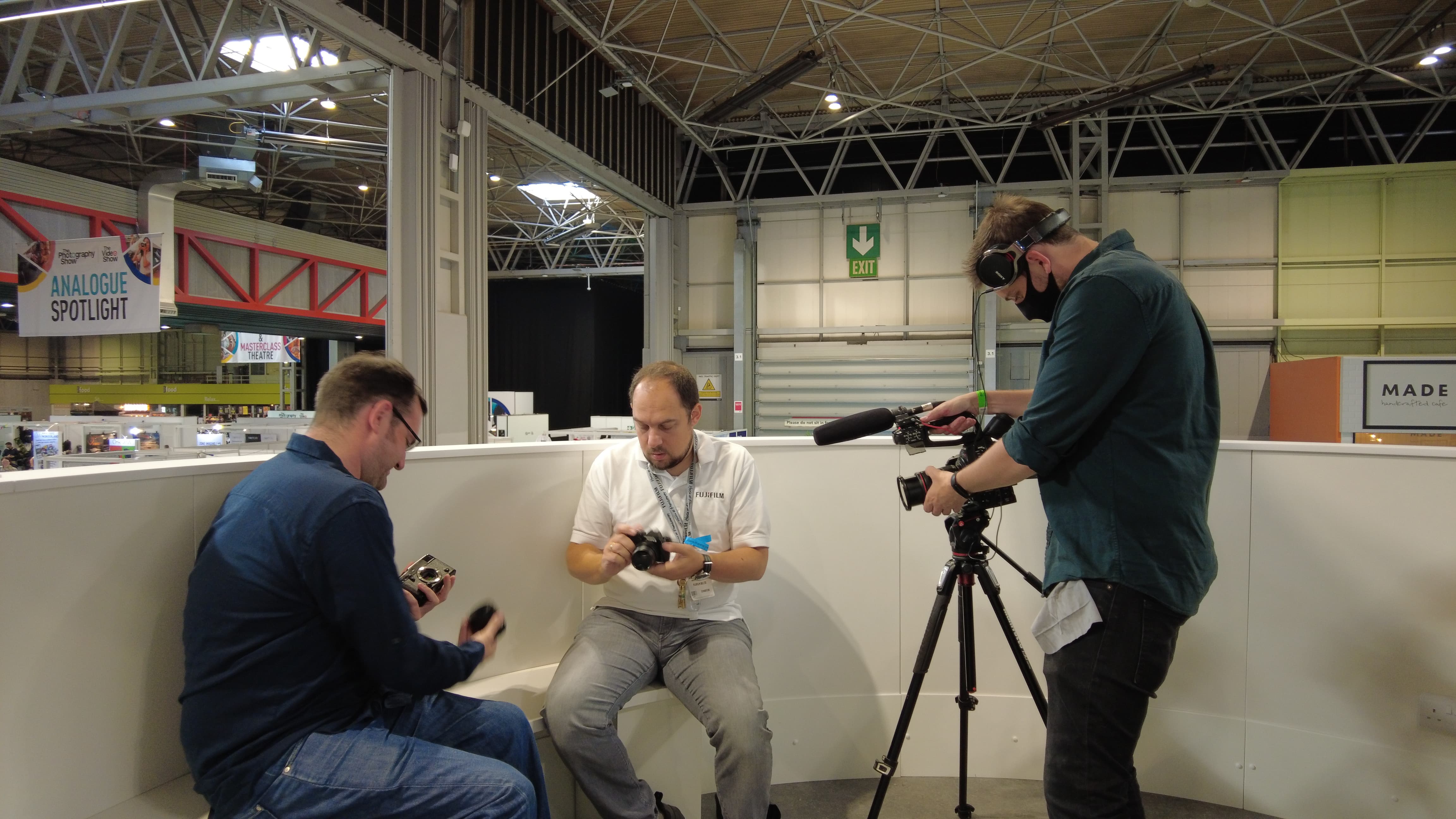 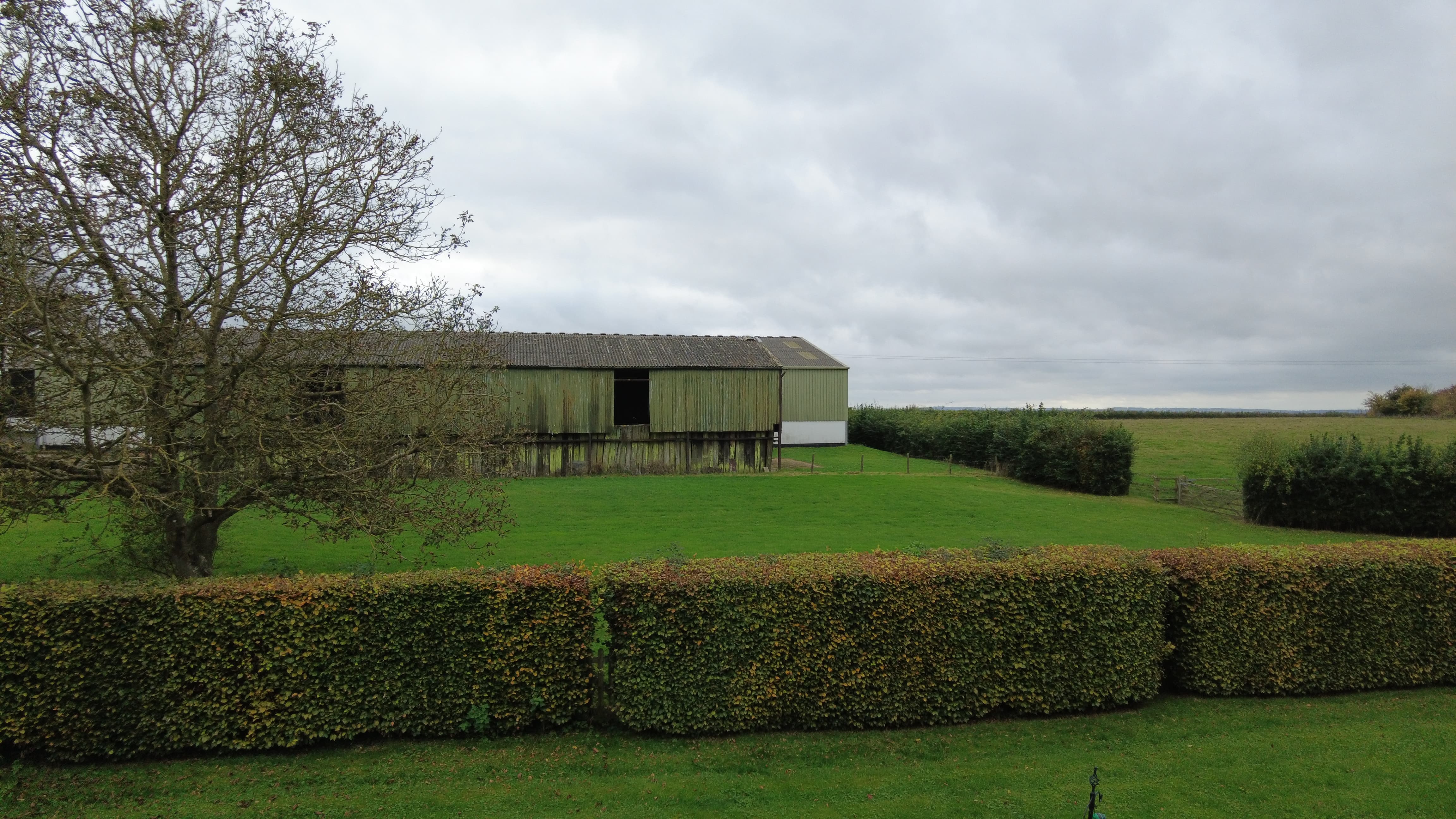