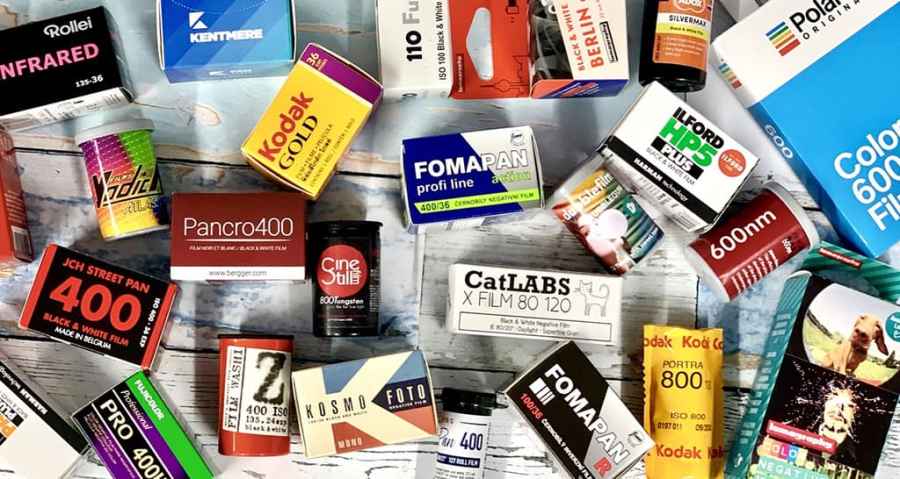 With a big film retailer such as Analogue Wonderland, how do you go about choosing the right film for your needs if you are new to analogue photography, or are coming back to it after a few years absence? Emma Lloyd from Analogue Wonderland (below) answers some common questions? 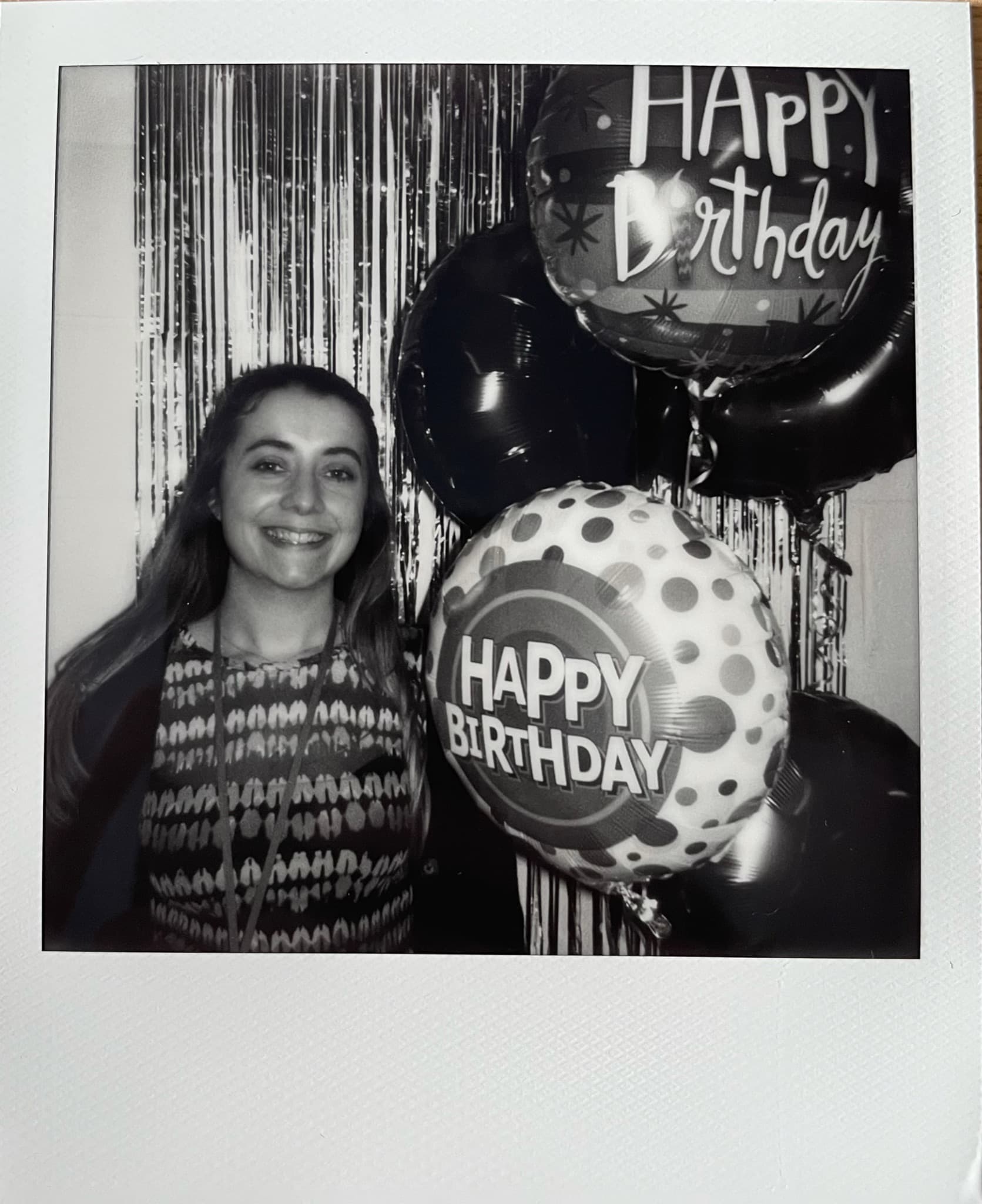 The choice of films on your site is huge – how do people go about choosing what’s right for them?
We have lots of ways to help customers navigate the range and choose the best film for their photography – many of them designed for self-exploration like our ’wall of inspiration’. Also on each product page we have customer reviews and sample photos uploaded directly by photographers in the community who have shot those films.

This gives an unbiased and honest view of our films and is particularly helpful for customers who are looking for a specific aesthetic to their film, as they can see example photos and understand how fellow shooters achieved certain results. 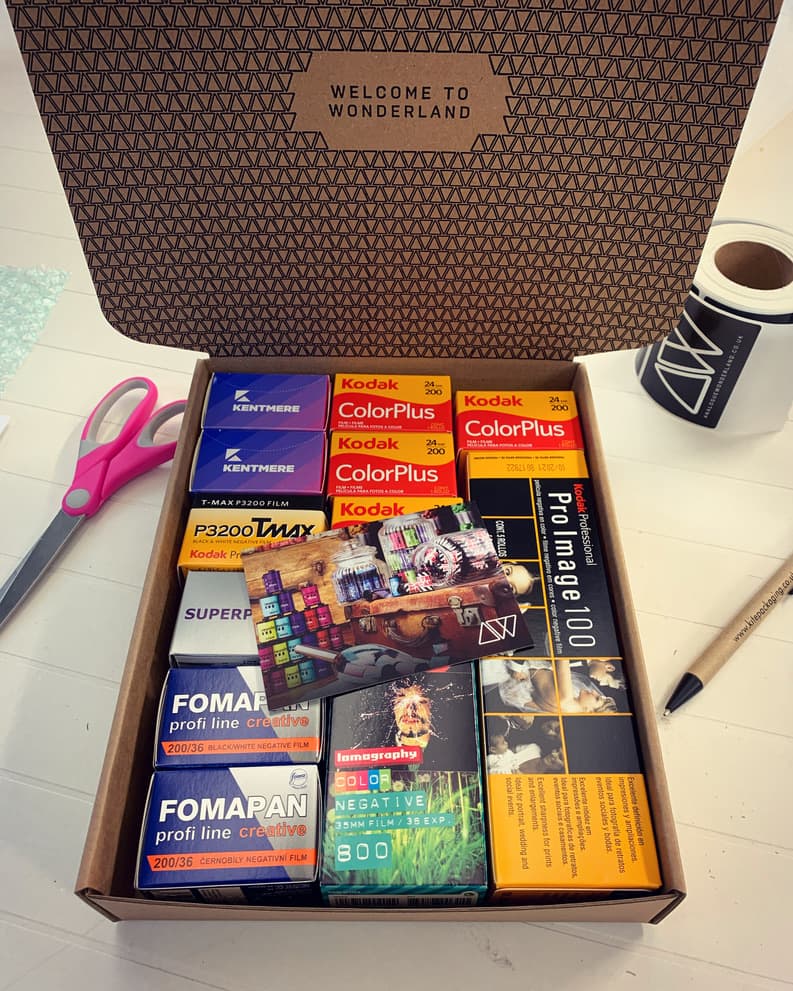 We also review films as part of our WonderBox subscription – this includes weekly youtube reviews and blog posts to provide a regular dripfeed of tips, tricks and inspiration for specific emulsions.

And if that isn’t enough to help you choose, customers can always give me a call or ping me a message on our live chat feature and I am happy to help them pick the best film for their photographic needs!

Say I wanted a particular effect – eg moody high contrast black and white landscape. Am I better off choosing a film that offers this ‘look’ or trying to get the effect more in camera, or during the developing stage?
Whilst the camera and developing stage are still important contributors to the overall look of your shots I think the impact they have is often much subtler. So I would always recommend starting with the film, especially if you are new to analogue photography and not yet familiar or confident with how different developing techniques can impact your shots.

Starting with the film might also be easier because the camera and developing process could depend on how the shooting conditions were on the day, so I would start by looking at some sample photos on our website and seeing which film fits the moody high contrast look you’re going for.

Of course when you have mastered the ‘typical’ look for certain films, you can always then continue your analogue adventures by starting to experiment with the results that different developers can provide! 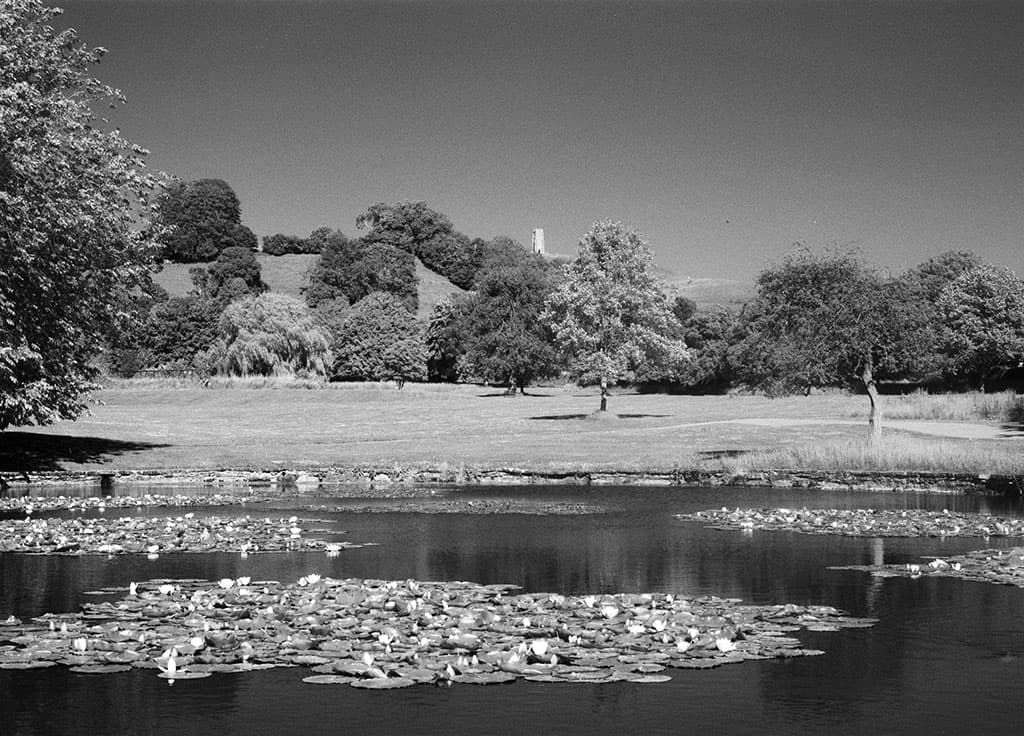 What about special effects such as infrared – how easy is it to get this look with film? Obviously digital cameras can be converted fairly easily and cheaply but it’s a different story with film…
For this reason it is actually easier in some ways to shoot infrared on film! No conversion needed, you can pick up your usual 35mm or 120 camera – load it with infrared film (like Rollei Infrared or Ilford SFX) and shoot away.

Of course to get the IR effect you will still need an IR filter for your camera lens – which can be picked up easily and affordably from reputable second-hand dealers like West Yorkshire Cameras. If you don’t use a filter you can still shoot the films – they are still sensitive to normal light – but you won’t get an infrared effect in the final image as the visible light will overwhelm the infrared.

These filters can reduce the light by up to 10 stops which can make composition difficult with SLR cameras but it’s straightforward to remove the filter, compose, and then add it back on for your light meter reading.

The other thing to remember with shooting infrared is that the focal point changes slightly. Fortunately our photographer ancestors planned for this, and many vintage lenses have a small red dot on the focus ring to show how much ‘infrared compensation’ you need to apply. 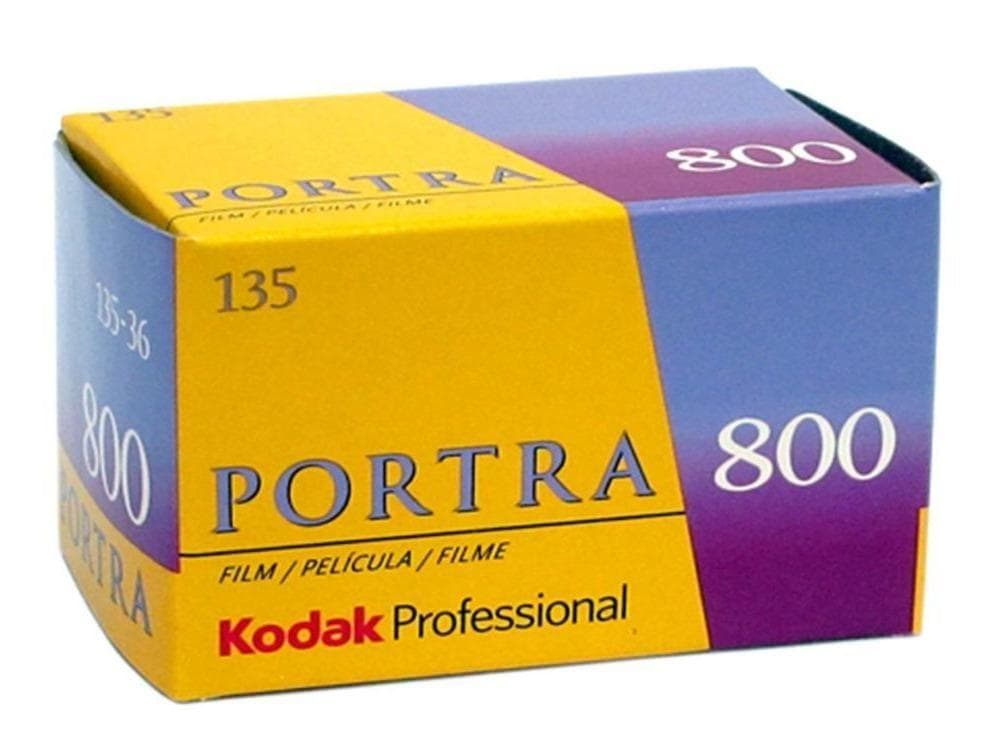 What is your best advice for people who are confused about film speed/ISO. Is it simply a case of choosing a ‘faster’ film if you tend to shoot more in low light, or does high ISO film have other benefits too?
It’s definitely the most important consideration, but there are some smart generalisations we can make about slow/fast films to predict the resulting aesthetic you can expect.

Faster films (high ISO) will tend to have more visible and larger grain. This is the trade-off that the chemists have made in order for the emulsion to capture more light, so you are unlikely to get super clean and clear images with high ISO films. This is comparable to early digital cameras that would show image degradation as you moved to any ISO above 800.

Fortunately that’s now a thing of the past for digital shooters, and it is also our belief that film grain is more aesthetically pleasing than digital noise…

This means that it’s not about fast films giving ‘bad’ images – but you should just be aware that the grain will start to feed into the final look of the photo.

Conversely slow films (low ISO) will tend to have much tighter grain, which means that you can print/scan them on a higher resolution and maintain an incredible amount of detail. 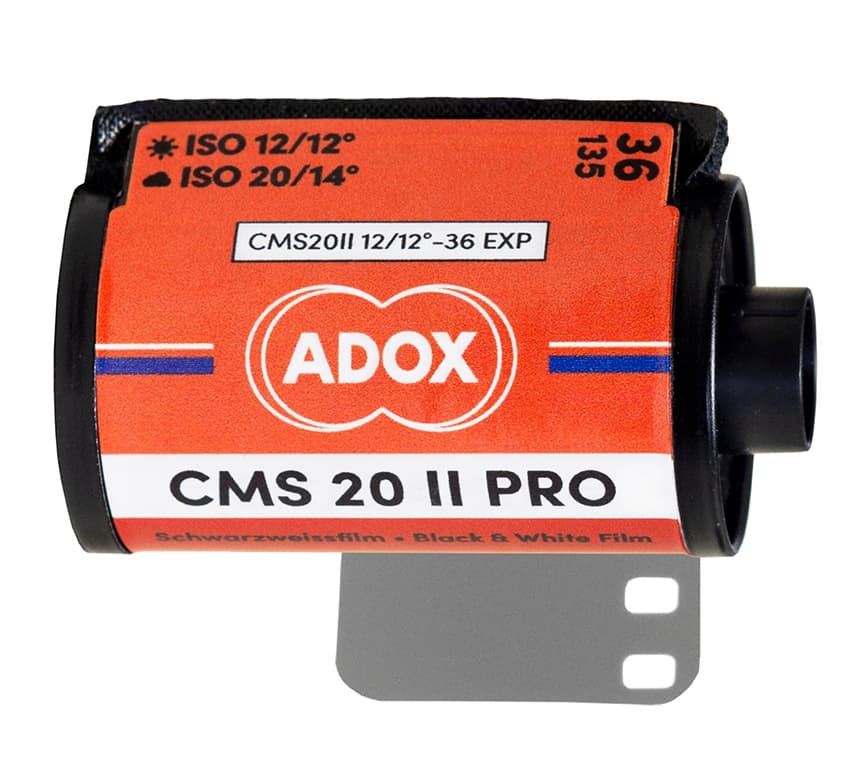 The sharpest film in our store is Adox CMS 20 – a specialist low-speed film. When developed in the matching Adox developer it produces 35mm negatives that can be enlarged to over 2.5m diagonally (roughly equivalent to 500 megapixels) without any loss of detail.

Are there any films you particularly recommend for double exposure, or will any mainstream type do?
We did a blog on double exposure recently, and spoke to a lot of photographers who experiment with this technique. The main advice was to start with black and white film because as the lack of colour simplifies the overlapping image, there is less detail and colour variation to get in the way and it will help you visualise how double exposure works.

Of course you can use colour film too. As for the best film to use, most modern emulsions have a good exposure latitude these days so you don’t need to worry as much about exposure compensation. Most mainstream films will work well.

The one exception to that is slide film – the chemistry behind positive film is much more sensitive to accurate exposure, so until you feel very confident in nailing the light levels of double exposures I would stick to colour negative or B&W. 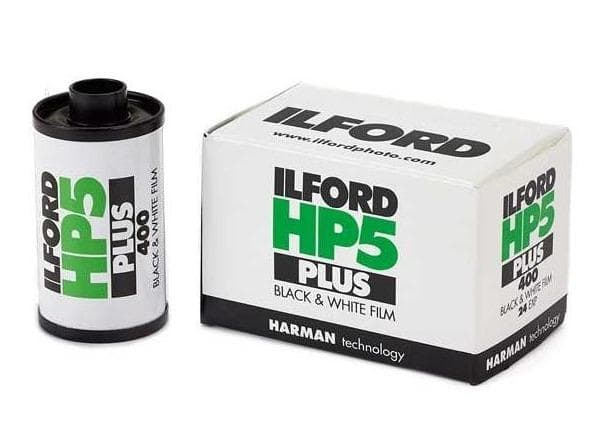 Is there any film you particularly recommend for pushing and pulling (pushing film involves setting a higher ISO rating, often to increase contrast and grain during development, and pulling is the opposite)
One of the community’s favourite films to push/pull is Ilford HP5 Plus. It is designed to have a speed of 400 ISO, but is regularly shot by film photographers at any speed from ISO 50 to ISO 3200!

This makes it one of the most popular black and white films in our store – and indeed across the world – as it means you can take it with you to nearly any situation, knowing that you will be able to get usable negatives regardless of the lighting.

With colour film you will want to use the more premium films, as they have better emulsion technology to allow them to cope with less/more light. So Portra 400 is probably a good bet. However there are other Portra options available in different speeds (160 and 800) so the need to push/pull is less important than picking the right speed to load in the first place! 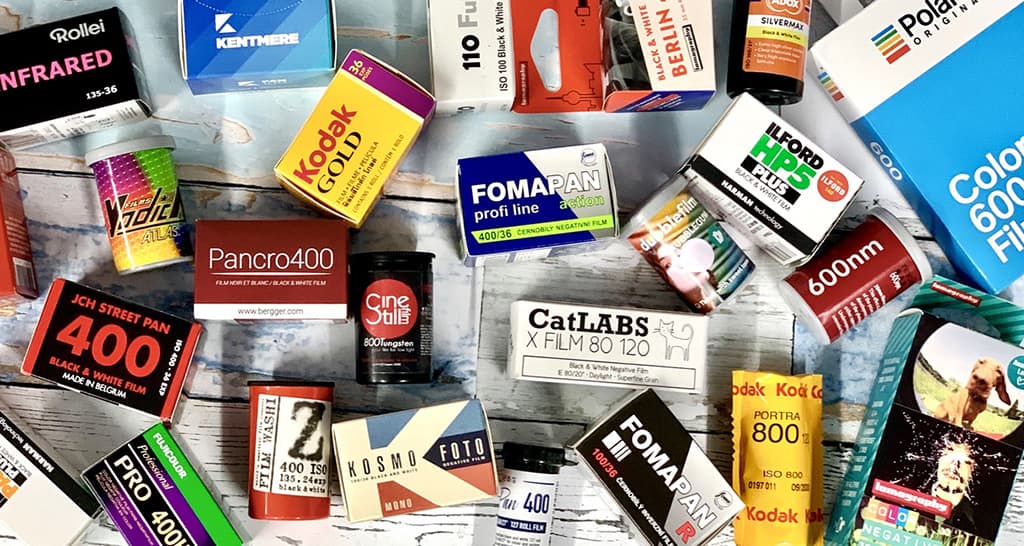 Do you personally try out all new film you stock… is there any risk in buying ’boutique’ film from a less well known brand?
All the films we stock go through a rigorous quality control process before they go on the market or online at Analogue Wonderland, so there is little risk in absolute terms. With many boutique films, especially the creative ones like revolog or Yodica, there is an element of unpredictability from frame to frame – but this is integral to their design and a reason to shoot with them instead of the ‘classic’ brands.

We have great relationships with the smaller boutique brands we stock, we love supporting them and their genius (mad) ideas.

It’s also worth saying that whenever there is a problem – which is rare – we will always care for our customers by giving a refund, and on occasion we have given discounts on films we know to have been affected by certain issues. For example we had a film where the sprockets had been exposed during production, and we made sure that folks knew this had happened and the price reflected the mistake.

Fortunately the film community will happily embrace quirks as a creative opportunity, so there was still a lot of demand for it from our customers!

So whilst there isn’t strictly a need for us to test all the new films we stock… we are all film enthusiasts so we will happily volunteer! Our staff are always quick to grab new films that launch in our store, so we effectively have an in-house Analogue Wonderland quality control team too. We get immediate feedback from them with a lot of our newer boutique films – a massive perk of working here.