Whatever type of film camera you favour, there’s a 35mm version out there somewhere. John Wade talks you through the main options when looking for the best 35mm film cameras.

Has there ever been a more versatile film than 35mm film? Available as black & white negative, colour negative or colour reversal (slides and transparencies), just about every shape, style and type of camera has at some time been made for 35mm. They range from single lens reflexes (SLRs) to twin lens reflexes (TLRs), from half-frame to panoramic, and much more in between. And the film is still easily available.

This makes all these different kinds of cameras still very usable for today’s film fans.

What are the 9 different types of 35mm film camera? 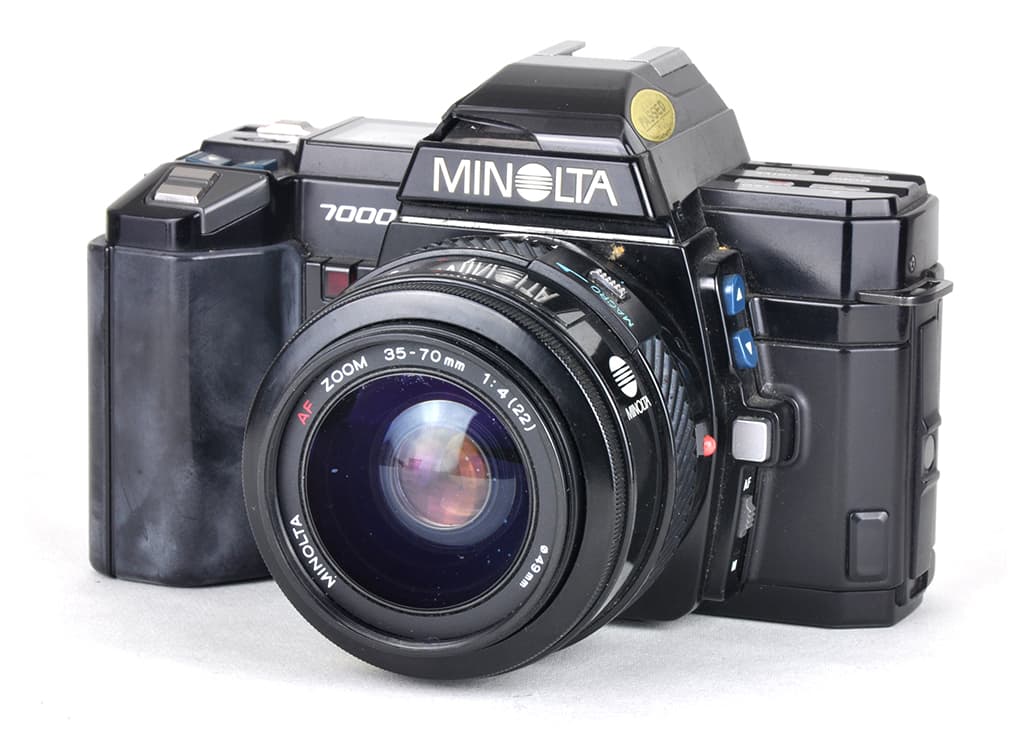 Minolta 7000, first of the body-integral autofocus SLRs and still a well specified camera today for a budget price

Early body-integral autofocus cameras like the Minolta 7000 and 5000, or the Canon EOS 650 from the 1980s can be picked up today for very little money. They’re still usable, but you might find the now ancient technology a little creaky. For the full 35mm autofocus SLR experience, head to the late 1990s and early 2000s, a time when film camera technology reached a peak, prior to the start of the digital revolution.

Here you’ll find cameras like the Nikon F100 with all the usual exposure modes, 22 custom settings, ten-segment 3D matrix metering, autofocus that keeps up with shooting at 4.5 frames per second and a top shutter speed of 1/8000sec. Or how about the Canon EOS 3 with Eye Controlled Focus; 21-zone evaluative, centre-weighted average, partial, spot and multiple spot metering; plus a 1/200sec flash synch speed?

Also worth a look from this era are the Minolta Dynax 7 and Pentax MZ-5N.

The first manual focus 35mm SLR was the Kine Exakta in 1936. It’s a nice collector’s item, but for more usability, the 1970s was the golden age. Here you’ll find the iconic Olympus OM-1, the first truly compact 35mm SLR, with match-needle metering and fully mechanical operation.

Three stars from the 1970s: left to right: Olympus OM-1, Pentax ME Super and Canon AE-1

Or maybe the shutter-priority Canon AE-1 with its central processing unit (CPU) to handle metering, exposure, memory, warning signals and safety mechanisms. Consider also the Pentax ME Super with its unusual press-button electronic controls in place of traditional knobs and dials.

Go forward to 1983, and you’ll find the Nikon FA, the world’s first camera with automatic multi-pattern (AMP) metering. Or, if you want to combine usability with truly classic design, what better than a Nikon F with its photomic metering head?

Some Nikon Fs might date back to 1959, but they were built to last and are seemingly indestructible.

Nikon classics from two eras: The Nikon F with photomic metering head (left) and the much later Nikon FA

In the days before 35mm SLRs ruled the photographic world, 35mm coupled rangefinder cameras were all the rage. Most that are still around today date to pre-1960. Top of the tree is just about anything made by Leica. Consider the IIIf, one of the last screw-lens cameras that is more reasonably priced than the IIIg which was the very last; or the M3, first of Leica’s bayonet lens cameras, still optically and mechanically superb.

The same goes for the post-war Zeiss Ikon Contax IIa and IIIa cameras. (The similarly named Contax II and III are pre-war and not of the same build quality.) At the other end of the price spectrum it’s worth checking out Braun Paxette and Super Paxette cameras. 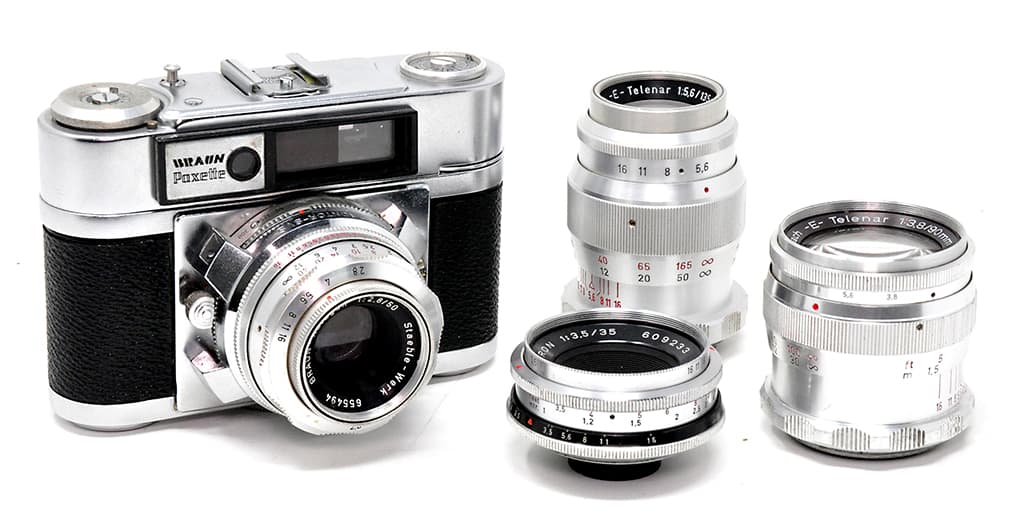 There are many variants with similar names, some with interchangeable lenses that include standard, wideangle and telephoto. And don’t forget the Russian FED and Zorki rip-offs of Leica cameras, or the Kiev Contax copies.

Although most TLRs were made for 120 roll film, a few were made for 35mm. The best was undoubtedly the Contaflex, made by Zeiss Ikon in 1935. It is, however, a serious collector’s item and somewhat pricey. Moving down the price scale and forward in years, pausing briefly at cameras like the Toyocaflex and Samocaflex, you’ll come to the much more reasonably priced Agfa Flexilette, Bolsey C2 and C22 from the 1950s and 1960s.

Each takes the form of a simple 35mm compact-type camera with the addition of an extra lens above the taking lens to reflect its image up to a hooded focusing screen on top of the camera.

While the majority of 35mm cameras use the traditional 24x36mm format to shoot a maximum of 36 exposures to a roll, there are those that cut that in half to produce 72 pictures, each one 18x24mm. Although taken up for a while by the likes of the Yashica Samurai or the Canon Demi, the most notable are the Olympus Pen cameras, simple viewfinder models with various forms of metering. 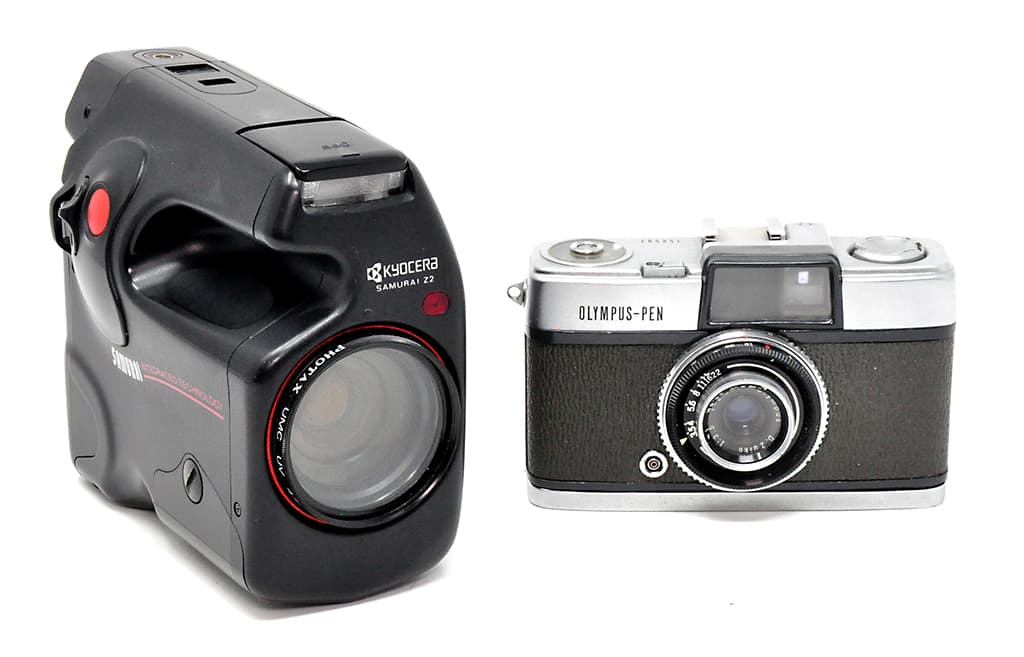 The best two models are the Olympus Pen F and Pen FT, from 1963 and 1966 respectively, the first unmetered and the second with the addition of a CdS meter. Both are true SLRs which use unconventional sideways-moving reflex mirrors that allow sleek outlines with no sign of the pentaprism humps found in most 35mm SLRs.

Each camera stands at the centre of an interchangeable lens range from 20mm wideangle to 800mm catadioptric telephoto, and the kind of accessories normally associated with full-frame 35mm SLRs. 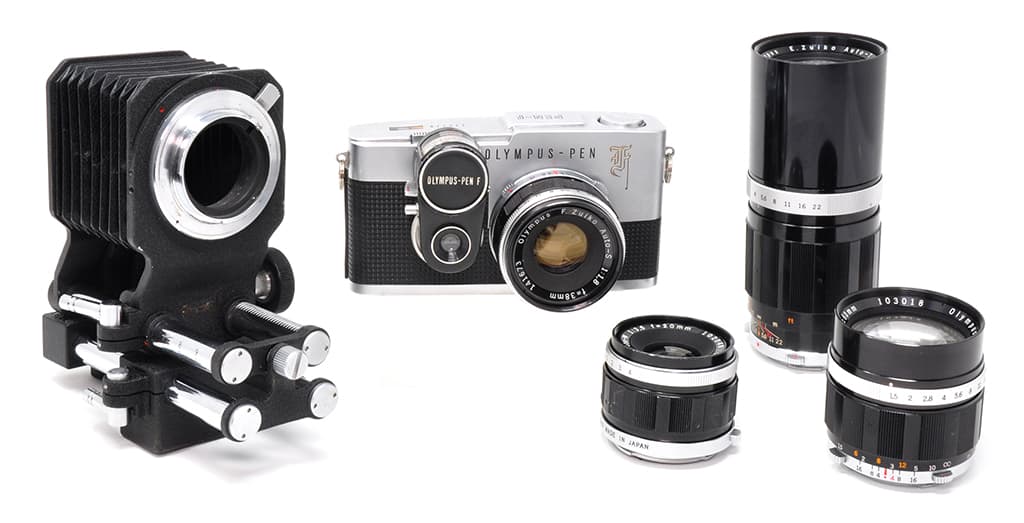 The last three decades of the 20th century saw the rise of the 35mm compact, and today there are hundreds, if not thousands, to choose from. Starting as simple point-and-shoot cameras, compacts gradually encompassed auto exposure, autofocus and zoom lenses. Two non-typical styles from Olympus are worth seeking out.

The Olympus XA is small enough to fit into the palm of the hand, yet incorporates a coincident-image rangefinder and still takes full frame 35mm pictures. It features aperture priority and a Zuiko 35mm f/2.8 lens hidden behind a sliding panel on the front.

The XA line of cameras continued with the XA 1, XA 2, XA 3 and XA 4, made in various colours with fixed focus or zone focusing. The Olympus mju, a natural successor to the XA, arrived in 1997 with a new, sleeker design, adding autofocus as standard and a built-in motor drive.

The range includes the mju II with a waterproof finish, panoramic models and a very stylish, limited edition silver version of the mju-III Zoom 80. 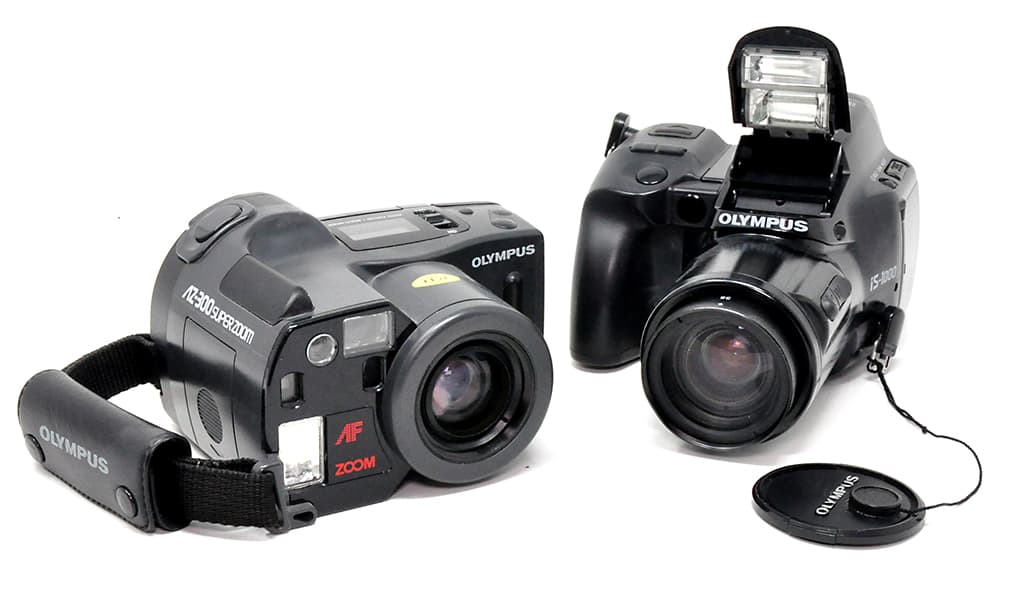 Enjoying a certain amount of popularity in the late 1980s and early 1990s, these were the result of manufacturers making cameras that exhibited SLR versatility coupled to compact camera simplicity of use. Exemplified by cameras like the Olympus AZ-300, bridge cameras are well specified as far as metering, built-in flash and zoom lenses are concerned.

Exposure, however, is likely to be program mode only and lenses are not interchangeable. Olympus also made the unusual IS-1000 SLR with an integrated zoom lens, along with a series of follow-up models. 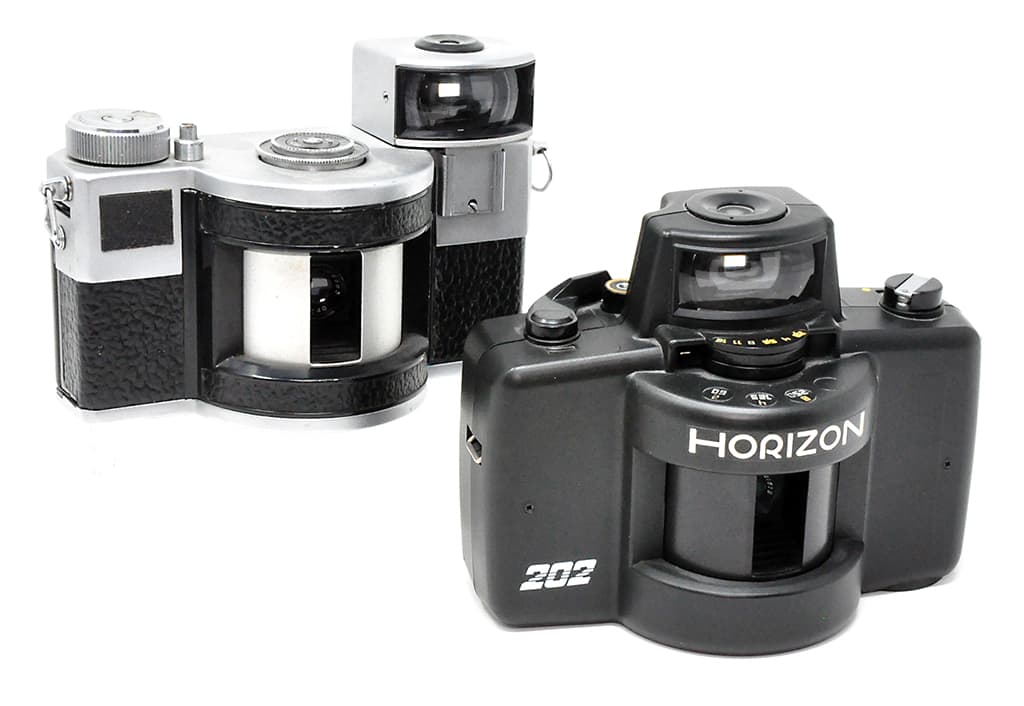 Here’s a 35mm format for the real enthusiast: a group of more specialised cameras that uses a swing-lens mechanism to build up an extra-wide picture on standard 35mm film. Models range from the expensive Noblex 135 from 1992, which produces 24x66mm images, down to the more reasonably priced 1967-vintage Horizont and the still available Horizon 202, both of which produce 24x58mm images. 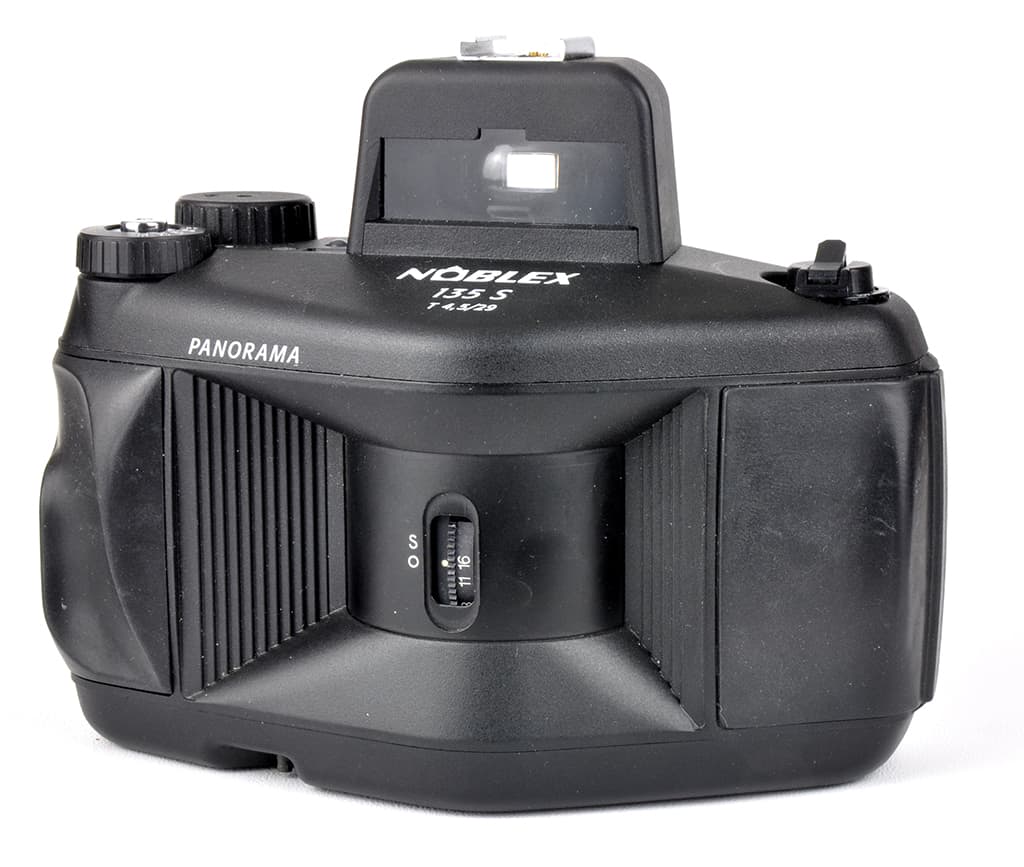 What to pay for film cameras

In partnership with Analogue Wonderland

Ready with your camera? Now dive into Analogue Wonderland with over 200 films, home developing kits, accessories and more – all available for immediate dispatch. Enjoy fast, tracked shipping from an independent UK retailer with a huge passion for film. For an exclusive offer, simply visit us at: www.analoguewonderland.co.uk/pages/ap

Find more film photography content in our dedicated film section, and check out our list of the best disposable film cameras.