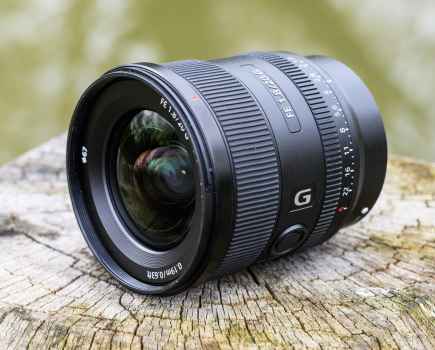 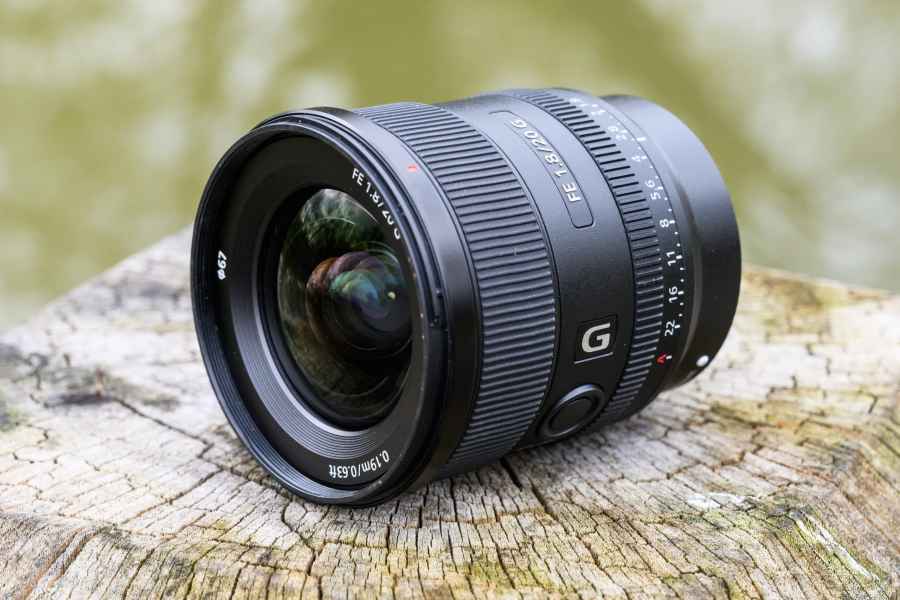 In the space of seven years, since the arrival of the first A7-series cameras, Sony has established a healthy range of full-frame lenses for its mirrorless system. There are many exemplary examples among the 31 full-frame E-mount lenses Sony currently offer and in recent years we’ve witnessed the manufacturer increase the number of telephoto lenses for the serious enthusiast and working professional.

Having delivered many long focal length lenses of late, Sony has started to look at other areas of its lineup where lenses are missing. The number of fast wide-angle primes is one such area where there’s been a shortage. As sensational as Sony’s FE 24mm F1.4 G Master (£1,295) is it’s on the expensive side and doesn’t provide the wide field of view many photographers specialising in architectural, landscape and astro photography are after. 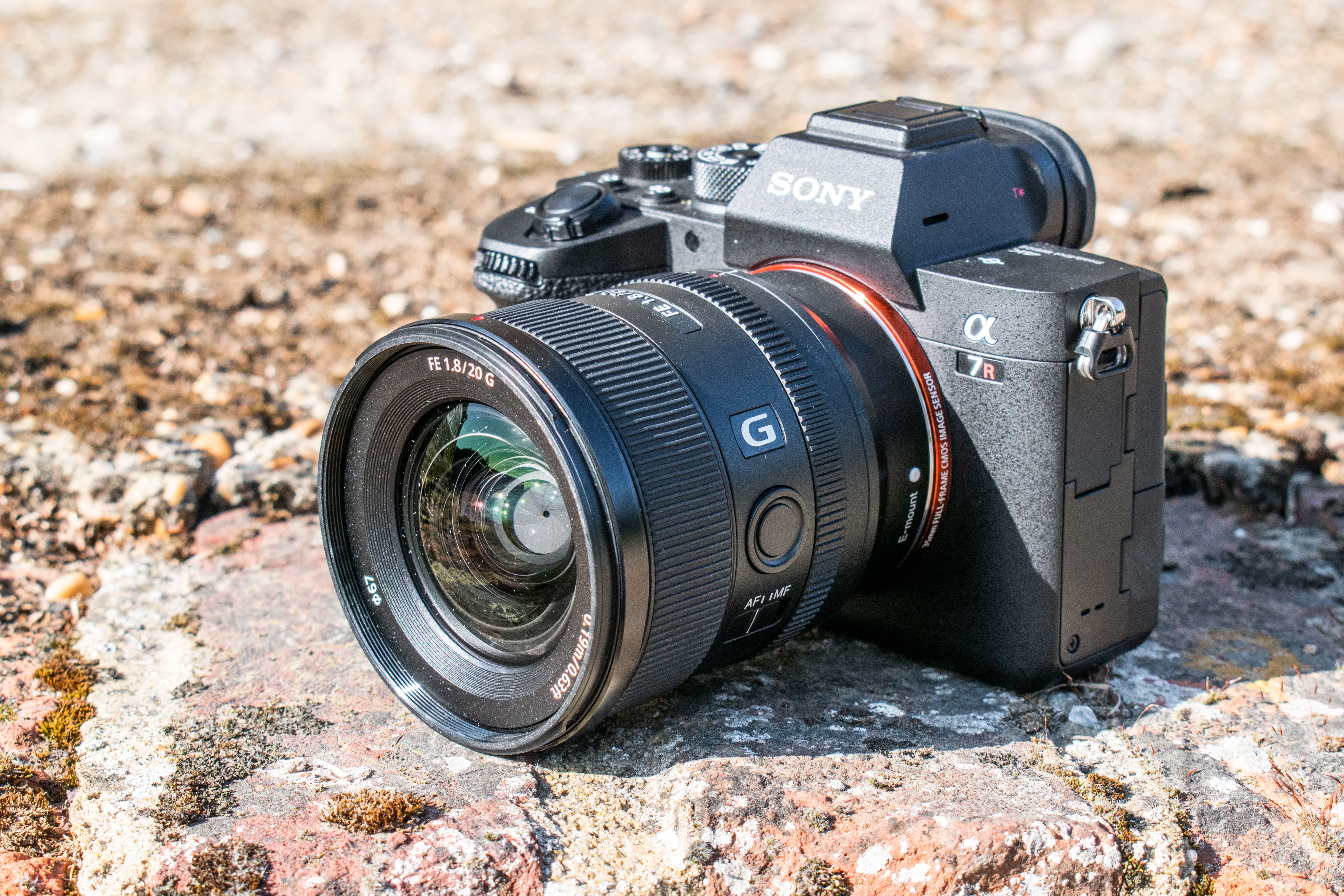 The Sony FE 20mm F1.8G was tested with the Sony A7R IV for the purpose of this review

After acknowledging it was about time they produced a fast wide-angle prime of their own, Sony set about making the FE 20mm F1.8 G. Designed to be a compact lens promising excellent edge-to-edge sharpness and reliability for a wide variety of shooting requirements, it fills a missing gap in Sony’s lens lineup and becomes the widest and fastest fixed focal length E-mount lens from the manufacturer to date.

Although the FE 20mm F1.8G sports the letter ‘G’ on its barrel, it should be noted that we’re not looking at a Sony G Master lens. Those familiar with Sony’s top-of-the-line G Master lenses, which have a reputation for their optical excellence and exceedingly high prices, will know how to spot them apart from their G-series counterparts. The clue is the red background to the letter ‘G’ on the barrel, which differs to the G-series lens we’re looking at, which has a black background. 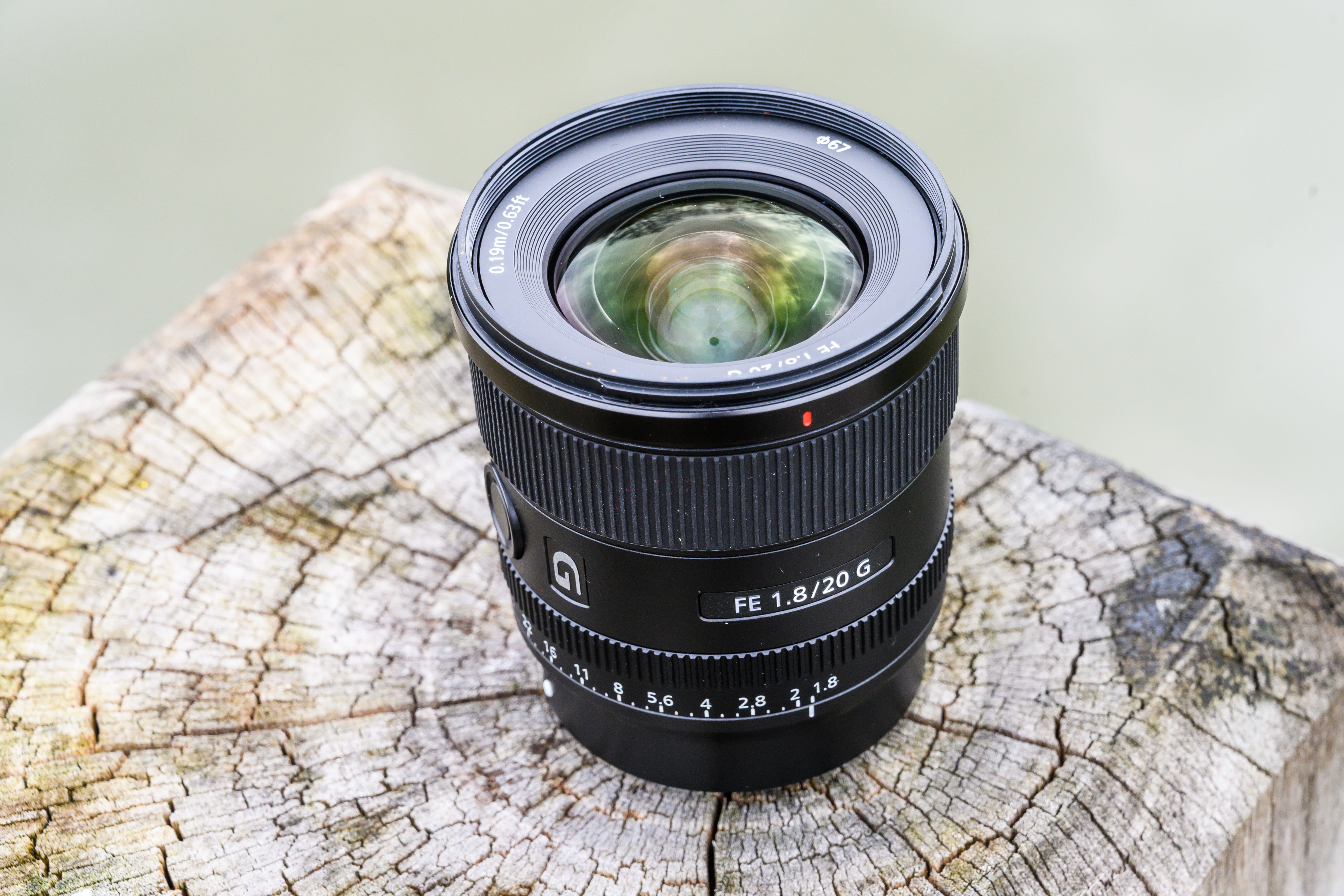 The FE 20mm F1.8G accepts filters and adapters via a 67mm filter thread at the front

Subtle differences in branding aside, the lens features a complex optical design that’s made up of 14 elements in 12 groups. This arrangement includes two advanced aspherical (AA) lens elements to provide high-performance from corner-to-corner at wide apertures and help mitigate sagittal flare – a common phenomenon with fast wide-angle lenses where points of light, such as stars in the night sky, appear as if they’re spreading at the periphery of the frame. 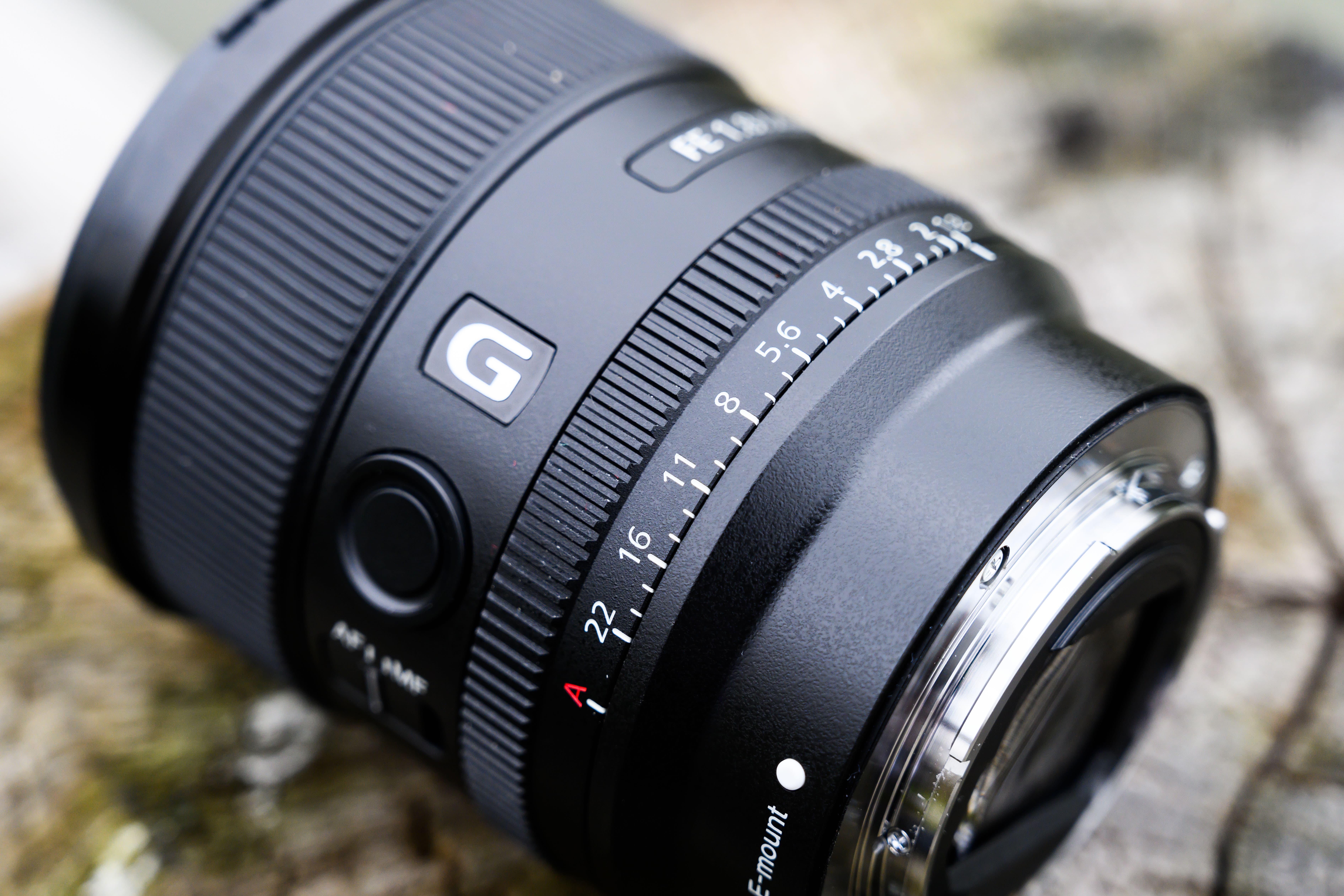 To counteract the affects of chromatic aberration the lens also employs three extra-low dispersion glass elements, two of which are located towards the centre of the optical configuration, with the other positioned behind the front element. Not forgetting the importance of ensuring out of focus points of light are rendered smooth and circular, the lens also benefits from nine rounded aperture blades. These are clearly obvious when you remove the lens and inspect it from the rear. 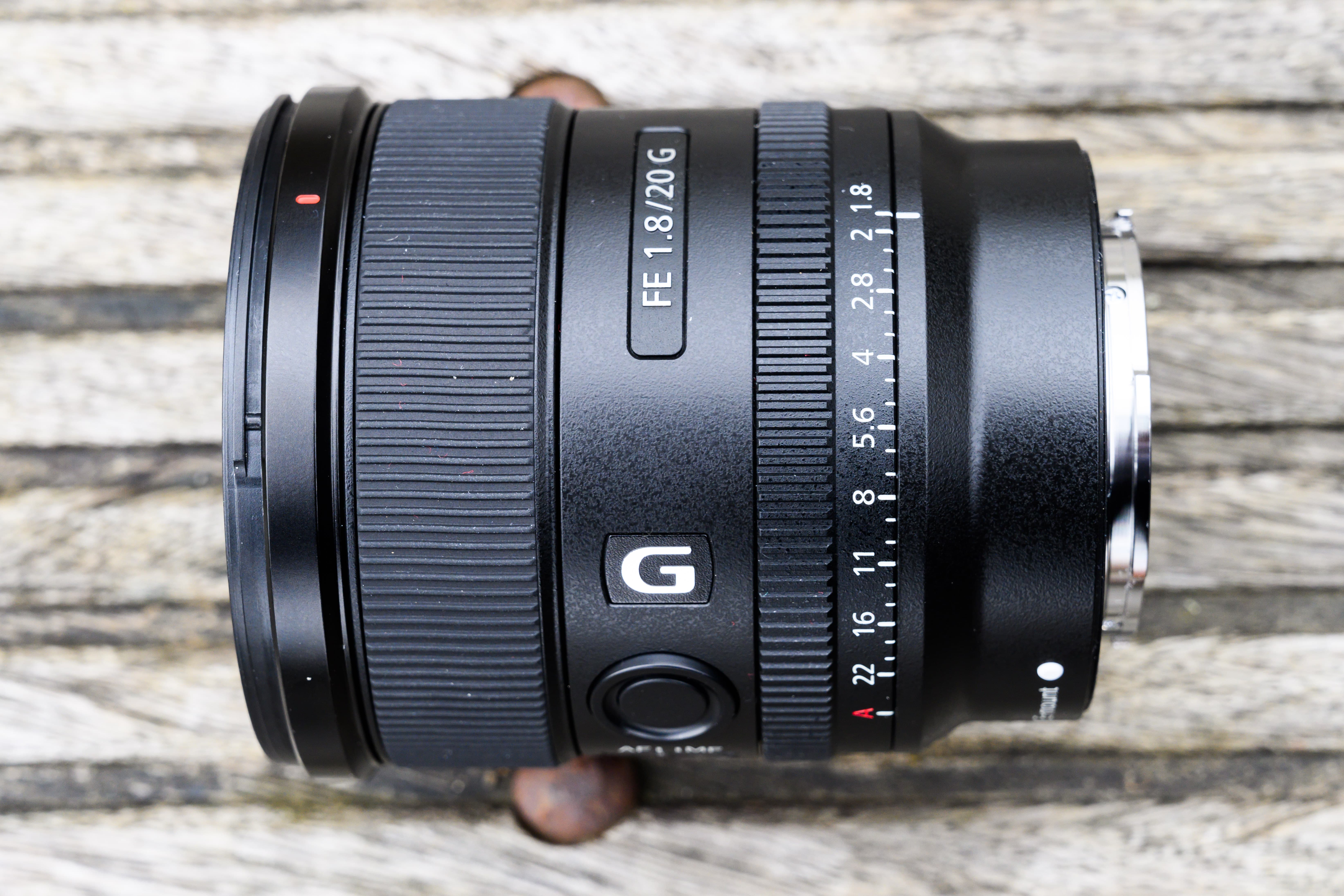 To maximise the speed of autofocus and make sure it’s well matched with the high-speed capabilities of Sony’s latest A7-series cameras, the lens is equipped with two extreme dynamic (XD) linear motors. These are developed to deliver high thrust and efficiency, working in tandem with new control algorithms to drive the lens’s large focus group in a smooth and silent manner. In AF mode users can exploit the lens’s 19cm minimum focus distance, which reduces to 18cm if you switch to focusing manually. 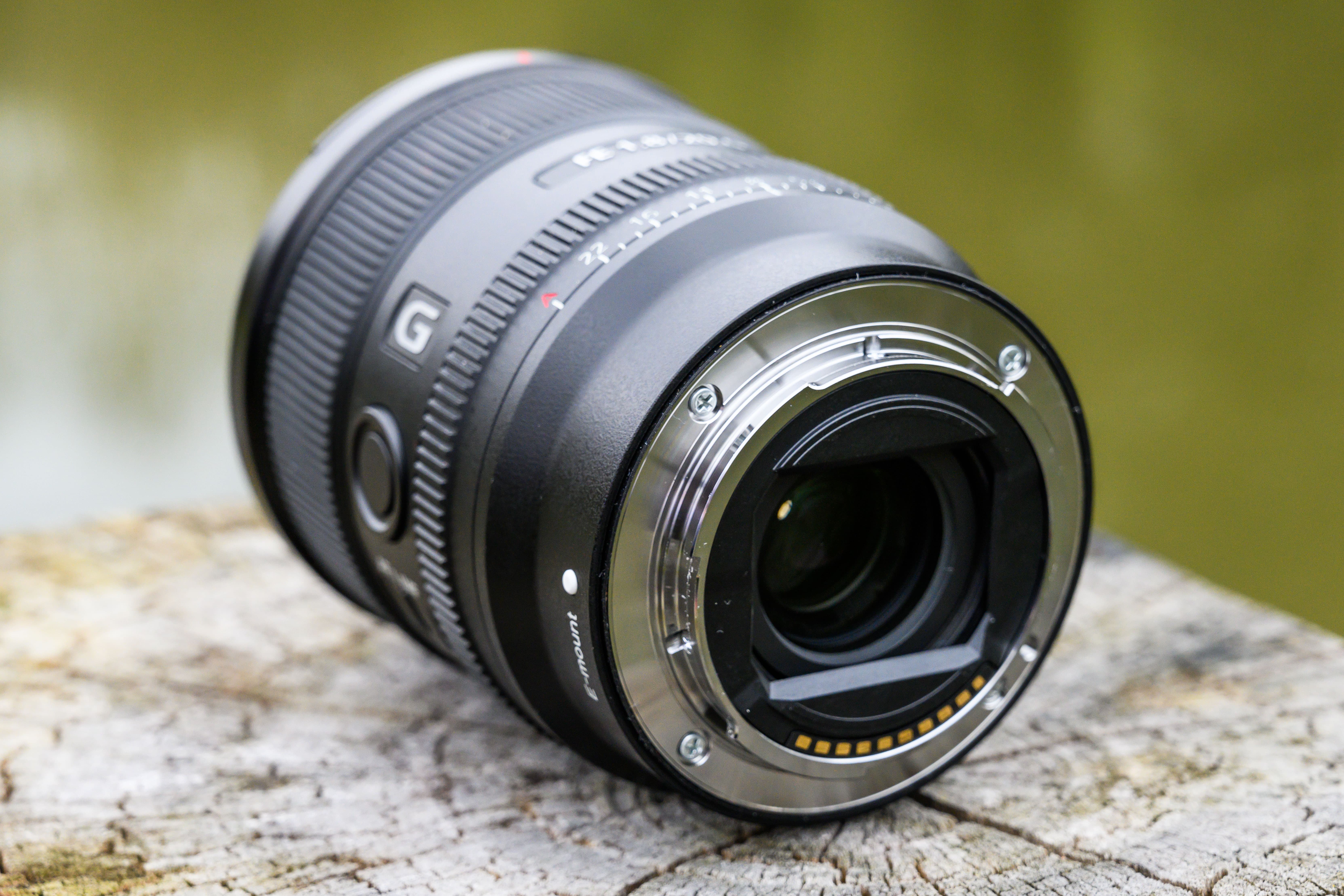 To help suppress reflections that can cause flare and ghosting the lens benefits from Sony’s original Nano AR coating. The front element also gains a fluorine coating that repels water and makes it easy to wipe off fingerprints or other greasy or oily contaminants.

Thanks to its internal focusing, the 67mm filter thread at the front of the lens doesn’t rotate. This is good news for users of polarising filters who don’t want to be forever readjusting their filter between shots. A plastic petal-shaped, bayonet hood is also supplied in the box along with front and rear caps and a soft lens case. 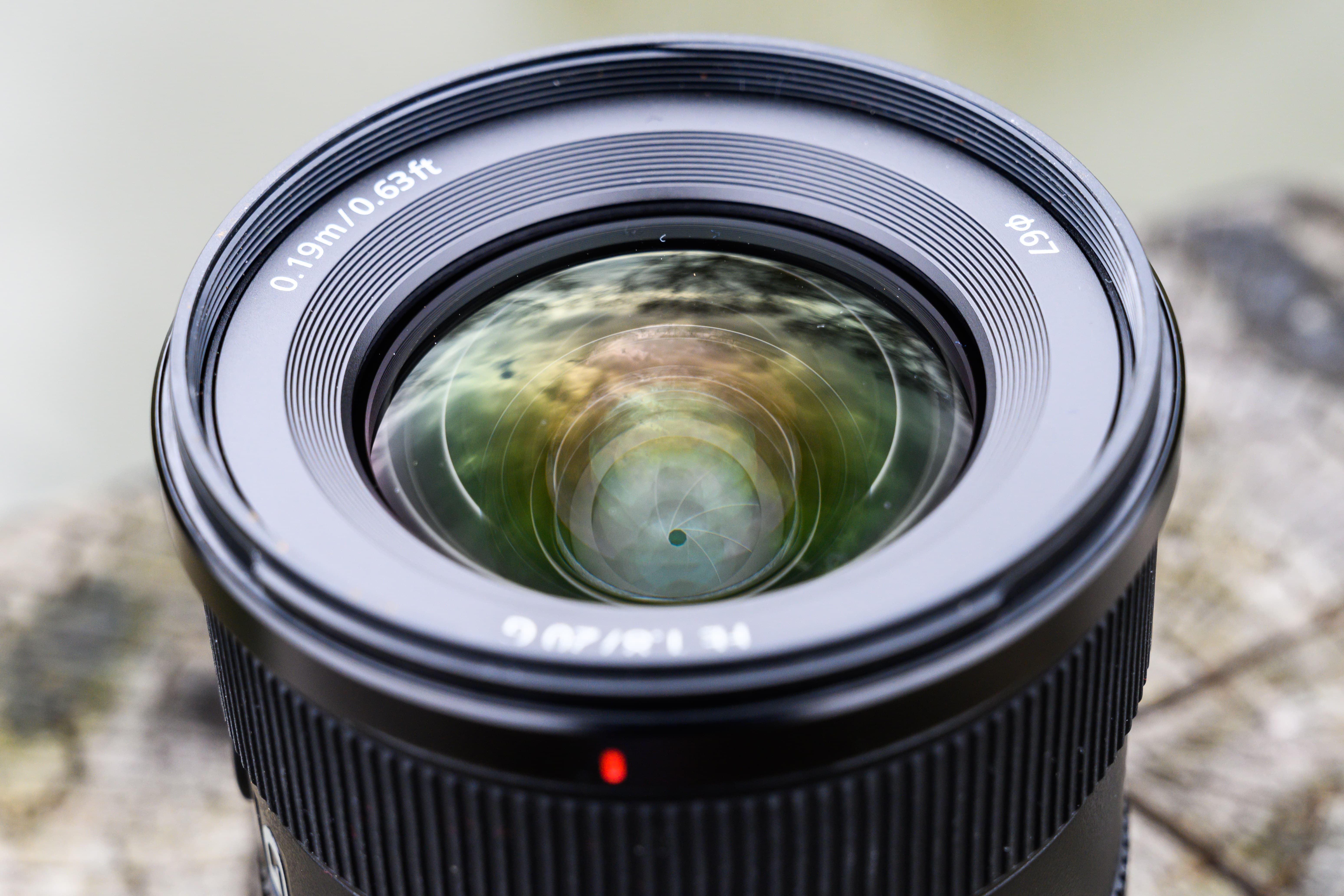 The minimum focus distance (0.19m) is printed at the front of the lens. Users will find they’re able to focus fractionally closer (0.18m) when focusing manually

While the lens is most likely to see use with Sony’s A7-series full-frame mirrorless cameras, there’s nothing to prevent owners of Sony’s APS-C E-mount cameras using it. Paired with cameras such as the Sony A6100 or A6600, it becomes equivalent to a 30mm f/1.8 lens.

Compared to the Sigma 20mm F1.4 DG HSM, the FE 20mm F1.8G is more compact and balances brilliantly with A7-series bodies like the A7R IV, which has a new and improved handgrip over older A7-series models. 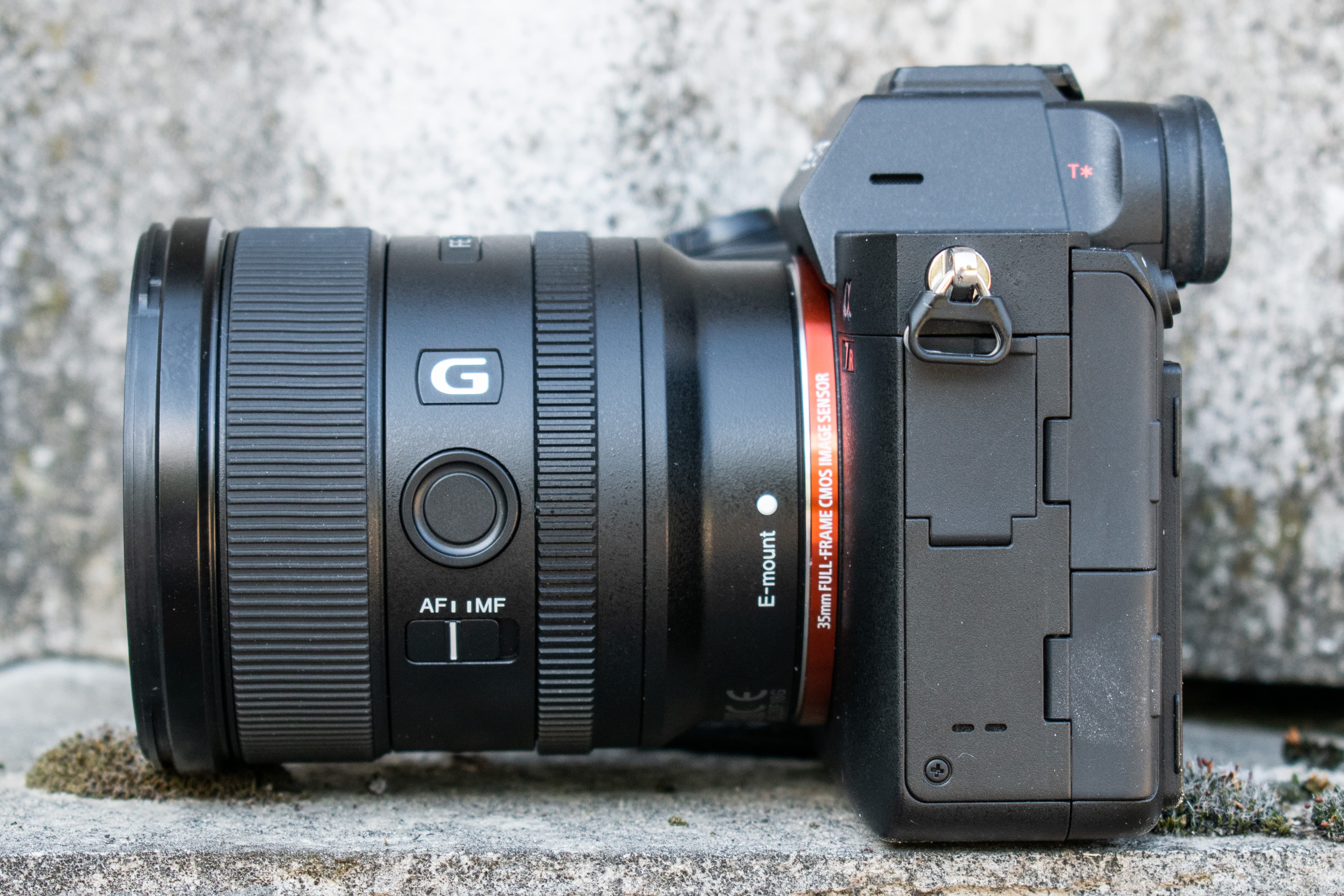 There’s no hint of the lens making the camera feel nose heavy like there is with some big wide-angle zooms and you get a superbly designed aperture ring that gives you the choice of it notching into position at 1/3EV intervals, with the option of engaging a ‘click off’ setting that turns it into continuously smooth aperture ring for silent aperture control during movie recording. At the far end of the aperture scale the lens can be set to an ‘A’ setting. This hands aperture control back to the camera’s front dial if you prefer to work in this way. 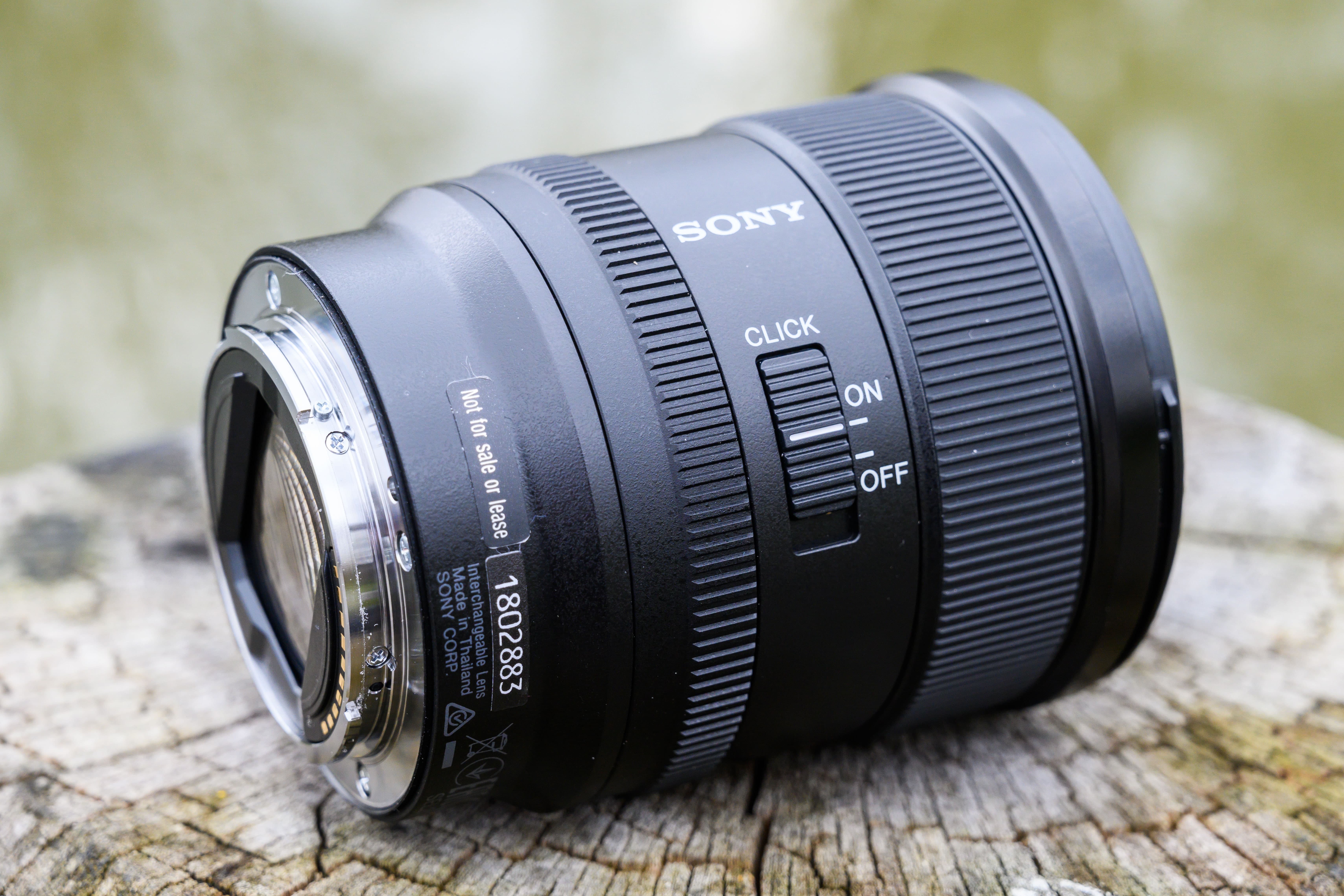 The aperture ring can be set to either click as it’s rotated or operate smoothly via this switch.

Just above the AF/MF switch, Sony has added a focus hold button. Enter the Custom Key settings from the camera’s menu and you can reassign it to a variety of different settings. Something I did observe about this button is that it does click fairly loudly and isn’t as quiet to use as many of the buttons on the A7R IV’s body. 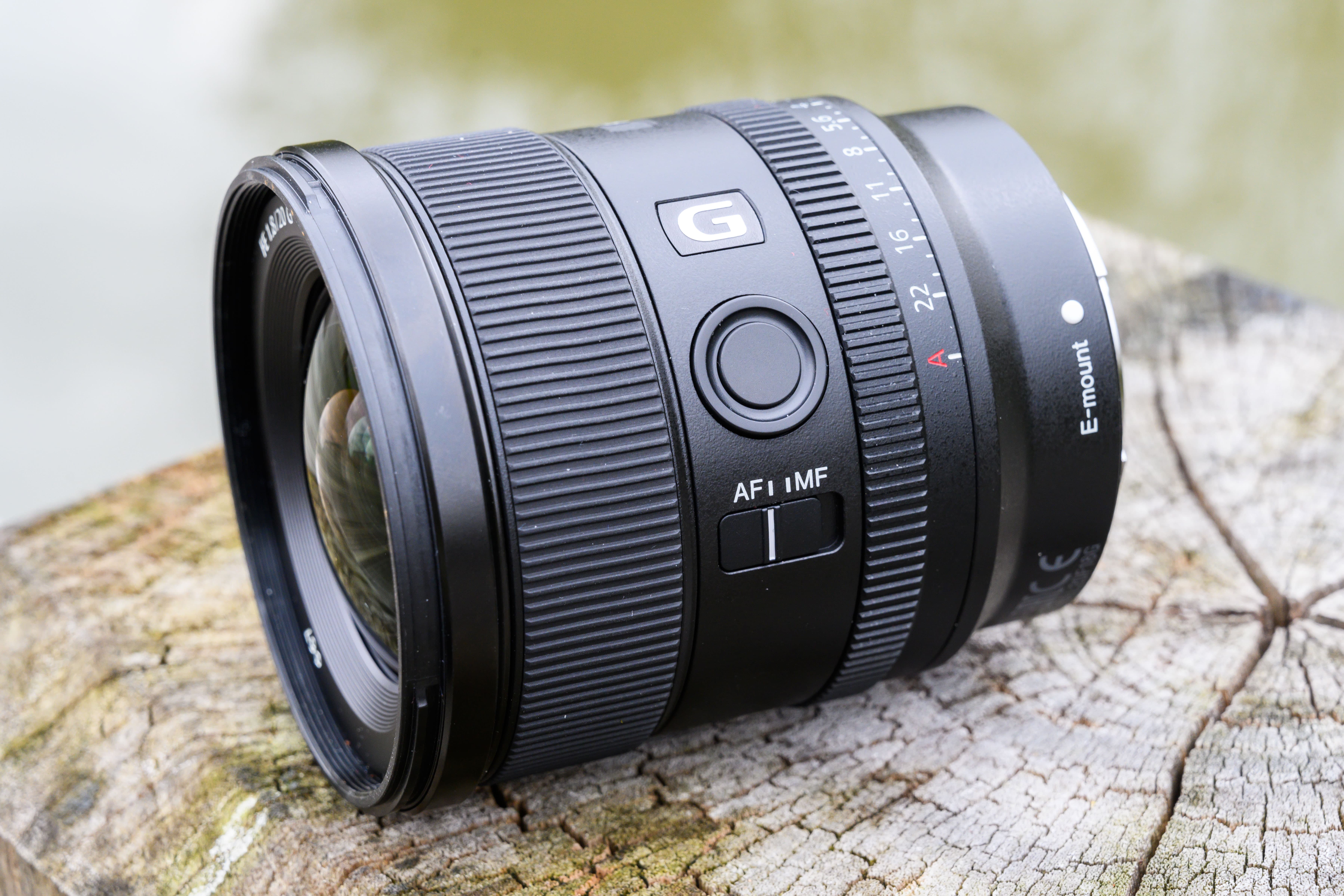 The manual focus ring is rubberised, which helps differentiate the feel between it and the thinner aperture ring from behind the camera. It’s as smooth as manual focus rings get and its linear response provides incredibly precise control of the highest order. Although not guaranteed to be 100% dust and moisture proof, the lens does include seals at strategic points in its construction to ensure reliable operation in demanding conditions.

The image quality performance is best described as sublime. Using it with Sony’s 61-million-pixel A7R IV gave it as stiff as test as any and even when it was coupled to this powerhouse of a camera it delivered exceedingly impressive results through its aperture range. 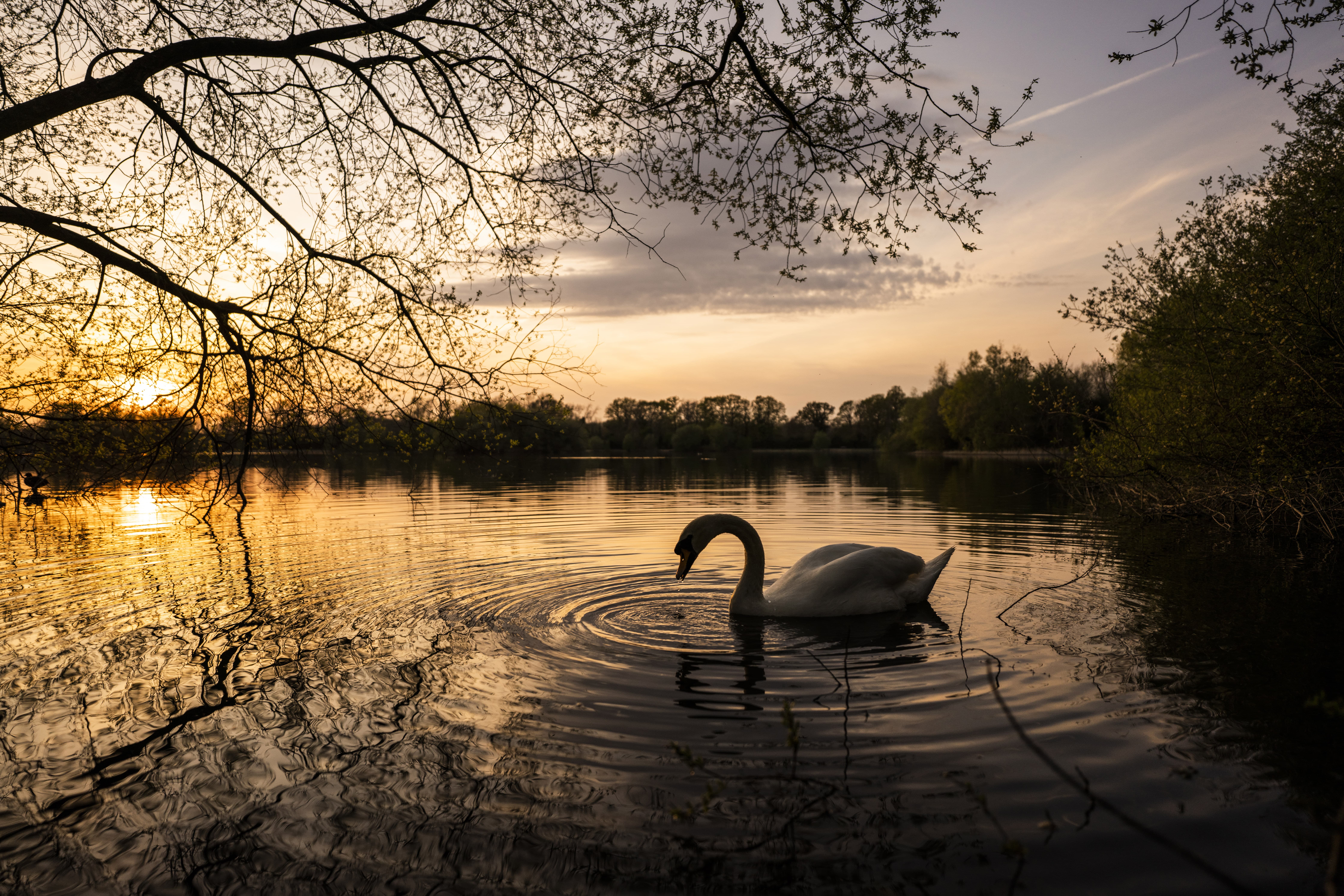 The lens resolves highly respectable sharpness in the centre of the frame wide-open at f/1.8, with corners being only marginally softer. This is great news for astronomy, nightscape and wedding photographers who are likely to use the lens close to its maximum aperture in complete darkness or in very testing environments. Stopping down to f/2.8 sees centre and corner sharpen up more with a gradual increase in sharpness across the frame to its so-called ‘sweet spot’ in the aperture range, which I identified just beyond f/5.6. 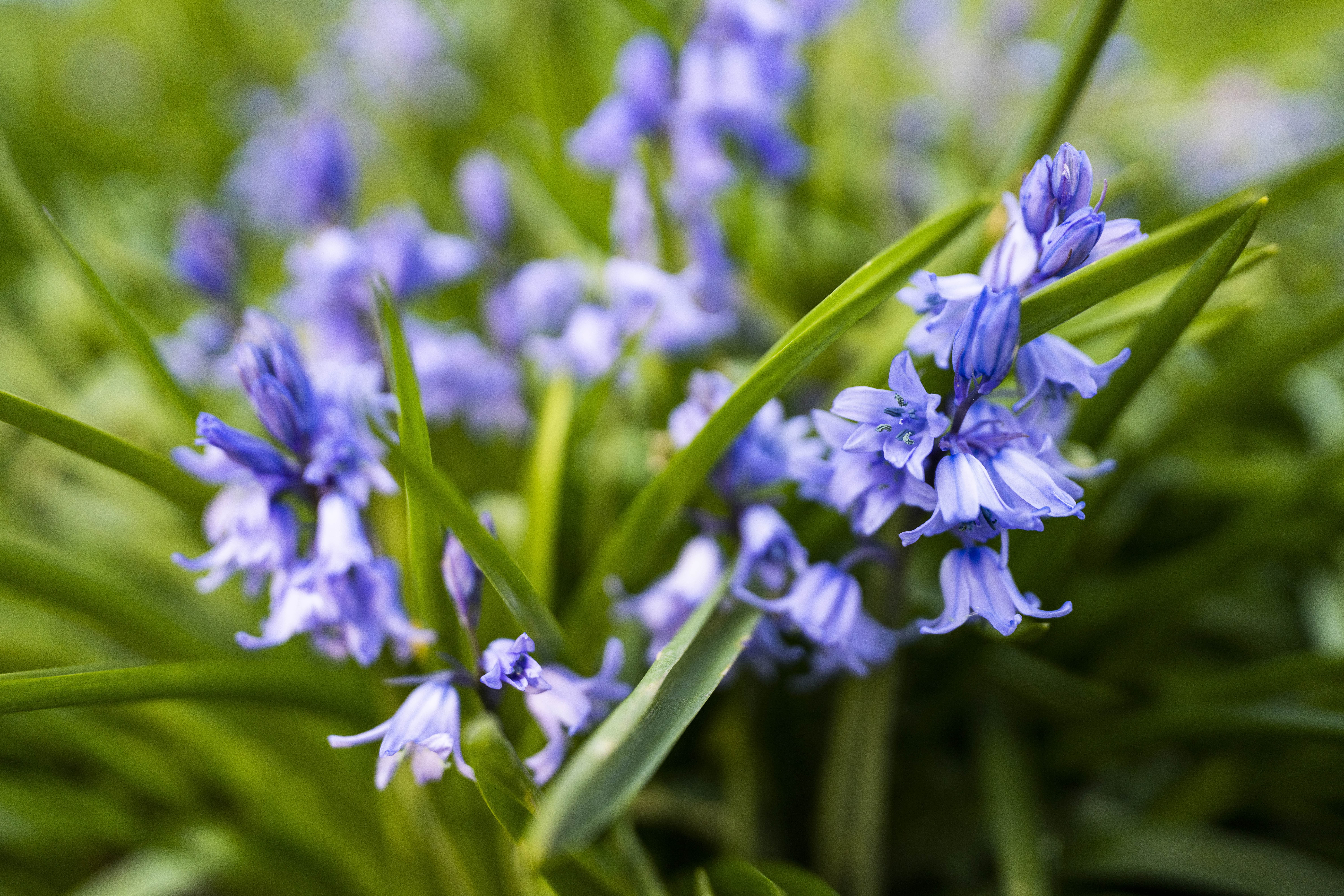 The introduction of diffraction softening fine detail was observed when aperture settings of f/16 and f/22 were used, so it’s best to avoid these apertures if you want to be rewarded with the sharpest images. 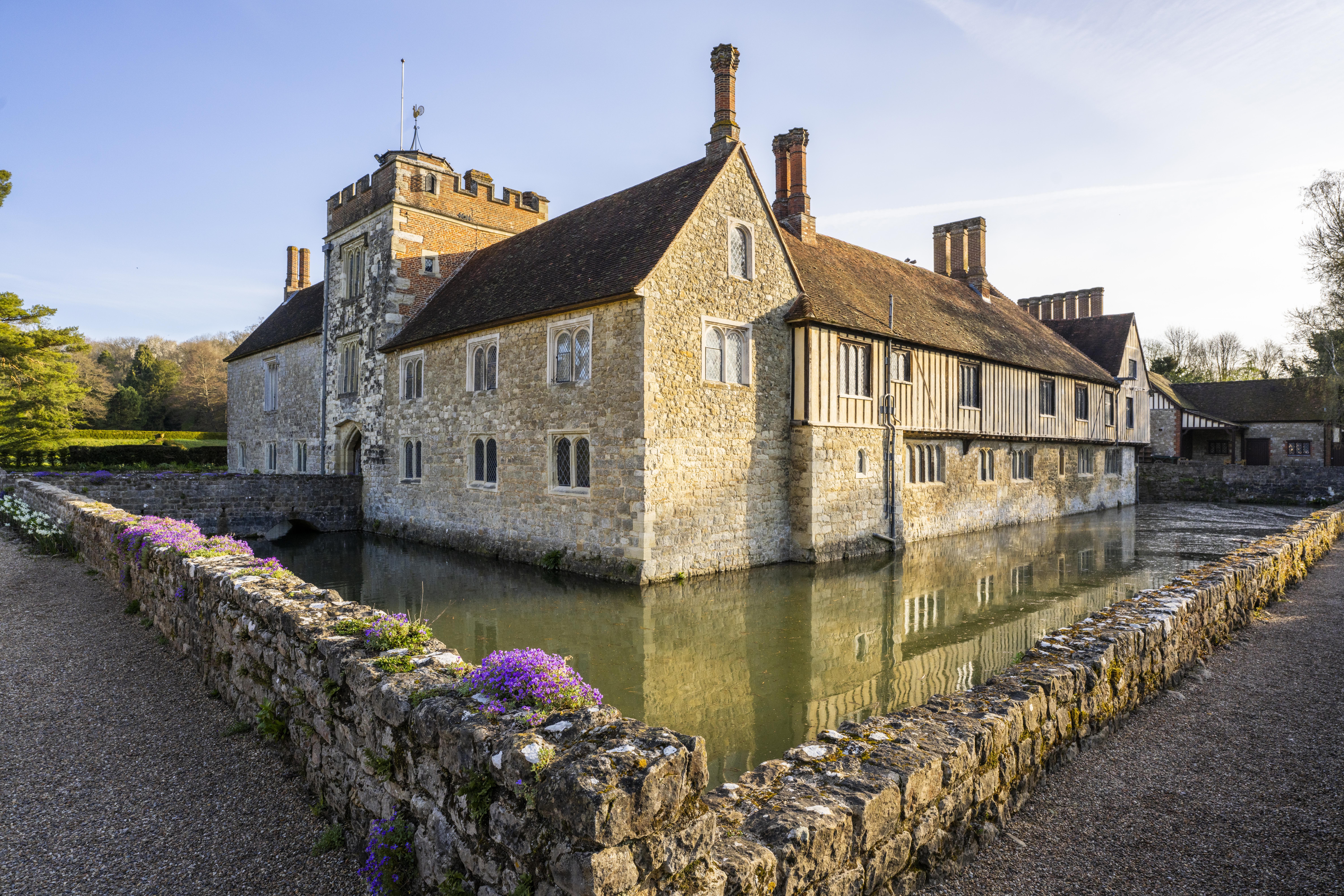 With chromatic aberration and distortion compensation turned on from the lens compensation menu in the camera, the built-in lens profile that’s applied automatically to raw files did a fine job of correcting these optical deficiencies to the extent no fringes of colour or obvious bowing of straight lines were visible in my real-world images. The way I look at it, there’s little, if any reason, to ever need to turn these lens compensation aids off. 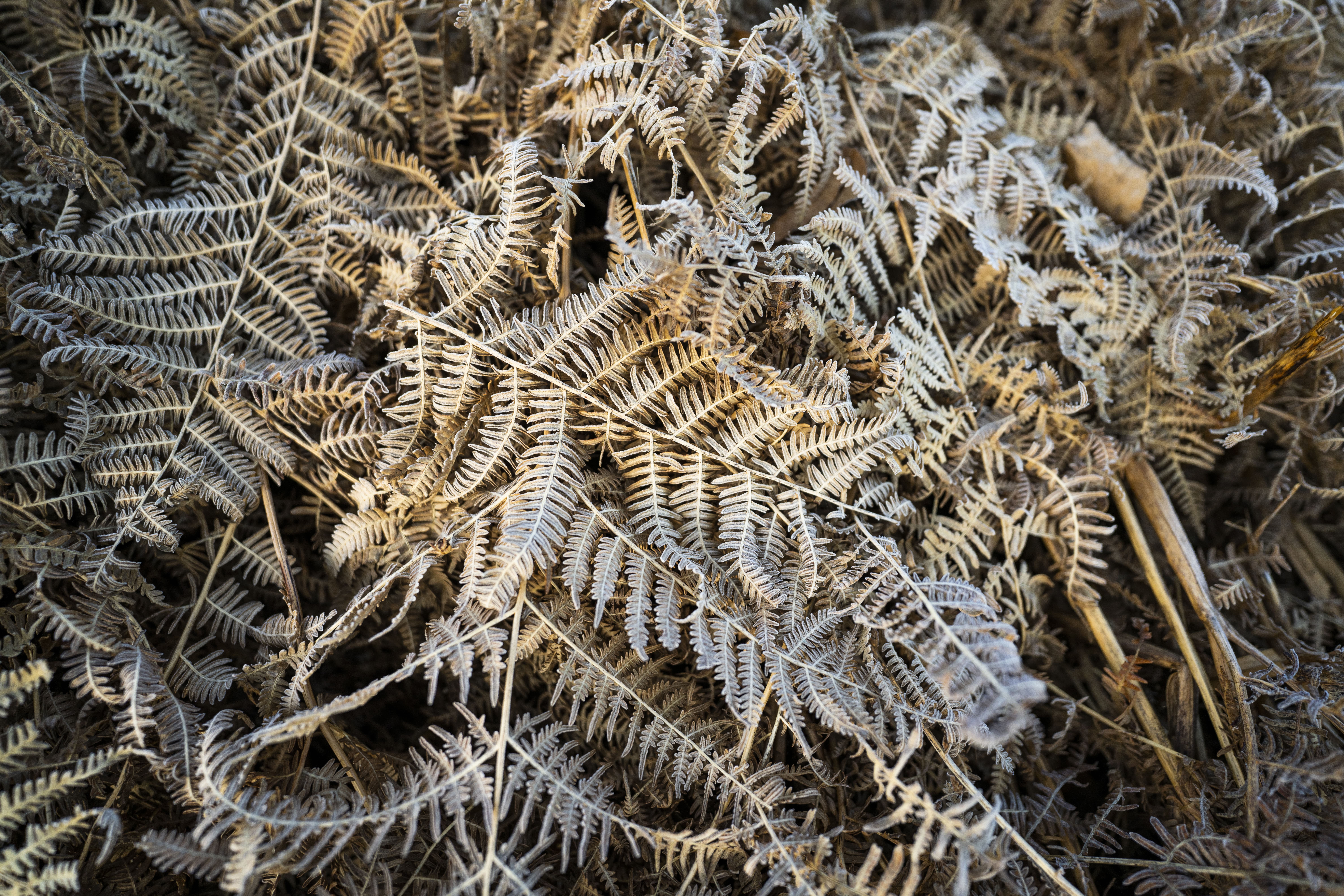 As for shading correction, this is also accessed via the lens compensation options in-camera. This effectively curtails, but doesn’t completely remove the vignetting at the far corners at f/1.8. Stop down to f/2 and f/2.8 and you’ll notice vignetting is quick to disappear, with no trace whatsoever at f/4 or beyond. Overall, it’s an extremely impressive optical performance from such a small and lightweight wide-angle prime.

As briefly mentioned earlier, Sony has some exceptional lenses in its lineup for users of their full-frame A7-series cameras. Though the FE 20mm F1.8G isn’t a G Master lens, don’t let this fool you into thinking that it’s not one of Sony’s finest.

As I discovered during my lengthy period of testing, it excels in all the key areas a wide-angle prime lens should, providing fast and quiet focusing, mesmerising sharpness at wide apertures in challenging low-light conditions and advanced aperture control for stills and movie shooting via an aperture ring with a clever ‘de-clickable’ switch. In my personal opinion it’s certainly deserving of G Master status. 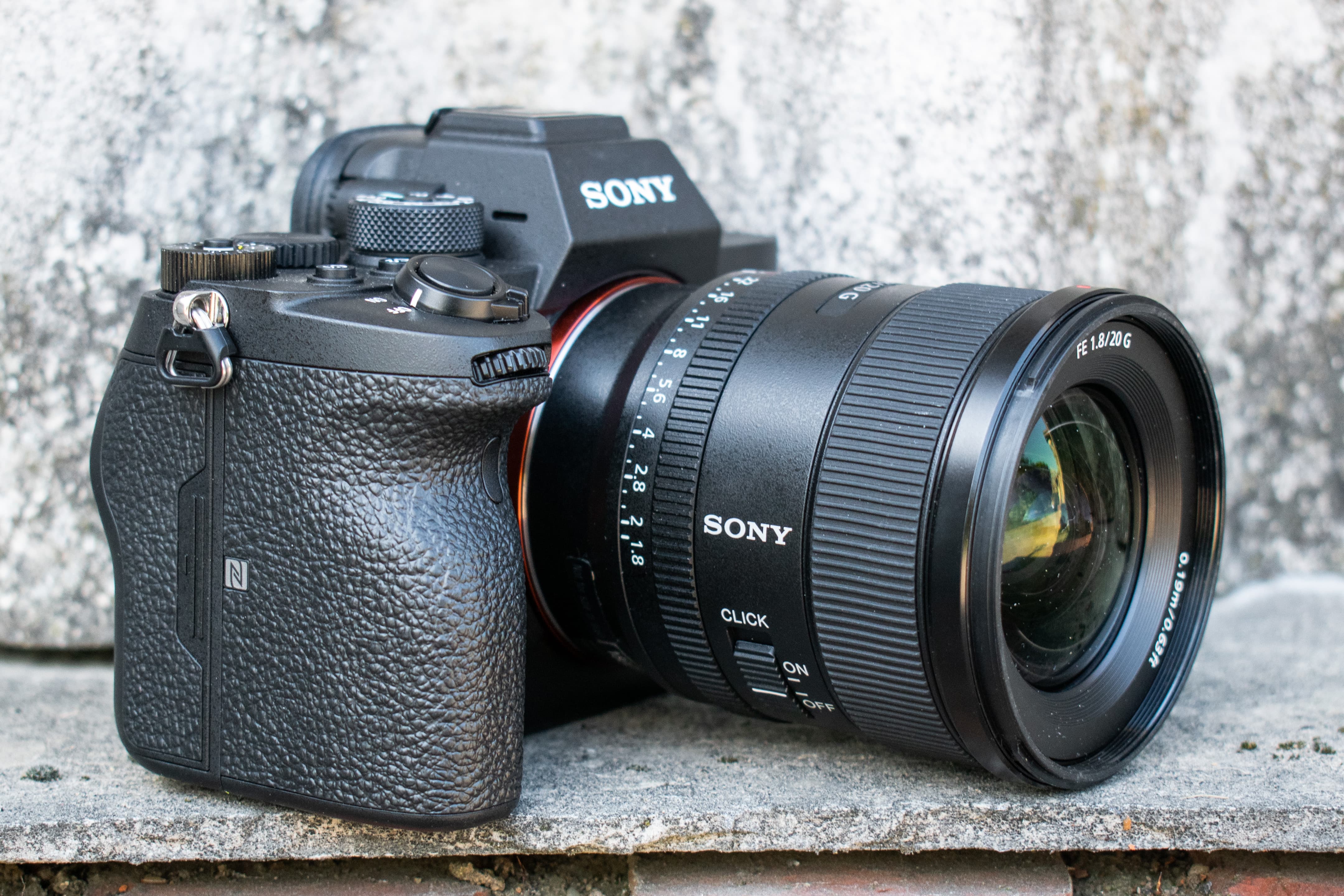 It isn’t out of its depth when it’s used with Sony’s high-resolution cameras either. Stunning close-ups are possible, contrast is excellent and it compliments the fit and finish of high-end mirrorless cameras like the Sony A7R IV with a solid, hardwearing build quality of its own. Add its compact size and the fact it weighs just 373g to the mix and it makes for an ideal companion when you wish to work or travel light.

Though it is on the expensive side at £949 and you can pick up many third-party wide-angle primes for less, none are as fast and as compact as the FE 20mm F1.8G. This is its unique selling point and where it has an advantage over lenses of similar price such as the Zeiss Batis 18mm f2.8 (£949).

Ultimately, if you’re a Sony user looking for one of the best wide-angle prime lenses money can buy, the FE 20mm F1.8G will serve you extremely well and should be seriously considered.