Cons: - No manual focus clutch (or switch)
- No L-Fn button
- C-AF performance not quite as good as f/2.8 version 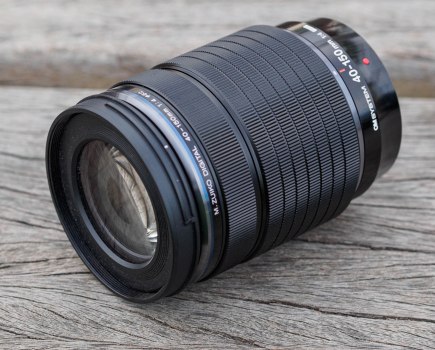 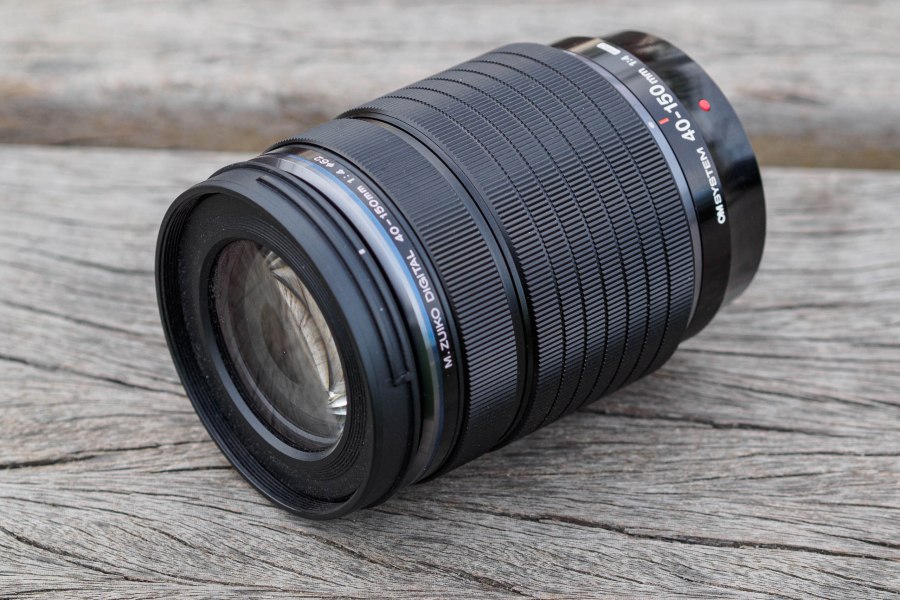 
Cons: - No manual focus clutch (or switch)
- No L-Fn button
- C-AF performance not quite as good as f/2.8 version

Since splitting off from Olympus and becoming an independent entity, OM Digital Solutions (OMDS) has shown no sign of slowing down its release rate of new cameras and lenses. Announced alongside the flagship OM-1 camera, the M.Zuiko Digital ED 40-150mm F4.0 PRO is its second all-new optic under the OM System brand, after the M.Zuiko Digital ED 20mm F1.4 PRO. It’s a compact, weather-sealed telephoto zoom than employs a space-saving retractable design and promises premium optics. With a zoom range equivalent to 80-300mm on full-frame, it’s designed for use with Olympus and OM System cameras but can also be used on Panasonic Lumix G-series MFT bodies. 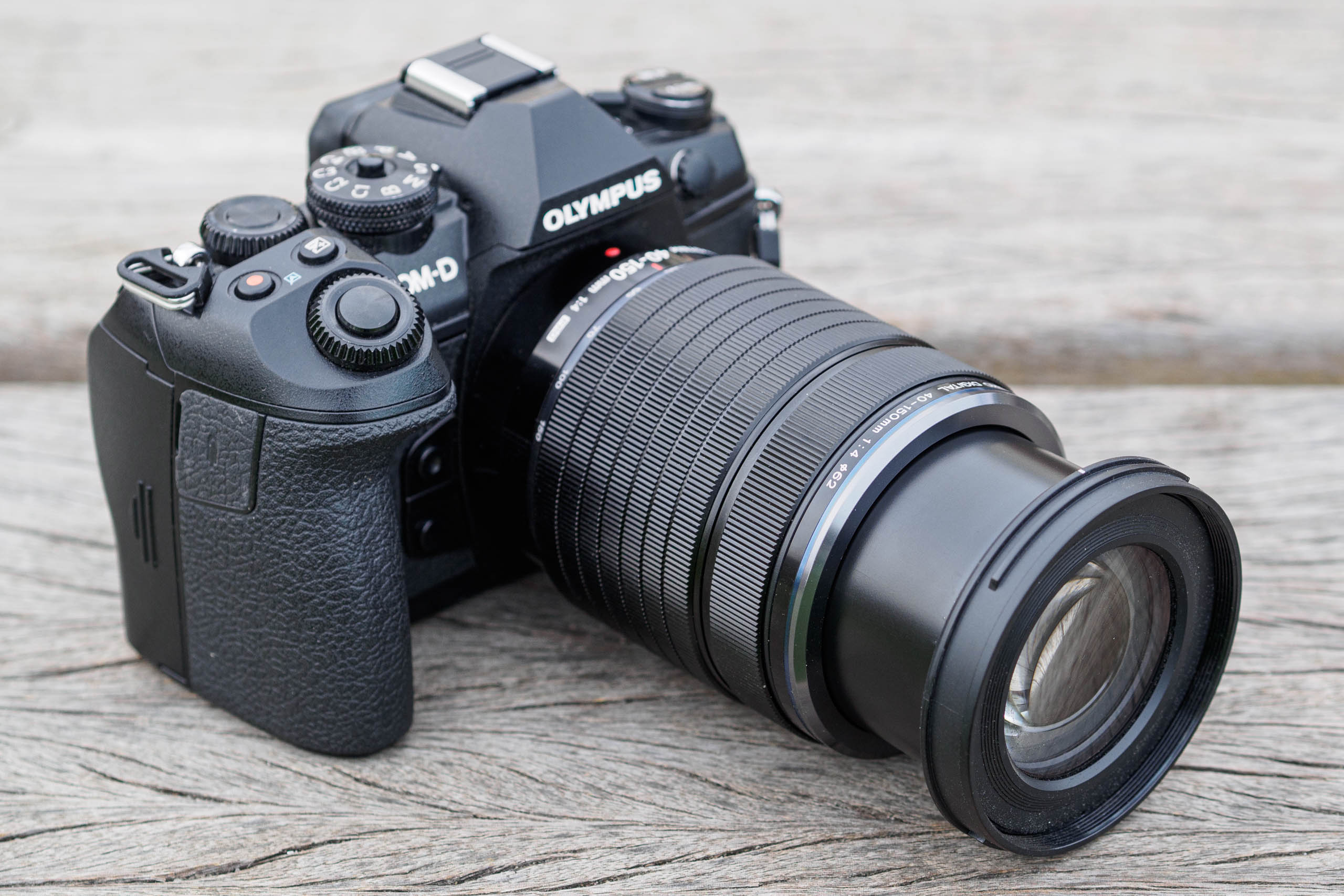 The OM System 40-150mm f/4 is a compact premium telephoto for use on Micro Four Thirds cameras, such as the Olympus OM-D E-M1 Mark III here

OMDS says the lens is, in effect, a scaled-down version of the Olympus M.Zuiko Digital ED 40-150mm F2.8 PRO, with an optical formula derived from its larger-aperture sibling. This is likely to be a good thing, given that the 40-150mm f/2.8 gives excellent image quality. However, like the Olympus M.Zuiko Digital ED 12-45mm F4.0 PRO and the aforementioned 20mm f/1.4, the new lens also employs a simplified physical design, with neither a programmable L-Fn button on the barrel, nor a focus ring that can be snapped back towards the camera to engage manual focus.

At £799, the 40-150mm f/4 neatly occupies the middle ground between its £1099 f/2.8 sibling and the entry-level M.Zuiko Digital ED 40-150mm F4-5.6 R, which costs around £210. It’s clear that OMDS views it mainly as a travel-friendly option that should nicely complement small cameras like the Olympus OM-D E-M5 Mark III, rather than an action-friendly option for E-M1 or OM-1 users. But how does it stack up in practice?

In terms of optical design, the 40-150mm f/4 bears a close resemblance to the f/2.8 version. It employs 15 elements in 9 groups, including two made from extra-low dispersion (ED) glass, one each from super ED glass and high refractive-index (HR) glass, and two aspherical elements, all working together to suppress optical aberrations. The firm’s ZERO coating is applied to minimise flare and ghosting. As usual, the overall aim is to give images that are crisp across the frame and throughout the entire zoom range. 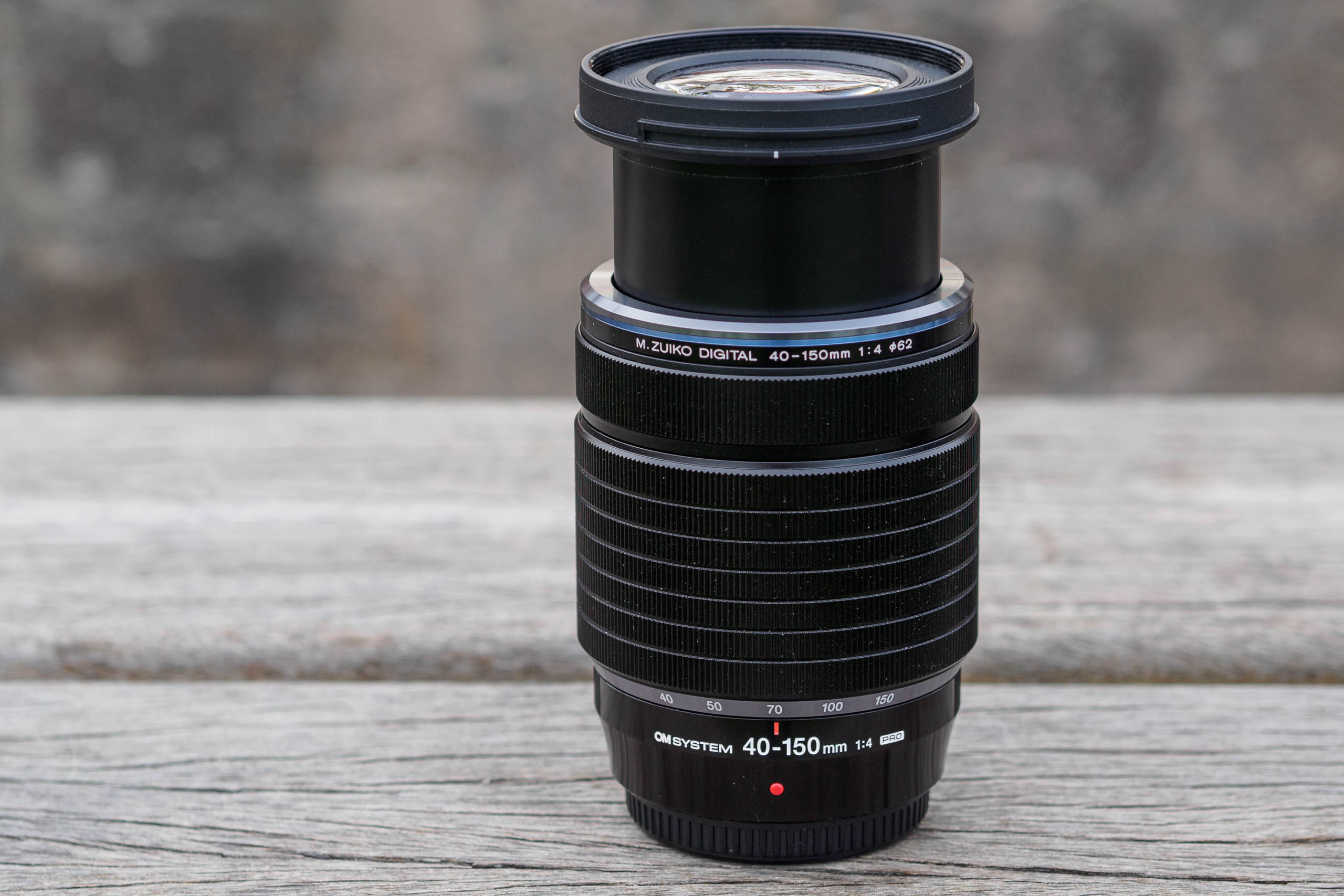 Twisting the zoom ring extends the lens from its packed position ready for use. At this point, it zooms and focuses internally.

When it comes to the physical design, though, the f/4 lens is very different to its big brother. At 99.4mm long and 382g, it’s less than half the weight, and two-thirds of the length. In fact it’s only 13mm longer than the f/4-5.6 lens, although it’s still twice the weight. OMDS has achieved this compact size with a unique take on the retractable zoom design. Twist the zoom ring from the packed position and the lens extends by 3cm ready for use. But beyond this, it both zooms and focuses internally. 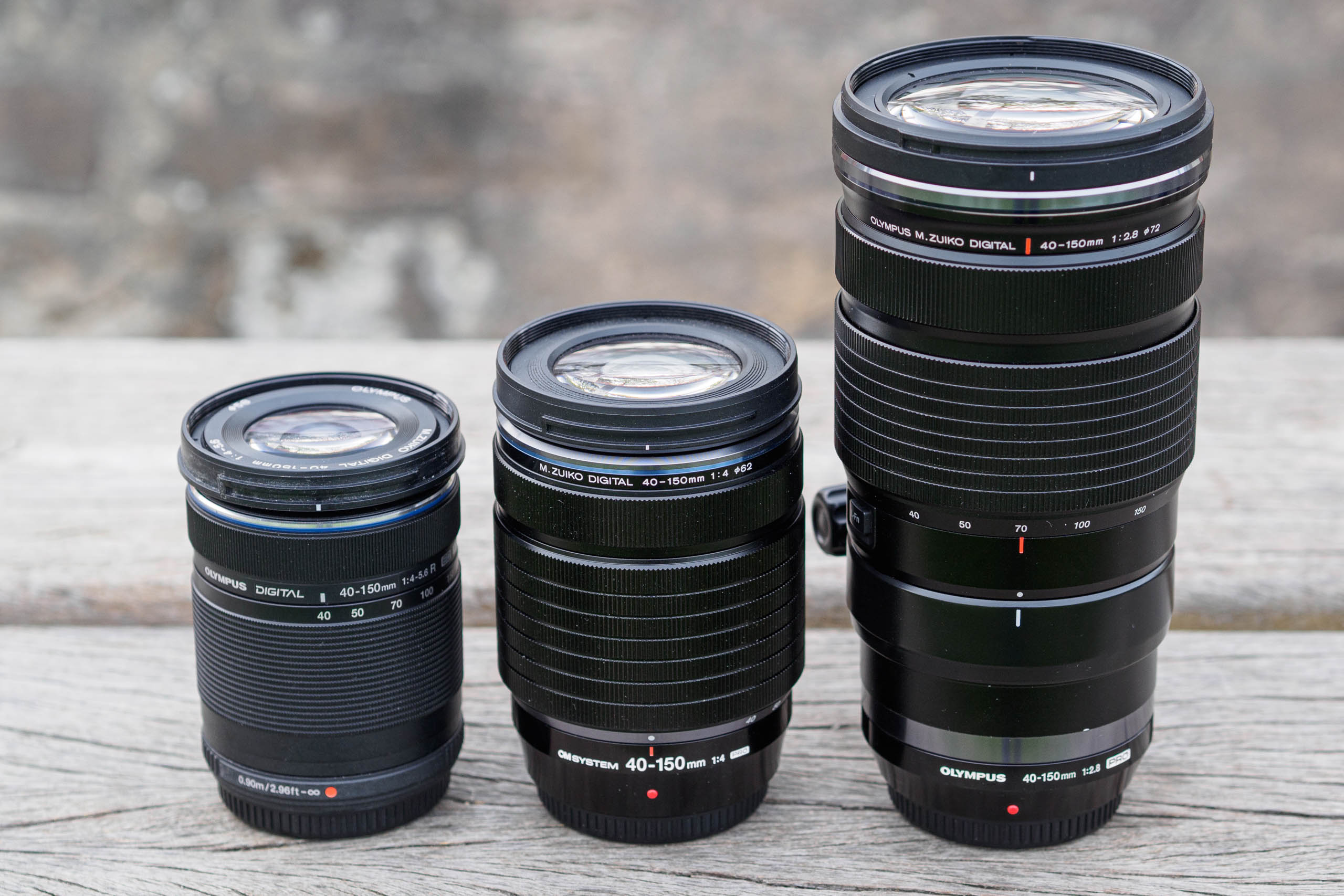 What you don’t have to give up, though, is robustness. Like the other Pro-series lenses, the 40-150mm f/4 boasts an IP53 rating for water-and dust resistance, while being freezeproof to -10 °C. A fluorine coating is applied to the front element to combat fingerprints and raindrops. 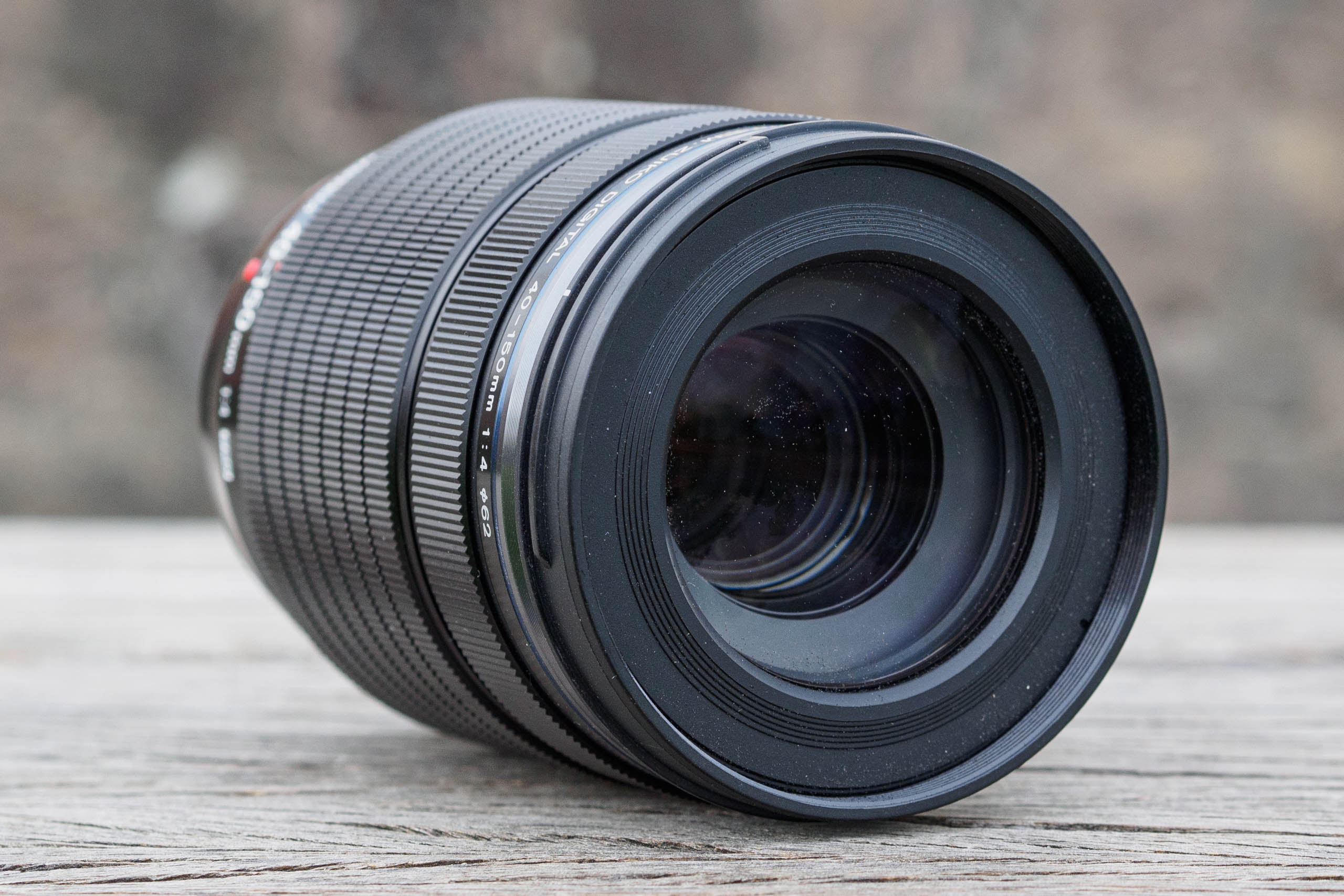 Other features include a 7-blade aperture diaphragm and a minimum focus distance of 70cm throughout the zoom range. A deep bayonet-fit hood is supplied and boasts a locking button to keep it in place. 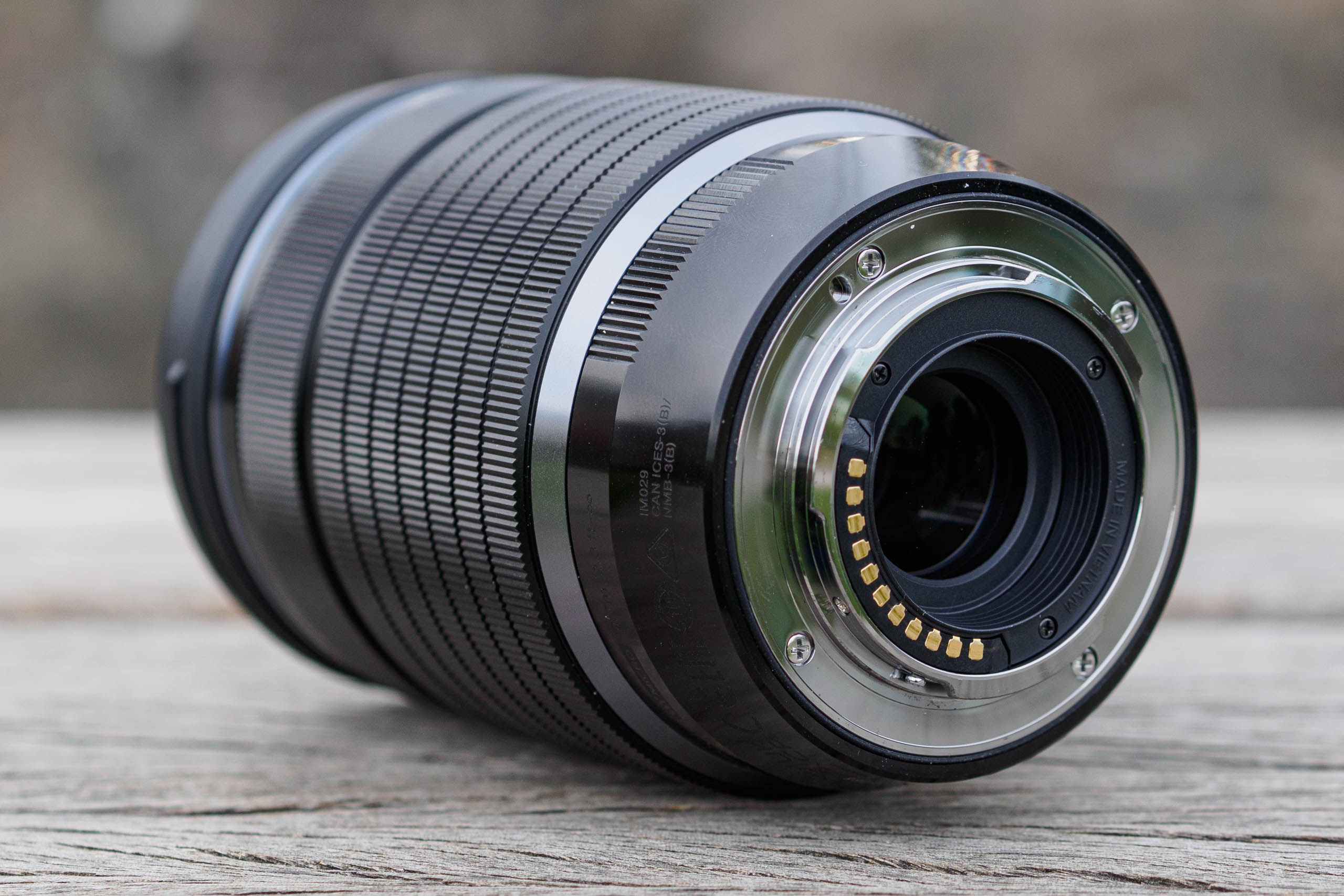 The 40-150mm f/4 boasts extensive weathersealing, including an O-ring around the mount

The lens employs 62mm filters, a size that’s conveniently shared with the firm’s 12-40mm f/2.8 Pro zoom and trio of 17mm, 25mm and 42.5mm f/1.2 Pro primes. It doesn’t accept teleconverters, as a direct consequence of the compact design. It also lacks optical stabilisation, which makes it ill-suited to use on those Lumix G bodies that don’t have in-body stabilisation.

In terms of design, the 40-150mm f/4 looks much like other Pro-series lenses. It’s dominated by the large, distinctively textured zoom ring, with the slimmer manual focus ring towards the front. Both these control rings and the rear barrel section are crafted from metal, while the extending section is plastic skinned. 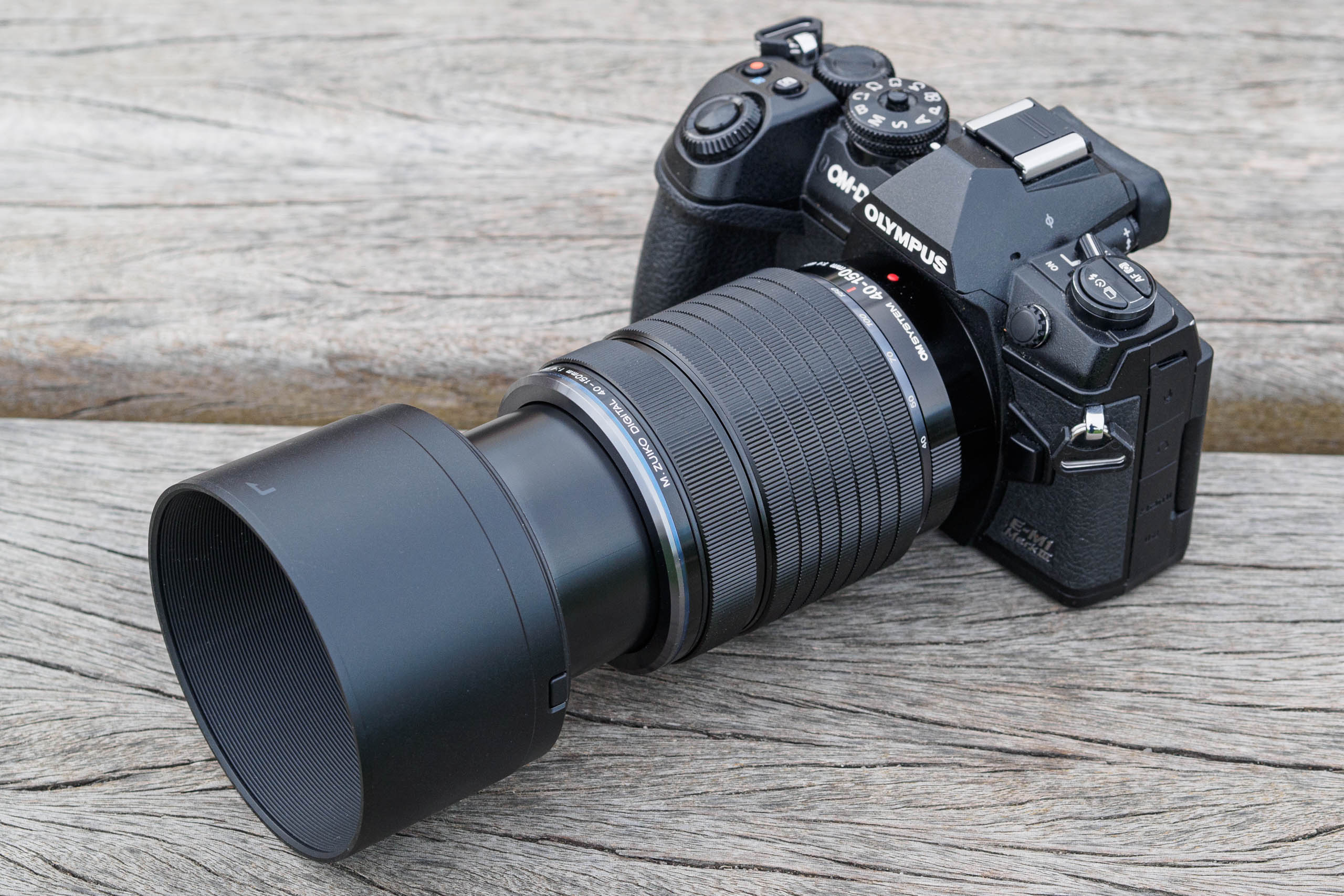 OMDS has done a great job with the collapsing barrel design, which works really well. When the lens is retracted, the camera will show a message in the viewfinder that prompts you to extend it for use. Then once it’s in the shooting position, the preview image appears, and you can use it like any other lens. 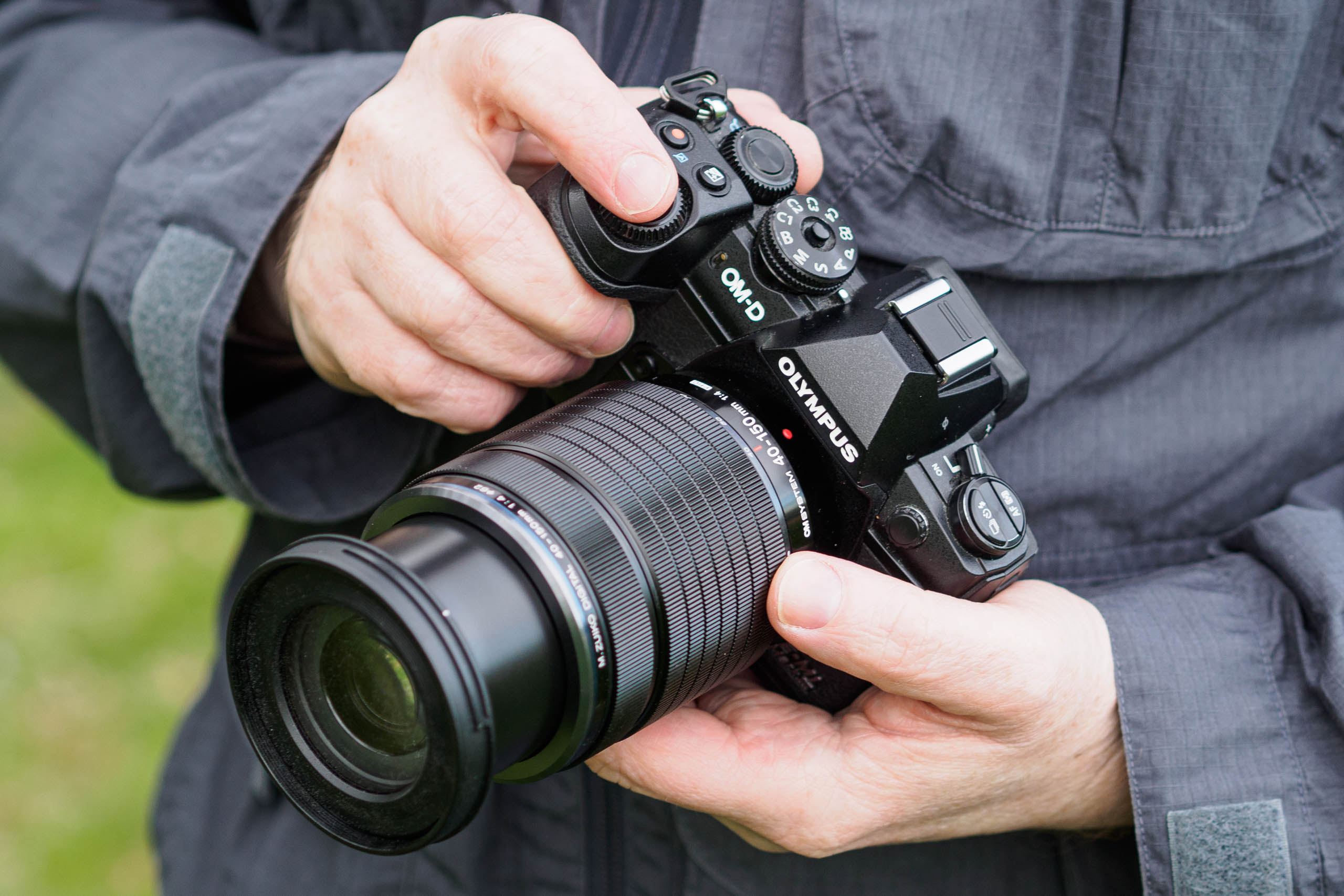 Even when extended for use, the 40-150mm f/4 is one of the smallest 300mm-equivalent lenses around

There’s a distinct hard stop when you zoom out to 40mm, so you shouldn’t ever find yourself retracting it accidentally. But when the time does come to pack it away, a sharp twist of the zoom rang takes it back to the retracted configuration. 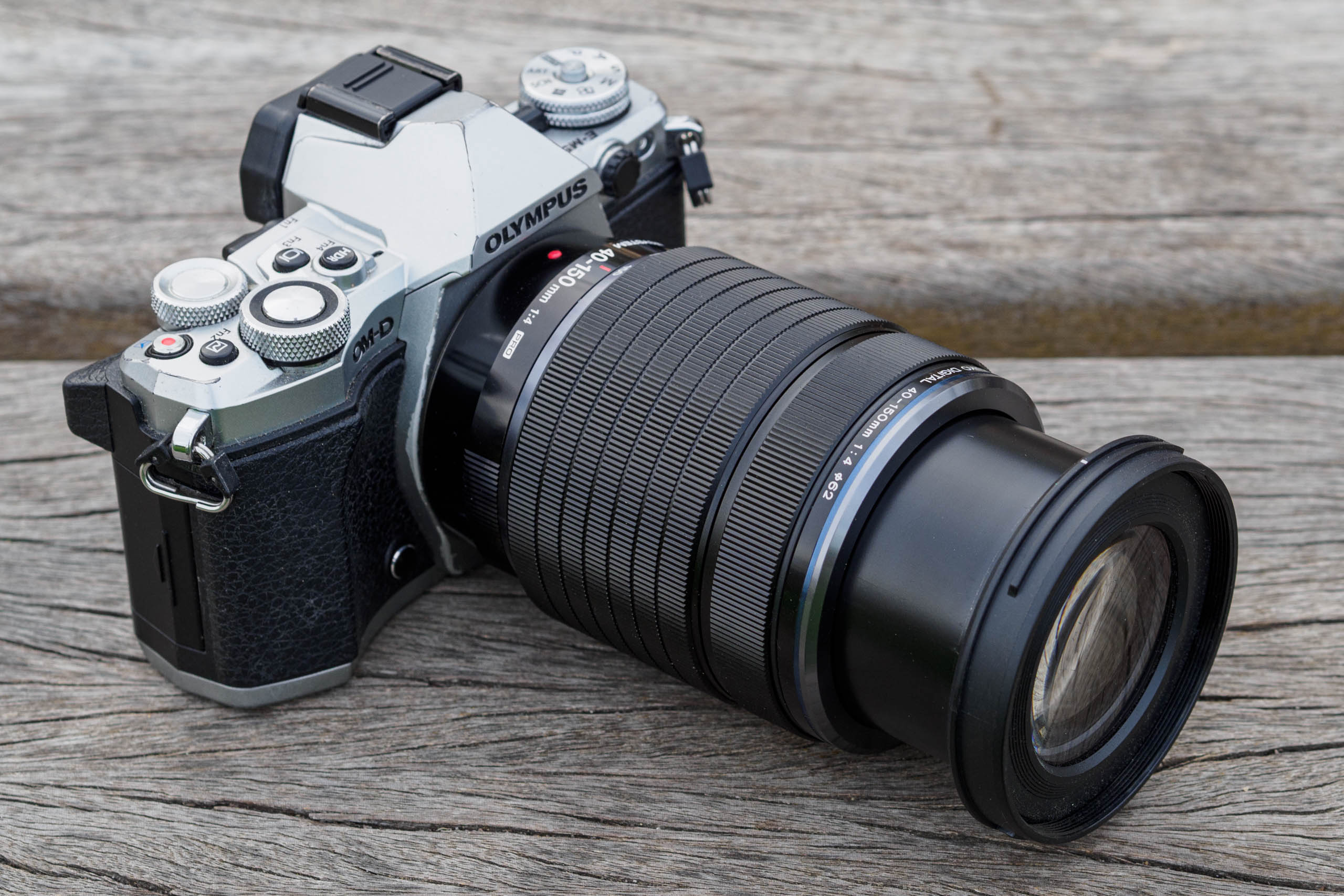 With its relatively light weight, the lens feels perfectly well balanced even when used on smaller Micro Four Thirds cameras, such as the mid-range E-M5 series. It’s not quite such a featherweight as the plastic-barrelled 40-150mm f/4-5.6, but in real-world use the difference isn’t huge. It’s certainly a contrast to the f/2.8 lens, which is best suited to the OM-1 and E-M1 series cameras, thanks to their much larger handgrips.

Unusually for a telephoto zoom, OMDS doesn’t make any great claims for the 40-150mm f/4’s autofocus performance. Indeed for OM-1 users, it’s worth noting that the lens doesn’t support 50fps shooting with continuous AF, unlike the f/2.8 optic. But this isn’t to suggest that the autofocus is poor. In single AF mode with static subjects, in general it locks focus instantly and accurately. I saw a the occasional misfocused shot, but mostly with small subjects in complex surroundings, such as a garden birds, which can easily confuse AF systems. 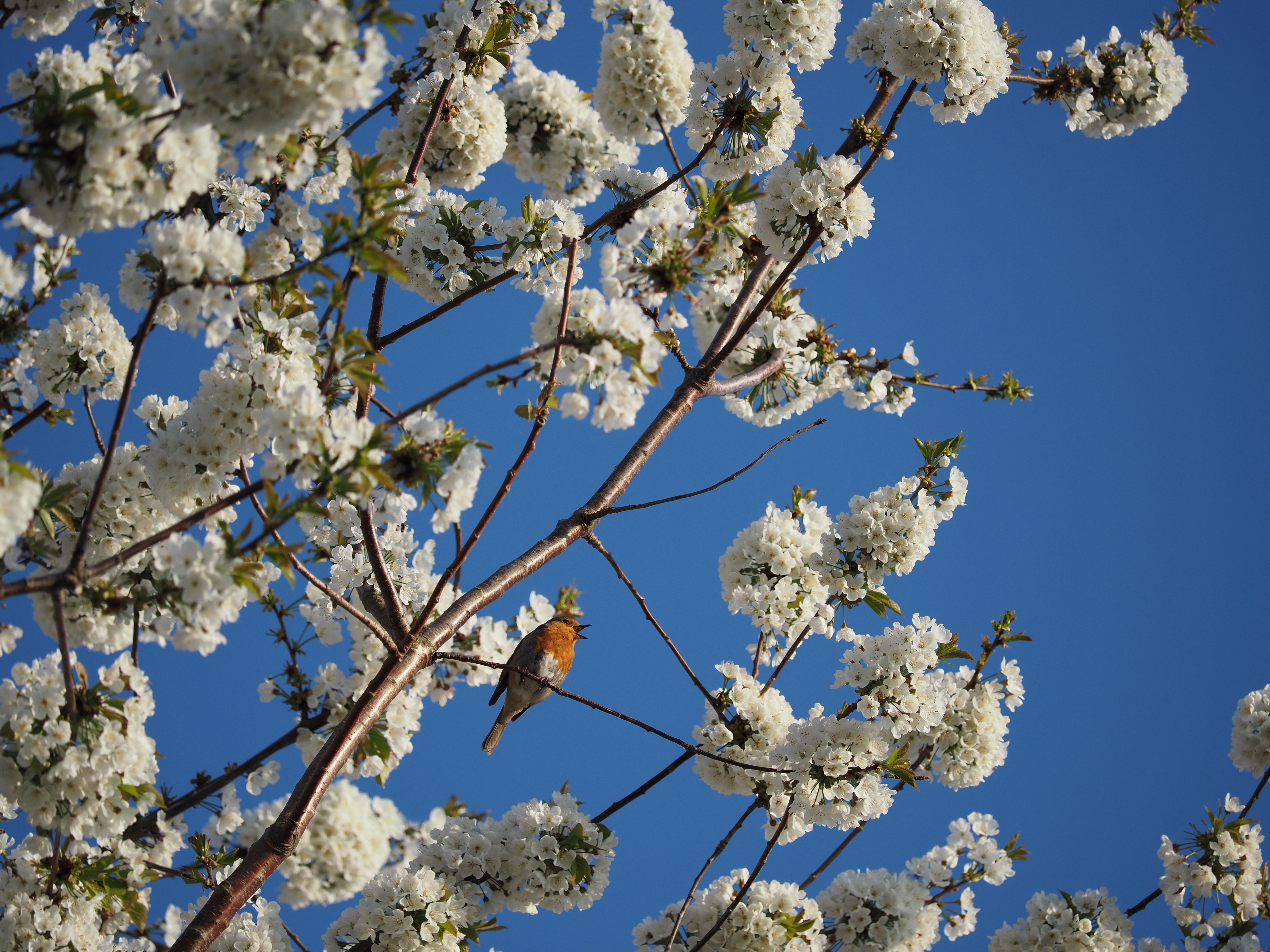 Switch to continuous autofocus, and your experience will depend mainly on what camera you use. Only those bodies capable of phase detection, namely the OM-1, Olympus OM-D E-M1 series, and E-M5 Mark III, are particularly adept at holding focus on moving subjects anyway. Equally, while the lens doesn’t have a physical focus limiter switch to reduce hunting, it supports the software focus limiter setting on recent high-end bodies. 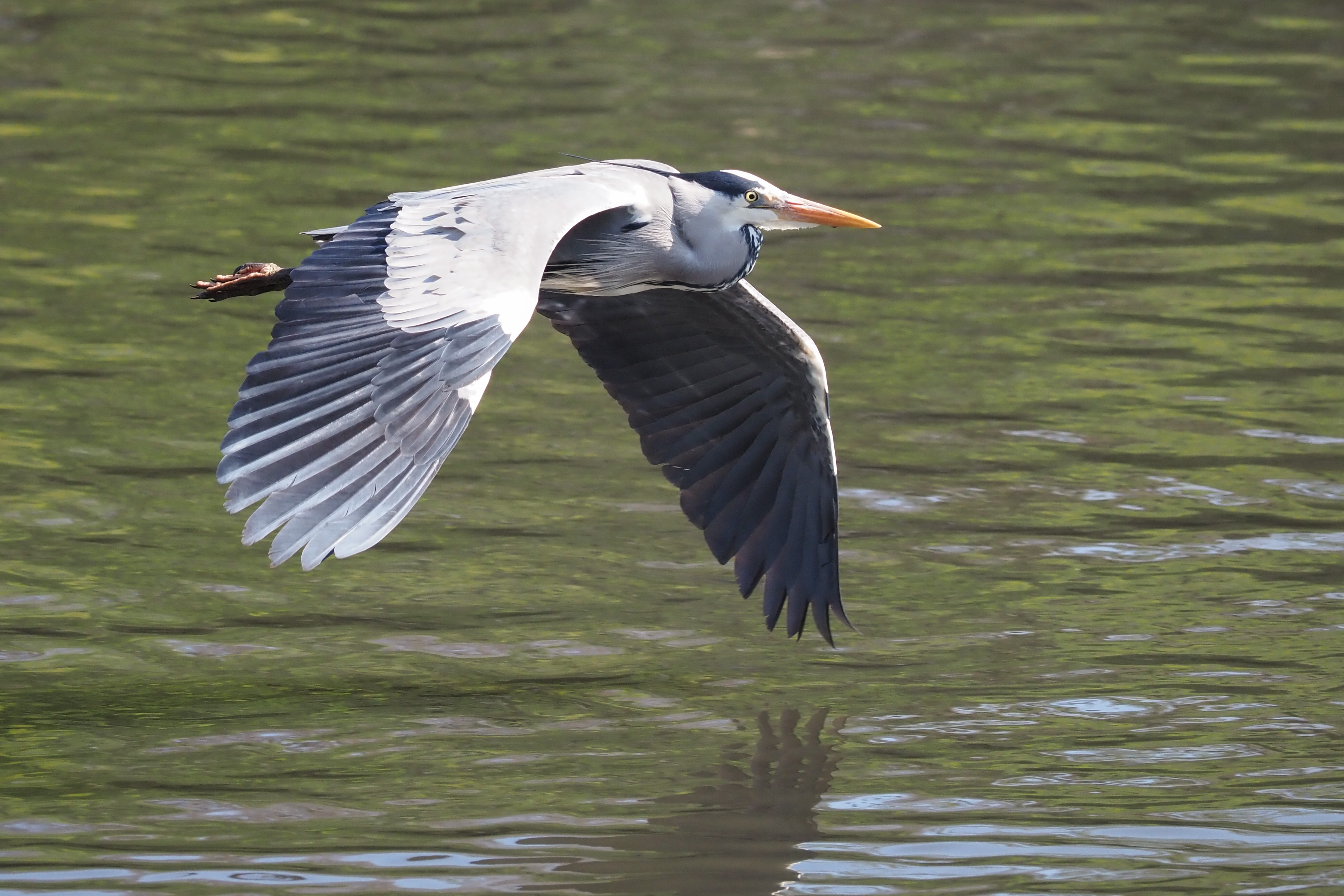 I tested the lens mostly on the Olympus OM-D E-M1 Mark III and found that with moving vehicles or birds in flight, the lens was generally able to keep up pretty well with the camera’s demands. But with fast-moving action, it was prone to lagging just slightly behind the subject’s position. This will usually only be visible when examining images closely onscreen, but even so, photographers who shoot a lot of sport or wildlife should be better served by the f/2.8 lens. 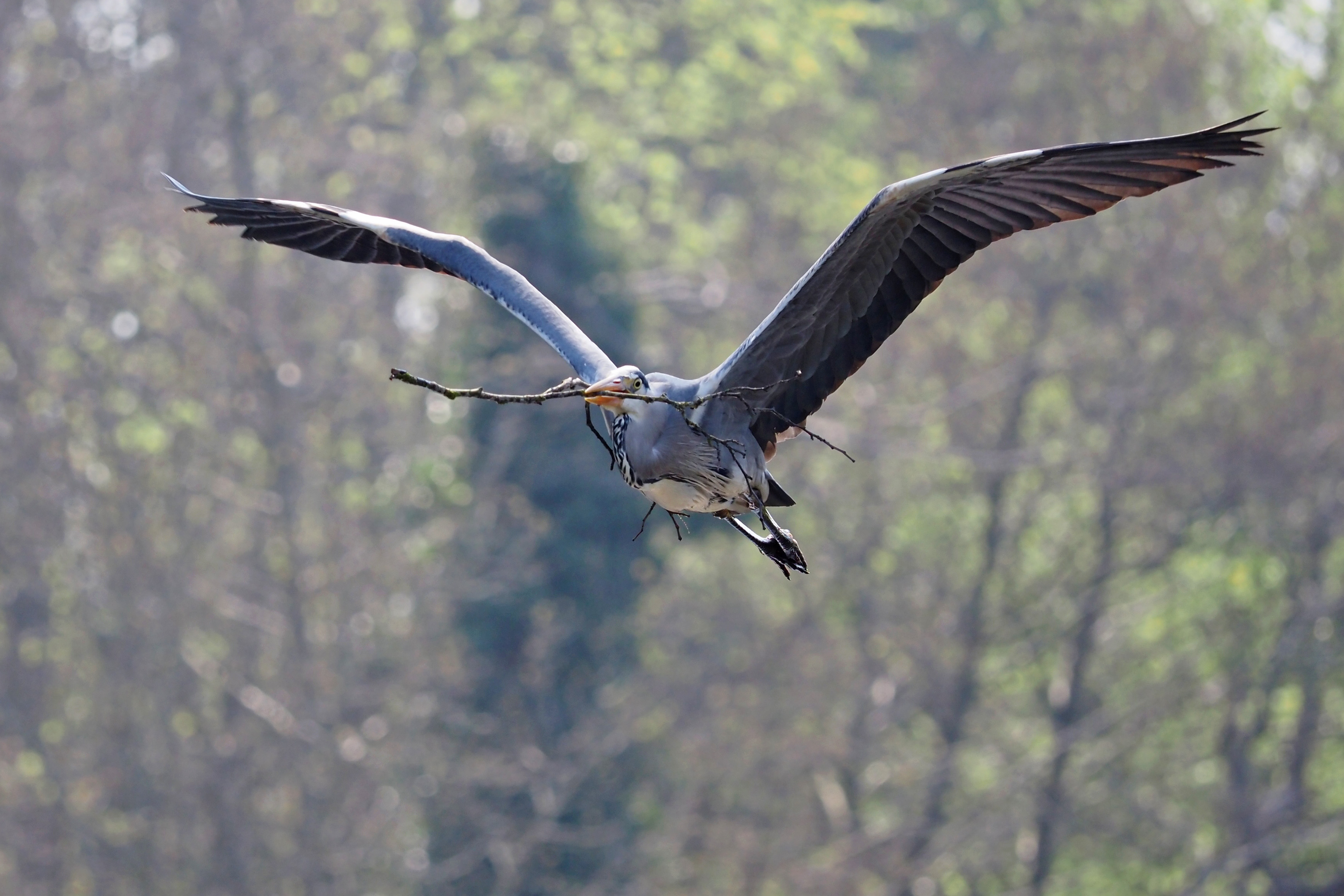 If you do need to focus manually, the lack of a clutch mechanism is an irritation, particularly on bodies that don’t have a switch to engage MF. But the focus ring itself works nicely in allowing smooth, precise adjustment. 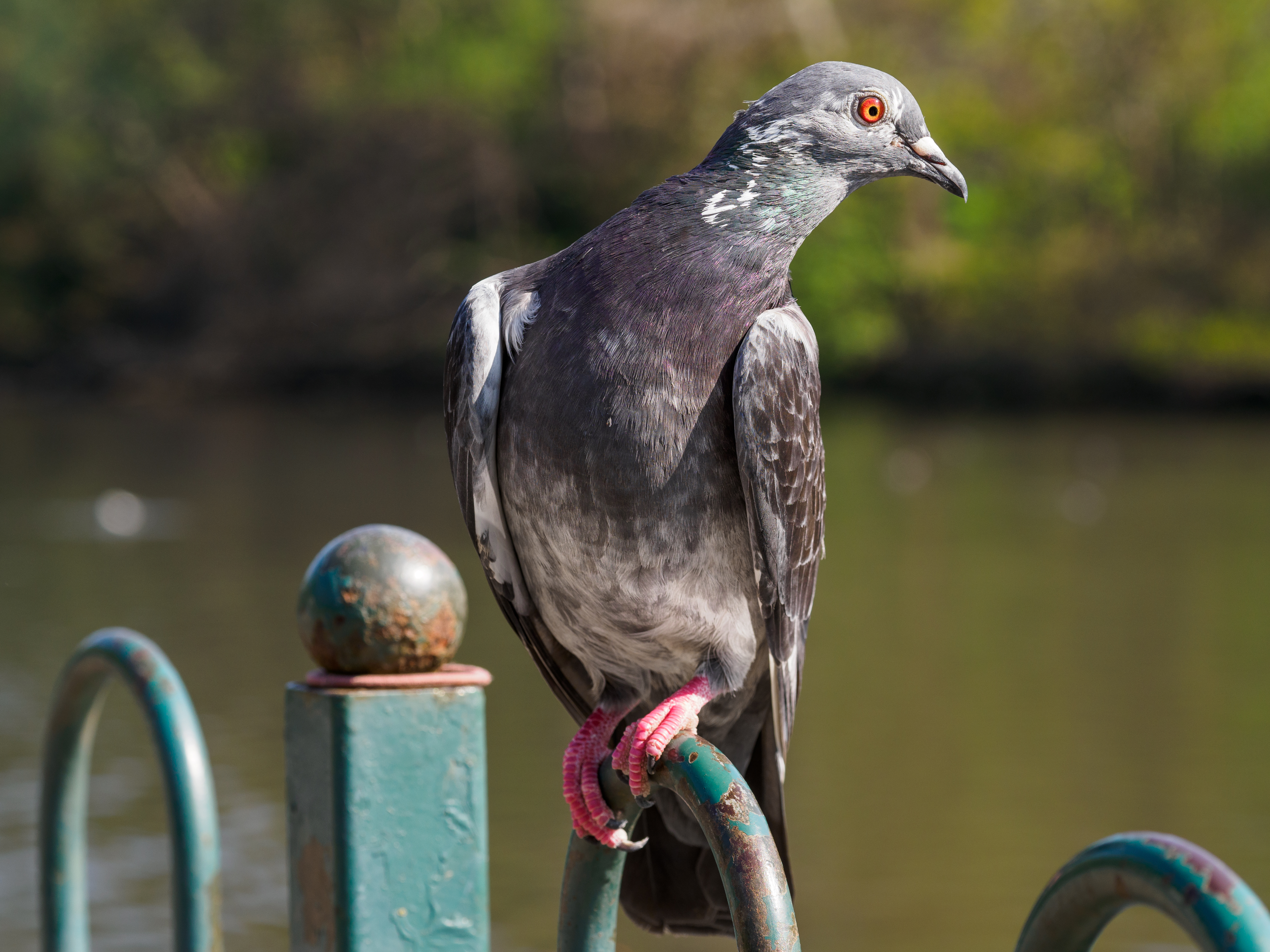 Videographers, meanwhile, will be pleased to hear that the focus motor is essentially silent, and won’t be registered on your soundtrack. Also, the lens exhibits no problematic focus breathing effects. Unfortunately, though, the lack of a clutch mechanism means that the focus ring has no linear response mode, which makes controlled manual focus pulls difficult.

What’s most impressive about the 40-150mm f/4 is its consistent level of sharpness. Quite simply, it delivers images that are packed full of detail from corner to corner at all focal lengths. There’s no need to stop down for extra sharpness, either. Instead, fine detail gradually softens beyond f/5.6 due to diffraction, and as usual with Micro Four Thirds, I’d avoid using apertures smaller than f/11. 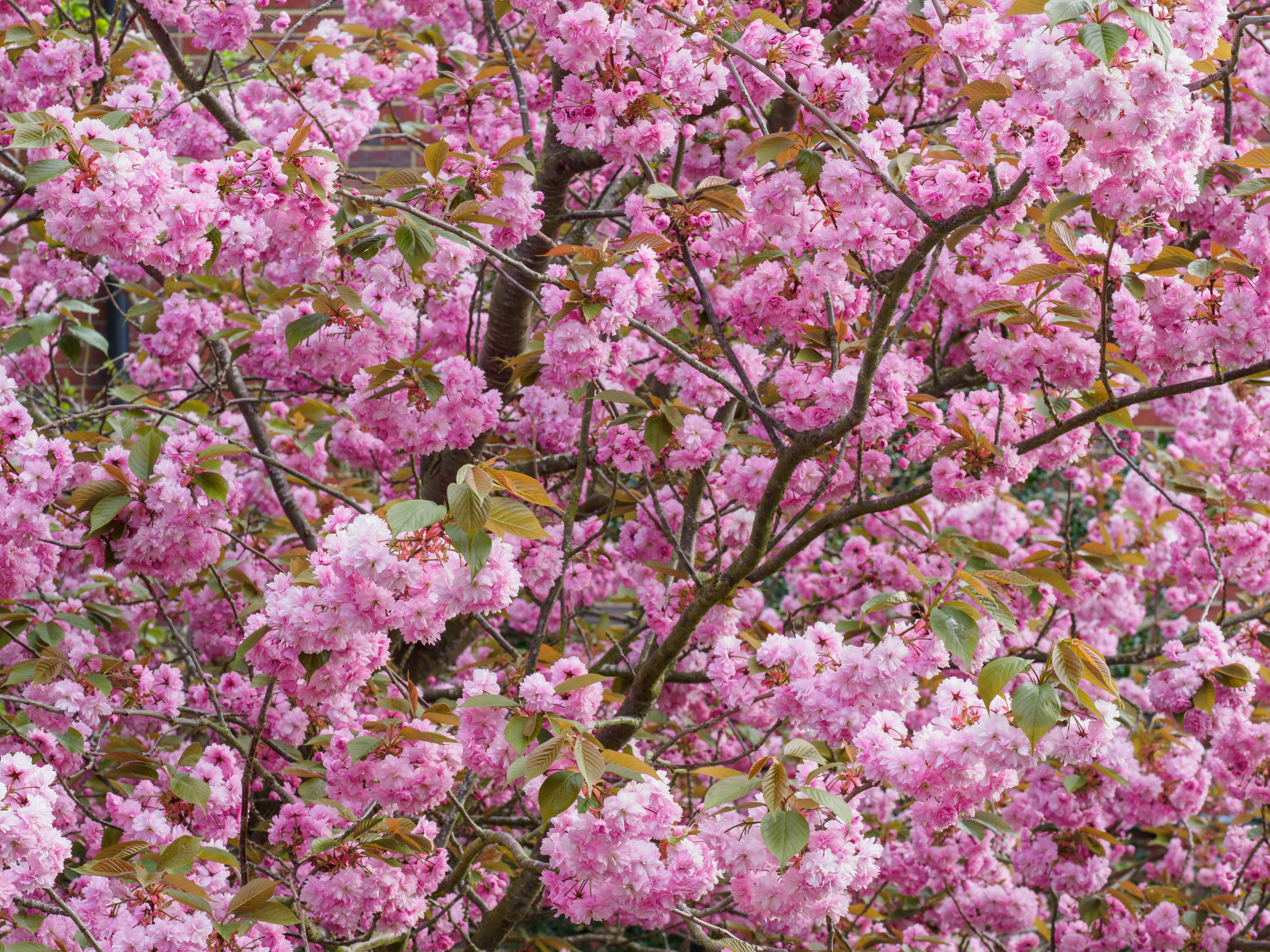 Software aberration compensation is integrated into Micro Four Thirds, which means that barrel/pincushion distortion is corrected automatically in both raw and JPEG, along with colour fringing towards the corners due to lateral chromatic aberration. As a result, straight lines are always rendered properly, while images look clean and detailed across the frame. 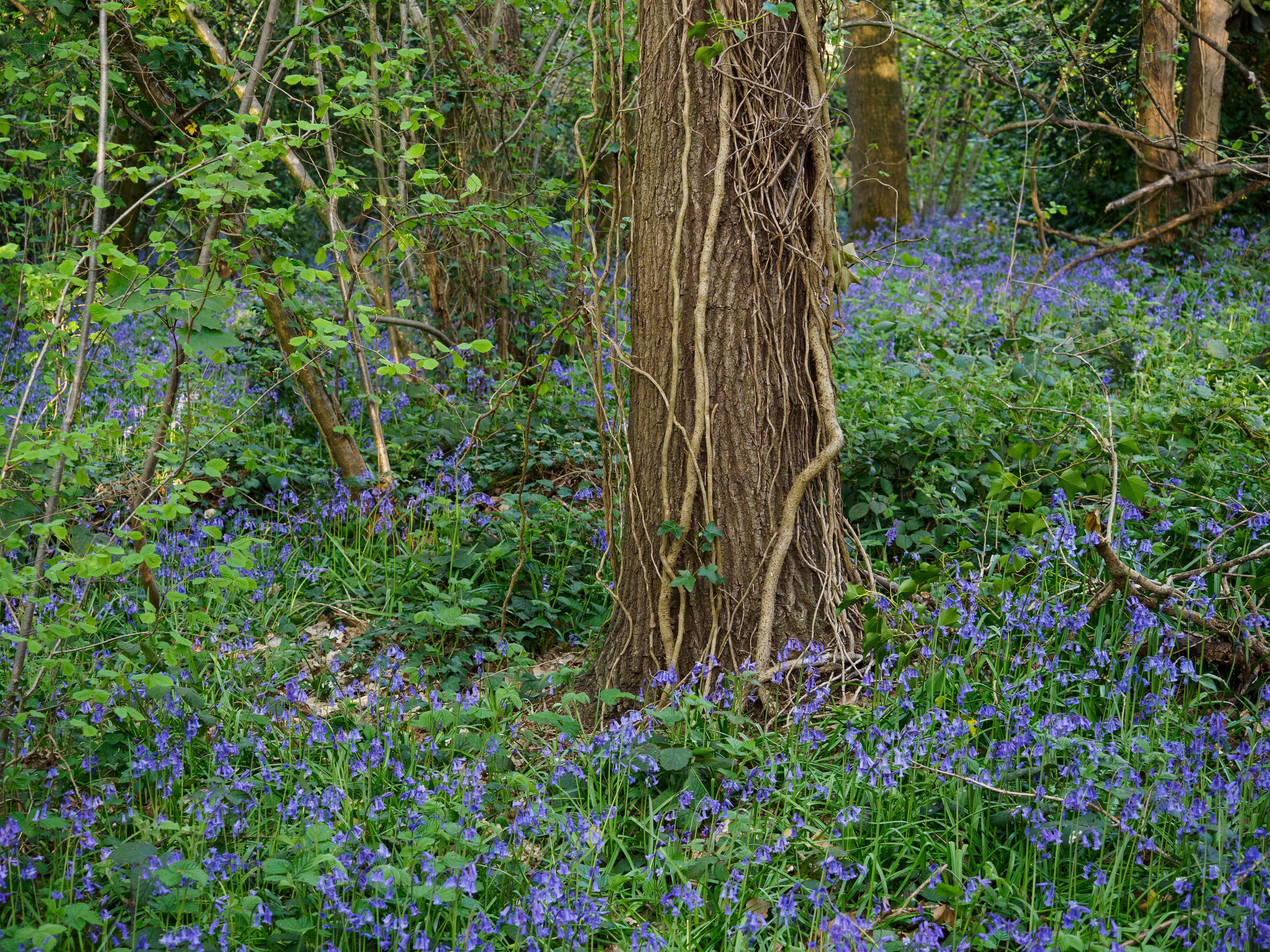 A little colour fringing can be seen around out-of-focus edges in high-contrast scenes at f/4, but it’s not exactly troublesome and can be suppressed using Adobe’s Defringe control if required. There’s barely any vignetting either, with just the slightest hint of corner darkening at f/4, which will only ever be visible if you shoot a completely evenly-toned subject. Likewise, I saw no problems with flare or ghosting, even when shooting directly into the light. 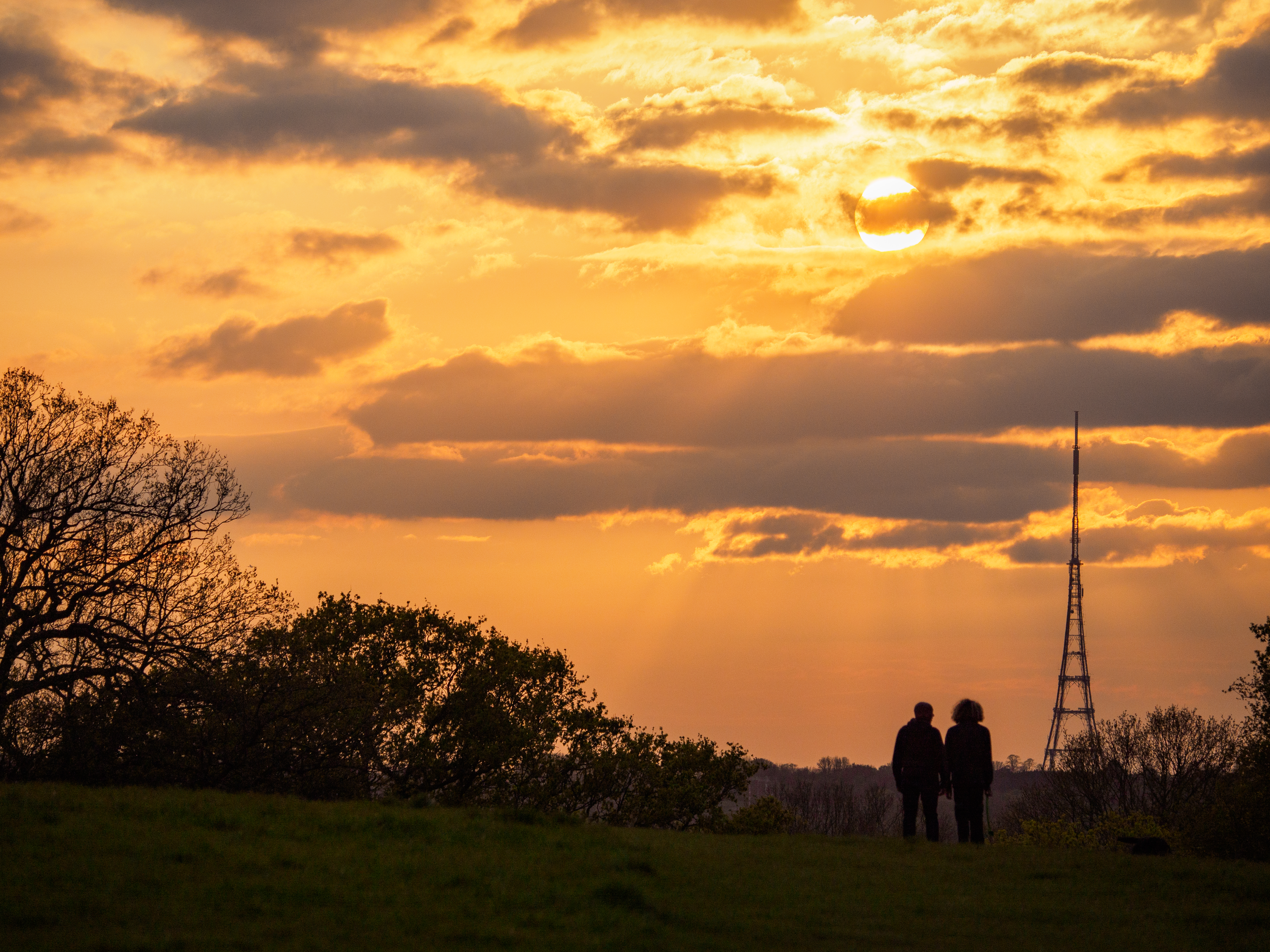 This leaves us to consider a more subjective aspect of image quality, namely the out-of-focus blur or bokeh. Firstly, it’s important to realise that with its f/4 aperture on Micro Four Thirds, this lens doesn’t deliver a huge degree of subject separation or background blur. As a result, distant backgrounds can look a little messy and sometimes detract from the subject. So it’s a case of choosing them carefully, rather than just relying on the lens to blur them away. 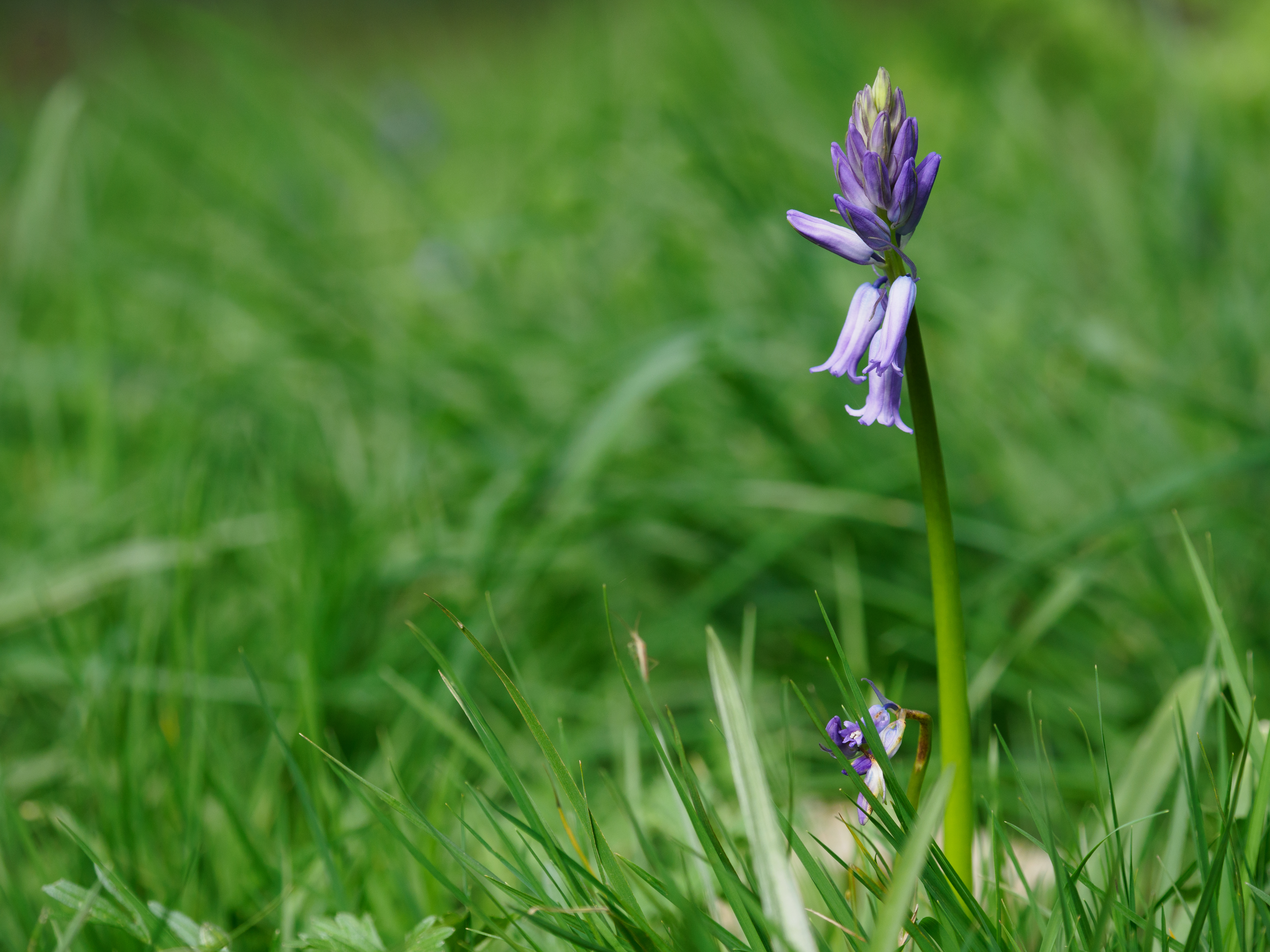 On a more positive note, the lens does deal nicely with the transition from in-focus to out-of-focus regions, which makes it a good choice for close-up work. 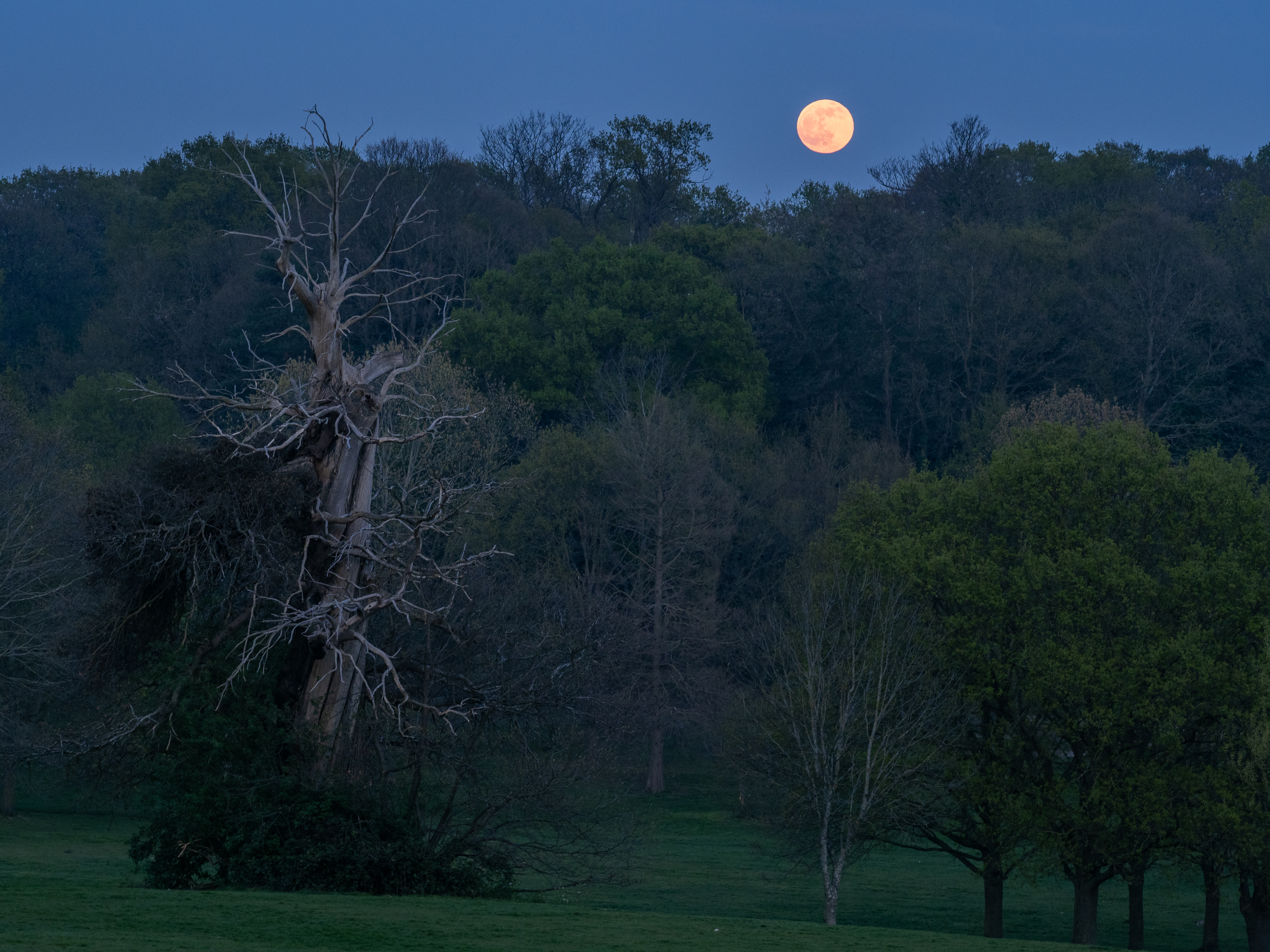 While there’s no optical stabilisation on board, in-body stabilisation is very effective in this focal length range. Using the E-M1 Mark III, I was able to get consistently sharp shots at about 1/10sec towards the wide end of the zoom, and 1/40sec at telephoto. With many of the subjects that this lens is likely to be used for, such as sports, wildlife, or pets, motion blur will be a bigger problem than camera shake.

In many respects, the OM System M.Zuiko Digital ED 40-150mm F4 PRO delivers nicely on its promise. Like the 12-45mm f/4, it adapts the optical design of its larger, more expensive f/2.8 sibling to deliver lovely crisp images from a small, lightweight package. Indeed, it’s remarkably small for a 300mm equivalent lens with premium optics. You don’t even have to go searching for a sweet spot in terms of focal length and aperture, as it delivers plenty of detail at f/4. The real trick is not to stop down too far. 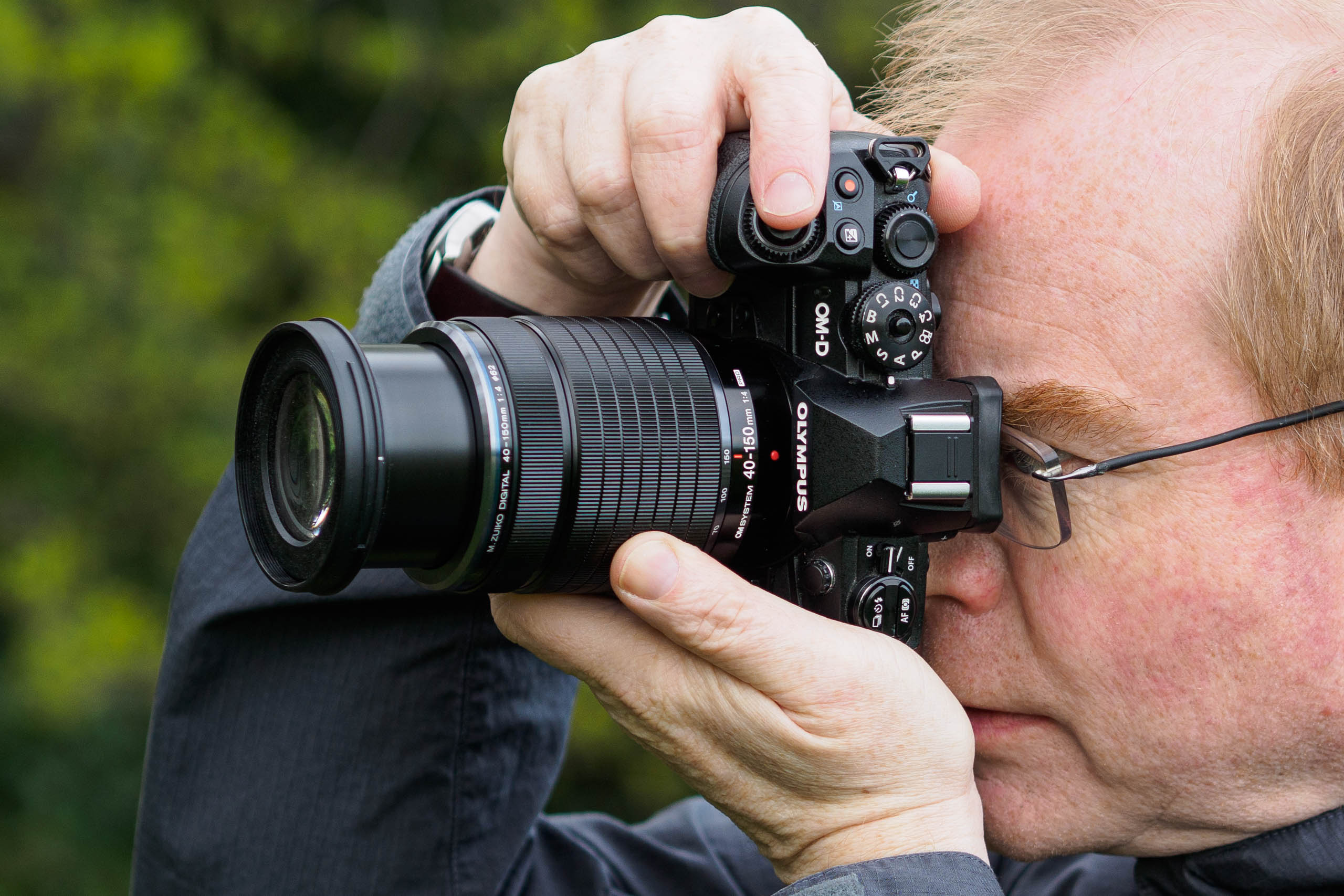 There are, however, some compromises to accept in return for the compact size. Naturally the f/4 maximum aperture isn’t great for blurring backgrounds, while autofocus isn’t quite as good at keeping up with fast-moving subjects compared to more expensive optics, either. But I suspect many users will happily accept these drawbacks in return for the lens’s sheer portability. 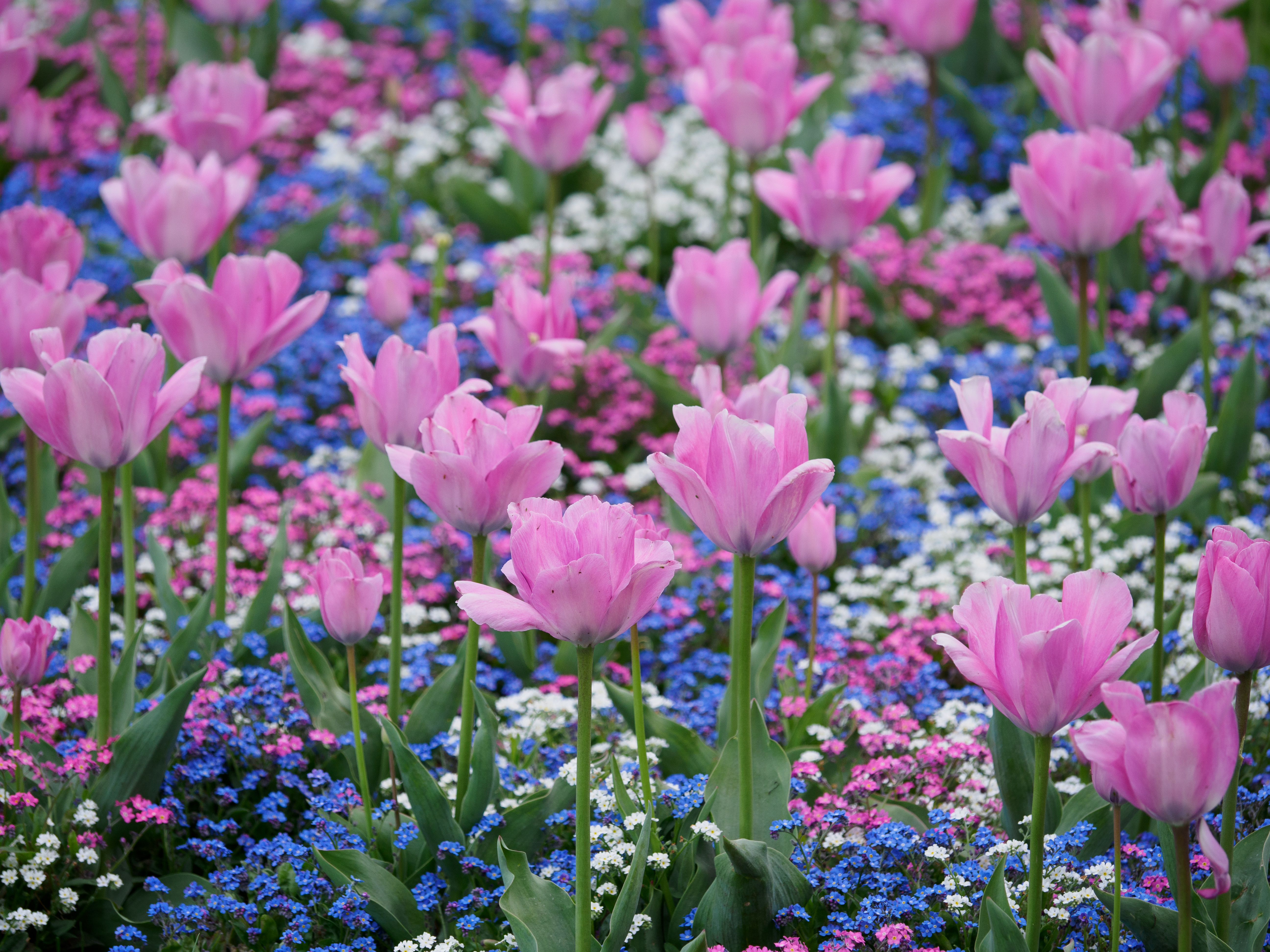 Overall, then, the 40-150mm f/4 is a fine little lens that neatly fills a gap in the M.Zuiko line-up between the entry-level and f/2.8 Pro zooms that cover the same range. It’s a particularly good match for compact Micro Four Thirds bodies such as the E-M5 Mark III, but is just as good a choice for E-M1/OM-1 users looking to travel light. It would make an excellent companion for either the 12-40mm f/2.8 or 12-45mm f/4.5 standard zooms. 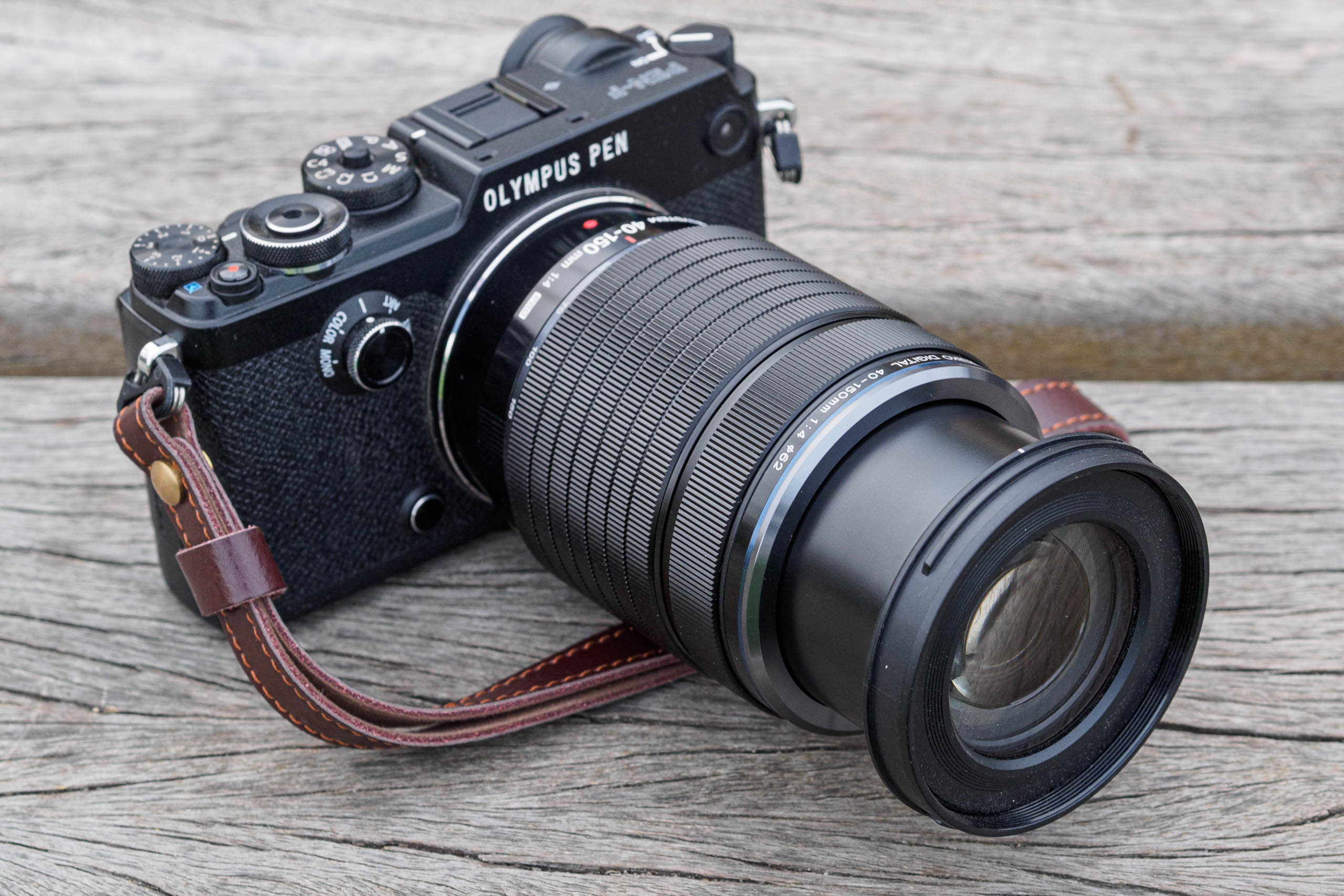