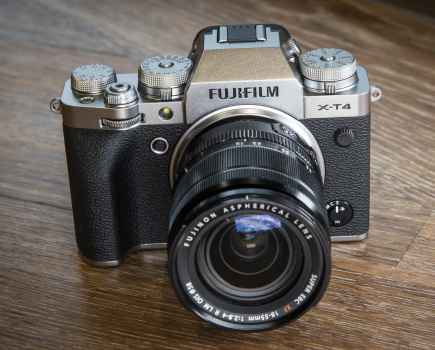 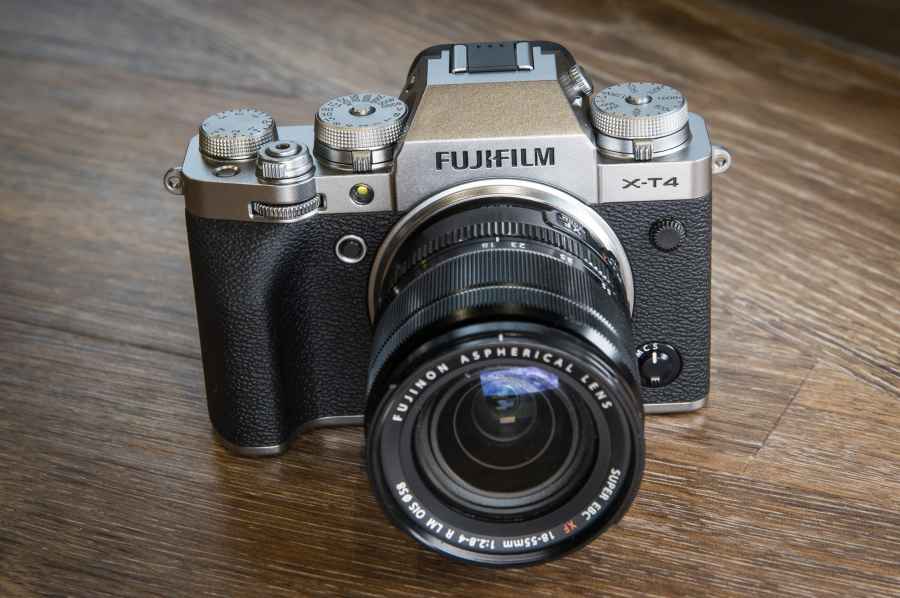 Fujifilm X-T4: At a Glance 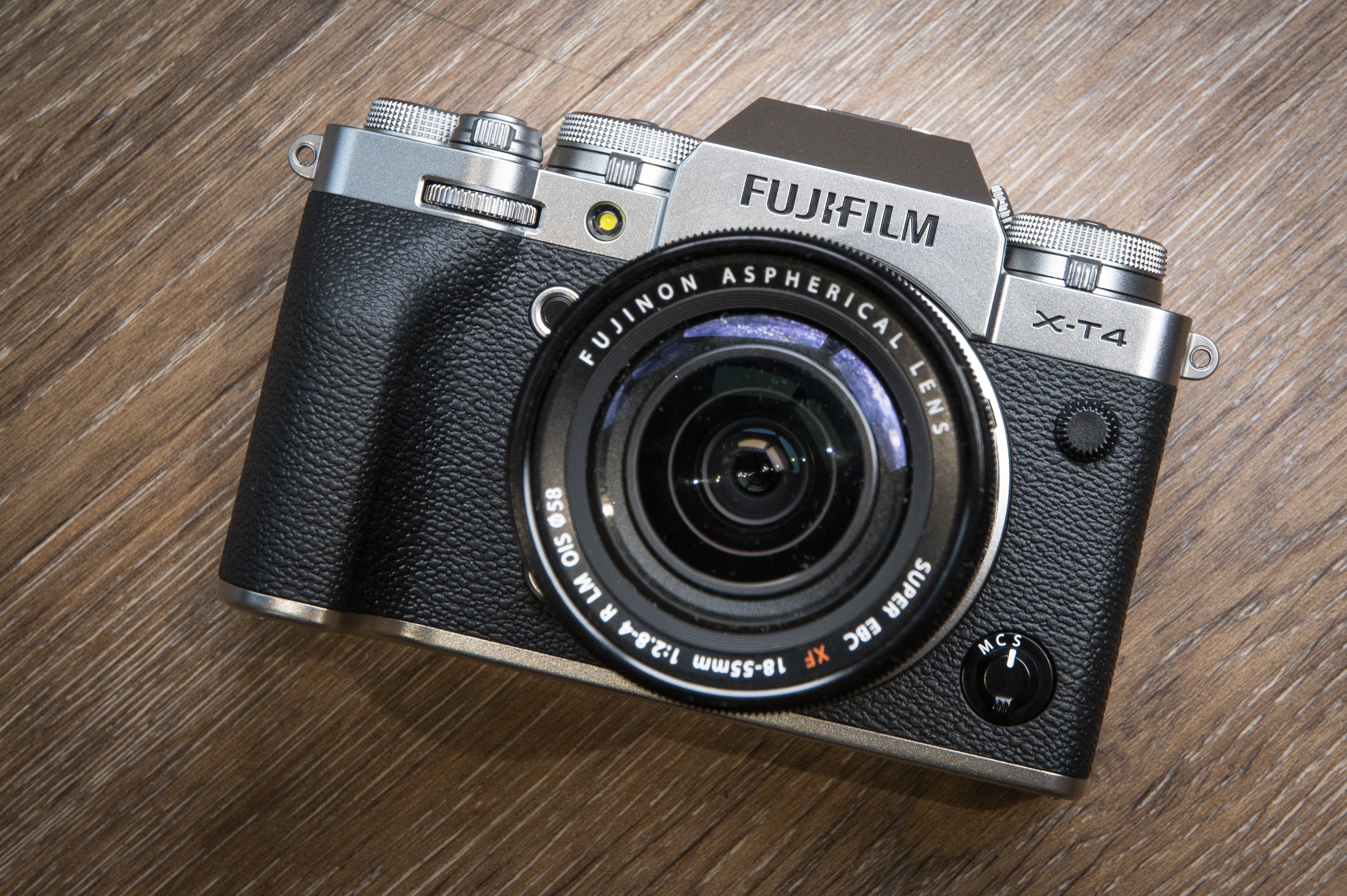 Fujifilm’s single-digit X-T series models have long been favourites of serious photographers, thanks to their enviable combination of superb image quality, robust weather-sealed construction and intuitive dial-led handling. Indeed in most respects the current X-T3 is one of the finest APS-C cameras on the market. About the only significant point against it is a lack of in-body image stabilisation (IBIS), which is increasingly being appreciated as invaluable for stills and video shooters alike. Fujifilm introduced IBIS two years ago on the X-H1, but its bulkier body never won quite the same acclaim. 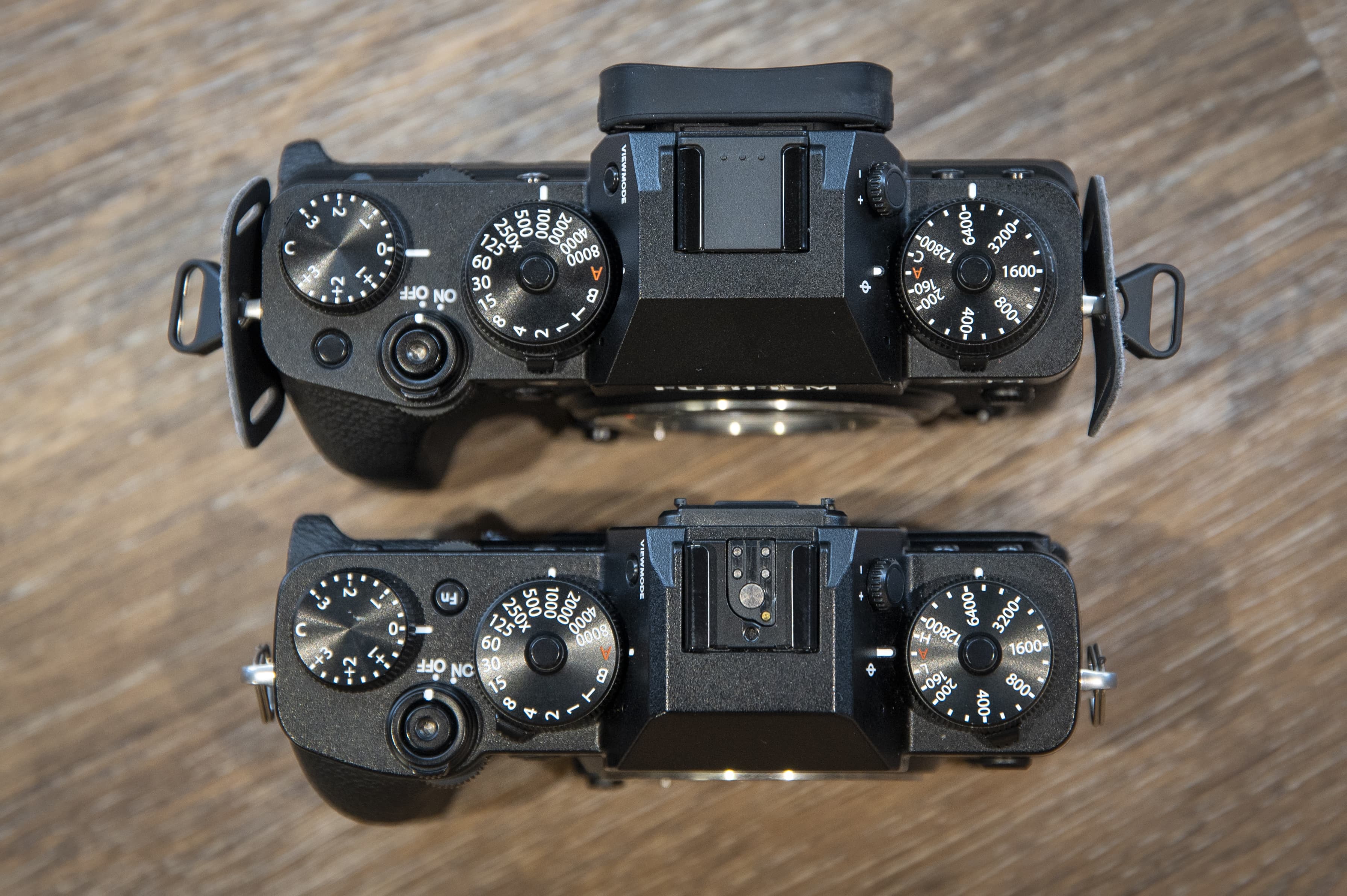 Enter the X-T4. This new model takes most of the features that have made the X-T3 so popular, but adds 5-axis IBIS without dramatically increasing in size. Indeed it’s just 2mm wider, 5mm thicker and 68g heavier than its predecessor, which is a small price to pay for gaining a claimed 6.5 stops of stabilisation when using Fujifilm’s wide range of non-OIS lenses.

Optically stabilised lenses can still be used, of course, with the OIS correcting angular shake as usual, and the IBIS taking responsibility for rotation around the lens axis, along with up/down and left/right movements. With OIS lenses Fujifilm specifies between 5 and 6.5 stops overall stabilisation, equating to an increase of up to a stop over the lenses alone. 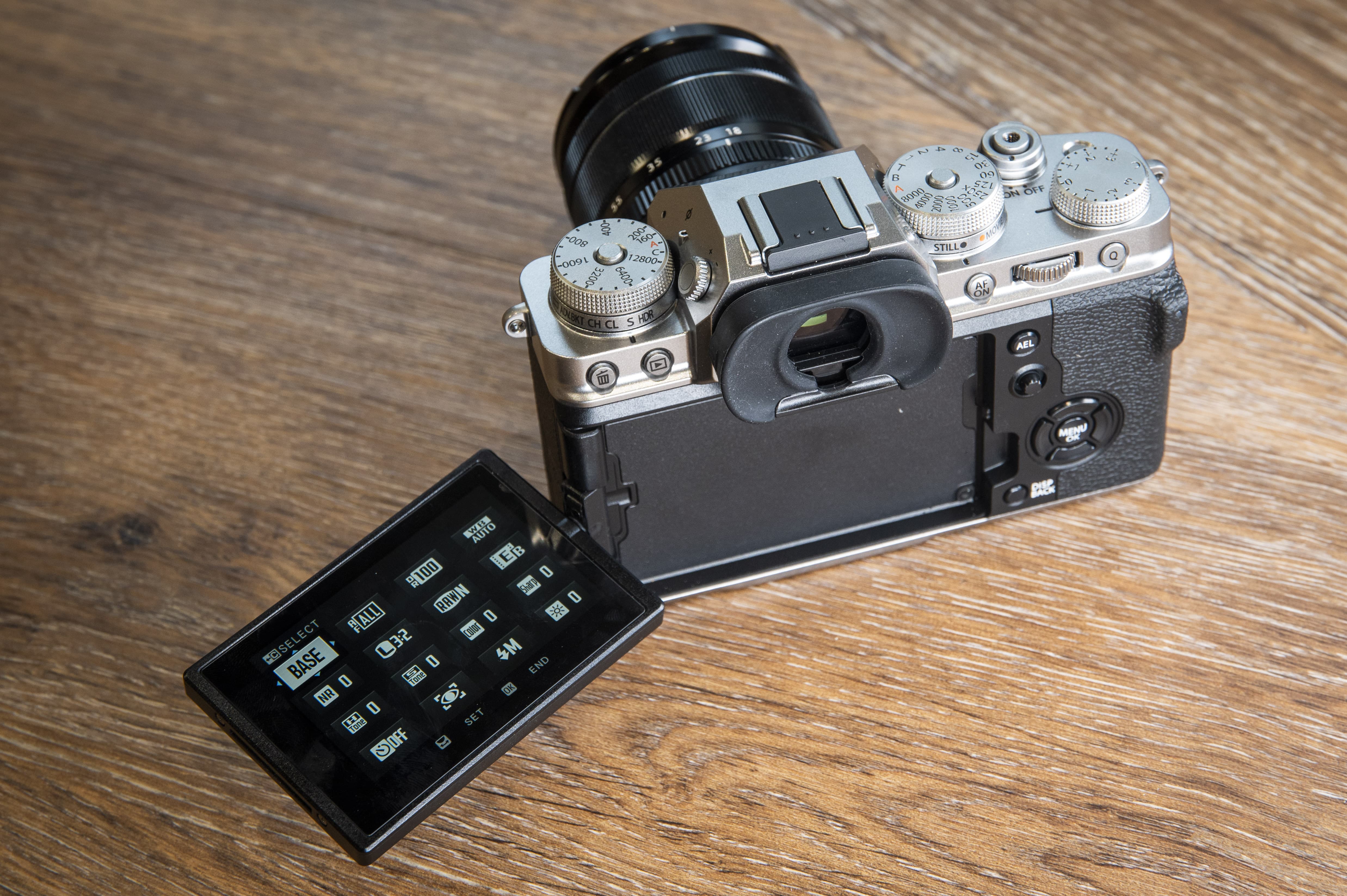 Fujifilm’s second big change is unlikely to be as universally welcomed, because the X-T4 has adopted a fully articulated side-hinged screen. This has the advantage of offering a broader range of angles, and in particular can be set to face forwards for selfies or video work, or folded in against the camera back for protection when it’s not in use. However it’s slower to use than the X-T3’s triple-hinged rear LCD, and is likely to be incompatible with the L-brackets favoured by many tripod users. 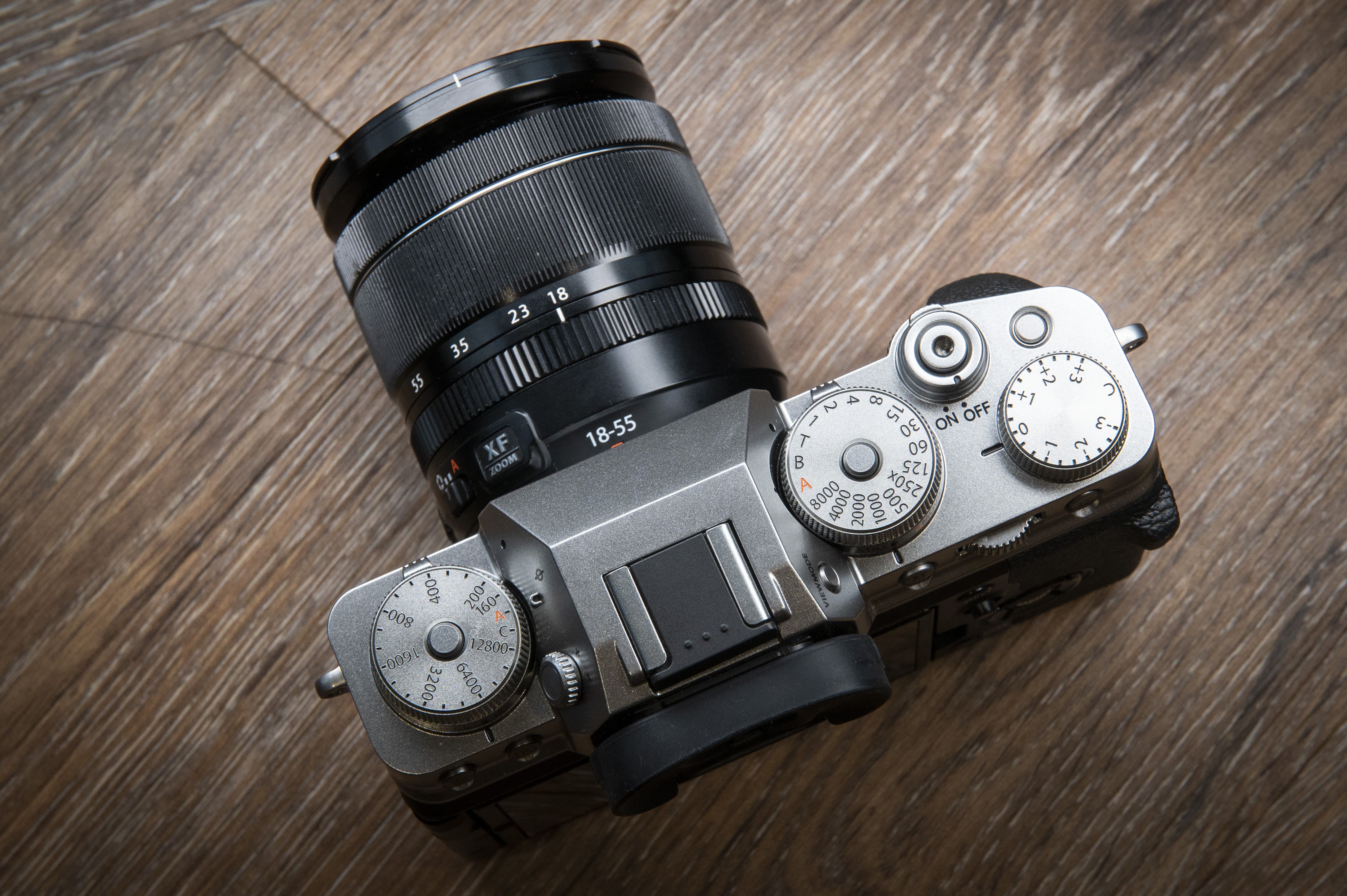 Like its predecessors, the X-T4 sports an array of top-plate controls

Another key update is a new mechanical shutter that offers continuous shooting at up to 15 frames per second, which Fujifilm claims is the fastest of any mirrorless camera. It’s rated to 300,000 actuations and is super-quiet, with 30% lower operational noise compared to the X-T3. The firm says that updated AF algorithms and a rapid 0.02sec focus acquisition time should keep pace with the quicker frame rate, while face and eye detection and subject tracking have also been improved. 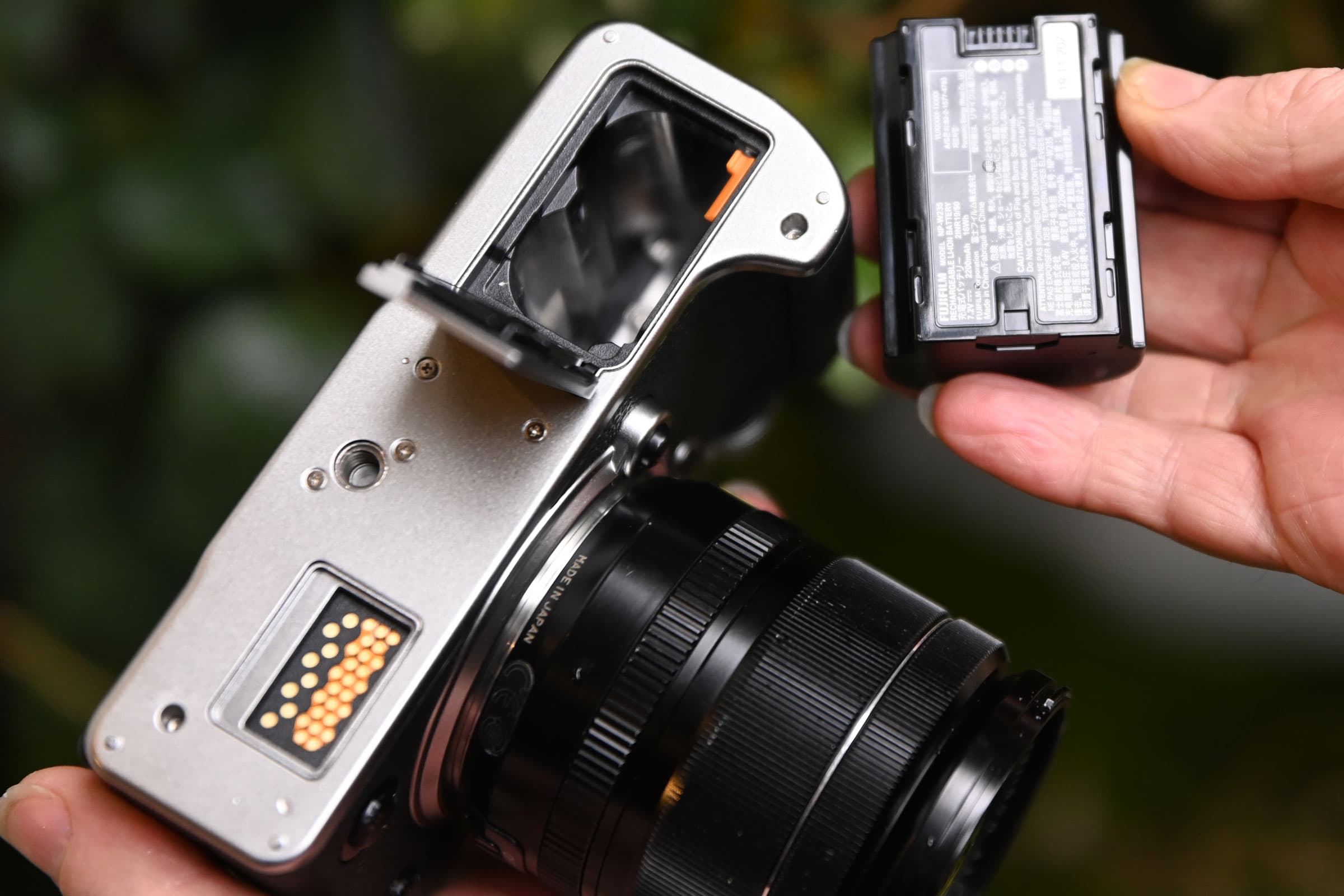 The X-T4 also gets a new, higher-capacity battery, with the 2200 mAh NP-W235 providing an impressive 500 shots per charge. The battery can be charged via the USB-C port in approximately three hours using a 3A (or higher) supply. It’ll still charge from lower-power USB outputs and powerbanks, but naturally this will take longer. Users who’d like to purchase extra NP-W235 batteries can do so for £65 each, and Fujifilm will also produce a dual battery charger capable of charging two NP-W235 batteries at the same time, which will cost £60. 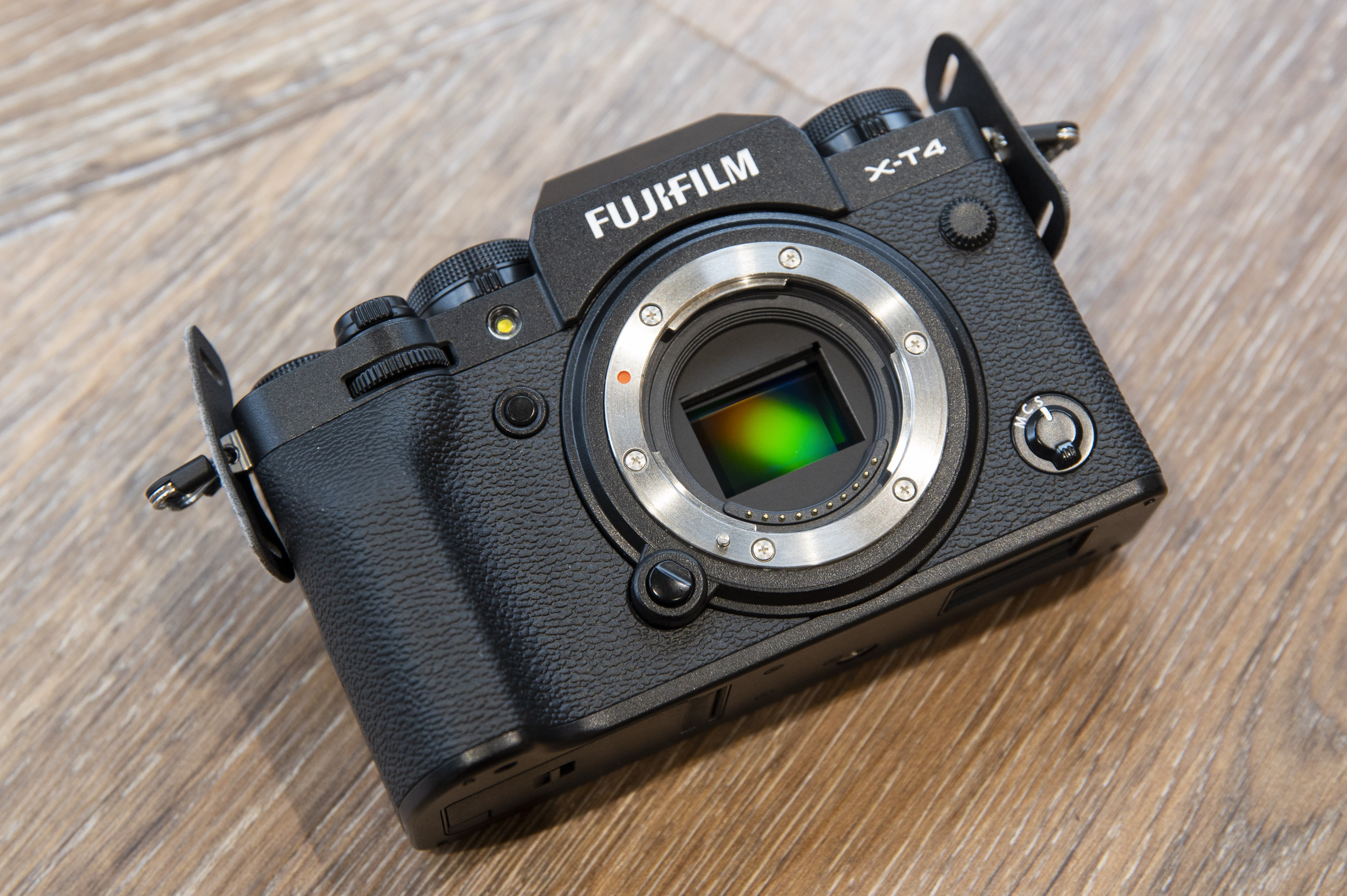 In imaging terms, through, the X-T4 offers no upgrade over the X-T3. It employs the same 26.1MP X-Trans CMOS 4 sensor and X-Processor 4, and offers the same sensitivity range of ISO 160-12800, extendable to ISO 80-51200. But this is still one of the best APS-C sensors you can get, complemented by Fujifilm’s excellent film simulation colour modes.

Broadly speaking, the new model looks very similar to its predecessors, meaning that it’s an SLR-shaped camera with an array of dials and switches on the top plate for changing exposure and operational settings. But Fujifilm hasn’t stood entirely still in terms of body design, with a number of tweaks and updates in a bid to improve operability. 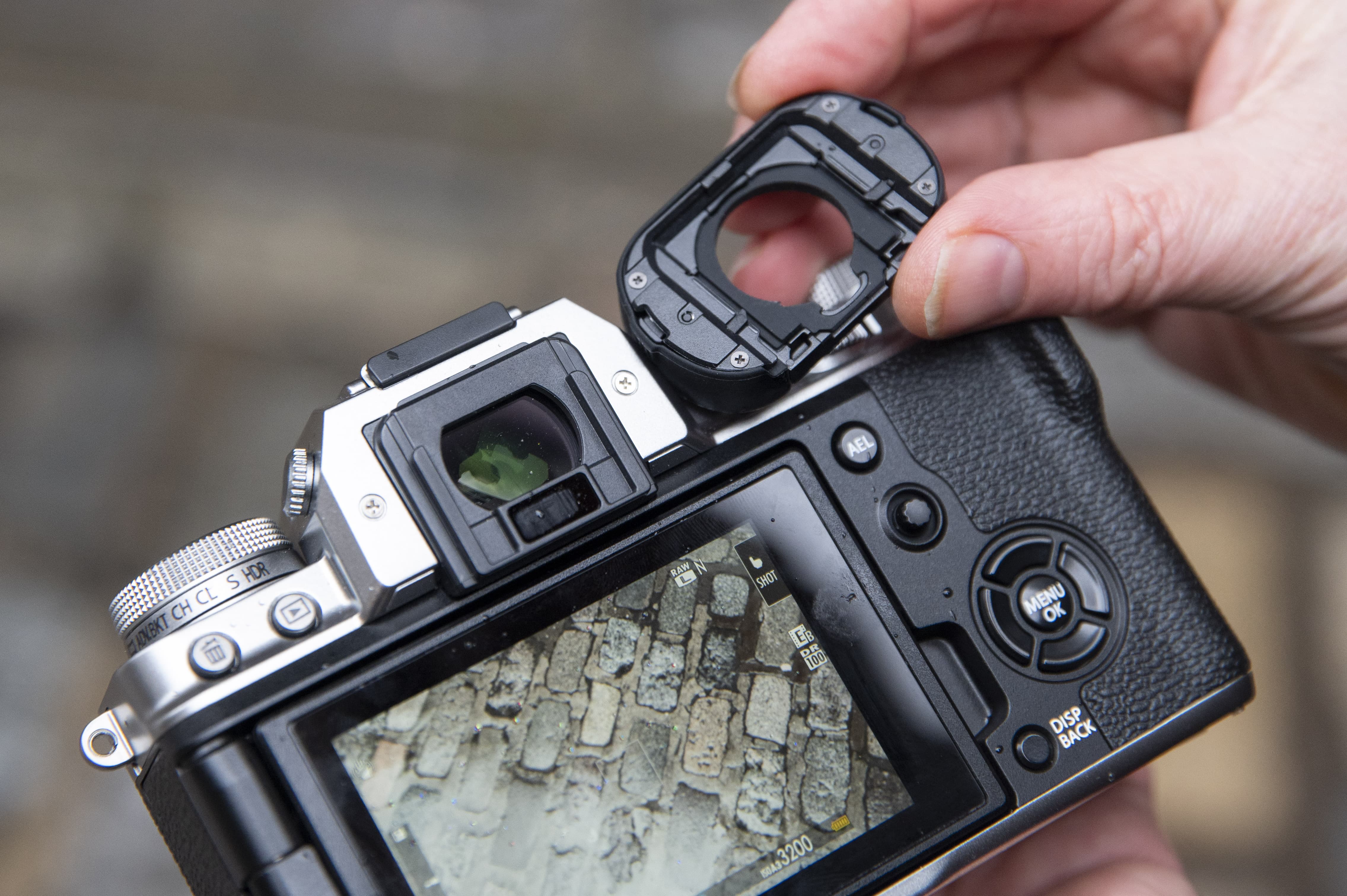 The eyepiece now has to be squeezed from the sides to remove it, making it less likely to get knocked off.

The three buttons on the upper back have moved around, with the net effect of providing a large, easier-to-reach AF-ON button beside the viewfinder. The switch below the shutter speed dial no longer controls the metering mode, but instead selects between stills and video shooting. It’s a move that’s sure to irritate some purist photographers, but reflects the X-T line’s ever increasing maturity as a video tool.

The X-T4 promises to be just as capable at recording video as at shooting stills, offering both 4K recording at 60fps, and high-speed Full HD at 240fps. Flicking the switch to the Video position activates an optimised user interface that includes a movie-specific onscreen quick menu, along with entirely independent shooting settings. In this regard the camera can be instructed to ignore the positions of its control dials, allowing users to change settings silently using the touchscreen instead. There’s a new Eterna Bleach Bypass Film Simulation mode too, which gives a high-contrast, desaturated look. 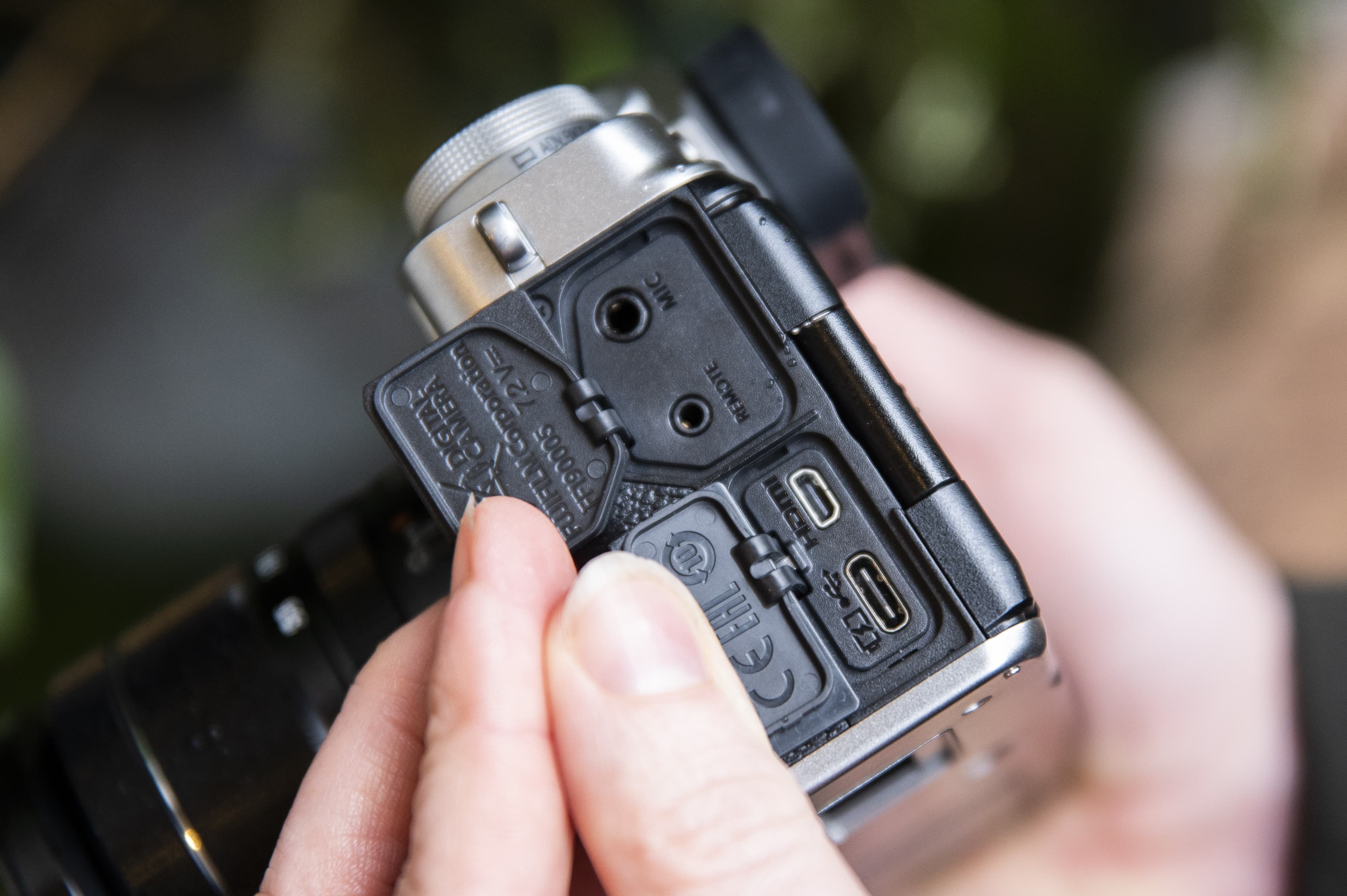 Video files can be recorded to both of the camera’s SD card slots simultaneously, and the card compartment cover can even be removed to facilitate use in a cage. A microphone socket is built-in, positioned just beyond the screen’s arc of movement, meaning that mics with slimline jacks might not impede its rotation. There’s no headphone socket, but a USB-C to 3.5mm adapter is supplied in the box for those who’d like to monitor audio when the battery grip isn’t used.

To accommodate the X-T4’s larger footprint and bigger battery, Fujifilm has designed an all-new vertical battery grip, the VBG-XT4. It secures beneath the camera via the tripod thread and offers improvements to both handling and performance. Built to the same robust, weather resistant standard as the camera’s body, it accommodates two additional NP-W235 batteries that work in conjunction with the battery that’s already loaded in the camera to provide up to 1,450 frames before a recharge is required. 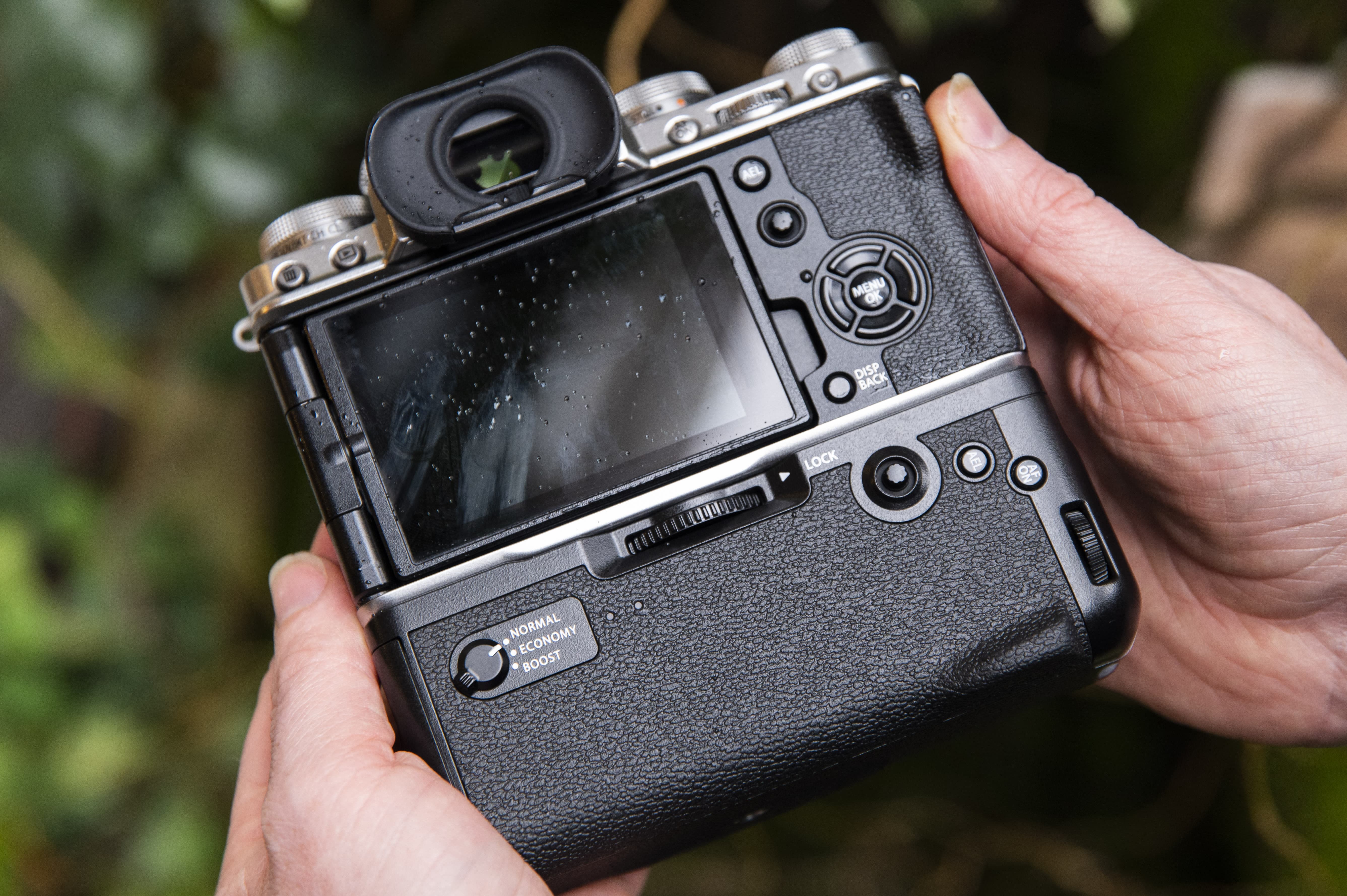 The battery grip includes a set of portrait-format controls

Unlike the X-T3’s grip, all three batteries can be now be recharged simultaneously via the USB Type-C port at the side of the camera, meaning the grip no longer requires its own power adapter. The time it takes to recharge all three batteries is dependent on the power supply used, however with the camera plugged in to a 45W or above output, recharging is claimed to be as quick as three hours. 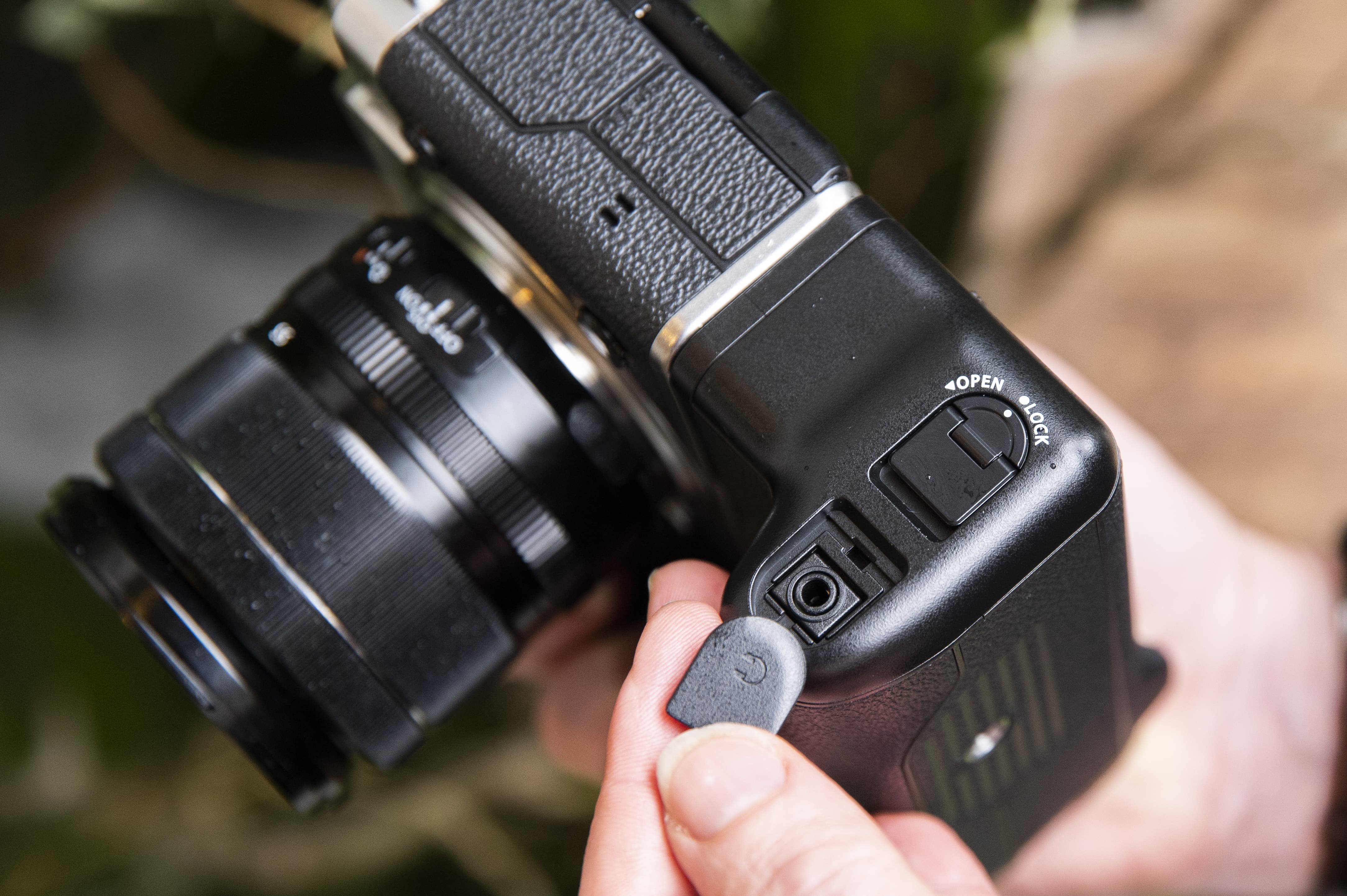 A 3.5mm headphone socket is built into the vertical grip

There’s a new performance switch that provides the option to select economy, as well as the usual normal and boost settings, and users also benefit from a dedicated headphone socket. The grip includes front and rear electronic dials and and AF-point selection joystick, along with AF-ON, AE-L and Q buttons, but their layout is very different from the camera’s landscape-format controls. The VGB-XT4 will be sold separately for £299. 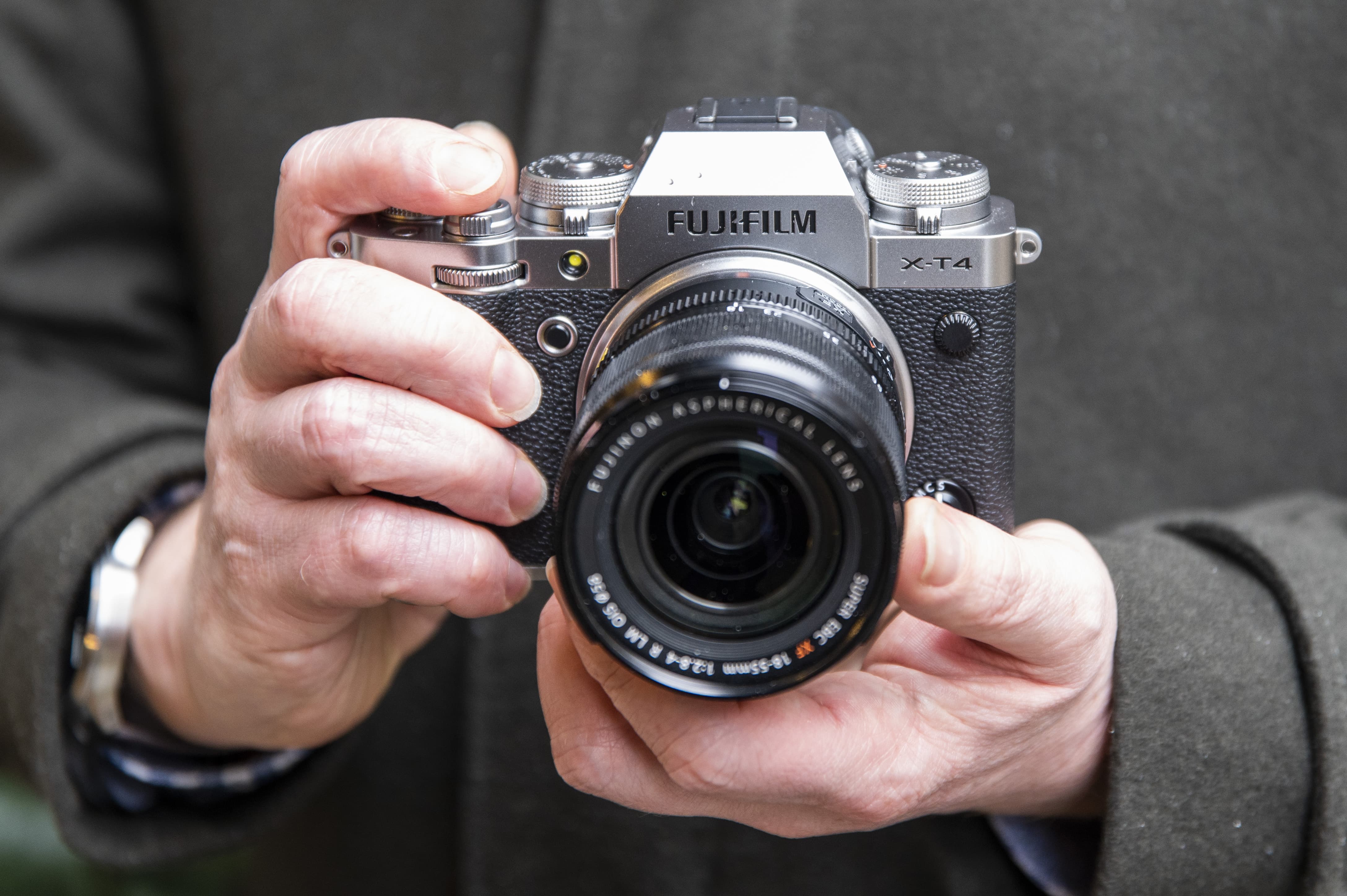 Despite being fractionally larger then its predecessors, the X-T4 feels great in your hands

Fujifilm says that the X-T3 doesn’t replace the X-T3 outright, with the older model remaining on sale for those who prefer its blend of features. Interestingly the firm is also stressing that this isn’t the end of the X-H line, with a new iteration on the cards in future.

With the X-T3 already being one of our favourite cameras, the addition of IBIS naturally has us very excited indeed. In fact if Fujifilm had just done that and no more, we’d probably be even happier. But a few contentious design decisions, most notably the side-hinged LCD, bring some pause for thought. In the AP office, the majority of us would have preferred the existing screen design. 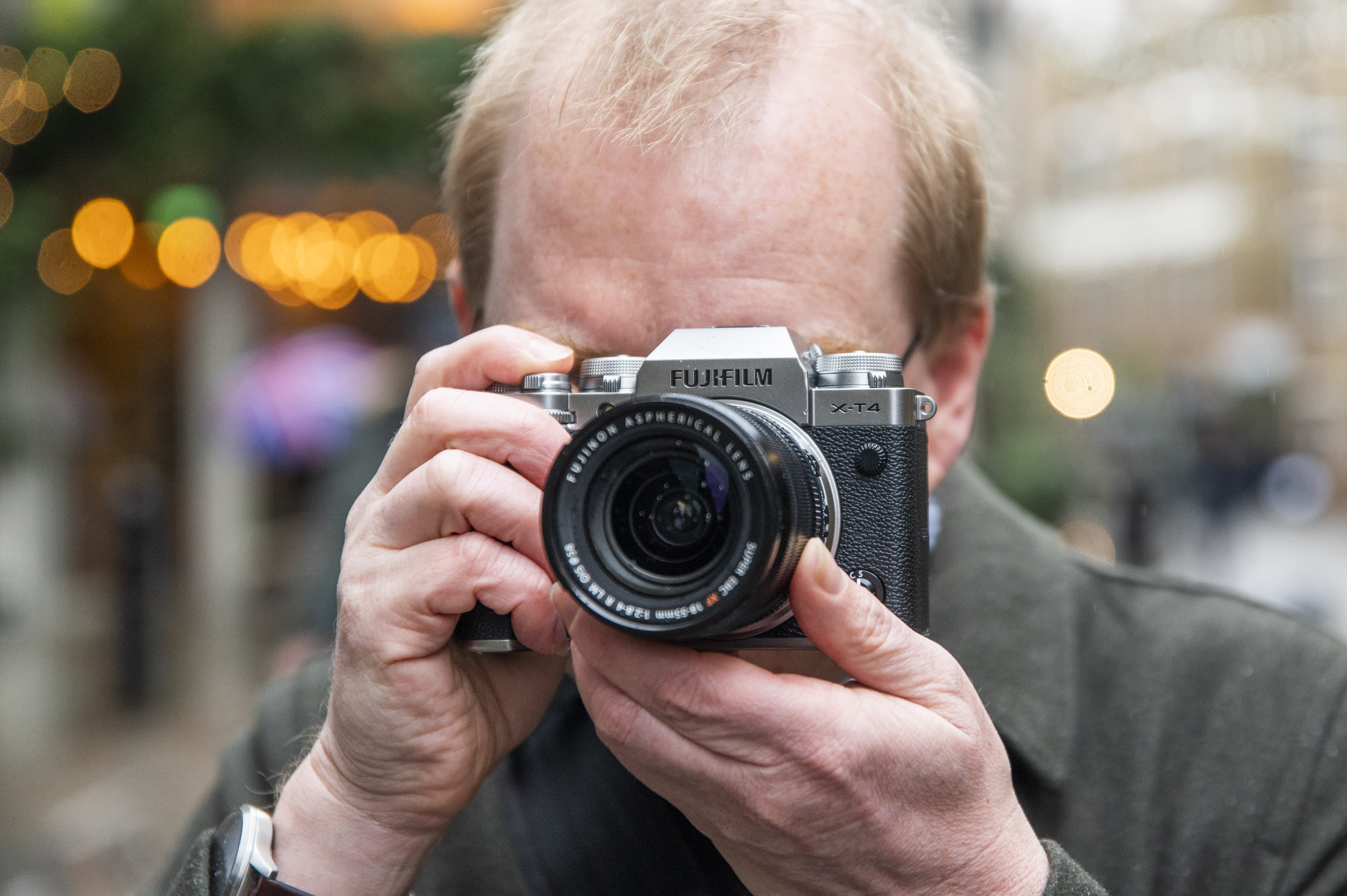 That said, the X-T4 looks like it’ll be a fantastic update that will surely become the new class-leader among crop-sensor cameras. It’ll certainly provide stiff competition to the likes of the Sony Alpha 6600 and Olympus OM-D E-M1 Mark III. The bad news is that we’ll have to wait a while to try it out properly, but as ever we’ll bring you a full review the moment we can lay our hands on one.