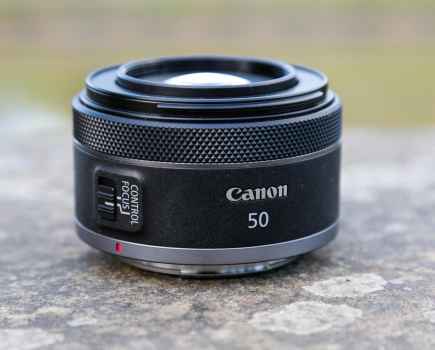 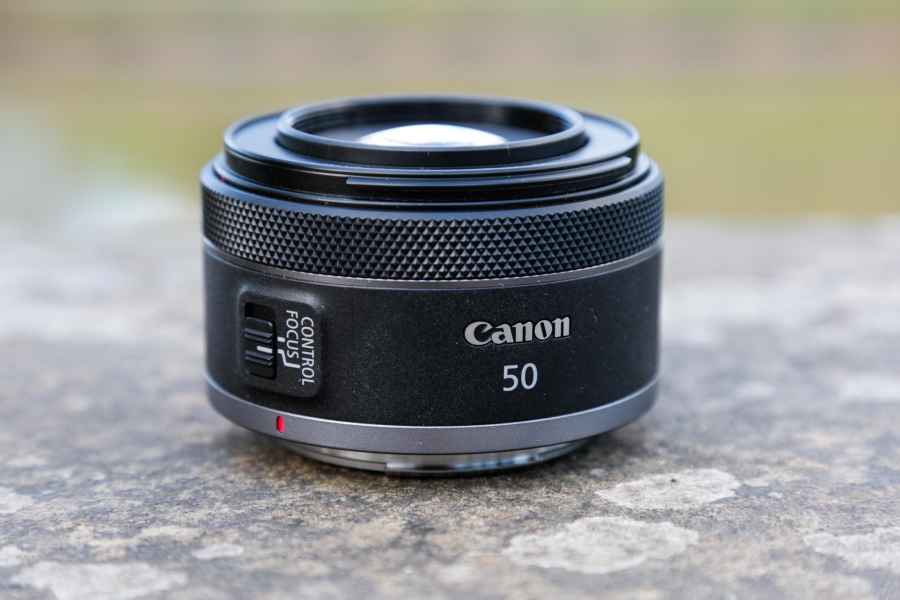 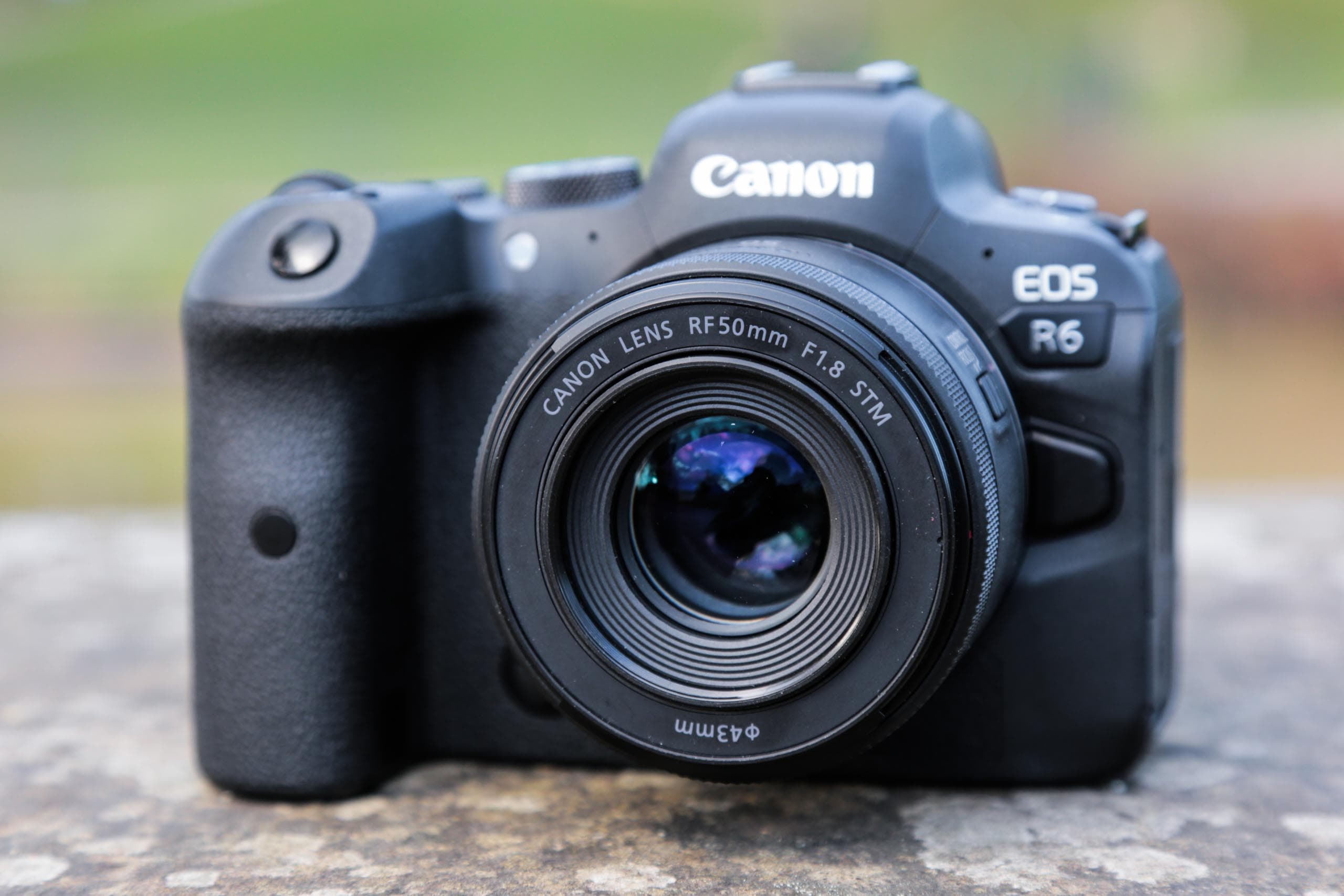 In this review we’re looking at the Canon RF 50mm F1.8 STM and we’ll begin by taking a closer look at how this RF-mount lens differs to Canon’s existing and affordable standard primes in EF-mount. 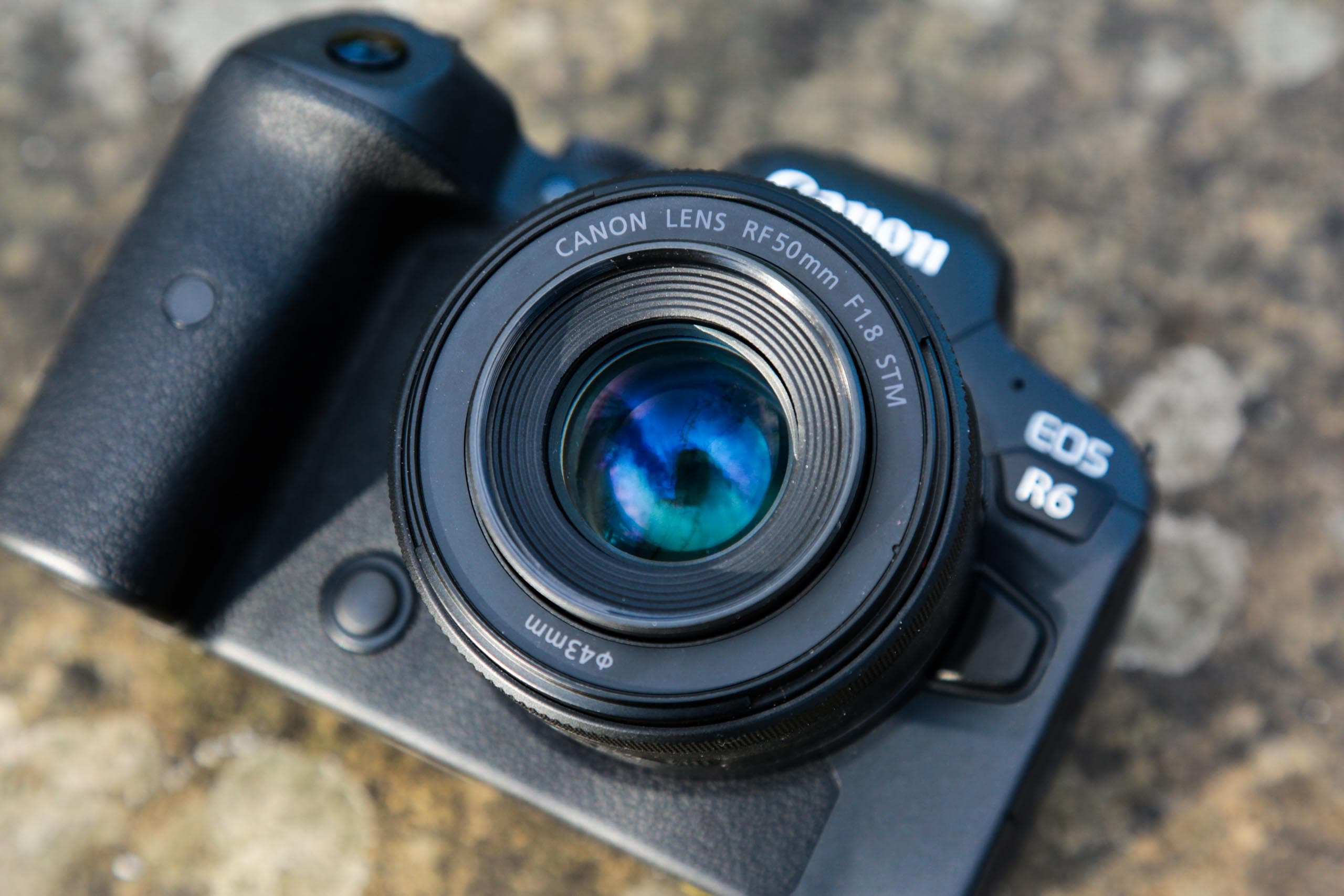 It shares the same arrangement of 6 elements in 5 groups as the EF 50mm F1.8 STM, but adds a new aspherical lens element. The inclusion of this element is important as it’s alleged to reduce aberrations across the frame and contribute to superior sharpness from the centre to the edge. 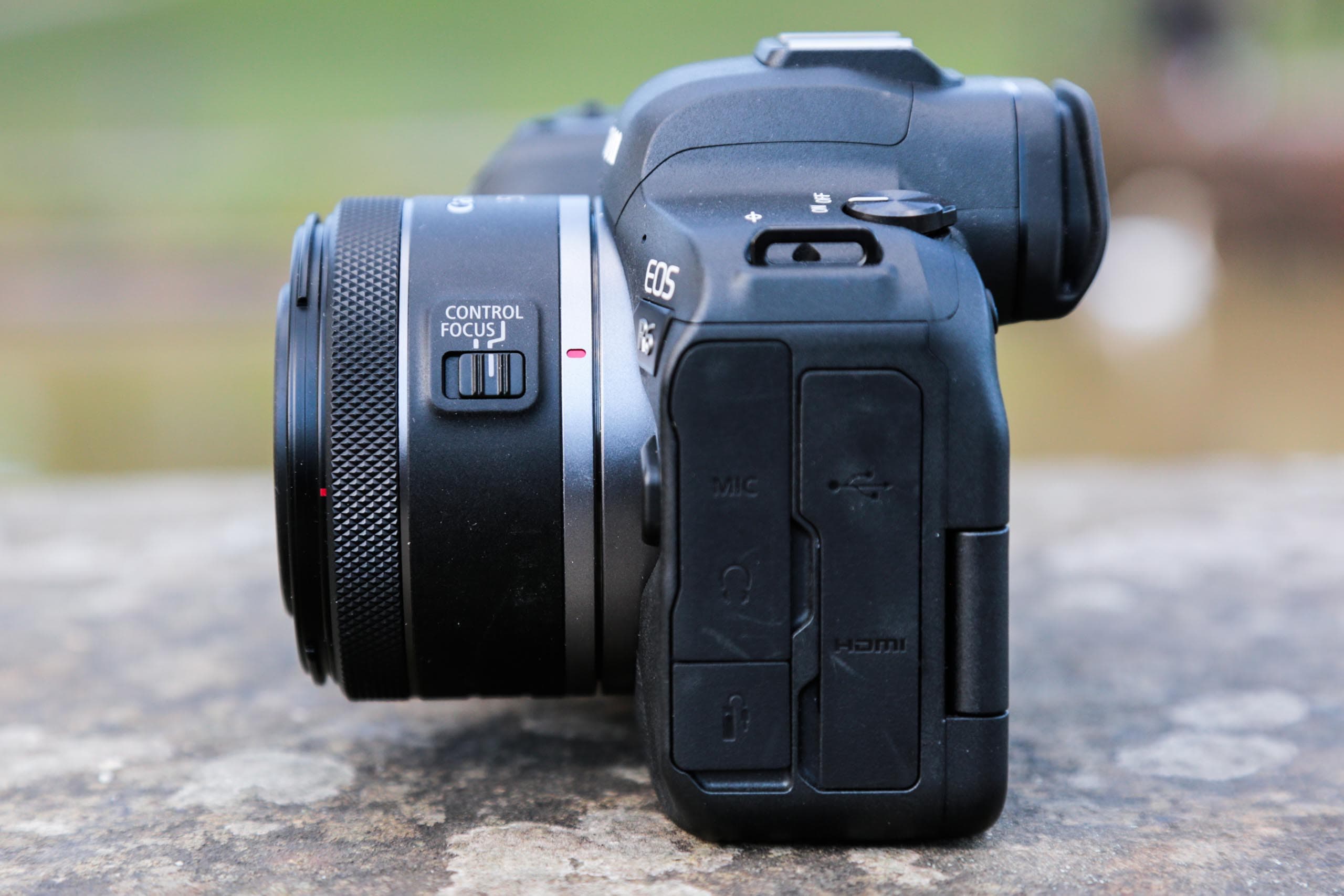 Canon’s Super Spectra coating is also claimed to play its part in improving image quality and colour rendering. Again, just like its EF-mount predecessor, it’s equipped with 7 diaphragm blades and has a minimum aperture of f/22. 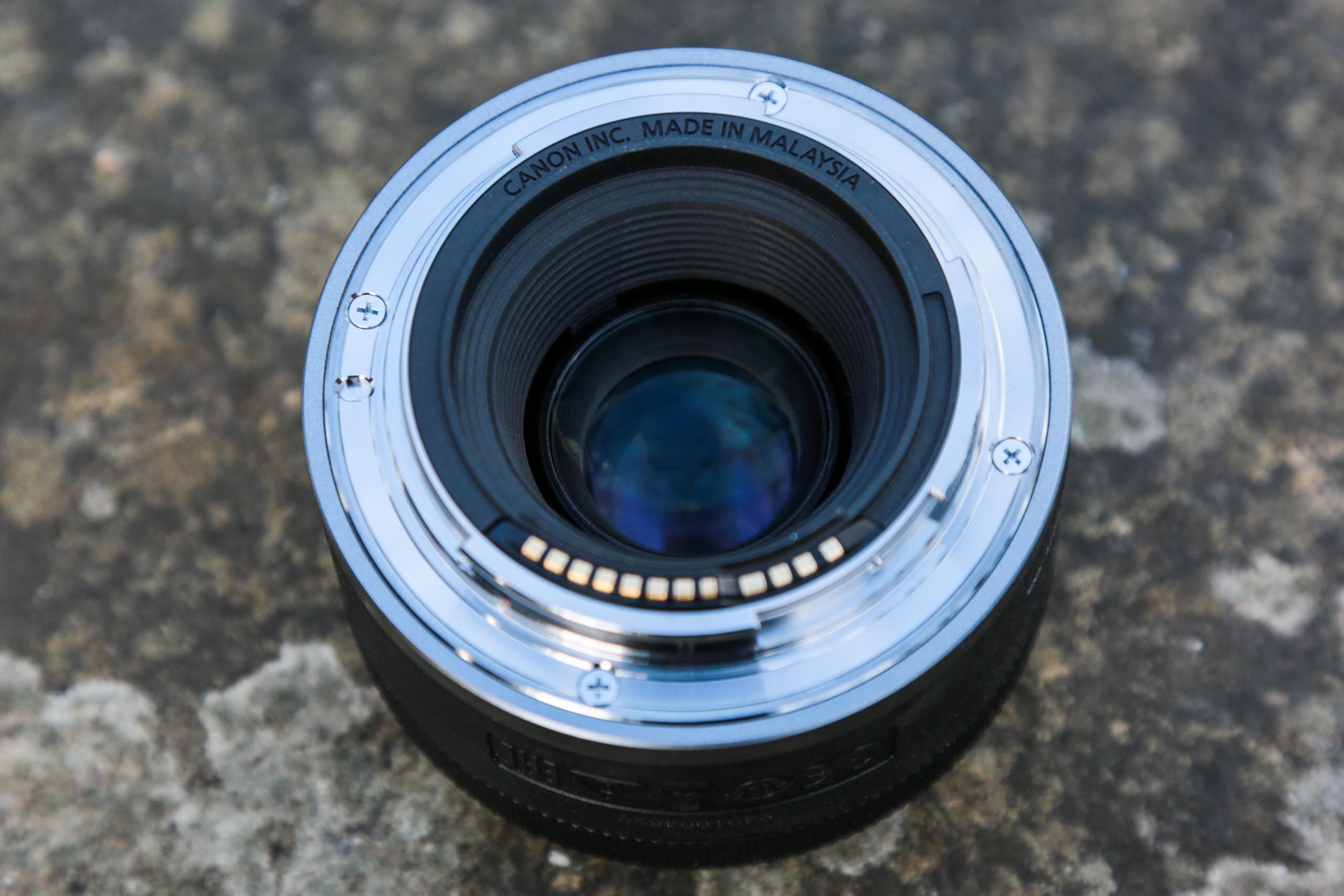 The STM abbreviation reveals it’s equipped with a stepping motor (STM) to drive autofocus and keep operation quiet. Canon has used this motor technology across many of its lenses since 2012, including the EF 50mm f1.8 STM, and I’ll touch on this in more detail in the autofocus section of this review. 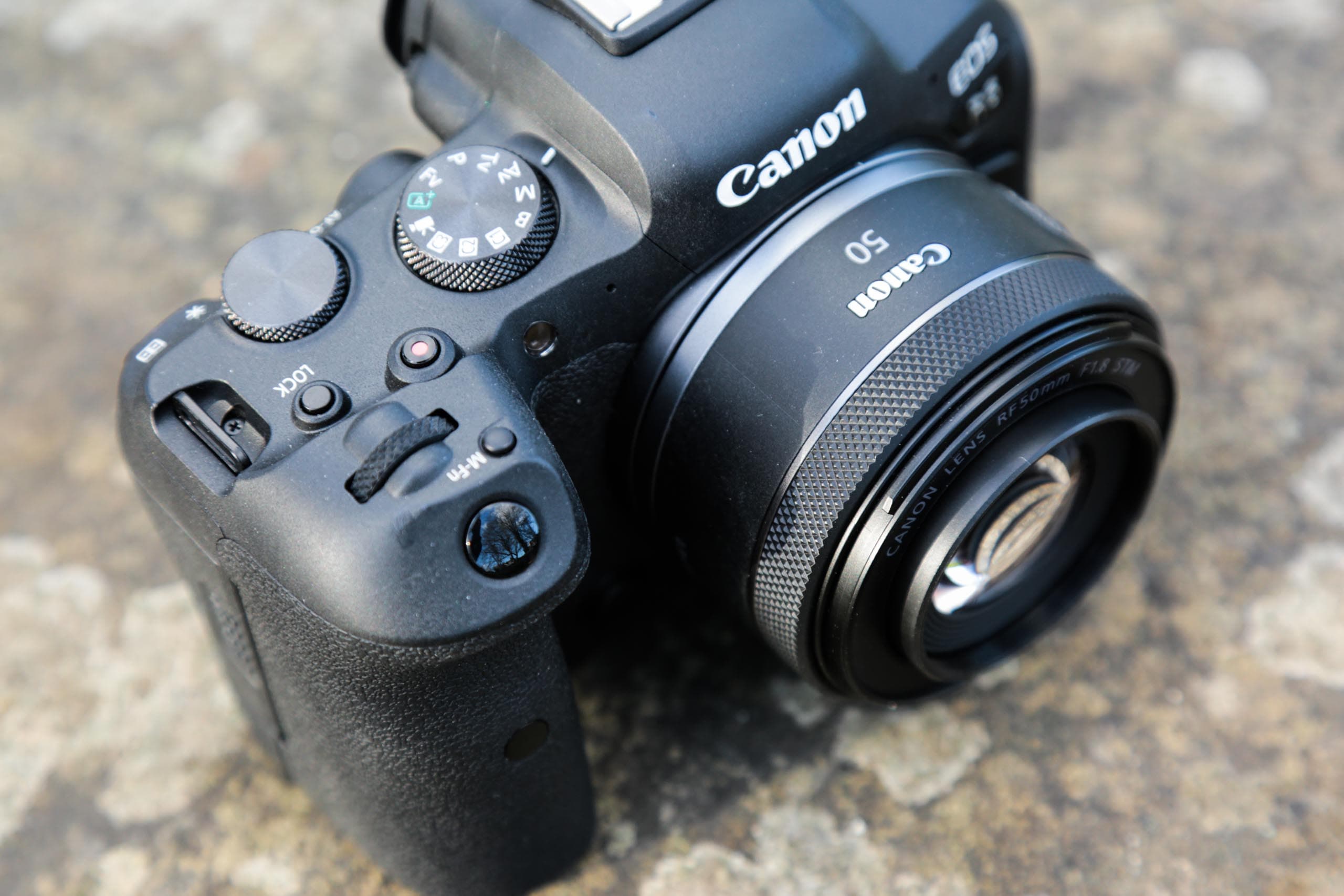 Although it’s a budget lens, it doesn’t feel out of place mounted to Canon’s premium EOS R cameras like the EOS R6 that it was tested with

Optical image stabilisation isn’t featured and as things stand, only the EOS R5 and EOS R6 provide in-body image stabilization (IBIS). Users of the EOS R and EOS RP who intend to use the lens handheld but don’t have the luxury of IBIS to fall back on will want to be vigilant of camera shake when dropping the shutter speed down to 1/50sec, or below. 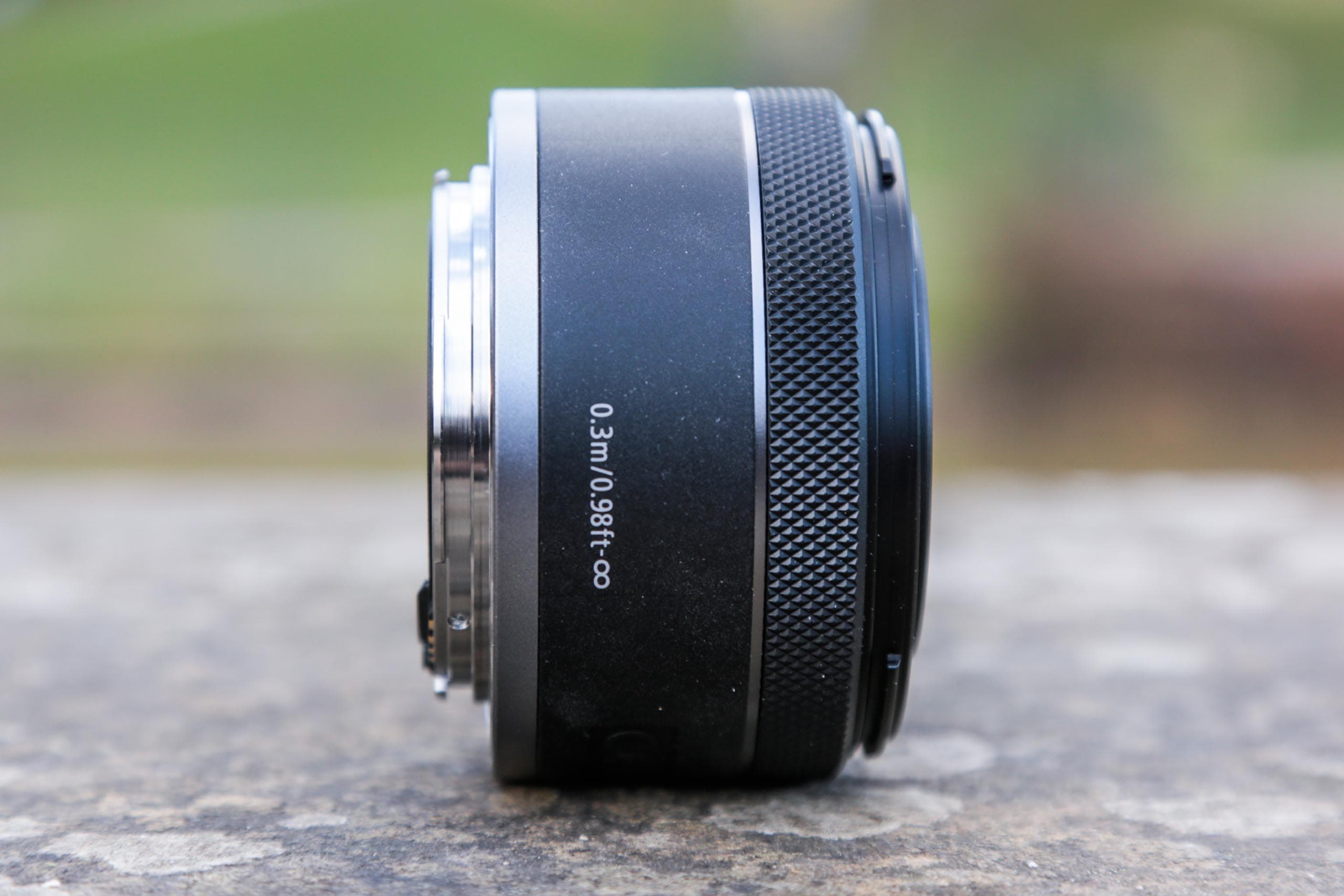 Users are reminded of the minimum focus distance (0.3m/0.98ft) on the underside of the barrel

Its minimum focusing distance (30cm) is a small improvement over the EF 50mm f1.8 STM that focuses within 35cm. Filters and adapters are mounted via a 49mm thread at the front, but if you’re one for frequently shooting towards the light and would like to reduce the amount of lens flare in your shots, you’ll want to budget an additional £22 for Canon’s ES-65B hood that isn’t included in the box. 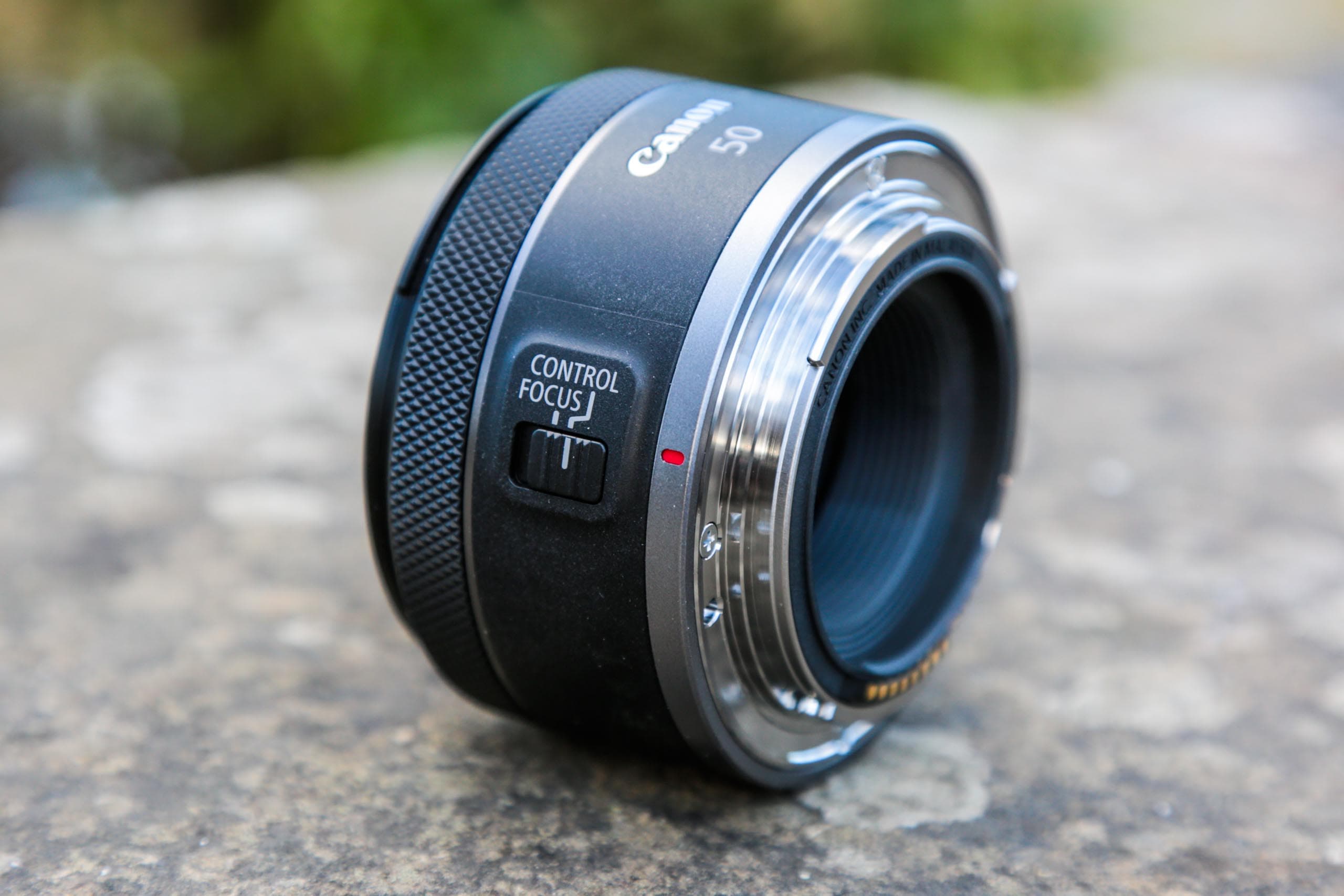 The finish is marginally better than the EF 50mm f1.8 STM, with the knurled focus ring offering improved grip and the silver ring around the lens mount complimenting the attractive mount on EOS R camera bodies. 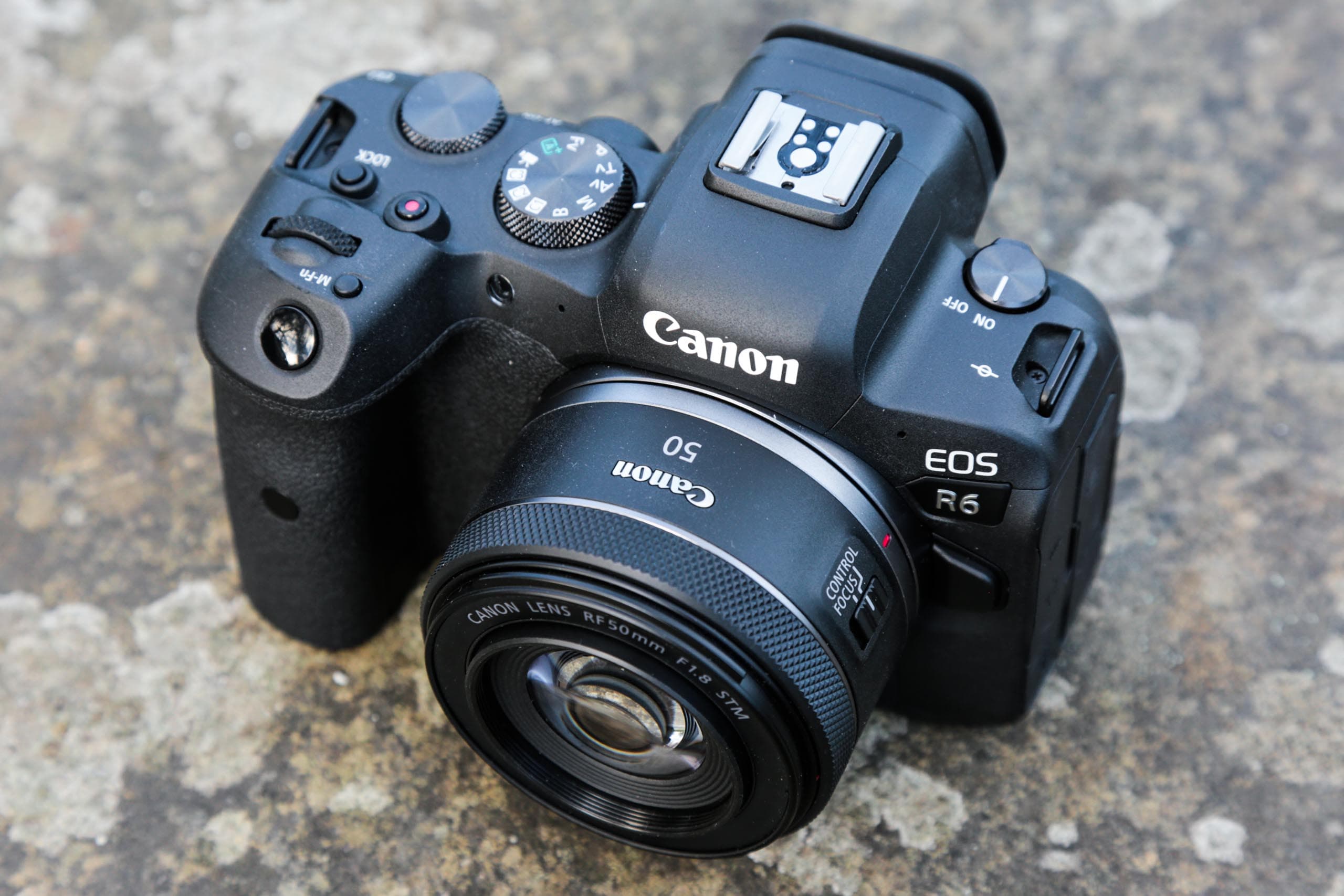 At only 69.2mm in length, the lens is extremely compact. This combination of EOS R6 and RF 50mm F1.8 STM weighs a respectable 840g

Canon’s decision to exclude an AF/MF switch and replace it with a Focus/Control switch forces users to head into the camera’s main menu to change focus mode. With the Focus/Control switch set to focus, the focus ring, which is fairly thin, behaves like a normal manual focus ring and rotates fluidly with no hard stops. 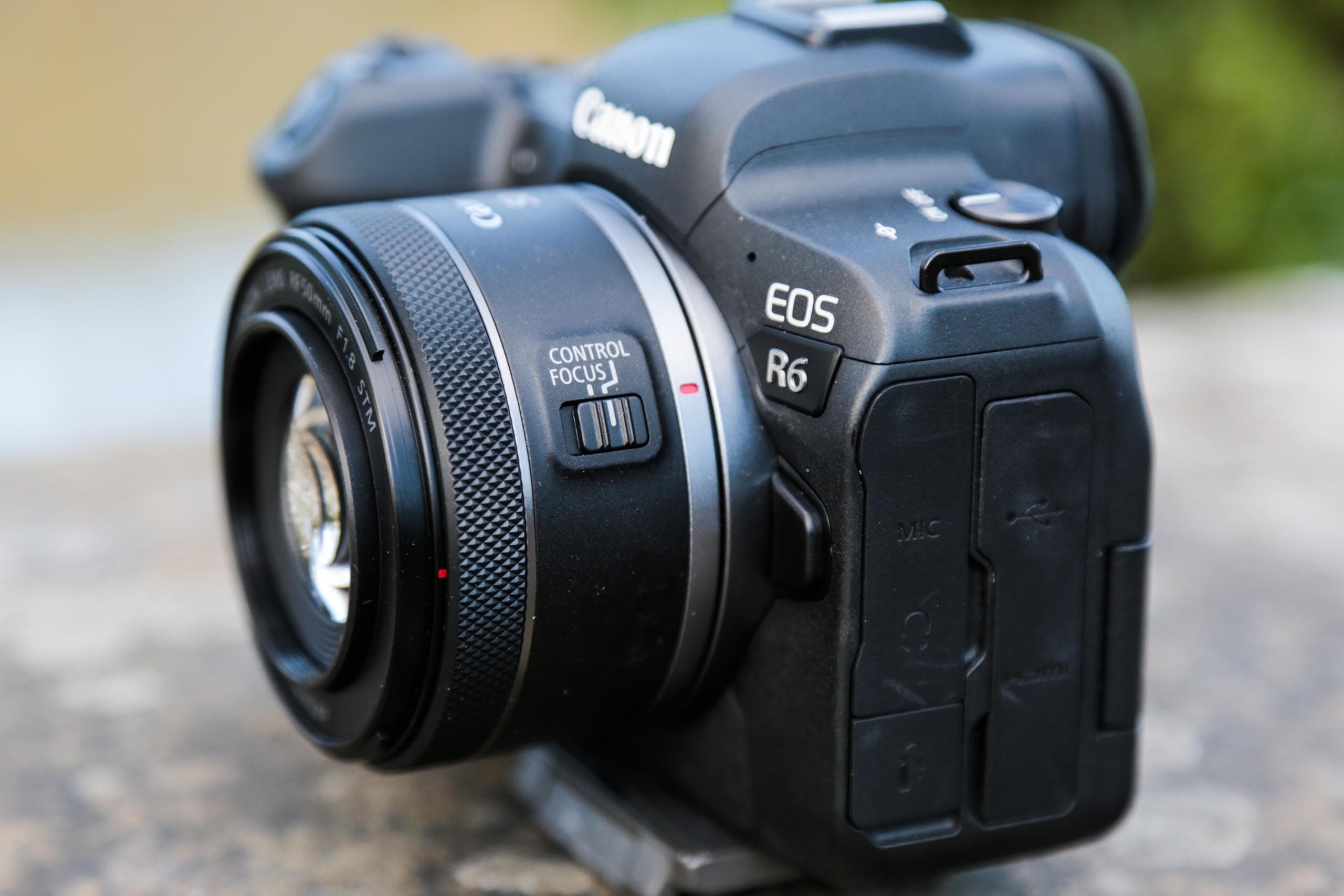 Flick the Focus/Control switch to control and it turns into a customisable control ring that can be used to change exposure variables, the AF mode, picture style or white balance. This can be done directly or by holding the exposure lock button to avoid unintentional changes. 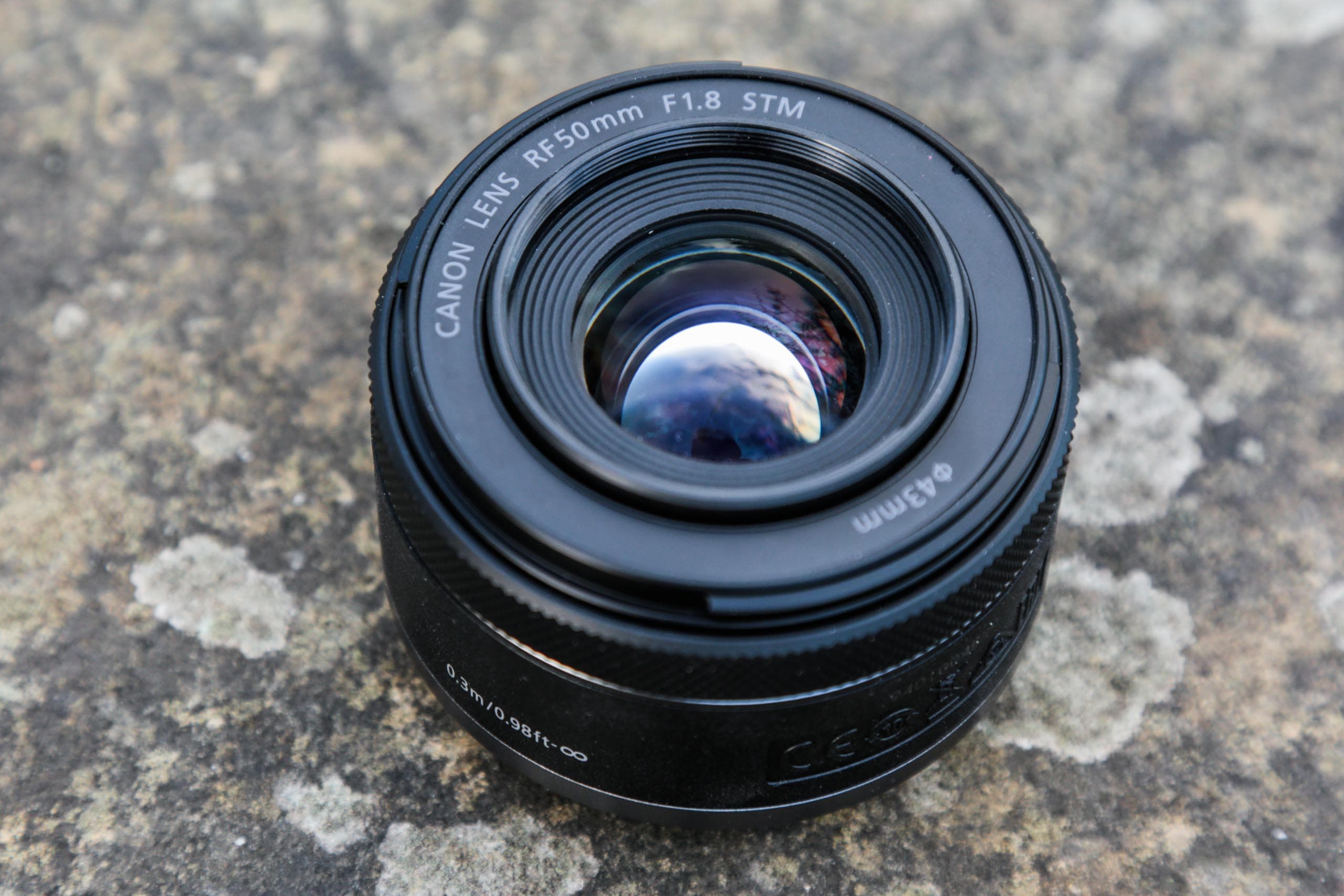 The lens features a construction of 6 elements in 5 groups, which includes a new aspherical element

In terms of size, it’s a lovely and compact lens that won’t weigh you down. It’s ideal for times when you’d like to get creative with depth of field on your travels, or when you’d simply like a small, lightweight lens to walkabout with. 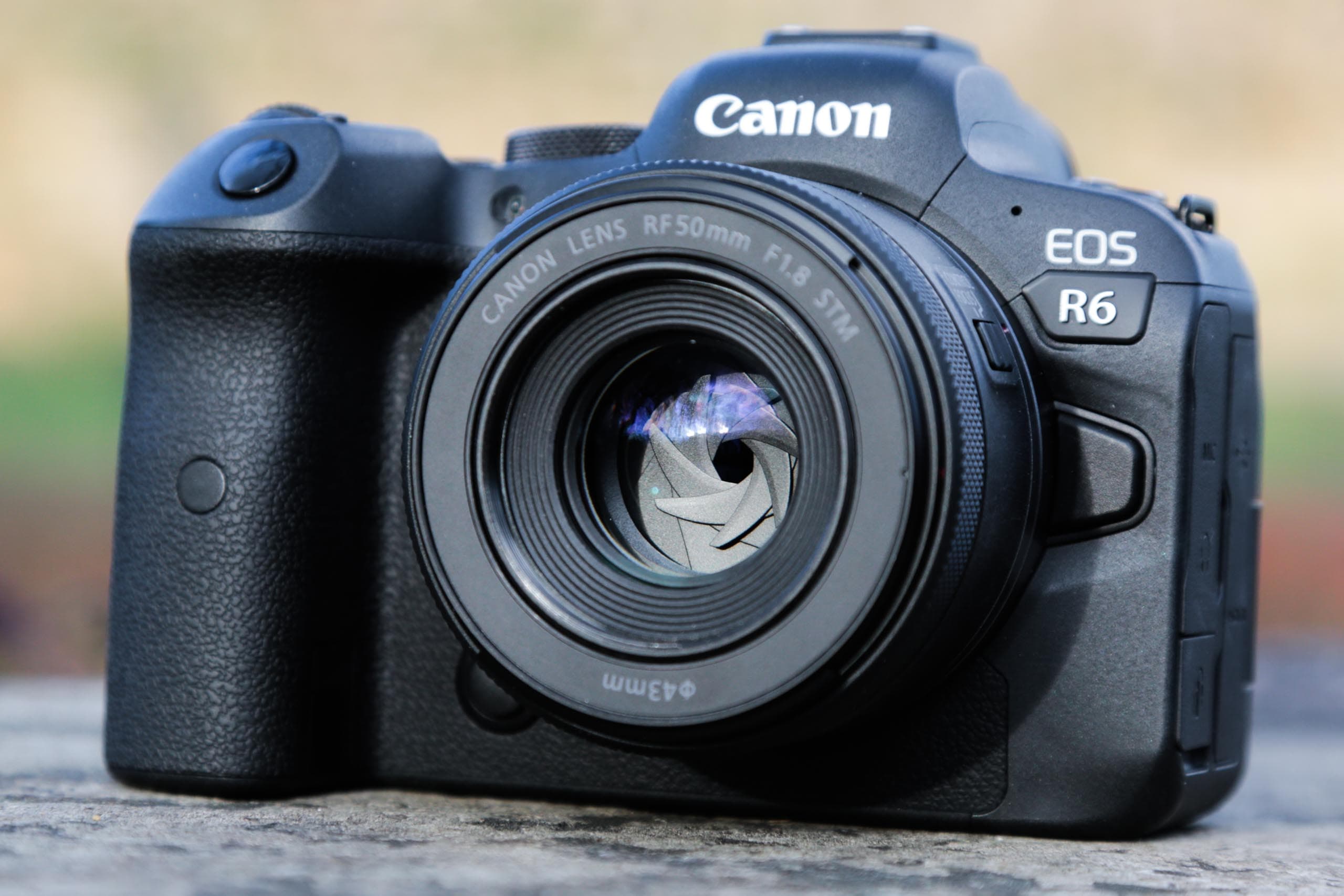 It’s smaller and lighter than using the EF version with one of Canon’s EF-EOS R mount adapters too, but it should be noted that focusing isn’t accomplished through the movement of internal lens elements, meaning the front element does extend and increase in length the closer you shoot to subjects.

Given its compact size, the lens employs Canon’s gear type of STM that uses helical gears to drive the focus rather than the physically larger lead-screw type of STM. As I discovered during testing, the lens produces some low level residual noise as it autofocuses, however it’s only really noticeable when you’re shooting in quiet indoor environments like an empty church and couldn’t be traced in audio recorded outdoors where ambient sound is usually loud enough to cancel it out. 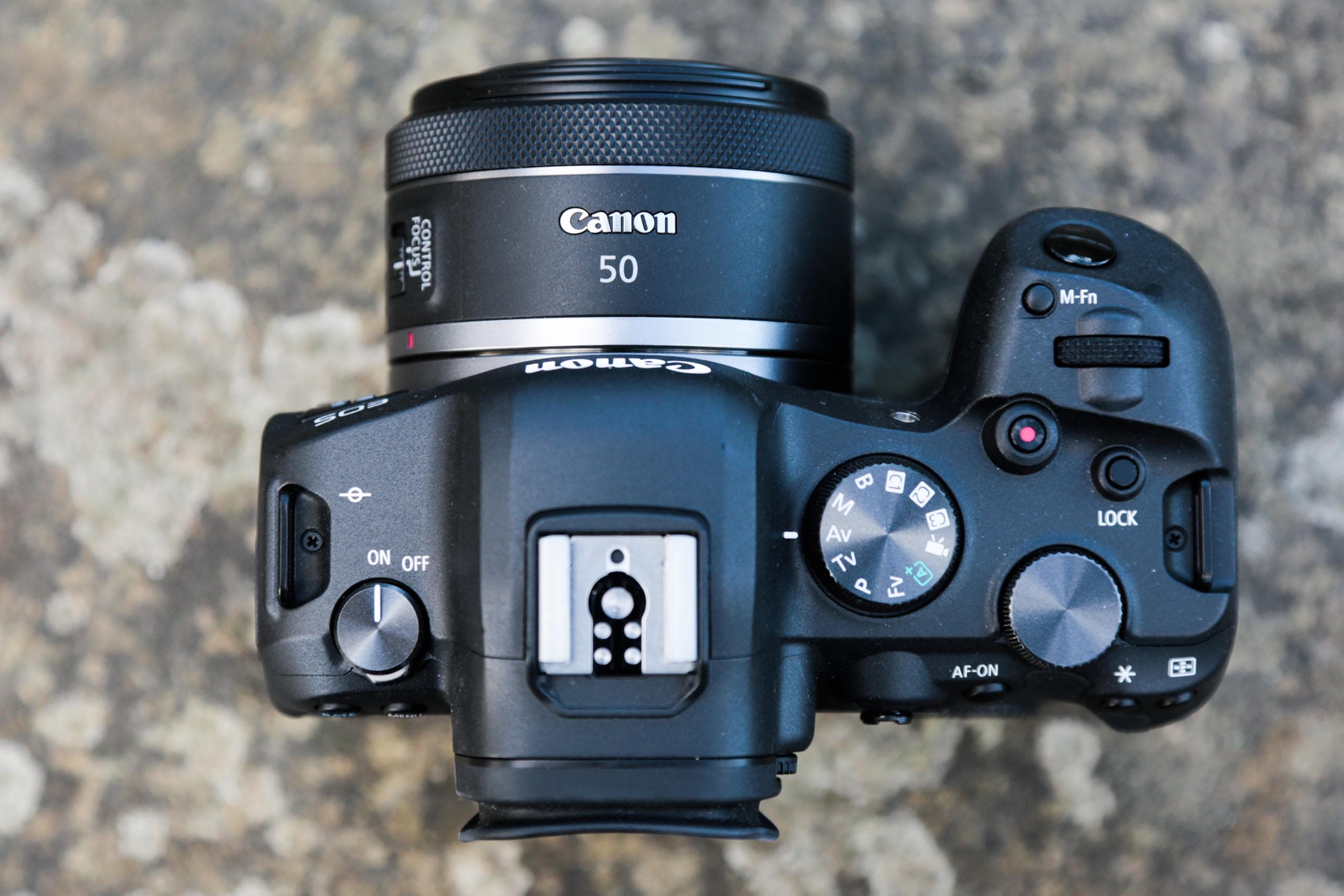 Entering manual focus and twisting the focus ring emits a hum that gets louder the faster it’s rotated. Manual focus is the fly-by-wire type and I found there to be only a small amount of lag between twisting the focus ring and the lens responding. Although it isn’t as fast to focus as Canon lenses that use the lead-screw type of STM, it’s not what I’d describe as slow to acquire focus. I only observed signs of hunting when I asked it to focus close to its minimum focusing distance in very gloomy lighting conditions.

With the lens not yet supported by a lens profile in Adobe Camera Raw or Lightroom Classic at the time of testing, my analysis of its optical performance was based on lens aberration corrections being turned on in-camera and no profile being applied in software. 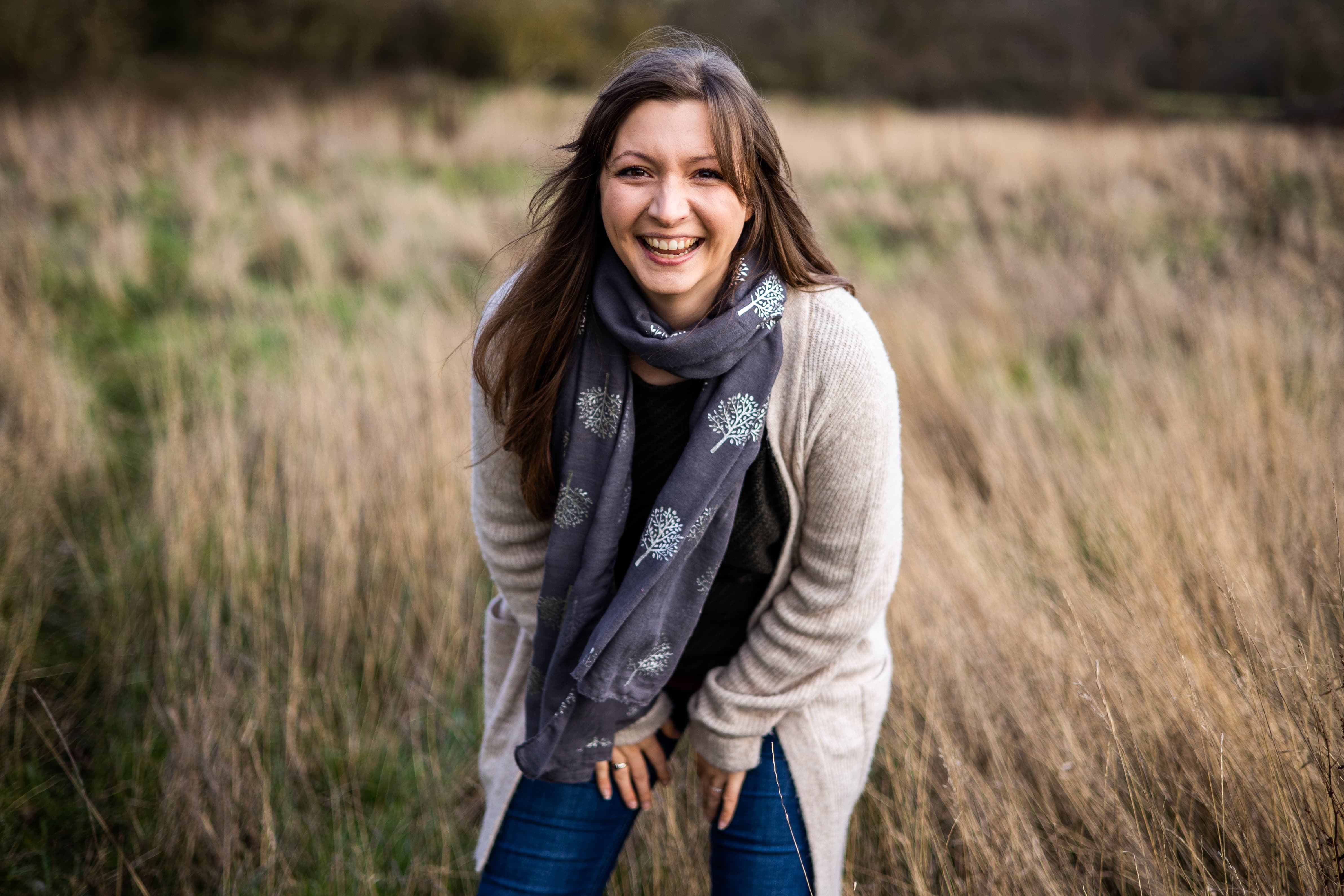 Centre sharpness at f/1.8 exceeds expectations for a lens that costs £219, however you’ll notice that sharpness at the periphery of the frame drops off considerably. Stopping down to f/2 or f/2.8 has no major impact on centre sharpness, but edge sharpness is perceivably better. 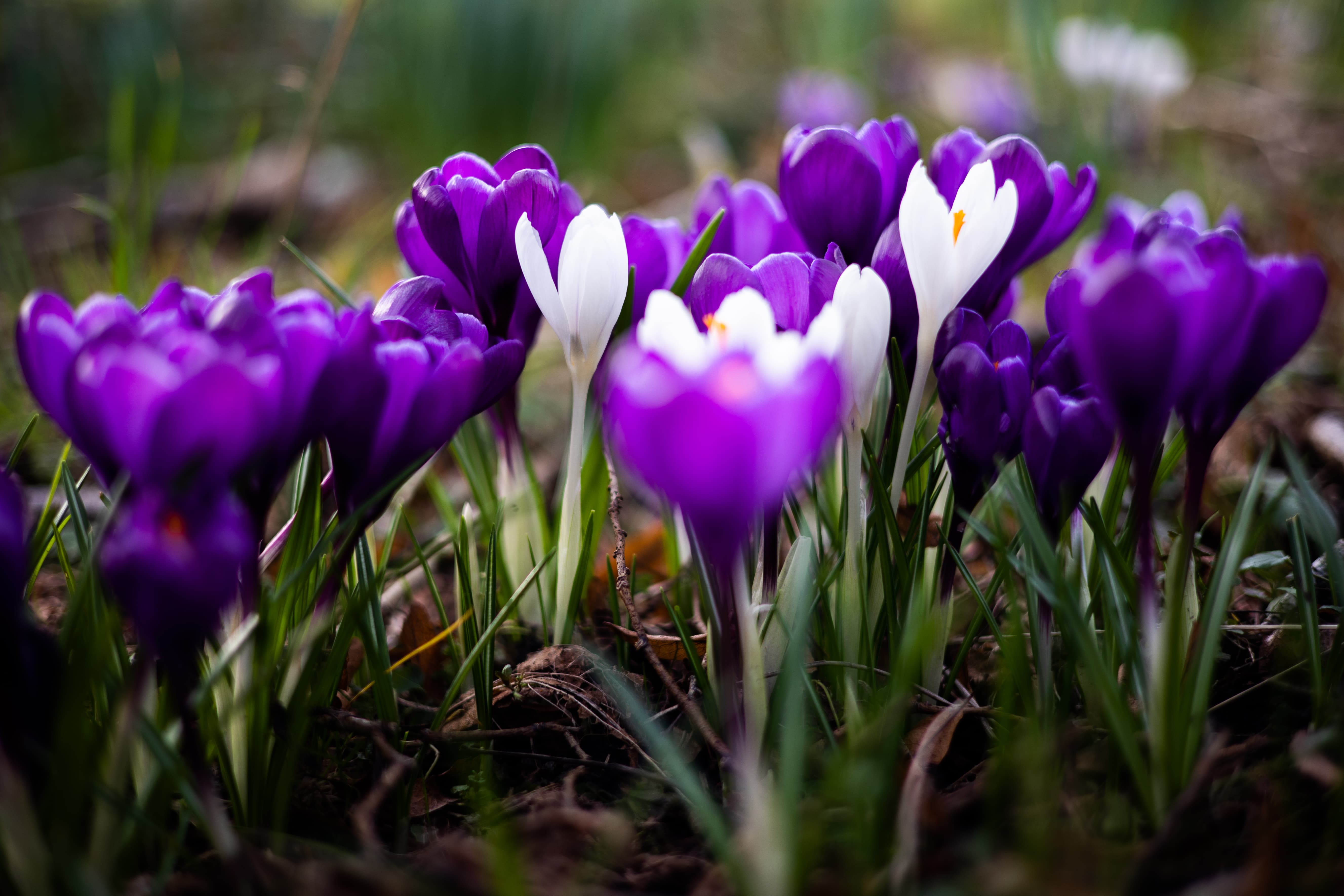 Shoot at f/4 and you’ll notice the corners get even sharper, with the sweet spot of edge-to-edge sharpness observed between f/5.6 and f/8. Diffraction softens fine detail a touch at f/16 and f/22. The sharpness the lens manages to resolve between f/4 and f/11 really can’t be grumbled at for the price. 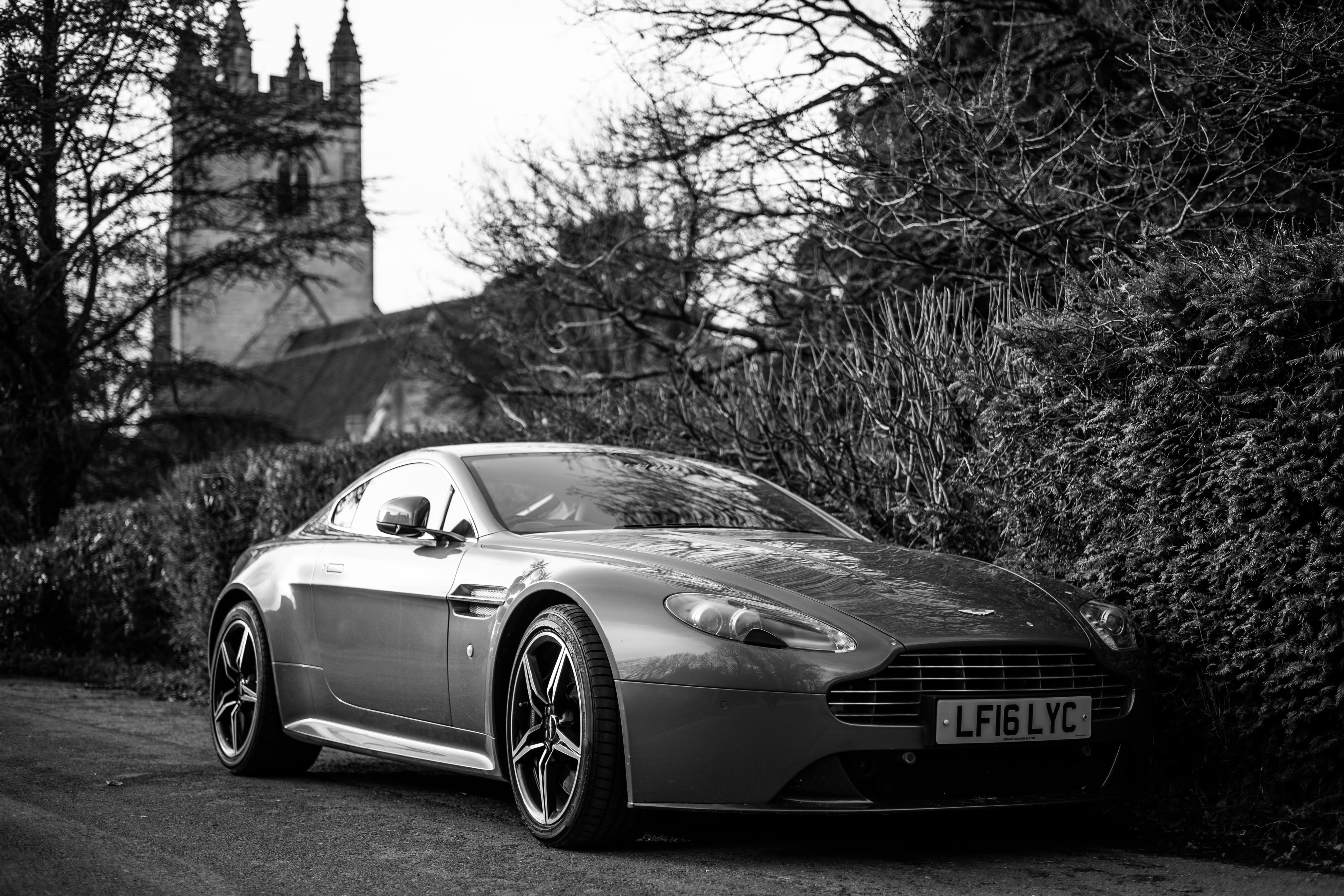 Vignetting and chromatic aberration were identified when inspecting images on the computer. Reduced brightness towards the periphery is obvious in real-world images at f/1.8 (as illustrated in the photograph of the Aston Martin above), however it does alleviate as you stop down, vanishing completely by f/4. 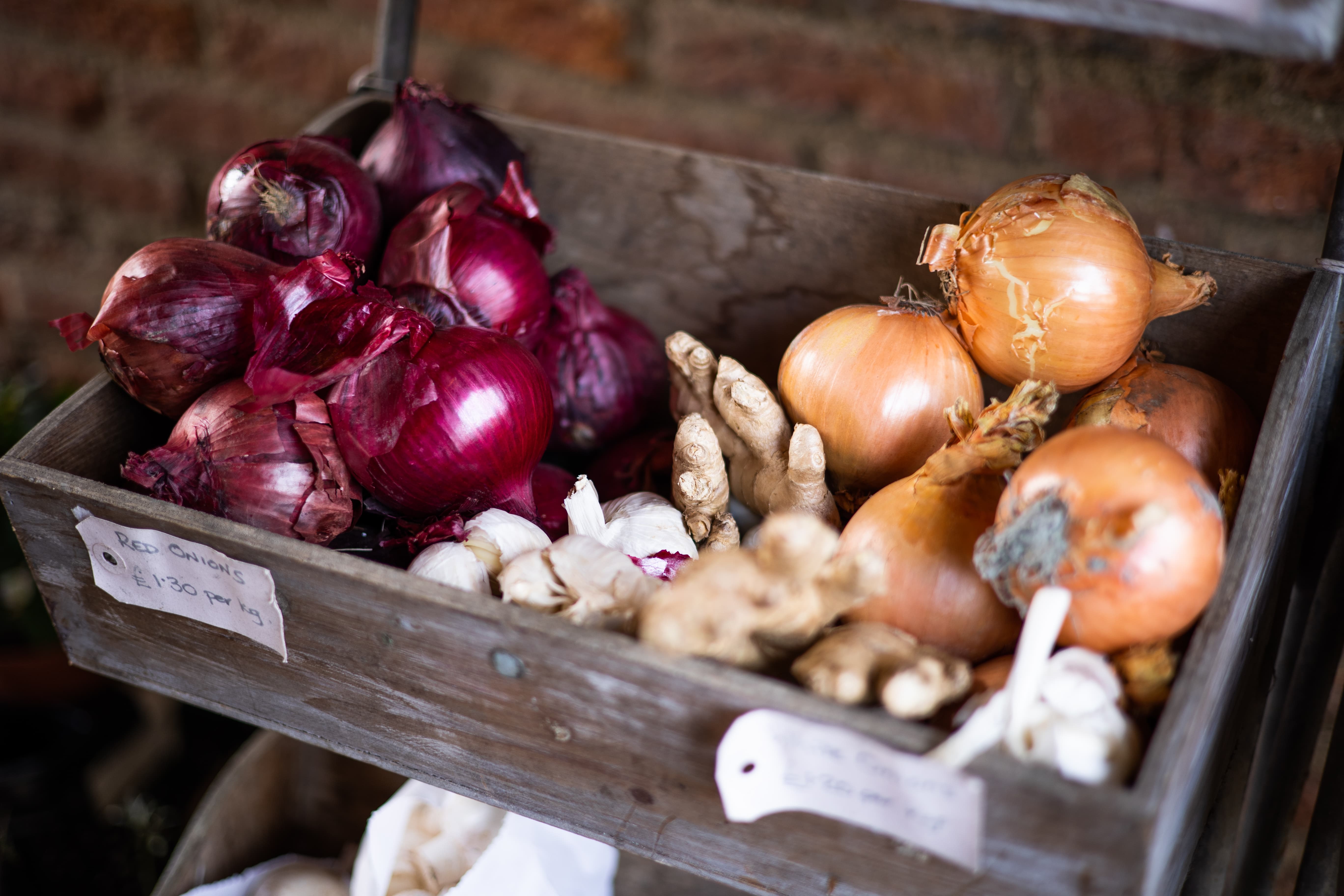 Shooting towards the sun without the optional ES-65B lens hood attached highlighted that it is susceptible to quite severe flare and prominent green and purple fringes of colour along high-contrast edges at wide apertures. The defringe eyedropper tool in Adobe Camera Raw was used to mitigate the chromatic aberration during processing, but nothing could be done to rectify the lens flare in some of my sunny portrait images. An example of the lens flare I describe can be seen in the image below. 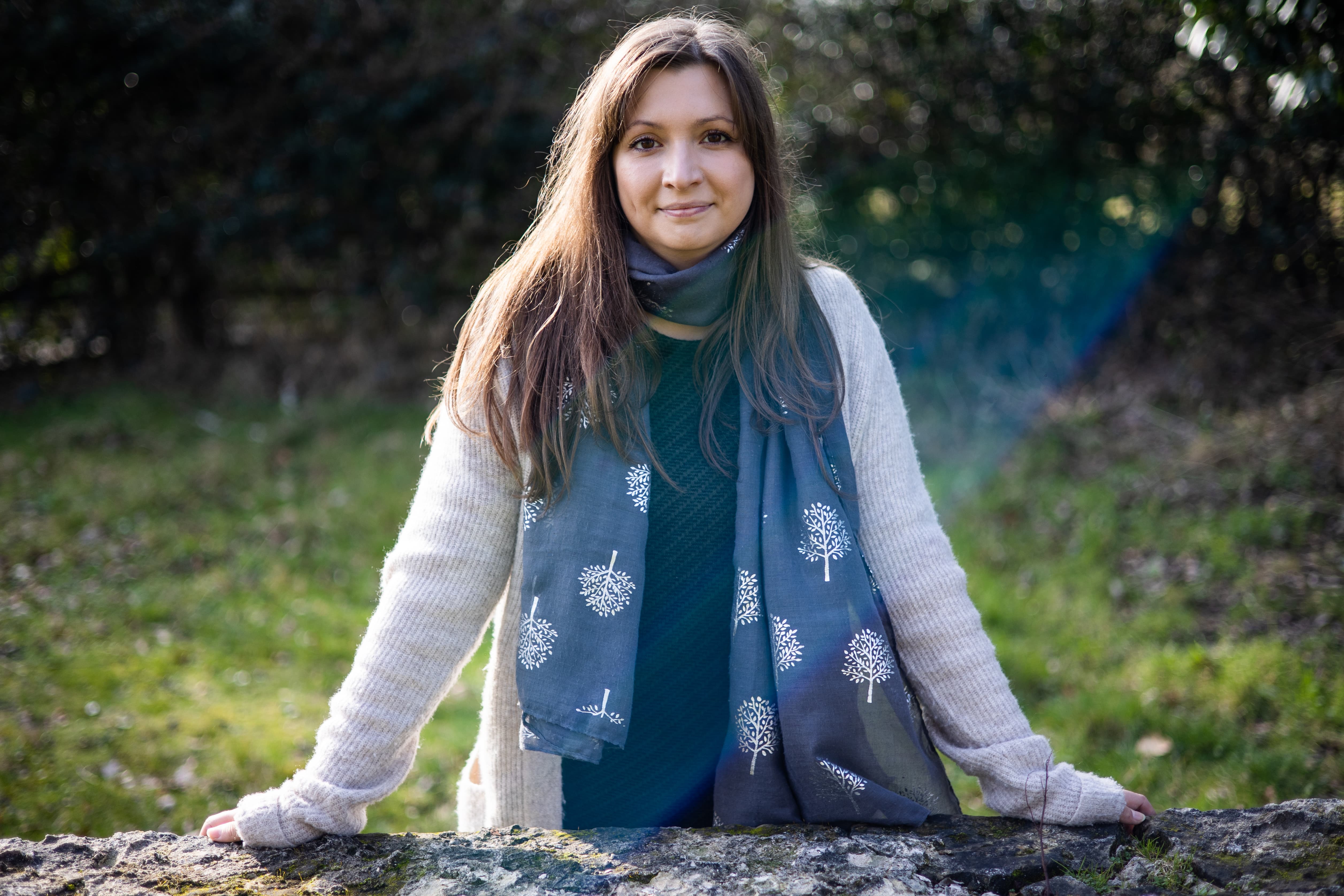 Standard primes with a focal length of 50mm usually handle distortion well and that’s exactly the case with the RF 50mm F1.8 STM. No barrel or pincushion distortion was evident in my sample images, with horizontal and vertical lines appearing straight and true.

After building up an impressive selection of L-Series lenses in RF-mount for professionals and serious photographers who demand nothing but the best, it’s good to see Canon trying to change the perception that their RF-mount lenses are too expensive by creating a more affordable lineup of lenses for amateurs and enthusiasts working to strict budgets.

Canon users who’ve bought into the EOS-R system, but haven’t been able to justify spending £2389 for the optically sublime RF 50mm f1.2L USM have had quite a wait for the RF 50mm f1.8 STM to arrive. Though it’s dearer than affordable EF-mount standard primes of yesteryear, for which I’d hoped to see a lens hood included for the price, it’s hard to argue with what it offers for the money. 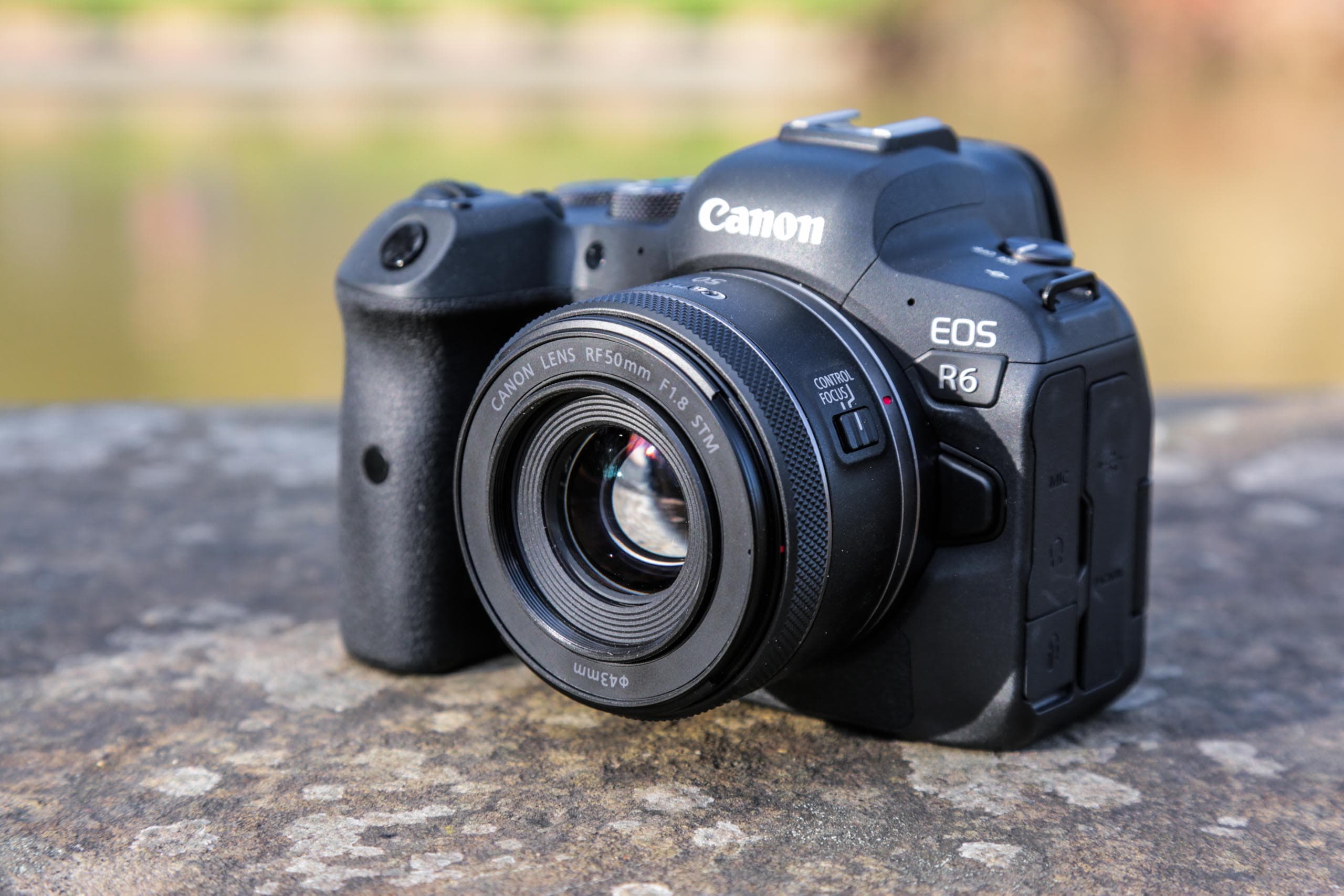 It can be used for a wide variety of different applications and its wide aperture creates visually striking images and can help keep shutter speeds fast in challenging low-light situations. If this wasn’t enough, it’s incredibly compact and keeps your setup 790g lighter than if you were to splash out on the considerably heavier RF 50mm f1.2L USM.

Anyone who regularly switches between autofocus and manual focus might be a little put off by the fact there’s no AF/MF switch. Without being able to do this directly from the barrel it requires users to enter the camera’s menu, which is more time consuming. The flip side is that the manual focus ring can be assigned to various different settings for instant and intuitive control from your left hand. 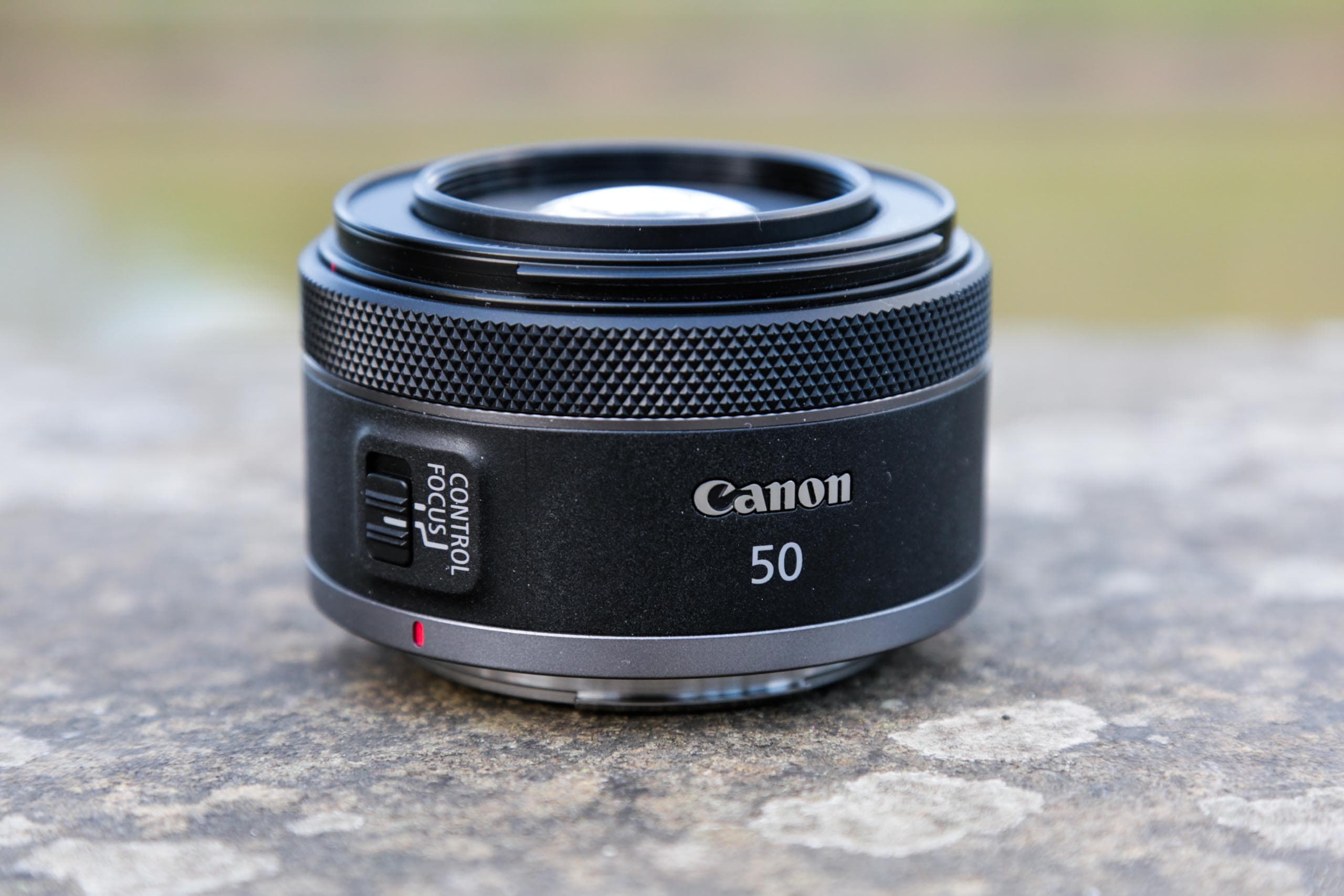 Overall, there’s more to like about the RF 50mm f1.8 STM than there is to dislike. It has a few caveats, which many budget lenses typically do, however you learn to live with them. Now that Canon has premium and affordable standard primes covered in RF-mount, it’ll be interesting to see if they develop an RF 50mm f1.4 to sit in-between, or whether a third-party manufacturer like Sigma, who are rumored to create a unique lineup for the RF mount in the future, beat them to it.