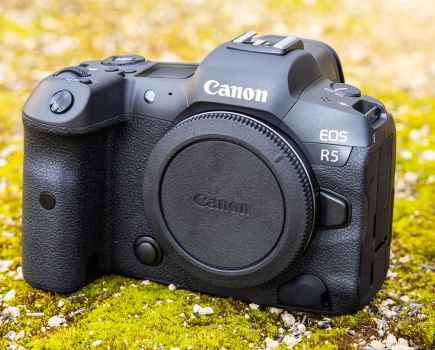 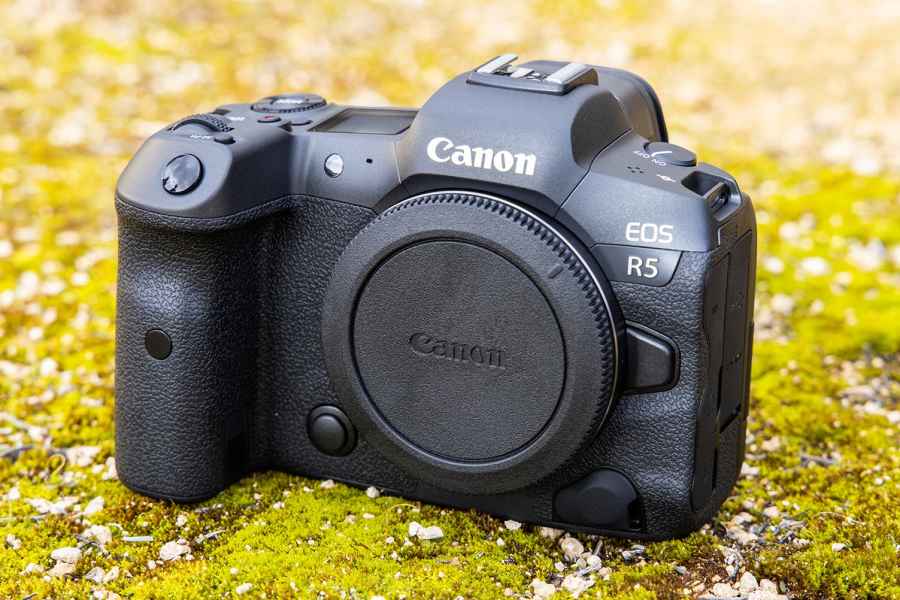 Canon EOS R5: At a Glance

UPDATE – The Canon EOS R5 has now officially been announced. Read about its full specification here.

With this year’s cancellation of The Photography Show seemingly slamming the door on any chance of viewing the Canon EOS R5 for the first time, we were pleasantly surprised when we received an invite from Canon UK earlier in the week to inspect this forthcoming high-end full-frame mirrorless camera. 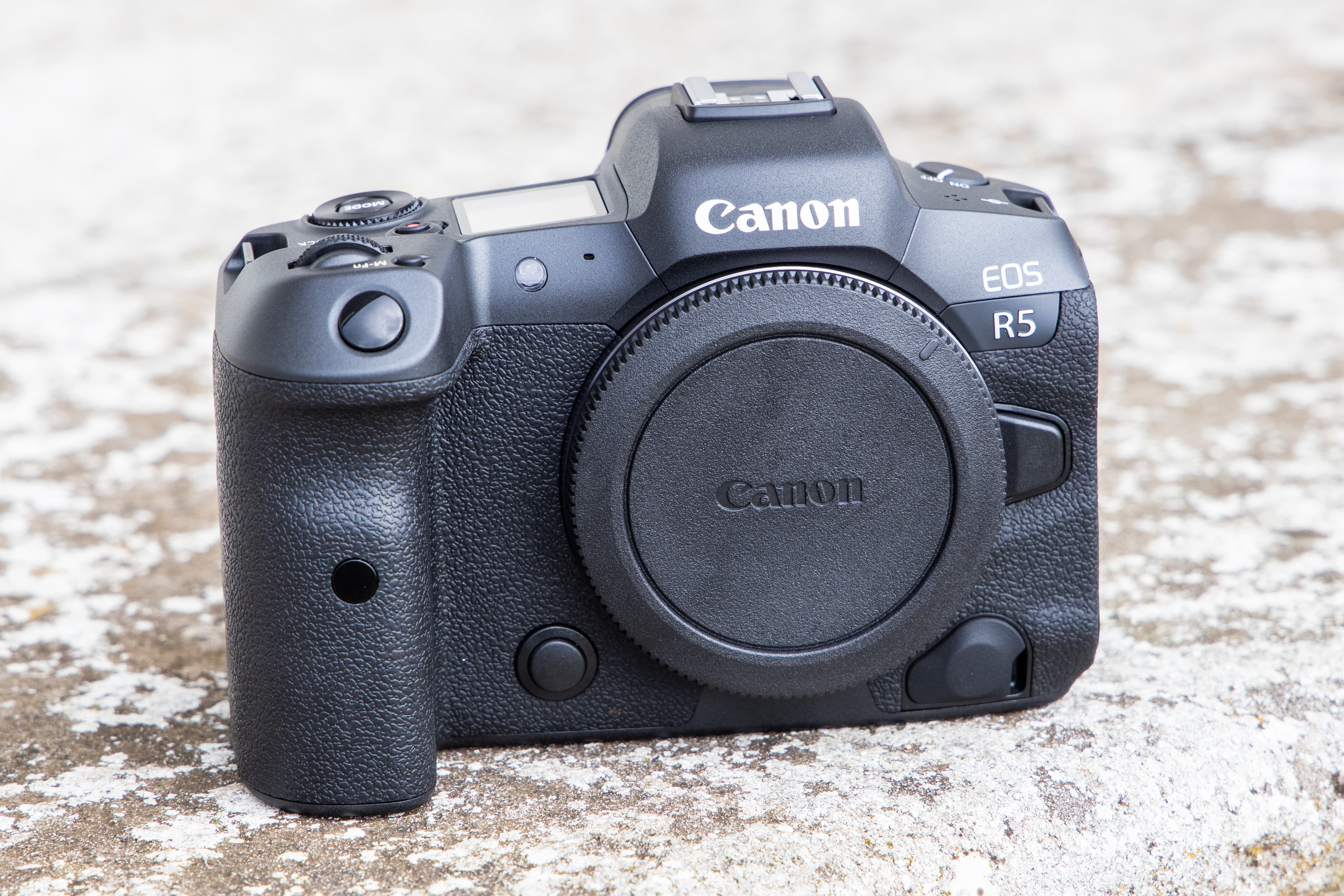 Following up on the information that has already been made public in the Canon EOS R5 development announcement, Canon has since released further details confirming the EOS R5’s ability to internally record 8K video using the full width of the sensor at up to 30p. In addition to this, Canon has revealed that the EOS R5 will support Dual Pixel CMOS AF during 8K video recording and will also provide advanced animal AF that will be able to recognise the difference between dogs, cat and birds. 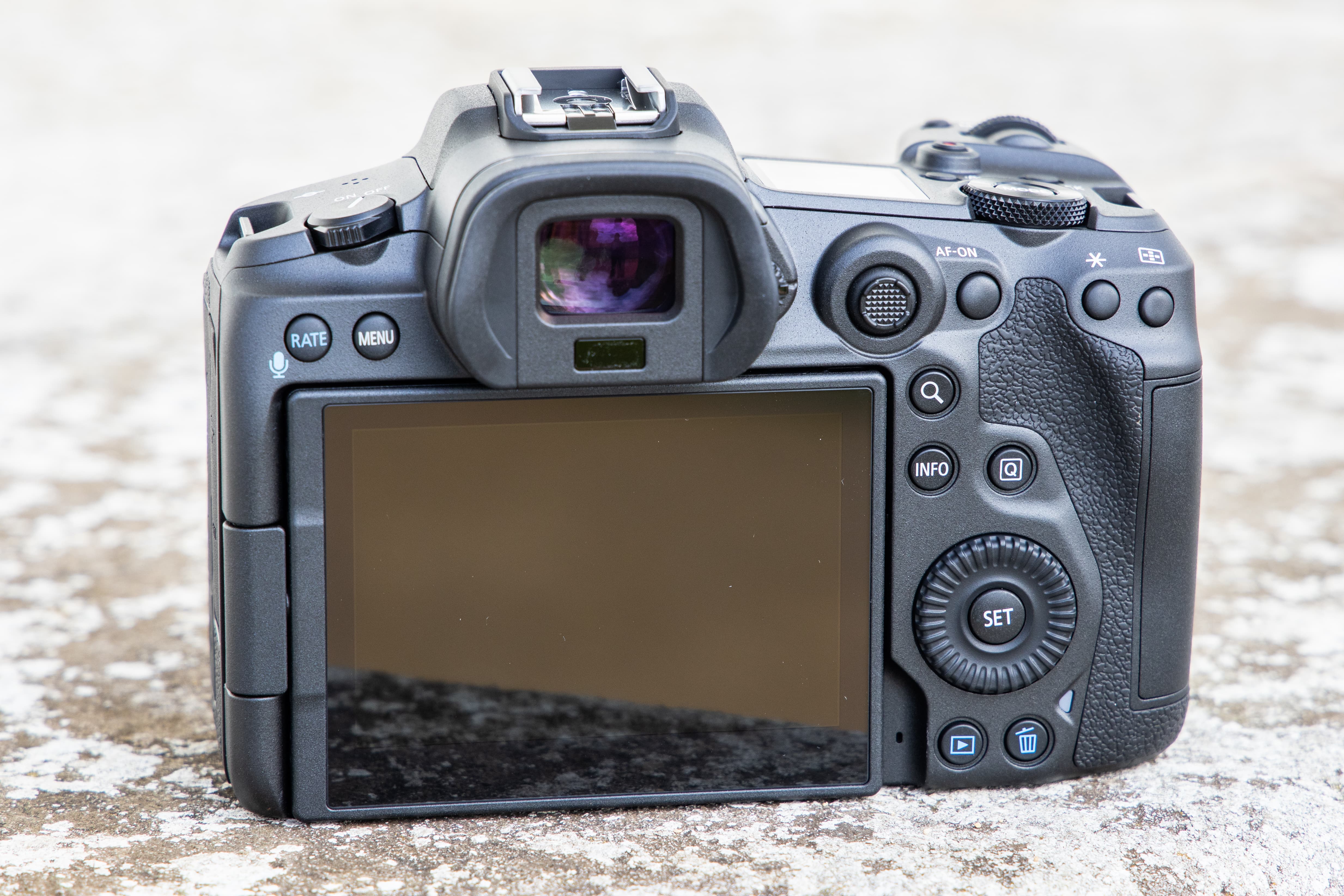 The Canon EOS R5’s full specification, price and availability is still yet to be announced, however having the opportunity to view and capture a selection of images of the camera in the flesh does allow us to inspect it and comment on what we’ve seen. During our first look of the Canon EOS R5 we were under very strict instruction not to touch, handle or operate the camera so we’re still yet to comment on how it feels in the hand.

Canon EOS R5: In the flesh

So what do we know now that we’ve taken a look at what appeared to be a working sample of the Canon EOS R5? Inspecting the EOS R5 alongside our long-term loan Canon EOS R revealed that the top plate is virtually identical with a similar arrangement of controls. The on/off switch is located similarly, albeit slightly different in its design, and the mode button, top plate display, M-Fn button and movie-rec button are all exactly where you’d find them on the EOS R. The body is a little thicker than the EOS R too, which we put down to the Canon EOS R5 featuring in-body image stabilisation and the EOS R doing without it. 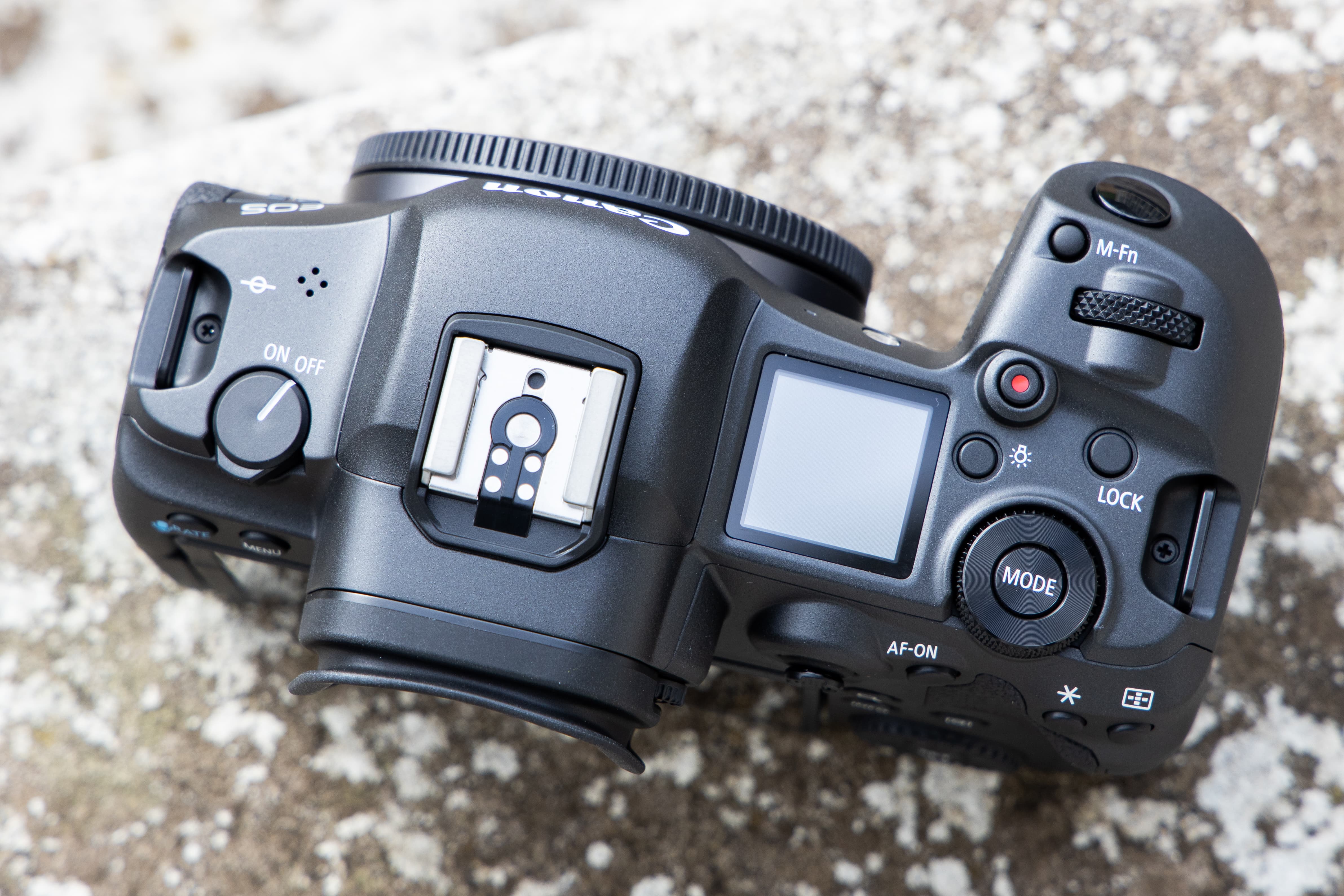 There’s much more to comment on at the rear of the camera. The EOS R5 doesn’t inherit the same M.Fn bar that appeared on the EOS R. This came under heavy scrutiny and wasn’t particularly well received on the EOS R so it’s perhaps no surprise to see it excluded. Instead, the EOS R5 provides a more traditional looking arrangement of buttons and dials at the rear that’s more akin to Canon’s EOS 5D-series of DSLRs.

The EOS R5 has an AF joystick, though it does seem to sit quite high at the rear of the body and could possibly result in a bit of a stretch with your thumb to reach it. We’ll have to wait until we get the opportunity to pick one up before we can report on this in more detail. Alongside it you get a dedicated AF-ON button, with magnify, info and quick menu buttons beneath. The control wheel is slightly smaller than you’ll find on the Canon EOS 5D Mark IV, but is likely to be much better received than the more basic four-way controller you get on the EOS R. 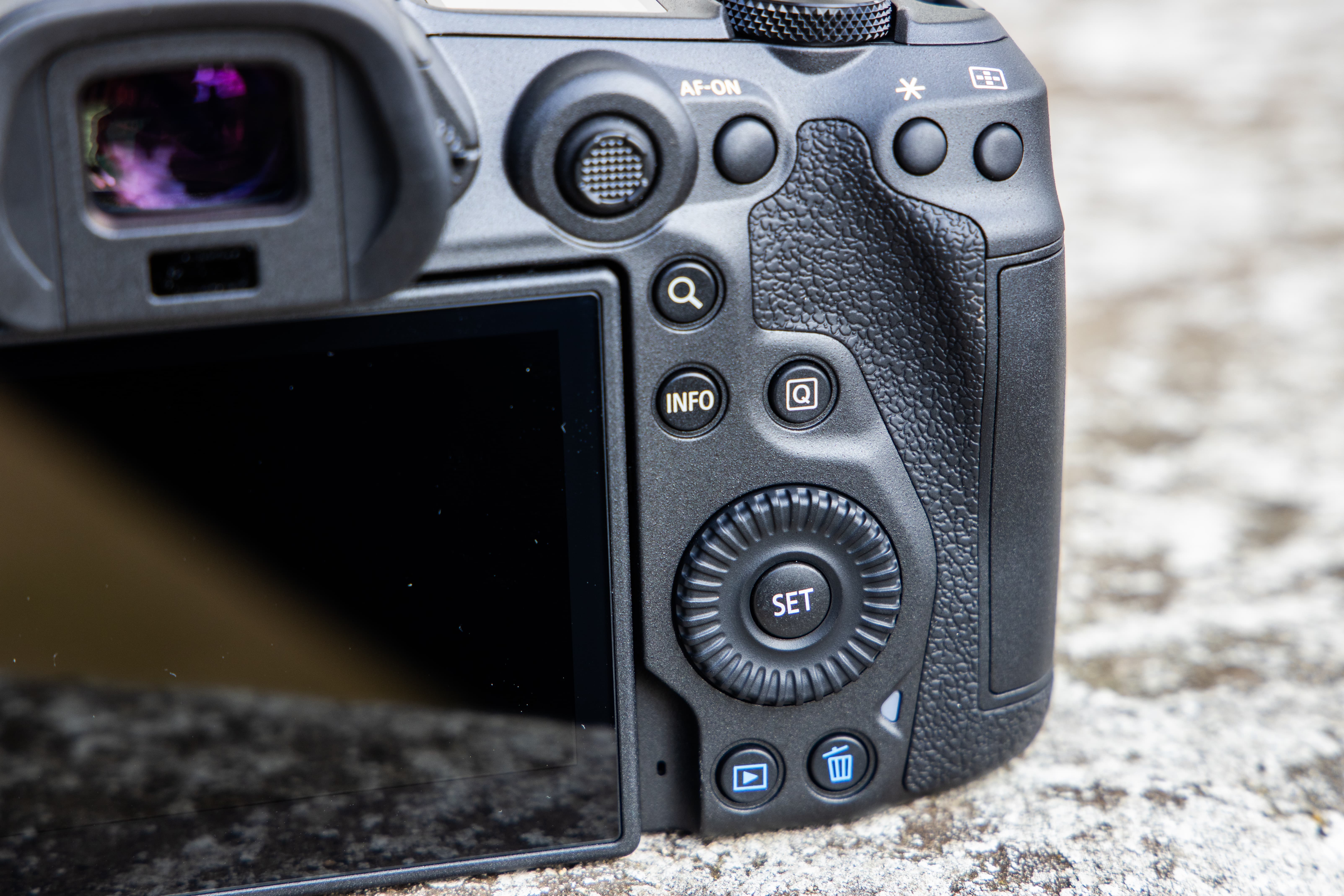 As for the screen, this appears to be slightly larger in size compared to the EOS R’s. The cutaway to help pull it out is also located at the lower right corner rather than at the top right. It’s the vari-angle type of screen and it can be folded in on itself when it’s not being used. Another useful button at the rear of the EOS R5 is its dedicated RATE button, which is also found on the EOS 5D Mark IV. The microphone icon beside it suggests that users will be able to depress it to record voice memos.

At the front of the body there appears to be an infra-red remote control receiver on the handgrip, a depth-of-field preview button, and what could be a connector for an E3-type remote release. On the side are microphone, headphone, USB, HDMI, and flash sync sockets. We weren’t allowed to inspect the battery compartment, but we highly suspect it’ll accept Canon’s LP-E6N battery that can be recharged in-camera. 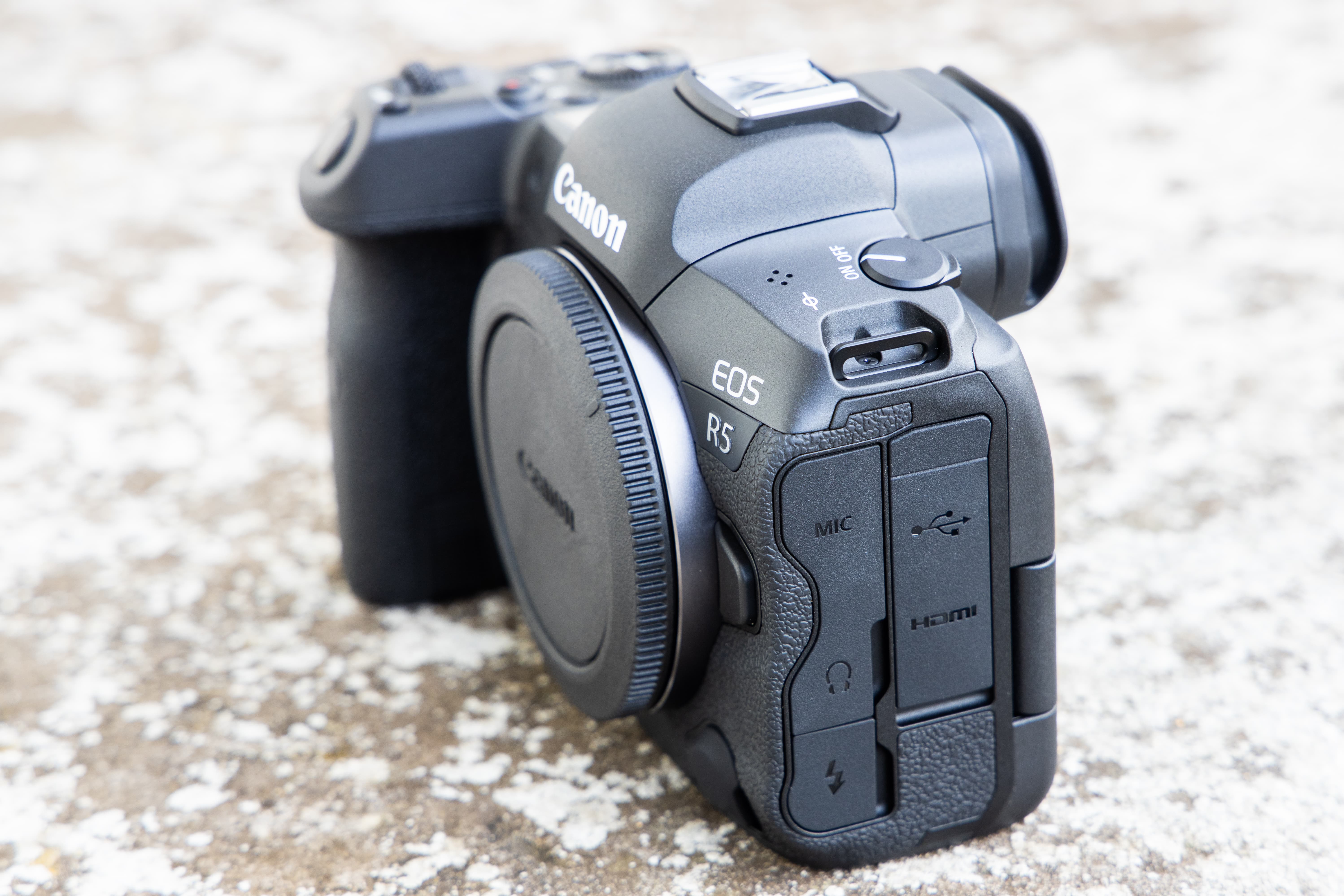 Microphone and headphone ports are located behind the same rubber flap. No information about the EOS R5’s weather resistance has yet been released

In regard to design of the handgrip, the thumbrest at the rear protrudes more than it does on the EOS R. The memory card door isn’t tall enough to accommodate two SD cards directly one above the other, suggesting that the card slots will be positioned alongside each other instead. No information on what memory cards the EOS R5 will accept has yet been disclosed, but given the huge data throughput required by 8K, we wouldn’t be surprised to see at least one CFexpress slot, perhaps alongside an SD card. The finish and texture of the body appears very similar to the EOS R.

It seems we’ll have to wait a little while longer before the full specification is announced, but we’ll bring you all the news about the Canon EOS R5 as and when we receive it so be sure to watch this space!

Canon’s development announcement told us that the EOS R5 will feature in-body image stabilisation that works in concert with optically-stabilised lenses, along with dual card slots for backing-up files in-camera. The camera will shoot at 12 frames per second with its mechanical shutter, or 20 fps using its electronic shutter, and be capable of 8K video recording. Current 8K standards define a resolution of 7680×4320 pixels, and this implies a sensor of at least 40MP (assuming a standard 3:2 aspect ratio), making the EOS R5 the highest resolution model in the EOS R range to date. 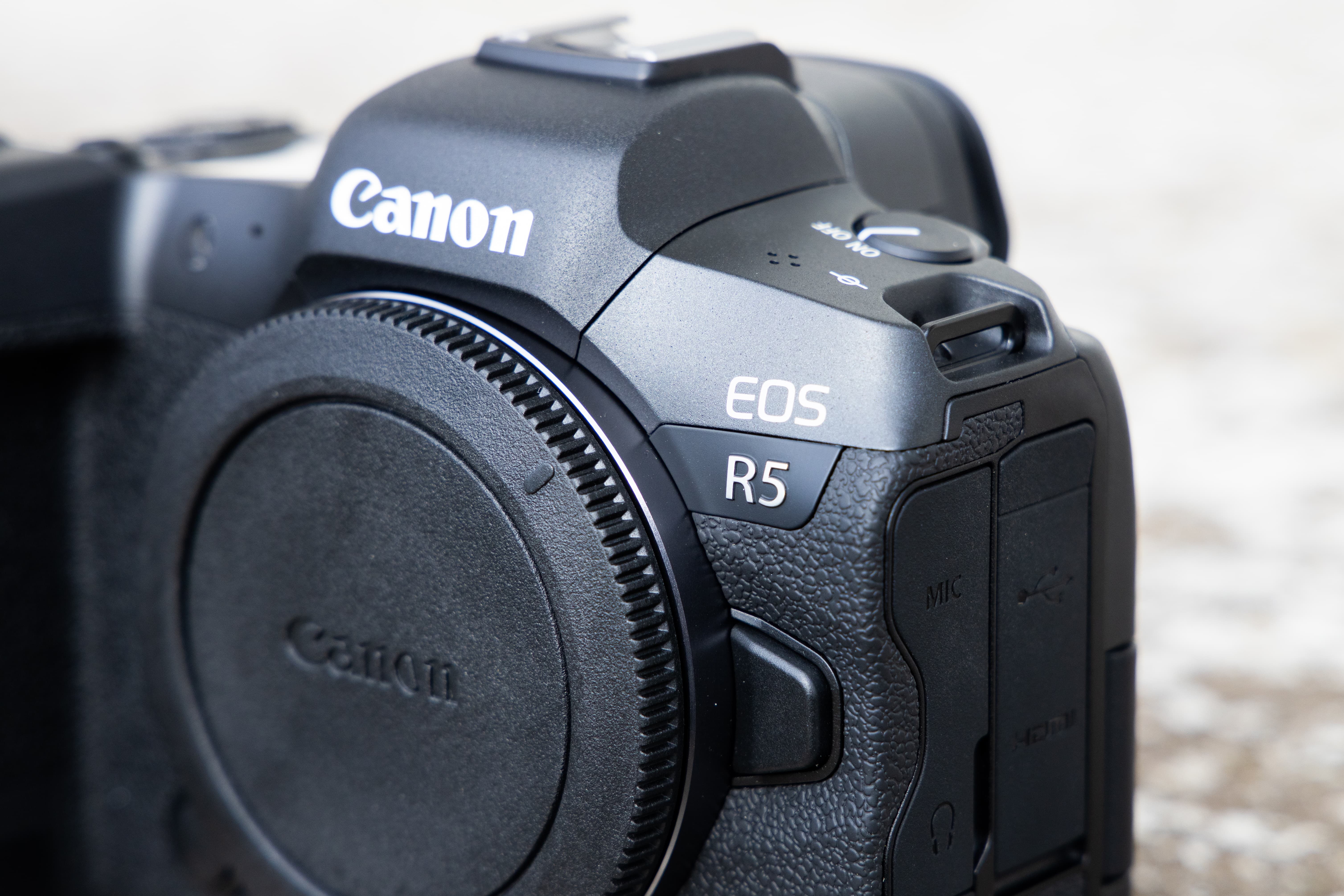 No official release date for the EOS R5 has been announced, but we’ll update this page as soon as we receive more information about its specification and price