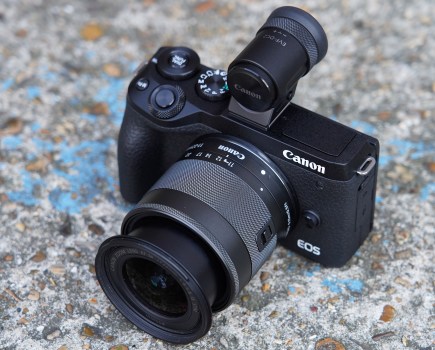 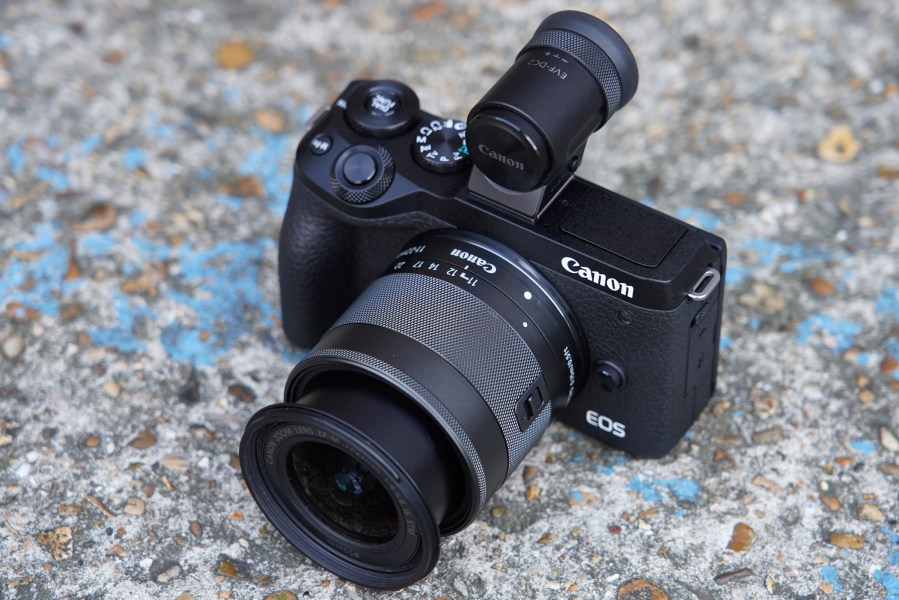 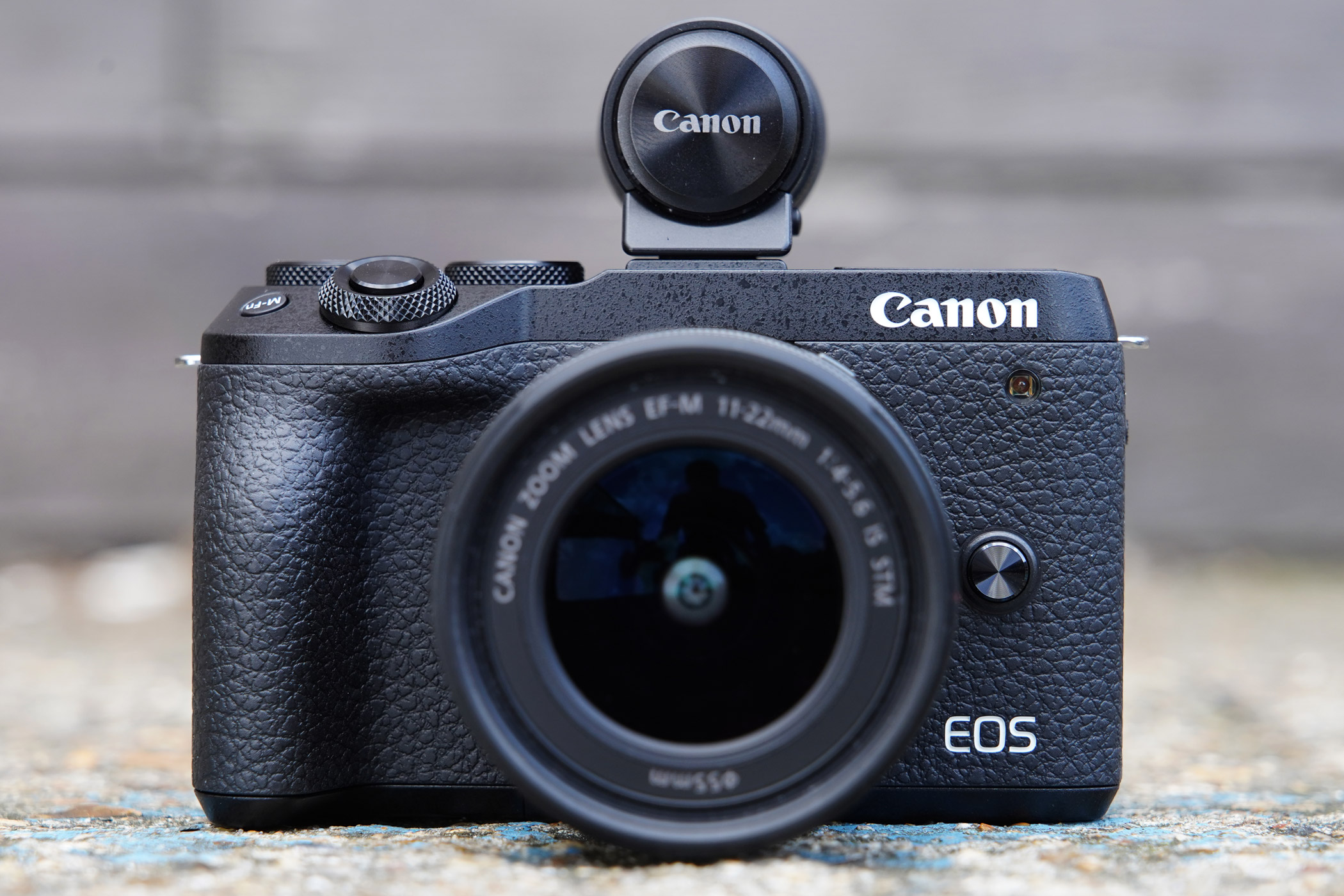 The Canon EOS M6 Mark II is a small, flat-bodied camera with a removable viewfinder

Alongside the EOS 90D, Canon has also launched an updated version of its enthusiast-focused APS-C mirrorless camera. Just not the one we expected, as instead of revamping the SLR-shaped EOS M5, it’s instead come up with the EOS M6 Mark II. This is a small flat-bodied camera, with a removable electronic viewfinder that slides onto the hot shoe. It’s a once-common design concept that other manufacturers have now dropped from their ranges, apparently on the basis that photographers overwhelmingly prefer integrated viewfinders. I’d certainly rather see one built-in, if not central then a pop-up corner-mounted unit like on the recent G5 X Mark II. So all-in all, this feels like an odd choice from Canon.

Internally the EOS M6 Mark II uses the same imaging core as the EOS 90D, most notably Canon’s new 32.5MP APS-C sensor. This is the first major boost in resolution for this sensor size since the 28MP Samsung NX1 of 2014, promising larger maximum print sizes and perhaps more usefully, greater scope for cropping compared to its peers. It’ll be interesting to see whether photographers find this to be a compelling selling point for Canon’s new models, given that most seem to have been perfectly happy with sensors around 20-24MP mark for the past decade. 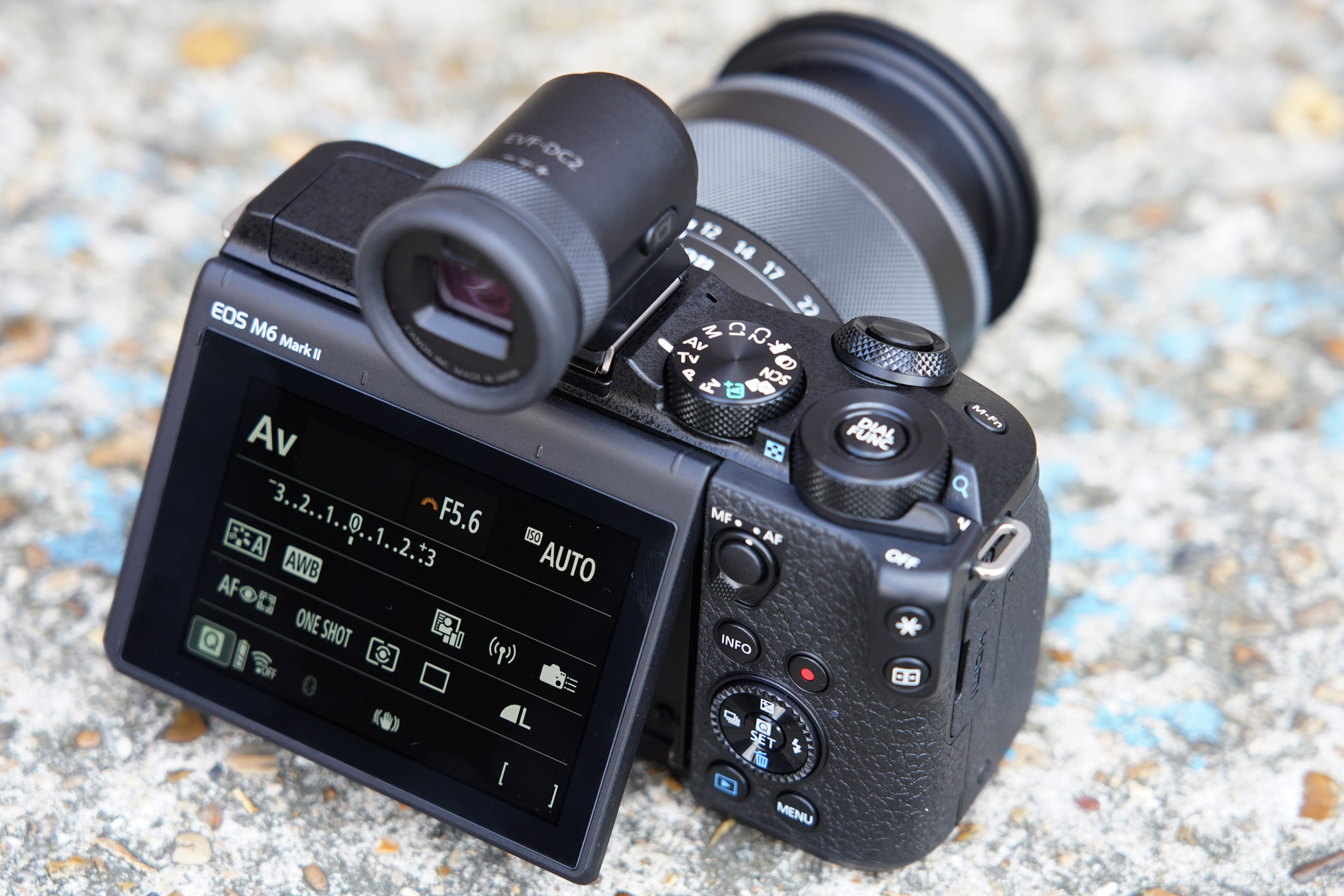 Canon has included plenty of external control points, complemented by an excellent touchscreen

Despite the increase in resolution Canon has increased the sensitivity range, which now covers ISO 100-25,600 as standard, with an extended ISO 51,200 setting also available. As with Canon’s other recent models, the sensor benefits from Dual Pixel CMOS technology that allows every sensor pixel to be used for phase detection. As a result, the EOS M6 Mark II offers 5481 AF points covering 88% of the sensor width and all of its height. In practice, this means the focus point can be positioned freely to cover your subject, unless it’s at the left or right edge of the frame (or top or bottom, when shooting in portrait format). It also sports this year’s must-have feature, Eye Detection AF for shooting portraits. 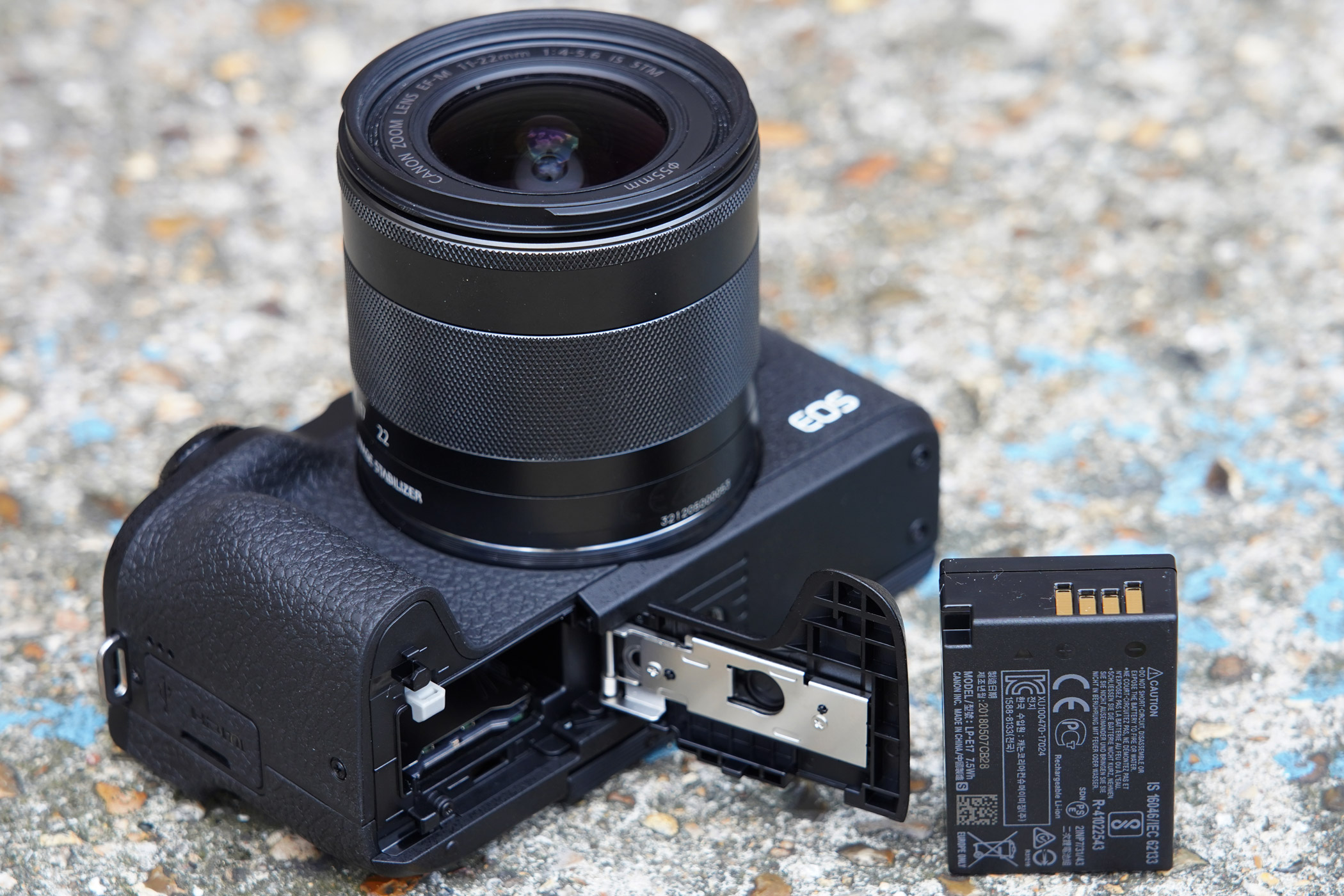 The LP-E17 battery promises 305 shots per charge, or 410 in the power-saving ECO mode

Equally impressive is the continuous shooting speed, which thanks to the Digic 8 processor reaches 14 frames per second. Turn on Canon’s new raw burst mode, and this jumps to a remarkable 30fps, still with AF tracking. It’s also possible to enable a ‘pre-shooting’ mode that buffers frames from before the shutter button is completely depressed, similar to the Pro Capture option found in high-end Olympus OM-D models. 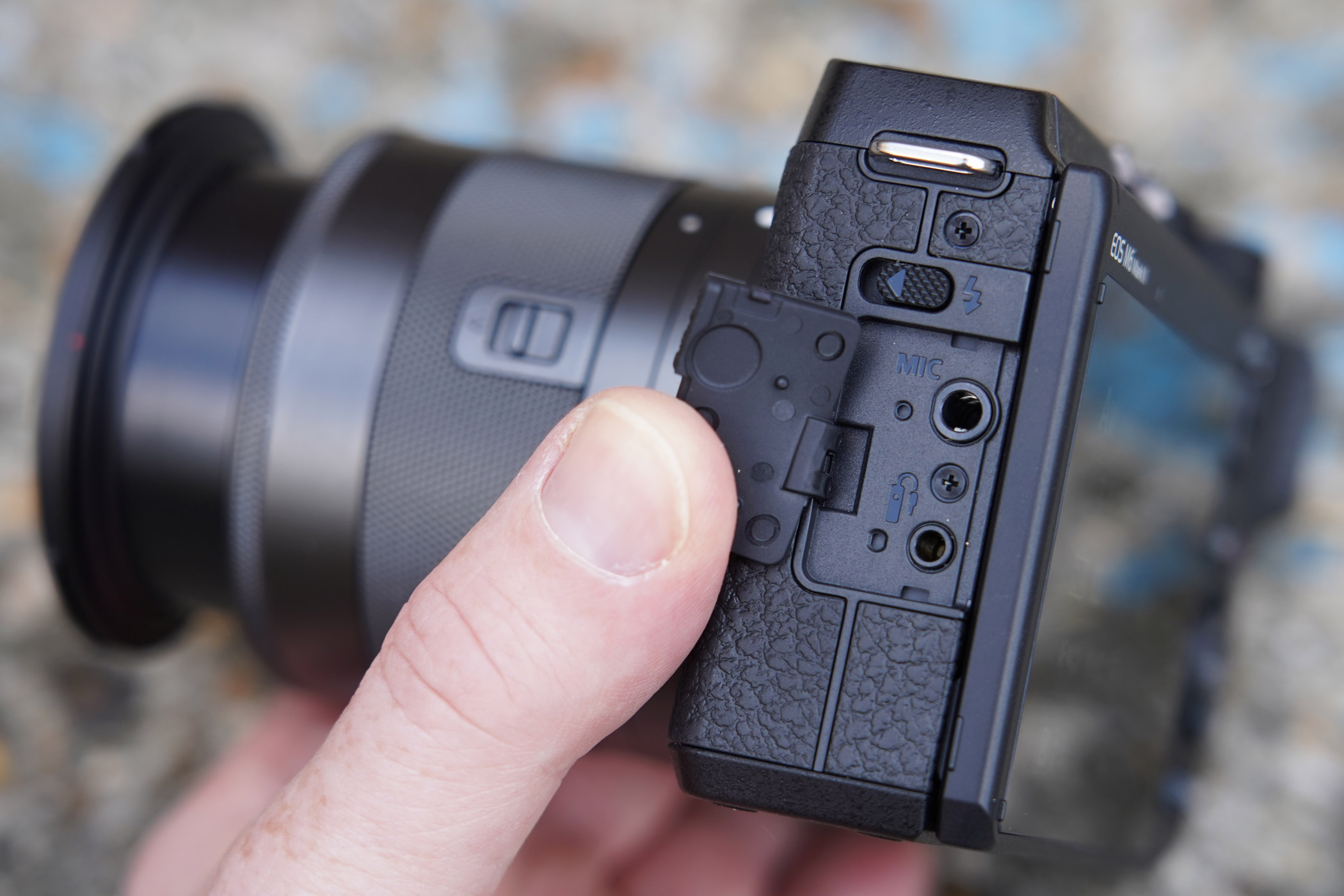 By default the EOS M6 II uses a fully-mechanical shutter that offers a fastest speed of 1/8000sec, but this can be extended to 1/16,000sec using the electronic shutter option. Strangely, in my short time testing the camera there didn’t seem to be an electronic first-curtain setting to eliminate blur from ‘shutter shock’ vibration, and minimise operational noise. The shutter is reasonably quiet, but it’s not quite as refined as we’ve come to expect from mirrorless cameras at this price point. 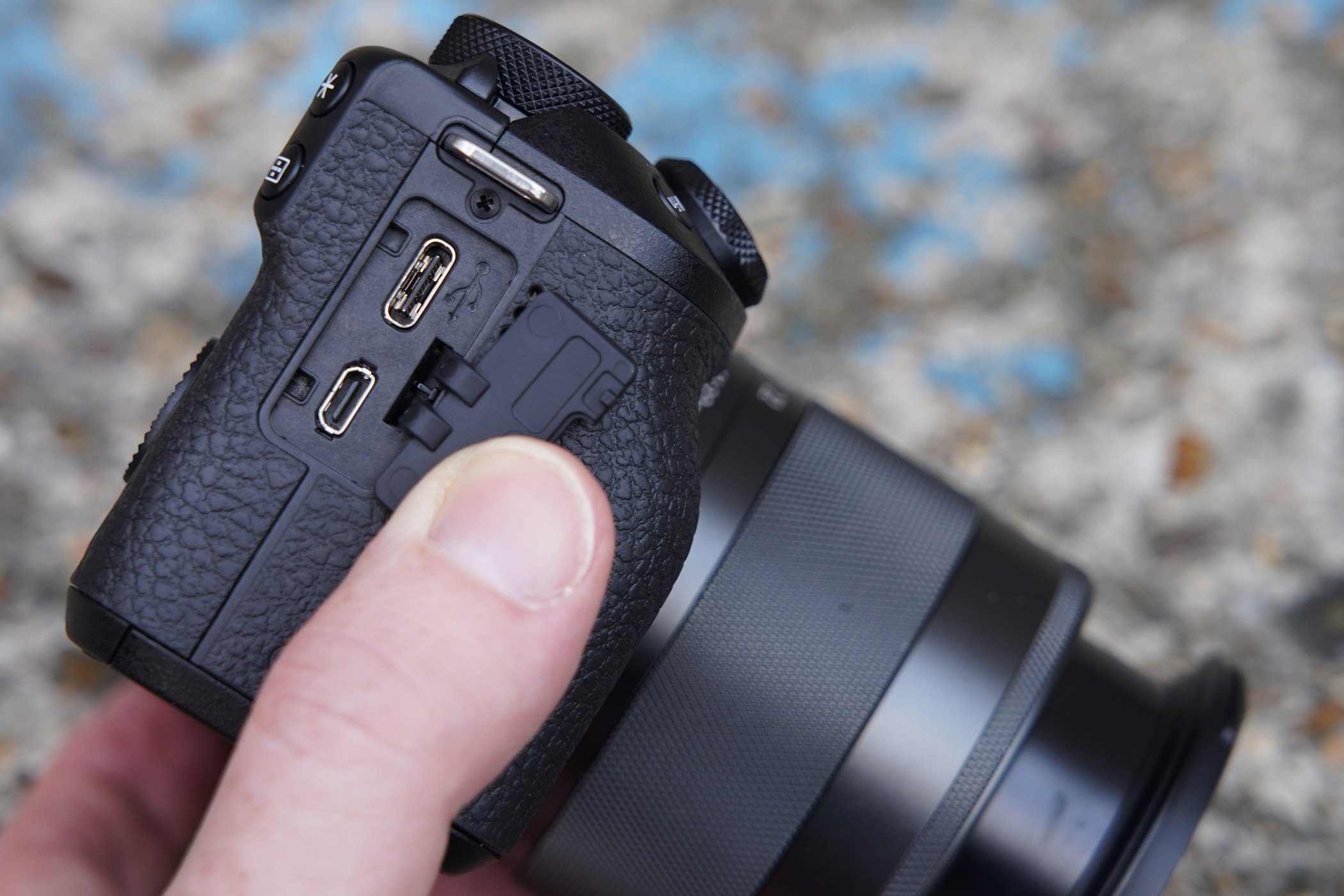 On the handgrip there are USB-C and micro HDMI connectors

Turning our attention to video, 4K (3840 x 2106) recording is available at 30fps using the full sensor width, which counts as an extremely welcome advance compared to the heavily-cropped 4K Canon currently offers from its 24MP APS-C cameras. There’s also a microphone socket for high-quality sound, but unlike the EOS 90D, sadly no space for a headphone port for monitoring audio (this is another argument in favour of making a larger-bodied camera with an integral viewfinder).

In terms of design, the Mark II sports a revised control layout compared to its predecessor, that borrows elements from the full-frame mirrorless EOS R range. It has twin electronic dials on the top plate, with a Dial Func button in the centre of the latter giving quick access to a range of photographic functions such as ISO, exposure compensation and white balance. Unfortunately though, this results in the loss of the M6’s dedicated exposure compensation dial that was stacked on top of the electronic dial. 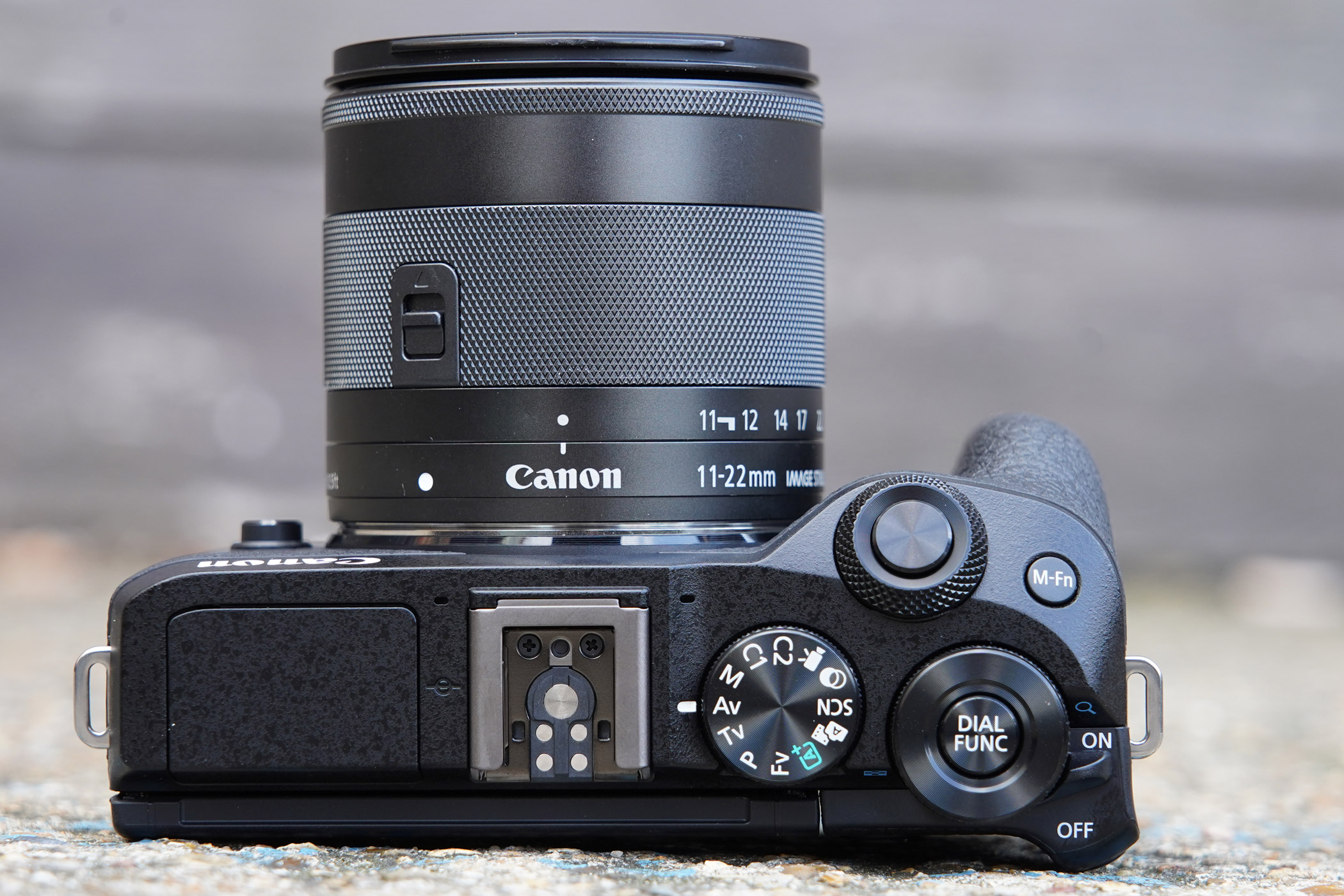 Canon has also added an AF-ON button that’s surrounded by an AF/MF switch, but has failed to include a focus-point joystick, relying on touchscreen control instead. While many users will be happy with this approach, those who aren’t will have to put up with a clunky alternative of pressing the AF area selection button, then moving the focus point using the d-pad. 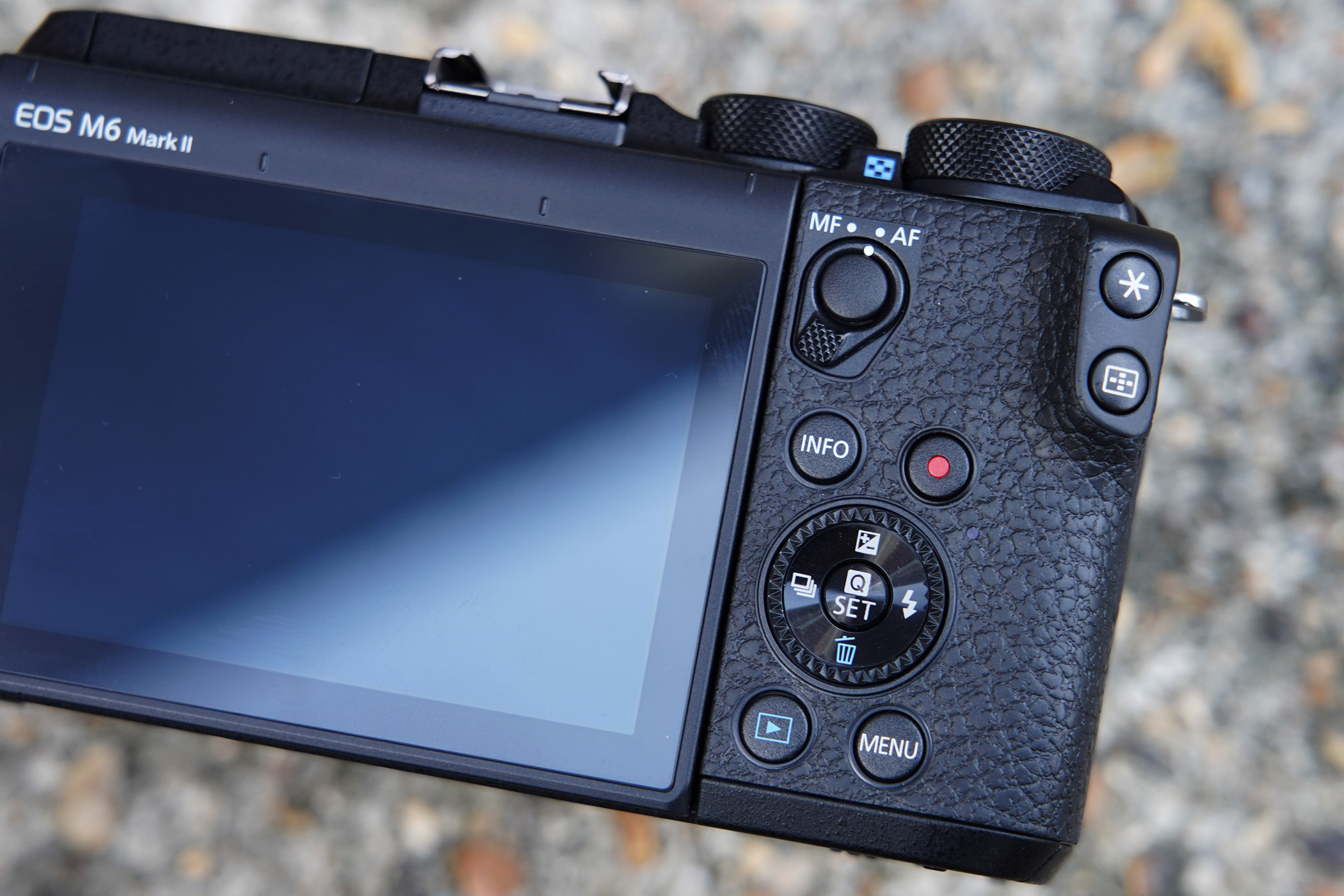 Canon has added an AF-ON button to the EOS M6 Mark II, surrounded by an AF/MF switch

One clear improvement though is the deeper handgrip, with a well-defined space on the back for your thumb. As a result, and typically for Canon, the EOS M6 Mark II fits much better in your hand than most other firms’ small models.

As mentioned above, the EOS M6 Mark II relies on a removable electronic viewfinder. As a result the body is more compact than SLR-shaped models with fixed viewfinders, however the moment you add the EVF-DC2 on top, it gets considerably more bulky than its competitors. 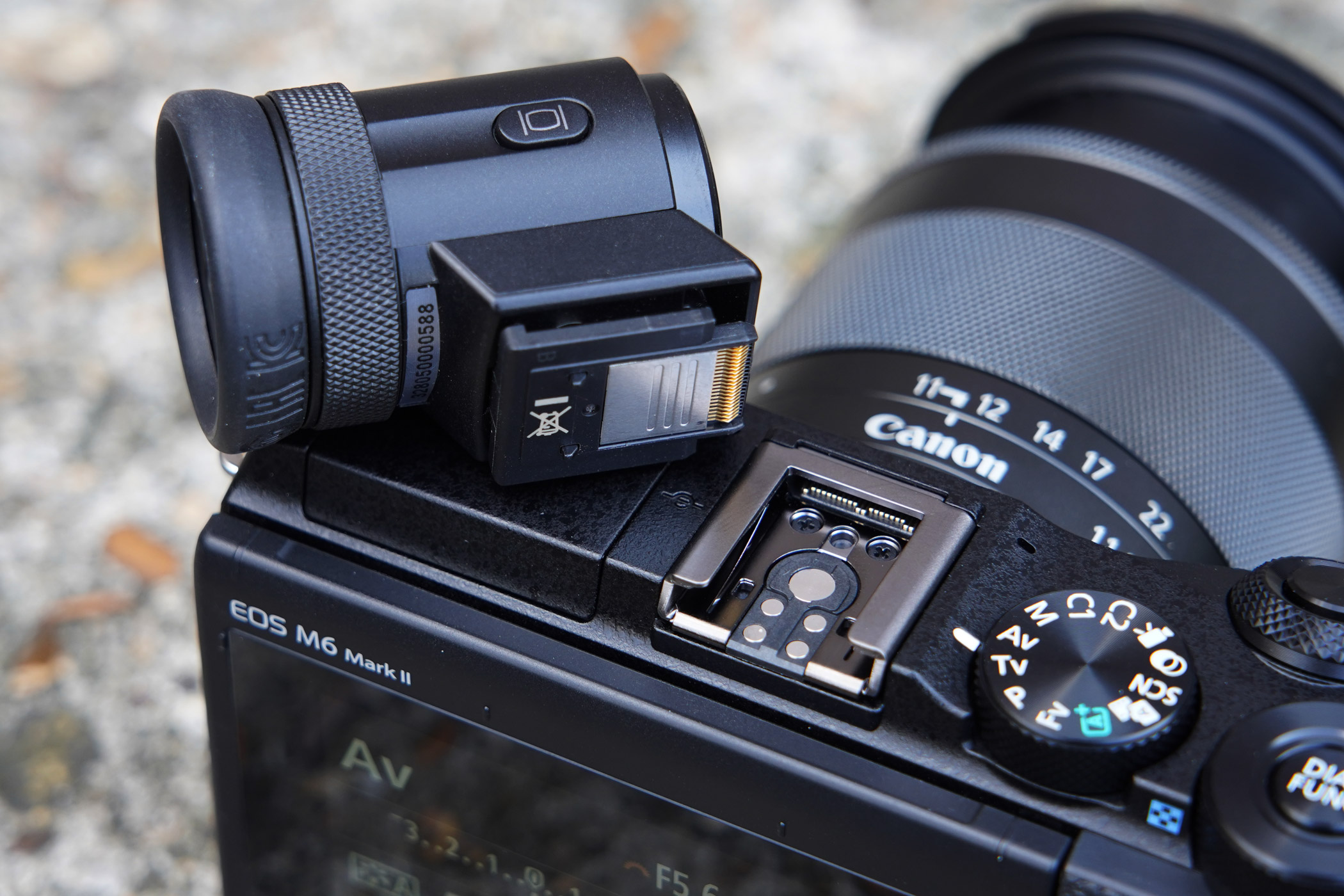 Here you can see the connections for the EVF-DC2 viewfinder

The viewfinder itself is the same as that used by the EOS M6, meaning that it’s a 2.36m-dot unit with a reasonable, but not outstanding 0.63x equivalent magnification. My initial impression using it on the M6 II is that it’s rather high in contrast, which can make shadow details difficult to discern. It’s also important to understand that you can’t use a viewfinder at the same time as an on-camera Speedlite, because both attach to the hot shoe. 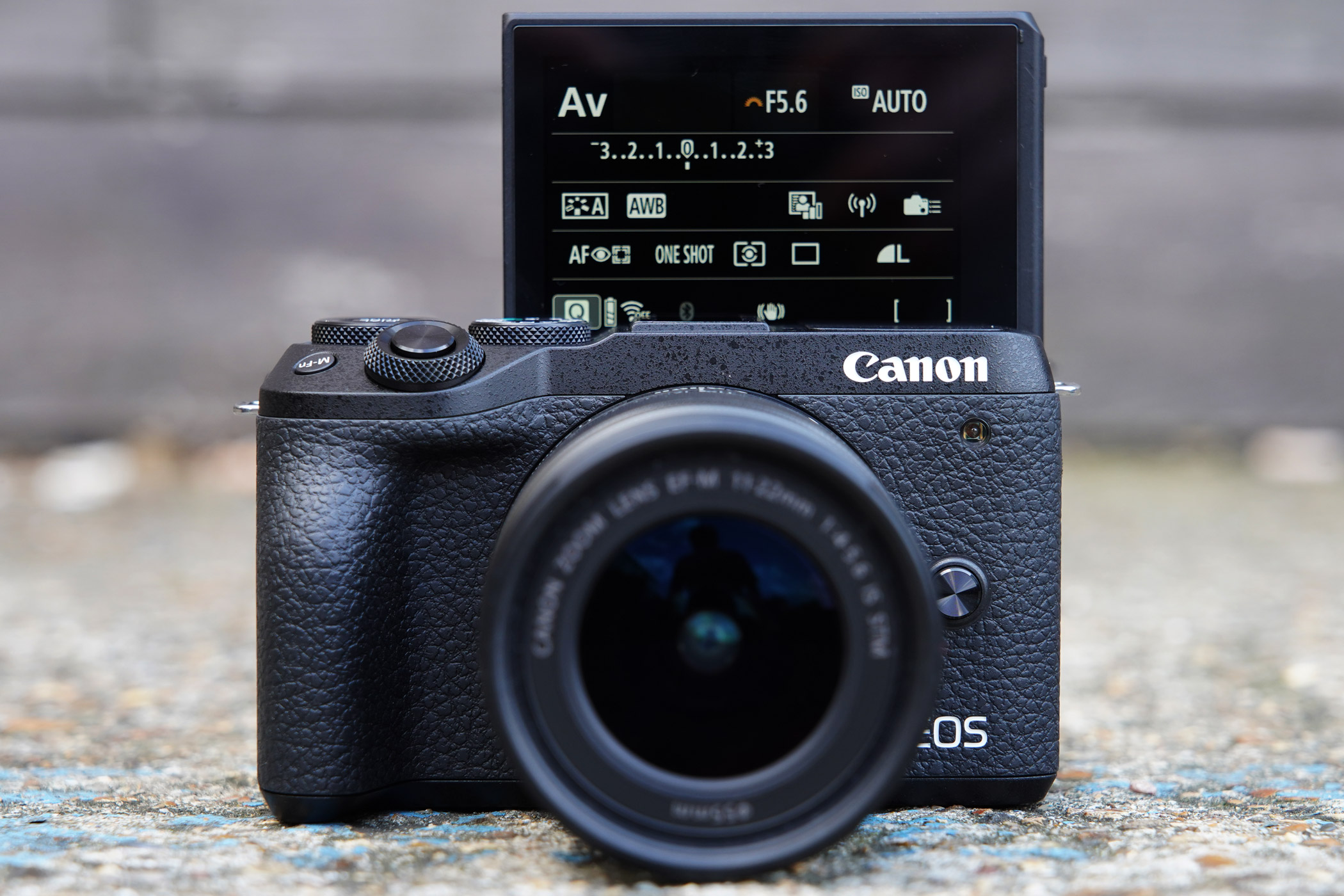 Beneath the finder you’ll find a 3in, 1.02m-dot touchscreen that can tilt down or upwards, with the option to face forwards over the top of the camera for vlogging or shooting selfies. However in this position it will clash with anything that may be mounted on the hot shoe, be that a viewfinder, flash or microphone.

It has to be said that the EOS M6 Mark II is a slightly surprising release from Canon. While the other camera makers have now decided that electronic viewfinders should be built into to the body , Canon has revisited the idea of the removable EVF. This gives the camera a clear selling point in terms of small body size (without the EVF), although it’s far from clear whether photographers will consider this a compelling advantage. Personally I can’t help but feel that Canon has compromised its mirrorless model to provide a clear differentiation with the EOS 90D DSLR, rather than build the most appealing camera it possibly can. 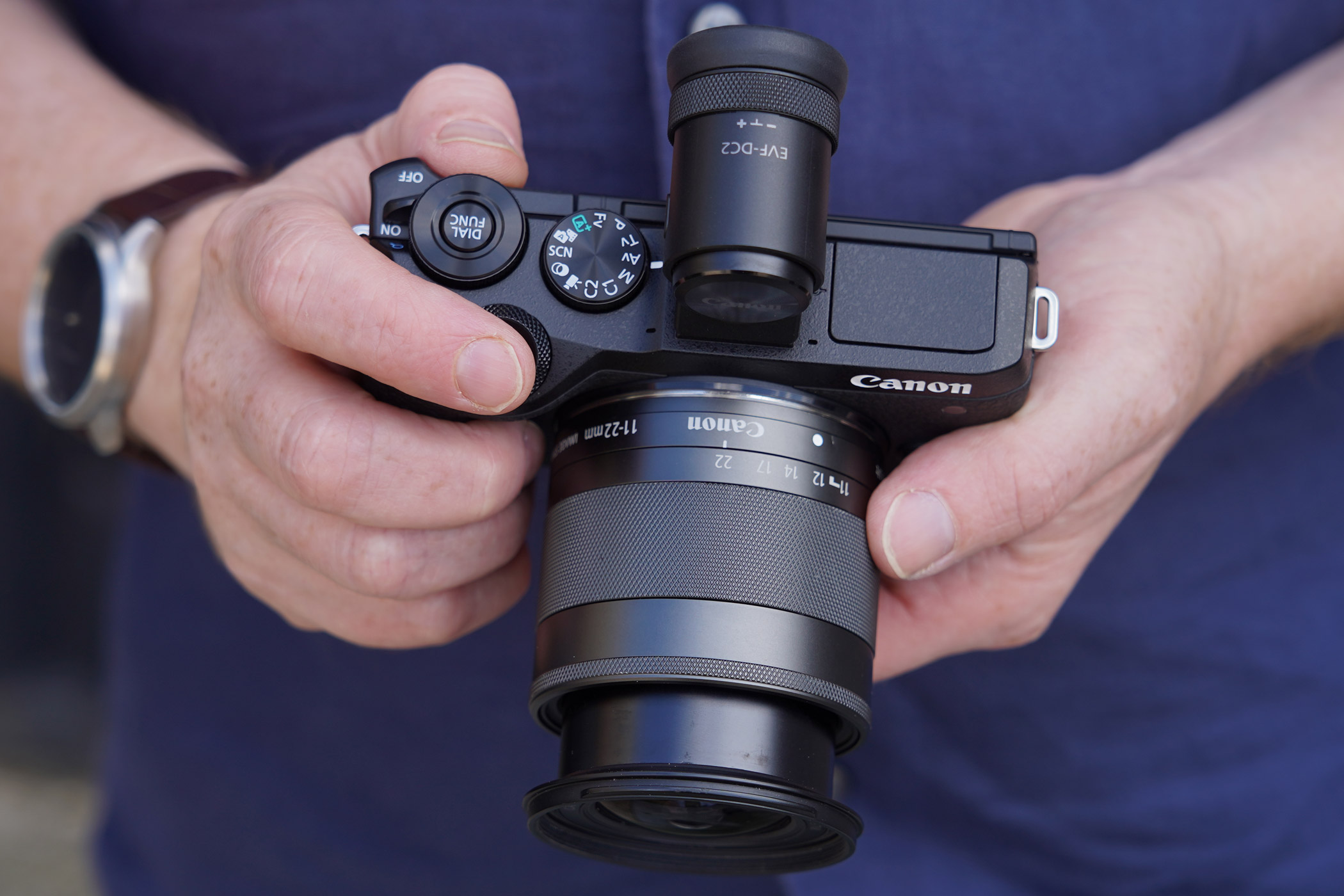 Of course the EOS M6 Mk II has plenty of other eye-catching specifications to help it stand out, most obviously the 32.5MP resolution and 14fps shooting. This matters, because it’s going head-to-head with some extremely capable cameras such as the Fujifilm X-T30, Panasonic Lumix G90 and Sony Alpha 6400, all of which have their own particular strengths. They also all give access to a much wider range of native lenses compared to Canon’s rather under-developed EF-M range, which is sorely lacking in the fast primes and premium zooms that are valued by enthusiast photographers. 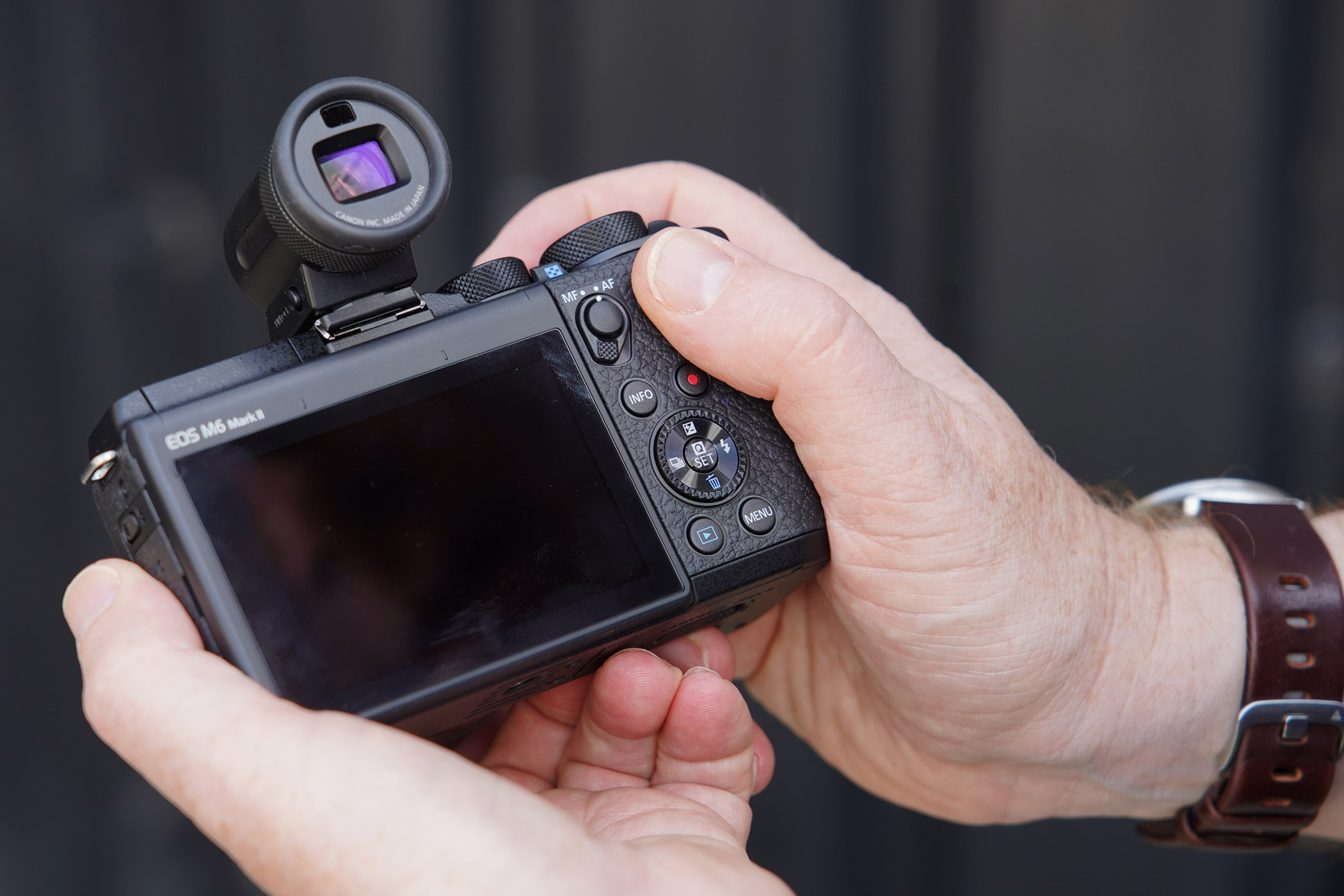 Of course, the biggest questions regarding the EOS M6 Mark II will centre around the new sensor and how well it performs, not just in terms of resolution but also dynamic range, noise and autofocus. I was able to test the camera briefly in the challenging surroundings of a dimly-lit indoor go karting track, and my initial impressions are that the camera is capable of acquiring focus exceptionally quickly, but is less capable of tracking a fast-moving subject consistently. Unfortunately, though, it’s impossible to draw any sensible conclusions regarding image quality yet. That’ll have to wait until we get our hands on a camera for a full review. 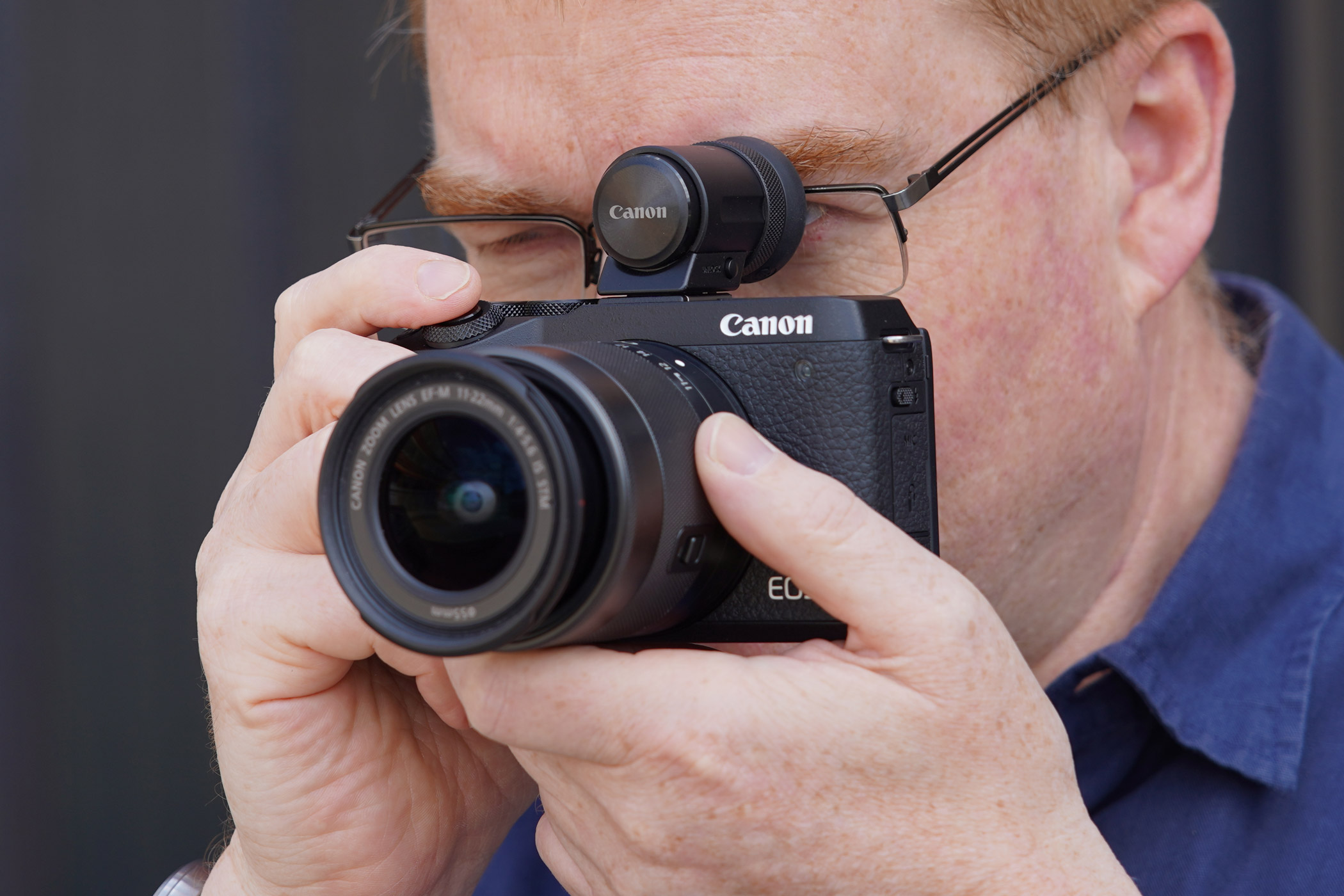