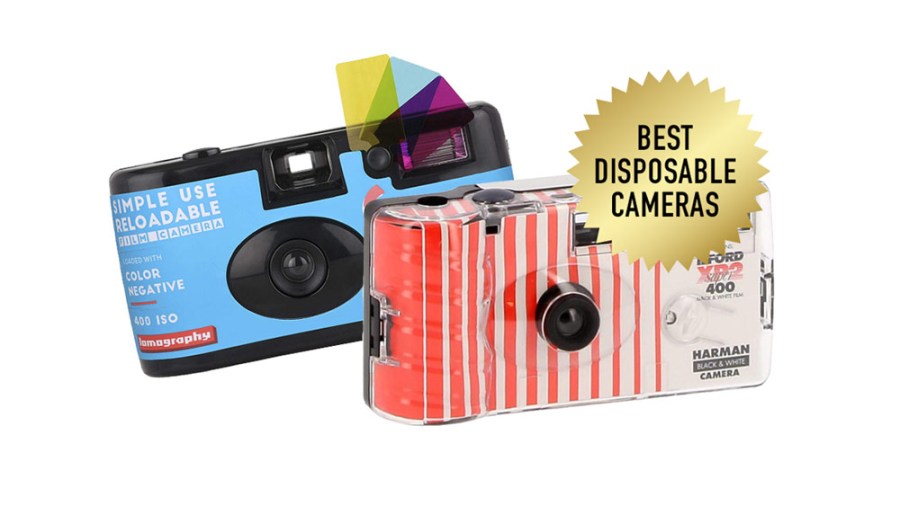 Wondering what’s the best disposable film camera to buy? Kavi Shah and the AP team round up great options to suit all your photography needs and budgets.

The best disposable film cameras can be handy for all sorts of things. They work really well as party favours for weddings – you may well have been to one where several were strewn across the tables for guests to use. They’re good fun for travel and holidays, as they require no specialist photographic knowledge to operate, and they also serve as a fun introduction to the joys of analogue photography.

We’re big fans of analogue photography at AP, and have published plenty of articles on how to get the most out of film, including our guide to how to do film photography on a budget. For this guide, we’ve picked out the best disposable film cameras that we feel are worth your time, including options from Kodak, Ilford, Fujifilm and others.

Why should I buy a disposable film camera?

Disposable film cameras are affordable, pocket-sized and easy to take everywhere. If you’re going somewhere that you would prefer not to take your expensive smartphone or digital camera, like a music festival or beach holiday, they can be a great choice. They’re also incredibly easy to use, meaning children can also have fun with them. They won’t run out of battery, and they’re designed to be able to produce a decently exposed image in most shooting situations.

Plus, there’s the fun factor! Disposable cameras only let you point and shoot, with no previews or deletes, meaning you can simply live (and shoot) in the moment. The limit to the number of exposures forces you to be selective about what you photograph, and makes you wait for the decisive moment. How many shots do you think are in your gallery that you’ve never looked at since you captured them? How different would it look if you could only shoot a limited number?

One of the joys of analogue photography is the feeling of delayed gratification and surprise that comes from having to wait for your photos to be developed. Also, disposable cameras give your physical prints of your images, ones that you can hold, keep, and give away. It’s much more tactile than digital files (though if you want digital copies, most modern labs will scan your negatives for you and email you the files).

How to choose your disposable film camera

Disposable film cameras come with their own fixed shutter speed, aperture (mostly f.9-11) and focus. Most have a similar design, but there are certain features to bear in mind when choosing which one is right for you: 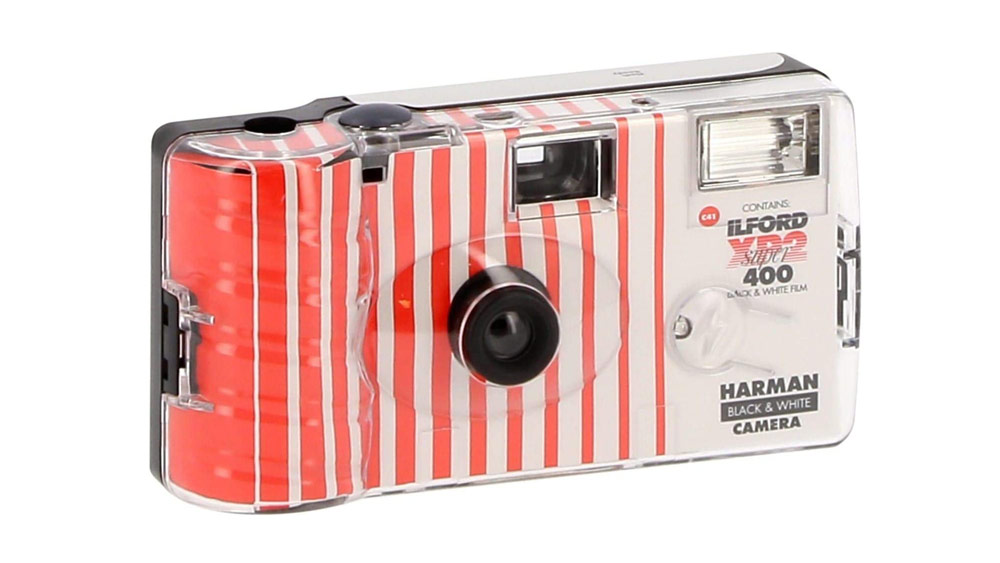 For timeless black-and-white photography, this is the camera to go for. It has one major benefit over monochrome models: its film can be developed at most high-street C41 labs, which means it doesn’t require a specialist black-and-white one (which can be a bit more costly). You can get 27 shots from the camera, and there’s an in-built flash.

The camera offers 27 shots, features a toggle-able flash and, most importantly, produces artsy black-and-white images. It is best to avoid low light situations with this camera, though you can use the flash in these scenarios. 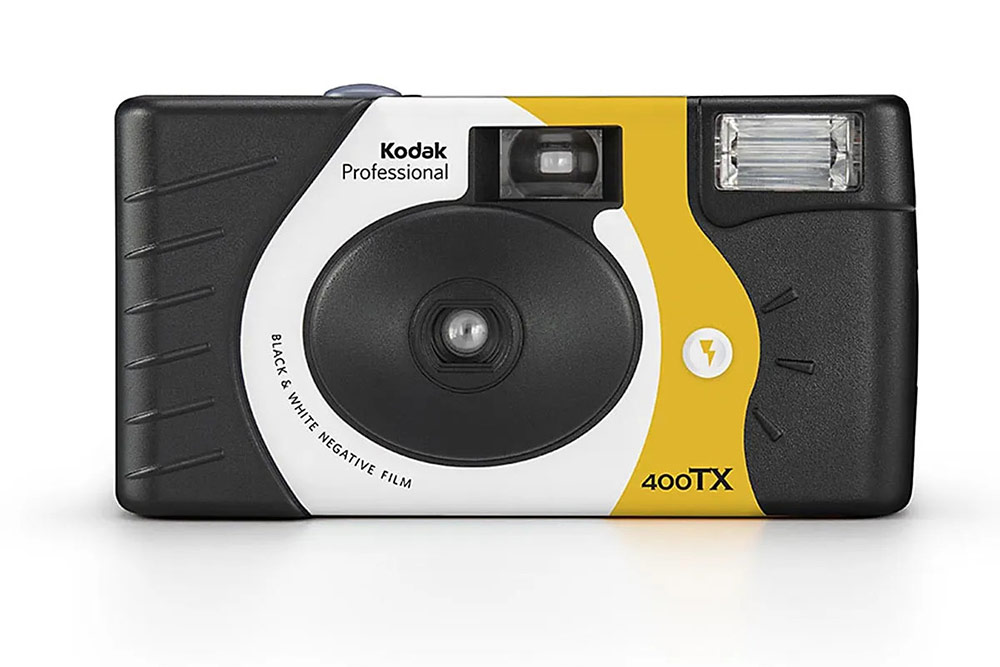 Loaded with high-contrast Kodak Tri-X 400 film, this is a black-and-white camera for those who like a little drama to their photography. With a good amount of grain and punchy tonality, it delivers memorable and interesting images, particularly on days with a lot of bright light and deep shadows. The quality of the 30mm optic on this camera is good too – not blow-you-away amazing, but definitely good enough to make the most of the film. Subjects tend to be sharpest at around 3 metres distance, so keep that in mind when composing. 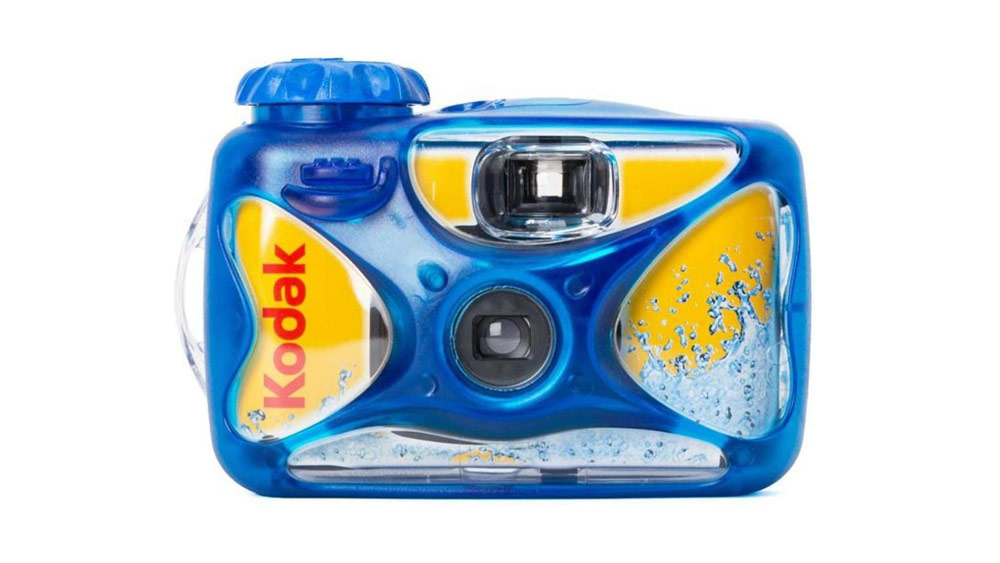 Ideal for shots by the beach, and at shallow depths in the pool, the waterproof Kodak Sport Underwater camera is a hard-wearing piece of kit. It has chunky control buttons and comes in a plastic case, making it ideal for use by kids. It’s best used in daylight and outdoors as there’s no flash. When shooting underwater, it performs well when the water is clear and bright. This model is not suitable for diving!

It can sometimes be hard to get your hands on this specific model as it often gets sold out, so a good alternative to bear in mind is the AgfaPhoto LeBox Ocean 400 Disposable. 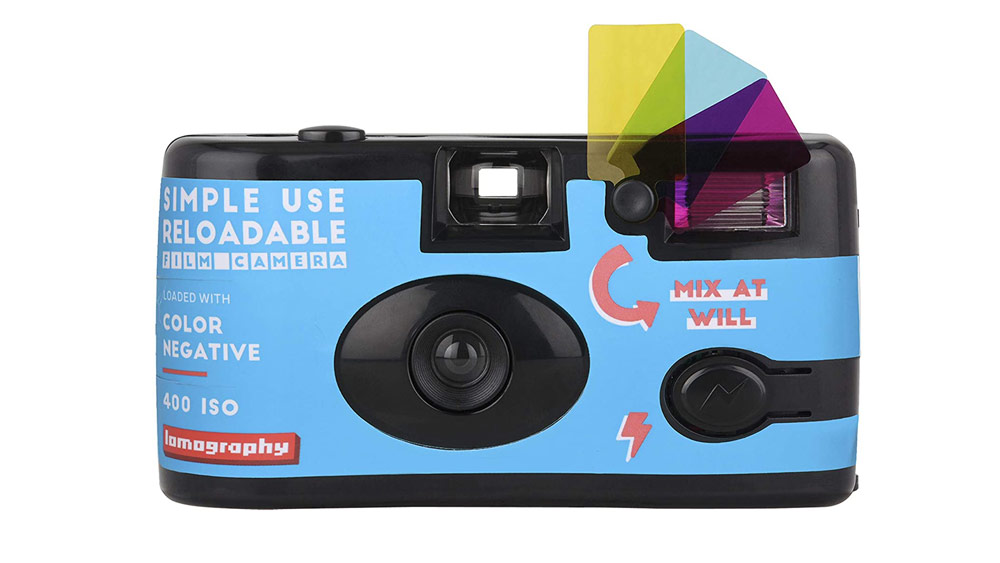 It may sound contradictory, but this is a reusable disposable camera: you can keep refilling the film, which makes it a more budget- and eco-friendly option to other disposable cameras on the market, if you’re planning on shooting more than the generous 36 shots included in the pre-loaded film. This is practical and economical as a new roll of film usually costs less than buying a whole new camera.

The camera body comes with three coloured gels that you can slide over the flash to give the images different tints and add more creativity to your analogue photography.

The shutter speed is quite fast – 1/120 – and so this camera can be used to capture fast-moving subjects. 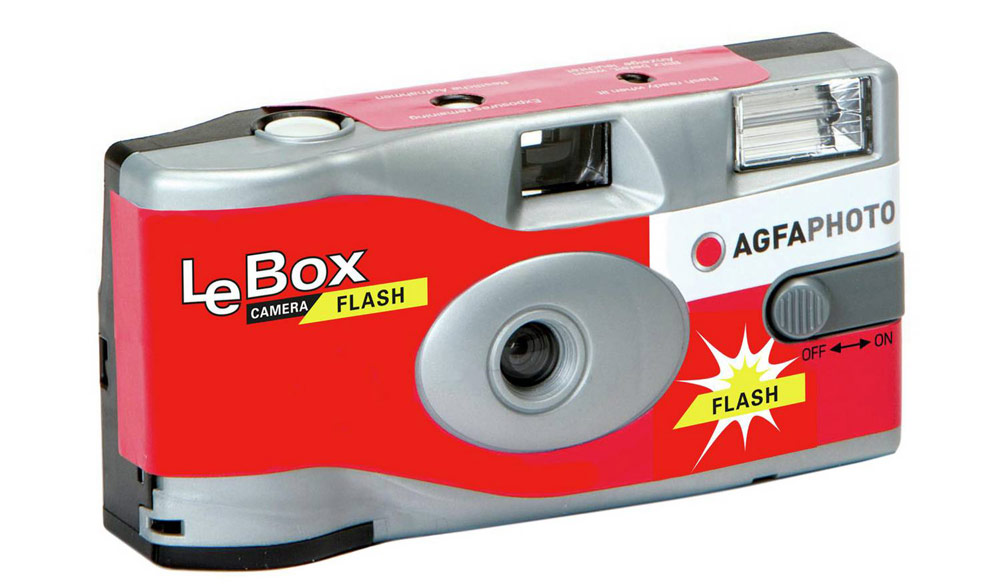 A compact and budget-friendly disposable camera that is easy to use and best of all, features a flash. It’s good for everyday scenarios, both indoors and outdoors. Cheap, cheerful and easy to spot, it’s a good one for kids who might be taking their first steps into non-smartphone photography. The flash is built-in, and exposures are generally pretty spot-on, especially indoors. 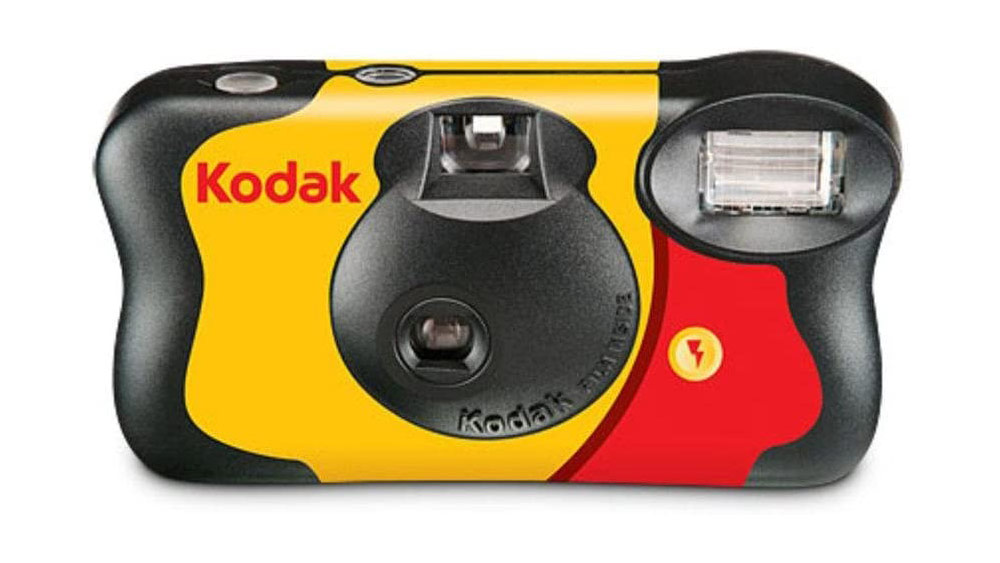 A versatile and reliable camera, the Kodak FunSaver performs just as well in bright sunlight and low light thanks to its high ISO. It’s a cheap option that produces brilliant results, ideal for beginners to the world of disposable cameras.

It comes preloaded with Kodak Gold film inside, so the tone of your photos will be warm and flattering. This disposable camera is common at weddings because it is available in multipacks and also has a 27-shot version and 39-shot version – a good one to stock up on! 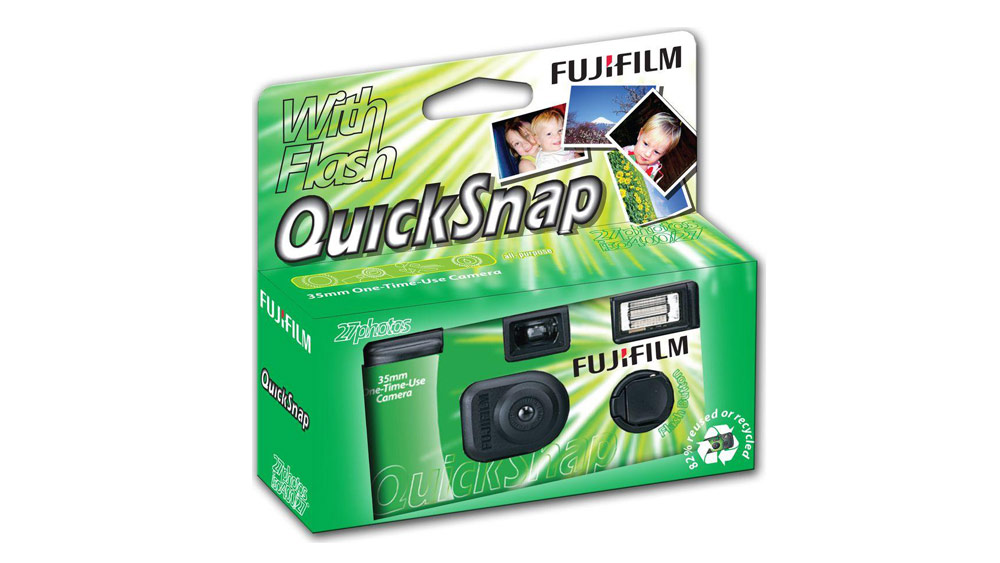 This camera has the most practical flash off the lot, because you don’t need to press the flash button for every shot but can just keep it on by toggling the continuous flash switch. This makes it ideal for quick-fire shots in low light scenes – you can focus on taking the photo without worrying about the light. Without flash, it works brilliantly in daylight. 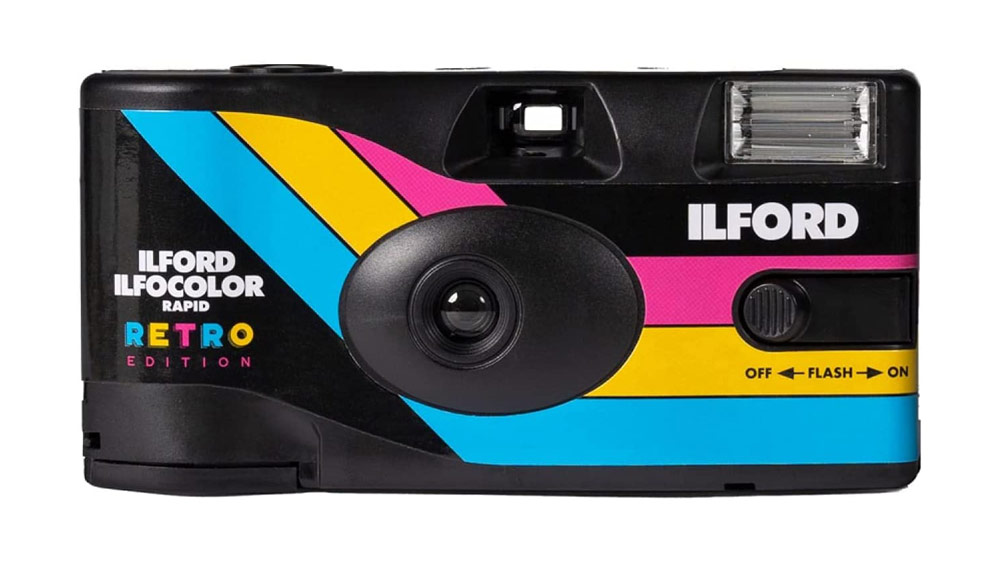 A retro-looking camera that’s lightweight, it works well indoors and outside and produces photographs in saturated tones. While Ilford is mostly known for its black-and-white film, this camera produces images in glorious poppy colour that feels as though it leapt straight out of the 1960s. It’s a fantastic choice for travel, producing memorable images with well-saturated tones.

Text by Kavi Shah, with contributions from Jon Stapley.