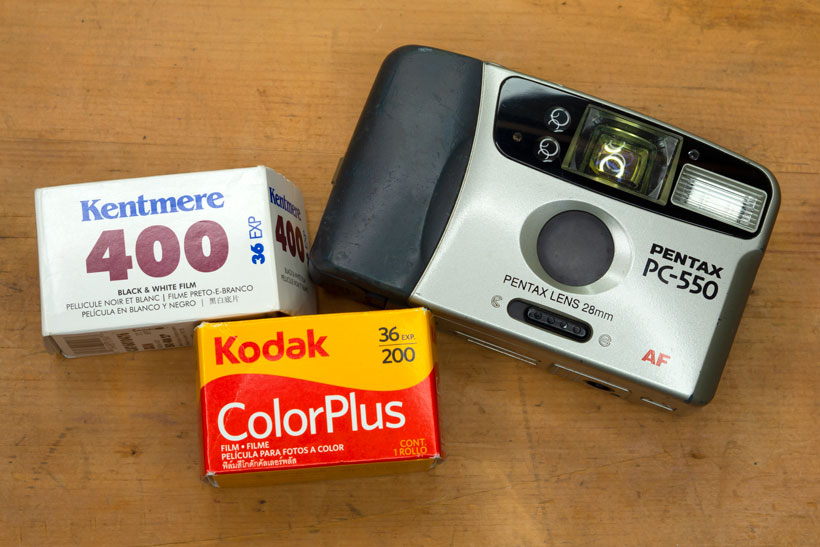 So, you’ve decided to pick up one of the best compact film cameras with autofocus? Good choice! Compact film cameras, also known as point-and-shoots, are a fantastic way to get into film photography. Easy to carry everywhere, they are ideal for travel, containing everything you need in one tidy package.

Compact film cameras aren’t being manufactured too often these days, which means your shopping is going to be confined to the second-hand market. Finding these cameras can often mean a little patience – it takes some hunting on eBay, and some hawk-like watching of second-hand retailers. For some, that’s all part of the fun.

However, to keep things simple, we’ve tried to pick cameras that are generally not too hard to find. Just bear in mind that you can expect availability and prices to fluctuate.

Also, if you’re new to eBay shopping, make sure you get a camera that is listed as working. Some are sold ‘parts only’ for very low prices, which means that the camera no longer works and is intended for scavenging or some other non-photographic use. Read the listing thoroughly before buying anything and make sure you know what you’re getting.

What is a compact film camera?

A compact film camera is defined pretty much the same way as a compact digital camera – it has a fixed lens that cannot be changed. This might be a zoom lens that can change perspective, or a prime lens with a fixed focal length. A good zoom gives you versatility, while a prime offers superior optical quality, which translates to sharper images.

The cameras on this list all have some form of autofocus – it won’t be as sophisticated as the systems on modern digital cameras, but if you’re new to photography, it’ll increase your chances of nailing the shot compared to a manual-focus camera.

As we’ll see, compact film cameras come in many different shapes – and at different price points. For this guide, we’ve included a mix of budget options and more premium compacts. Some are made from plastic, while others are more sturdily constructed. A built-in flash is a common feature.

Some of these cameras made in the latter years of film also have built-in LCD screens that give you information like how many shots you have left, and whether the flash is active. This electronic component can also mean they’re compatible with DX code – a reading system that allows the camera to automatically recognise the ISO speed of a roll of 35mm film, provided the film itself is DX-coded.

We mentioned earlier that these cameras are also referred to as point-and-shoots, and this gives you some insight into the design philosophy. They’re made for people who want a simpler shooting experience, and this is reflected in the fact that many offer little (or no) exposure settings control.

If you need more options, see our guide to the best 35mm cameras, and check out our rundown of how to do film photography on a budget if you’re looking to save some cash. Otherwise, let’s dive into the best compact film cameras with autofocus you can buy…

The best compact film cameras with autofocus – our full list 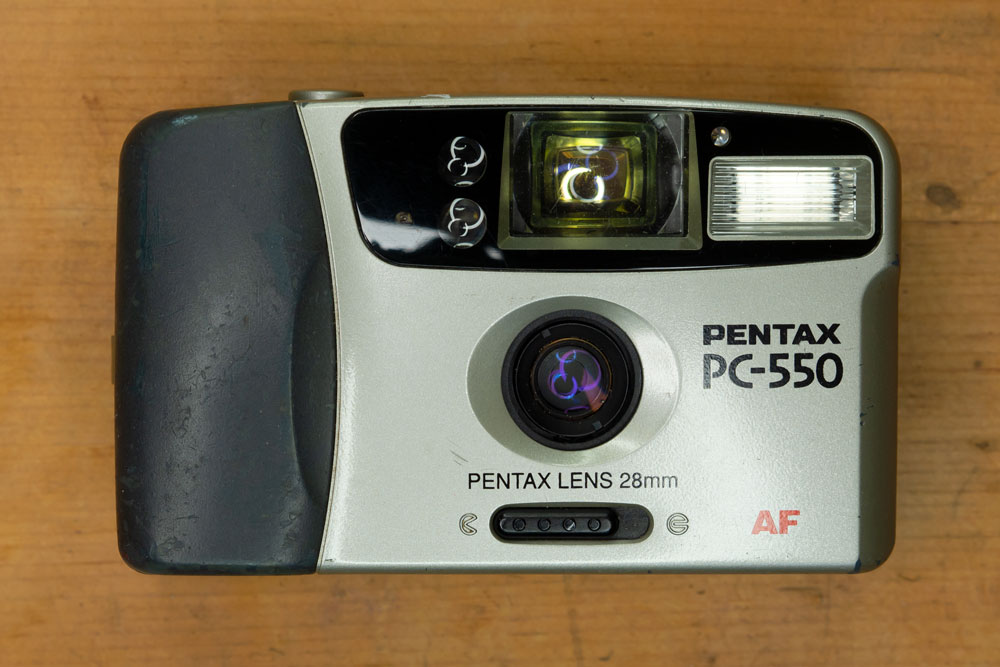 Cheaper than cheap, the Pentax PC-550 offers tremendous value for money and is an ideal entry point to fuss-free analogue photography. It’s got a fixed lens with a 28mm perspective, and a surprisingly decent little autofocus system for a camera at this price. Weighing just 152g, it’s a great camera for introducing a child to the fun of film photography. The generously sized viewfinder makes for an immersive shooting experience. 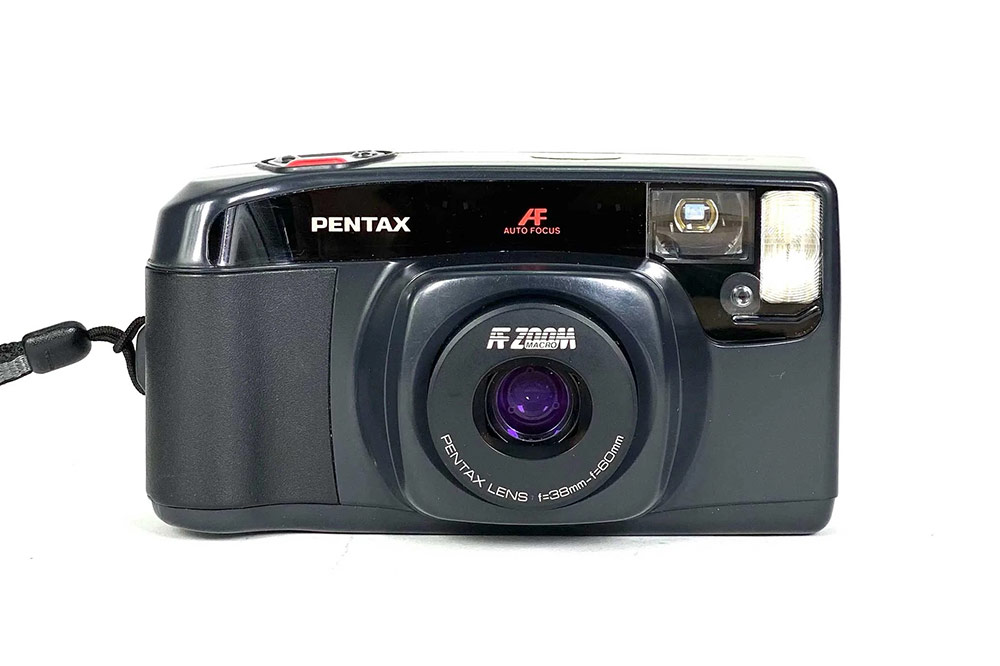 Film photographers don’t tend to give much credence to Pentax’s Zoom AF series of compacts (also known as IQZoom). We think they’re missing a trick. These cameras aren’t as stylish as those made by Contax or Olympus, but they work, they offer zoom functionality, and models like the Zoom 60 will cost you practically nothing.

Having a 30-60mm zoom lens gives you decent compositional flexibility, and this particular model also has a macro mode, which allows you to get as close as 0.54m and still get the subject in focus. At this price, that’s excellent.

The Pentax Zoom 60 has its quirks. It’s too big, for one, and its shutter is so quiet that when the flash doesn’t fire, it can be hard to tell whether you’ve actually taken a photo (the LCD readout is a lifesaver there). Also, bear in mind that you’ll need to source the slightly unusual CR-P2 battery pack to power it. This will add an extra £5 / $7 or so to the price. 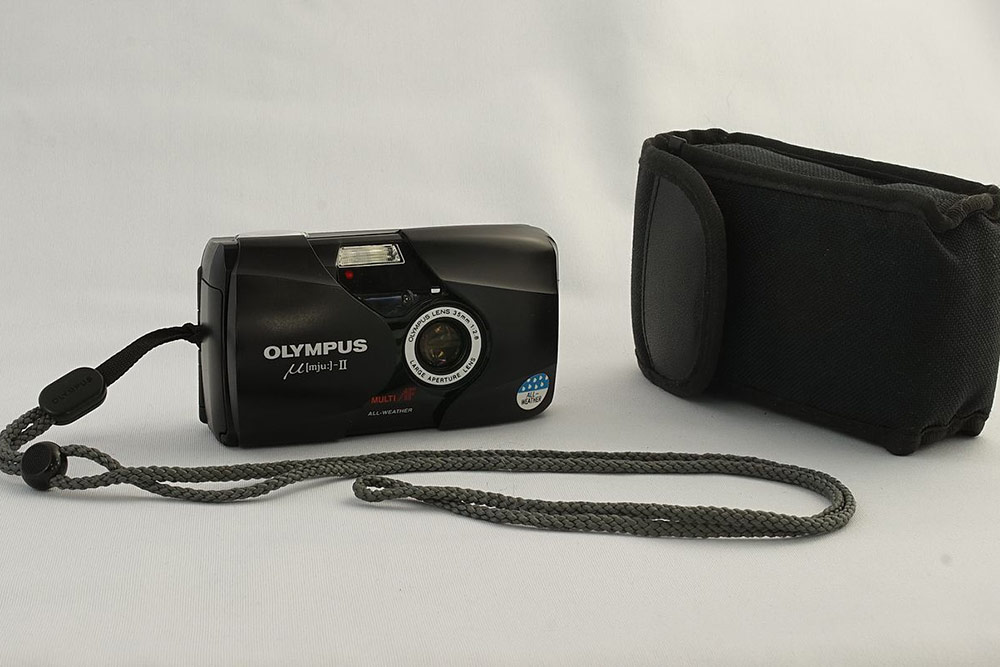 The Olympus Mju cameras, or the Stylus Epic series as they were known outside of Japan, were hugely popular in Japan in the 1990s, and have held onto a fanbase to the present day.

The Olympus Mju II is probably the best of the bunch – equipped with a sharp 35mm lens that can focus as close as 0.35, and it acquires focus rapidly thanks to its active multi-beam autofocus system. It also has impressively consistent metering for a camera of this type, with an almost preternatural-seeming ability to nail the shot in all situations.

It is a little plasticky in the build, feeling a bit less solid than other comparable point-and-shoots. Be aware that the battery compartment latch can break. Also, its enduring popularity means that it tends to be a little overvalued, going for street prices just a few notches above what it probably deserves. Still, that sharp lens is an enduring winner, and for many photographers, this do-everything camera will justify a slightly inflated price tag. 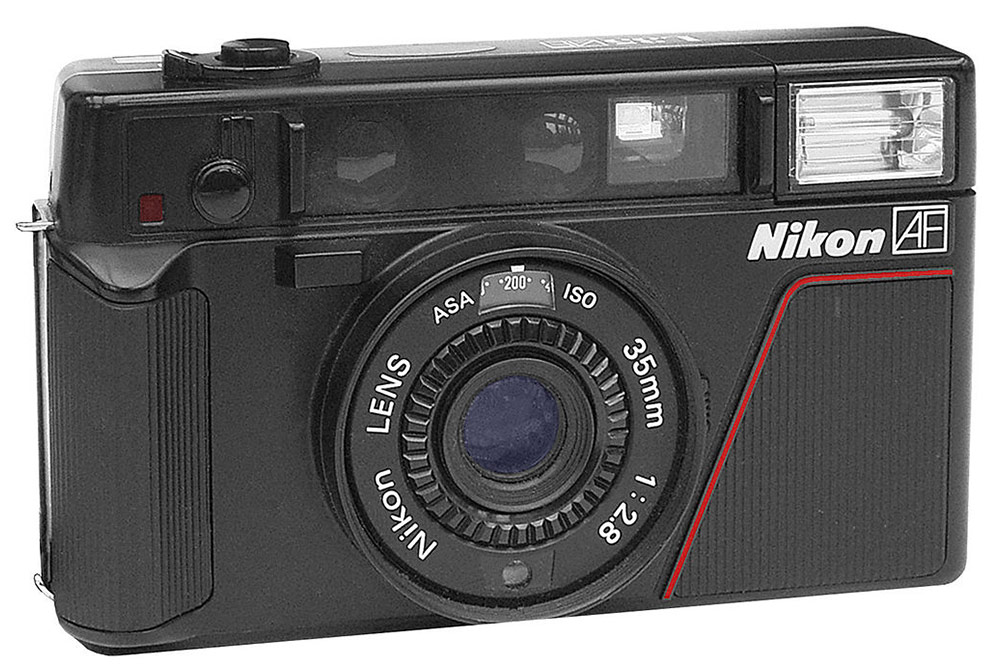 The Nikon L35AF’s lack of aesthetic flair is possibly why it’s one of the less famous compact film cameras, but in its quiet way, the Nikon L35AF is one of the best value buys you can make. It’s entirely powered by common AA batteries, which is a refreshing change from the hard-to-find specialty batteries that other film cameras tend to require, and it’s robustly designed with a metal chassis. The lens is high-quality too, delivering consistently sharp images.

Exposure is mostly automatic – you point, and you shoot – however, Nikon did include one clever manual control in the form of an exposure compensation lever. If you’re shooting a backlit subject, and suspect you might need a little extra juice, simply depress the lever to give yourself two extra stops. It’s simple, but effective. Otherwise, control is a bit of a patchwork affair – even the official manual recommends covering the exposure meter with your finger in certain situations. 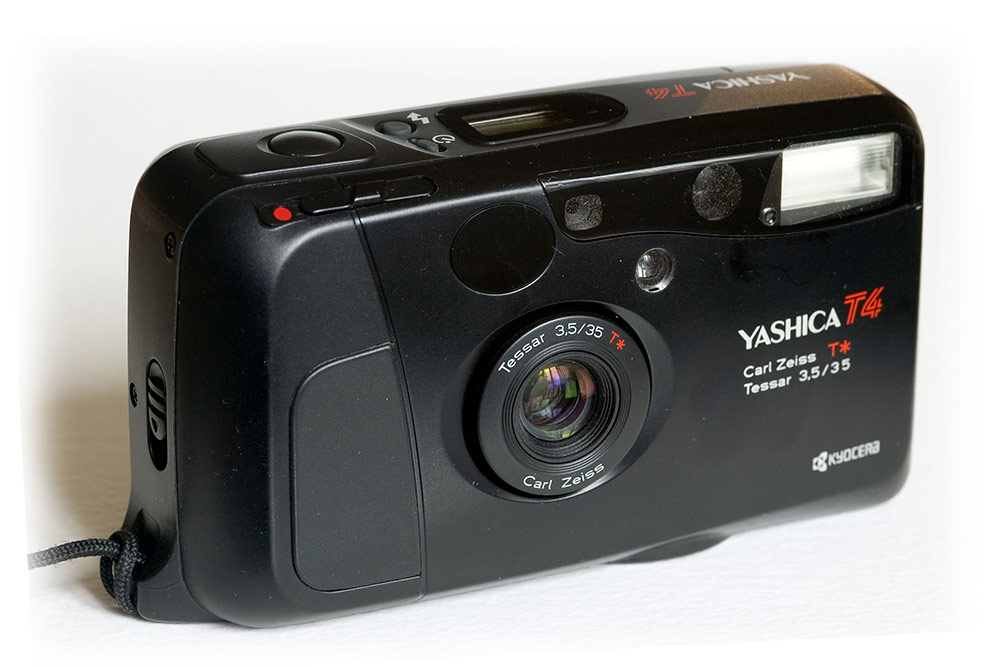 The blocky Yashica T4 is a no-nonsense compact film camera, in a way that will attract some users and repel others. It’s not much of an aesthetic object, looking and feeling like a small plastic breezeblock. However, its fundamentals are solid, with a four-element Carl Zeiss lens in a do-everything 35mm focal length. The autofocus system is a three-point affair that works quickly and quietly. Indeed, in terms of time from pocket to shot, the Yashica T4 is probably one of the fastest guns in the west.

With automated exposure (there are only three buttons), you’re not going to be fiddling with settings. You can’t even manually set the ISO – the T4 relies on DX coding – meaning this isn’t one for those who like to push/pull their film in development. One other thing to be aware of is that the T4’s flash absolutely loves to fire, even in bright conditions, and is a pain to switch off. Many users simply learn to embrace it. 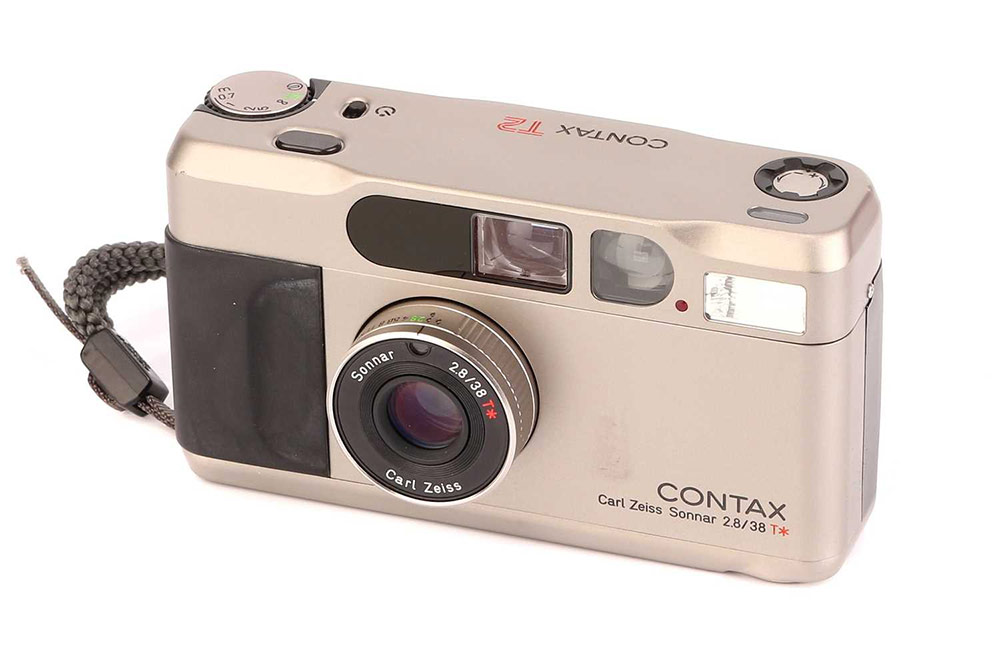 Okay, so, we’re going to say something you might not have expected to see in a buying guide like this one – you probably don’t need to buy the Contax T2. It’s way too expensive, commanding prices online that can and do reach four figures. There’s simply no reason for the vast majority of film shooters to spend that much on their camera.

The thing is, though, that the Contax T2 is an institution. You can’t write up a guide to the best compact film cameras and not talk about it. Its big hook is the high-quality Zeiss Sonnar 38mm f/2.8 lens on the front, which makes it competitive with much more expensive Leica kit. The image quality you get with this thing is sublime, and its premium titanium construction means it’s built to last.

Is it overhyped and overvalued? Sure. But it’s a beautiful camera, and we couldn’t live with ourselves if it didn’t find a place on this list.

Why are compact film cameras so expensive?

Anyone who has seriously looked into buying a compact film camera has almost certainly muttered this question under their breath at some point. Many point-and-shoot cameras are commonly listed on eBay for significantly larger sums than they would originally have been sold for, even accounting for inflation. There’s no one simple explanation, but rather a number of factors that come into play:

They’re not being made any more. This might seem a bit obvious, but it’s a pretty significant part of the equation. Contax T2 cameras are no longer running off the production line, and they aren’t going to. This means, as they continue to be desirable objects, we can expect prices to remain high.

Interest in film has surged. There’s been a noticeable uptick of interest in film over the past few years, especially as younger people on Instagram start to discover the joys of analogue shooting. Buying film cameras online has become noticeably more competitive than it once was – which naturally drives prices up.

They’ve become status symbols. As we’ve seen, many compact film cameras are just downright cool-looking. This and their rarity has piqued the interest of a fair few celebrities – even younger stars like Tom Holland and Zendaya have been seen toting Contax point-and-shoots. All this fuels the status of compact film cameras as desirable things to be seen with – and you can probably guess what this does to prices.

They’re well-made and built to last! It’s not all about the cool factor. It’s worth emphasising that many of the compact film cameras you’ll see being sold online have been working for years, even decades, and if properly cared for will work for decades longer. It’s one thing that’s worth remembering when asking yourself why compact film cameras are so expensive – a lot of the time, it’s because they’re worth it!

How to check if a film camera works

A beginner’s guide to film photography

How to do film photography on a budget

Jon has been writing features and reviews for Amateur Photographer for more than a decade. His writing has also appeared at Digital Camera World, Black + White Photography magazine, Photomonitor and many more. He's an avid film photographer, despite the expense, and has contributed a few features to AP on how to shoot film on the cheap. See more at jonstapley.com.