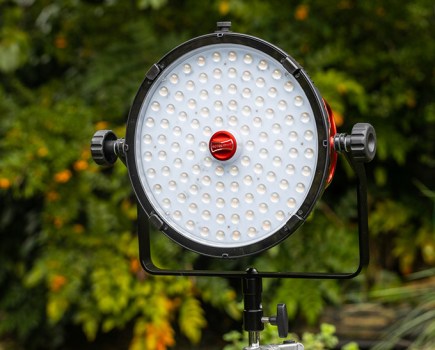 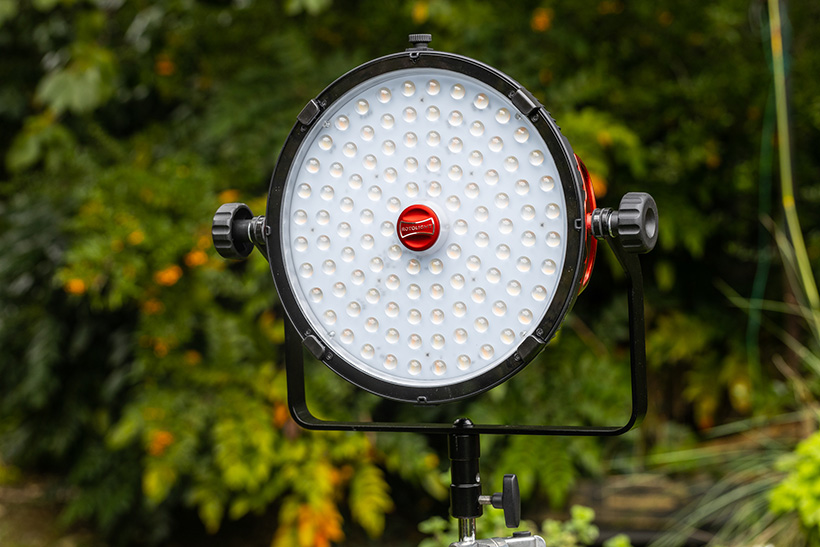 Rotolight AEOS 2 PRO at a glance

Like its smaller sibling, this light was developed on the back of customer feedback. With a diameter of 30 cm the AEOS 2 PRO has a lighting surface area four times that of the NEO 3 PRO, giving greater coverage and a softer light at shorter distances.

However, if your subject is close to a plain, pale background, then stepped shadow edges are evident, which is common with all luminaires that use multiple LEDs. The further you move the light from your subject the deeper the shadows and harder the shadow edge transition. Adding the diffuser dome creates shadow transition similar to a white shoot-through umbrella.

In terms of features, the AEOS 2 PRO is essentially the same as the NEO 3 PRO. Whilst it has ¼ inch threads for mounting onto light stands or other grip gear, there is also an optional yoke available for convenient direct connection to standard ⅝ inch mini-pin light stands.

In a world first, Rotolight has developed the SmartSoft, an electronic diffuser that allows the degree of diffusion to be controlled remotely from the Rotolight iOS and Android app. It’s not included with the light but can be bought as an optional accessory for £439. There are also two new 16-sided soft boxes, the R90 and R120. This light, along with the NEO 3 PRO, may be used with them in conjunction with a special bracket. The AEOS 2 PRO fills the soft boxes giving more even light than the smaller NEO 3 PRO. 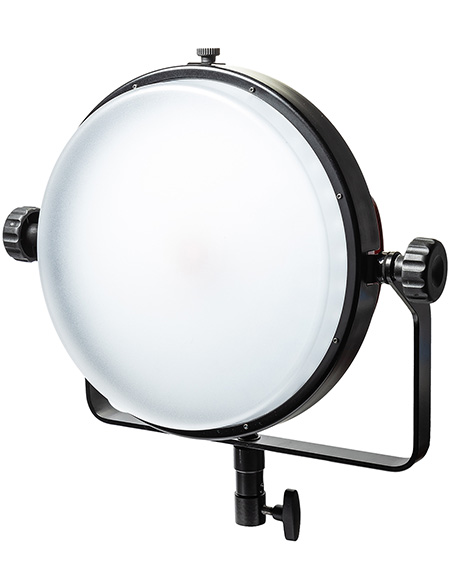 In a world first, Rotolight has developed the SmartSoft, an electronic diffuser that allows the degree of diffusion to be controlled remotely from the Rotolight iOS and Android app.

A standard 14.8 Volt V-lock battery supplies portable power. Rotolight’s own V-lock batteries are rated at 155 Wh giving extended life, especially as the AEOS 2 PRO draws about a third of the power than the nearest competitor. Other brands of V-lock battery can be used providing they exceed 135 Wh in capacity.

Under the SFX button you’ll find an award-winning suite of CineSFX™ (Fire, Lightning, TV, Gunshot, Paparazzi and more). These a perfect for changing the mood of a scene and adding drama to your moving images at a moment’s notice. As with the CCT, Gel and HSL features you can customise, save, and instantly recall your favourite settings as presets for convenience. 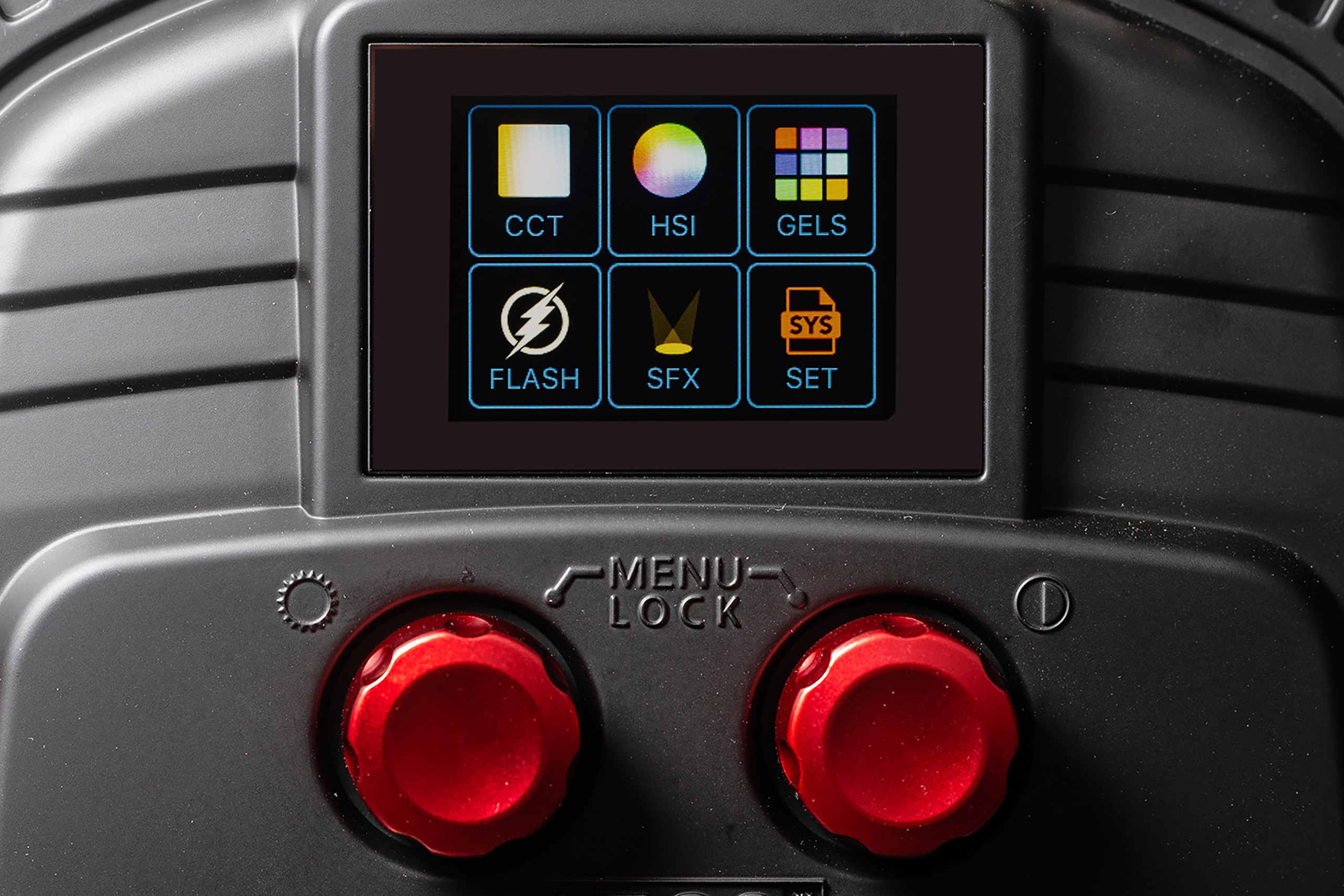 When the light is being used, some heat will be generated, but little compared to incandescent hot lights. However, there will be a point where the unit’s cooling fans kick in, so videographers need to be wary in case this impacts their soundtrack. At higher output levels the fans the start up after around 6 minutes. Initially they start at a low level, but with continued use at high output, the fans do become louder.

When the output level is reduced to 50% the fan noise decreases and ultimately stops. When running the AEOS 2 PRO at 75% the fans will kick-in at a level so low to be almost indiscernible. 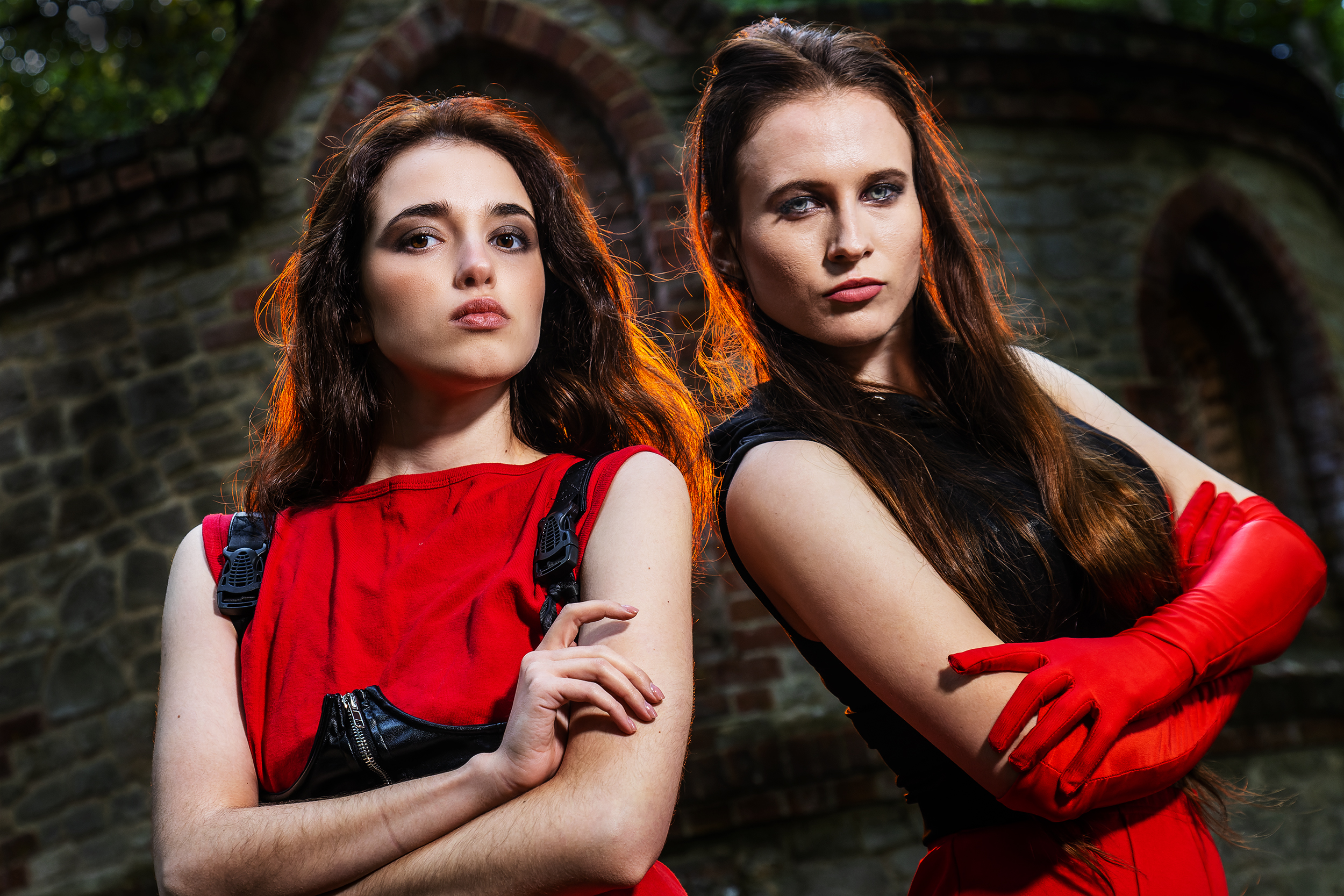 Whilst the AEOS 2 PRO is not an inexpensive light, it’s versatile with a potentially long working life. It’s thin enough to fit into a 15-inch laptop compartment with the diffuser, yoke and battery removed. This is a light which I am sure will be adopted by many wedding and portrait photographers, especially those who offer still and moving image packages. For film makers and video photographers this is a package of pure convenience that’s ideal for both studio and location work. 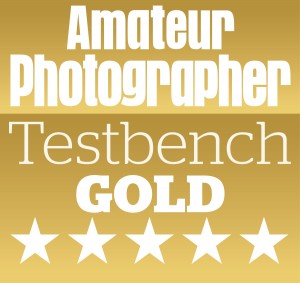