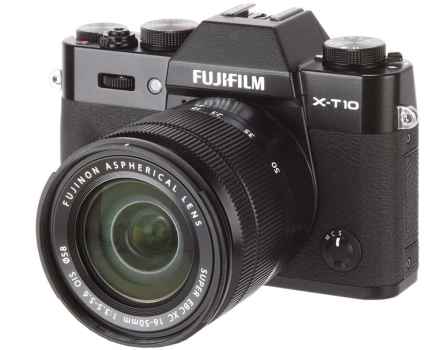 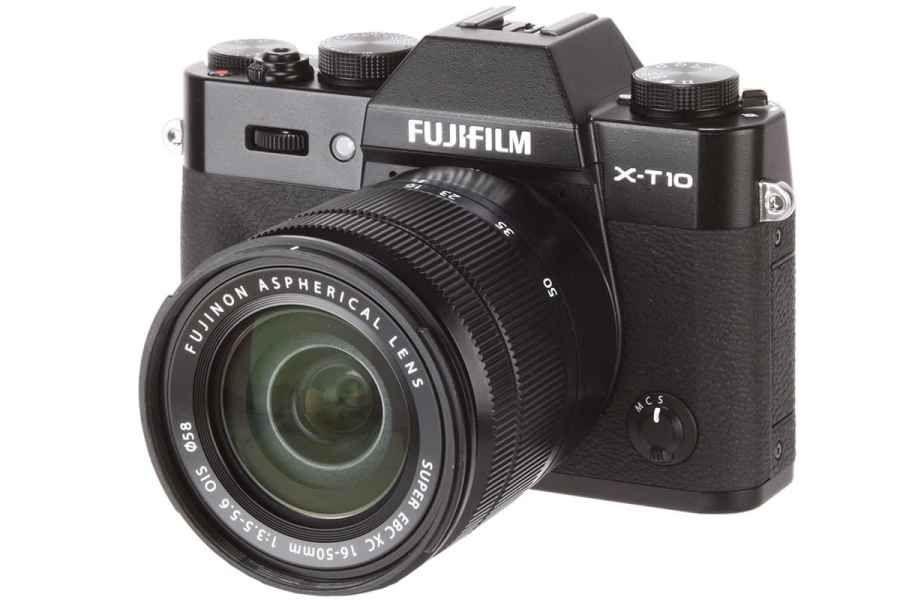 There’s little doubt that the Fujifilm X-T1 was one of the standout cameras of last year. Lauded by reviewers and users alike, it won numerous awards, including our own Premium Compact System Camera of the Year and, crucially, our Reader Product of the Year in the 2015 AP Awards. Now Fujifilm is aiming to follow up its success with a simplified, more affordable model – the Fujifilm X-T10. Available in a choice of black or silver finishes, it will be available from June for £499 body only, £599 with the XC 16-50mm f/3.5-5.6 lens, or £799 with the XF 18-55mm f/2.8-4 lens.

While it has a similar SLR-like design to the X-T1, the X-T10 is a noticeably smaller camera that’s closer in size to Olympus’s OM-D E-M10 – a very similar camera with which it will doubtless be closely compared. Like the E-M10, it hides a pop-up flash at the front of its viewfinder prism, and forgoes the weather-sealing of its higher-end sibling. However with Fujifilm’s familiar 16-million-pixel X-Trans CMOS II sensor (that includes on-chip phase detection pixels for focusing), EXR Processor II, and Film Simulation colour modes, it promises to offer the same excellent image quality as the X-T1. 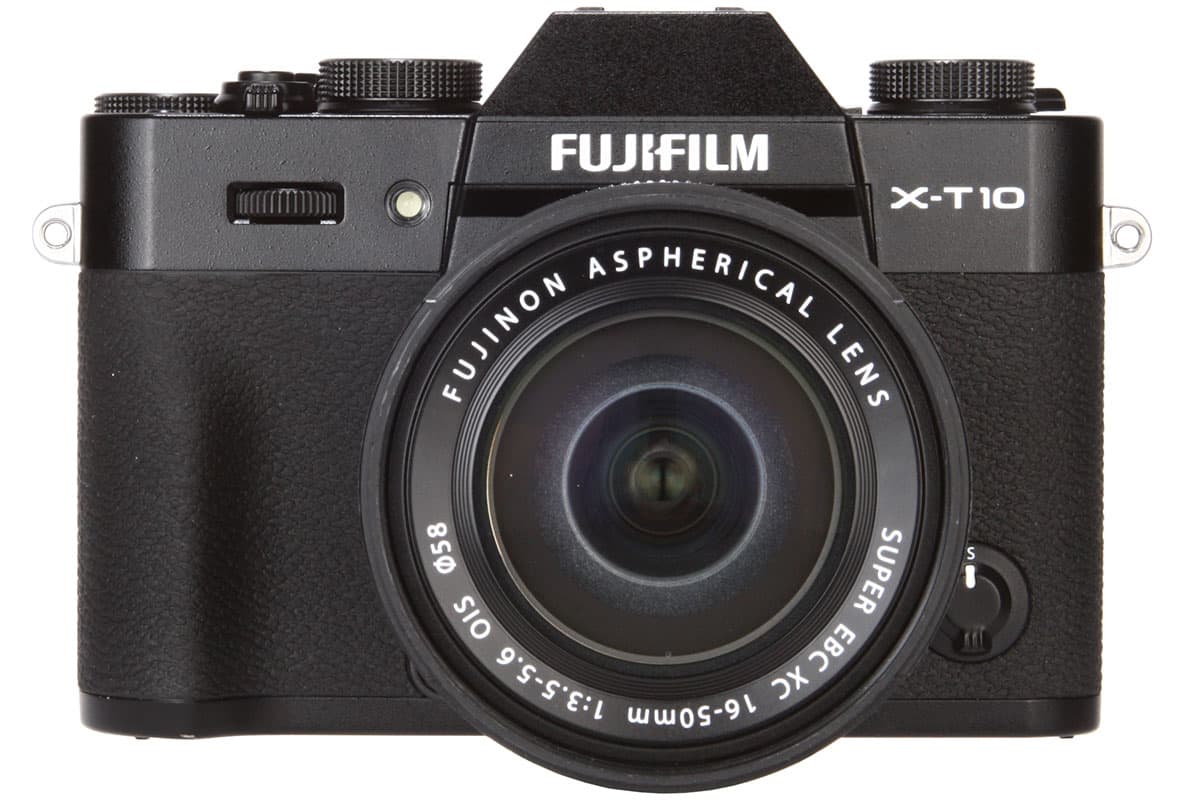 The X-T10 offers an impressively broad feature set, with a specification that would have looked outlandishly advanced just a few years ago. The sensitivity range covers ISO 100 to 51,200, although raw format recording is frustratingly restricted to the ISO 200 to 6400 range. Continuous shooting is available available at 8 frames per second, with continuous autofocus during shooting. In this regard the X-T10 also debuts a brand new AF system which features major enhancements for shooting moving subjects, that will also be available for the X-T1 via a major firmware update. I’ll cover this in more detail later.

Shutter speeds range from 1/4000sec to 1/30sec plus bulb when using the conventional mechanical shutter. However a fully electronic shutter allows the top end to be extended to a staggering 1/32000 sec (with a minimum of 1 sec), allowing shooting with fast lenses wide open in bright sunlight without any need for a neutral density filter. The electronic shutter is also completely silent, which is great in situations where the clack of a mechanical shutter would be intrusive. However it can potentially show rolling shutter effects, with distortion of moving subjects. A menu setting allows you to choose whether to use the electronic or mechanical shutter, or allow the camera to switch between the two as required. 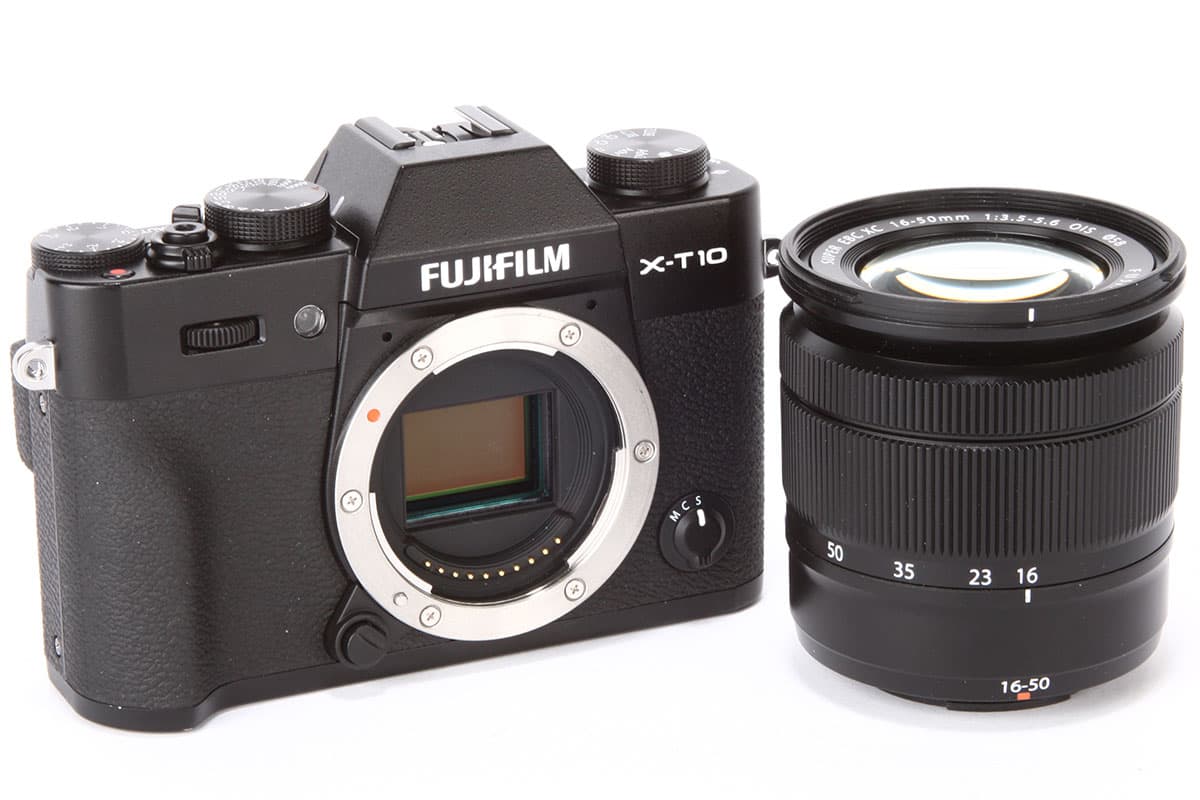 With Fujifilm’s X mount, the X-T10 gives access to the company’s excellent Fujinon lens range, along with a smattering of third party options from Zeiss and Samyang. It’s worth bearing in mind, though, that while the X lens range has acquired an enviable reputation for optical quality, it has a less enviable reputation for being distinctly expensive. However Fujifilm has recently shown a 35mm f/2 prime that looks like it is designed to be the start of a more affordable line of budget lenses, which could be perfectly targeted at potential X-T10 owners.

As previously mentioned the X-T10 uses the same X-Trans CMOS II sensor and EXR Processor II as other current X-series models such as the X-T1 and X100T, so we’d expect it to give essentially the same image quality. It includes Fujifilm’s excellent Film Simulation modes, giving particularly attractive colour rendition in JPEG files, and in-camera raw conversion allowing re-development of your images after shooting with control over a full array of image processing parameters including white balance and colour mode. 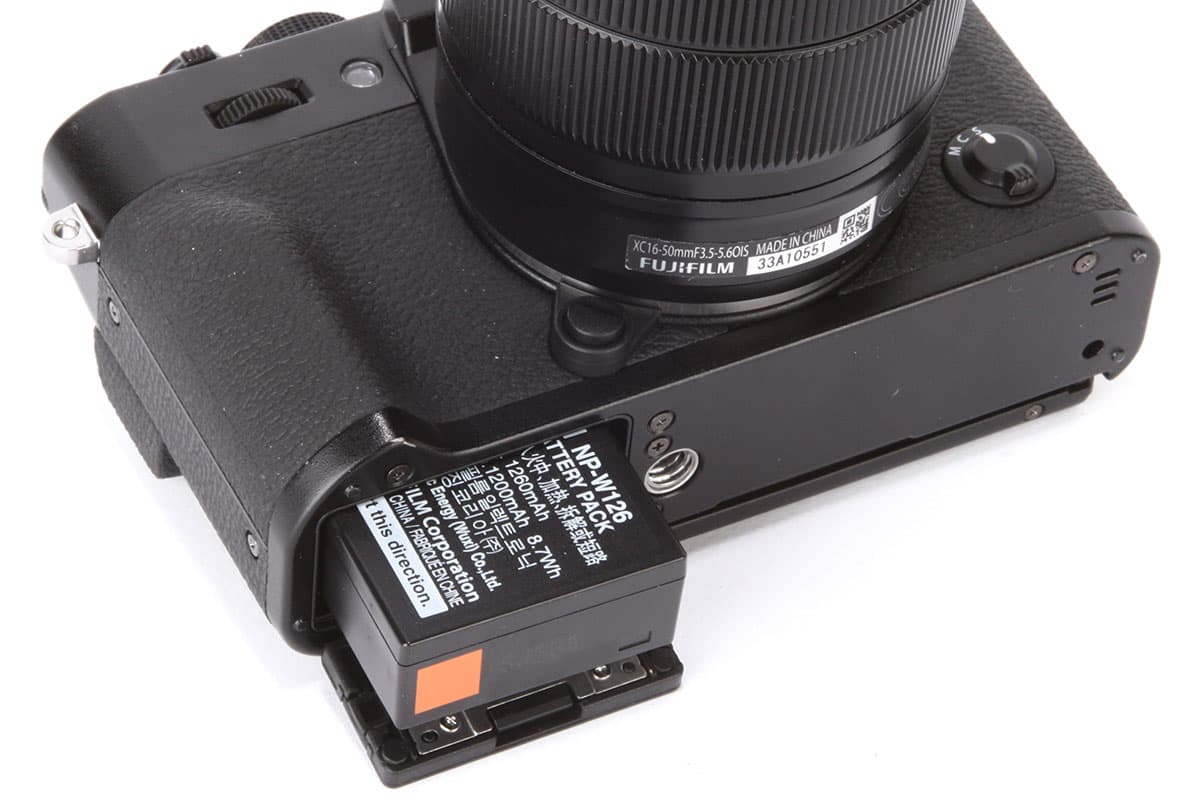 As we’d expect in 2015, the X-T10 has built-in Wi-Fi for connection to a smartphone or tablet. This allows remote control of the camera with a live view display on the smart device, which is perfect for shooting on a tripod, for example with the camera at odd angles. It’s also possible to transfer images to your phone for sharing online. Fujifilm hasn’t gone with this year’s fashion of including an NFC chip for easy setup, but its implementation of Wi-Fi makes connecting the camera to the phone extremely straightforward anyway, so this is no real loss.

Of course Full HD movie recording is available, at up to 60fps and with full manual control over recording. The camera has built-in stereo microphones, along with a 2.5mm stereo socket for an external microphone. A dedicated red record button on the top plate initiates recording at any time, but can be re-purposed to another function if you prefer. 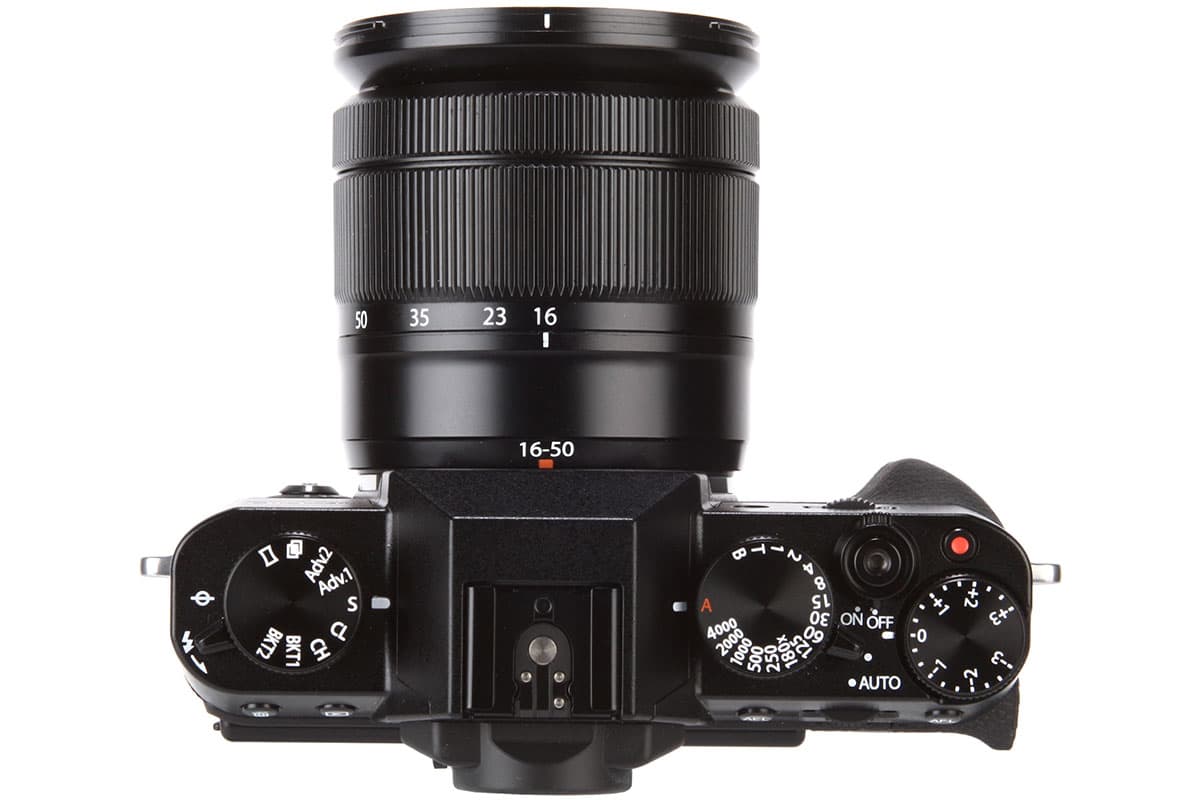 With its SLR-like design, the X-T10 most obviously looks like a slimmed-down, simplified X-T1. But it could equally be seen as re-arranged X-E2, with the viewfinder moved from the left side of the body to the centre, and a tilting screen added. With the three cameras side-by-side, the X-T10 is the slimmest, but a little taller than the X-E2 due to the central finder hump.

In typical Fujifilm fashion the X-T10 is based around traditional analogue controls, with top-plate shutter speed and aperture dials complemented by an aperture ring on most Fujinon lenses. These are joined by a top-plate drive mode selector and two electronic control wheels, but sadly no ISO dial. Unlike with the X-T1, none of the dials are lockable. 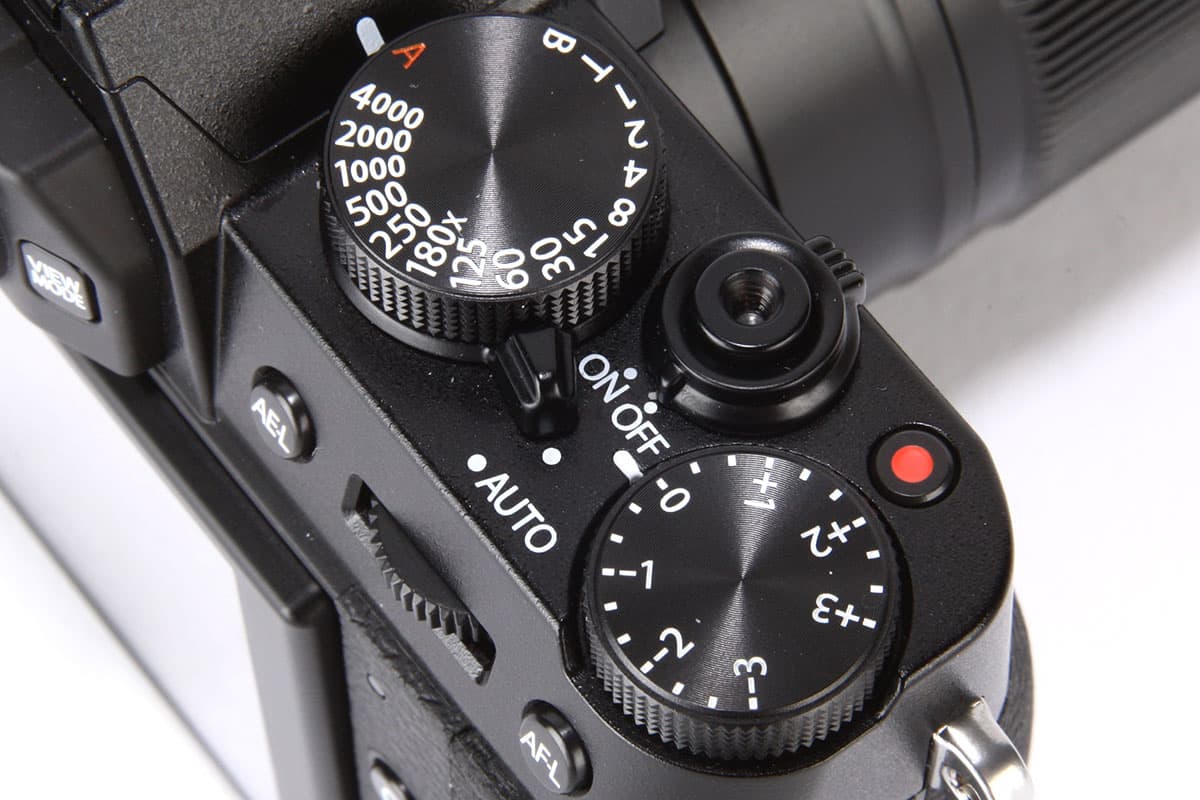 One new control is a top-plate mode switch beside the shutter speed dial. Flicking this to the Auto position puts the camera into its Advanced SR Auto mode, from which you can also access an array of scene-specific modes. In its forward position, marked only by a dot, you get access to the standard set of program, aperture priority, shutter priority and manual exposure modes. 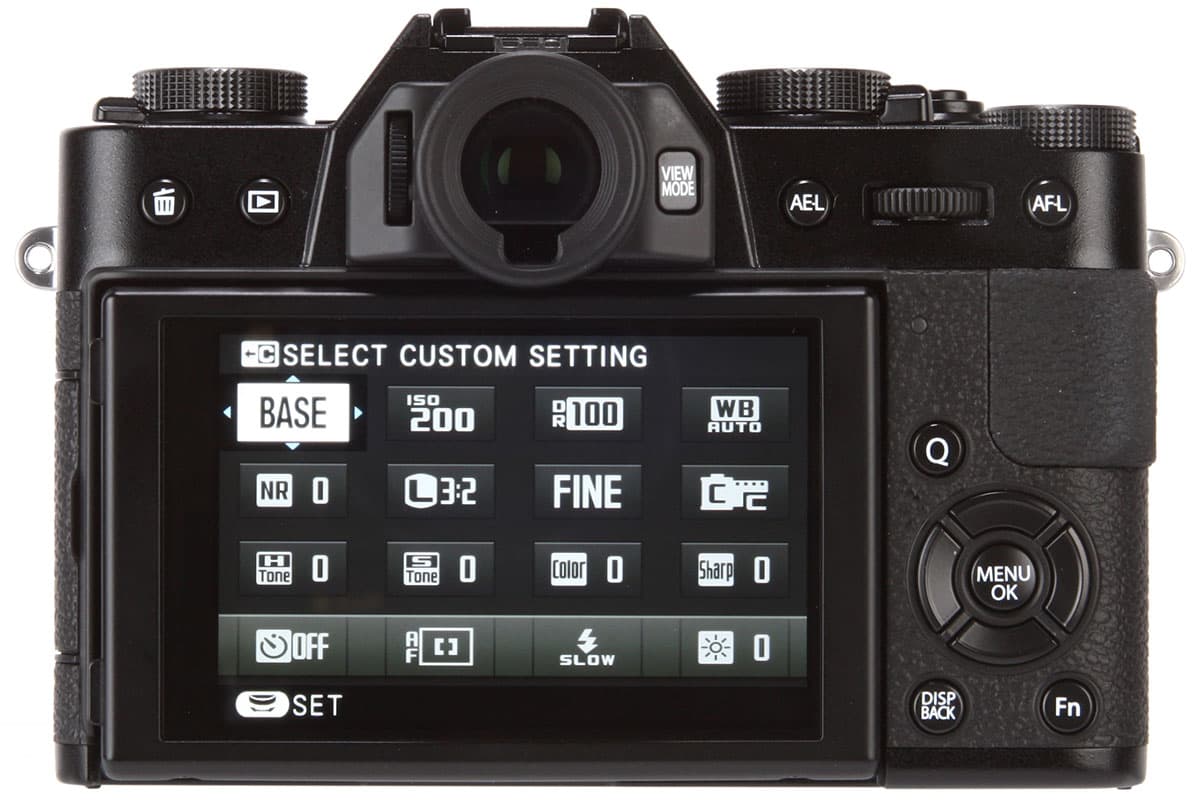 Aperture is normally set by a ring on the lens, but certain Fujinon lenses lack this control, including the XC 16-50mm kit zoom. In this case, aperture is set using the rear control dial. Exposure compensation is applied using the top-plate dial, to +/- 3EV in 0.3 EV steps. ISO sensitivity doesn’t have its own dedicated control, but can be assigned to a function button, or set via the onscreen Q menu which gives quick access to 16 user-selectable settings.

Both electronic control dials can also be clicked inwards to function as buttons, with the rear dial engaging and switching between manual focus aids. Alongside magnified live view, the X-T10 has a peaking display that highlights in-focus edges of the subject, along with Fujifilm’s unique digital split image display. 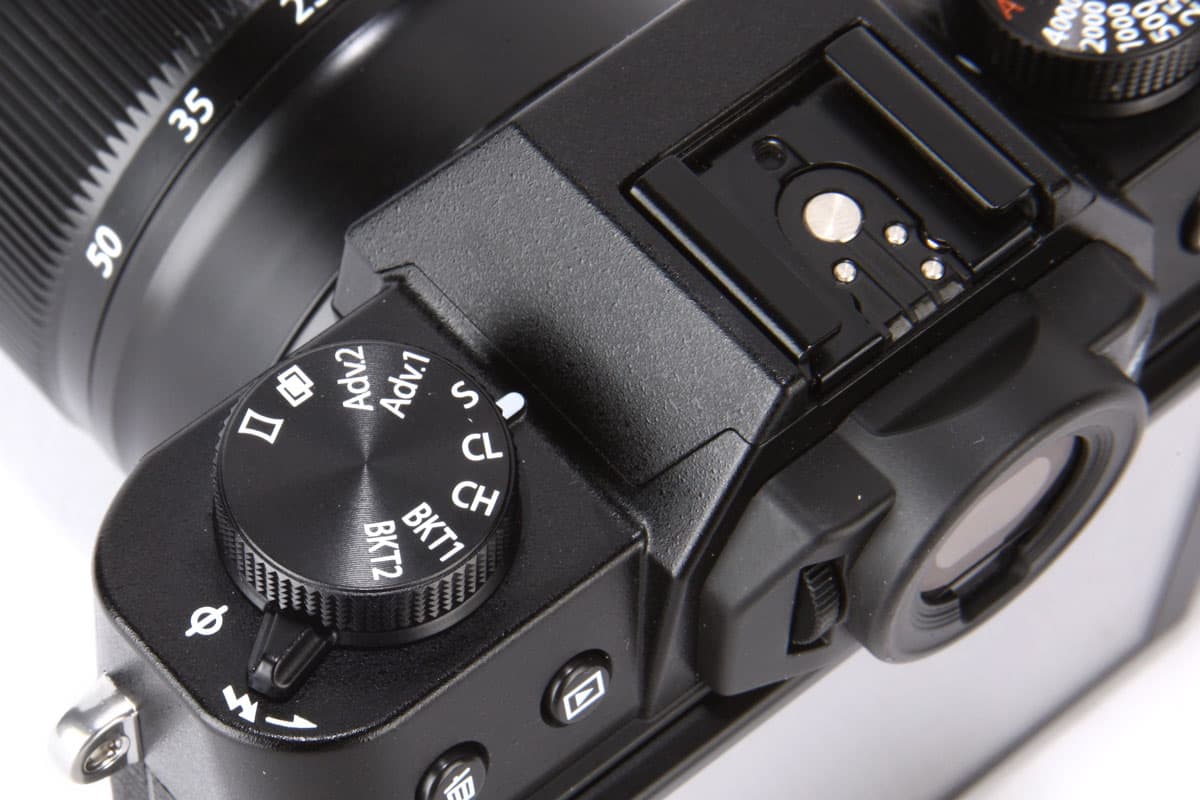 By default the clicking the front dial switches between AF area modes, but this is user configurable. Indeed it’s just one of seven user-customisable controls, along with the top-plate video button, the four buttons of the d-pad, and an additional rear Fn button. It’s possible to assign the d-pad to move the AF area directly around the frame, giving a particularly fluid way of working with the electronic viewfinder.

With a boxy, high-shouldered design the X-T10 can look a bit odd from some angles, especially front-on, but it brings some real ergonomic advantages. The tall body gives both more space for controls, and more room for your right hand to grip. Indeed with a cleverly-sculpted front grip, rear thumb hook and grippy rubberised coating, the X-T10 feels impressively secure in-hand for such a small camera. With die-cast magnesium alloy top- and base-plates and aluminium dials, build quality feels solid enough, if not quite up there with the bomb-proof X-T1. 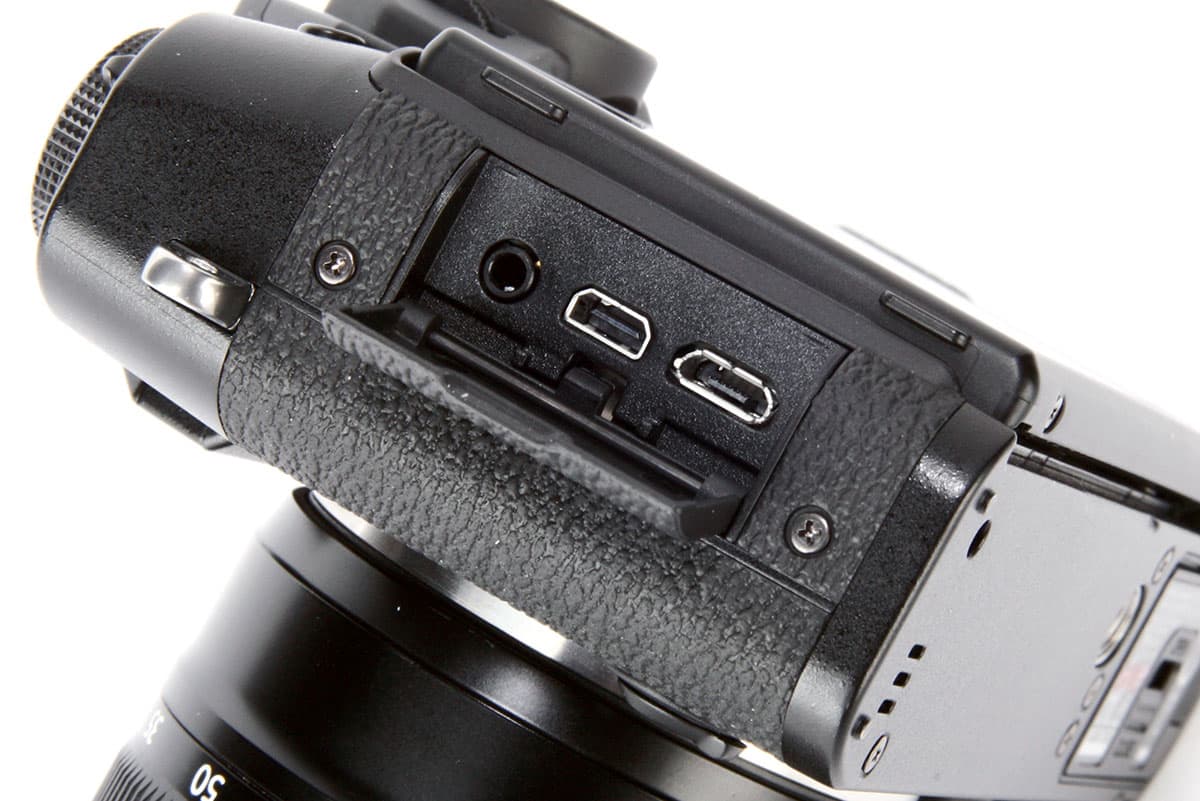 Under a flap on its left-hand side, the X-T10 has USB and HDMI connectors, and a 2.5mm stereo microphone socket. This also accepts Canon-and Pentax-compatible wired remote releases, while the USB socket takes Fujifilm’s own RR-90 electronic release. In addition, a traditional mechanical cable release can be screwed into the shutter button. If none of this is high-tech enough for you, remember it’s also possible to control the camera over Wi-Fi from your smartphone. 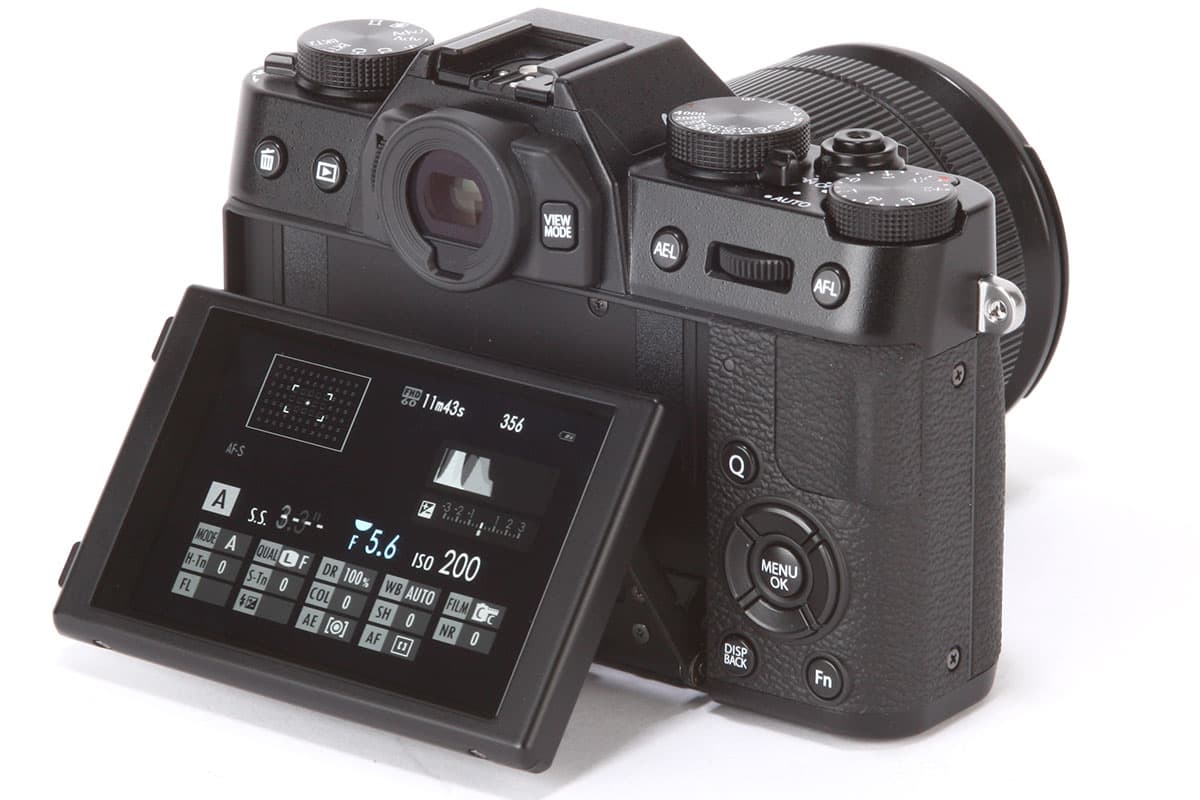 The X-T10’s centrally-placed electronic viewfinder is the same 2.36M-dot OLED unit previously seen on the X-E2, that offers 0.62x magnification and 100% coverage, which means it matches the best DX format DSLRs for size. It has dioptre adjustment, and an eye sensor that can be used for automatic switching with the rear screen. The viewfinder shows extensive exposure information, including an electronic level and live histogram, and the information display rotates when shooting in portrait format.

The rear screen is a 3-inch, 920k-dot LCD that tilts upwards by 90° for waist-level shooting, and downwards by 45° for high-angle shots. However like all tilt-only screens, it becomes much less useful when shooting in portrait format. Incidentally it’s not touch-sensitive.

The X-T10 gets the same AF system as announced in Firmware V4 for the X-T1 (left), which is a considerable advance over that used in previous models like the X-E2 (right)

Notably, the X-T10 comes with the same advanced autofocus system built-in as Fujifilm recently announced in a firmware update for the X-T1. For static subjects this employs Fujifilm’s familiar 49-point grid covering most of the frame, with the AF area size user selectable in five steps to match the size of the subject. However it adds eye-detection AF for portraits, aong with sophisticated new modes for continuous focusing on moving subjects – a weakness of previous X-system models.

First is a new Wide Tracking mode, that uses an expanded 77-point grid covering effectively the entire sensor. This is designed to track subjects that are moving across the frame, and keep them in focus. The subject’s expected starting point, where the camera will initially acquire AF, can be set anywhere in the frame.

Alternatively, Group mode can use sets of AF points positioned in a specific area of the frame to keep subjects moving towards and away from the camera in focus. This option is designed for when you wish to keep the subject in a specific area of the frame, to maintain a certain composition. When shooting in 3 fps CL mode it’s possible to select between 3×3, 5×3 and 5×5 focus point sets, and move them almost anywhere in the frame. In 8 fps CH mode the camera can only use phase detection for focusing, so you’re limited to 3×3 or 5×3 groupings in the centre of the frame. 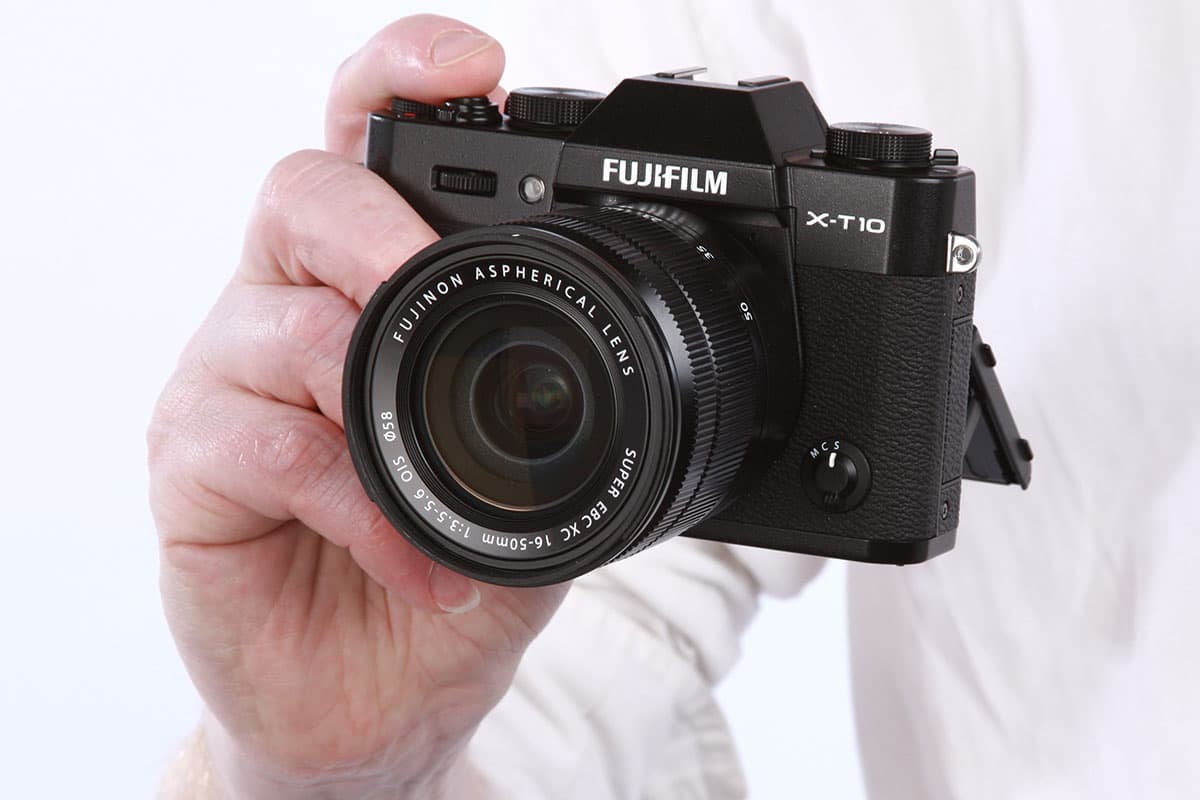 With its sculpted grip, the X-T10 feels secure in your hand

It’s fair to say that the Fujifilm X-T1 is one of the most widely-liked cameras in the AP office right now. The Fujifilm X-T10 promises to deliver a well-considered subset of its features, with the same dial-led handling, excellent image quality, and newly-developed autofocus system, wrapped up in an SLR-style body with an excellent electronic viewfinder. But what’s really impressive is that this all comes at a very competitive price; with an RRP of £499 body only, or £599 with the 16-50mm lens, it’s about the same as the recently-launched Canon EOS M3 and Samsung NX500, neither of which have built-in viewfinders.

With enthusiast photographers clearly placing a premium on being able to compose with the camera held up to their eye, rather than having to rely in a rear screen, the XT-10 therefore looks like it could be a seriously strong competitor at this price point. Indeed personally I’d be surprised if the camera doesn’t fly off dealers’ shelves just as fast as they can get it in stock. We’re certainly looking forward to getting a full-production sample and putting it through its paces as soon as we possibly can, so keep a look out for our full review.