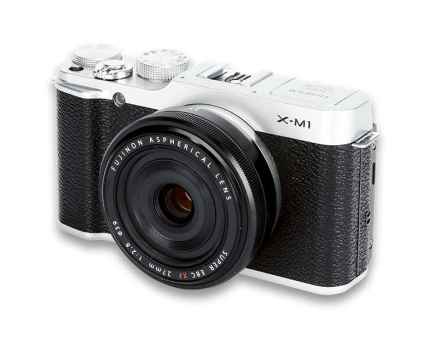 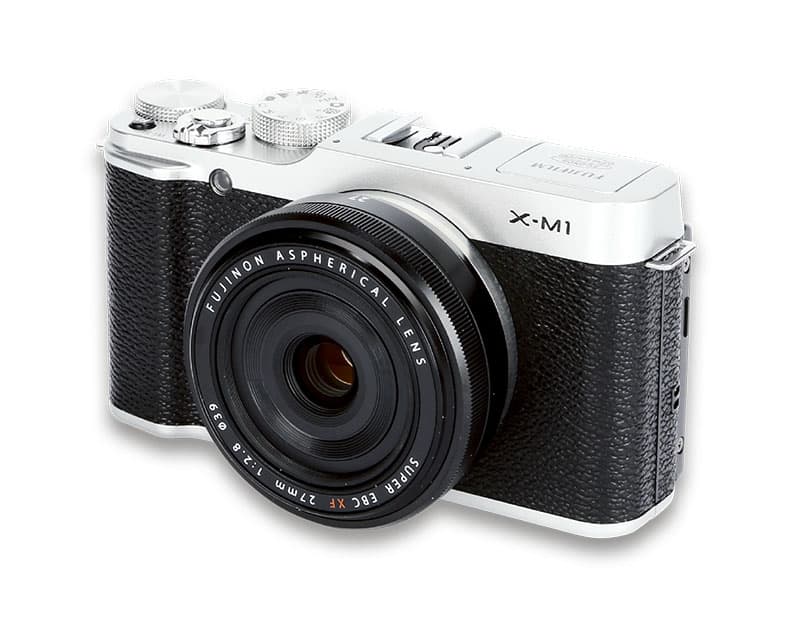 Fujifilm X-M1 at a glance:

What started with the Fujifilm X100 and a series of premium compact cameras has proved to be a big success for the company. From the initial success of the X100 compact came the X-Pro1, a compact system camera designed to look and handle like a vintage rangefinder camera. Both the look and handling of the X-Pro1 won it many fans, but it was the unique X-Trans sensor that convinced many to buy it. This sensor uses an unconventional colour filter array over the photodiodes that appears more random than the conventional Bayer pattern filter arrangement. This means there is less cause for an anti-aliasing filter, so Fuji has removed it from the sensor to give more detailed images than could previously be resolved using a 16.3-million-pixel camera.

Following on the X-Pro1’s heels came the X-E1, which uses the same sensor technology as its predecessor, but has an electronic viewfinder, rather than the hybrid optical/electronic unit found in the X-Pro1. Now, the firm has released the Fujifilm X-M1, which has no viewfinder at all.

The Fujifilm X-M1 is the smallest and most affordable X-system camera yet. It has all the retro style and charm of its two stablemates, and most importantly shares the same 16.3-million-pixel X-Trans CMOS sensor. Essentially, the X-M1 should produce the same quality of images as the other two X-series models, but without the use of a viewfinder and at a cheaper price.

As already stated, the Fujifilm X-M1 uses a 16.3-million-pixel, APS-C-sized X-Trans CMOS sensor. The unique X-Trans colour filter uses a 6×6 grid arrangement instead of the standard 2×2 grid used in a conventional Bayer-pattern sensor. The result is that the pattern of the filter array looks a lot more random than on a conventional sensor. This is designed to improve colour rendition, but it also has the advantage that the sensor does not require an optical low-pass (anti-aliasing) filter. The result is that images produced reveal much more detail than using conventional 16-million-pixel sensors.

The sensor and processing of the Fujifilm X-M1 allows for a sensitivity range of ISO 200-6400, which is expandable to ISO 100-25,600. The maximum resolution of images is 4896×3264 pixels, and images can be saved as raw or JPEG files, with the raw files saved in Fujifilm’s proprietary RAF format. Up to 30 JPEG images, or 10 raw images, can be shot in a burst, with a 5.6fps maximum continuous shooting speed.

Unlike the other cameras in Fujifilm’s X-series, the Fujifilm X-M1 has built-in Wi-Fi connectivity. This enables the camera to be connected to a smartphone or tablet via Fujifilm’s proprietary application. I found that the Wi-Fi connectivity works well, although it can take a little time to figure the correct sequence to connect the devices. Once connected, it is possible to browse or transfer images between the camera and a smart device, and it is even possible to use the GPS information from the smart device to geotag photos taken on the camera.