Pros: + Works with 35mm and 120 film up to 6x9
+ Simple, robust construction
+ Quick and easy to use
+ Optional holders for other kinds of film 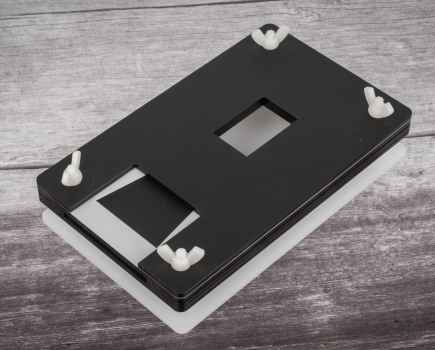 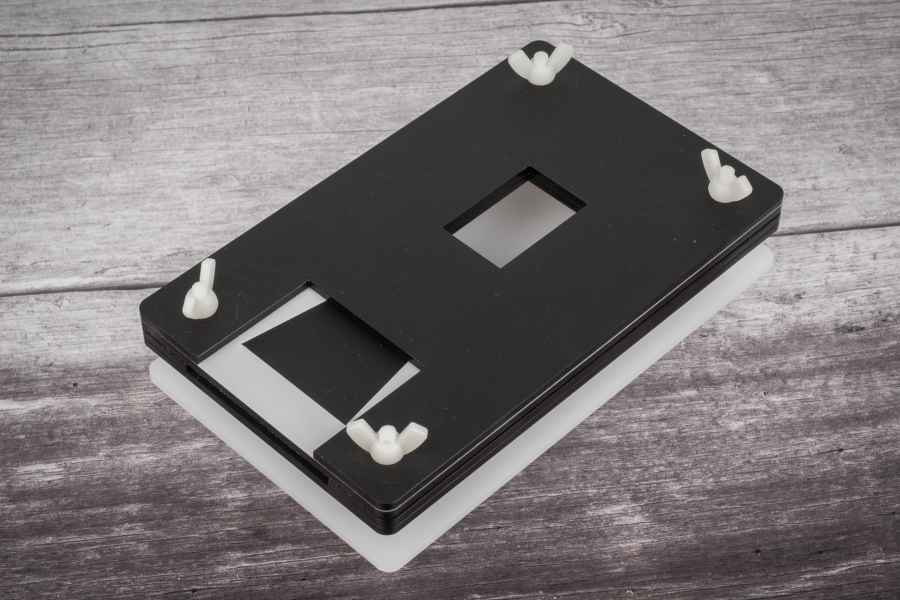 Pros: + Works with 35mm and 120 film up to 6x9
+ Simple, robust construction
+ Quick and easy to use
+ Optional holders for other kinds of film

Shooting film can be rewarding for any number of reasons. You might enjoy experimenting with unusual film stocks, playing with vintage cameras, or the discipline of working with a limited number of exposures and no instant feedback. But once you’ve developed your film, chances are you’ll still want do digitise it. Using a scanner looks like the obvious option, but often you can get better results by photographing the film using a DSLR or mirrorless camera. The main challenge is how to hold the film. 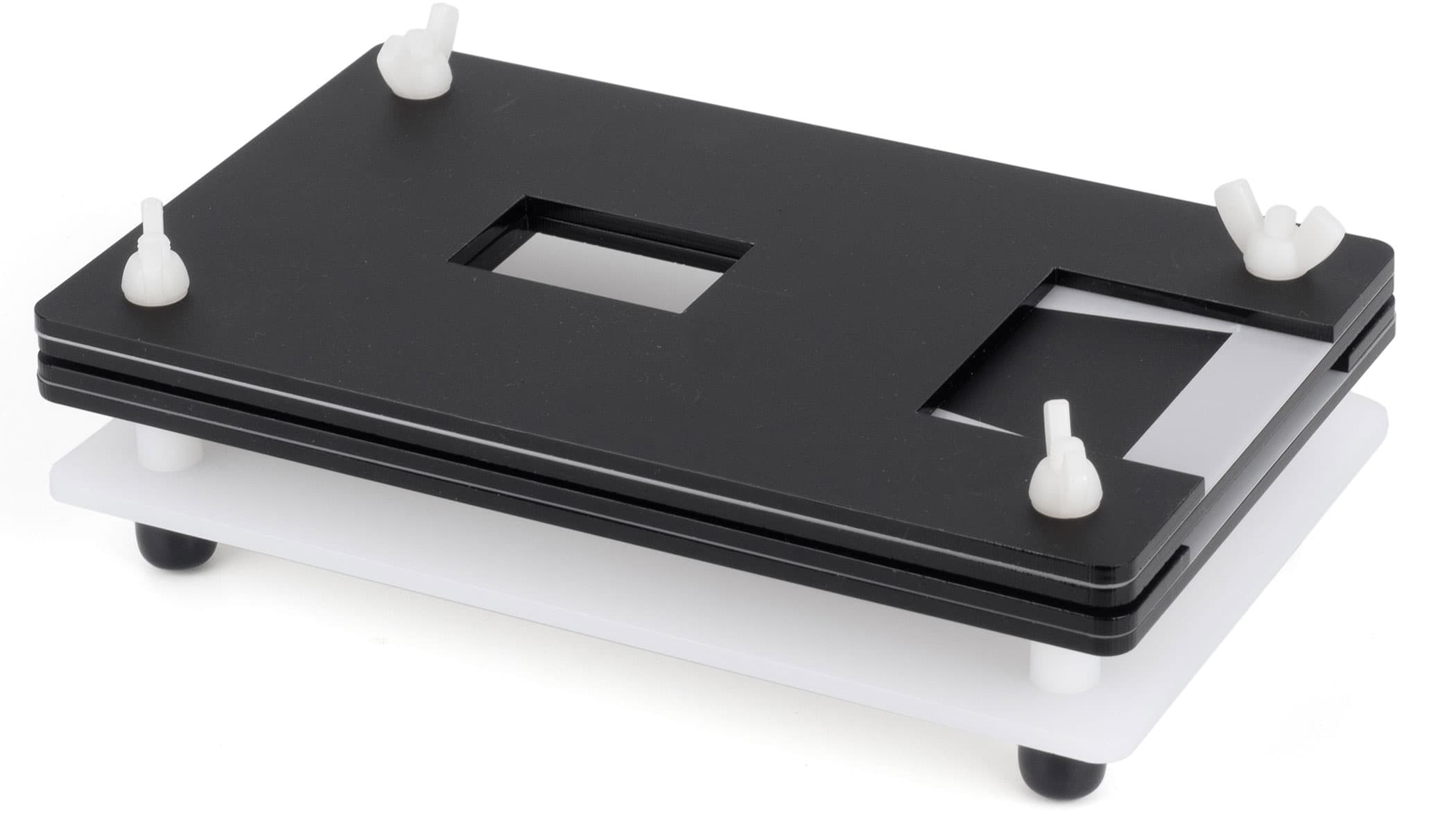 This is where the Essential Film Holder (EFH) comes in. It aims to provide a simple, affordable solution for holding film strips above a lightbox so they’re kept flat and perfectly aligned with the camera. The design is simple: four corner posts hold the components together, with a thick translucent diffuser at the base to ensure even illumination.

Above this are placed the film holders, each of which comprises two rigid black plastic masks sandwiching a 0.5mm film guide, with a cut-out at one end to aid in inserting film strips. Four wing nuts hold everything together. No metal is used, to minimise the risk of scratching your film. 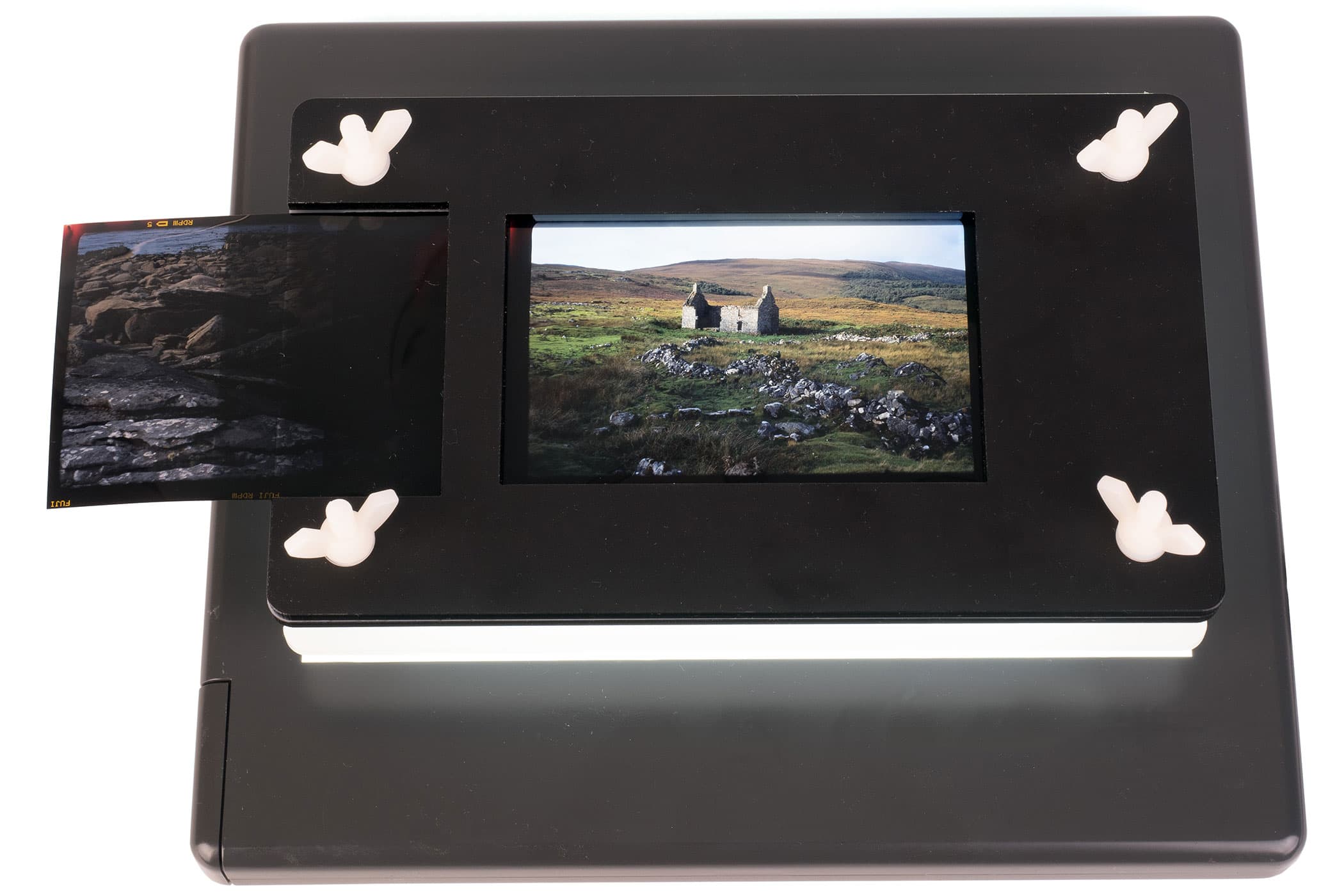 The holder on a lightbox, with a 6x9cm Velvia transparency

You can buy versions that take strips of 35mm or 120 film, with the latter capable of accommodating formats up to 6x9cm. The kit we’re looking at here includes holders for both film sizes, with the 35mm layer intended to sit above the 120 mask, separated by plastic washers.

To copy film, you first need to place the device on top of an even white light source, such as a 7in tablet or A6 lightbox (or larger). Then position your camera above it using a tripod or copy stand, with the lens pointing vertically down. A macro lens is ideal, but you could use extension tubes instead. Stop the lens down to f/5.6 or so to maximise sharpness, and shoot using a cable release or your camera’s self-timer. 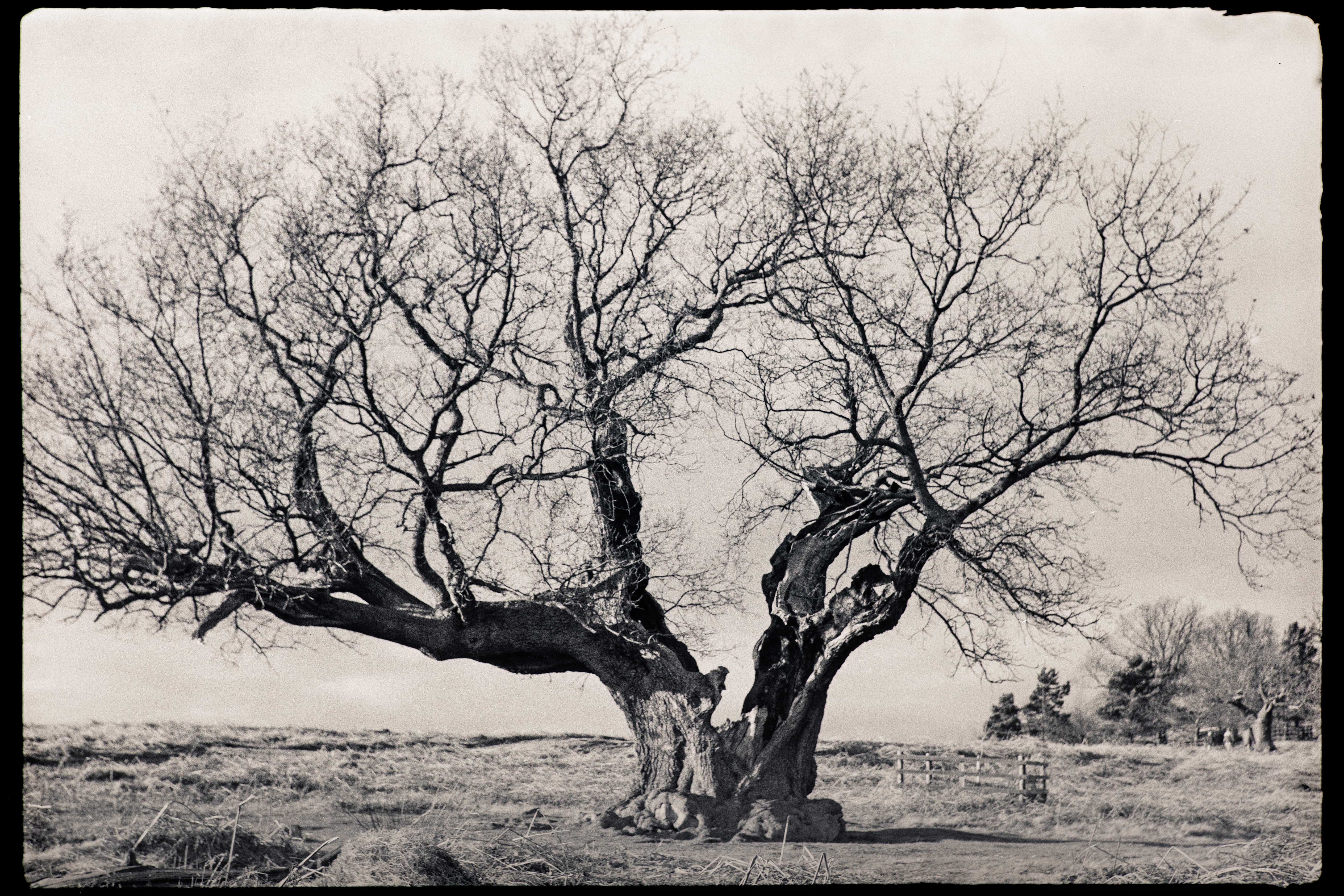 A 6x9cm black & white negative from a vintage folding camera, photographed using the EFH, and then inverted and toned in Photoshop

For best results, you’ll need to shoot in raw and develop your images using a neutral colour profile, to match the film as faithfully as possible. Colour slide copies shouldn’t need much processing at all, beyond brightness and tonality adjustments. Black & white negatives are almost as easy, if you just want to make a straight copy: simply invert the image and tweak the contrast. Getting good results from colour negatives is more complicated due to the coloured film base, but not too difficult if you have a good understanding of image-processing software such as Adobe Photoshop. 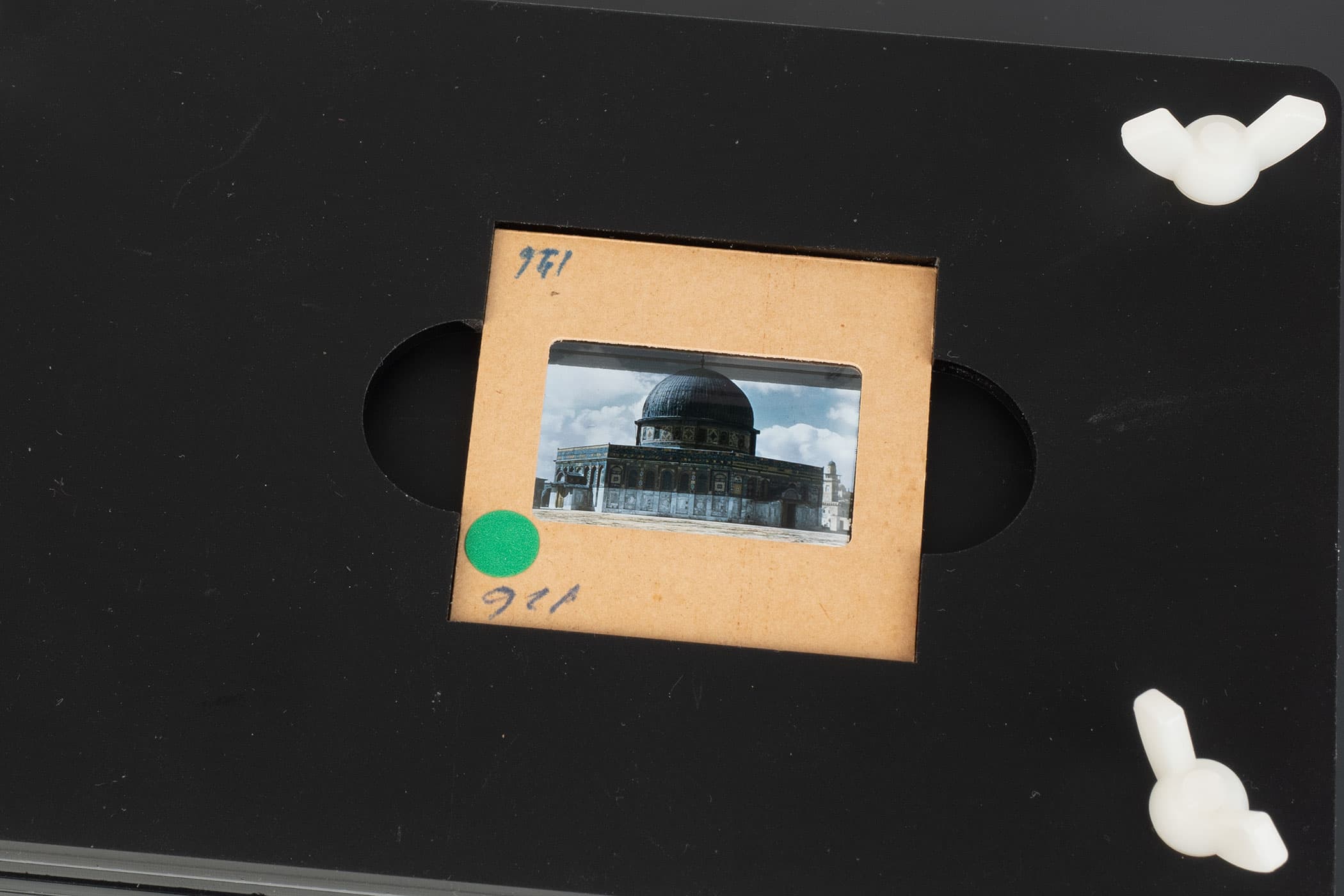 35mm slides can be accommodated using an optional holder

Inventor Andrew Clifforth is constantly improving the EFH and adding compatibility with different film formats. Optional masks for 35mm slides, 110, 620 and 127 film, or the 24x65mm panoramic format are available for £17 each. Postage is free if ordered at the same time as the holder.

In use the Essential Film Holder achieves its goal really well, at a fraction of the price of alternatives such as the Kaiser FilmCopy Vario. Its uncomplicated design makes it simple to use, which means you can rattle through copying a strip of negatives in double-quick time. Even allowing for processing your files, it’s much faster than using a scanner. 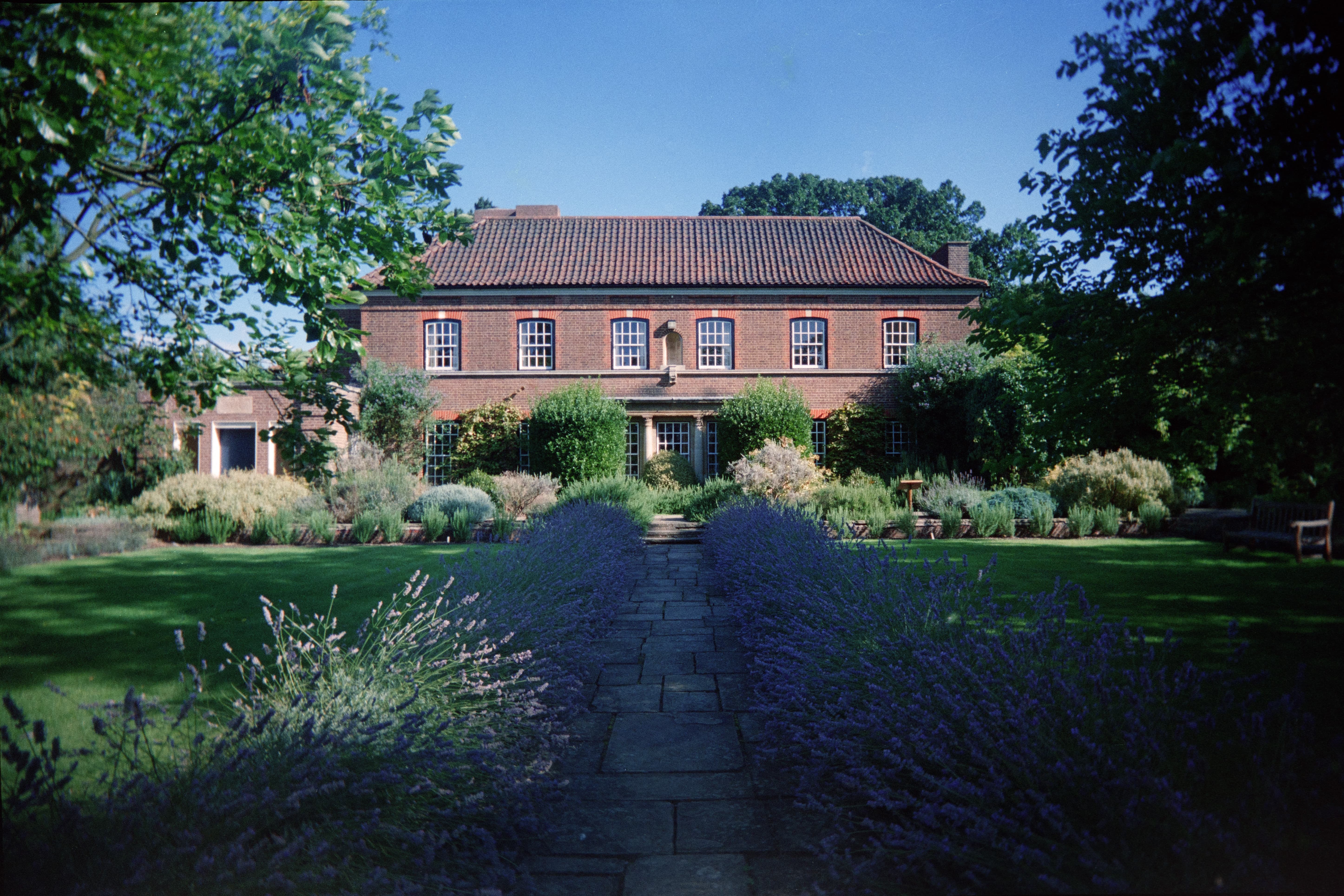 A 35mm colour negative copied using the EFH, inverted and colour-adjusted in Photoshop

I got really good results copying both 35mm and 120 film, with negatives and slides alike. If you shoot film regularly, but don’t want to spend a fortune on a holder to digitise it, this device might just live up to its name.