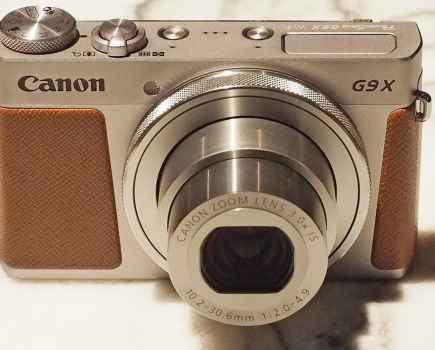 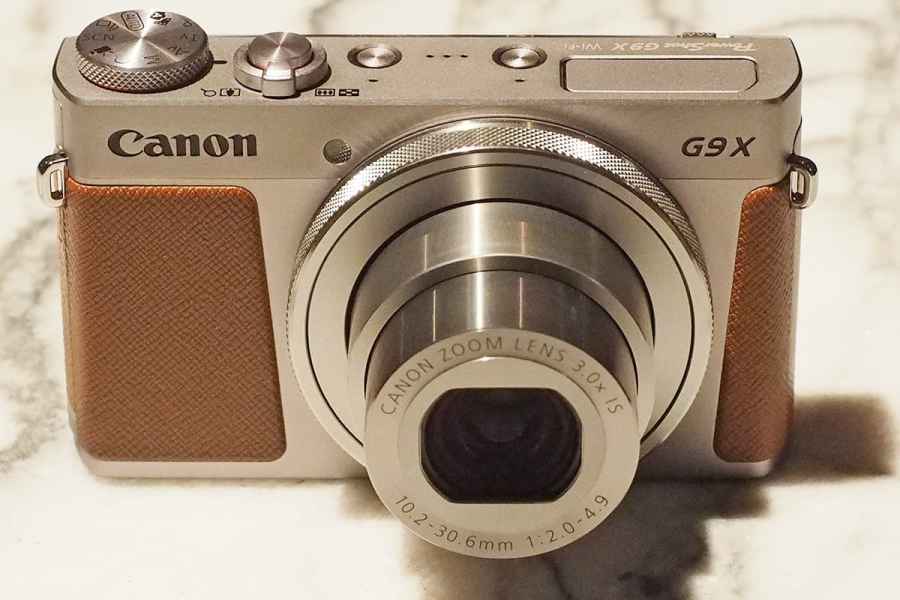 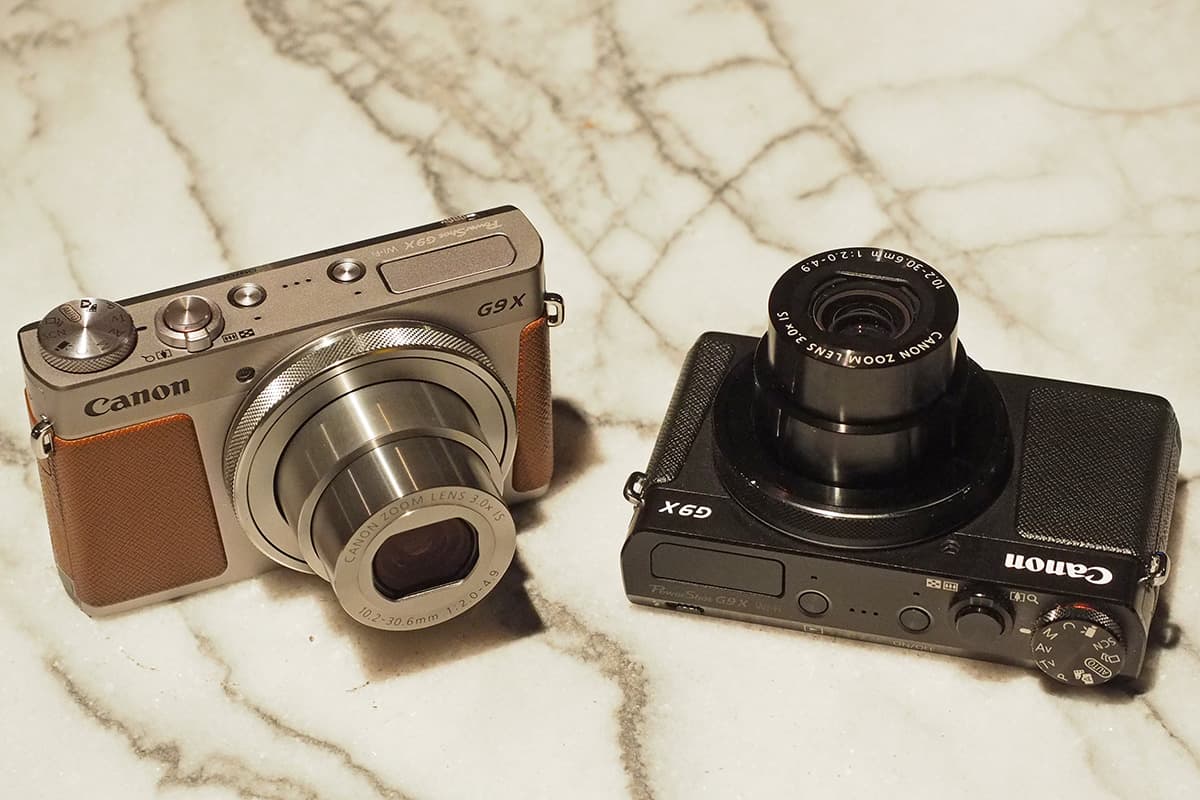 The G9 X will be available in a choice of brown and silver, or all black

The  Powershot G9 X is the second of two small compacts with 1-in sensors announced simultaneously by Canon. But where the G5 X is a beefed up variant of last year’s G7 X, the G9 X is a simplified camera that concentrates on being slimline and stylish. So where the G5 X is a serious compact for enthusiast photographers, the G9 X veers more towards being a high quality camera for social users which wouldn’t look out of place at a business meeting or in a posh restaurant. 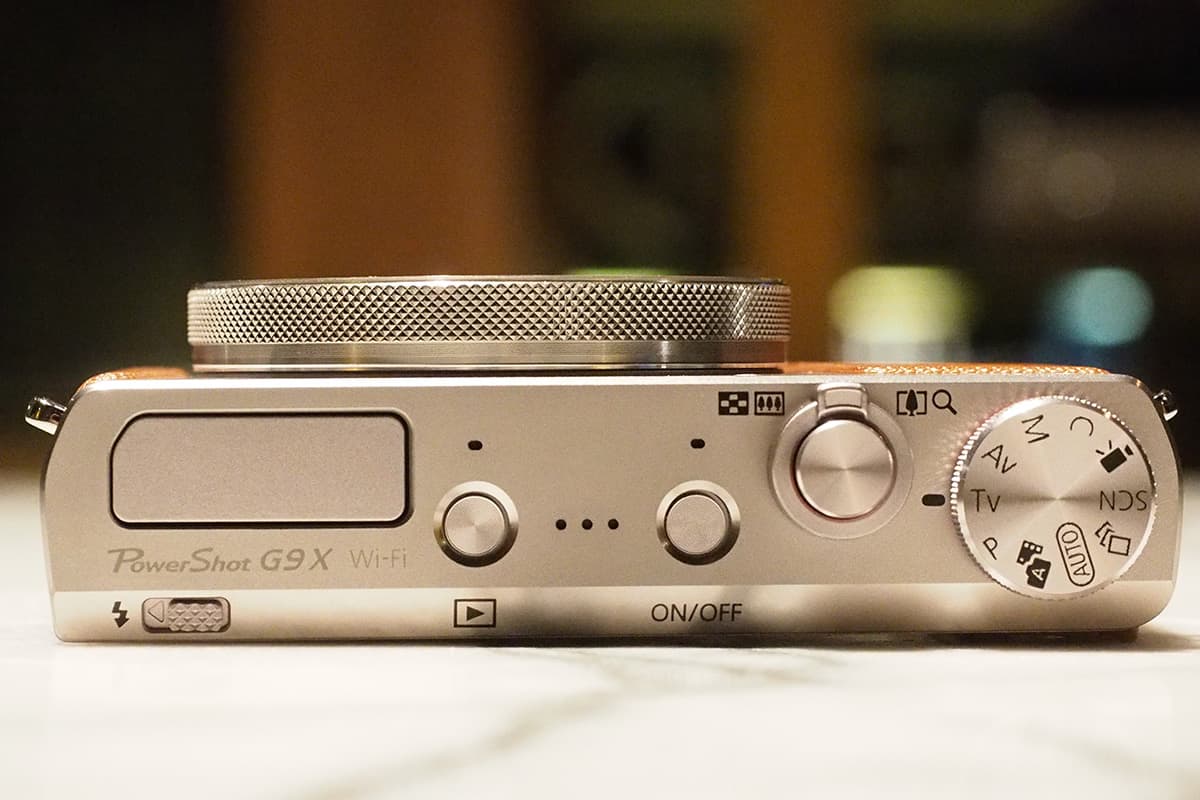 At less than 31mm thick, the G9 X will slip easily into a pocket

The most striking feature of the Canon PowerShot G9 X is just how slim it is: at just 98 x 57.9 x 30.8 mm and 209g it’s barely larger than the PowerShot S120 that it effectively replaces, and will slip neatly into a jacket pocket. It’s stylishly designed, too, and looks especially handsome in its two-tone brown and silver finish, although regulation all black will be available for more conservative tastes. 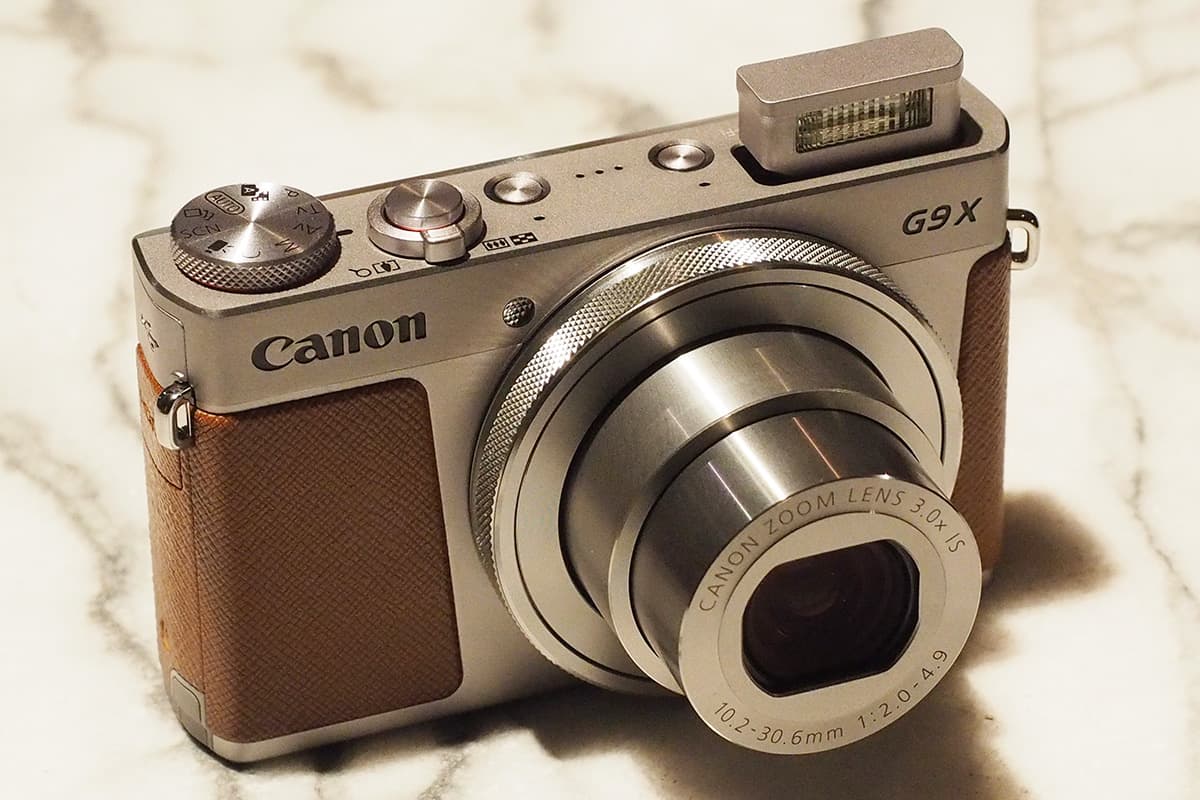 The built-in flash pops up from the top of the camera, released by a switch on the back

The G9 X retains plenty of manual control and a round-lens dial, but there’s no exposure compensation dial and the back of the camera is highly simplified. Most obviously there’s no d-pad, and changing settings mostly involves using the touchscreen to select a function then rotating the lens control dial to change it. It’s also possible to navigate and change settings in the menu or browse your images using the lens dial and the zoom lever, and while this can get very long-winded, it does mean that you’re not entirely reliant on the touchscreen. For most purposes, though, it’s quickest and easiest to control the G9 X by touch, smartphone style. This means it won’t necessarily be the best choice to use outdoors in winter. 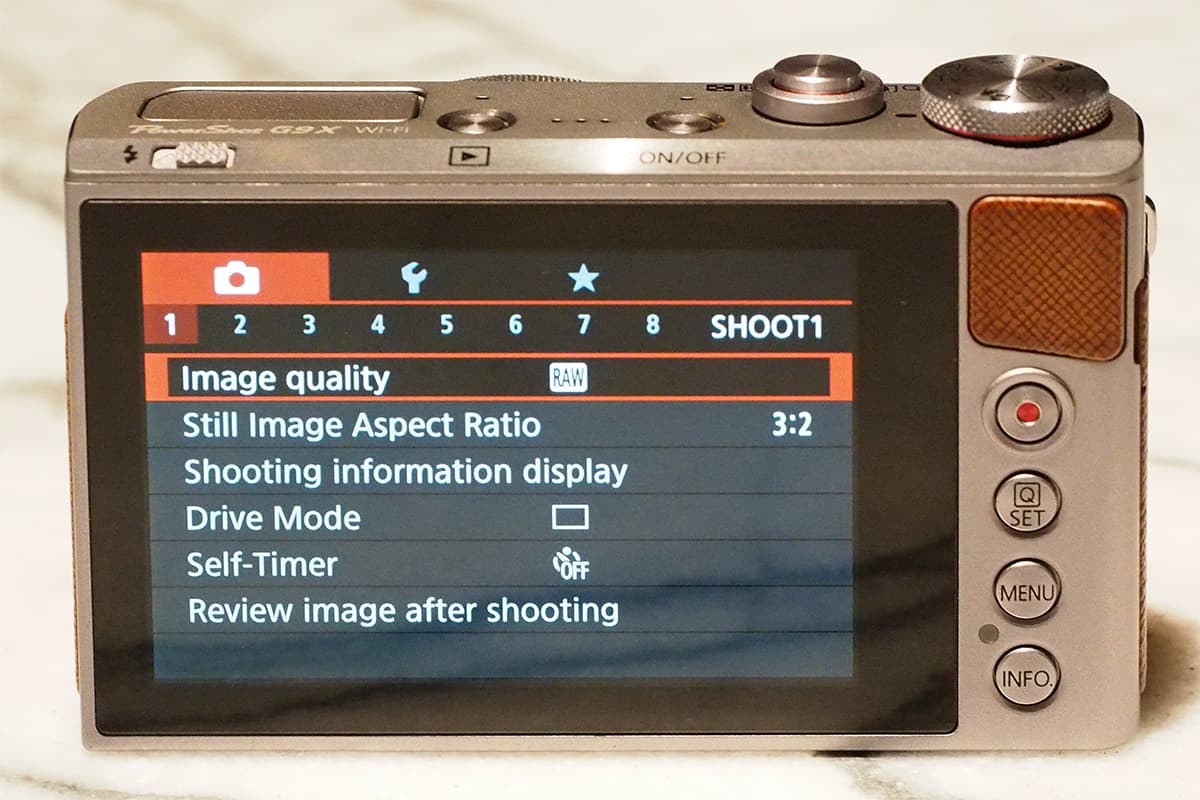 Canon’s entire interface can be controlled using the touchscreen

Another compromise made to keep the size down is that the G9 X has a less useful lens, with a narrower 28-84mm (equivalent) range and modest f/2 – 4.9 aperture, which will demand higher ISOs in low light, especially at telephoto. However this isn’t too dissimilar to the 28-100mm equivalent f/1.8-4.9 optic found on the original Sony RX100 and its Mark II successor, which didn’t stop them selling very well. The G9 X’s lens includes a 3-stop ND filter, which can be set to operate automatically when required, most obviously when shooting at large apertures in bright light. 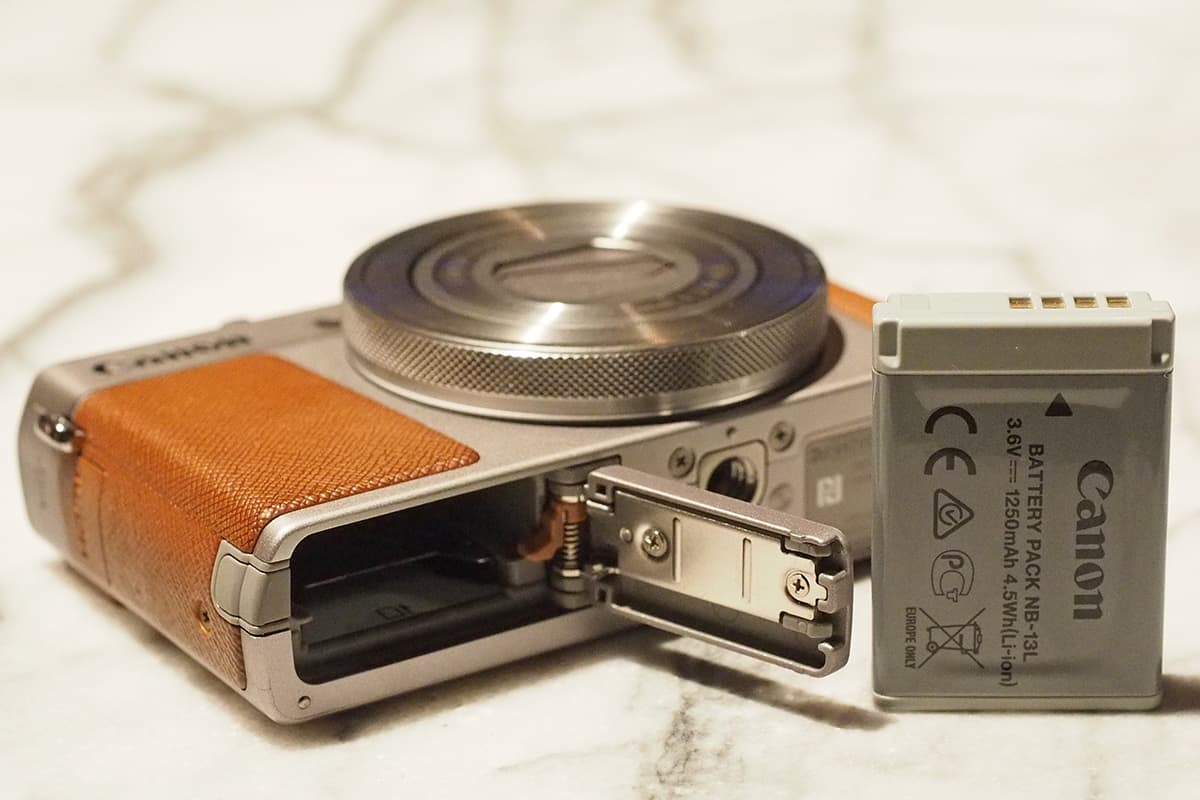 Aside from this, the G9 X has a solid, if not necessarily spectacular specification. Continuous shooting is available at up to 6 fps, or 4.3 fps with autofocus, and full HD movie recording is available at 60 fps. Smartphone connectivity is provided by built-in Wi-Fi with NFC. 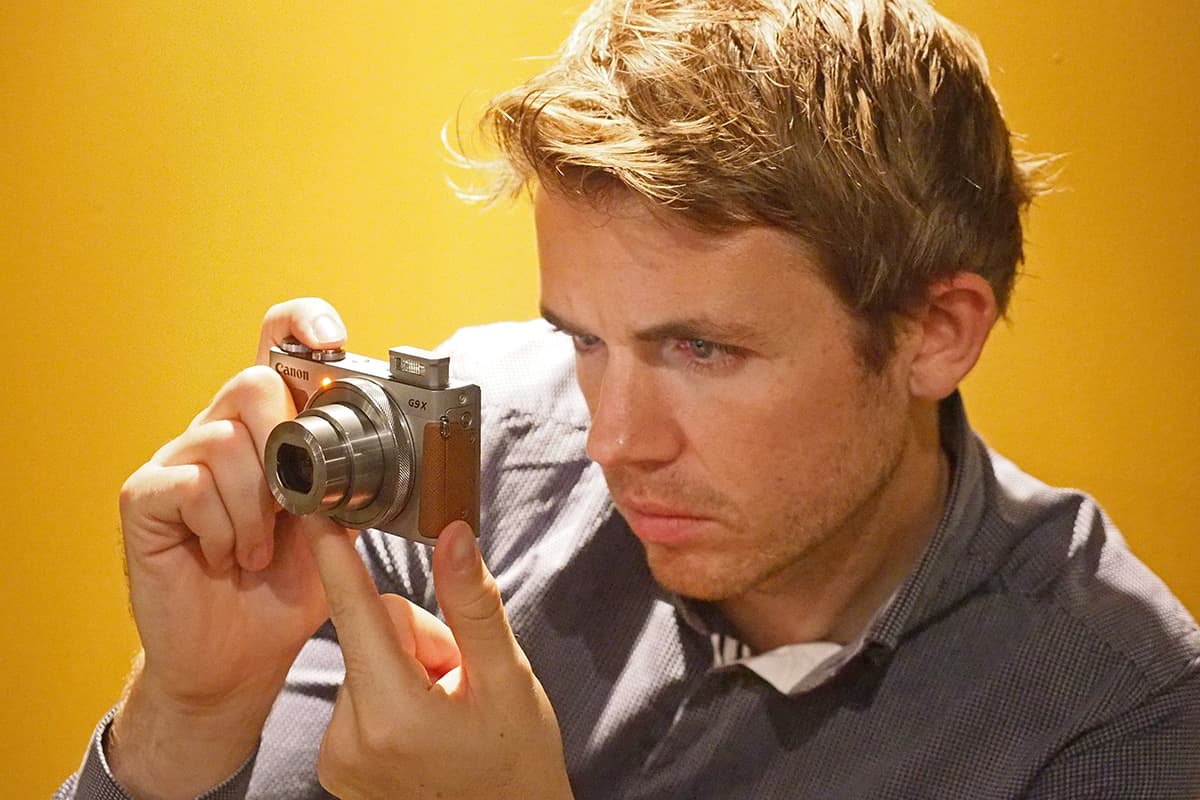 With the PowerShot G9 X, Canon is clearly targeting a slightly different segment of the market to those it’s catering for with the G7 X and G5 X. It looks like it could be a really nice pocket camera for casual photographers looking to step up from smartphones, or for DSLR and CSC users looking for a small pocket camera for social occasions. At its opening RRP of £399.99 the G9 X does look oddly-placed relative to the year-old G7 X, which currently sells for around £360, or against the £279 Sony Cyber-shot DSC-RX100.  I’d expect its price to adjust downwards to reflect the two camera’s relative positions in Canon’s range, although perhaps not before Christmas.