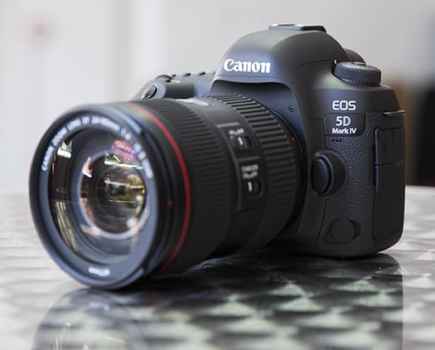 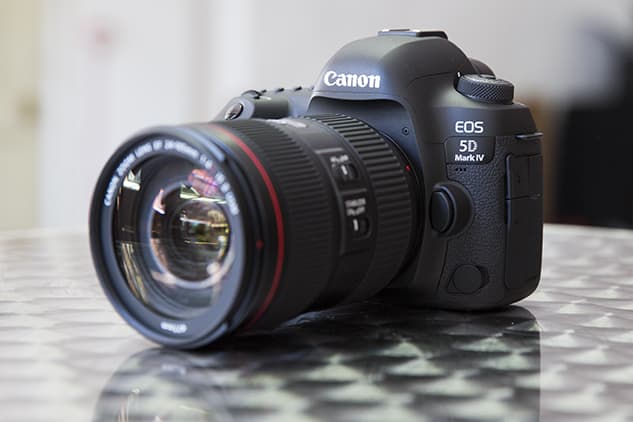 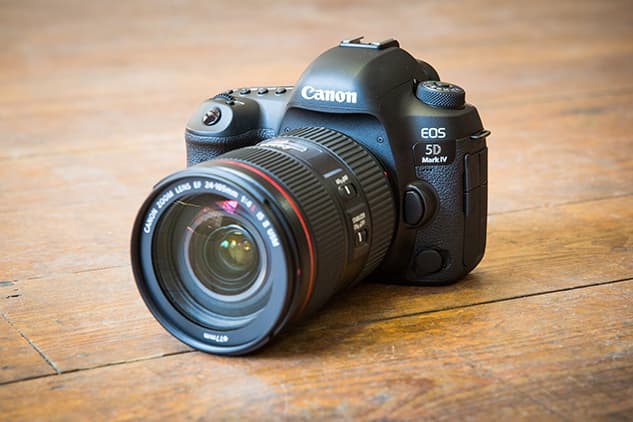 The Canon EOS 5D Mark IV was revealed to the photo press a couple of days before its official launch.

It’s been a long time coming, but Canon has finally taken the wraps off the EOS 5D Mark IV – the next model in the EOS 5D series and successor to the bestselling EOS 5D Mark III. Ever since rumours first started circulating that its arrival might be on the cards, we’ve been wondering about the specs the EOS 5D Mark IV might feature. Will it employ a new sensor? Could it have a tilt-screen? What design changes will be made? We’ve been patiently waiting to find out the answers to these questions and more. For a camera that’s been four years in the making and sets out to replace one of Canon’s most successful DSLRs, we’ve been expecting some major developments. Is it as good as we were hoping? Let’s take a closer look.

With regard to its imaging sensor it’s a case of ‘out with the old and in with the new’. An all-new full frame 30.4-million-pixel CMOS sensor replaces the 22.3-million-pixel CMOS sensor of old and provides a sensitivity range of ISO 100-32,000, expandable to ISO 50-102,400. The improved sensitivity range, combined with the developments that have been made to the noise processing algorithm to enhance its shooting performance in low-light, are a welcome improvement on the EOS 5D Mark III, which was capable of shooting between ISO 100-25,600 (extendable to ISO 102,400). 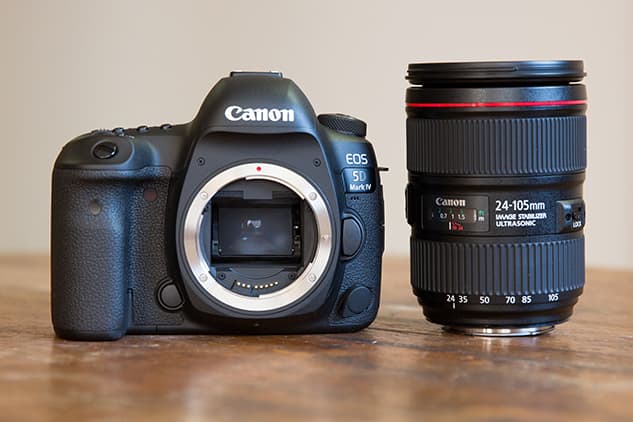 The EOS 5D Mark IV’s sensor adopts Dual Pixel CMOS AF, making it the second full-frame DSLR in Canon’s line-up to feature this technology. Each microlens covers two photodiodes that can be read independently, and by measuring the difference in light that reaches each of the two diodes, the EOS 5D Mark IV can perform on-sensor phase-detection focusing in live view and when shooting video. Canon has gone one step further with Dual Pixel AF this time by using it to develop a new innovation called Dual Pixel raw. The idea behind this technology is that it creates Dual Pixel raw files, which contain a pair of images shot from two very slightly different points of view. When these files are processed through Canon’s Digital Photo Professional (DPP) software, photographers are given the option to perform one of three types of unique image adjustments.

Image micro adjustment allows users to fine-tune the position of maximum sharpness – just imagine you’ve shot a shallow-depth-of-field portrait where the eyes aren’t quite as pin-sharp as you’d like them to be and then have the option to correct it during post processing. This is exactly what Dual Pixel raw has been designed to allow you to do. The other two adjustments you can make in DPP include bokeh shift, which allows out-of-focus highlights to be shifted horizontally so they coincide better with in-focus elements, and ghosting reduction, which can be used to reduce the appearance of artefacts like flare. At present, this method of fine-tuning and level of micro adjustment is entirely unique to the EOS 5D Mark IV and one we can’t wait to test in great detail when our review sample arrives, which we’ve been told should be in the next couple of weeks. 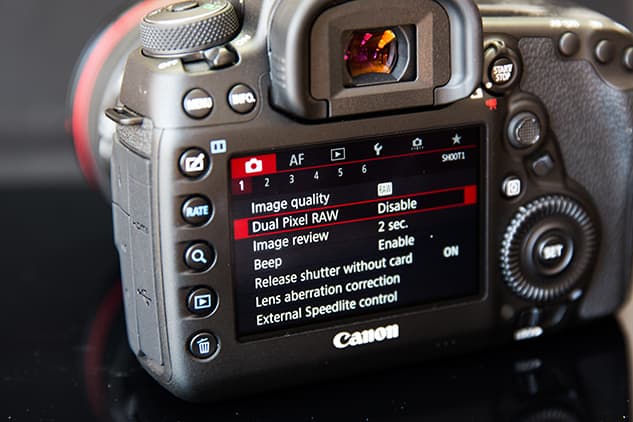 The new Dual Pixel raw function is found at the beginning of the EOS 5D Mark IV’s menu system.

For the first time on a EOS 5D-series model, the sensor teams up with not one, but two image processors. A DIGIC 6 processor is assigned to look after metering, while a DIGIC 6+ processor handles the camera’s high-speed image processing. Set to continuous shooting, the EOS 5D Mark IV shoots at up to 7fps, just 1fps faster than its predecessor, and captures up to 21 raw images or an unlimited number of JPEGs in a single burst. To put this in perspective, the EOS 5D Mark III managed 18 raw files before it hit its buffer – not quite the big improvement that many were hoping for.

Whilst sports and action photographers are most likely to take advantage of its improved burst and buffer depth, there’s also good news for those who are more concerned about discreetness than speed. There are two silent modes available (just like the EOS 5D Mark III), with ‘silent continuous’ mode allowing users to shoot at up to 3fps. Keeping on the topic of speed, the EOS 5D Mark IV can shoot continuously at up to 4.3fps in Live View with AF tracking. 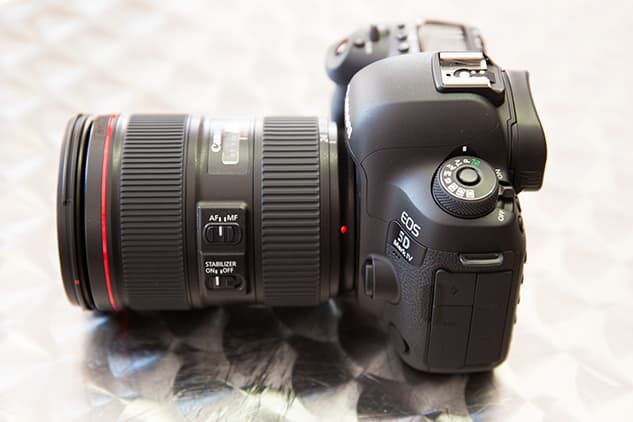 Also on board is an improved 61-point AF system with 41 cross-type points. This is a similar autofocus system to that found on Canon’s flagship DSLR – the EOS-1D X Mark II – and provides the ability to focus down to -3EV using the viewfinder, or -4EV in Live View mode. Users of teleconverters will appreciate that all 61 AF points on offer are f/8 compatible. There are also five dual cross-type points in the centre that are sensitive down to f/2.8 and as many as 21 cross-type points can be selected at f/8 for greater precision. The updated AF system joins forces with Canon’s tried-and-tested 150K RGB+IR metering sensor, which we’ve seen used before on the EOS 7D Mark II as well as the EOS 5DS and EOS 5DSR. To counteract the rapid on/off pulsing of certain artificial lights the camera also employs Canon’s Flicker Detection technology, claimed to be more effective with improved algorithms. 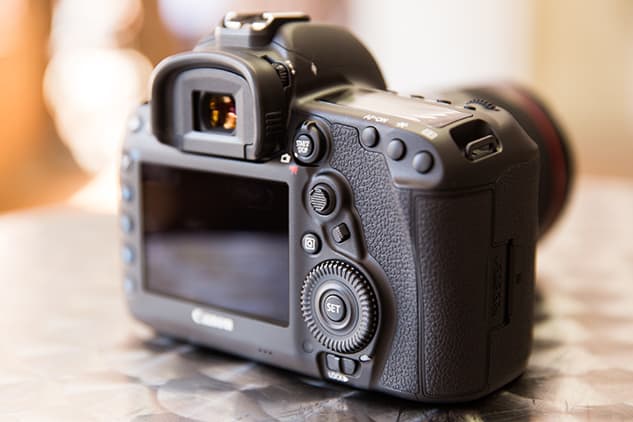 The Canon EOS 5D Mark II will be remembered as the camera that introduced Full HD video to the full-frame DSLR. Video has advanced hugely since 2008 and the EOS 5D Mark IV is the first camera in the EOS 5D-series to offer cinematic DCI 4K (4096×2160) at 30/25/24fps, with the option to extract 8.8-million-pixel JPEG images direct from movie footage. There’s Full HD available up to 60fps, together with the possibility to record at up to 120fps or 100fps at 720p. As already touched upon, the on-sensor phase-detection focusing that we’ve used on many Canon DSLRs before will benefit photographers and videographers who don’t want to tolerate a slow and clumsy autofocus performance when in live view mode. There are microphone and headphone inputs located at the side for videographers who wish to attach an external microphone and monitor sound levels as they’re recorded. 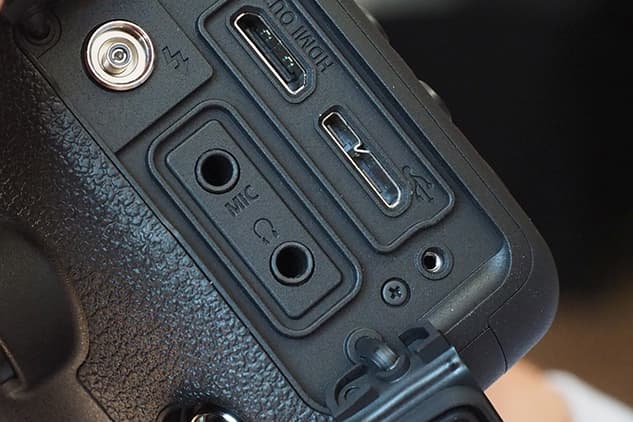 Note how the 3.5mm mic port is located directly above the headphone socket. There’s now a USB 3.0 port below the HDMI out input and the remote port has been relocated to the front of the body.

There are other additions too. After many years of waiting, built-in Wi-Fi finally makes it into the Canon EOS 5D Mark IV, and there’s built-in GPS for those who wish to geotag images with location data. For the first time on a Canon DSLR, there’s support for the International Press and Telecommunications Council’s system with a metadata function that enables users to assign additional details and information about an image to the EXIF data before it’s submitted. We are told it’s a feature that has been requested by Canon’s professional users who regularly submit images to galleries and picture desks, and who constantly ask for ways to speed up their workflow. 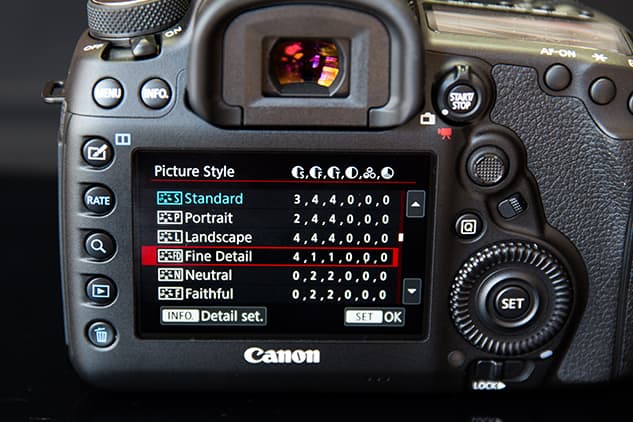 As we expected, Canon has added the Fine Detail Picture Style to the EOS 5D Mark IV’s menu.

Elsewhere, Canon has added its new fine-detail effect to the list of picture styles. Canon users wondering whether their existing batteries are compatible will be pleased to know that it still accepts the LP-E6N Li-ion battery, able to shoot approximately 900 shots from a single charge. The only objection from those looking at the Canon EOS 5D Mark IV as a potential upgrade is that it doesn’t accept the BG-11 battery grip. Instead it accepts a new BG-20 battery grip, which in standard fashion duplicates controls and dials, including the new push button located beside the AF multi-controller on the rear of the body.

We were told during our press briefing that the handgrip and thumb rest are both designed fractionally deeper. In truth, this alteration is barely noticeable and had I not known this prior to picking it up, I wouldn’t have noticed. The same can be said for the camera’s weight. It manages to shed 50g off the EOS 5D Mark III by introducing a new mirror box that we’re told is closer to the EOS 5DS and EOS 5DS R than the EOS 5D Mark III. This mirror box assembly uses less springs and more cams and gears, with a new cam being added to help eliminate mirror bounce. The 50g difference wasn’t obvious to me during a brief spell of shooting. 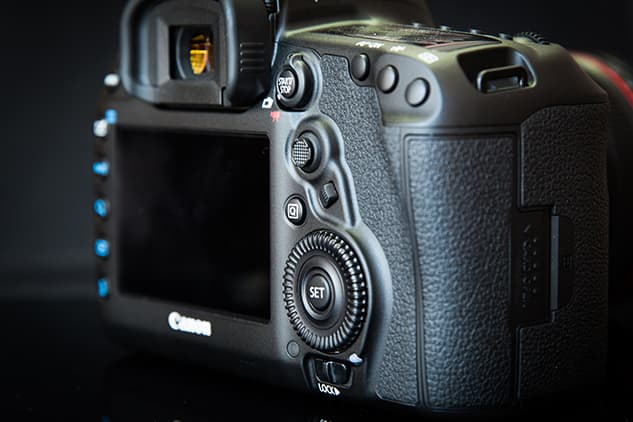 Those familiar with the EOS 5D Mark III, will notice the new push button at the rear of the Mark IV.

We half expected to see the Canon EOS 5D Mark IV inherit the thumb-operated sprung lever at the rear from the EOS 7D Mark II. Instead, there’s a new customisable push button offset from the quick-menu button, just below the AF toggle. This can be set up straight from the quick menu using the 3.2in, 1,620k-dot touchscreen and I found it an intuitive way to adjust ISO quickly in fast-paced shooting situations.

On the subject of the screen, Canon has taken the decision to keep the display fixed. Of course, introducing a tilt-screen could have had an impact on the layout of buttons to the left of the screen, which Canon decided against. The higher resolution screen is super-responsive to touch and makes navigation of the quick menu and main menu even easier. Other minor body changes see the remote port relocated to the front of the body whereas previously it was at the side, and the AF toggle is now the same design as that on the Canon 1DX Mark II.

The touchscreen provides precise control of key variables from the quick menu. It can also be used to navigate the main menu and swipe through images in playback mode.

As we’ve seen before on the Canon EOS 5D Mark III, the Canon EOS 5D Mark IV features dual card slots at the side, accepting Compact Flash and SD memory cards. Canon were keen to point out that the durability of the camera is even better than before, with improved weather seals added around the body. For existing Canon EOS 5D-series users, the camera will feel familiar in the hand and it can be picked up and used straight away – there’s very little that’s new about the body to learn. 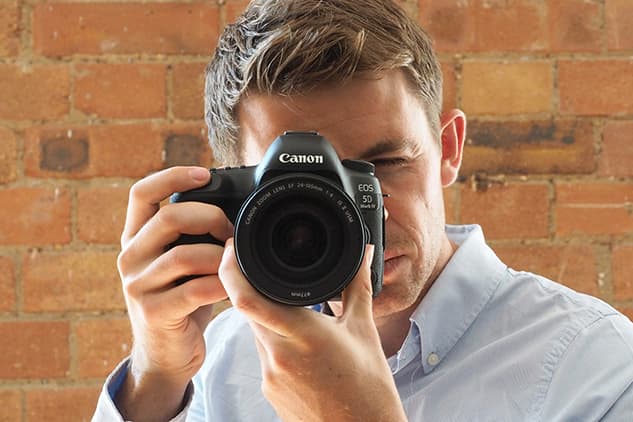 AP’s Michael Topham gets hands on with the EOS 5D Mark IV at the Canon UK press event in London.

At the press briefing for the Canon EOS 5D Mark IV, Canon gave us the chance to try out and use beta samples of the camera. We’ve since uploaded a selection of images taken with the camera to our Canon EOS 5D Mark IV sample image gallery. Please note all images have been resized to 90% or less of their original size – at the request of Canon. 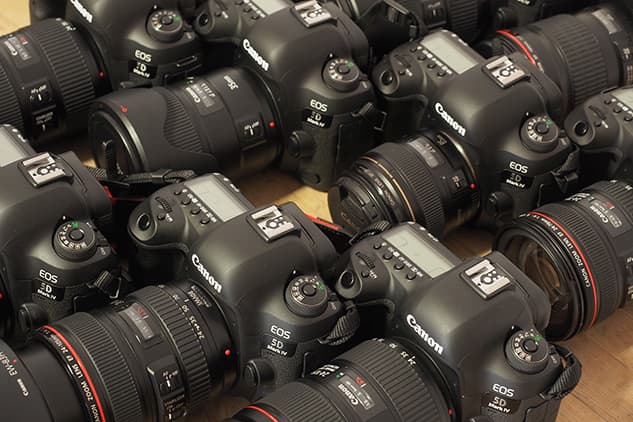 Canon had no shortage of EOS 5D Mark IV beta samples for members of the press to try out and use.