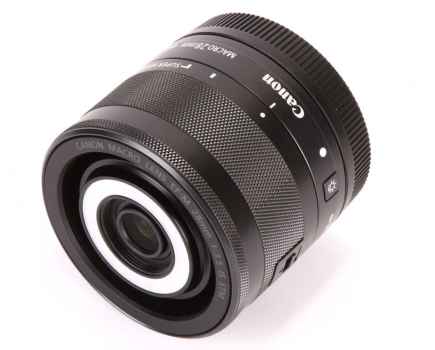 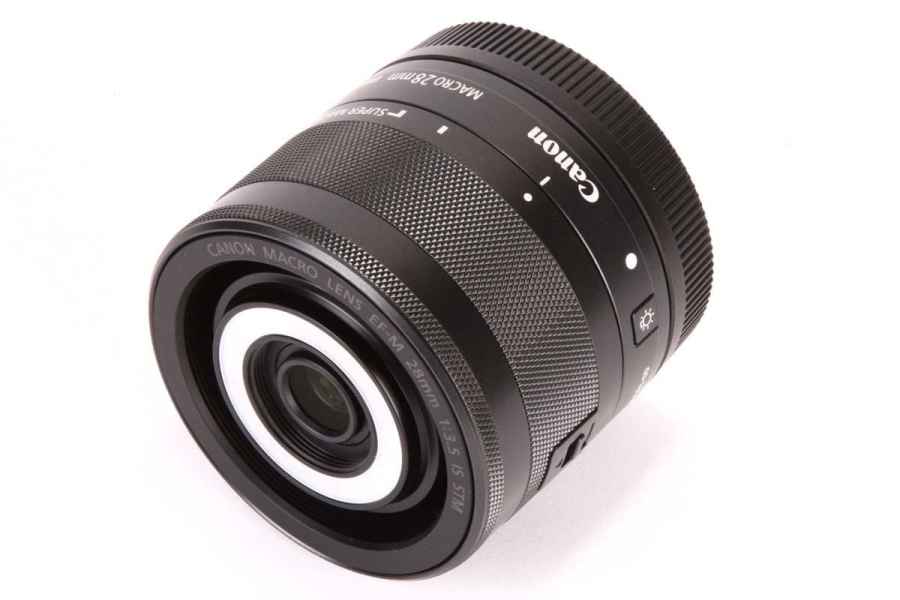 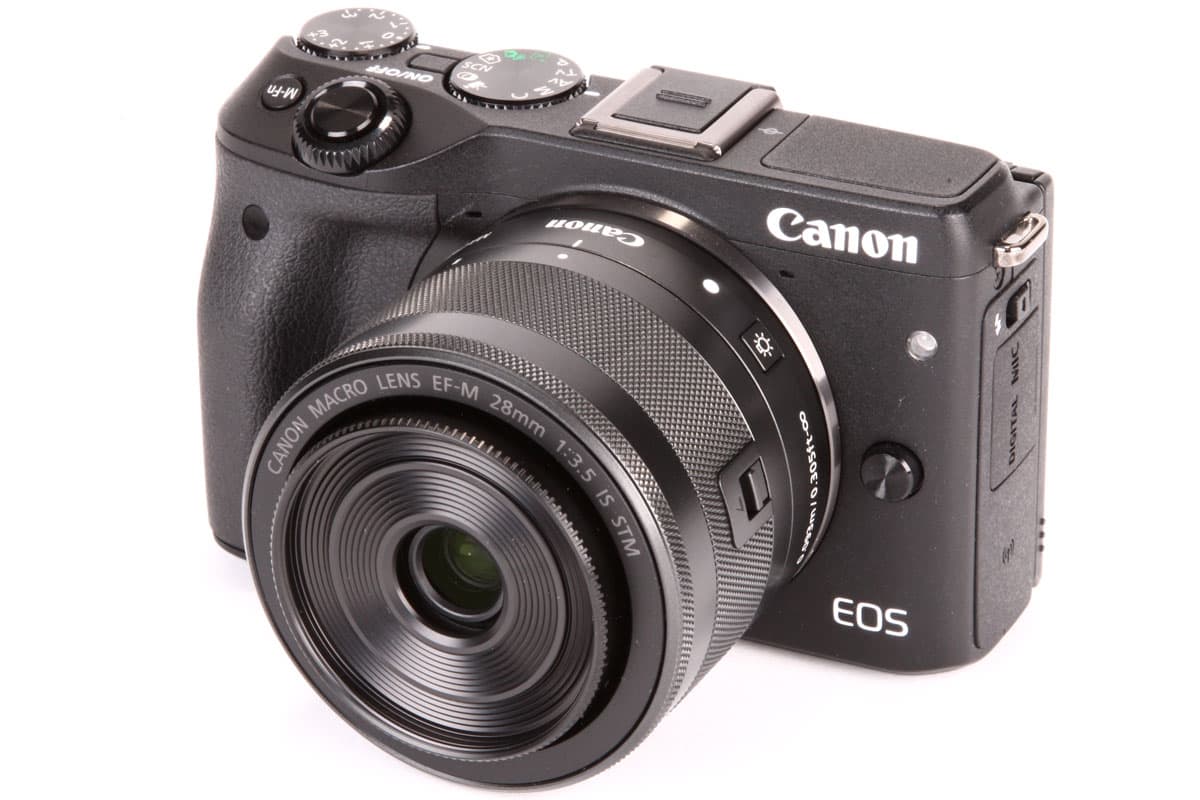 It’s not very often we see a lens that can genuinely lay claim to a single ‘world’s first’, let alone two, but the Canon EF-M 28mm f/3.5 Macro IS STM does precisely that. It’s a small lightweight optic for Canon’s mirrorless EOS M series compact system cameras, which can autofocus close enough to offer greater than life size 1.2x magnification. It also includes a built-in macro light to illuminate the subject at such close distances. To achieve this it uses a rather unconventional design: let’s take a more detailed look. 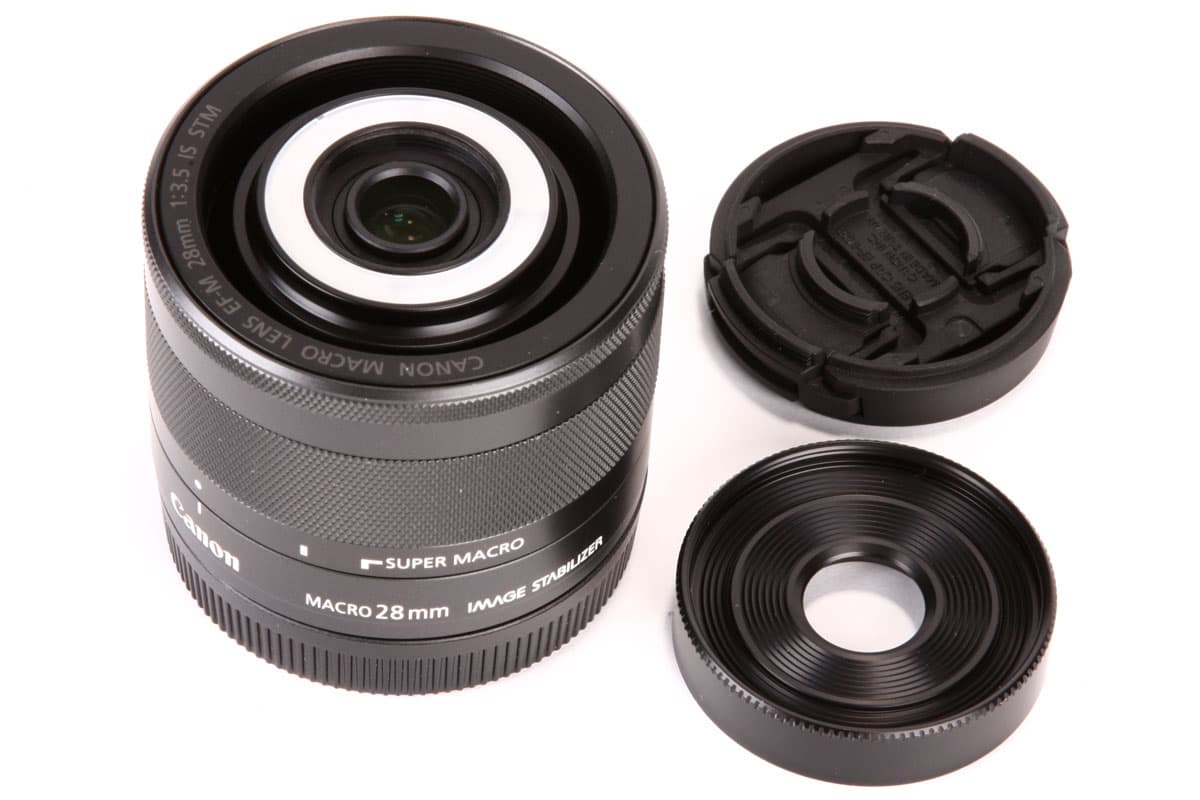 Key to the lens’s design are two unusual features. First, it takes the now-common concept of a collapsible lens barrel, and adds a twist. In addition to the usual retracted position for transport and extended position for normal shooting, there’s a further ‘Super Macro’ position. This moves the front of the lens a little bit further forward, allowing extreme close-up shooting with up to 1.2x magnification. In the standard position, the lens allows a more conventional 1.0x magnification.

At this point, you should be wondering what those numbers mean in practice. Quite simply, in normal mode the lens can fill the frame with a subject measuring approximately 22mm x 15mm; in super-macro this drops to 19mm x 13mm. At this point, you’re focusing on a subject just 13mm in front of the lens. 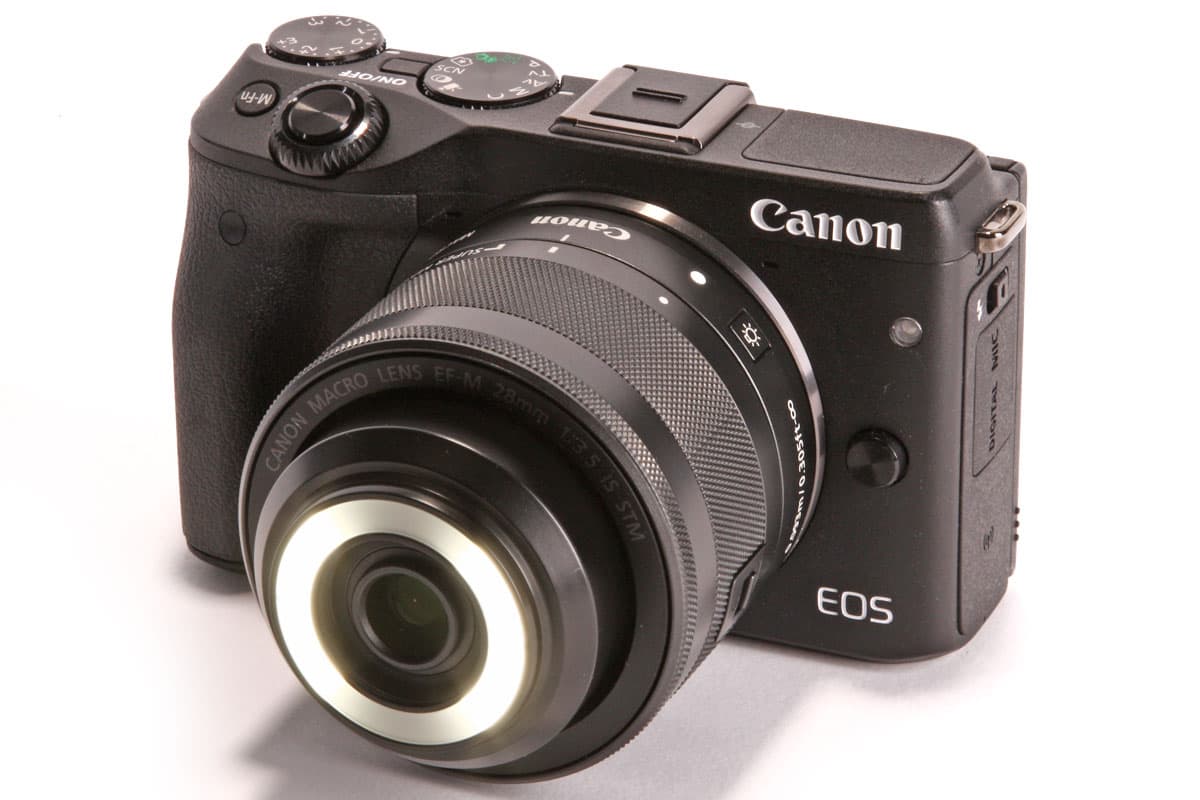 The two-segment macro light can be seen turned on here. You can turn on both lights or either side individually, each with two power settings.

Lighting subjects this close to the camera is often problematic, as the lens itself will cast shadows on your subject. Canon has addressed this in two ways. Firstly, the end of the barrel is tapered, so should cast less of a shadow. Secondly, there’s a built-in a two-segment light that you can turn on to help light your subject. Pressing a button on the side of the barrel turns on the light, and pressing it again reduces the brightness. When the light is off, pressing and holding the button changes its mode: you can now use either the left or right side light, at either full or half power. (What you don’t seem to be able to do, sadly, is have one light turned on full and the other on half.)

If you want to use filters on the lens, you’ll have to screw on the ES-22 hood. This is included in the box, and adds a 43mm diameter filter thread. Meanwhile the EF-M28 front cap is cleverly designed to clip onto the lens regardless of whether or not the hood is in place. 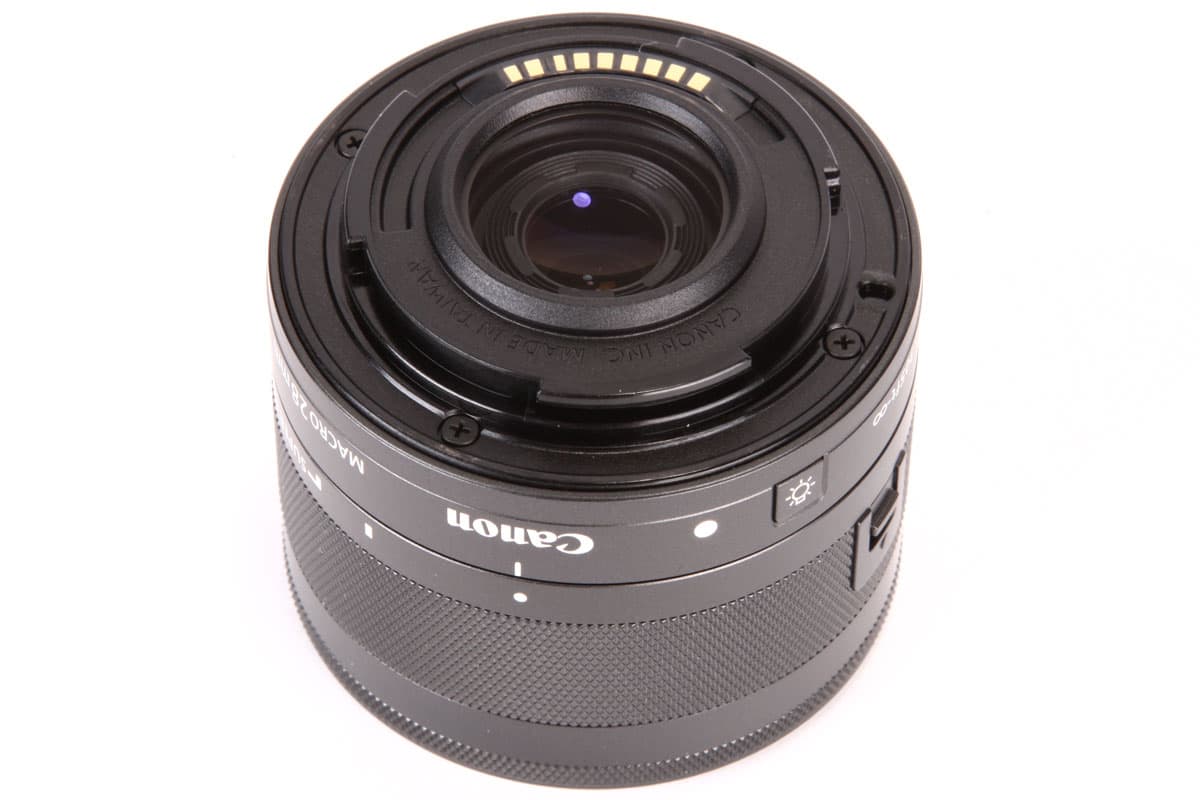 Aside from this, the lens uses a stepper motor for fast, silent autofocus and includes optical image stabilisation to combat blur due to camera movement. This is Canon’s ‘Hybrid’ or 4-axis version which compensates both for angular movements, and up/down and left/right movements of the lens relative to the subject; the latter contributes additional blur during close-up shooting. Canon claims it will give up to 3.5 stops compensation, in other words you should be able to use shutter speeds around 10x slower than would be possible without IS.

When used on an EOS M series camera with an APS-C sensor, the 28mm focal length gives an angle of view equivalent to around 45mm in full frame terms. This is an ideal ‘normal’ focal length, and offers a very natural perspective to images. The lens is pretty compact and lightweight (just 130g), so easy to carry around with you all day. 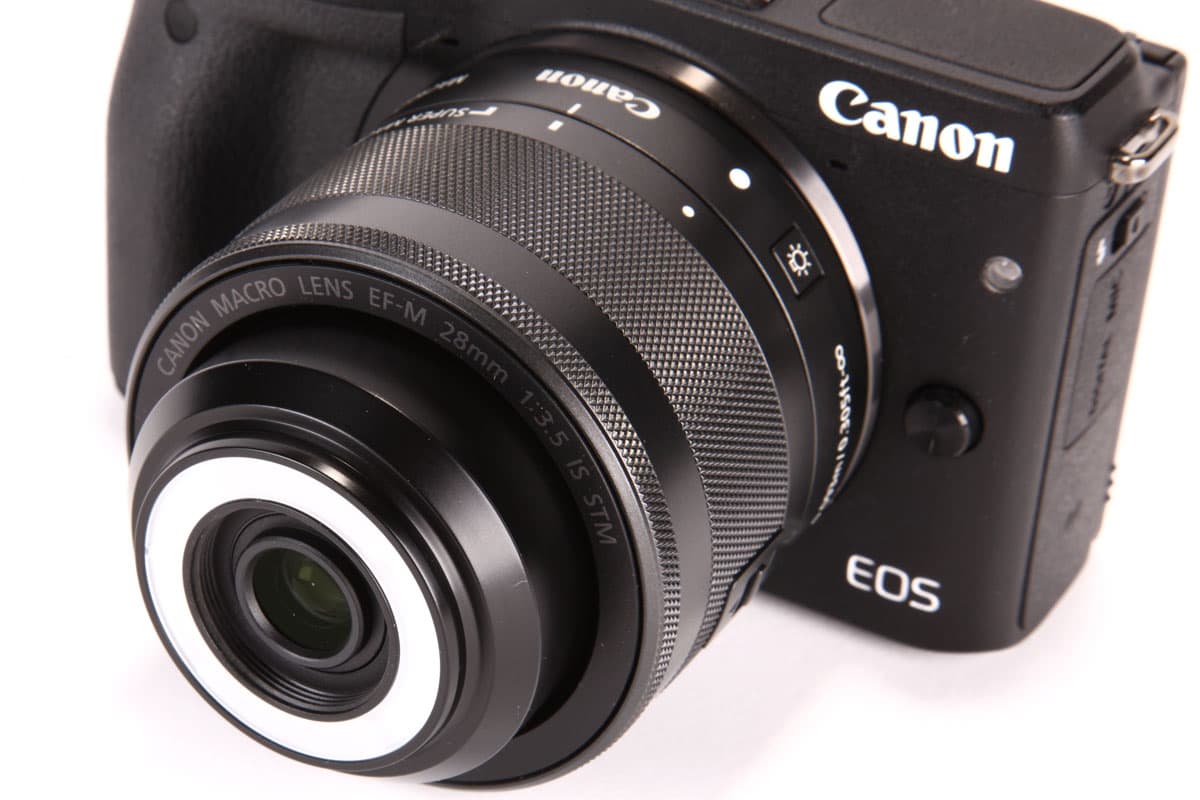 With its built-in macro light, the Canon EF-M 28mm f/3.5 Macro IS STM is a unique design

There’s no doubting that the Canon EF-M 28mm f/3.5 Macro IS STM is a clever and innovative design. It’s not the first macro lens ever to include built-in lights – for example the Yasuhara Nanoha x5 for Micro Four Thirds has three LEDs arranged around the front of the barrel – and it’s not the first consumer lens to manage better than the usual 1.0x magnification. But it is the first mainstream, relatively inexpensive autofocus optic to do either, let alone both.

I have my reservations, though. Personally I wouldn’t choose 28mm for a macro lens; longer focal lengths usually give more interesting images for close-ups, with less-cluttered backgrounds. The modest f/3.5 maximum aperture also means that the lens offers relatively little advantage over the standard EF-M 18-55mm f/3.5-5.6 IS STM kit zoom for low light shooting; for this the EF-M 22mm f/2 is still a better choice. To be honest I think a more conventional 60mm f/2.8 macro would have been a better addition to Canon’s still very sparse EF-M lens system.

On its own merit, though, the EF-M 28mm f/3.5 Macro IS STM adds an interesting and welcome new option for EOS M users who want to explore close-up photography.