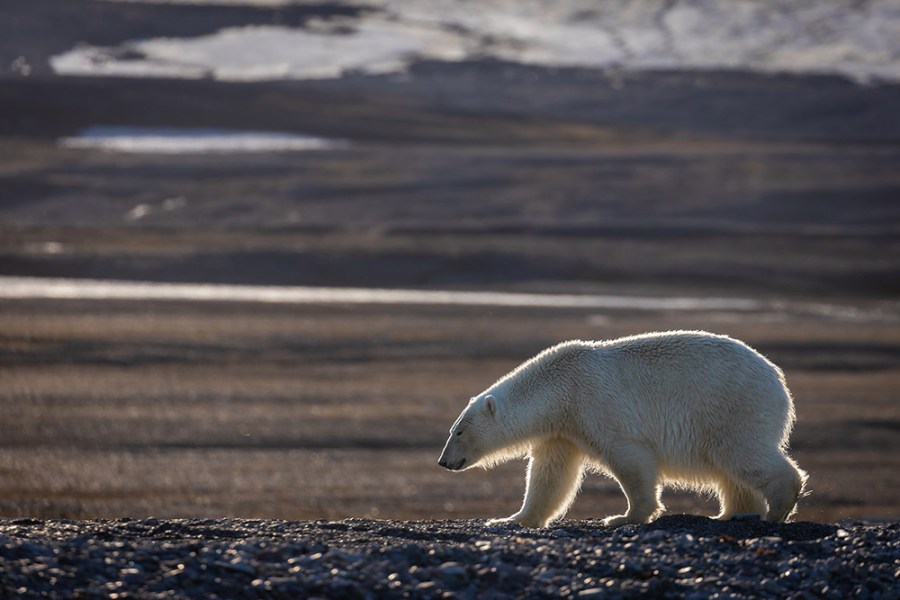 Here are the top ten images uploaded to Photocrowd from APOY 2022 Round Eight, Wildlife, with comments by the AP team and our guest judge

Without a doubt, wildlife is one of the most popular and most tricky to judge categories in APOY every year. The sheer breadth of subject matter, style and skill on the part of the photographers entering makes it a wonderfully difficult genre to whittle down. The important thing is for the judges to be able to give equal time and attention both to the more physically impressive, majestic animals and the less ‘obvious’, more everyday or subtle creatures.

The grandeur of a tiger photographed on safari can sometimes overwhelm a simple brown rabbit, and it’s our job to ensure one doesn’t drown out the other. Attention also needs to be paid to how creatively something has been photographed. Does a straight animal ‘portrait’ say everything you want to say about the subject, or could it be treated more creatively, or shot in different light? Many of our entries passed the creativity test with flying colours, and the sheer range of entries is well reflected in our top ten. 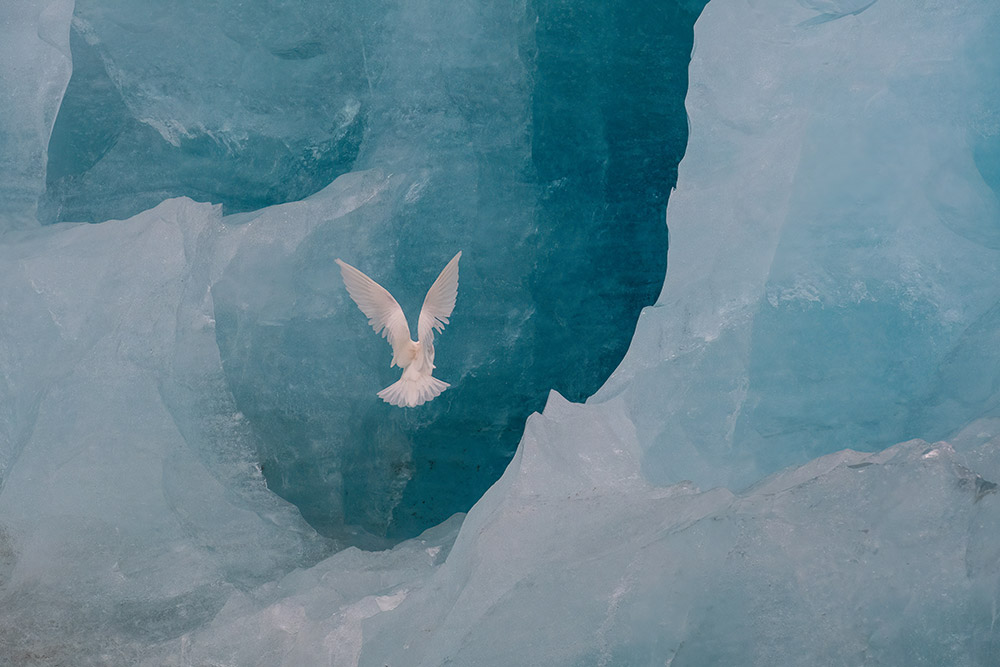 Gill has captured a magical and breathtaking moment, which somehow manages to make an ivory gull appear more like an angel in flight. It is a long way from being a ‘classic’ wildlife photograph – which is why it instantly stood out to the judges. Her timing is superb. Not only did she release the shutter at the moment when the gull’s wings were fully outstretched, but she also framed it against the darker blue of the Svalbard ice, making it stand out beautifully. Gill has combined artistry with a sense of context and environment, and as a result has created an image that is both original and memorable. Very well done. 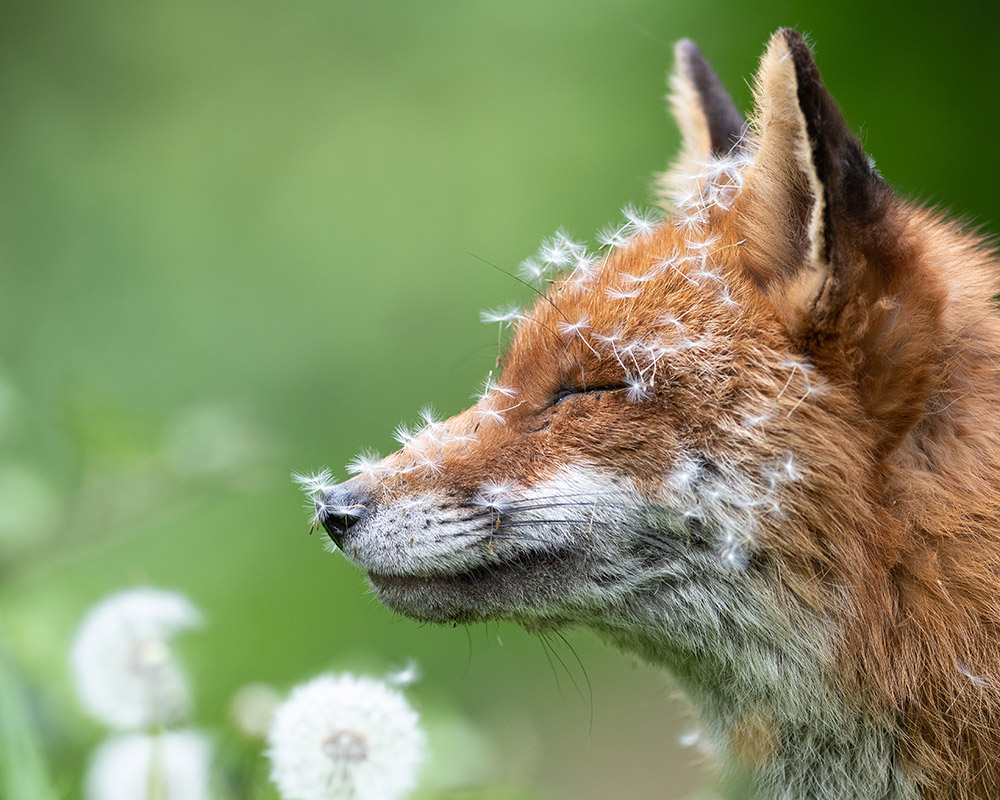 Here we have another original treatment of a well-photographed subject, which is what made this image stand out among the many (also excellent) images of foxes we saw in this category. What Lewis has achieved demonstrates the importance of spending time with a subject and becoming aware of its patterns of behaviour. Having studied the family of foxes, he knew this vixen would often take a nap among the dandelions in the afternoon, so he made sure he was ready for the shot. To capture the fox in such a perfect profile shows great skill, and her closed eyes tell a story of the dandelion seed heads potentially irritating her. An excellent choice of aperture shows the viewer more dandelions, but blurs them so they
are not a distraction. A charming and unusual portrayal of this popular and widespread mammal. 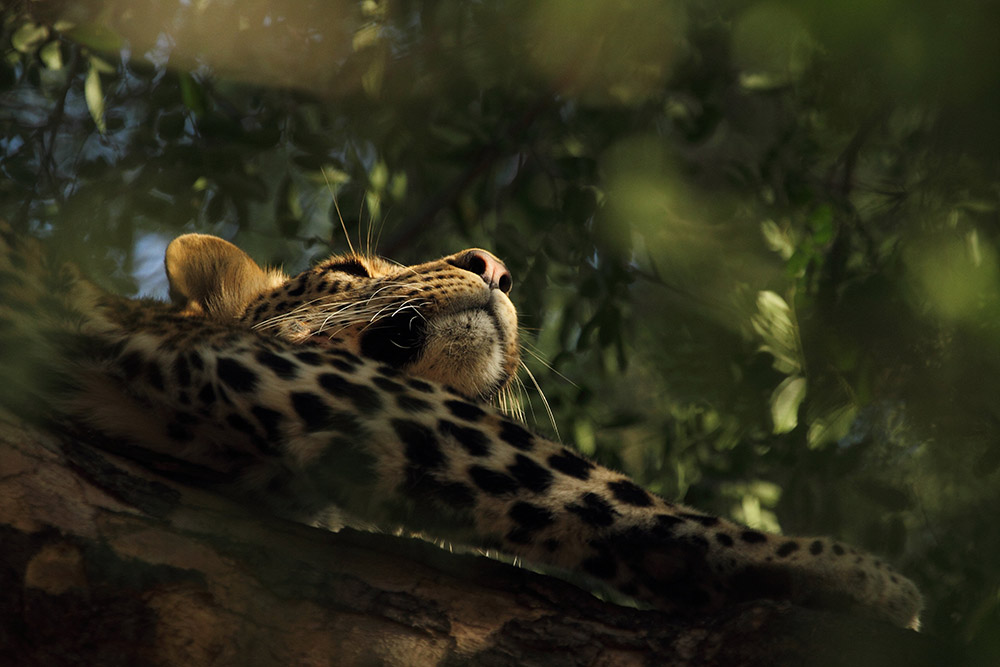 Tracey has chosen an intriguing angle for her shot of a leopard resting in a tree, and it wouldn’t have been anywhere near as successful without the lovely soft light breaking through the leaves. She has focused on just the right spot, ensuring the cat’s whiskers are pin sharp, while everything else falls away into a pleasing blur. She’s also taken care with the composition, placing its head on the thirds and ensuring the whole leg is included in the frame. 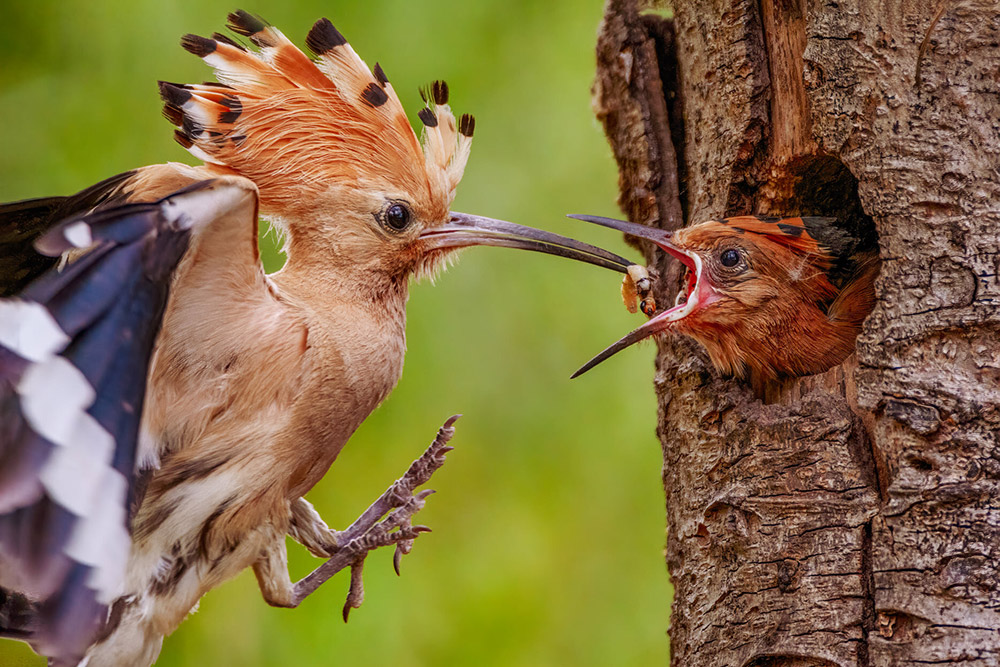 An outstanding action shot from Sara, capturing a hoopoe at the moment it arrives to feed its young. Her timing is immaculate, and the desperation of the chick almost jumps out of the frame. 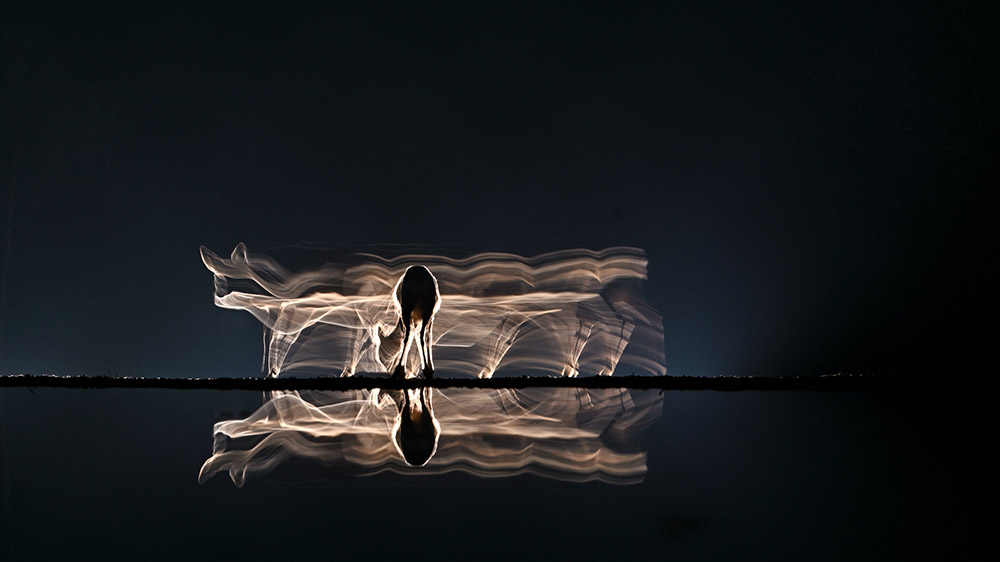 A highly unusual treatment, showing roe deer at a water station in a forest in Hungary. Juraj has ensured the deers’ shape remains recognisable, and the sense of movement is well captured. 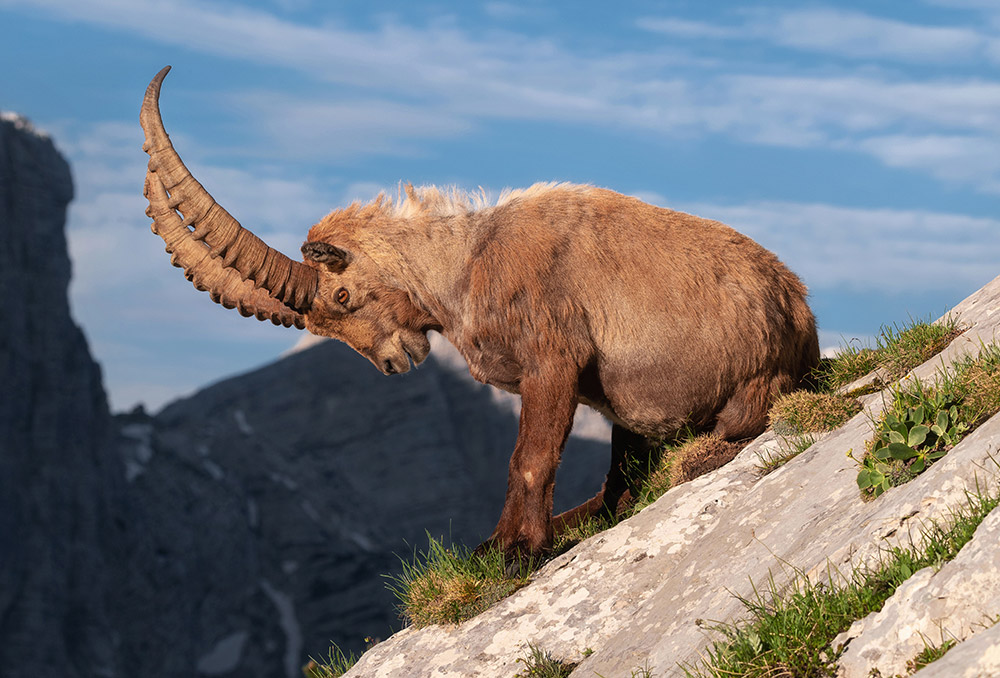 This magnificent ibex, photographed in the Julian Alps in Slovenia, almost appears to be posing for Ales’s camera. The image is a great reflection of the animal’s sheer presence and charisma, and the angles of its horns balance very nicely with that of the mountainside and peaks beyond. And despite it being so small in the frame, there’s no getting past that beady eye. 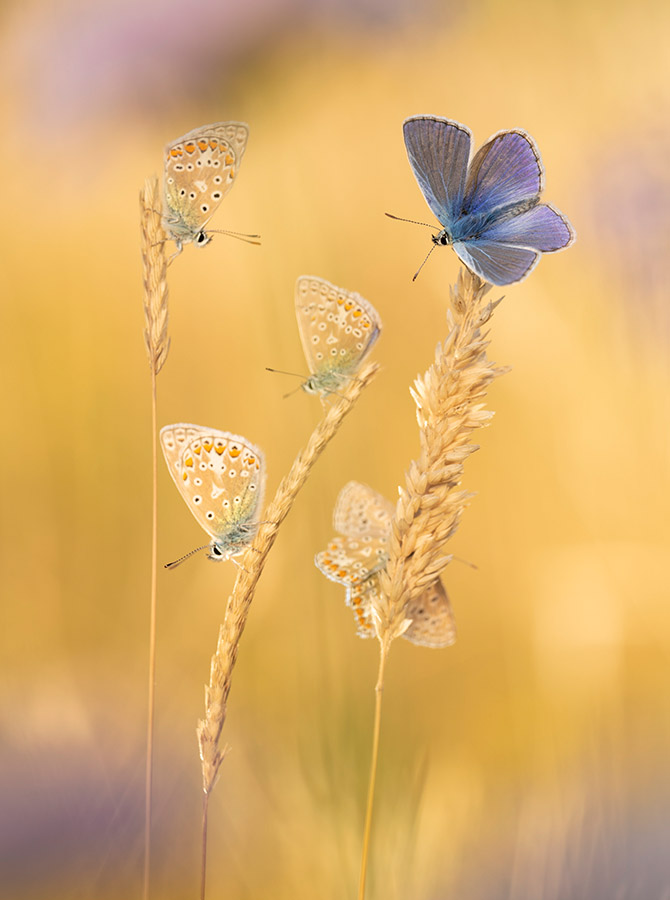 Guest judge Tesni Ward says: ‘The colour and ambience on this image is fantastic, with quintessential golden morning hues and great separation between the foreground and background, which adds depth and perspective. The foreground blue hues add a variety of colour, matching the main butterfly but also acting as a natural frame, which helps to draw you into the image and keep you engaged.

The spacing between each butterfly is so perfectly done that it’s almost as if it was composed to show “X marks the spot”: you can definitely tell a lot of thought went into the overall composition. I feel as if this image wouldn’t have had the same impact if all five butterflies were all seen from the bottom or with their wings closed as that vibrant blue on the top right butterfly really draws you in but also shows you the variety of colours on this beautiful species.’ 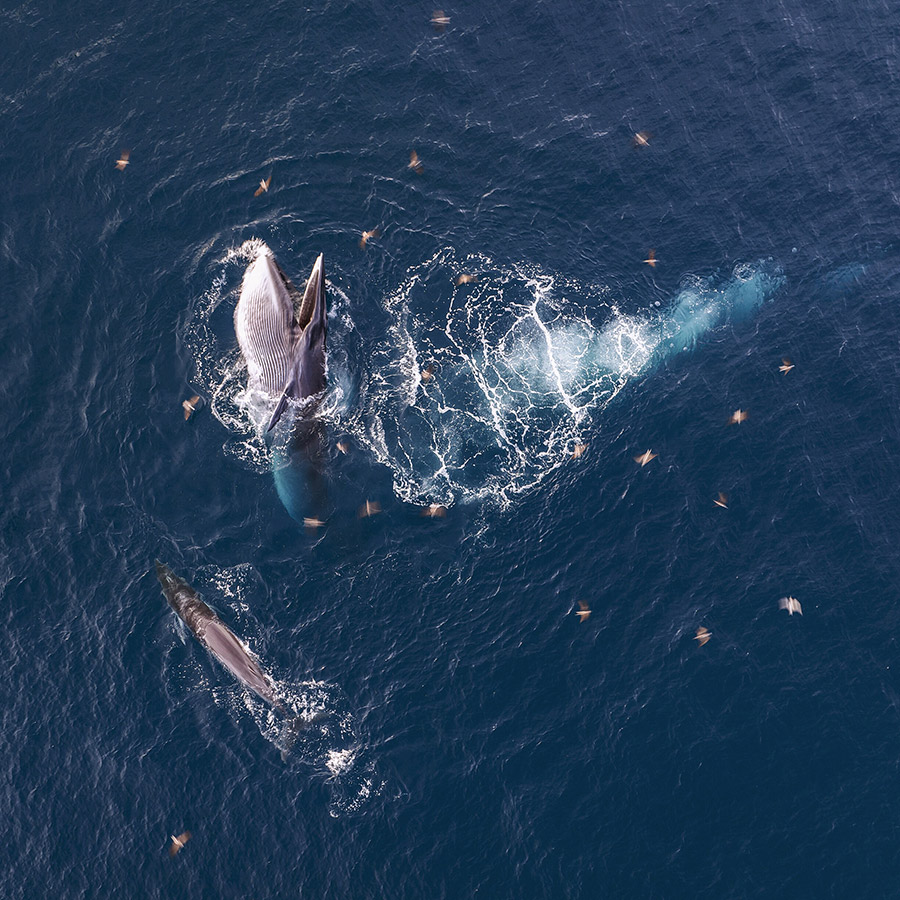 This magnificent female Bryde’s whale and her calf are seen here hunting for their next meal. A drone is the perfect tool for capturing their power and strength, with the ripples moving outwards giving structure to the composition. The circling birds, hoping for an easy meal, help give a sense of scale and additional movement. 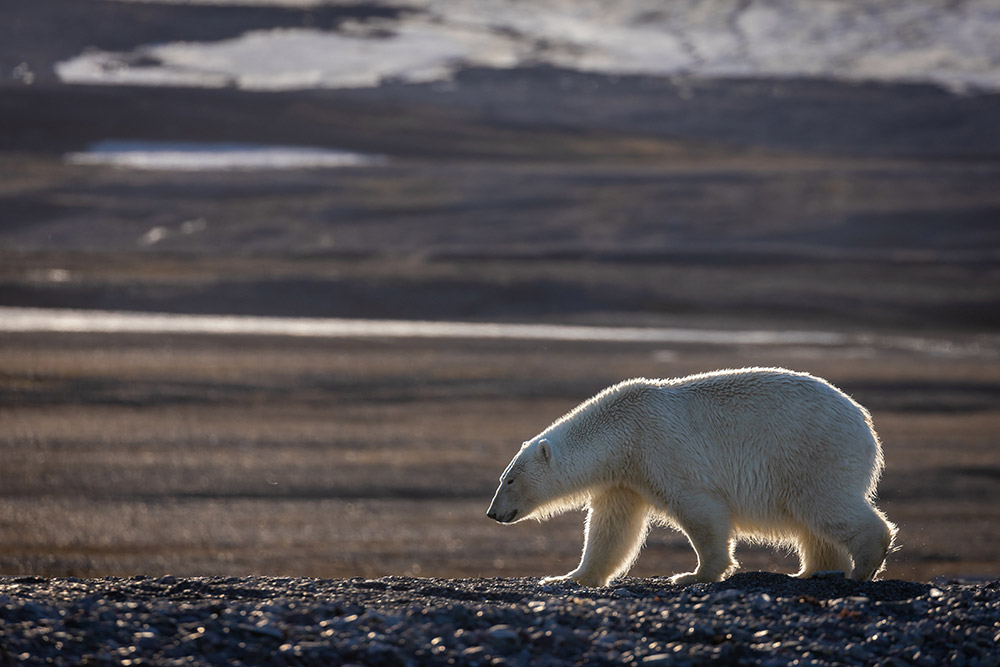 This is a quiet image of a polar bear in Svalbard, but a very effective one. What makes it, of course, is the light. The halo that outlines the stately creature gives it dimension and depth. Without it, the picture would have been somewhat ordinary. Depth of field is spot on, giving context to the animal’s surroundings and painting a picture of its environment, but our attention still goes directly to the bear. The viewer is left wondering where it has been and where it is going.

Lynn was also our highest camera club scorer for this round! 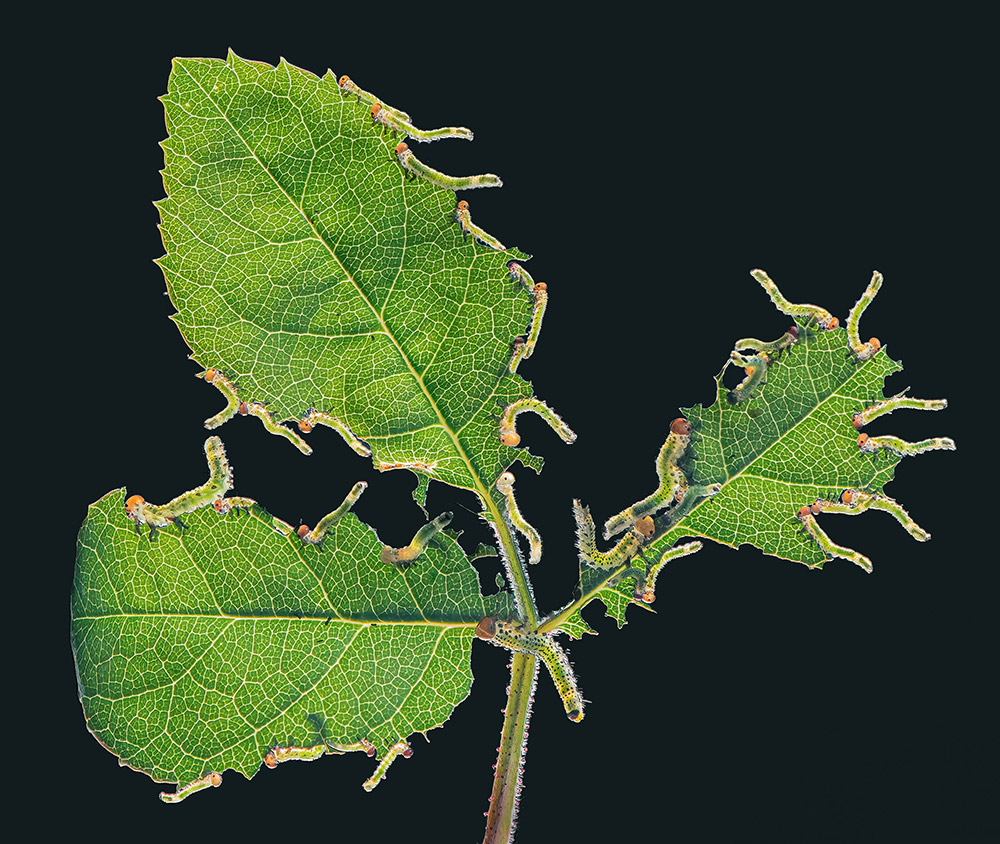 Sawfly larvae aren’t everyone’s idea of an appealing subject, but Tony has captured them doing what they do best – munching through a rose leaf. Photographing them backlit against a dark background makes them stand out very sharply, and brings out the detail not only of the larvae themselves
but also of the damage they are doing. An imaginative and unusual image. 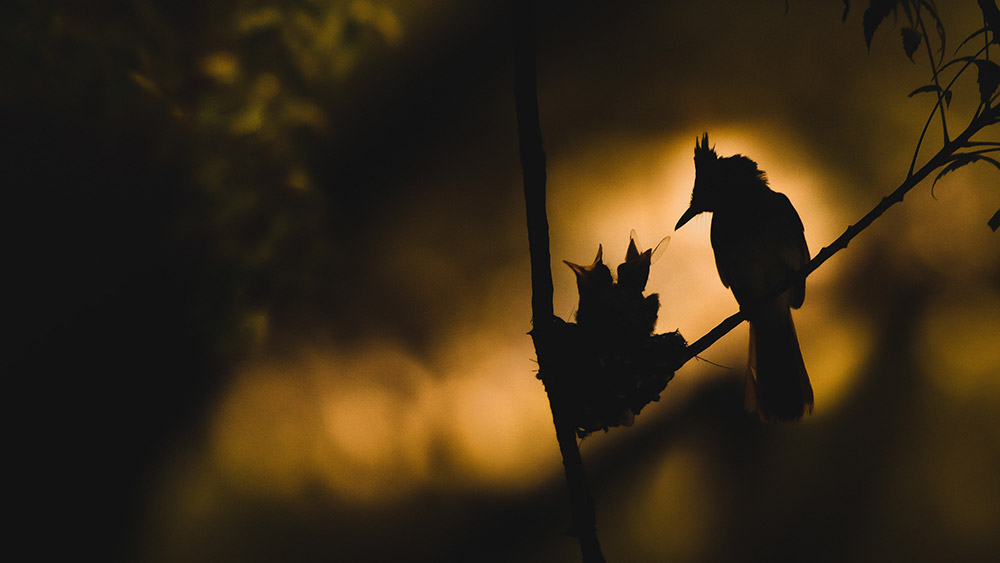 Google the Indian paradise flycatcher and it’ll turn up images of a gorgeously jewel-coloured bird, with sapphire-blue feathers on their head and orange wings and tail. So for Vinay to photograph one in silhouette is a bold move indeed – and it’s one that has paid off handsomely. Reducing the scene to tones of gold and bronze ensures our attention stays with the bird and its open-mouthed young, while the darker areas at the edges help create a pleasing frame. Waiting until the adult bird has turned to the side is crucial to the success of this atmospheric shot. 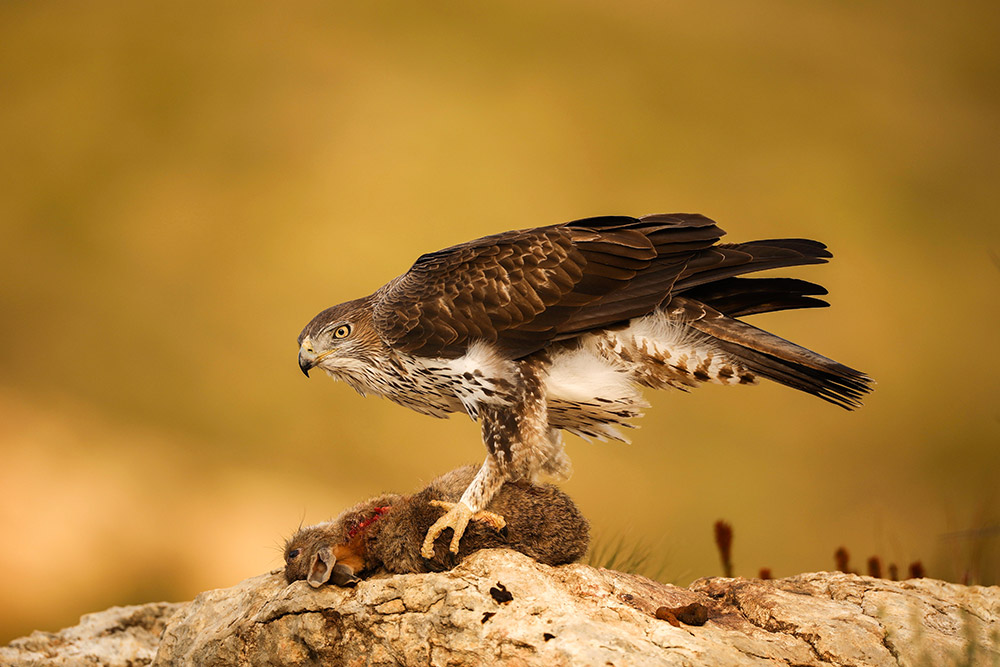 Edward has captured an excellent shot of a bird of prey with its latest meal. Focusing is superb, and really makes the most of the bird’s sharp, yellow eye. The golden tones throughout the image are very pleasing, too. Edward wins ten points for Reigate Photographic Society with his shot, which was commended.

The APOY 2022 leaderboards after Round Eight, Wildlife

With only two rounds to go in this year’s competition, it’s tighter than ever. Anyone currently in the top ten stands a chance of a final surge and making it to the overall top place. With as many as four photographers in joint sixth spot, who knows what the final leaderboard might look like?

Young APOY is similarly close, and again, it’s possible we could see some significant changes in the leaderboard as the competition reaches its closing stages. With everything to play for, none of the entrants can afford to slack off just yet. The camera clubs result is looking rather more cut and dried, with Launceston Camera Club romping away in first place.

The gear our APOY 2022 wildlife winners used can be found at MPB.

Taking first place, Gill Evans shot her winning image using the Nikon D500. Launched in 2016, the AP review said, ‘its combination of superb autofocus, fast continuous shooting and excellent image quality places it very much at the top of the list’. The APS-C DSLR features a 20.9MP CMOS sensor, ISO range of 50-1,640,000, 10fps shooting speed and 153 AF points. This excellent camera can be found at MPB for between £729 and £1,029. 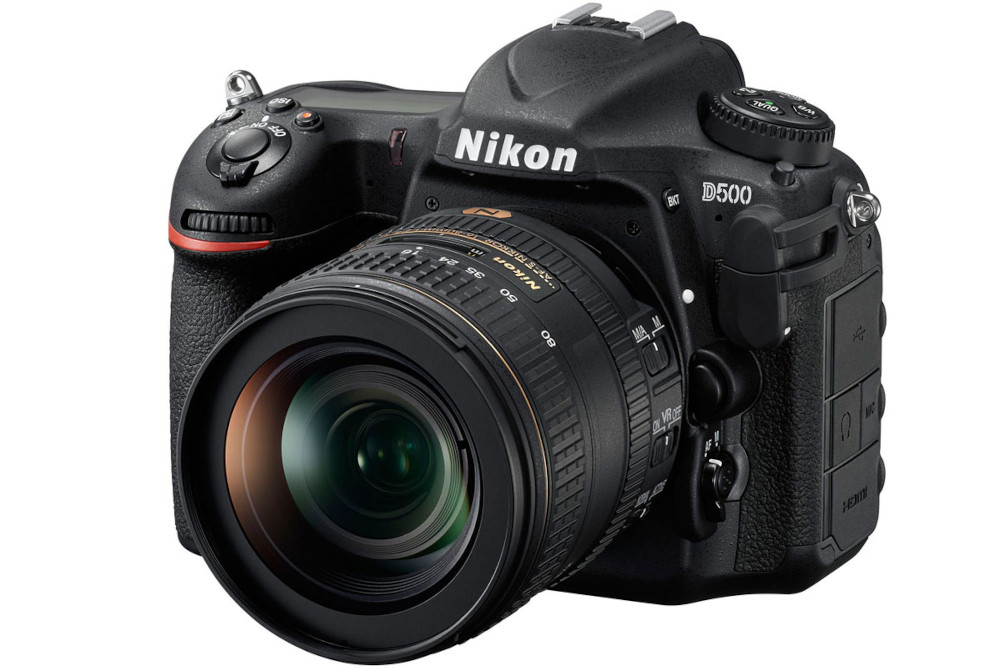 In seventh place, Daniel Rossi captured his ethereal image using a Sony A7 IV. This full-frame mirrorless camera was launched in 2019 with a new 33MP sensor and can shoot at 10fps. When reviewed in AP it was described as having ‘superb autofocus with extremely capable subject recognition’ and as being ‘one of the highest-spec’ed models in its class’. Pick up this model at MPB in like-new condition for £2,239. 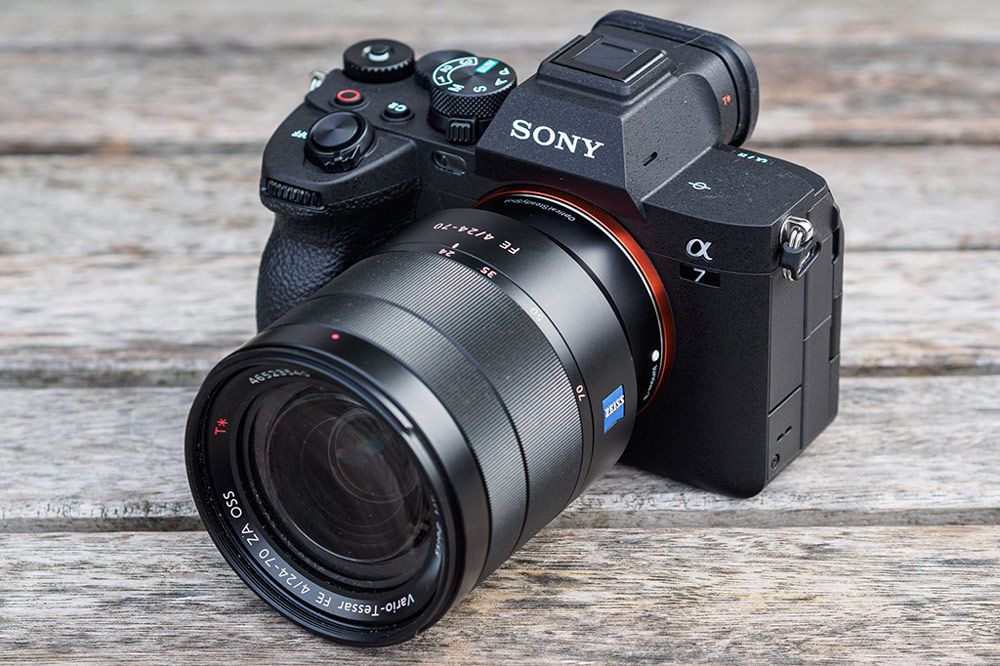 Lynn Pascoe shot with a Canon EF 100-400mm f/4.5-5.6L IS II USM. Launched in 2015, this lens is aimed squarely at wildlife photographers. It weighs 1,640g, features four stops of Image Stabilisation and is capable of extremely fast autofocusing. It’s also weather resistant and features a rugged magnesium body. It can be used on APS-C-sensor DSLRs to give a focal length equivalent to 160-640mm on full frame. This superb lens can be found at MPB for between £1,089 and £1,549, depending on condition. 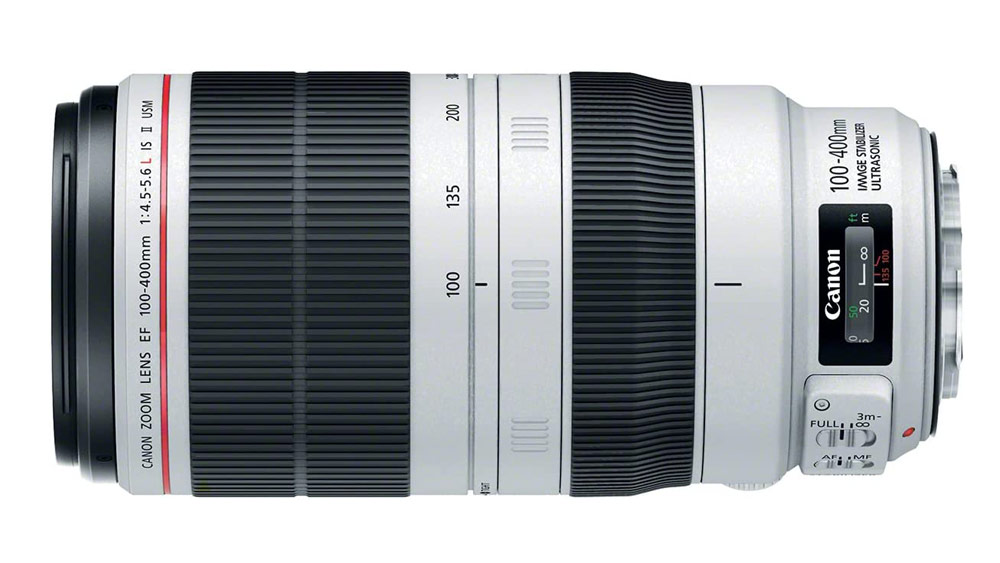 Winners of APOY 2022 Close-ups round revealed!